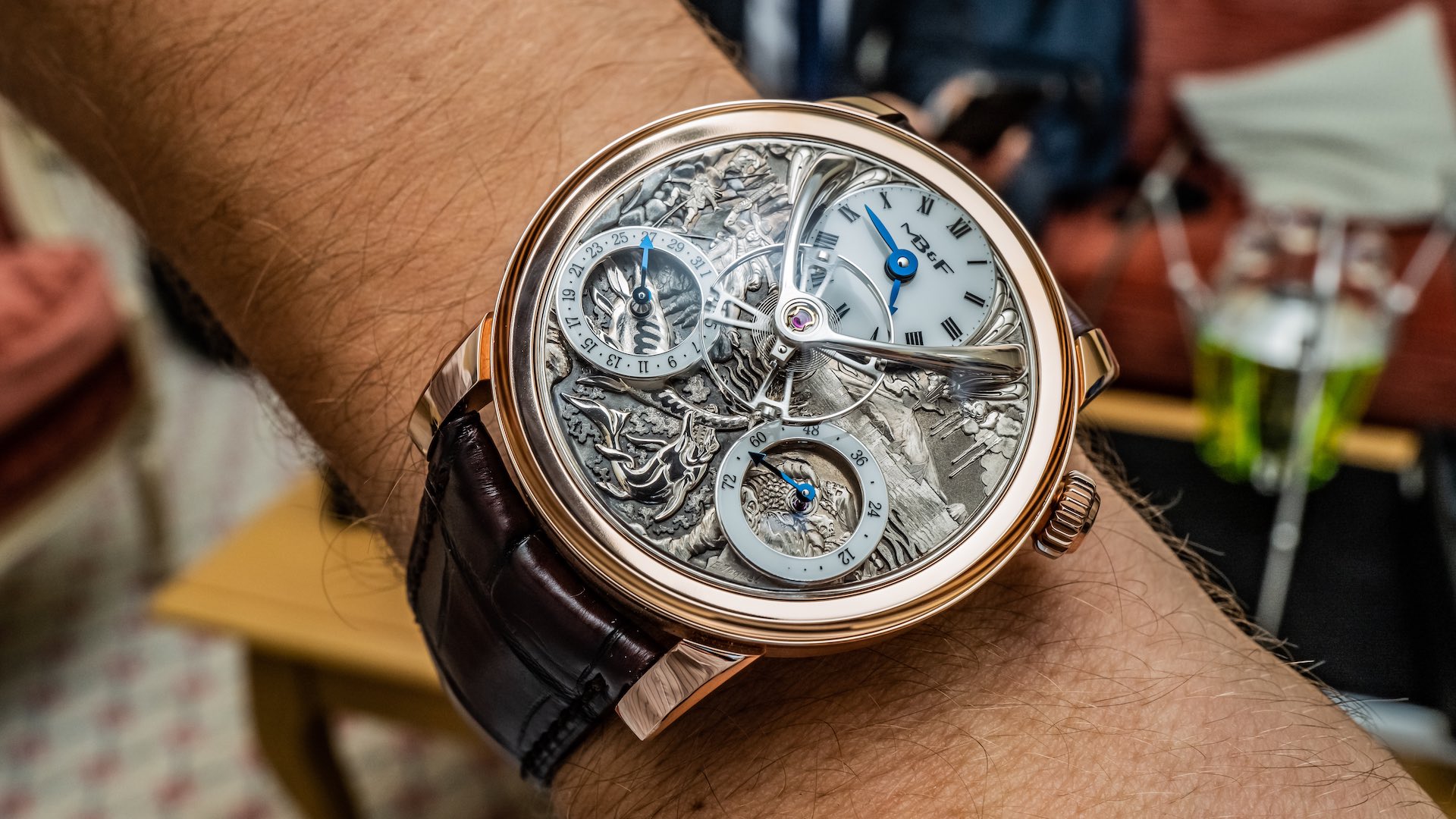 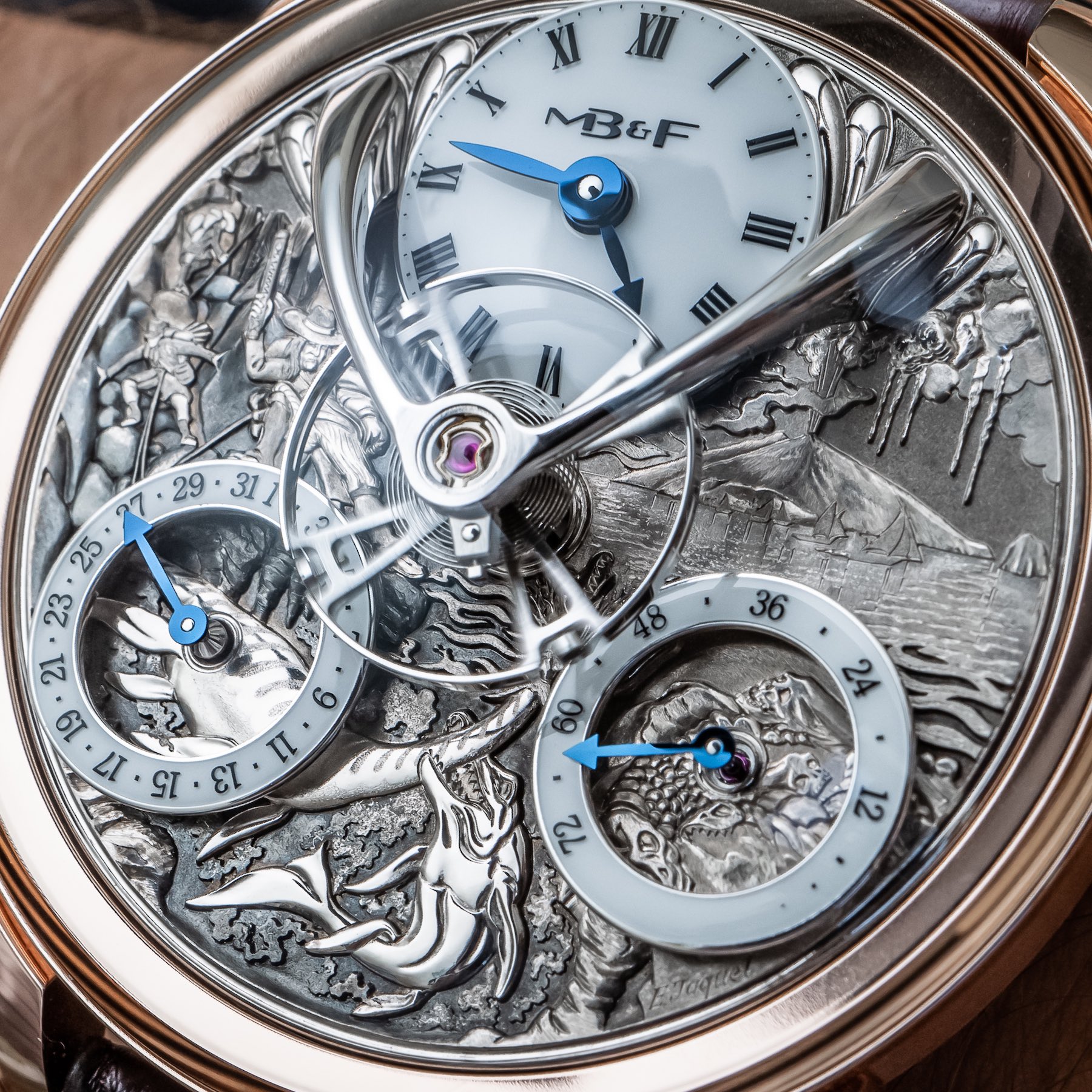 As a highly limited set of just eight pièce unique watches (that, as of writing, have already reportedly all sold out via pre-sales before launch), Swiss MB&F collaborated with master engraver Eddy Jaquet to create watches inspired by the worlds of legendary French science fiction writer Jules Verne (whose work has been the subject of many timepieces and helped create the steampunk aesthetic). The resulting classic-themed watches are called the MB&F LM (Legacy Machine) Split Escapement x Eddy Jaquet pieces, and each comes in a case which is produced from 18k red gold.

Eddy Jaquet grew up in Neuchatel, which is not far from Geneva, where MB&F is based. The high-end maker of horological (and legacy) machines is known for its inspired collaborations with fellow creators in the watchmaking space, but this is the first time the brand has worked with Eddy Jaquet to create scene-style hand-engraved dials. Jacquet is not the only engraver around, but he is particularly good. Not only does he focus on creating interesting, visually balanced compositions, but he also has excellent technique — not only in his ability to respect rules of proportions and geometry at such small scales but also in how he uses darkening techniques to draw one’s eye to the right places on the dial. 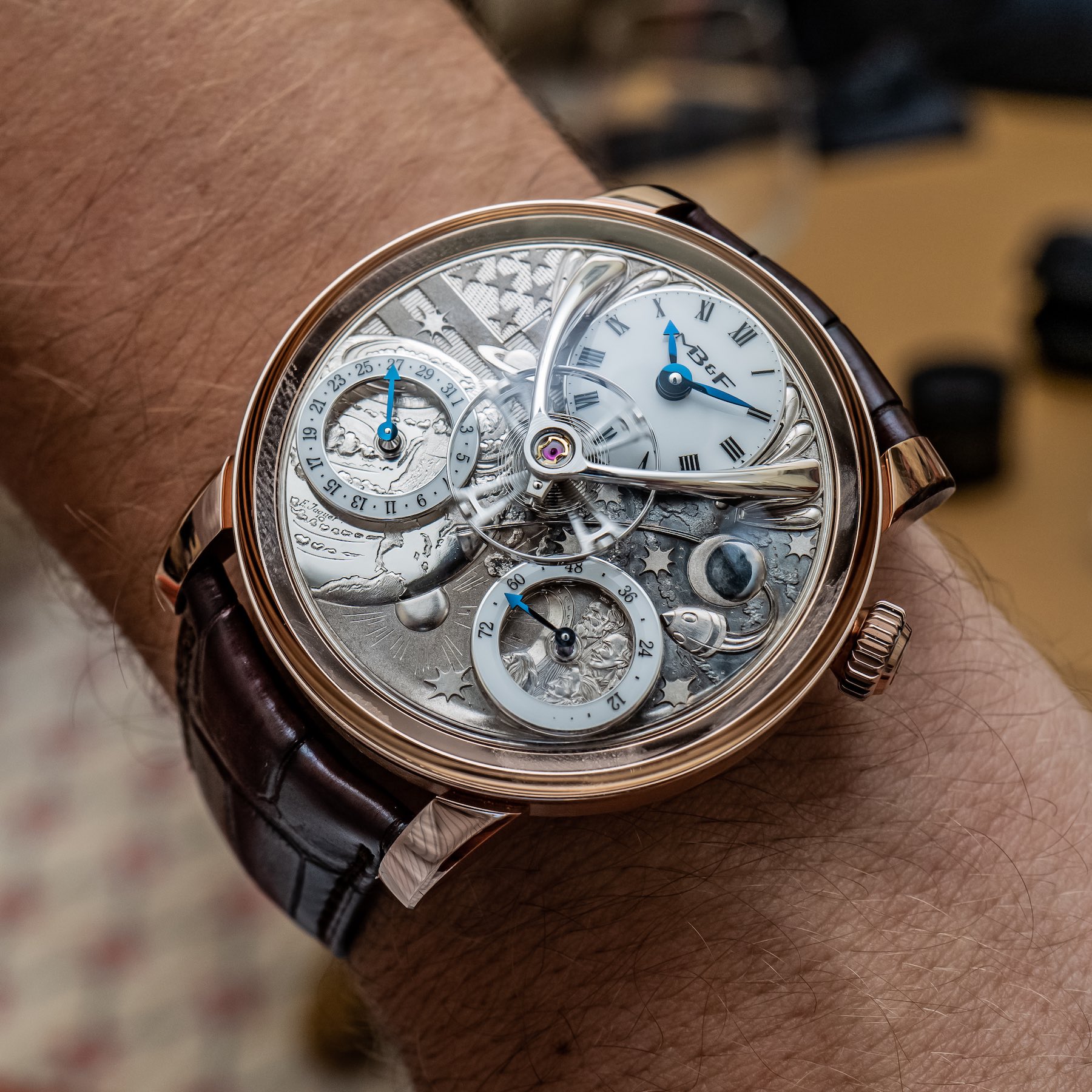 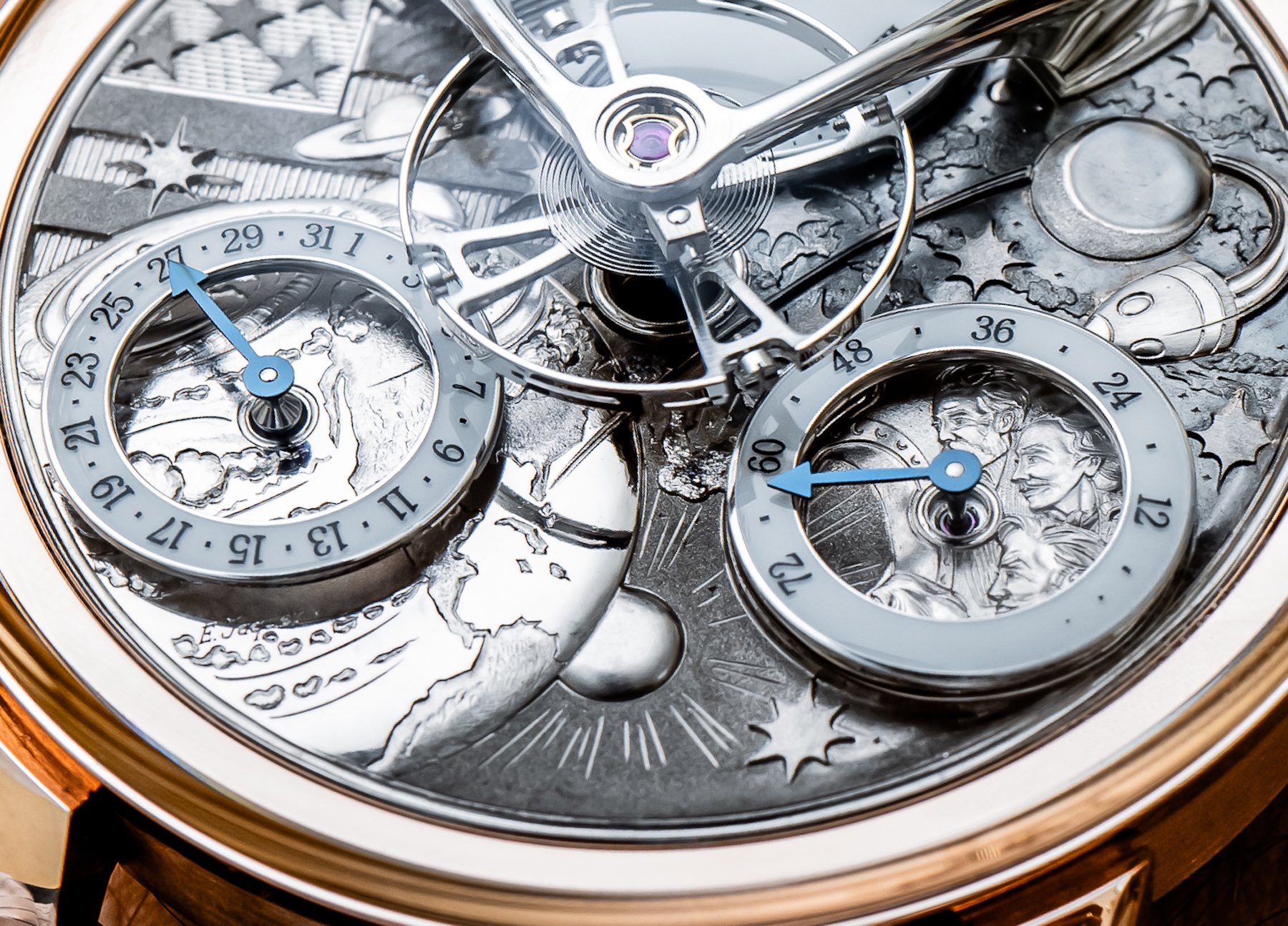 In a sense, these artistic watches are very different from what MB&F usually offers — mainly given that enough other high-end Swiss watchmakers have also done engraved dials frequently in the past. MB&F typically likes to be a bit more distinctive in its design approach. So, that is a legitimate observation of these watches. That said, MB&F rarely sells one-of-a-kind (versus small- production) watches, and its use of Eddy Jaquet as a collaborator is a clear sign that MB&F wanted the watches to be seen as a superlative example of the art form. 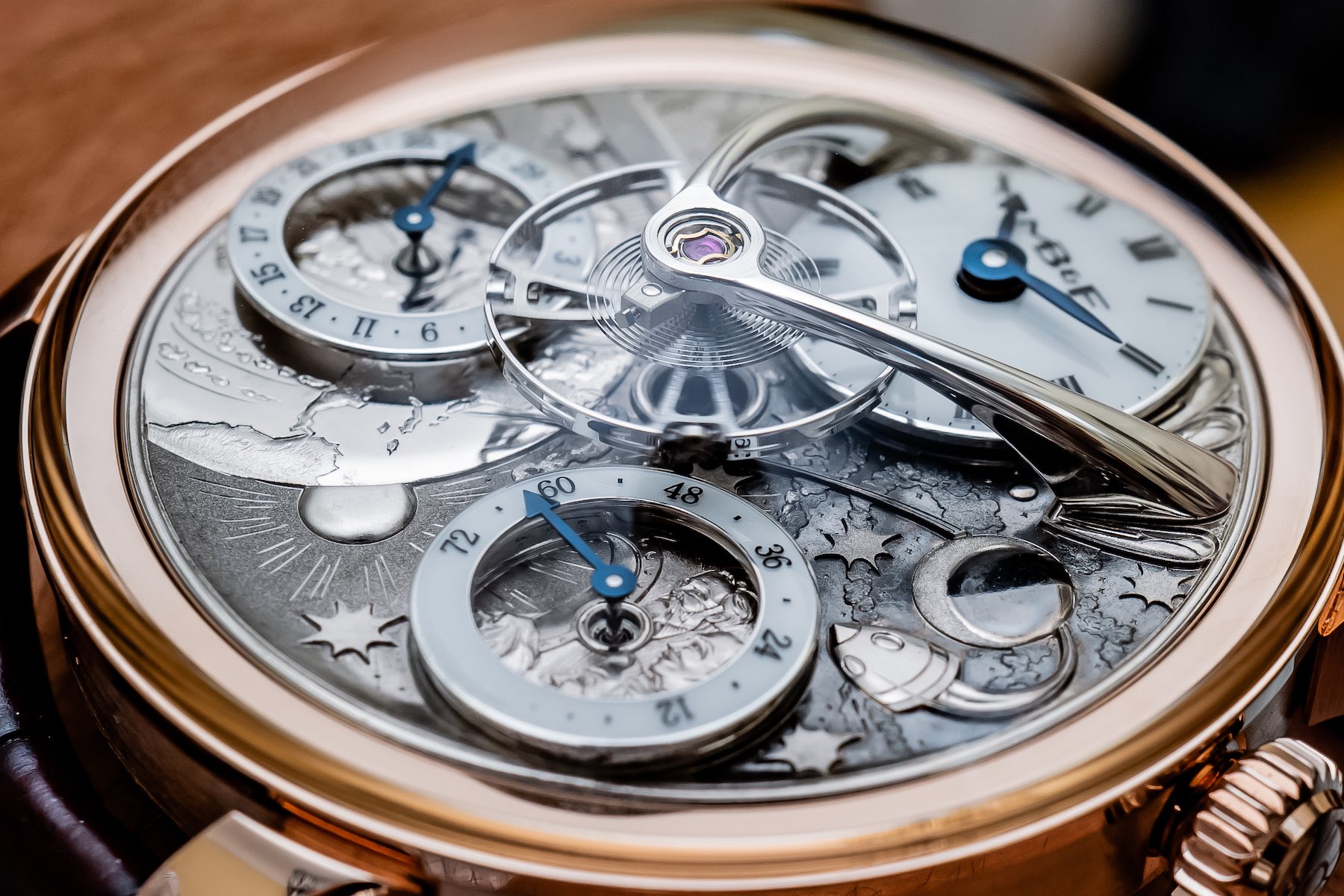 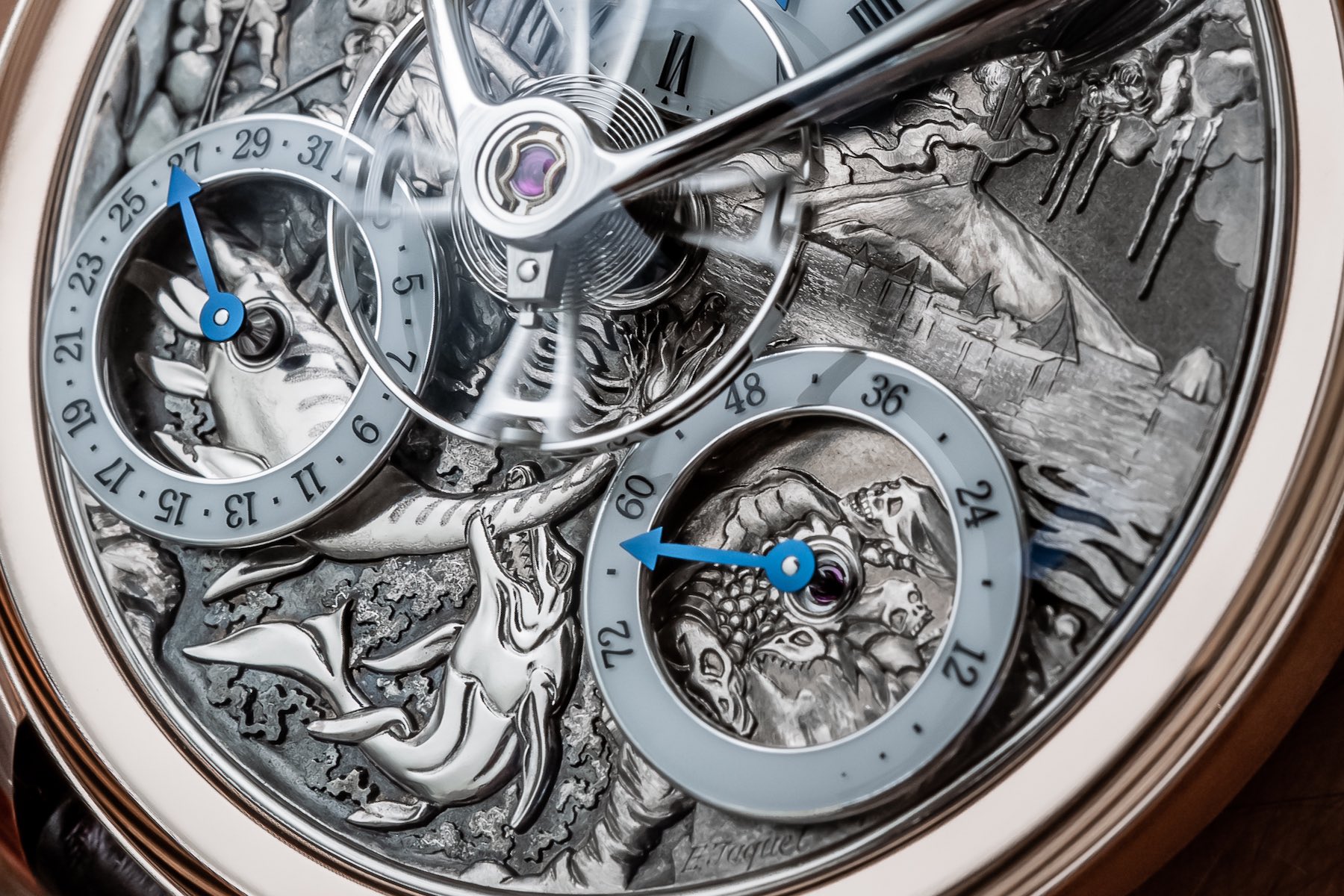 Each of the dials is inspired by a specific Jules Verne work, and the scenes include imagery associated with the particular Jules Verne story that it was based on. The books that inspired the MB&F x Eddy Jaquet LM Split Escapement dials are: 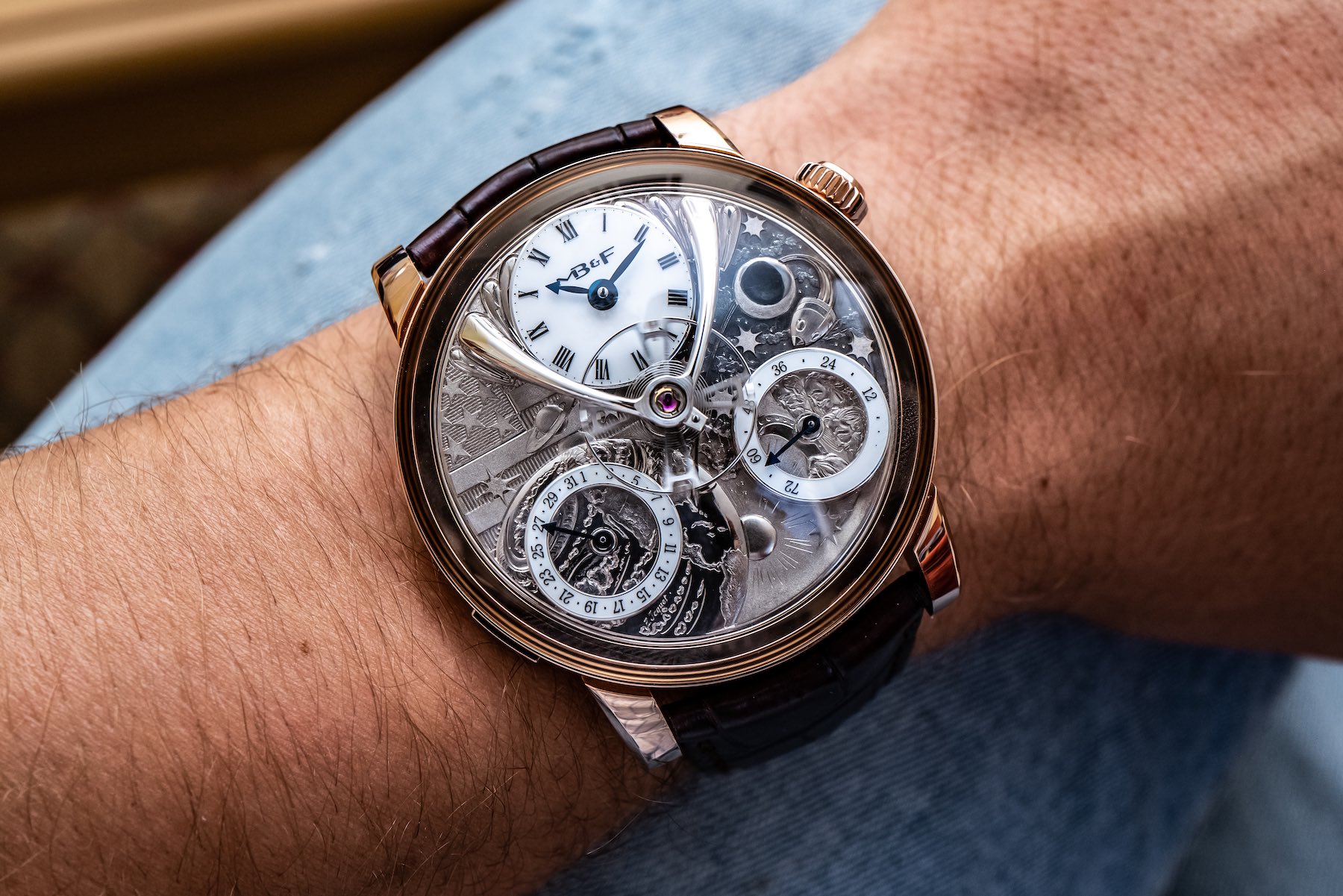 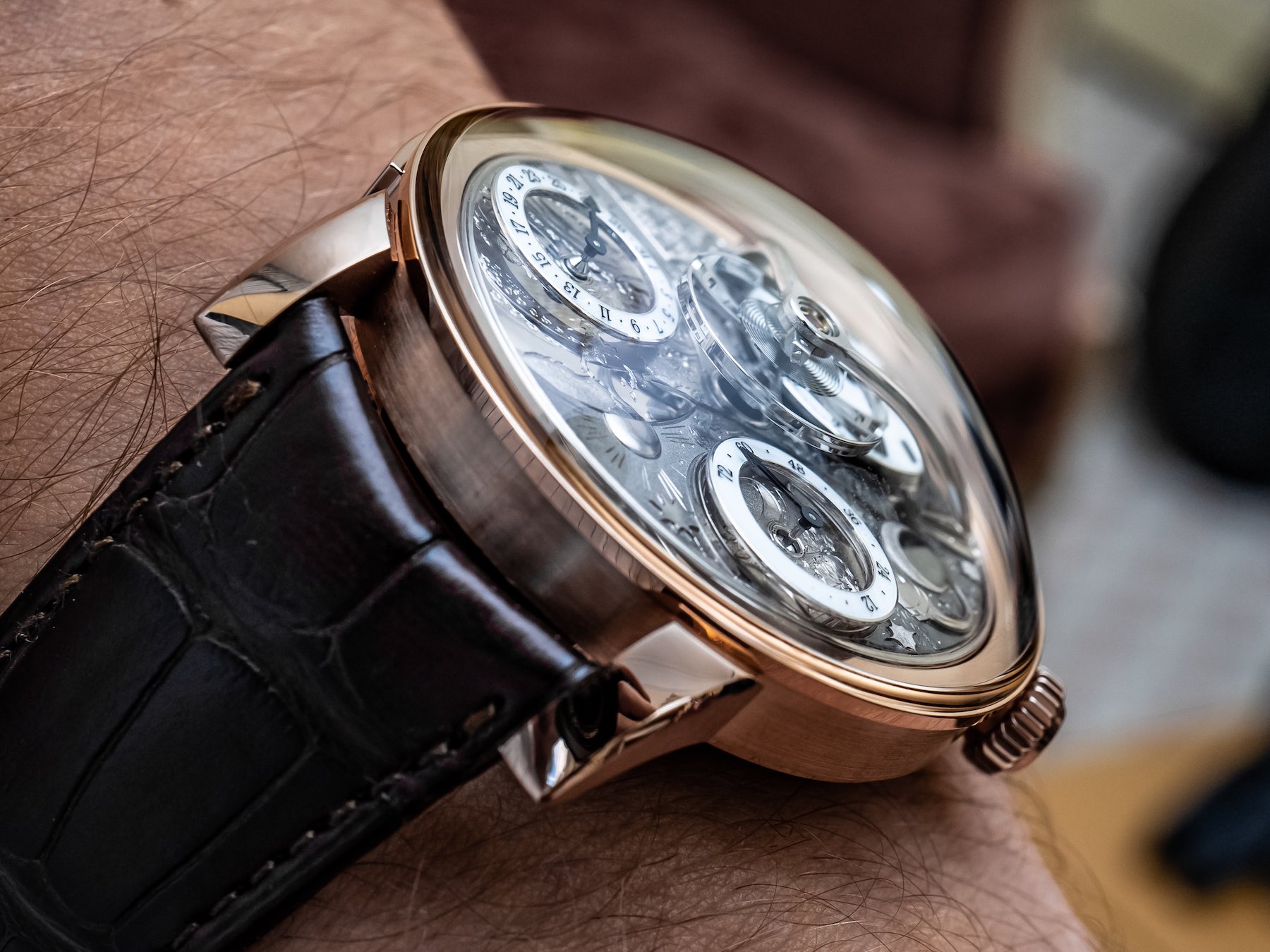 aBlogtoWatch’s David Bredan was able to get some wrist time with the watches when meeting with MB&F in Geneva recently. You can see the stunning visual impact that these dials make, especially given the “palette,” which is the LM Split Escapement dial. The base watch is MB&F current “core” collection model in the Legacy Machine family, which replaced the LM1. The Legacy Machine (LM) Split Escapement (more information on aBlogtoWatch here) is 44.5mm-wide with a time-date-power reserve movement developed by Stephen McDonnell for MB&F. The beautiful movement features an escapement which is “split” from the rest of the movement and that hovers over the dial being suspended on a bridge. The regulation system operates at 2.5Hz (18,000 bph) and has a power reserve of 72 hours, being produced from 296 parts. 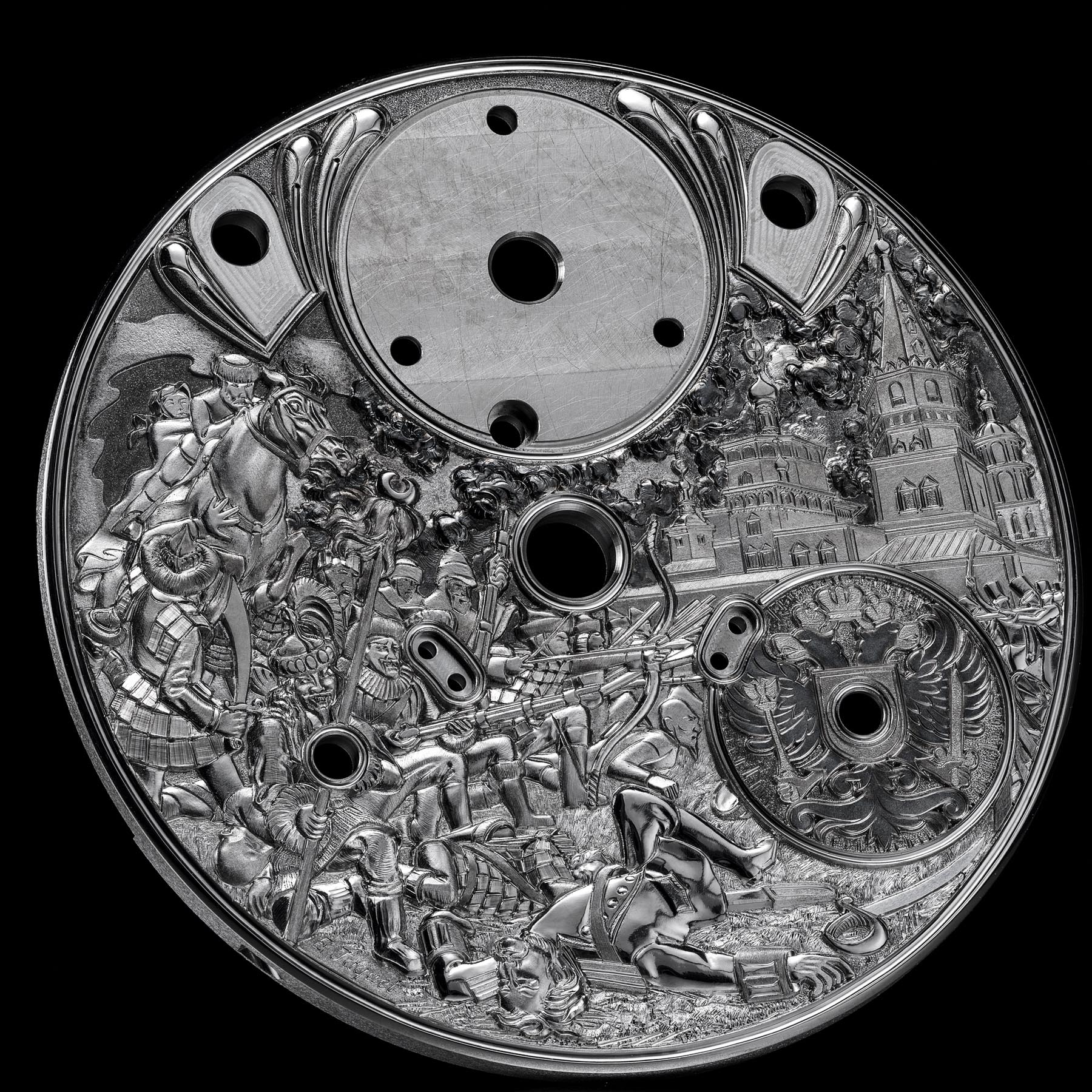 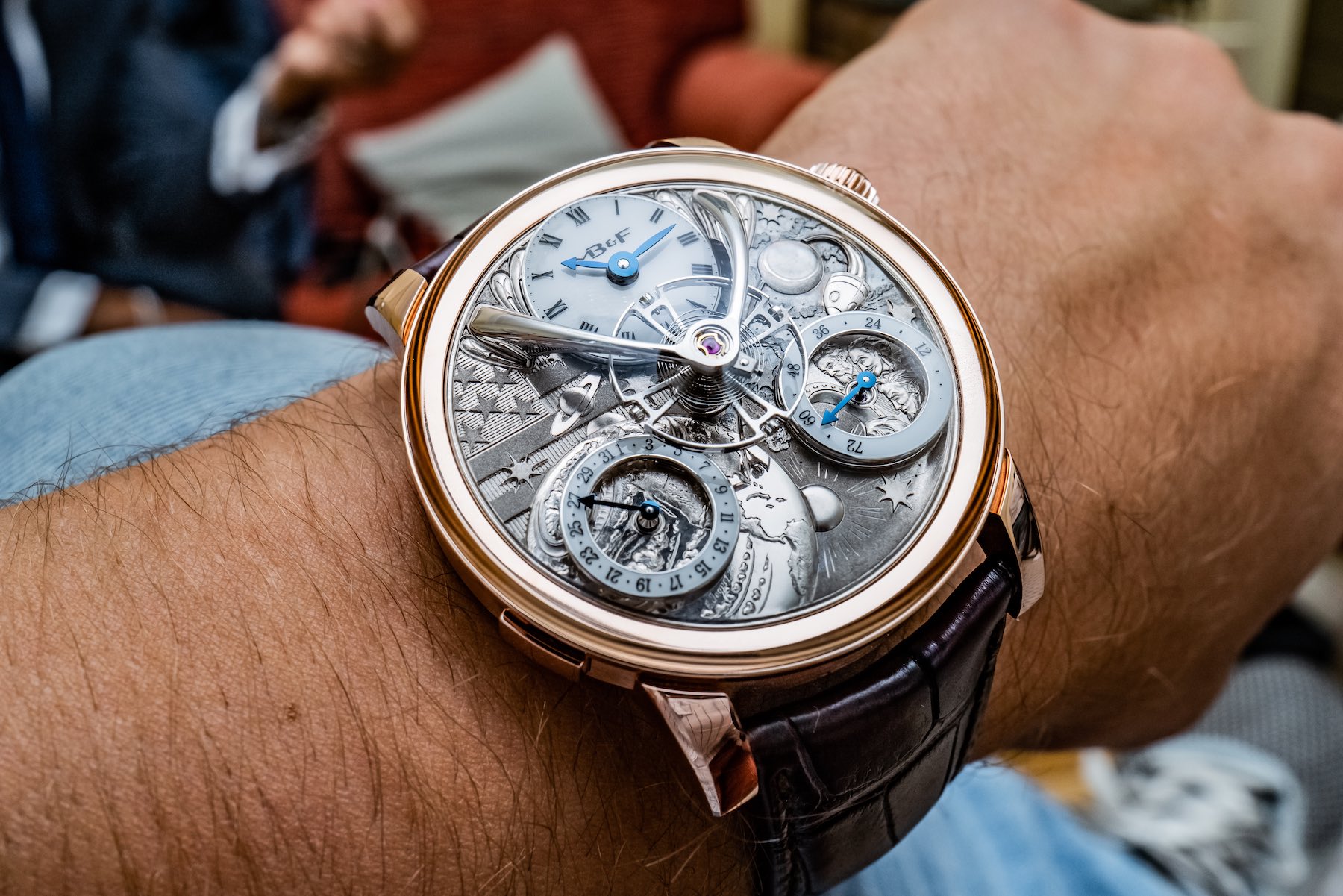 Legacy Machine watches is where MB&F can be a bit more traditionally artistic, and it is a pleasure to see the work of Eddy Jaquet being so nicely manifested in an MB&F. Fans of the brand who mainly like their Horological Machines might feel that there isn’t enough technically unique about this new collection, but as MB&F points out, “This is an artistic exercise.” That it is. Prices for the (now sold-out) MB&F LM Split Escapement x Eddy Jaquet set of eight watches is 162,000 USD each. Learn more at the MB&F website here.