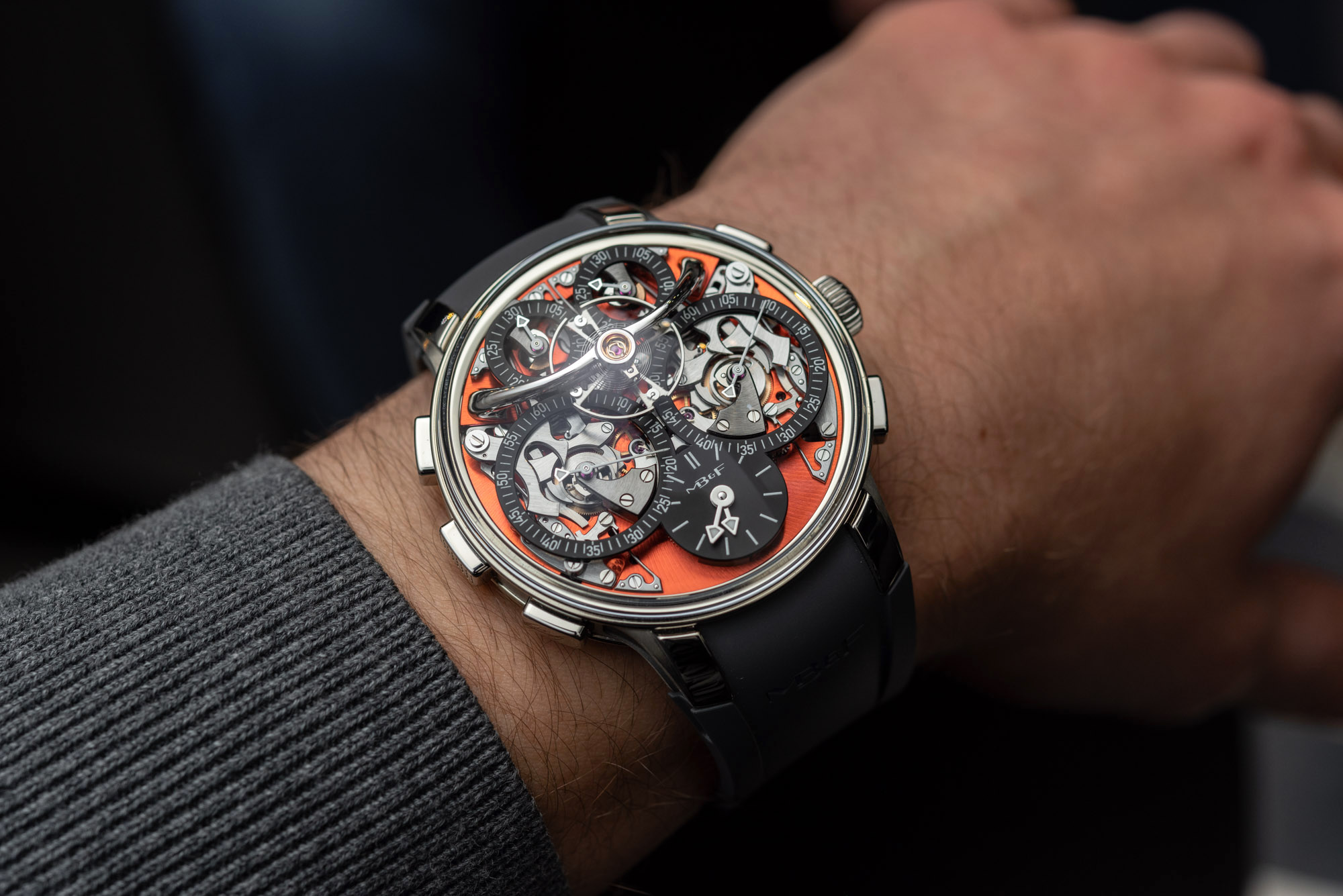 Did you know that MB&F has never made a chronograph? Having been bombarded with the brand’s out-of-this-world movement and watch design concepts, we wouldn’t judge if you hadn’t. We had to wait 17 years for the boutique watchmaker’s 20th caliber for an MB&F “stopwatch” to arrive, but it’s here now — and boy, was it worth the wait. Enter the MB&F Legacy Machine Sequential EVO, an inspired new take on the split-seconds chronograph that makes us wonder:

Why has no one thought of the chronograph in this way before? 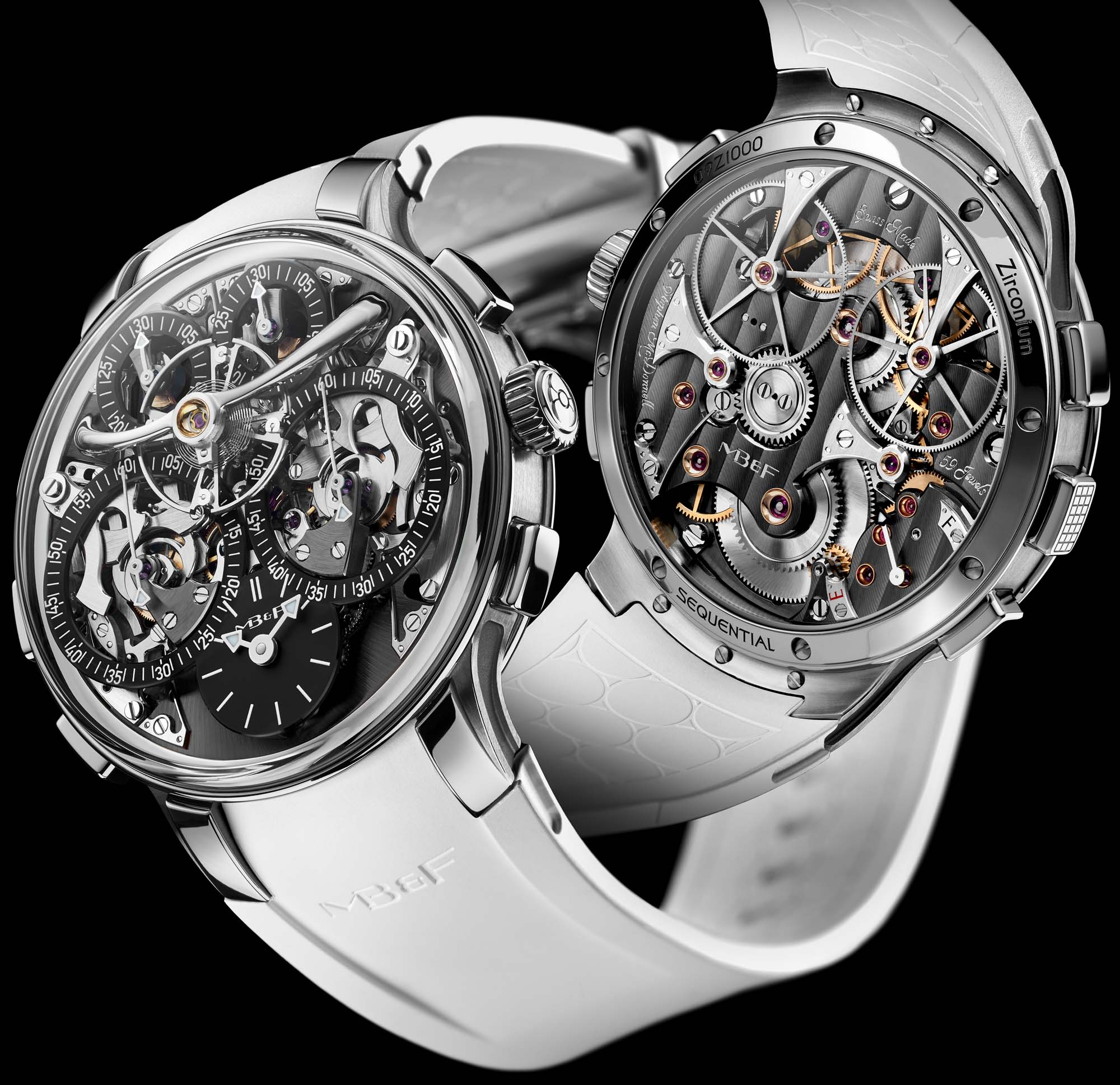 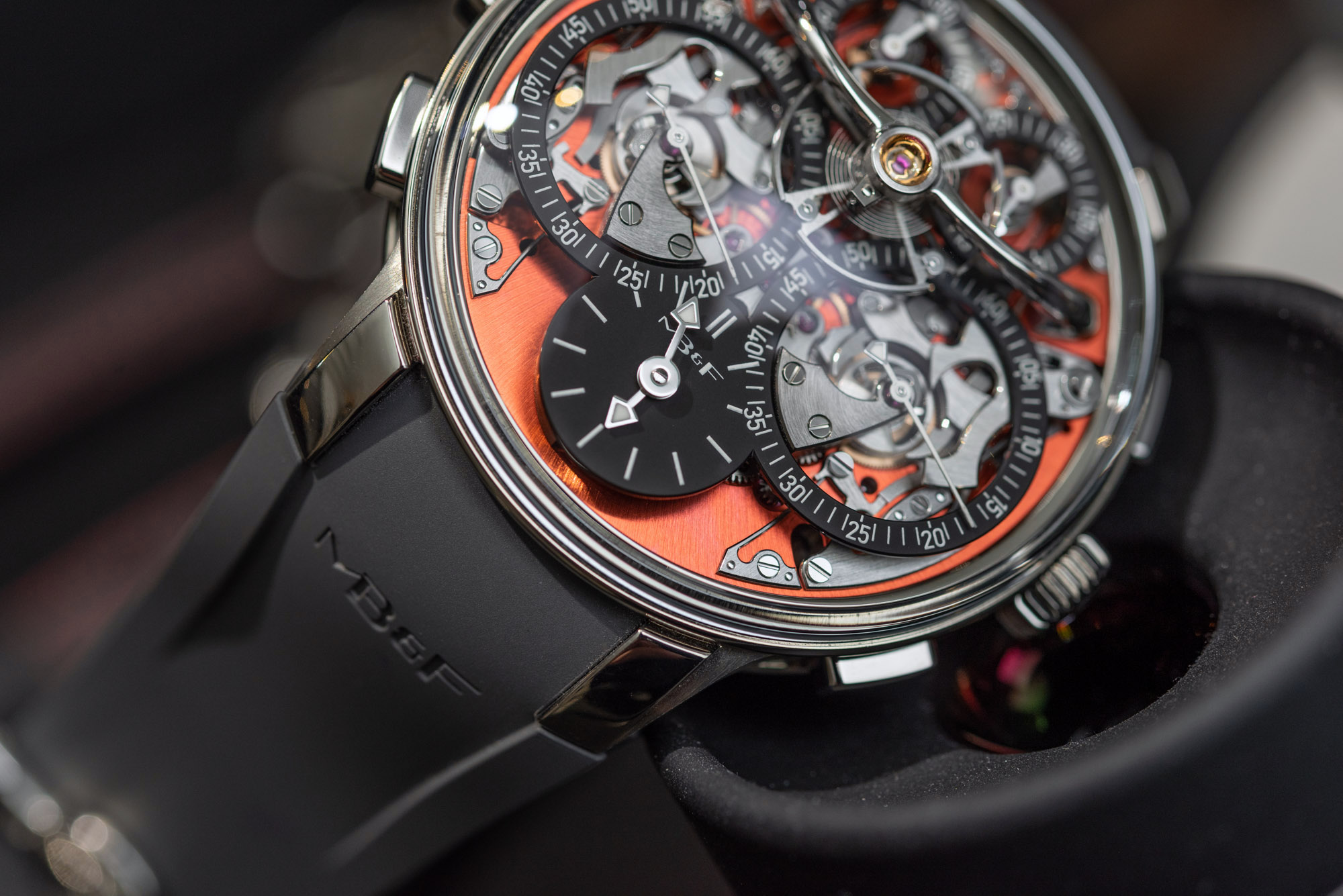 The chronograph is arguably one of the most competitive segments in all of modern watchmaking. Every year, we see much more than just a handful of highly innovative movements, time displays, dial layouts and additional functionalities, all centered around this age-old complication. The recipe is the same as we have seen with the MB&F Legacy Machine Perpetual Calendar, also conceived and designed by the same duo, founder Maximilian Büsser and genius watchmaker Stephen McDonnell. Their not-so-secret practice sounds simple enough: Instead of getting lost in the nuances of a complication, the chronograph in this case, the pair take a step back and look at the very essence of its functionality. What is it expected to do, and how can it perform most efficiently? As evidenced by his aforementioned Perpetual Calendar, and by this Legacy Machine Sequential EVO, McDonnell exhibits a unique talent even among master watchmakers and engineers of our time to re-think and simplify age-old mechanisms that have been universally implemented, largely unchanged, for hundreds of years by manufactures small and large. 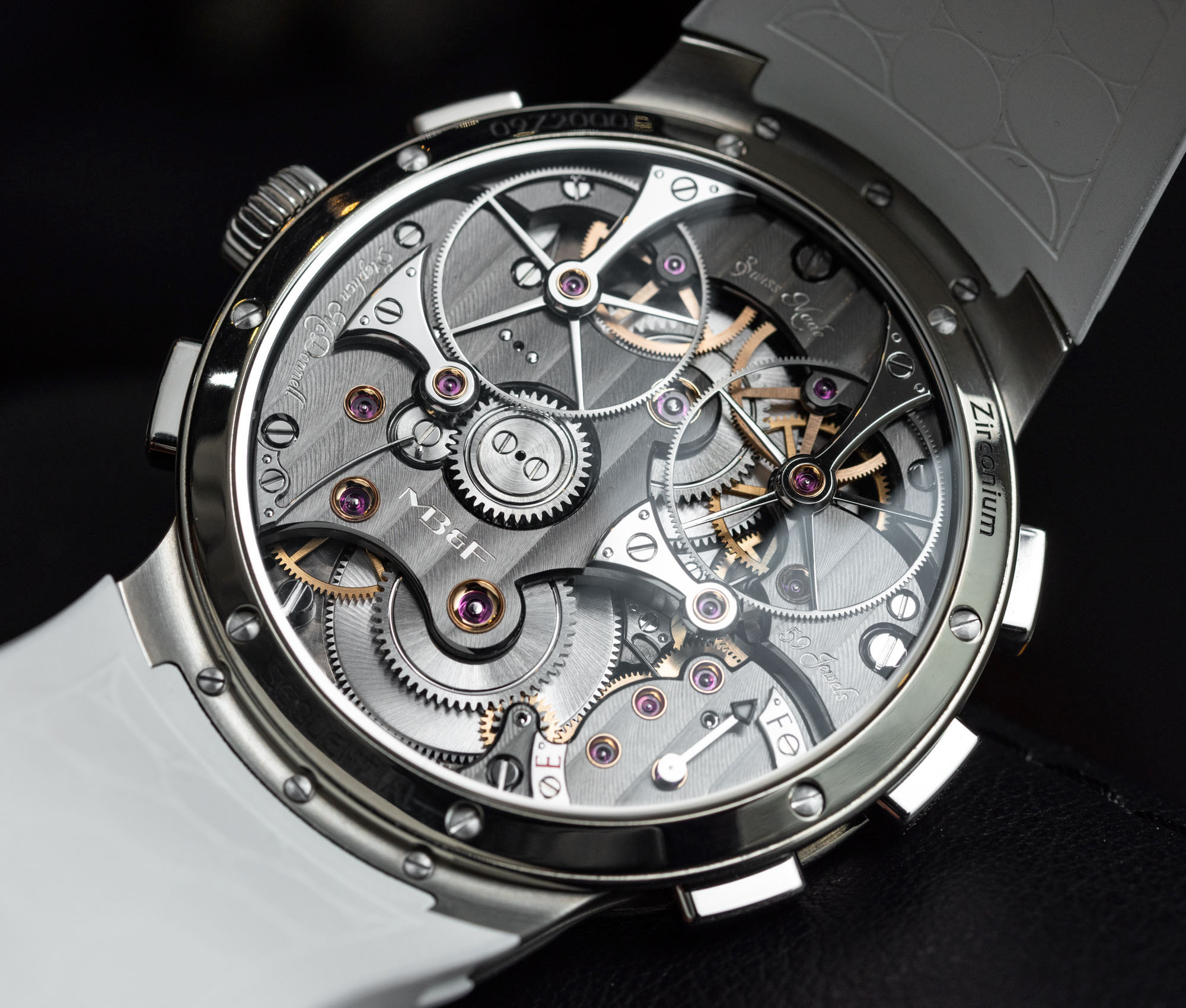 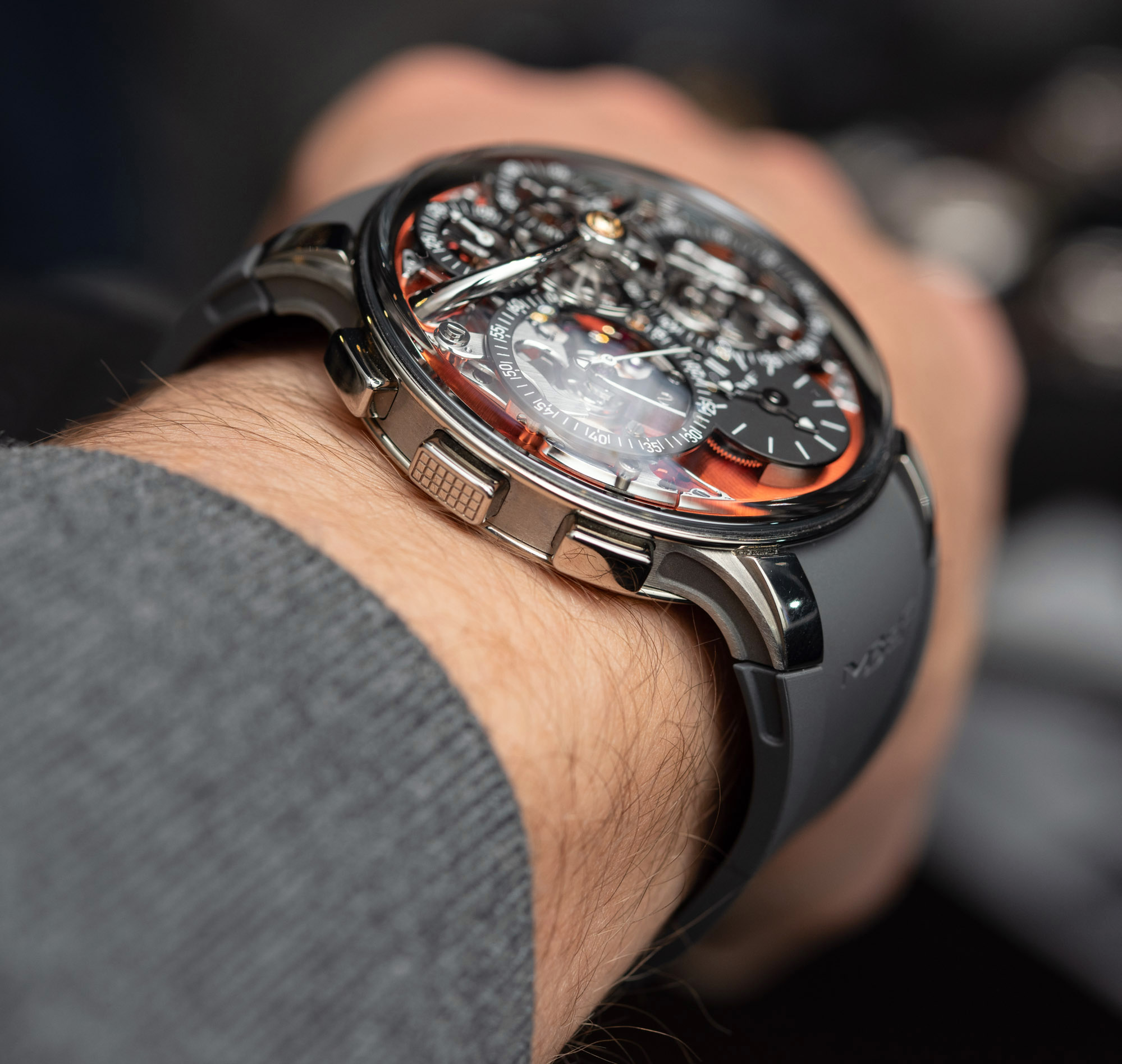 Let’s cut to the chase and dig into this world of 585 movement parts and 59 jewels – which is a lot. The MB&F Legacy Machine Sequential EVO’s list of features includes highly enticing stuff, such as two column wheels, a “Twinverter” binary switch, multiple timing modes (including split-seconds and a lap timer), real-world water resistance and a “FlexRing” damping system to protect against shocks and impacts. Oh, and it has a case made from… Nope, you guessed it wrong: Zirconium. 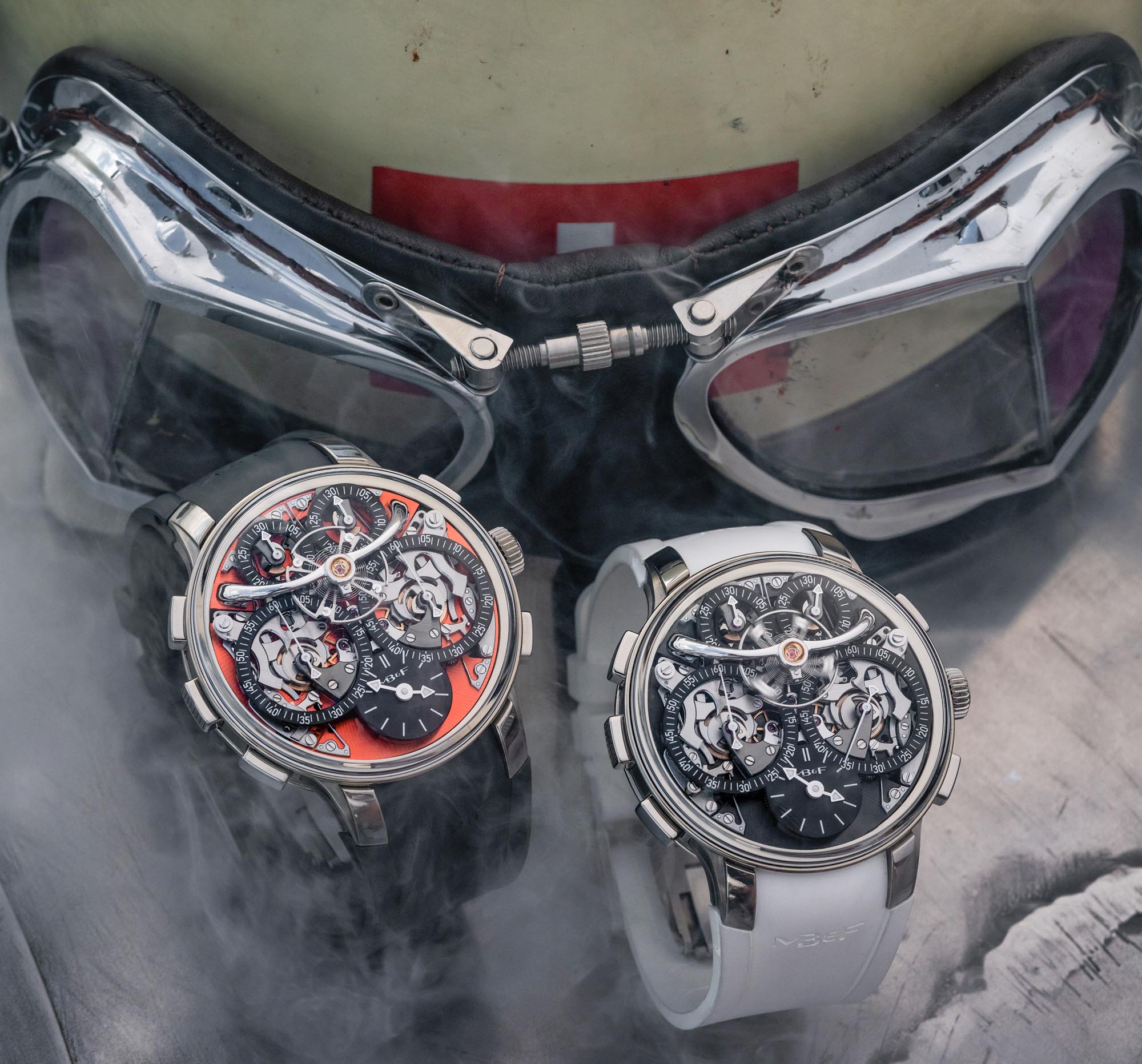 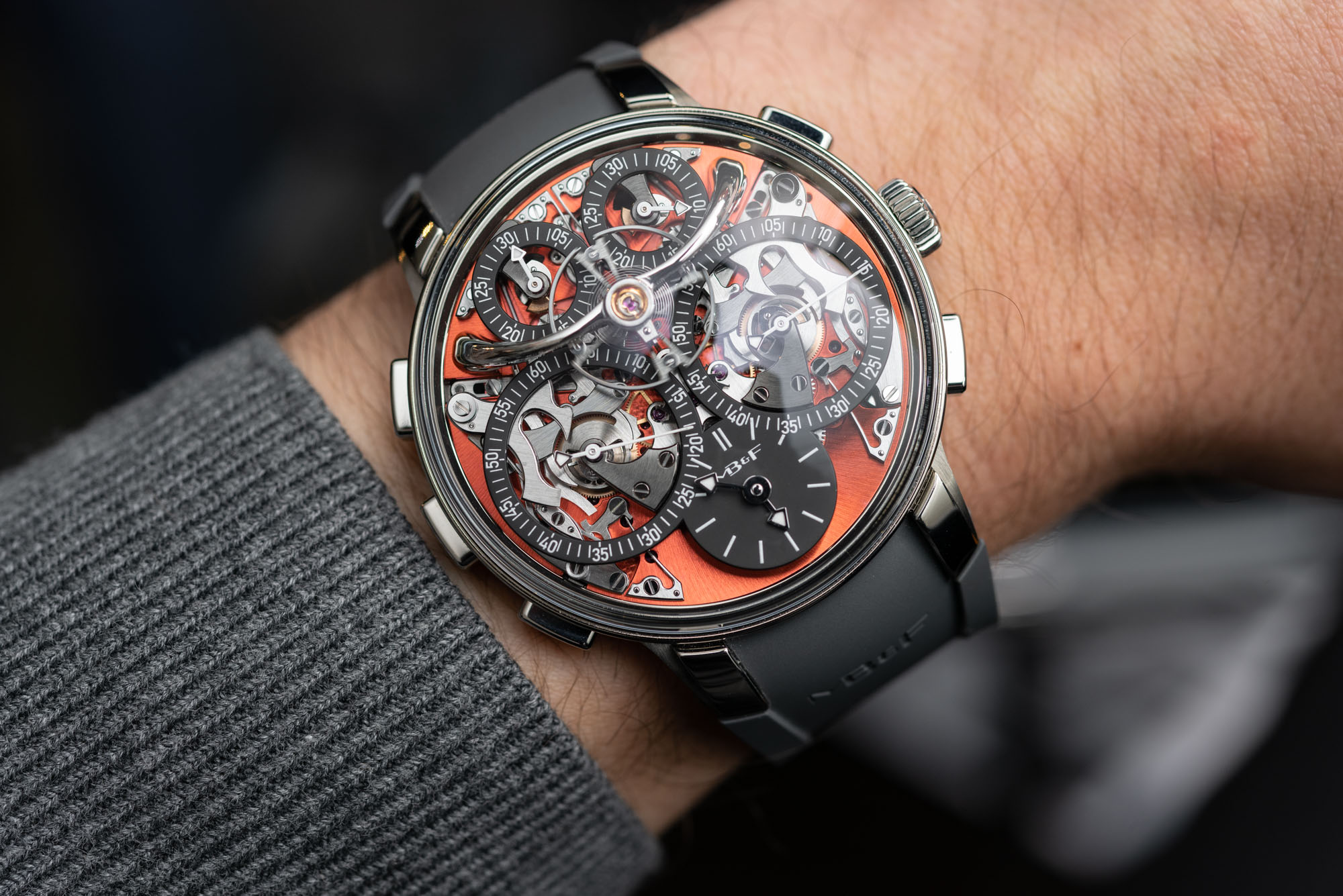 Once one manages to look away from that immensely complex arrangement of dials, hands, and watch movement parts, it becomes apparent that the usual two pushers have been overtaken by five(!) pushers protruding from the narrow and beautifully finished caseband, which hints at the unique functionality of the LM Sequential EVO.

Here’s how it works: There are two independent sets of seconds and minutes counters on either side of the face of the watch, and each of these chronograph displays can be started, stopped, and reset completely independently of each other, using the start/stop and reset pushers on their respective sides of the case. Simple enough. These need the two sets of two chronograph pushers, just as though there were two chronographs built into one watch. 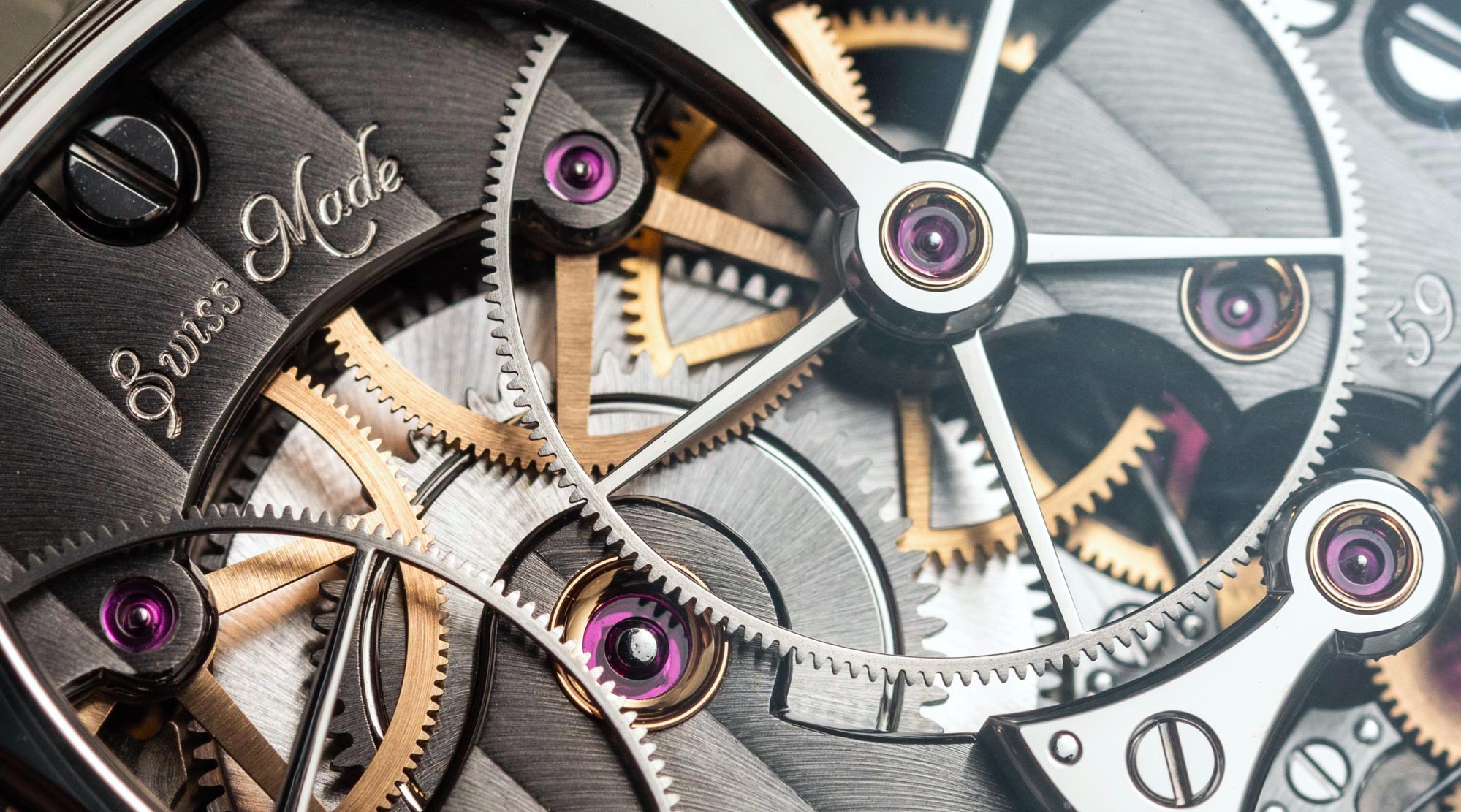 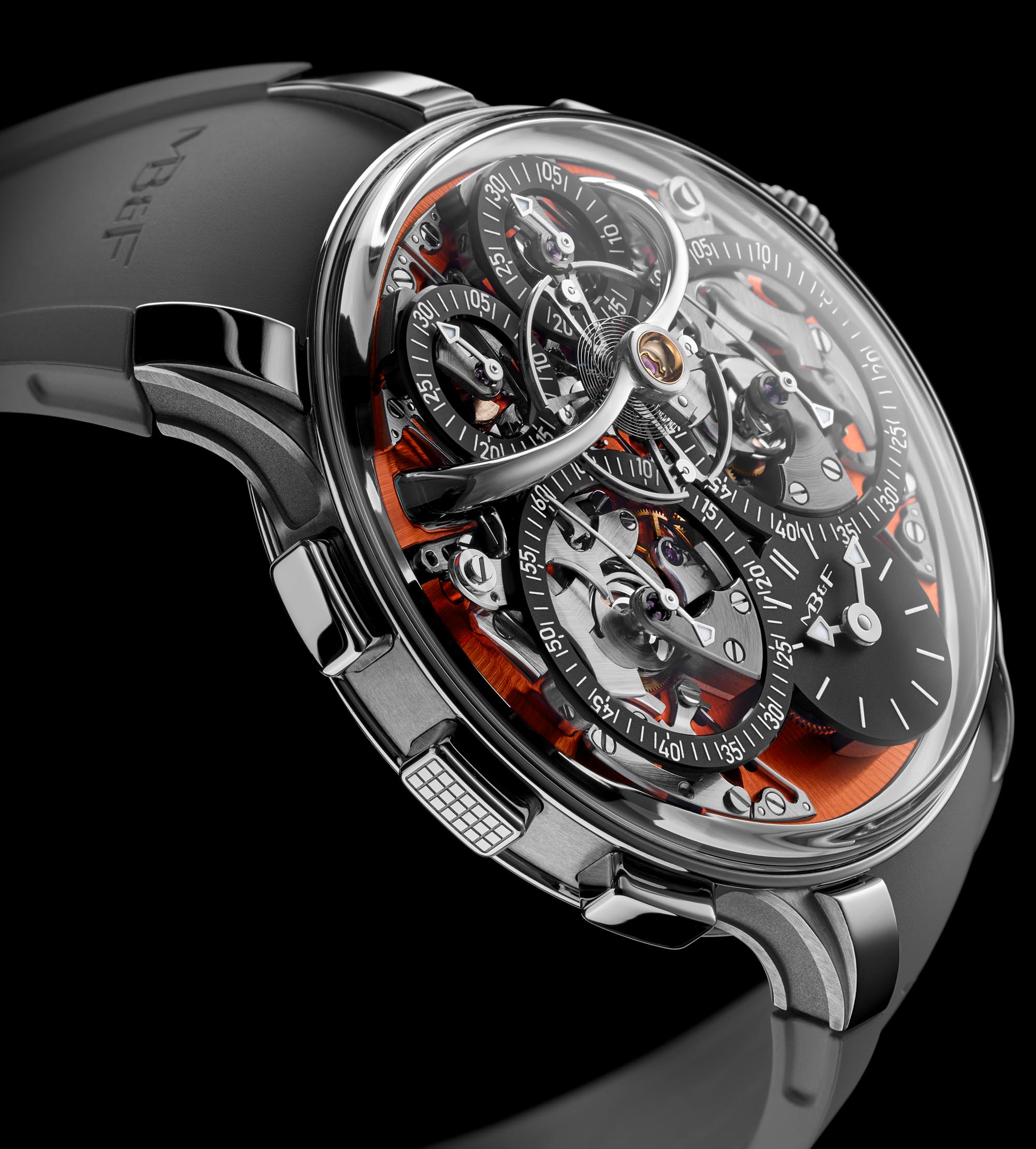 There is, however, a fifth pusher… The “Twinverter.”

The brand claims that this “is the secret that elevates the functionality of the Legacy Machine Sequential EVO beyond any existing chronograph wristwatch.” In an industry that thrives on overstatements, this one actually holds true, as the Twinverter does genuinely expand the way a chronograph can be used. It controls both chronograph systems as a switch that inverts the current start/stop status of each. If both chronograph displays are stopped, like at the start of a race, pressing the Twinverter will start both simultaneously. If they are both running, the Twinverter makes them stop. If one is running and the other is stopped, like at the end of a lap, the Twinverter stops the one that is running and starts the one that is stopped. 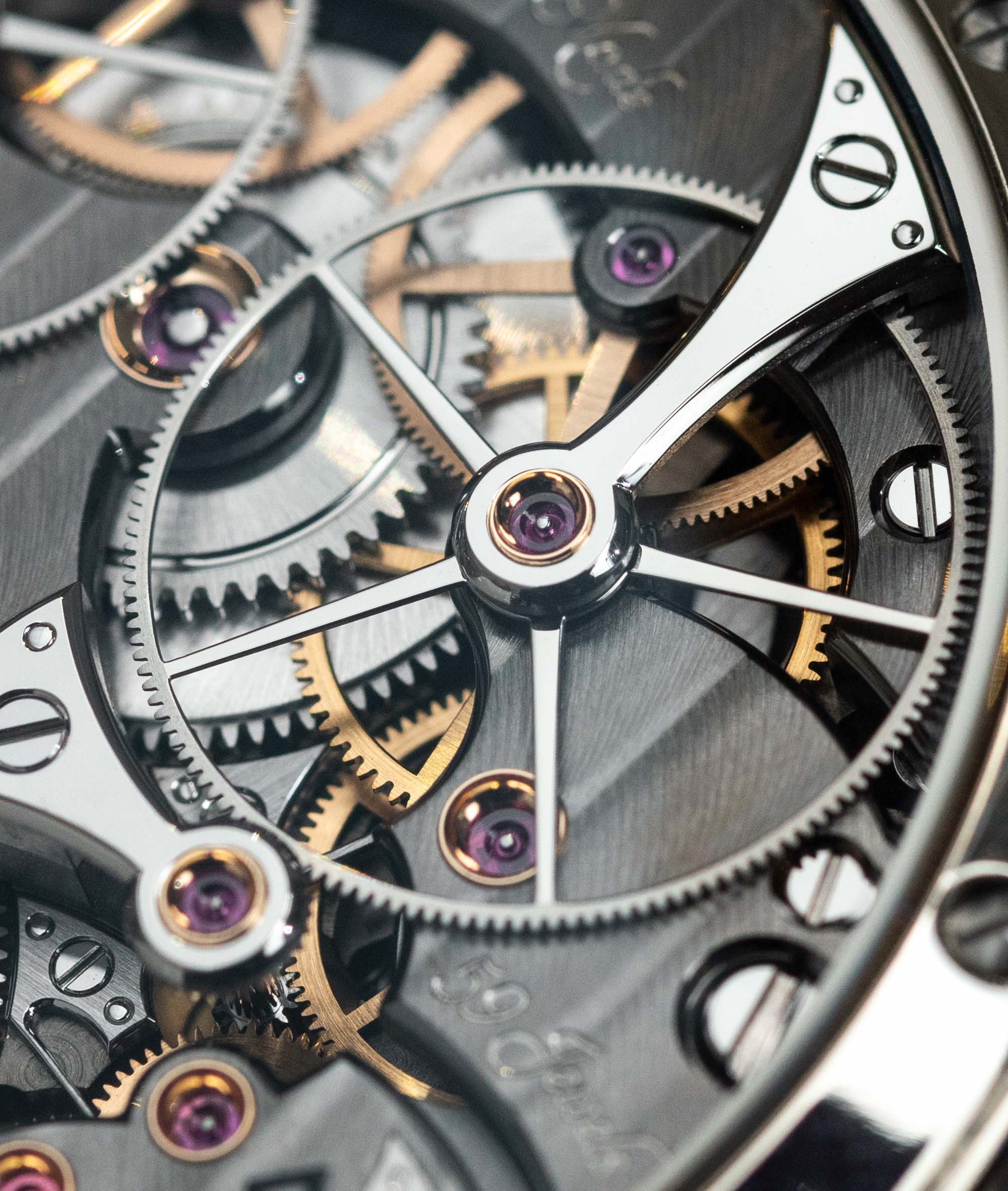 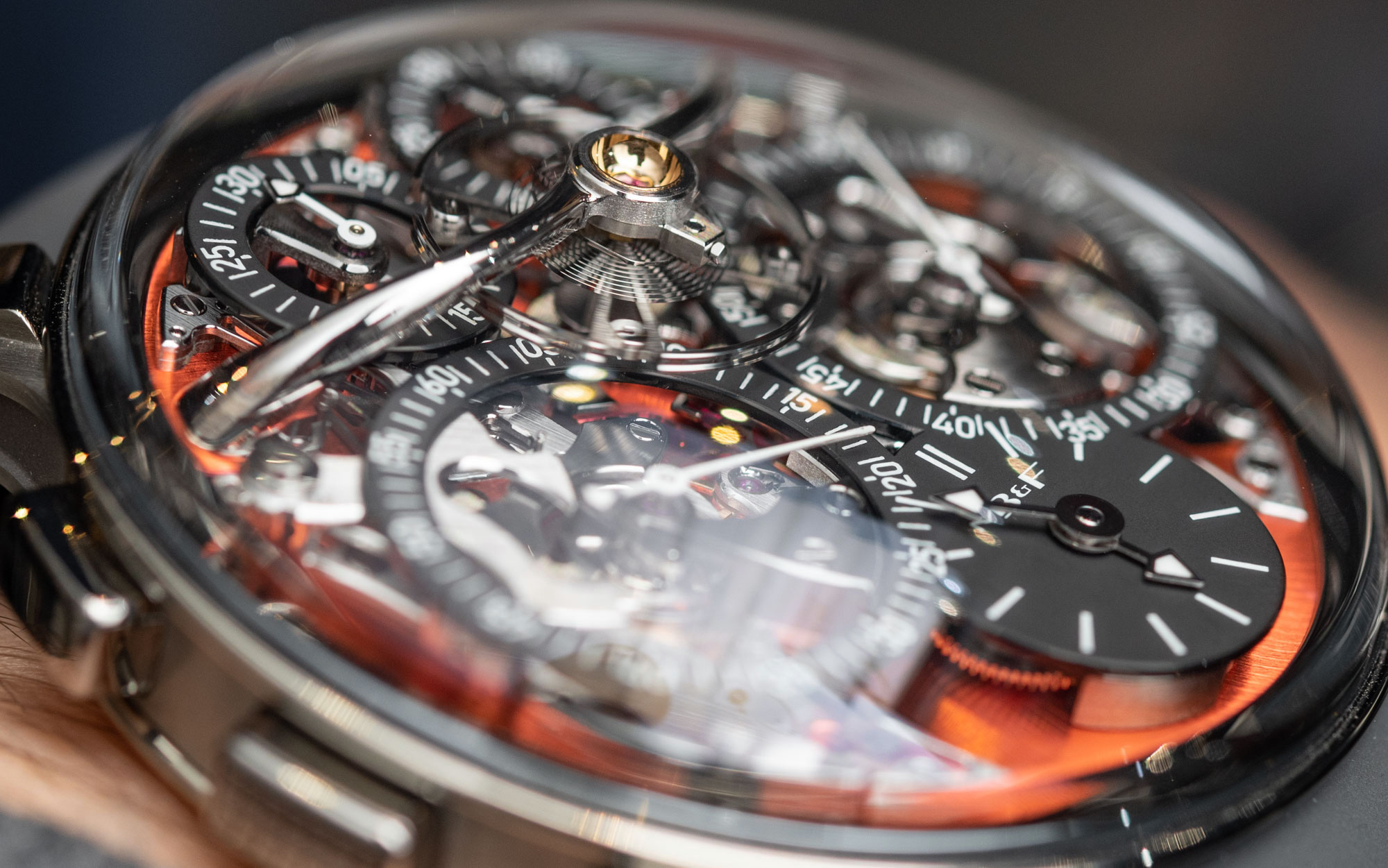 This is a vastly superior alternative to those additional chronograph features the watch industry has managed to offer thus far, such as the flyback (which stops the running chronograph but also restarts it from zero at that same moment, making it difficult to note or memorize the time at which it was reset to start timing a new lap or navigation segment) or the split-seconds (which can be used as a lap timer but could not be used to accurately start timing the new lap right at the moment when the previous one ended). 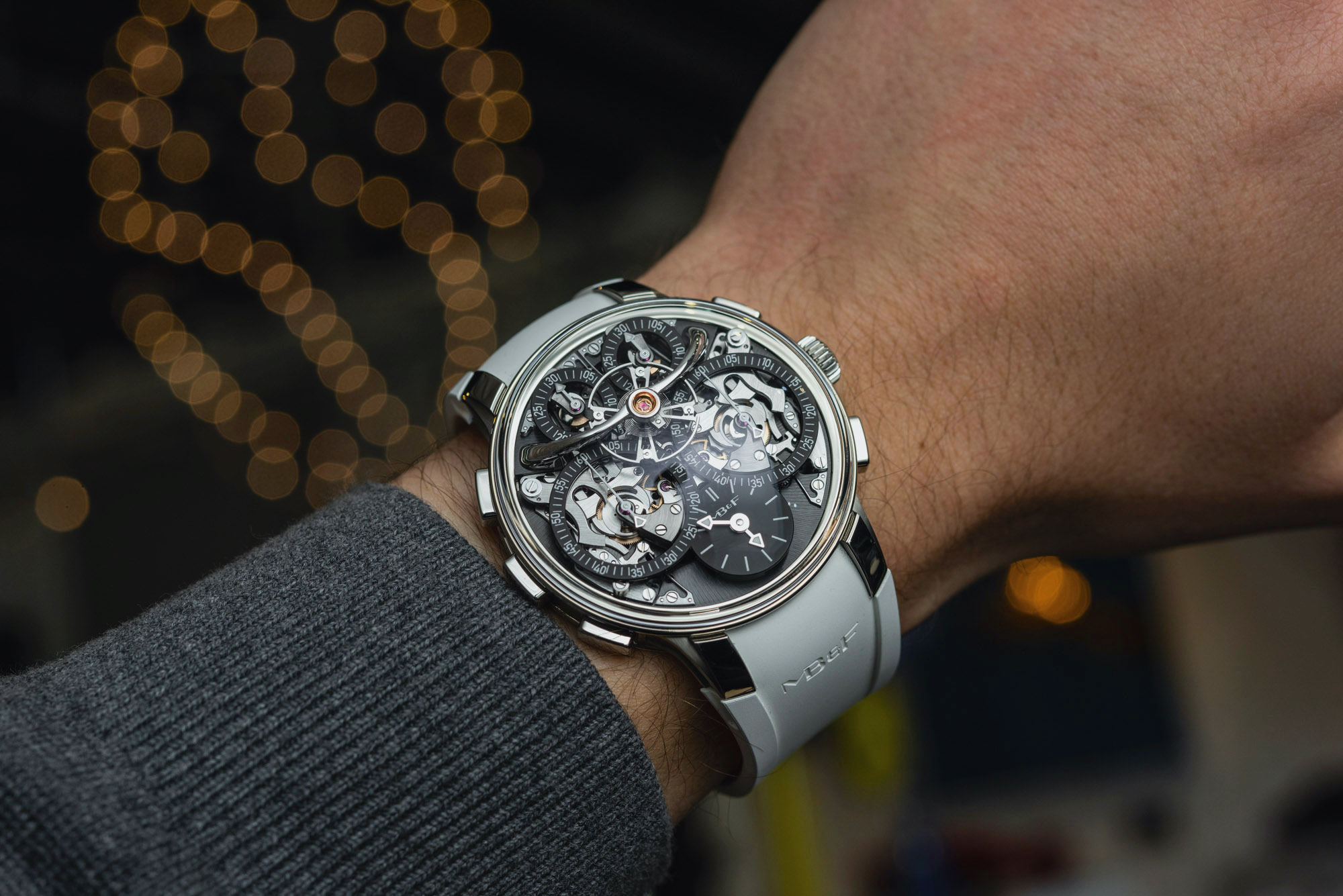 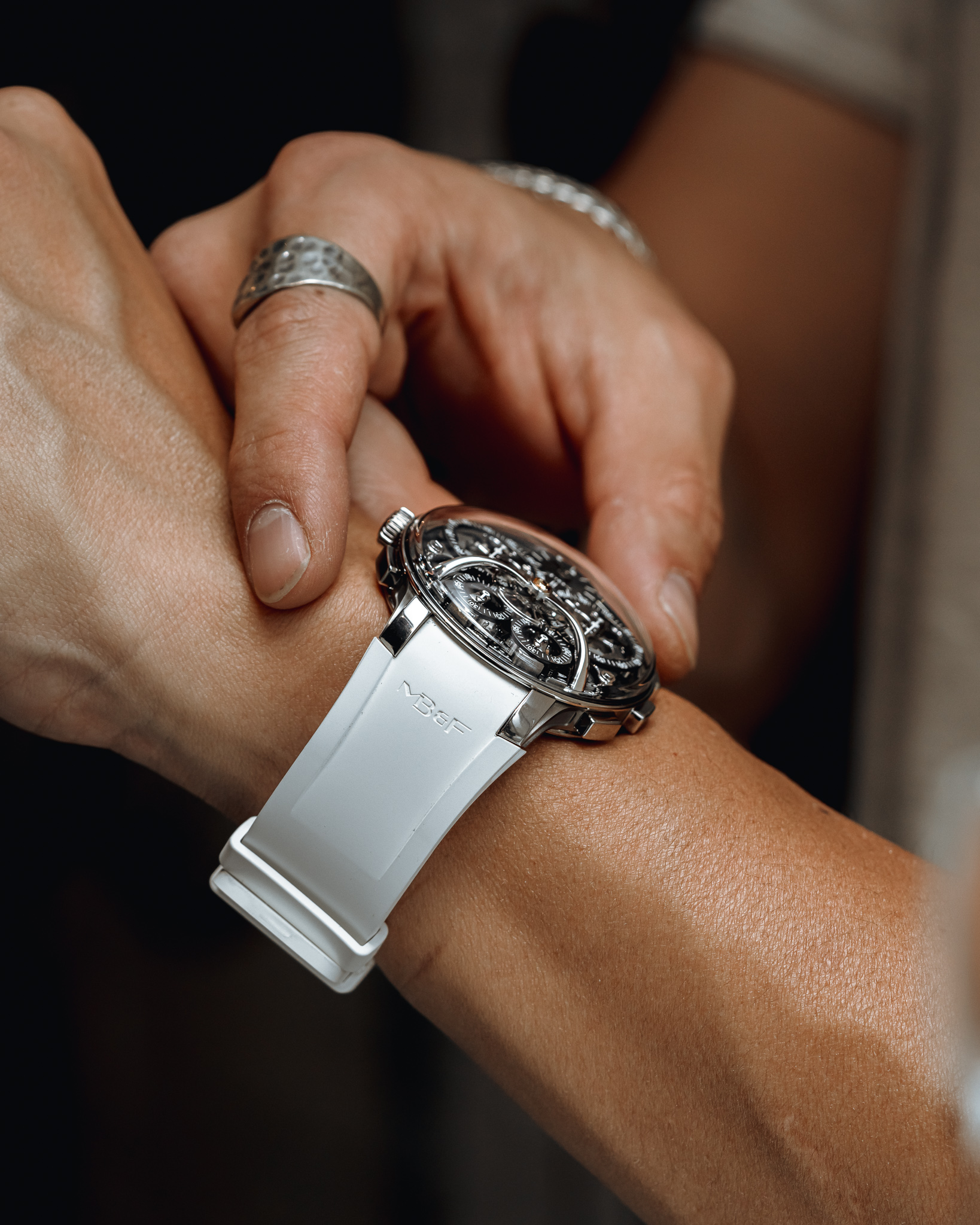 This introduces multiple timing modes. The LM Sequential EVO therefore has an Independent Mode that allows the wearer to measure the duration of multiple events with separate starting and end points, even when the events overlap in time. Simultaneous Mode is for when two events start simultaneously but have different end points, like when a race starts. Cumulative Mode can be used to measure the individual cumulative durations of two discontiguous events, like tracking how much time is spent on two separate projects, switching between them throughout the day. Sequential Mode (i.e., lap mode) is for measuring the individual sub-durations of a single continuous multi-phase event, where one side is running and the other is stopped, and, as the lap terminates and a new one starts, they are flipped using the Twinverter. 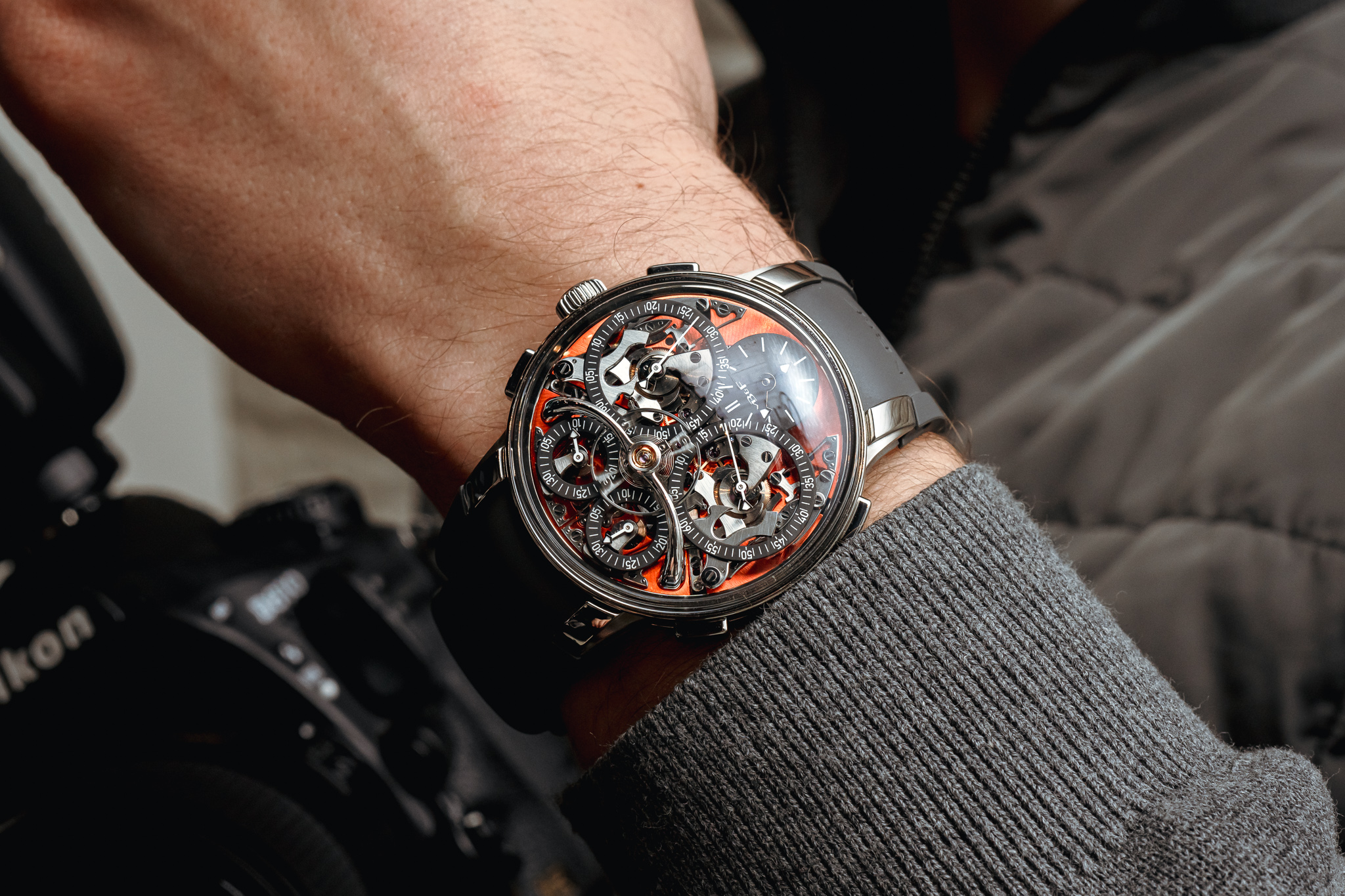 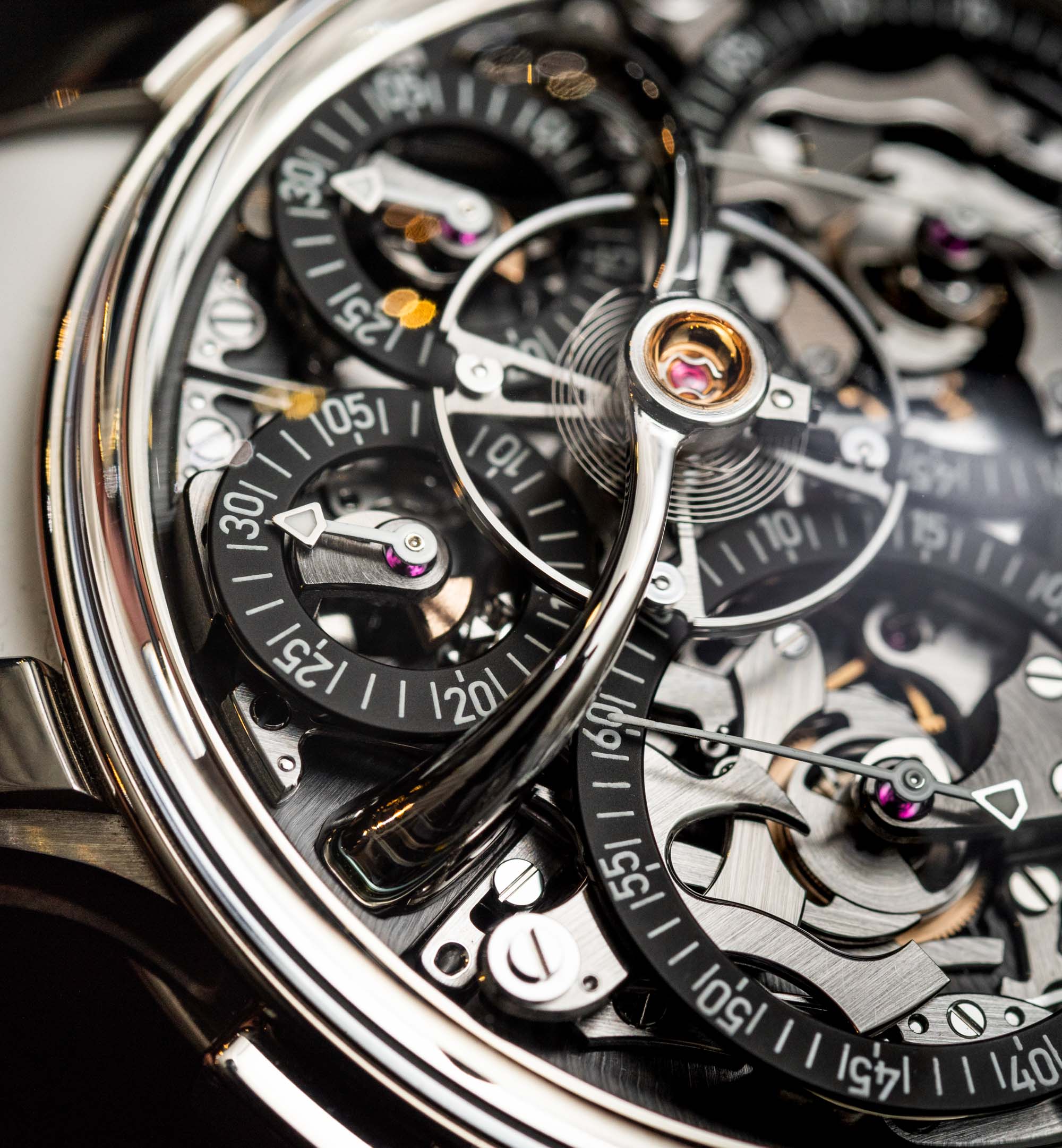 Over the decades (in fact, centuries), some of the greatest watchmakers have taken up the task of designing and re-designing lap timers and split-seconds chronographs in wristwatches, but none seems to have combined all these various functions with such streamlined and efficient usability. And the Legacy Machine is the perfect caliber for this: With its balance wheel in the center, its symmetrical layout naturally supports the twin-chronograph design, while its balance wheel is raised high above the movement plane, leaving room for the countless wheels, cams and levers that the five-pusher chronograph complication needs to operate. The movement still runs at 3 Hertz (21,600 vph) and combines that with a weekend-lasting 72 hours of power reserve courtesy of a hand-wound double mainspring. 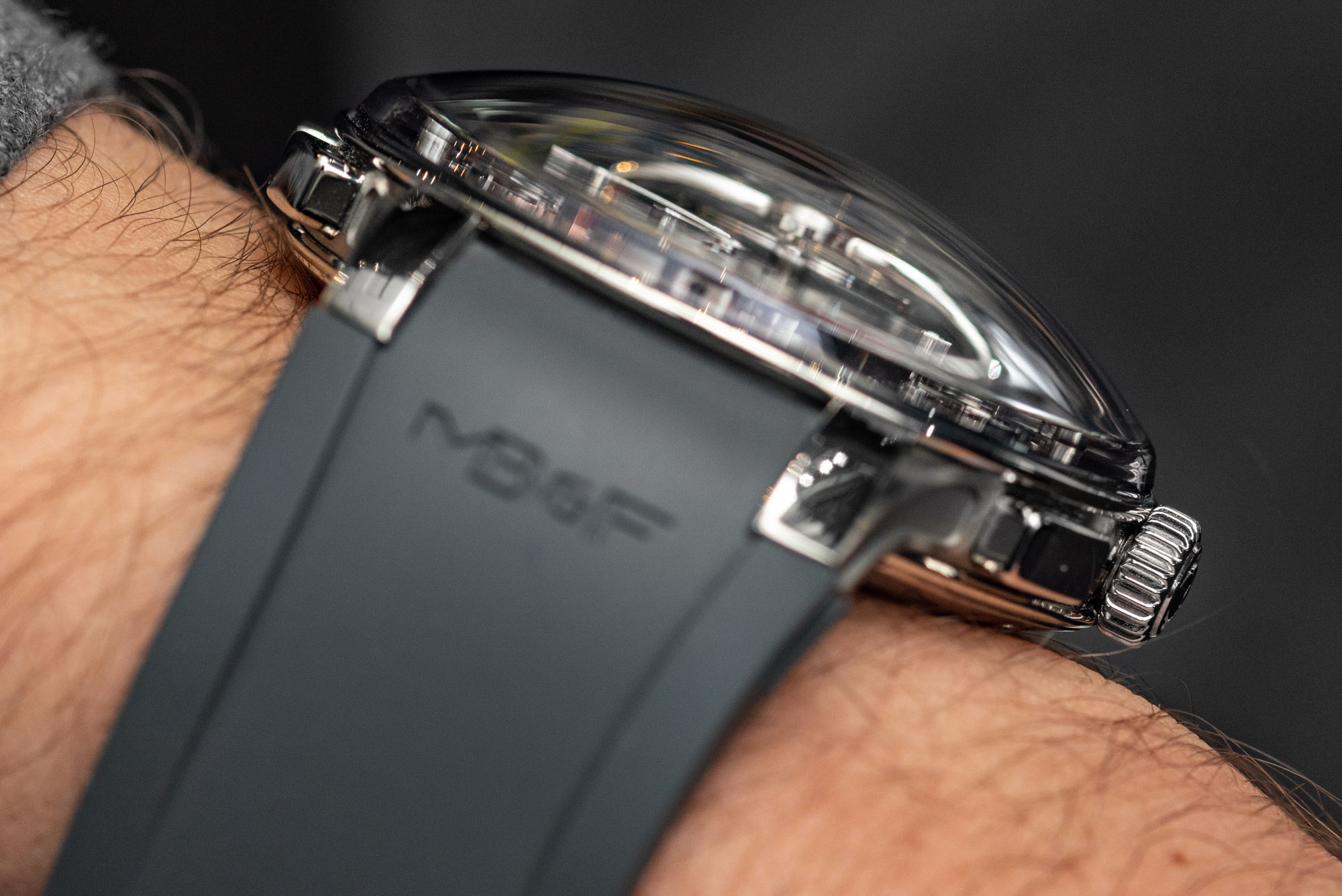 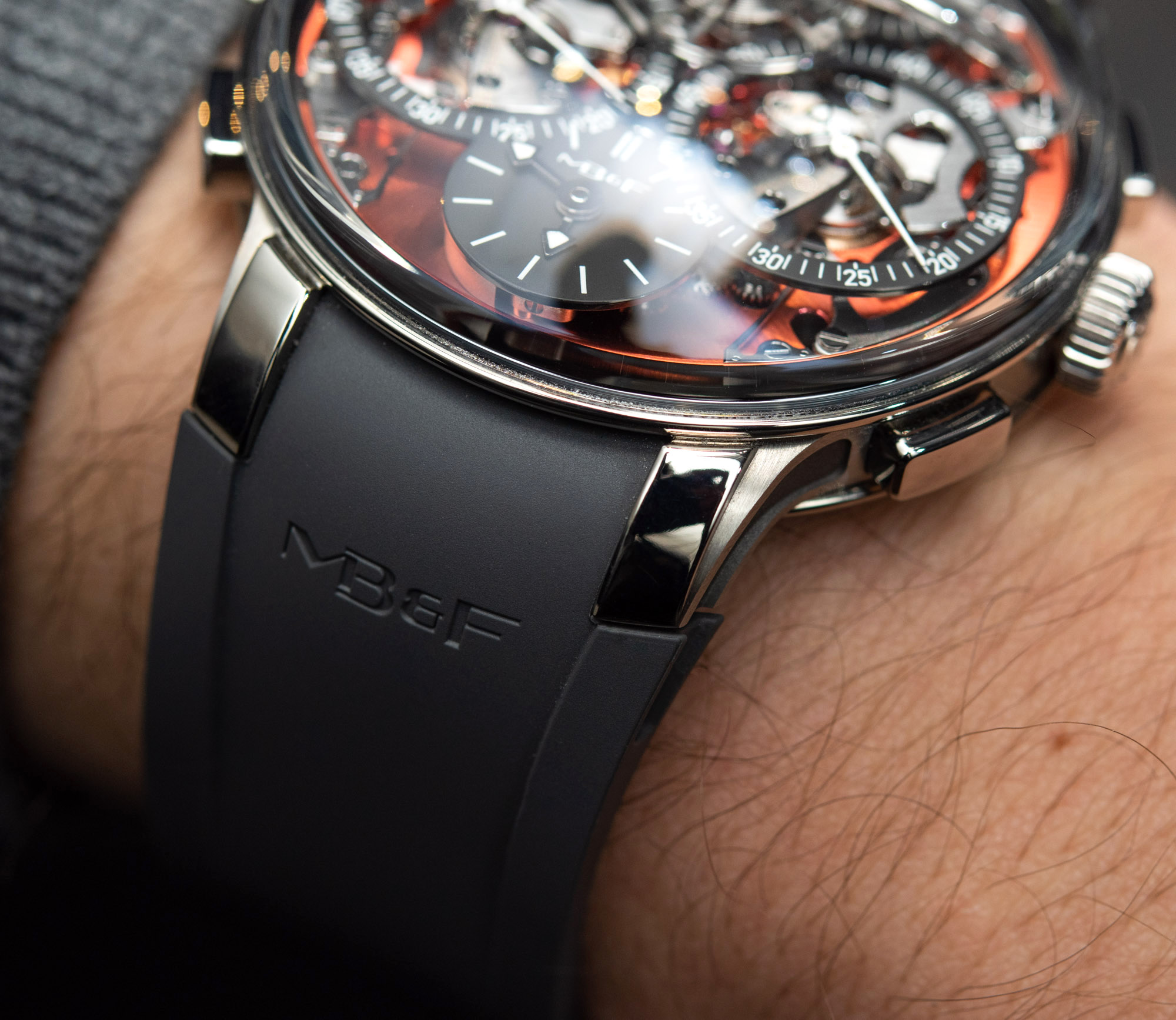 The no-bezel case design of the Legacy Machine further opens up the dial side of the movement, all protected by a bubble of a sapphire crystal, treated with anti-reflective coating on both sides to minimize the domed crystal’s tendency to reflect glare from every angle behind the wearer. This construction also helps disguise the 18.2mm thickness of the watch — unless you have a tendency to bang thick watches into walls and door handles and whatnot, you will not notice any difference whatsoever in the wearability of this and most other chronographs. Sure, it’s no Cosmograph Daytona, but the light weight, comfy caseback and lug design, and the shape of the rubber strap all place the MB&F Legacy Machine Sequential EVO among the more comfortable chronograph watches out there. 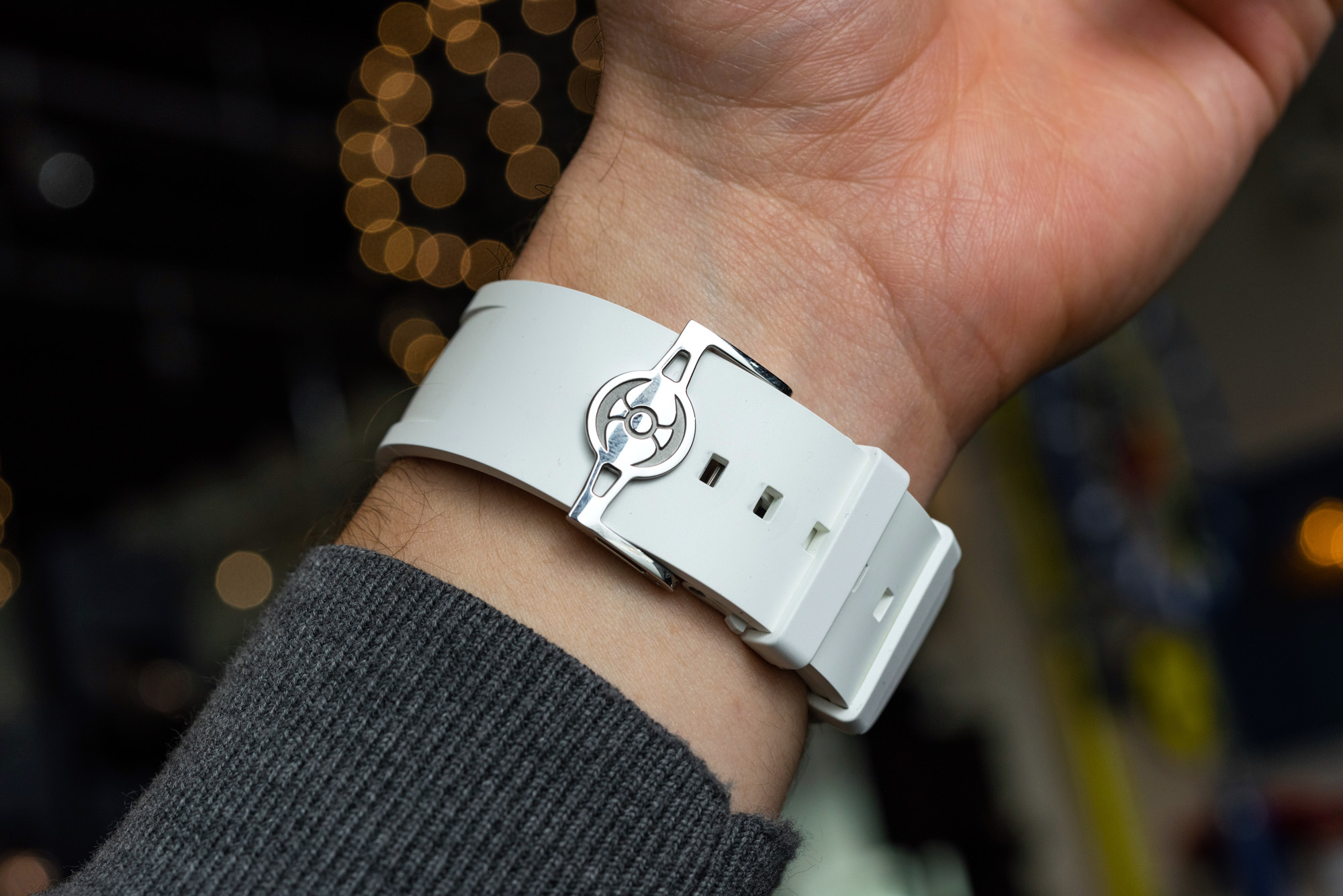 And MB&F wants its customers to wear the LM Sequential EVO with peace of mind. Continuing what the brand started with the Perpetual Calendar EVO, it engineered and tested the real-world water resistance of the 44mm-wide zirconium case: MB&F team members report having jumped into the water off boats and cliffs with EVO watches on. And although they admit there is some getting used to the practice of jumping into water with a complex six-figure mechanical watch on, MB&F customers have requested a watch that can take on this sort of activity. The complicated movements and bespoke cases of previous Horological Machine and Legacy Machine watches were not at all designed for splashes in the water or for extensive and repetitive shocks and vibrations. The EVO line of MB&F watches and the FlexRing system (more about that in the article on the Perpetual Calendar EVO) have been designed to solve all that. 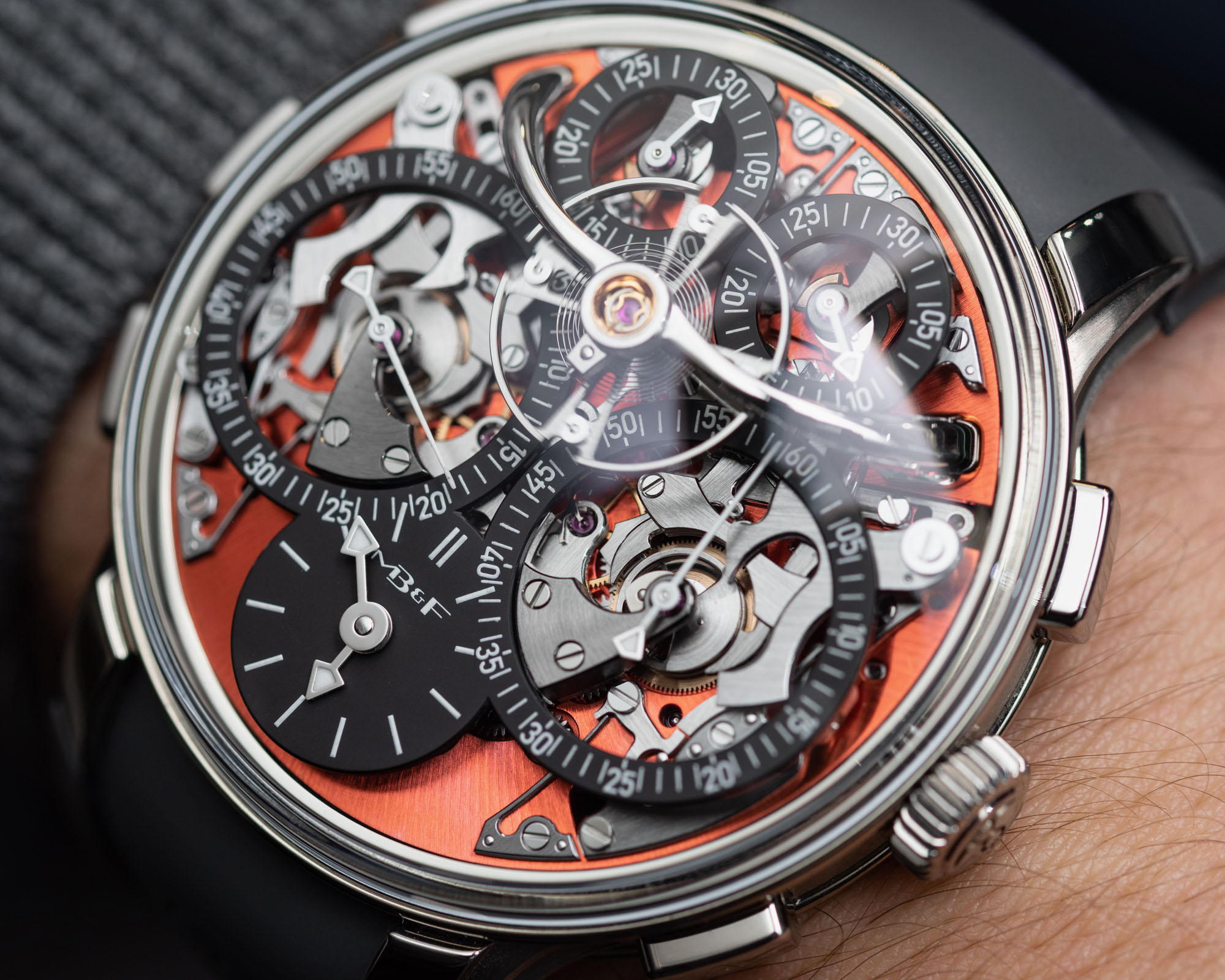 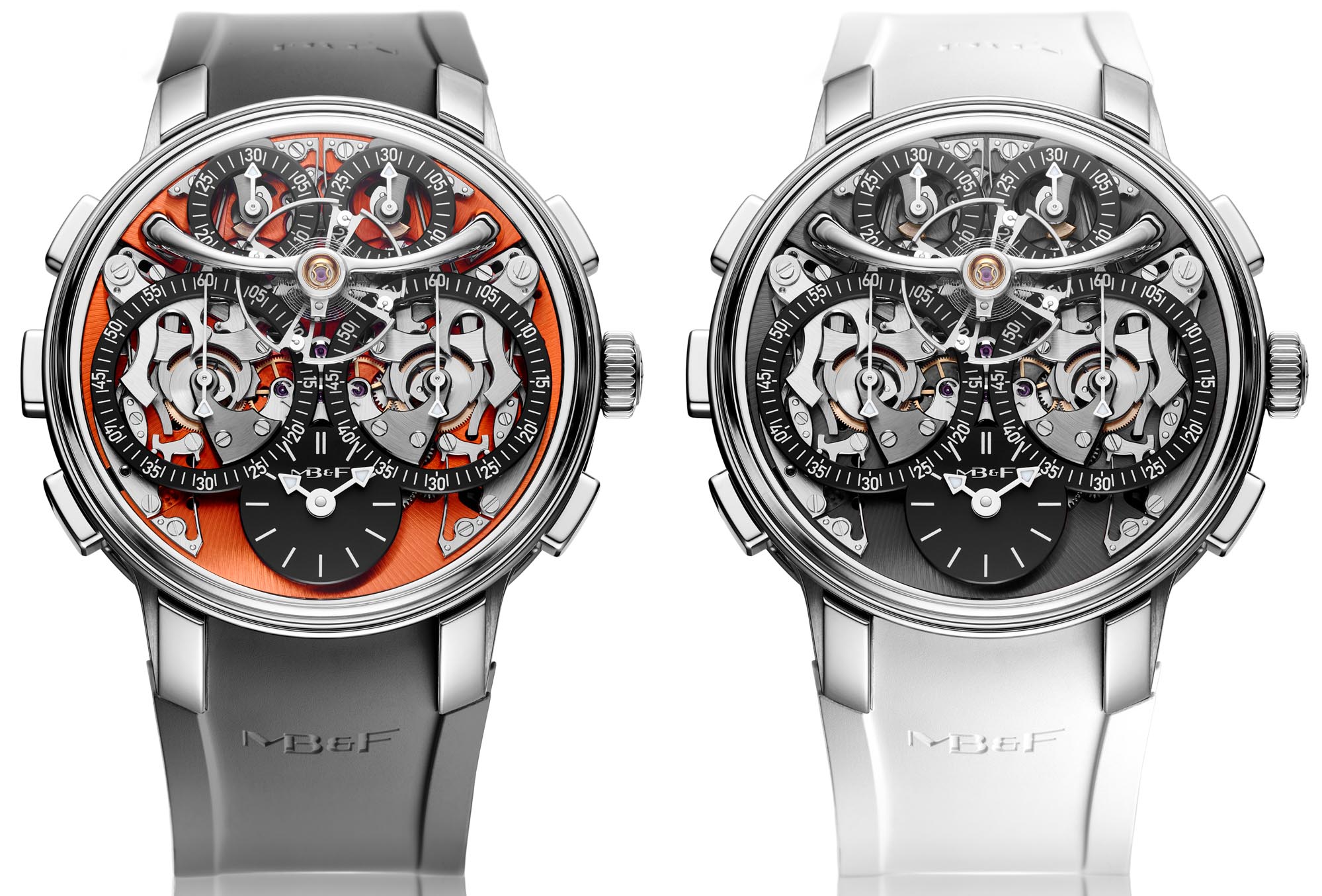 The MB&F Legacy Machine Sequential EVO is available in two versions, both cased in zirconium, one with a dial in “atomic orange” and the other with “coal black” dial plates. Although the orange version is very, ahem, atomic indeed, the black and white version on the white strap just oozes good summertime vibes — maybe a Dufour 470 also comes with the purchase. But you probably already have one docked outside Portofino if you are picking one of these up. In other words, despite all the mechanical complexity, watchmaking ingenuity and eye-wateringly beautiful execution, the comfort and day-to-day wearability of the LM Sequential EVO must also be appreciated as one of the most impressive features of this watch. Whereas many historic watchmakers have had what it takes to create complicated chronographs, very few of them have ever truly addressed the real-world wearability and durability of their executions. They were often more technical exercises and concept products that they allowed you to buy than watches designed to be actually used for their intended purpose — including accurately timing successive events or, you know, just wearing the thing without having to worry about its delicacy. 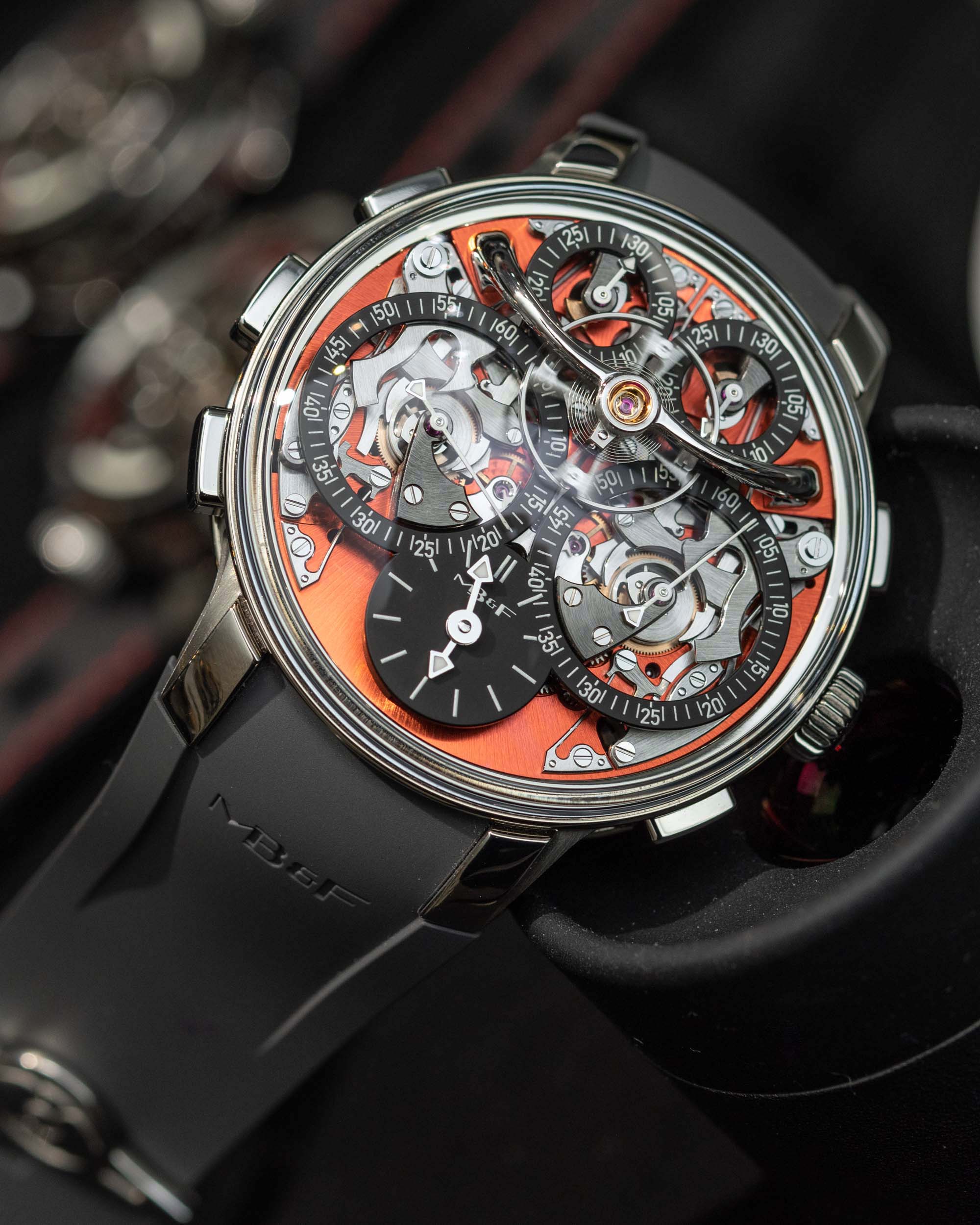 Having the chance to play around with the LM Sequential EVO at the M.A.D. Gallery in Geneva was a real treat for me (and teammates Zach and Ed). Few things in watchmaking are better than a dial full of exposed movement parts and five buttons to fiddle around with, seeing filigree hands move and stop and fly back on demand. But seeing these features presented in a way that promises to take the punishment of daily life certainly is one of them.

Price for the MB&F Legacy Machine Sequential EVO is $180,000 (excluding tax), and you can learn more (and even purchase) at the brand’s website here.