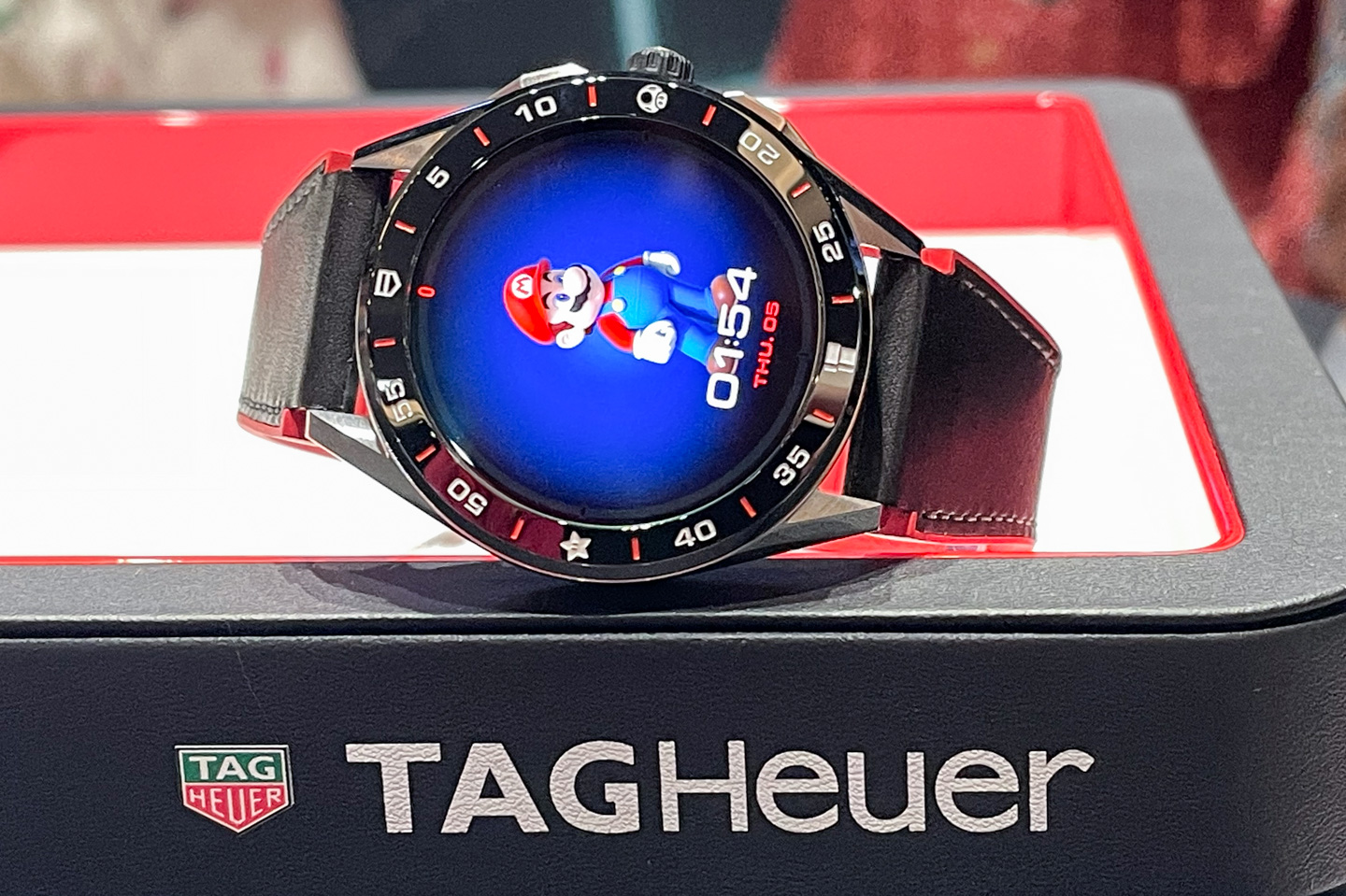 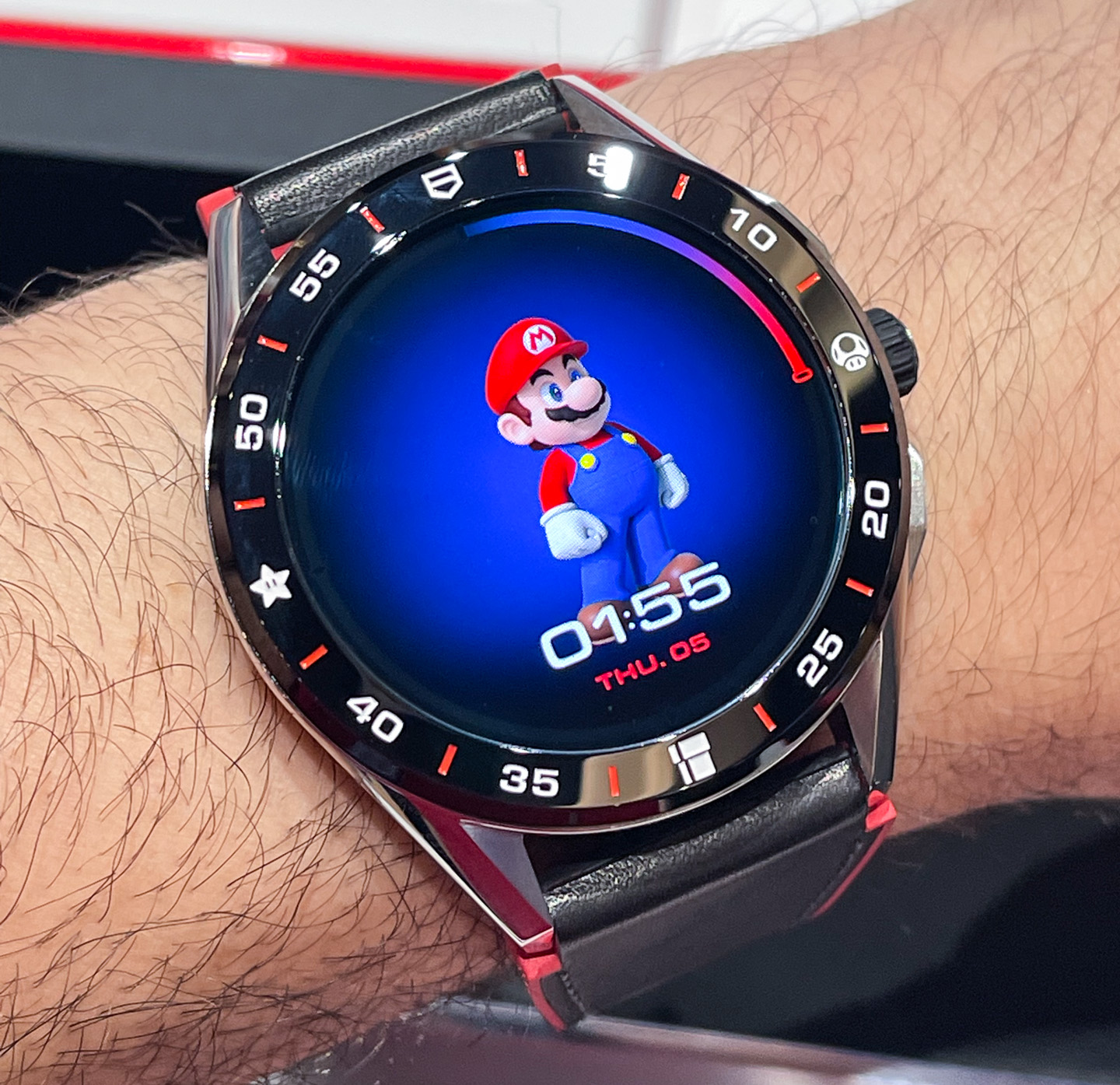 TAG Heuer recently announced a limited-edition version of its latest TAG Heuer Connected smartwatch produced in collaboration with Nintendo and featuring Super Mario from the famed Super Mario Bros. video game franchise which debuted in 1985. This generation of the TAG Heuer Connected was debuted in March of 2020 by aBlogtoWatch here. For this limited-edition Super Mario version, TAG Heuer did two interesting things. The first is to create a modified version of the Connected watch that includes some special colors and Super Mario universe icons. This includes the “M” for Mario on the strap deployant, as well as the mushroom, star, and pipe symbols on the colorful ceramic bezel.

The second part of the limited edition is actually not going to be so limited — which I think is the best part of the news. TAG Heuer worked with Nintendo to develop special software for the base Google Wear OS operating system that includes a series of special Super Mario-themed animations. Notably, the animations are connected to the fitness tracker system. When users reach 25%, 50%, 75%, and 100% of their selected daily fitness goals, they are presented with a Super Mario-themed achievement animation. It’s very fun, and it’s directly related to the gamification of fitness that smartwatches have been enabling for a few years now. 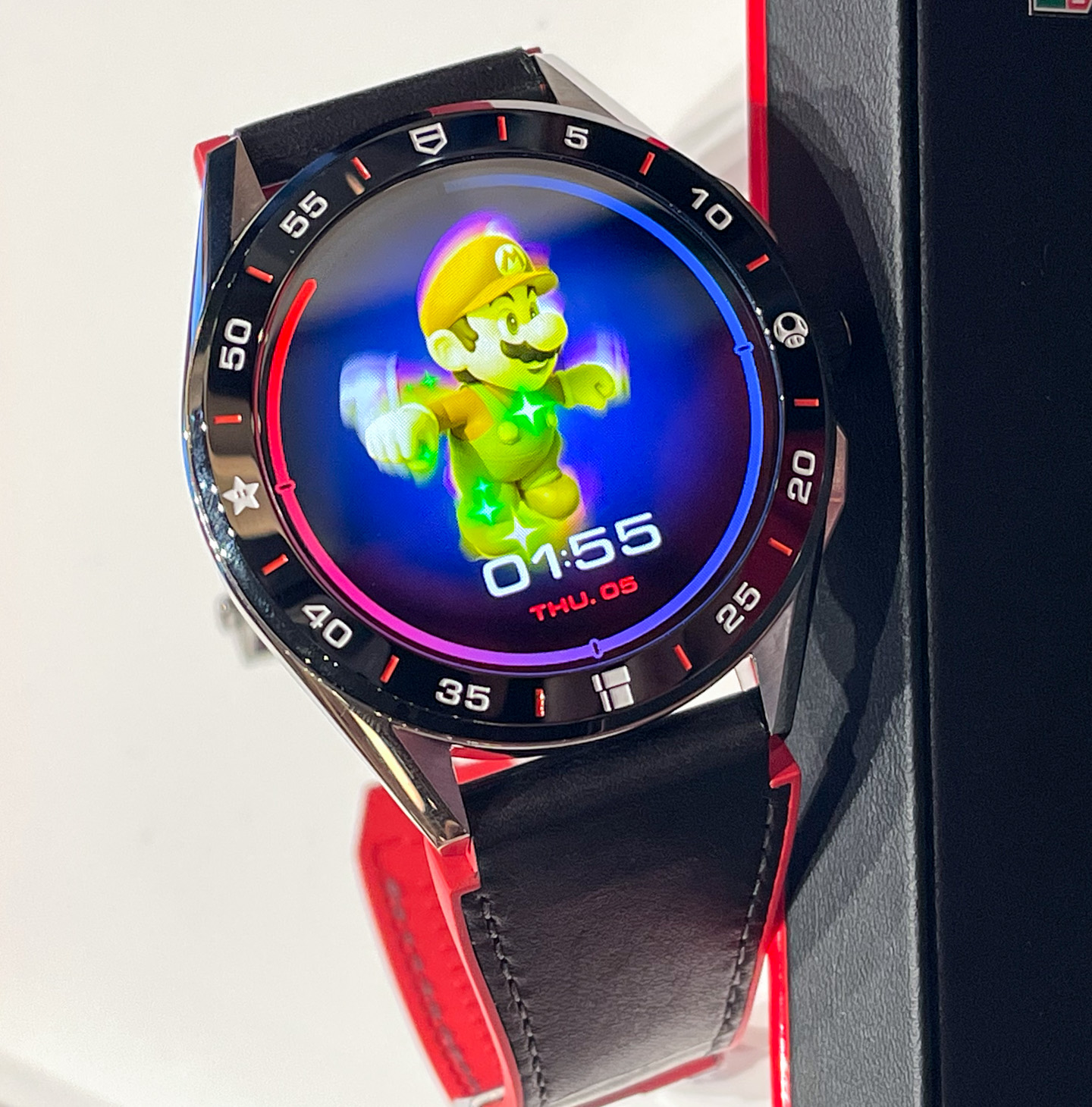 Each of the 2,000 pieces of the limited-edition TAG Heuer Connected X Super Mario smartwatch has already been spoken for (sold out even though the product hasn’t been commercially released yet), but that didn’t prevent a predictable volume of controversy in online wristwatch enthusiast communities on social media. I observed two camps of people: those who love the idea of Super Mario as the basis of a luxury item, and those who simply don’t. TAG Heuer itself pays close attention to consumer feedback, and I have to admit the contrasting nature of the watch’s clear commercial success with some of the negative feedback given by the watch hobbyist community tends to confuse things (along with other brands who do similar pop-culture collaborations for luxury products).

What I believe is happening is simply generational. There are those of us who played Super Mario Bros. games at various points in our lives. I played at least a dozen Nintendo Super Mario Bros. games, including the 1985 classic, as early as 1986 when I was just four-years-old, and those of us who are aware of Super Mario Bros. as part of pop culture, but don’t have a lot of direct experience with the games and entertainment involved with the characters. For this latter generational group, I can see how a luxury smartwatch costing a bit over $2,000 featuring a video game character can seem trite. That said, for the former group, the Connected Super Mario is not only pleasing but nothing about the presentation makes us feel that this is inappropriate in a luxury item. 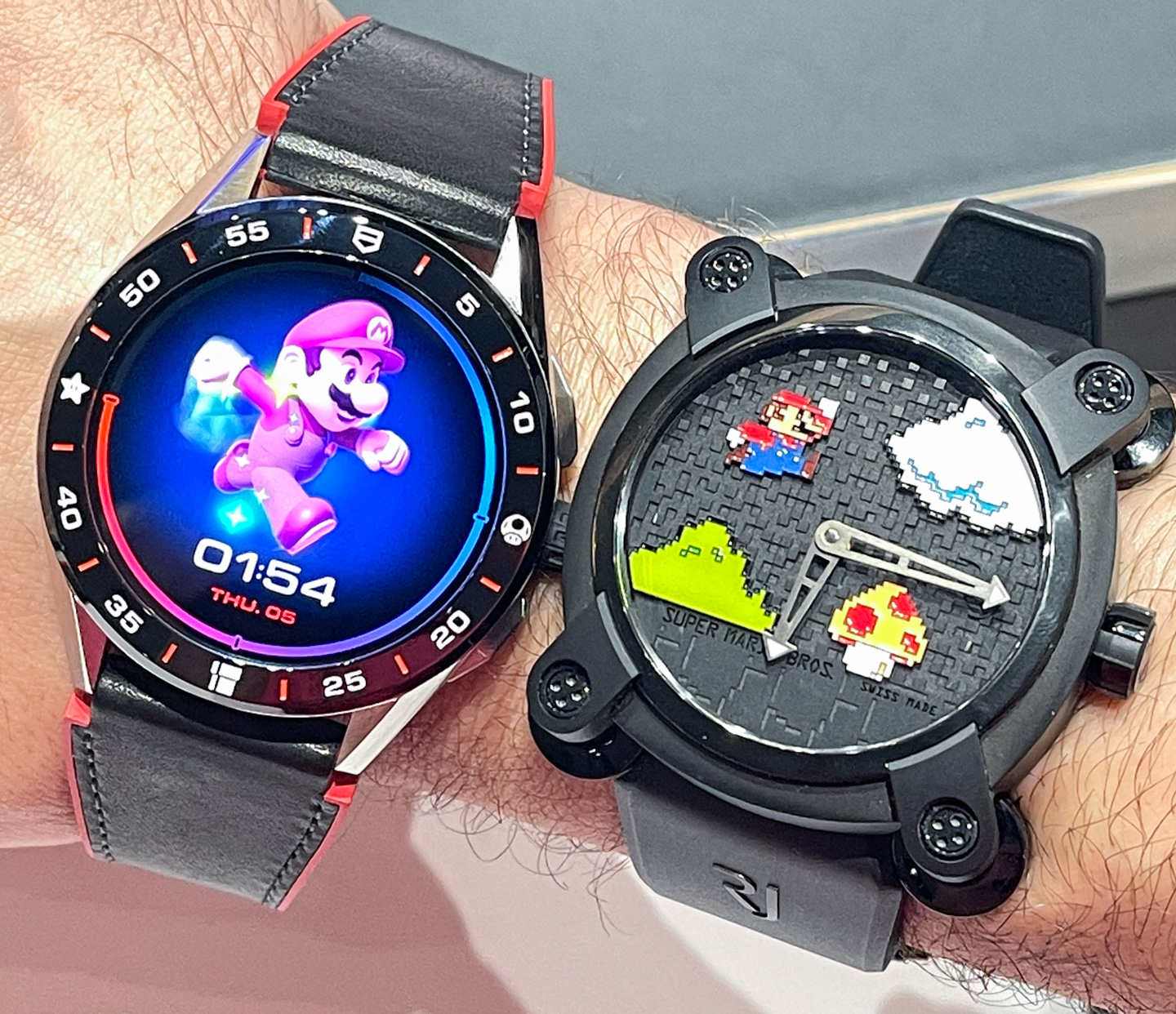 TAG Heuer is not the first luxury watchmaker to feature Super Mario. That honor goes to the now-defunct Romain Jerome, who in 2015 came out with a limited edition of 85 pieces Super Mario watch that I reviewed here. The watch was part of a series of classic video game-inspired luxury timepieces by Romain Jerome when the company was being run by Manuel Emch. Romain Jerome was a more niche company and its Super Mario watch was priced at nearly $19,000 USD. TAG Heuer has a lot more awareness for its products, and even though Super Mario has been part of luxury watchmaking for over five years now, the TAG Heuer Connected Super Mario Limited Edition is probably the first time many people are being introduced to a Super Mario luxury timepiece, even if it is a smartwatch and not positioned in the same category as TAG Heuer’s higher-end mechanical timepieces.

While viewing the TAG Heuer Connected Super Mario watch here in California, TAG Heuer CEO Frederic Arnault was there to chat about the product and the relationship with Nintendo (a name that was really not connected with the launch). Mr. Arnault is young, in his mid-20s, and also tasked with making TAG Heuer appeal even more to today’s youngest consumer generation. He was a bit surprised, I think, at how some of the more traditionalist watch consumers reacted to the Super Mario watch online — but was reassured by the fact that the whole lot of 2,000 watches sold out so quickly. He certainly wants to please audiences, but I think he is quickly learning that, when it comes to passion (which drives luxury design and purchasing behavior), you can’t have love without at least some accompanying hate on the other extreme of the spectrum. TAG Heuer, more so than many other luxury watchmakers today, does have the challenging task of concurrently making different products that appeal to very different arms of the luxury consumer ecosystem. This almost guarantees a bit of product reaction controversy, from time to time. As I keep recommending to brands: When it comes to reacting to online opinions and comments, their job is merely to set the record straight if someone publishes misinformation. There is no need or value to responding to even reacting to people’s individual emotions that are shared with the public at large (often in poor taste). 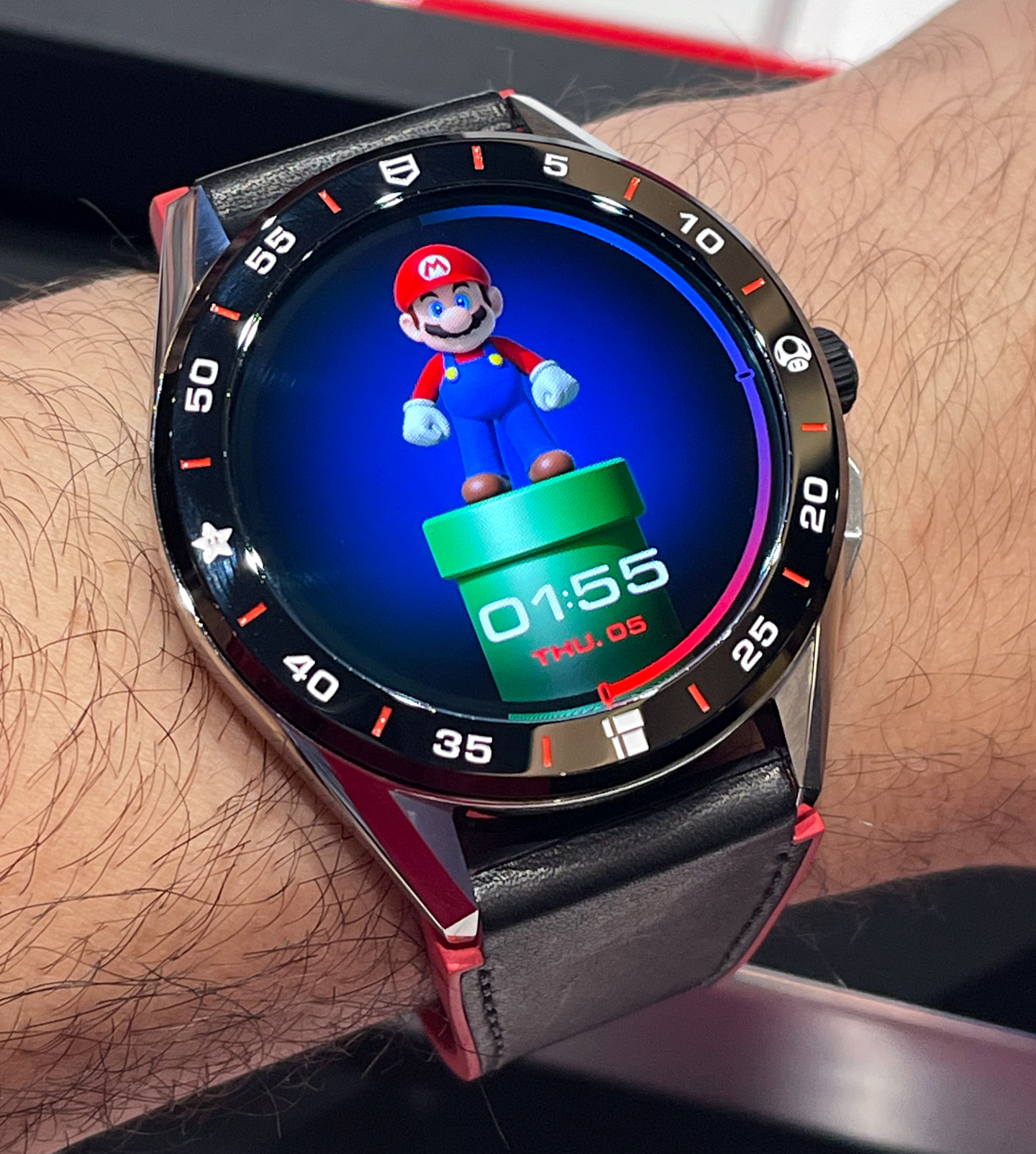 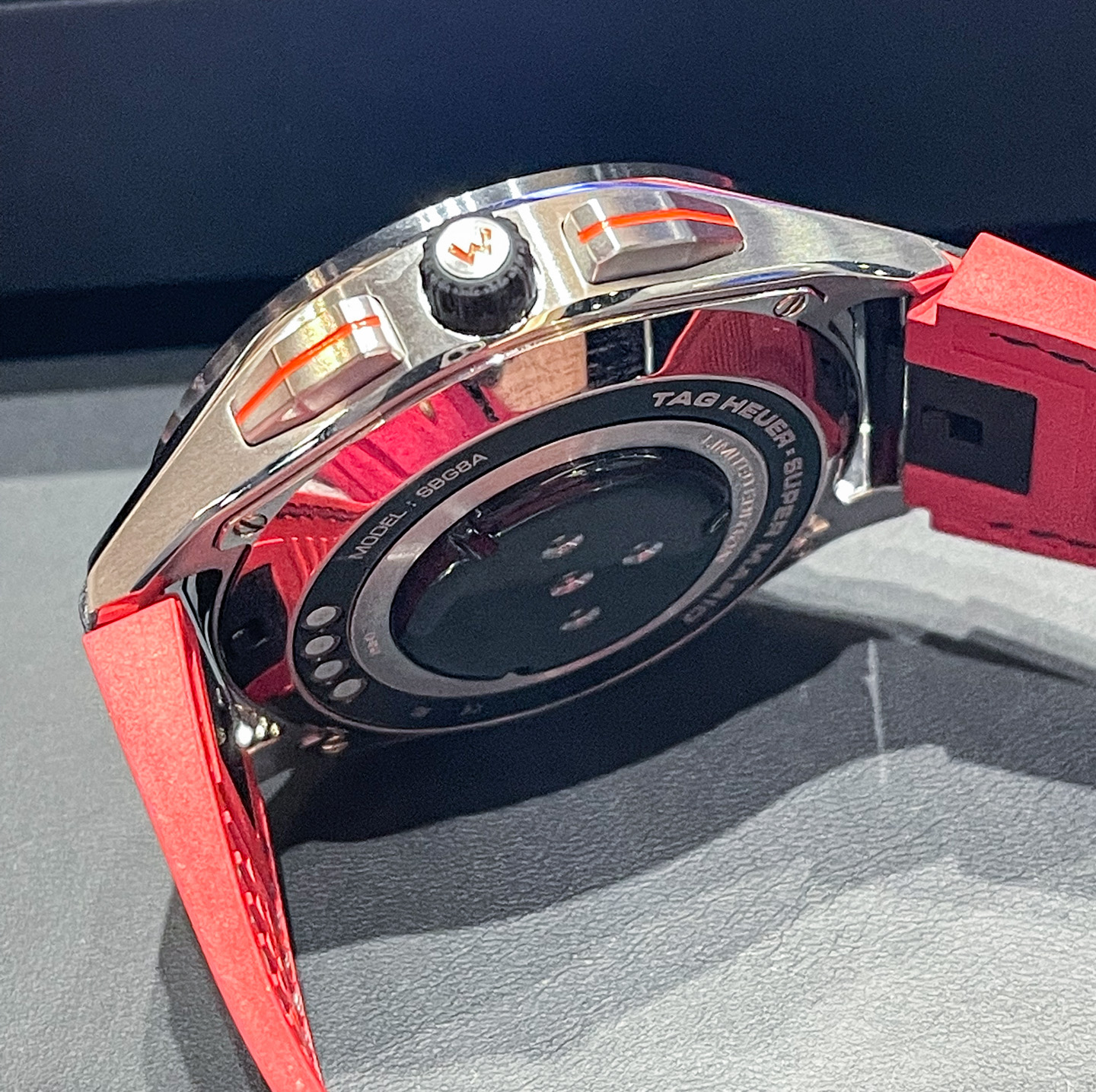 Mr. Arnault also reminded me that in addition to this special Super Mario Limited Edition of the Connected (with its unique Super Mario branding and colors), the Super Mario software skin will soon be available to all TAG Heuer Connected products — not just the Super Mario Edition. More so, the relationship with Nintendo allows them to take the concept much further if they wish and develop more software skins, as well as other Nintendo character-themed versions of Connected (and perhaps even other products). This is, after all, the era of the “collaboration watch.”

To read more about the tech specs of the 45mm-wide TAG Heuer Connected Super Mario, or the most recent generation of the Connected product, please see the links above to the other related aBlogtoWatch articles on these products. I simply want to remind people that the 45mm-wide steel case is very comfortable and comparatively thin when compared to previous-generation Connected watches. The watches come with a quick-release system for the strap, and the Super Mario Limited Edition version comes with the pictured black with red rubber lining leather strap, as well as a perforated red-colored rubber strap that is a bit sportier.

Compared to other luxury smartwatches, the current Generation TAG Heuer Connected probably feels like the most luxurious of them all. The polished case elements and sapphire crystal are much better-looking than a lot of the competition out there. The screen is also very bright and crisp. Unlike the Vertu phones (that looked great but always had last-generation tech), the TAG Heuer Connected has more or less the latest in smartwatch hardware (given its software platform) but with a slick Euro-designed case and bracelet and high-end branding experience. I happen to think this type of product makes a lot of sense as a side-arm of the larger TAG Heuer brand. But then again, I also think TAG Heuer should get back into other product areas again like eyewear and apparel.

The watch itself runs the Google Wear OS operating system, which means this watch will work best with Android-based phones (though it will work with iPhones, as well). The watch has all the common smartwatch features and systems, including a heart rate monitor that was introduced for this generation of Connected product. I think the TAG Heuer Connected X Super Mario Limited Edition smartwatch is an exciting product and would be a joy to wear. That’s partially because I have personal childhood history with the theme — and I wouldn’t blame anyone who didn’t for not being as excited about this product. I am also interested to see where TAG Heuer takes the Super Mario and Nintendo relationship next. Price for the TAG Heuer Connected X Super Mario Limited Edition watch is $2,150 USD. Learn more at the TAG Heuer website here.