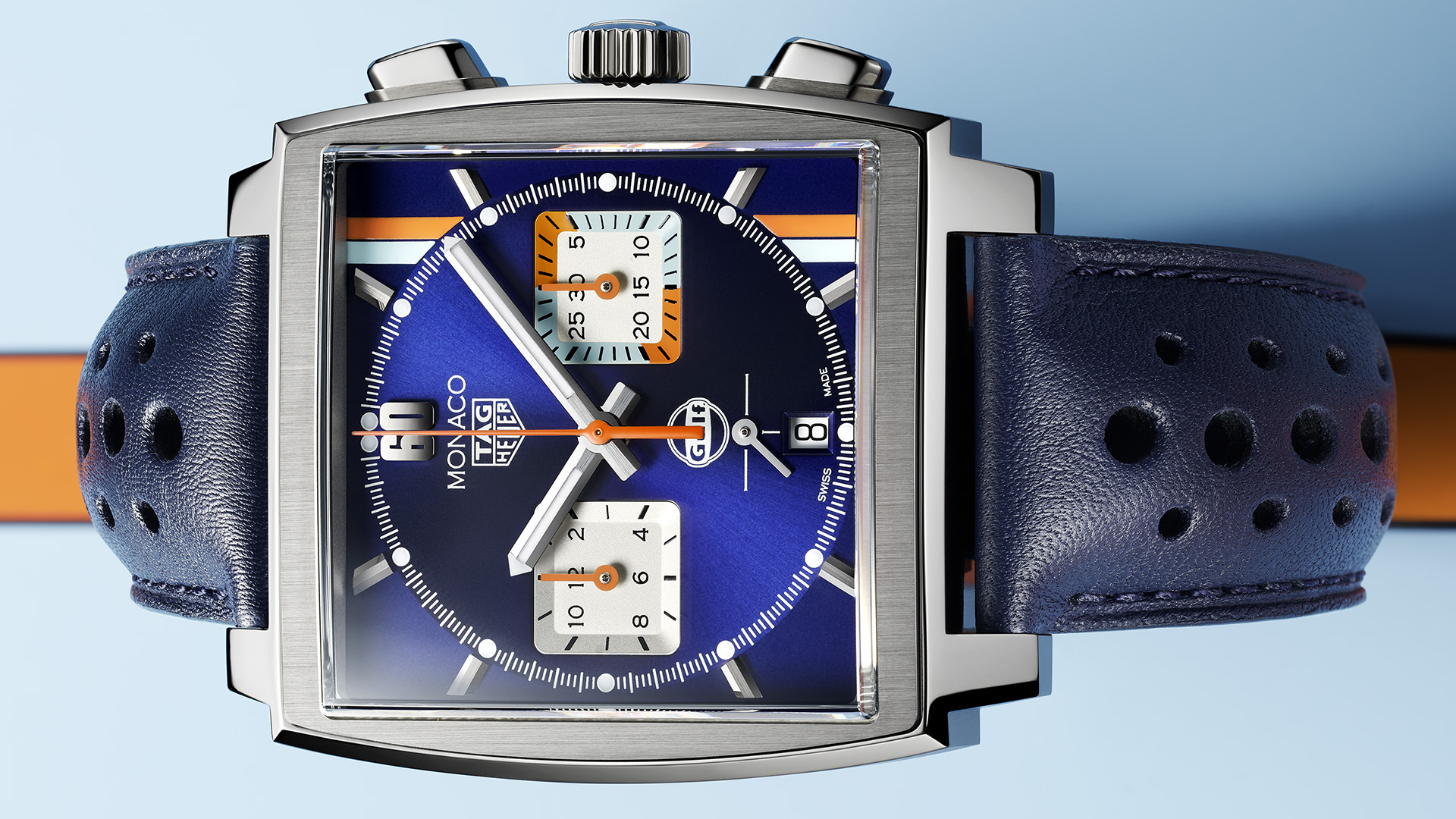 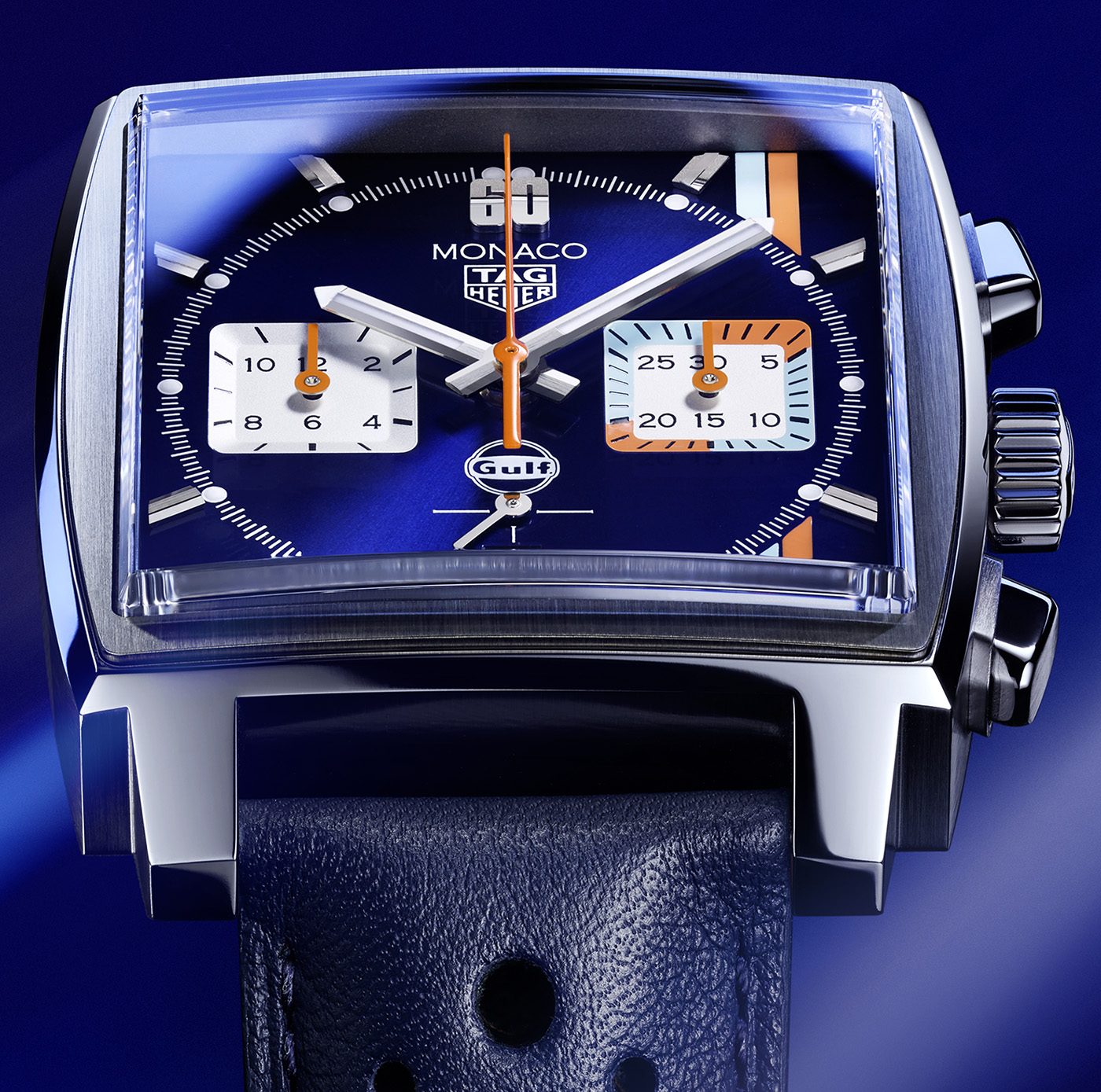 In the pantheon of classic racing liveries, few if any are as evocative and beloved as the pale blue and orange of Gulf Oil. The instantly recognizable color scheme has graced some of history’s most iconic race cars from the likes of Ford, Porsche, and McLaren, and stretched beyond the racetrack to become a beloved part of the TAG Heuer Monaco lineup. Gulf-themed renditions have been a staple of the TAG Heuer Monaco lineup since 2007, and as part of its Watches and Wonder 2022 novelties the brand brings this classic colorway to the recently-introduced Monaco Heuer 02 family for the first time. The new TAG Heuer Monaco Gulf Special Edition is the most mature, refined Gulf-themed Monaco execution to date, with a cleanly restrained colorway that complements the brand’s flagship in-house chronograph movement. 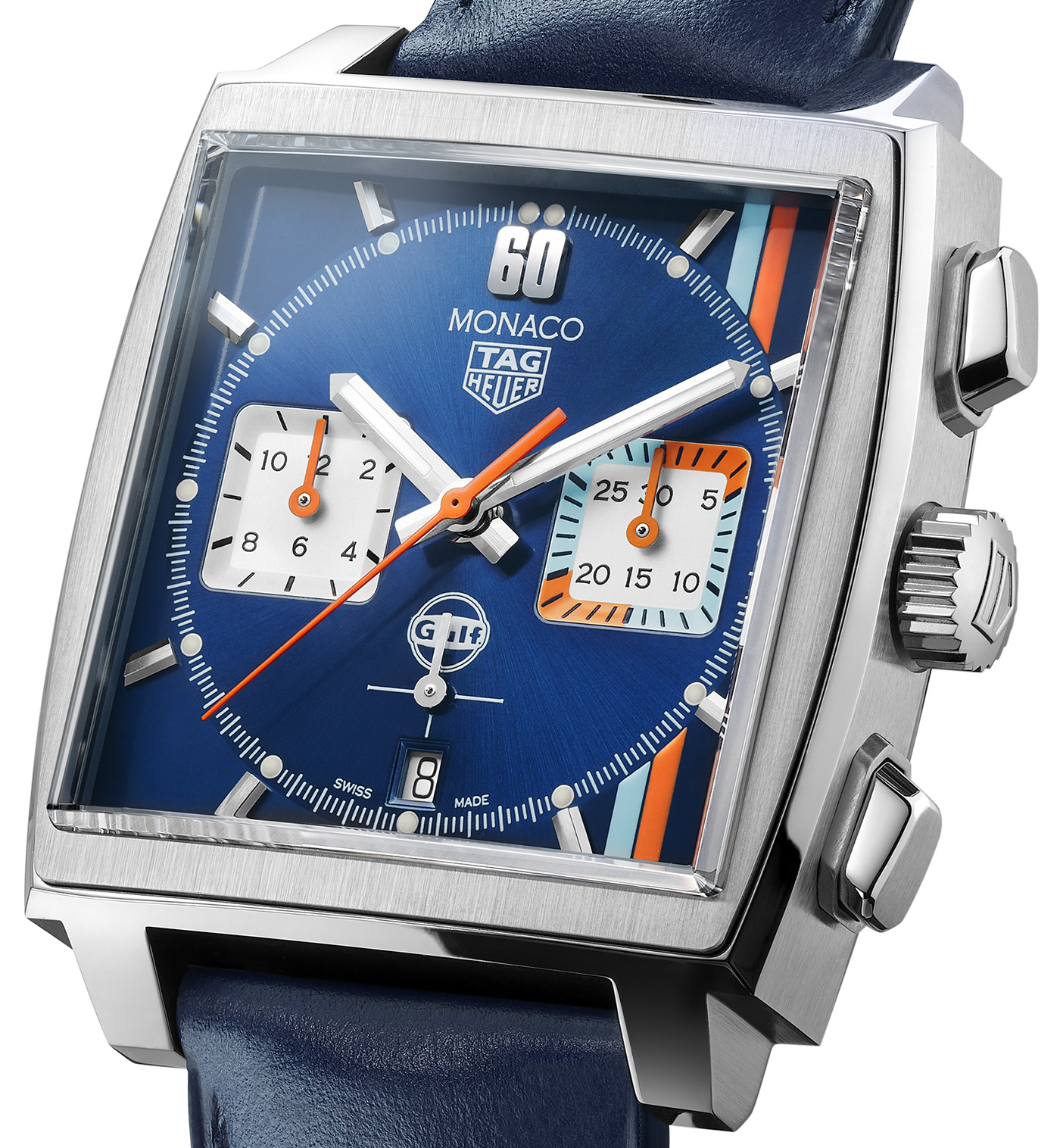 The 39mm stainless steel case of the TAG Heuer Monaco Gulf Special Edition is shared with the rest of the modern “right-hand crown” Monaco line, with its unmistakable square silhouette, broad polished oblong pushers, and a sapphire display caseback rated for 100 meters of water resistance. The Monaco Gulf Special Edition’s dial, on the other hand, is a remarkably fresh take on the Gulf Monaco formula. Past Gulf-themed iterations of the TAG Heuer Monaco have tended towards bold styling, with liberal use of the powder blue and signal orange color combination at the occasional expense of balance or visual cohesion. By contrast, the Monaco Gulf Special Edition’s dial is thoughtful and judicious with its use of the potentially overwhelming Gulf colorway in initial images. The main dial surface is the Monaco’s signature deep blue sunburst, lending the new design a familiar foundation. Like previous Gulf-themed Monaco iterations, this new model includes a double vertical racing stripe in the oil brand’s signature orange and blue, but here these colorful accents are slim and pared-back, acting as more of a complement to the design in images rather than the dominant element. The stripes are also split by the minutes track, allowing the functional main dial surface to continue without visual interruption in images. 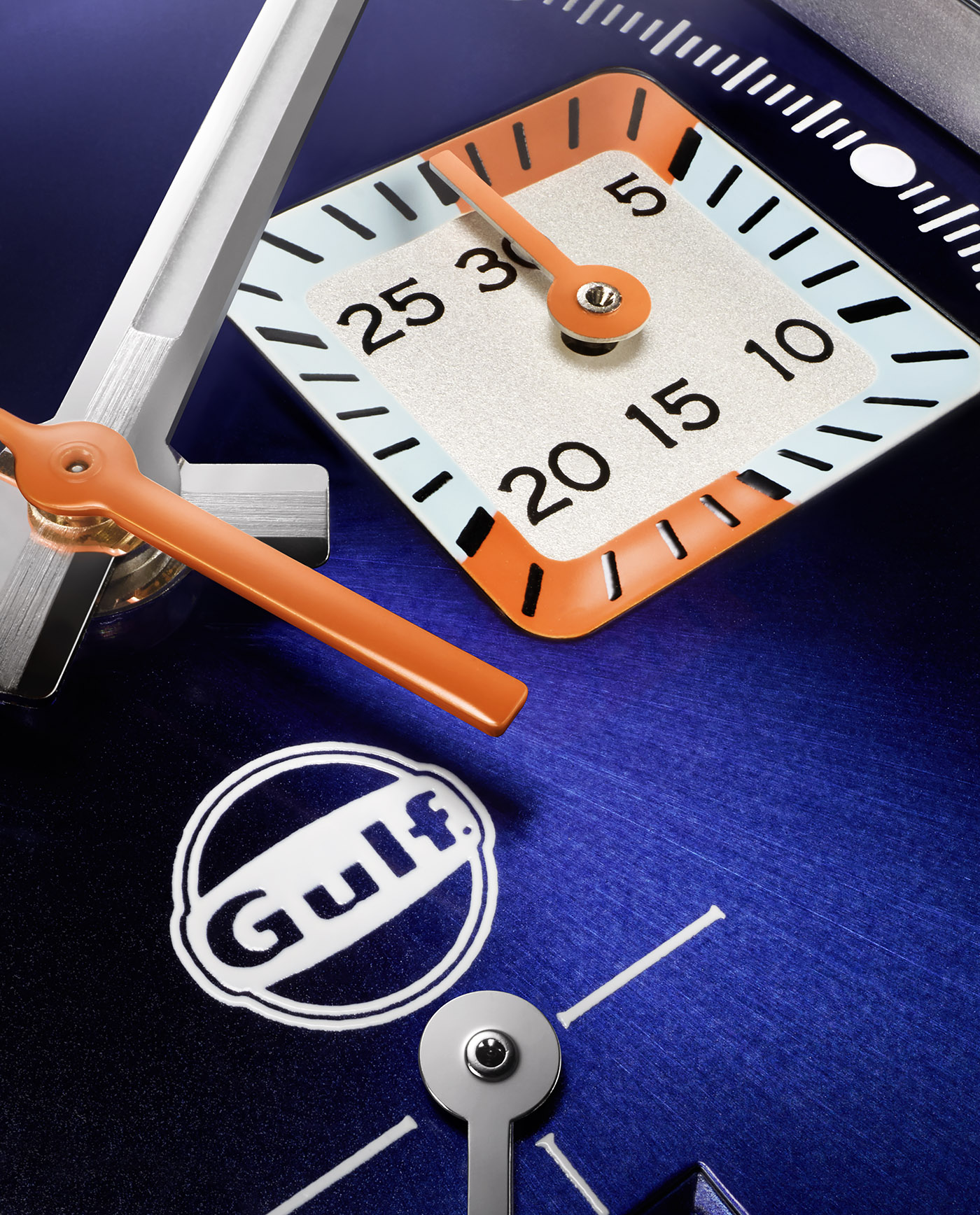 TAG Heuer cleverly brings more Gulf color into the Monaco Gulf Special Edition’s dial design via the 3 o’clock chronograph minutes subdial, dividing up the sloping outer scale into alternating pale blue and orange quadrants. It’s a remarkably well-considered design choice, fitting seamlessly into the traditional Monaco layout while both delivering additional sporty color and fitting in with the late ‘60s and early ‘70s chronograph design ethos that first gave rise to the Monaco series. There are similar colored-sector subdials throughout that era of watchmaking, including several from Heuer itself, and while the Monaco never sported one at the time it feels like a natural offshoot of the design in images. The brand’s subtle change from the standard Monaco’s red chronograph hands to Gulf orange versions also works well to create a cohesive feel for the dial overall. The rest of the dial design is strikingly pared-back, with the Gulf logo rendered for the first time in simple white and integrated into the minimal 6 o’clock running seconds subdial. This placement and monochrome treatment acts as an effective visual counterweight for the 12 o’clock printed TAG Heuer emblem in images, making this potentially the most balanced Gulf-themed Monaco design to date. TAG Heuer adds one last nod to the two brands’ shared racing heritage at 12 o’clock, where the Monaco’s usual applied index is replaced by applied rhodium-plated “60” numerals with a bold athletic typeface inspired by the number roundels on the Gulf-sponsored Porsche 917s of the early ‘70s. 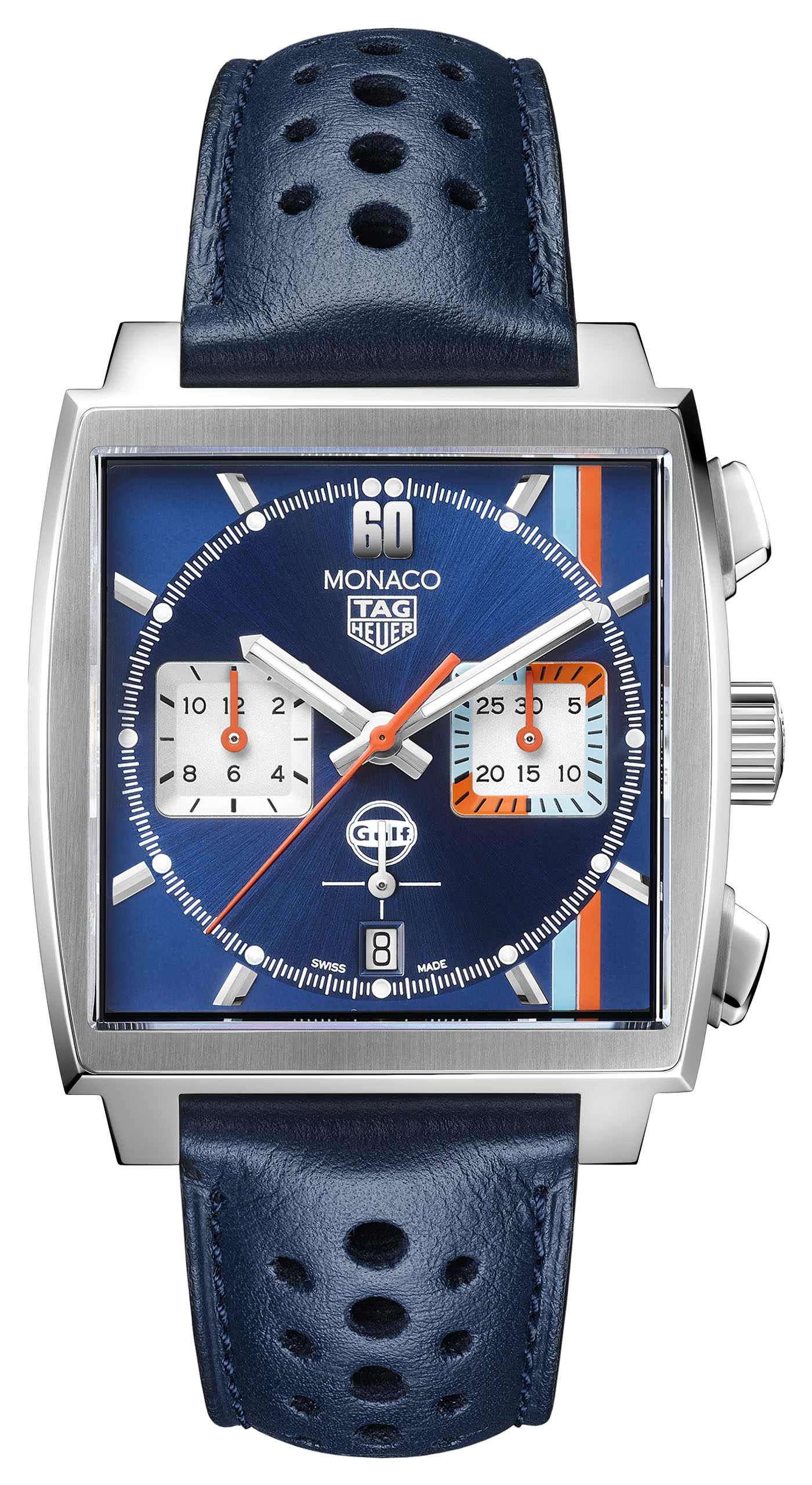 TAG Heuer powers the Monaco Gulf Special Edition with its in-house Heuer 02 automatic chronograph movement. The Heuer 02 has been a mainstay of the right-hand-crown Monaco line since late 2019 and remains a thoroughly modern powerplant with performance to match. Attractively finished with broad Côtes de Genève across both the bridges and the black skeleton rotor, the Heuer 02 offers a massive 80 hours of power reserve at a 28,800 bph beat rate alongside a vertical clutch and column wheel chronograph actuation system. TAG Heuer finishes the Monaco Gulf Special Edition with a classic small hole rally strap in navy blue calfskin.