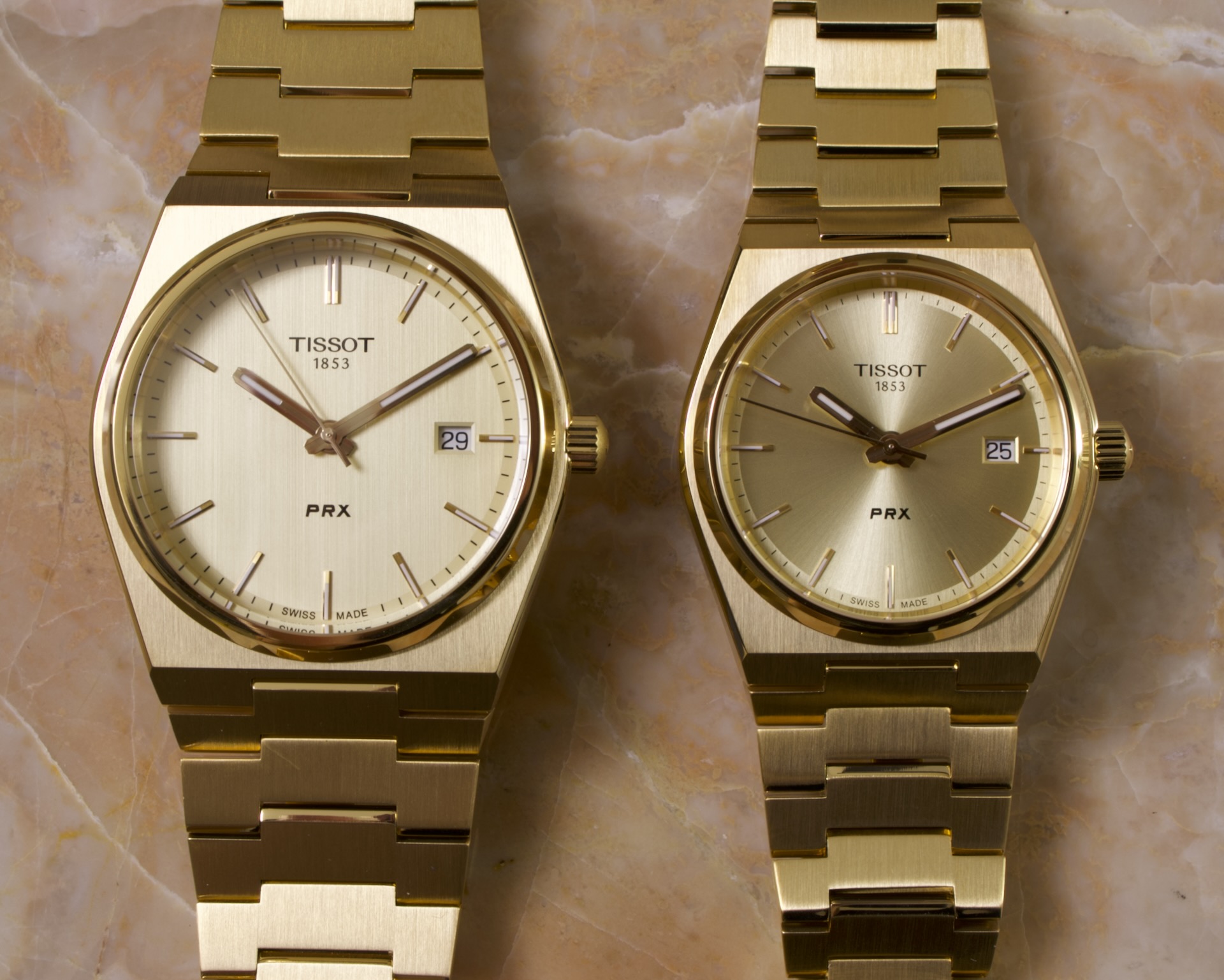 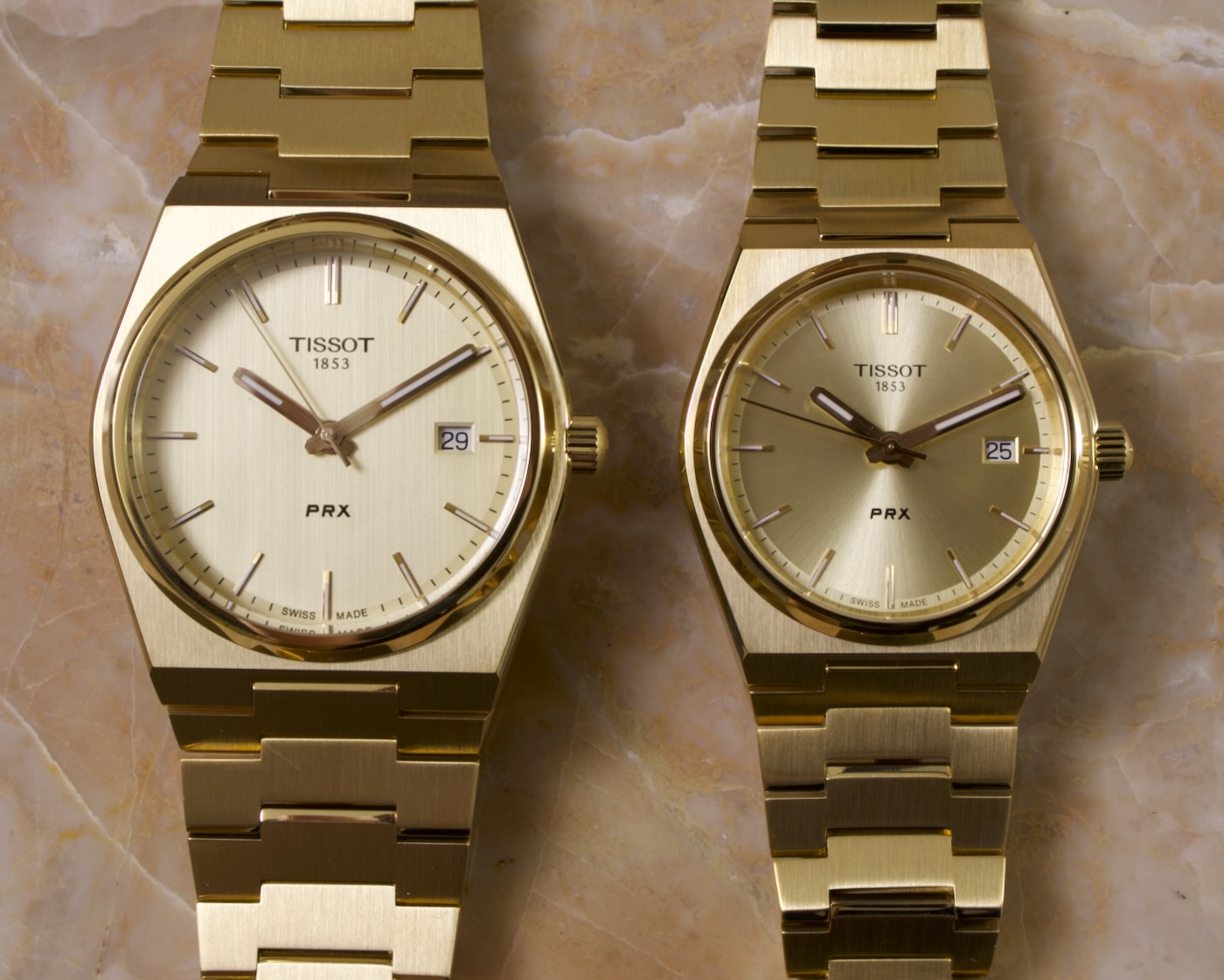 When Tissot re-released the PRX in 2021, the brand captured lightning in a bottle — finding that elusive combination of style, quality, value, and nostalgia that makes for an instant hit. To say that the PRX has been a success would be a vast understatement. As a brand that has often flown a bit under the radar within the enthusiast community, the PRX managed that rare feat of appealing to both the watch enthusiast crowd and mainstream consumers. By offering both quartz and automatic versions of the PRX in a wide range of sizes and colorways, Tissot seems to have a PRX for every taste. For those keen to go full-in on the 1970s vibe, the gold tone PRX is just the ticket. 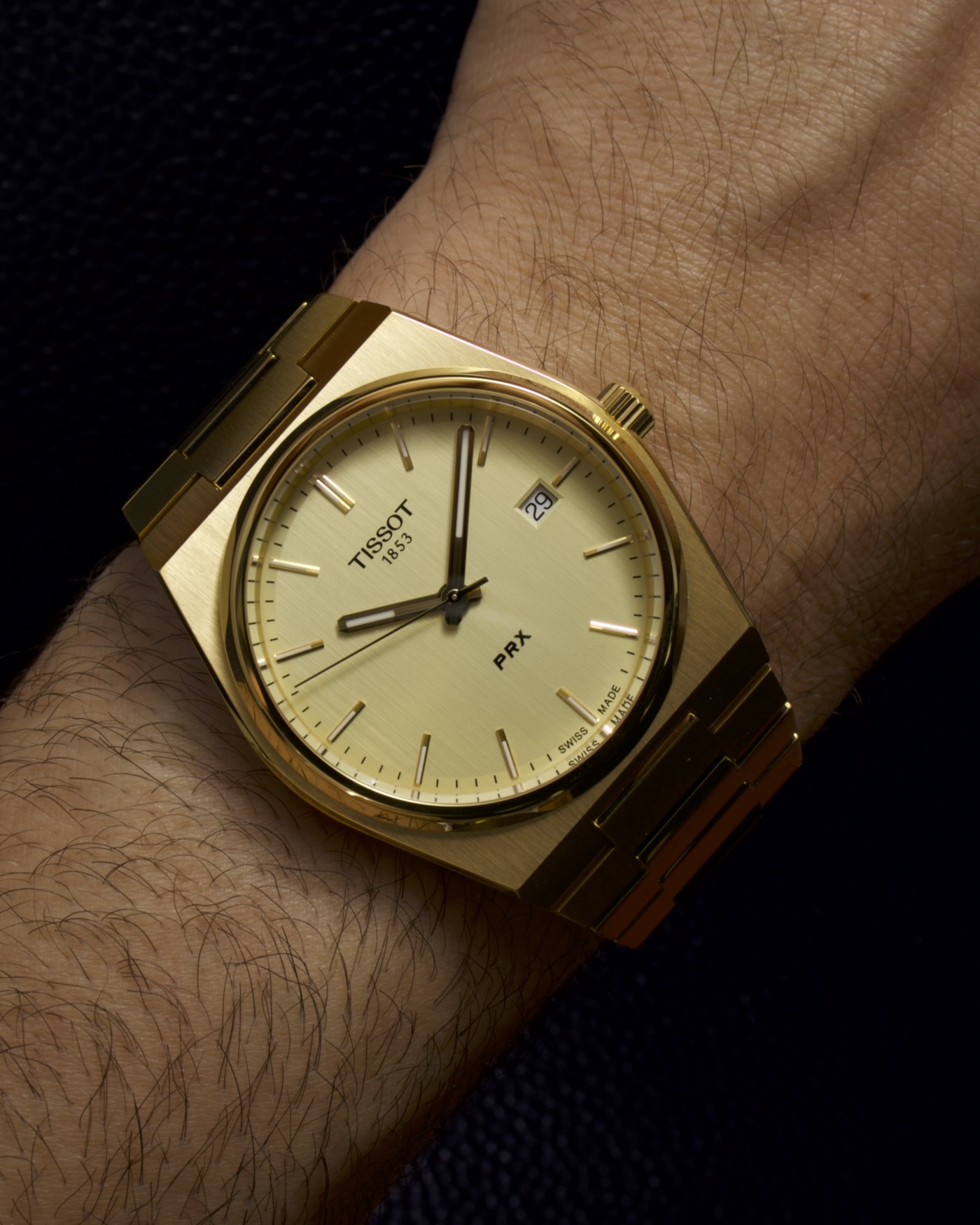 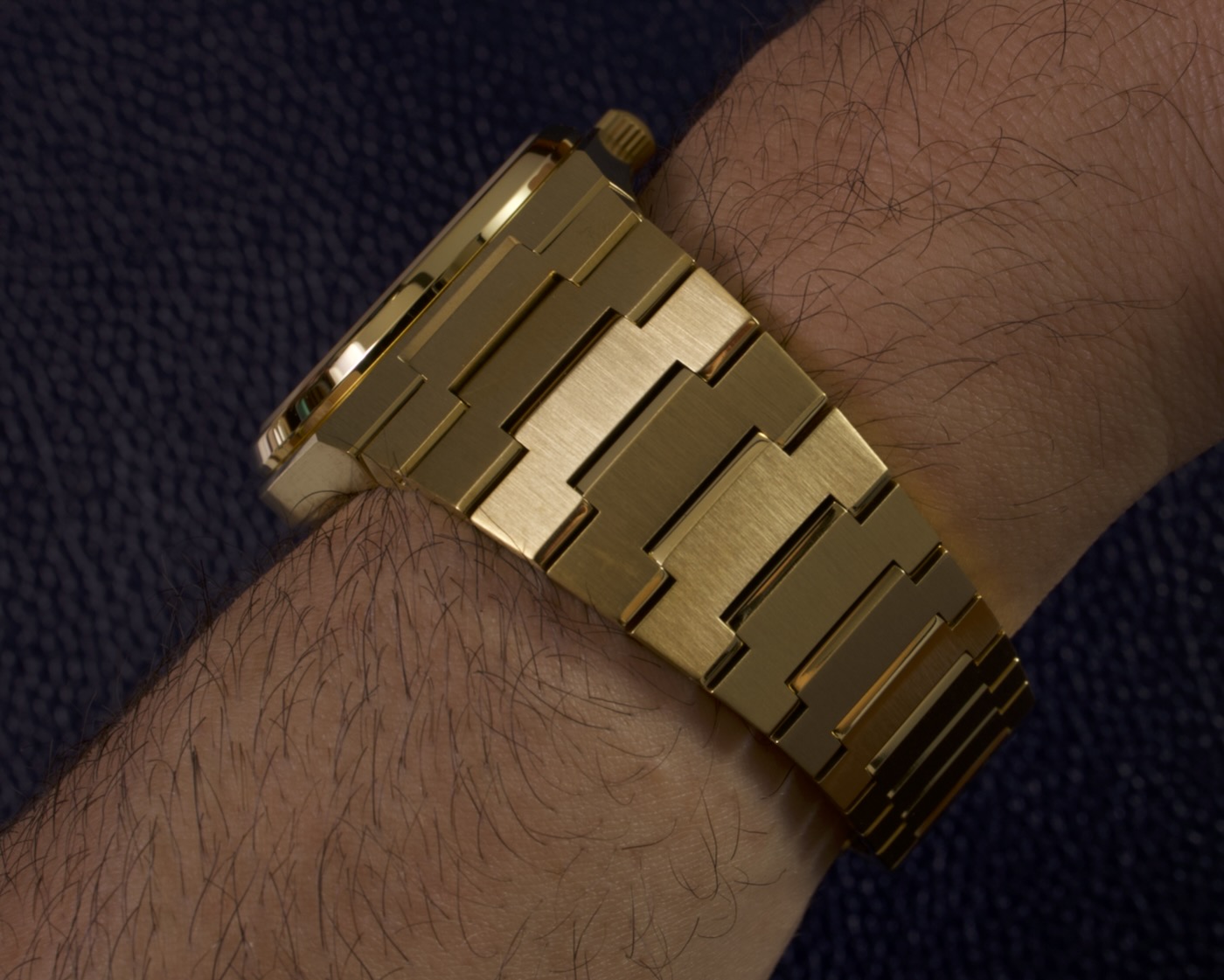 With a history that dates back to the mid 1800s, Tissot has plenty of watches in their back catalog to choose from, but luckily for us, Tissot realized that their PRX from the ’70s should be first in line for its Lazarus moment. Originally released in 1978, the PRX — standing for precise, robust, and the Roman numeral X for ten, a reference to its 10atm of water resistance — was fully on-trend for the 1970s. With an integrated bracelet, durable construction for everyday wear, and funky dials, it checked every box on the list for the era. There are plenty of trends from the late ’70s that should never again see the light of day (think disco), but when it comes to watches, the era was full of experimentation and, ultimately, fun design. To that end, the PRX certainly fits the bill. 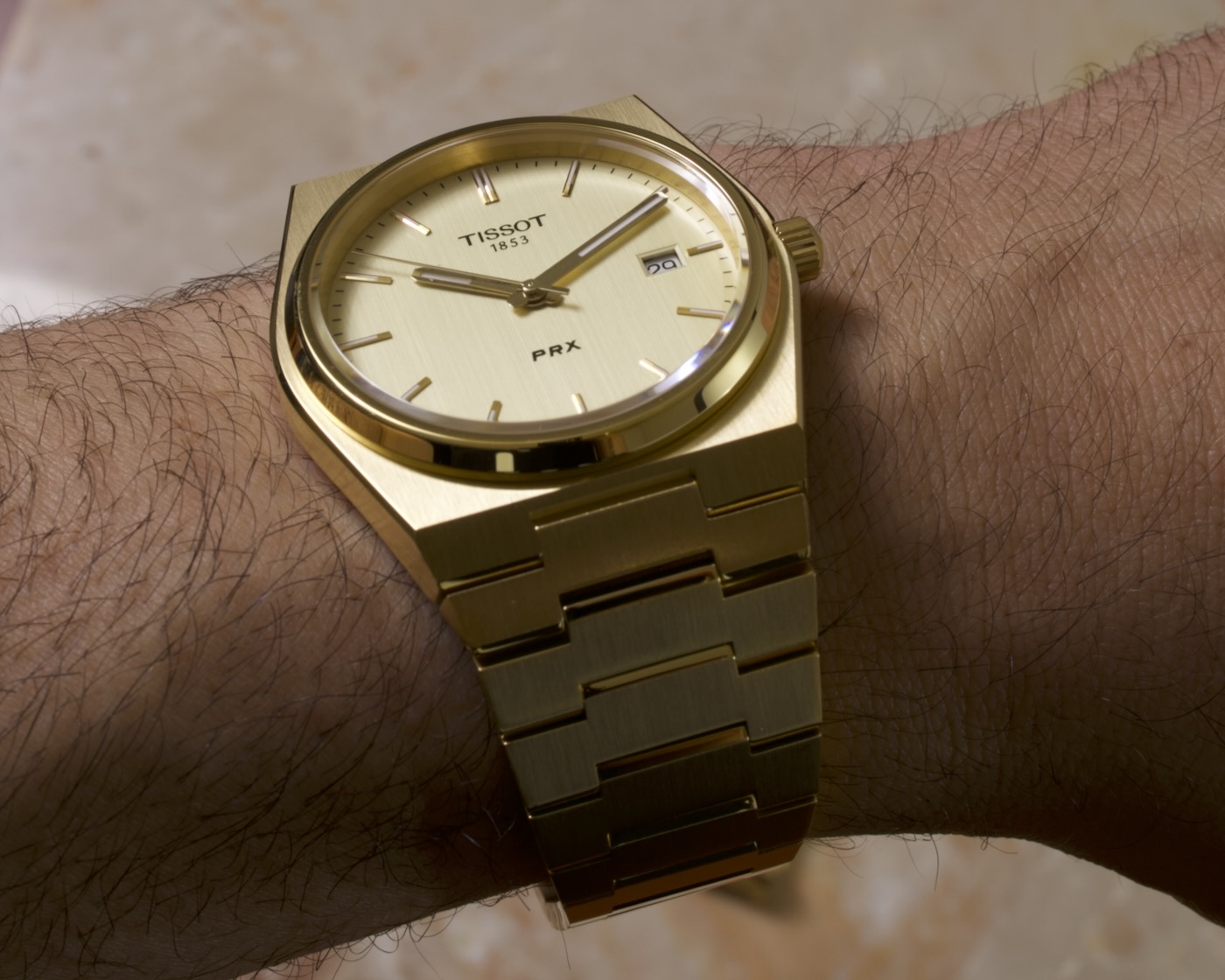 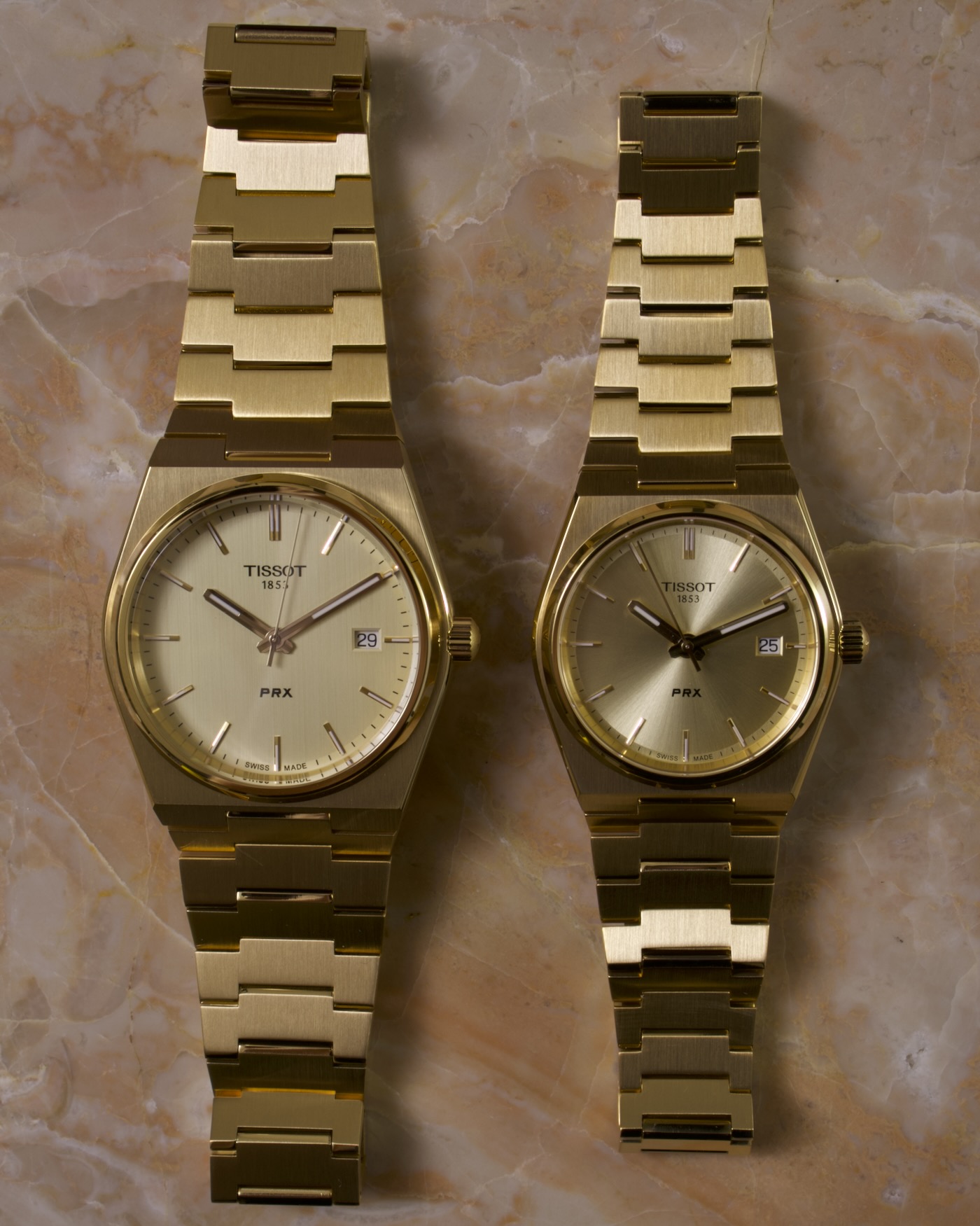 Stainless steel versions of the PRX, in both automatic and quartz, have been rolled out in an array of colors, including a version with an 18k gold bezel. However, if you’re looking for full-on 1970s funk, gold is the only way to go. Available in both the classic 40mm and a smaller 35mm diameter, the gold-tone PRX case and bracelet are crafted from 316L stainless steel, but finished with a yellow gold PVD coating. Complementing the case and bracelet is a champagne dial with a gold-tone handset. It’s a whole lot of gold, but that’s exactly the point of this watch. It’s a statement watch, not one that will fly under the radar. 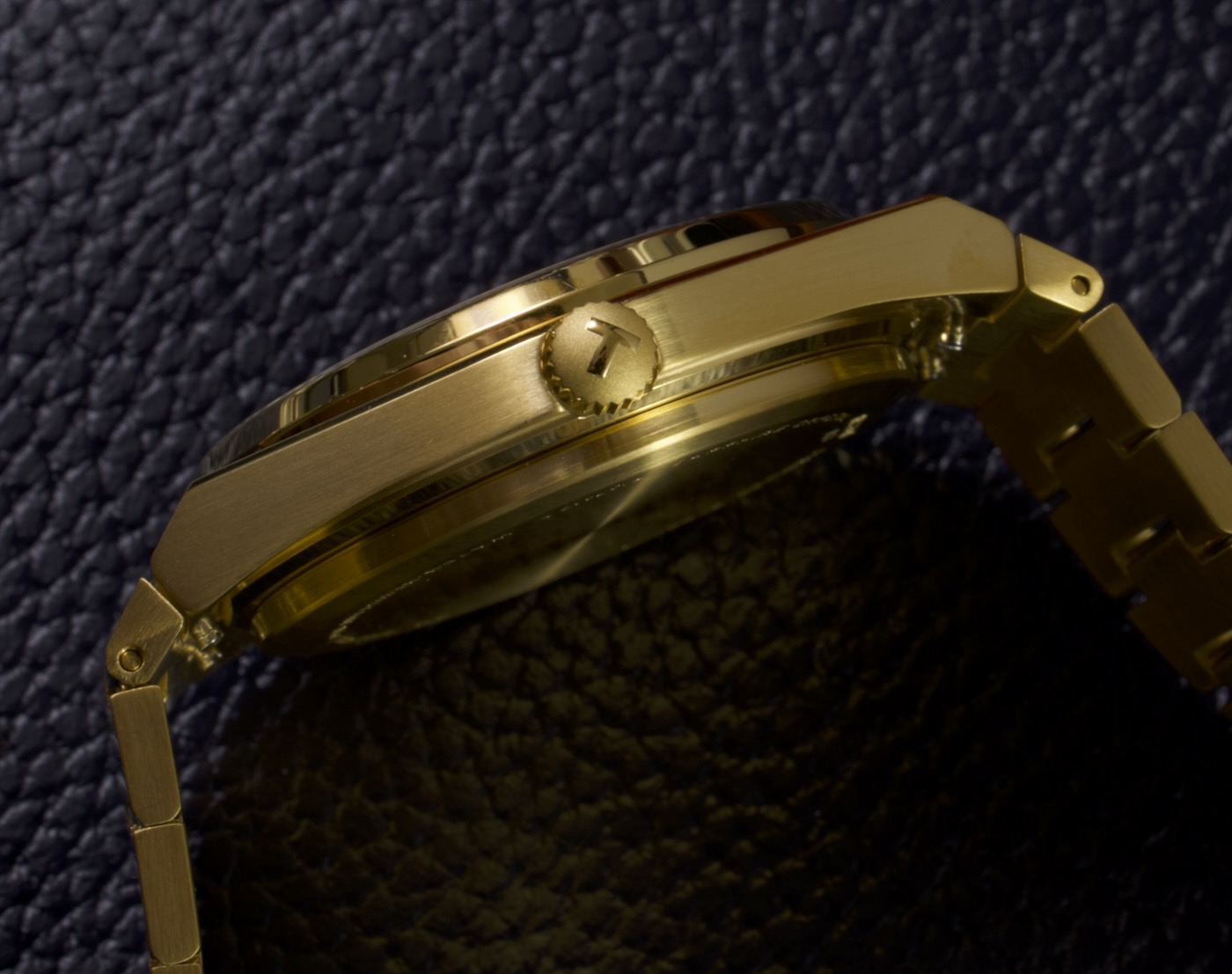 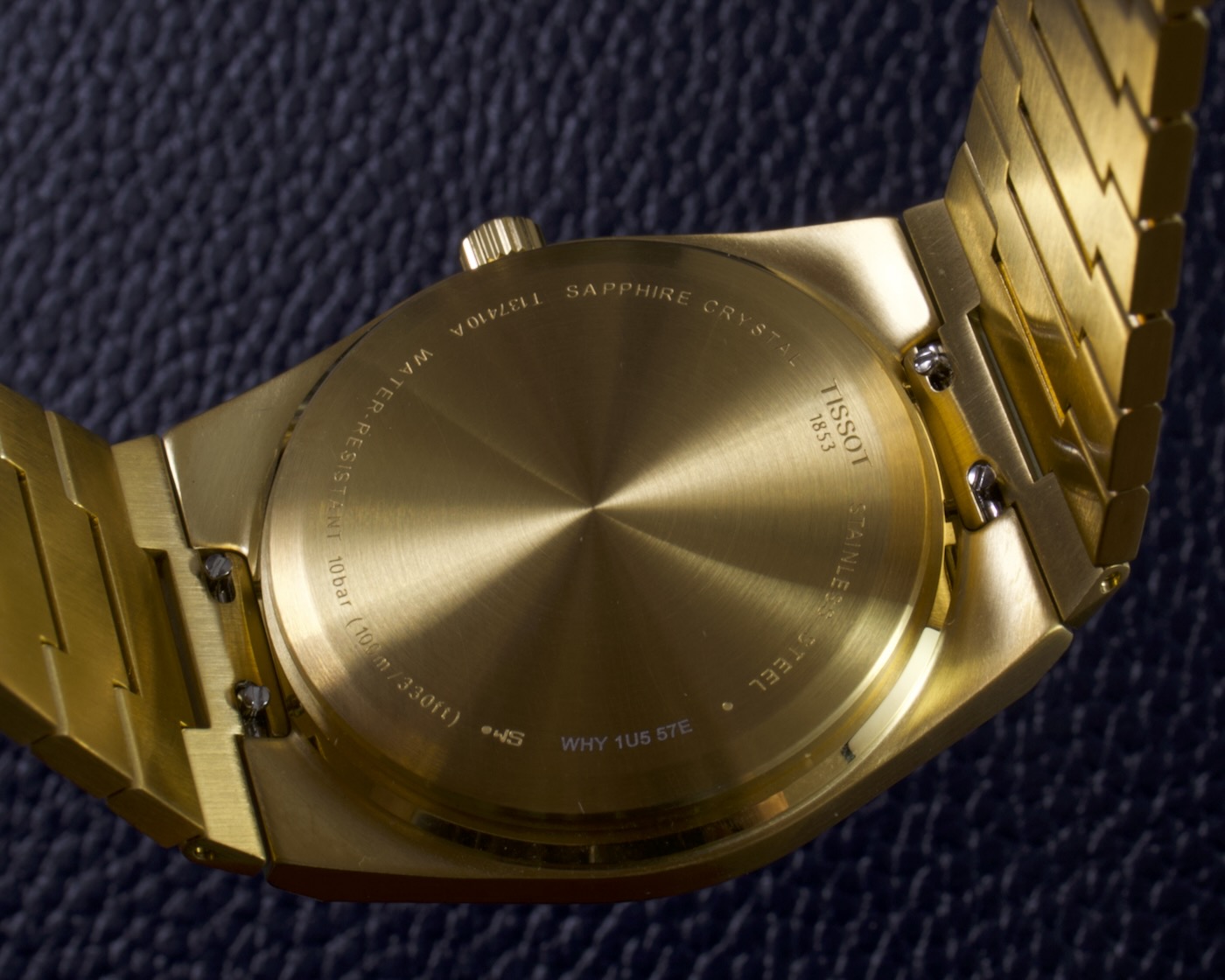 One of the things that’s made the PRX line so appealing is its comfort and dimensions. The 40mm-diameter version clocks in at 10.4mm thick with super-short 39.5mm lug-to-lug distance, owing to the case shape and use of an integrated bracelet. The 35mm PRX is even slimmer at 9.6mm, and has a similarly short lug-to-lug distance of 34.6mm. When combined with the sharply tapering and smoothly articulating bracelet, the result is a watch that’s extremely comfortable on the wrist, regardless of whether you prefer the larger and more eye-catching 40mm or the more compact 35mm version. 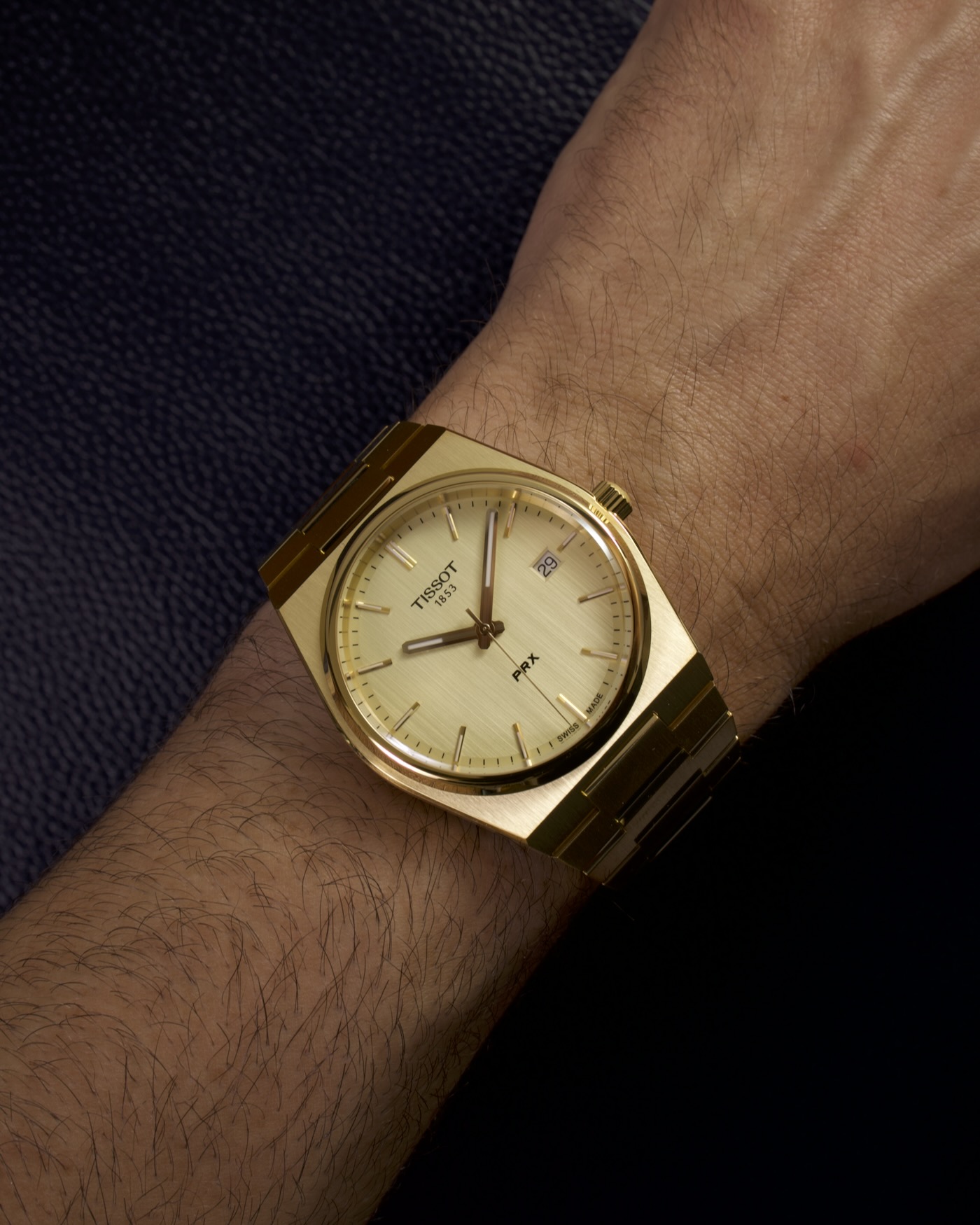 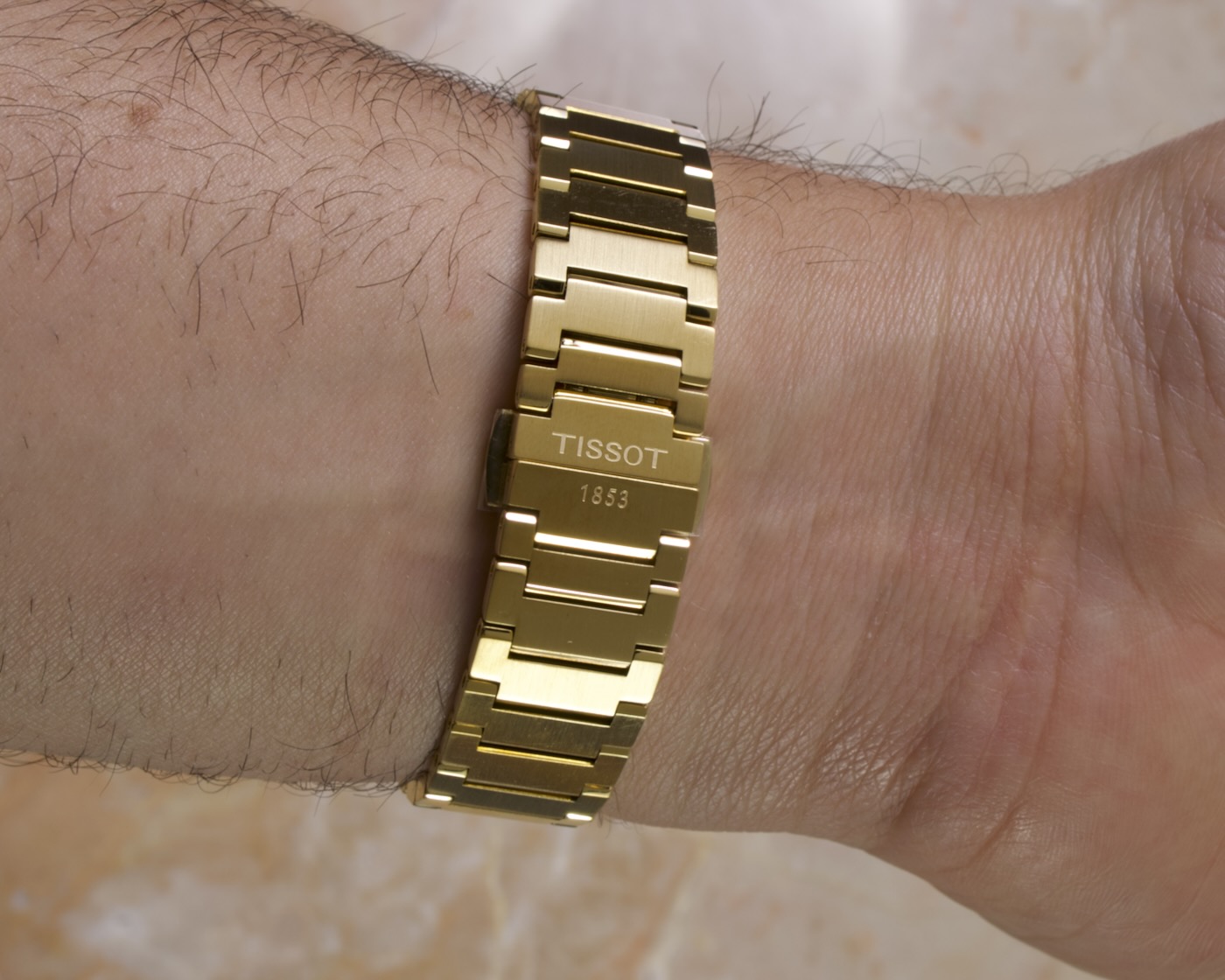 The gold tone PRX is equipped with a Swiss made ETA quartz movement. The choice to go with quartz was a smart move. Although this is a watch that will certainly appeal to a segment of the market as their go-to watch, it’s also likely to appeal to some gold-curious enthusiasts or fans of ’70s design that are looking for something a bit funky with loads of personality. Given the overwhelming response to the Vacheron Constantin 222, there’s clearly an appetite for this style of watch, but most of us aren’t ready to throw down tens of thousands to pickup a 222 — even if we were able to get our hands on one. The gold tone PRX is here for anyone looking for classic late ’70s styling, in all its gilded glory, without breaking the bank. The style won’t be for everyone, but at $450 USD for both the 35mm and 40mm versions, they’ll undoubtedly be finding their way on to plenty of wrists. To learn more about Tissot and the PRX, please visit the brand’s website.