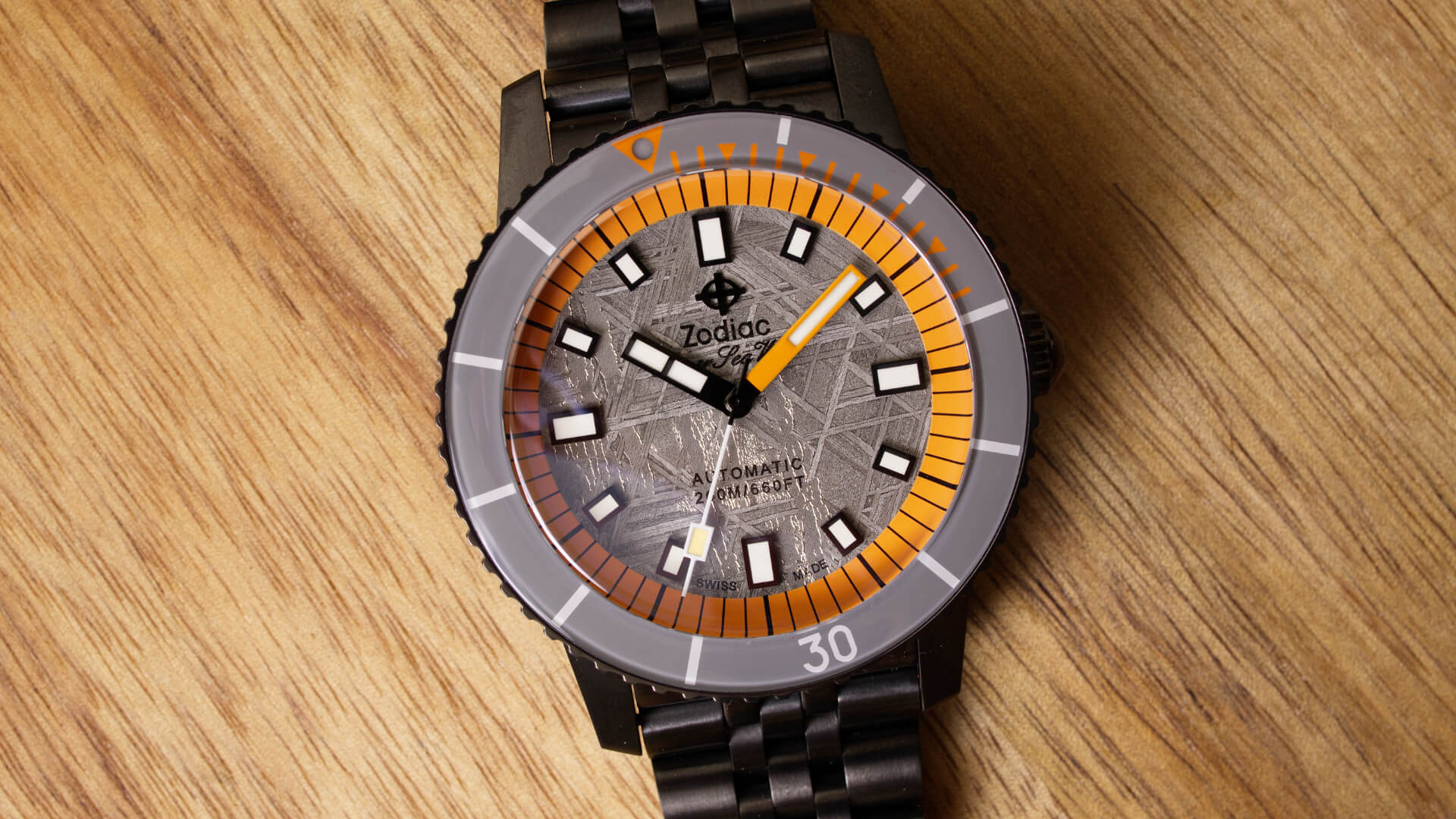 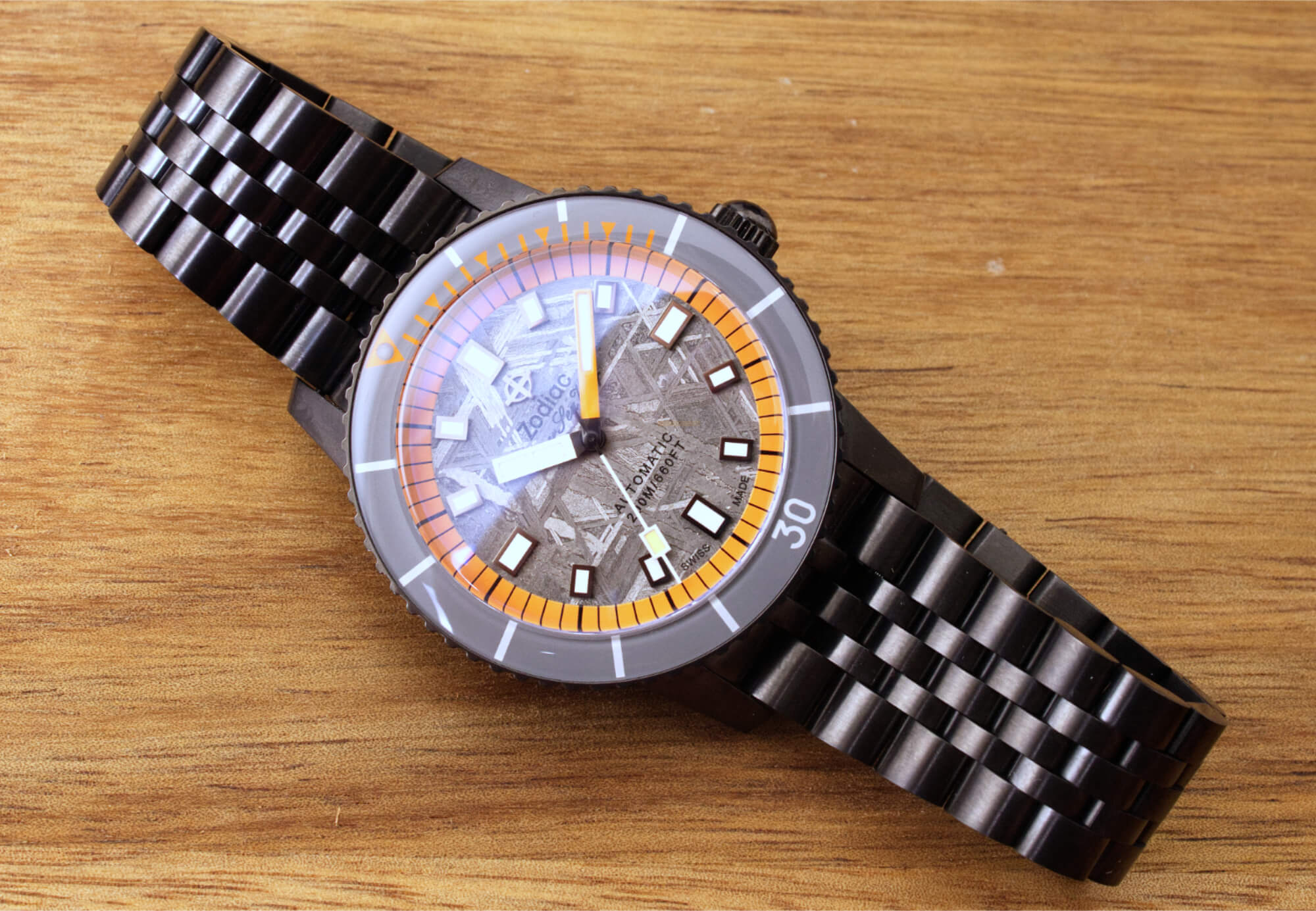 Two things appear to underpin the bulk of Zodiac‘s marketing strategy: the Super Sea Wolf collection and novelty. Anyone who’s been paying attention to the brand these last few years will recall a slew of bold, colorful dial variations, some full-scale production models, some highly limited. There’s also a willingness, perhaps even an eagerness, to collaborate with others (including our own Ariel Adams). During a recent chat I had with Mike Pearson, the head of Zodiac Watches, he was effusive not just about the watches, but also about the family of retailers; he considered their stories just as valuable as the brand’s. It’s no surprise, then, that Zodiac has teamed up with Watches.com, a long-time authorized dealer of the brand’s watches, for another spin on the Super Sea Wolf. 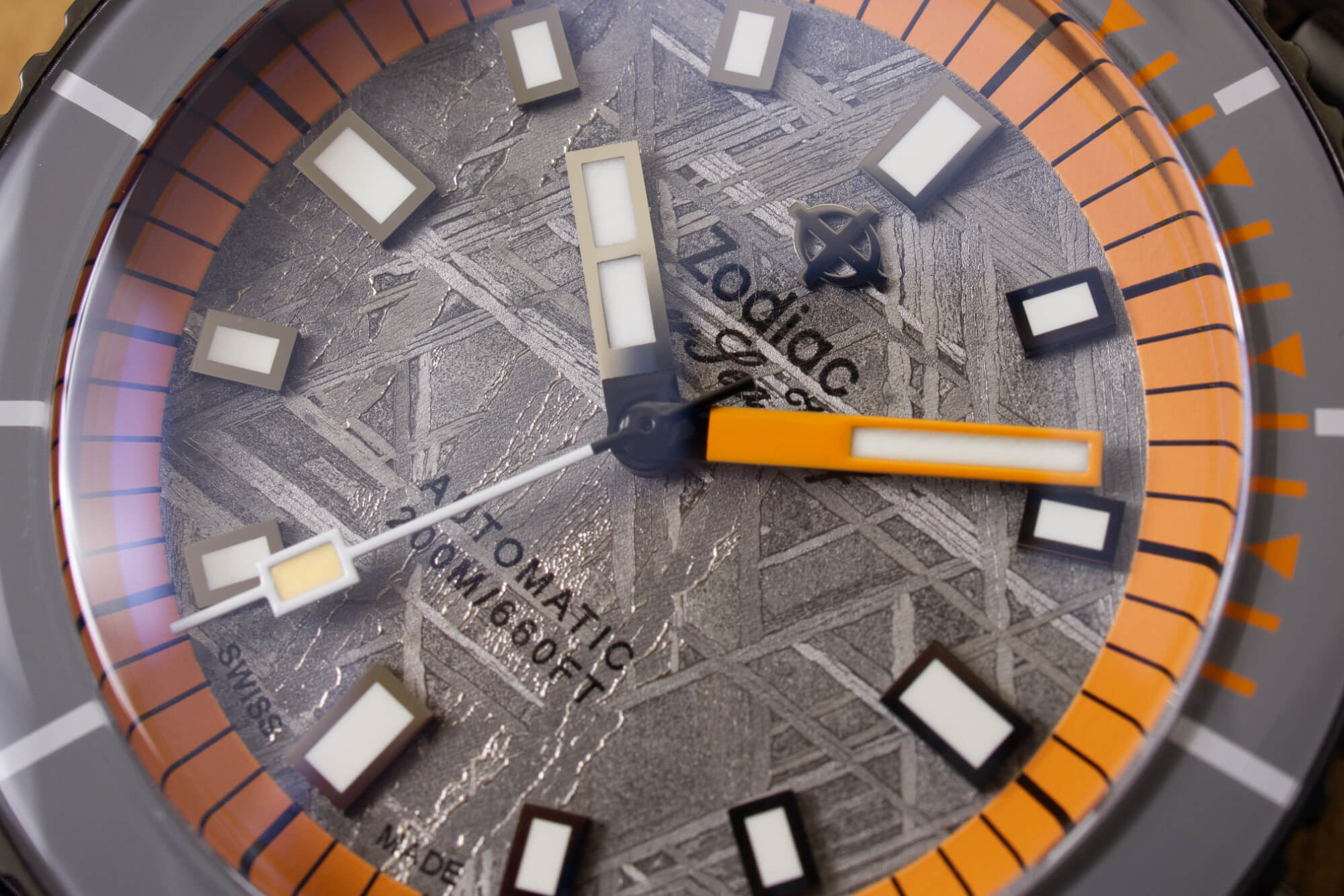 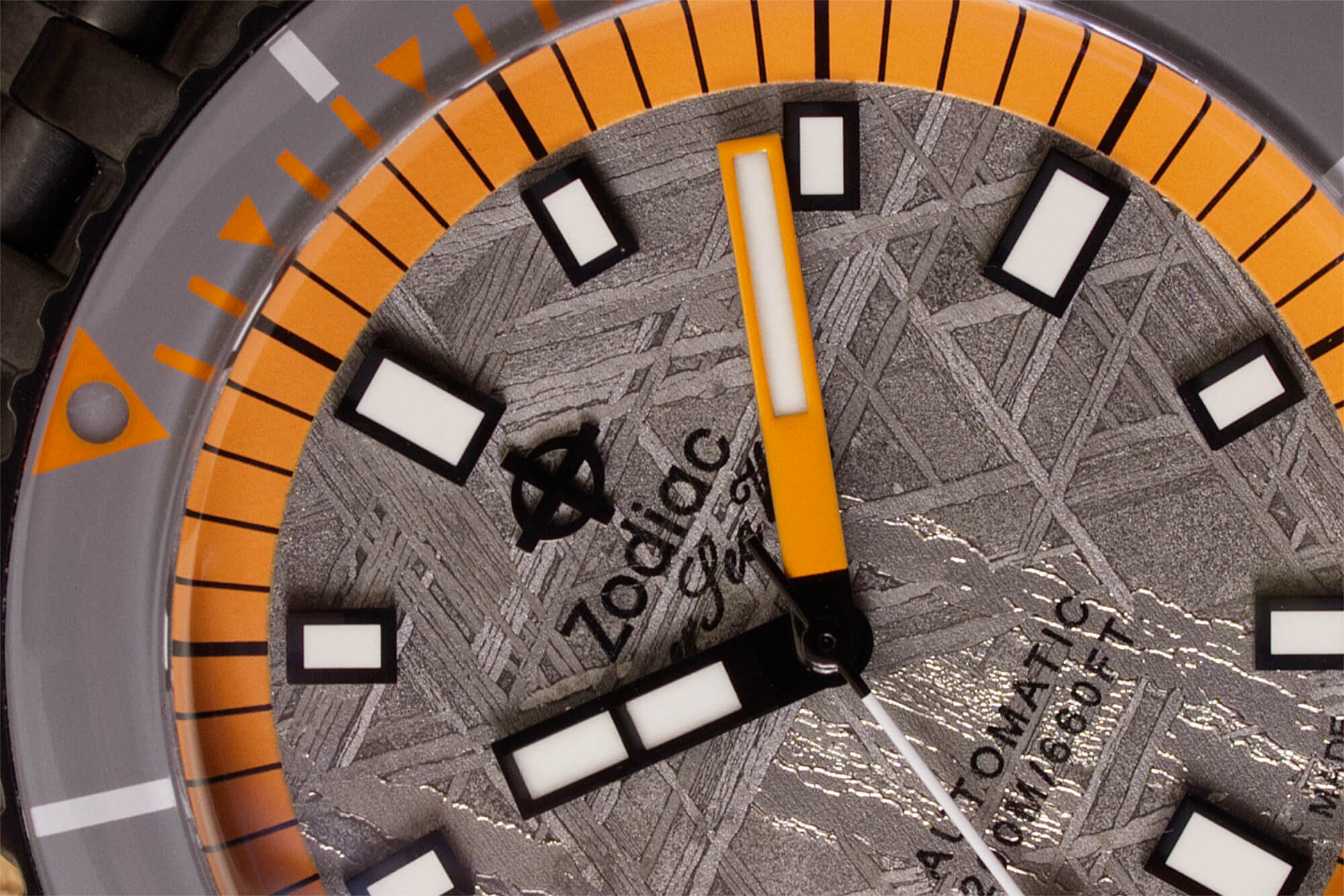 Opting for something “out of this world,” the two parties built a variant around a meteorite dial. Now, meteorite isn’t anything new on watch dials, and I’d go as far as to argue it’s becoming a bit played out—it’s available at every price point, and claims cannot any longer be made regarding uniqueness. While it may no longer carry the appeal of rarity, there is no denying the beauty of meteorite, with its organic crosshatching pattern (technically called Widmanstätten patterns or Thompson structures) and striking luster. The meteorite in this model is from the 800,000-year-old Muonionalusta Meteorite found in Sweden. Zodiac and Watches.com pulled out the warmth of the rock nicely with orange highlights on the hour hand, chapter ring, and bezel. All the hands and markers, as well as the bezel pip, are treated with Super-LumiNova and shone brightly during my brief time with the watch. One of the standout features of the Super Sea Wolf series is the bezel itself, often color-matched to the dial, which combines a rounded mineral crystal with a painted bottom layer to recreate the appearance of vintage Bakelite bezels. It operates easily, with a pronounced ridging that overhangs the rest of the case. 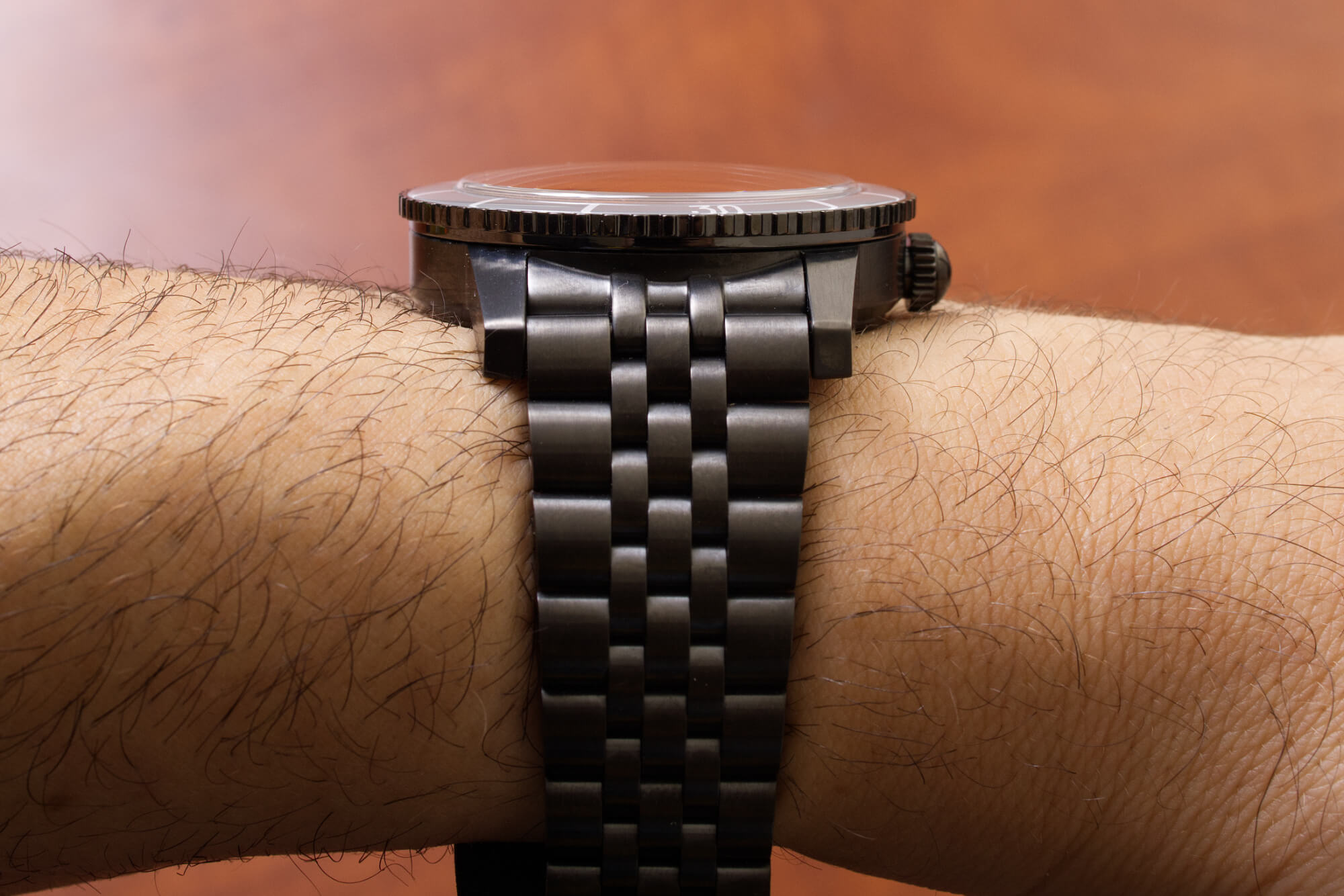 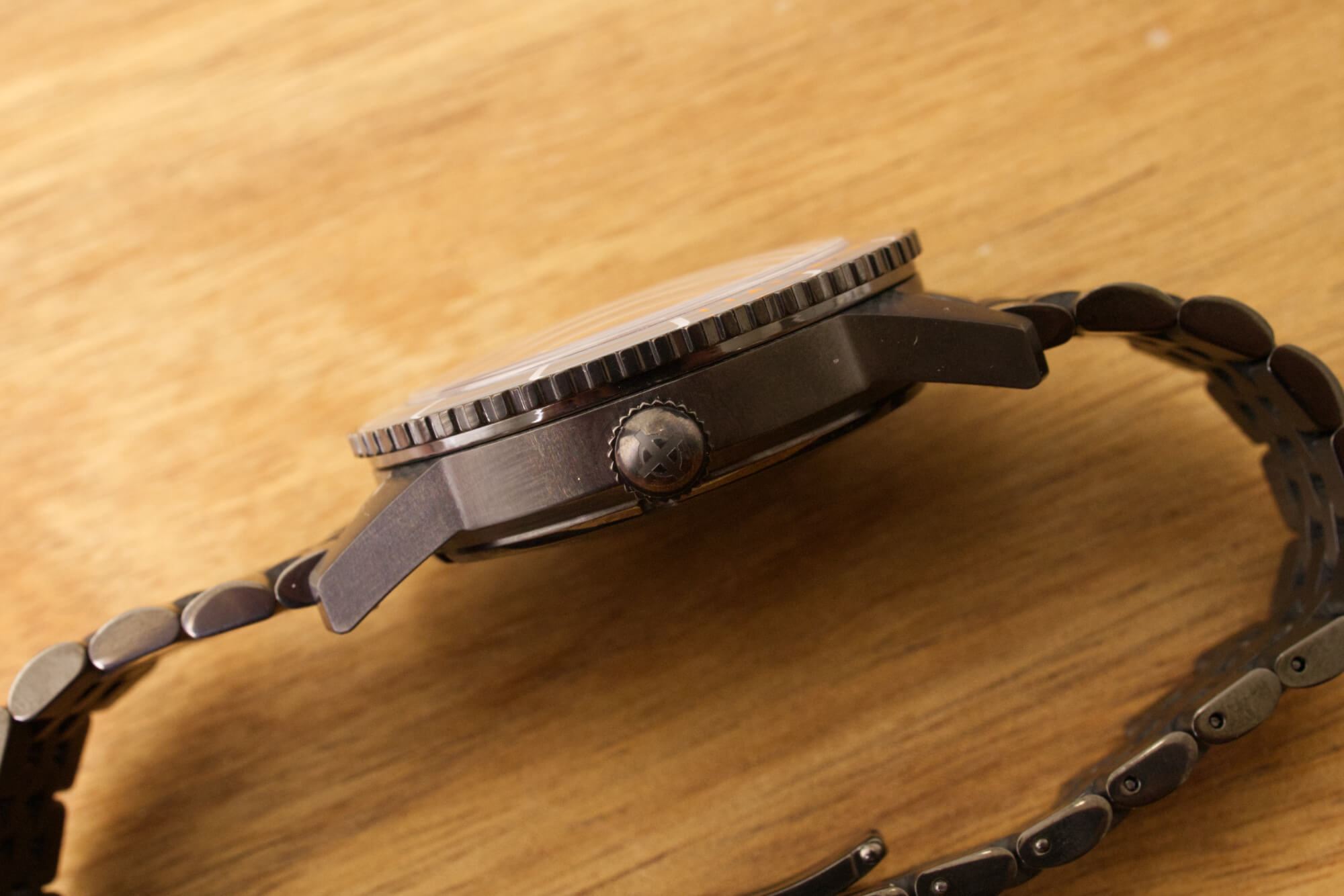 The 40mm case is 13.4mm thick and, along with its bracelet, is coated in satin-brushed black DLC, giving it an edgier look than its siblings, which are often predominated by a polished finish. It also goes better with the colorway than I think a polished steel case would, allowing the more muted gray to actually stand out, rather than be diminished by gleaming steel. The screw-down crown has decent grip and helps to ensure 200m of water resistance. The form of the case is rather angular, which, while contrasting with the bulbous bezel, is complemented by the sharper lines of the indices and hands. The jubilee-style bracelet, while comfortable, has an odd look where it meets the case; the roundness of the links, to my eyes, is out of place against the straight, blocky lugs. That said, the bracelet is comfortable, and if you can get a good fit with the butterfly clasp, you’ll find the watch wears nicely on the wrist, aided a bit by the beveled edge on the underside of the case and the slightly convex caseback. 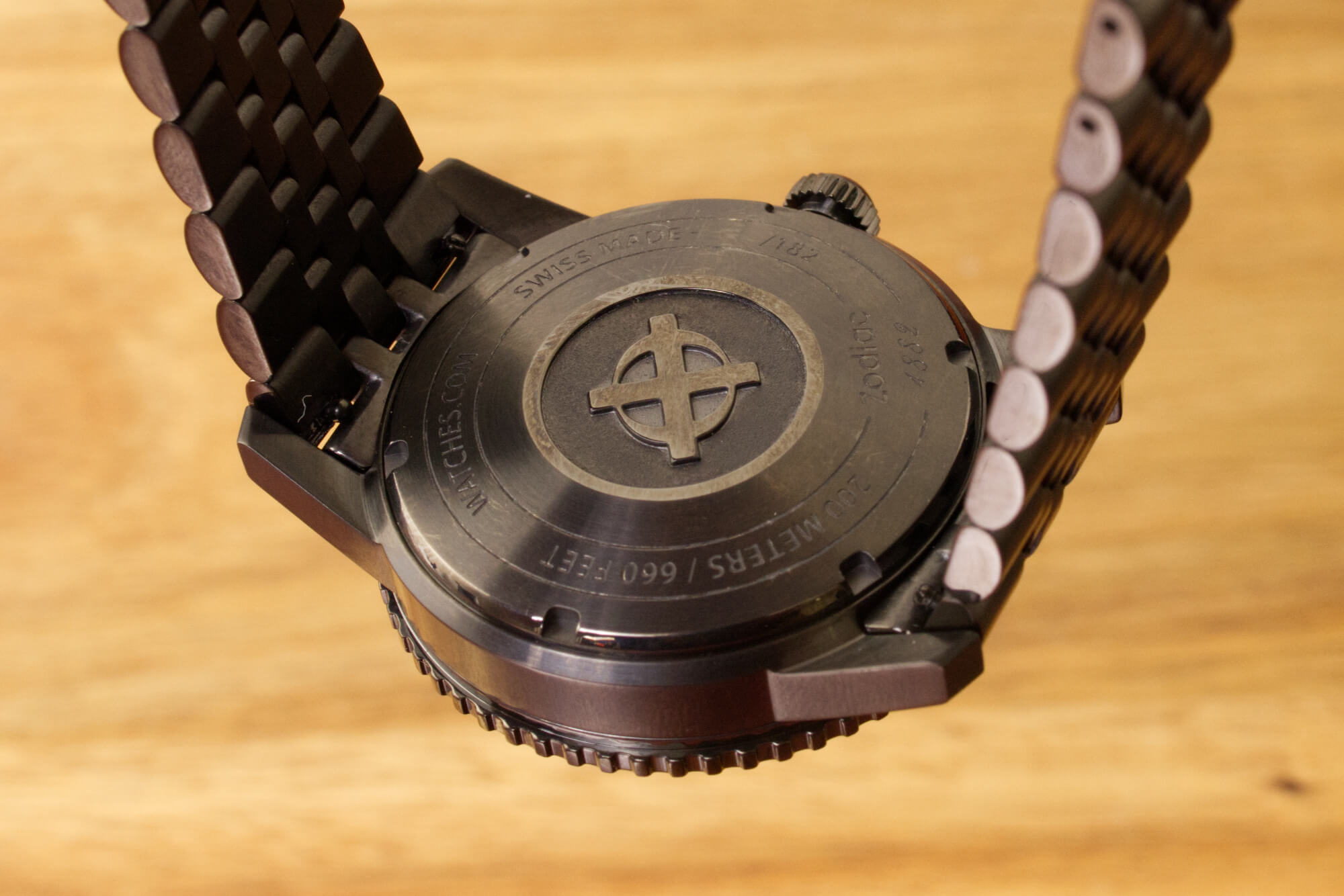 The screw-down caseback of the Zodiac x Watches.com Super Sea Wolf Meteorite doesn’t offer a flashy limited design, but a restrained cobranding, with the same DLC applied to the steel. Like most of the Super Sea Wolf line, this model is equipped with the STP1-11 (STP being the Swiss movement manufacturer owned by Zodiac’s parent, Fossil). The STP1-11 has started getting more widespread use amongst brands in this price range, and it features a 4hz or 28,800 vph frequency, 26 jewels, and a power reserve of 44 hours. A hacking mechanism ensures to-the-second time setting. In my experience, this is a solid movement that won’t cause you any issues, and it clearly makes sense for Zodiac to use a movement from within its family. 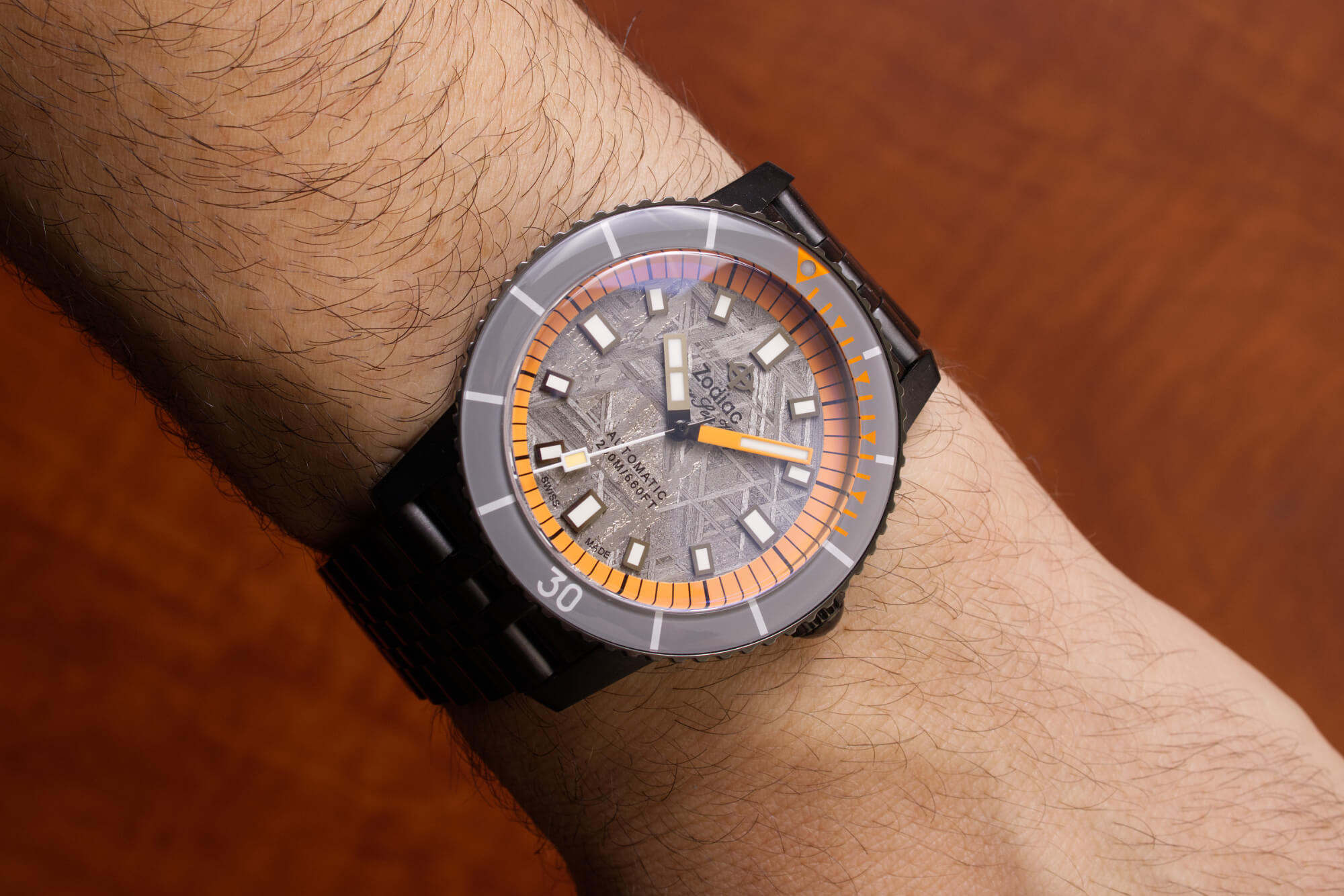 Having owned a non-limited version of the Super Sea Wolf, I can attest to how well it wears and how appealing the design is. Add to that an engaging meteorite dial and a well-matched DLC case and bracelet, and I think this is a winning combination. It’s another appealing collaboration in the Super Sea Wolf lineup, a collection that already has a slew of exciting variants. The Zodiac x Watches.com Super Sea Wolf Meteorite is priced at $1,795 USD and is limited to 182 pieces. For more information, please visit the brand’s website or Watches.com.