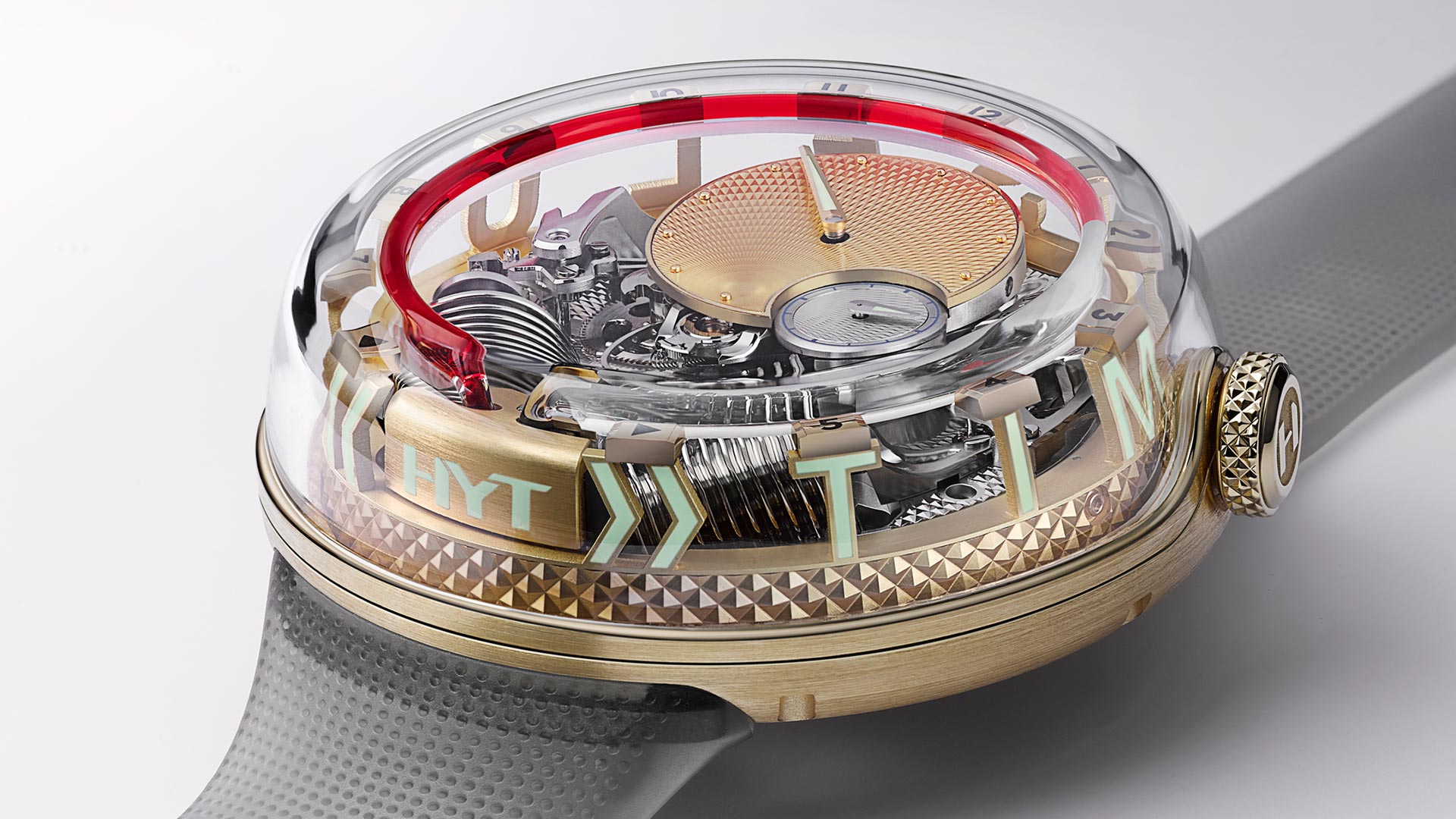 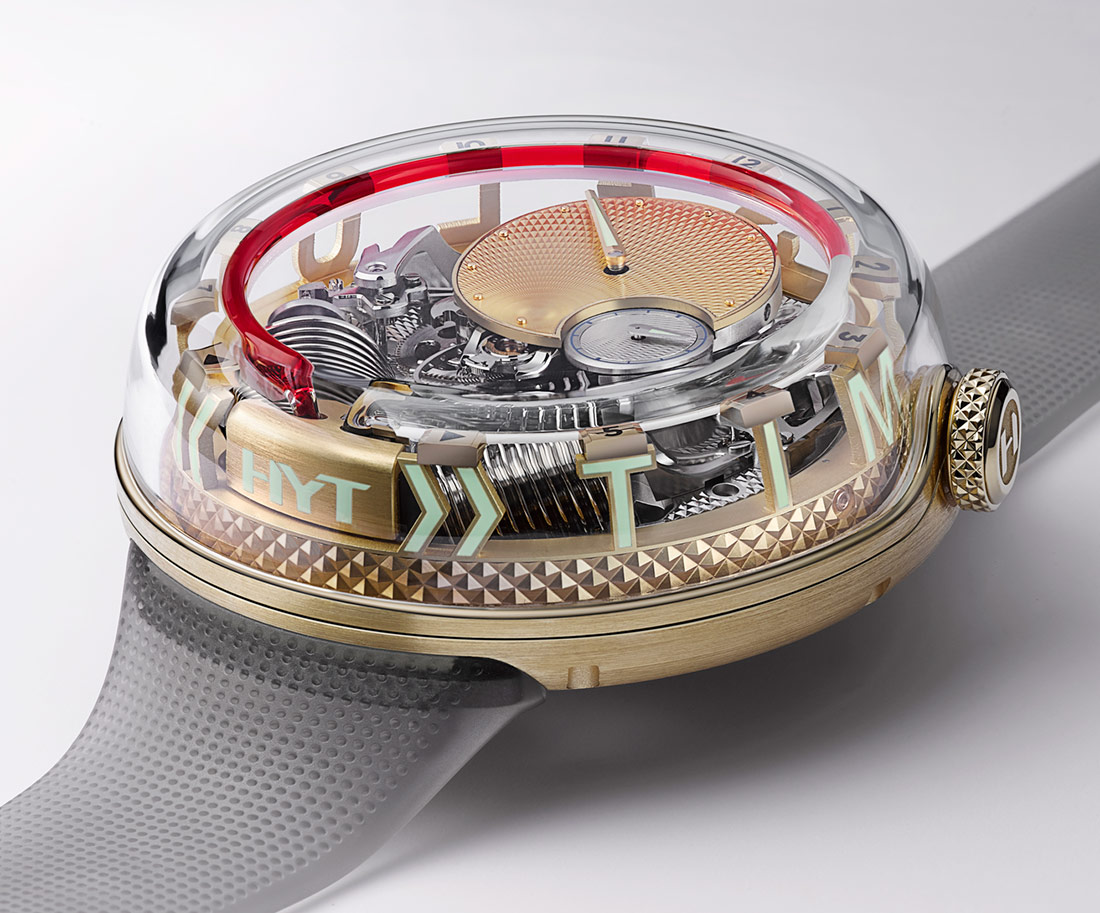 For the quickly approaching watch industry trade show SIHH 2019, HYT has announced an addition to its H20 collection. The HYT H20 “Time Is Fluid” watch is a captivating mix of futuristic design, traditional haute horology finishing on full display, and three-dimensional elements that add up to quite an eye-full. This new H20 family member is consistent in many ways with the line, as well as past HYT watches, but it introduces some key design differences – rather than just new color versions of existing H20 models. One element that is sure to polarize spectators is the “TIME IS FLUID” text rendered in individual, three-dimensional letters vertically lining the tall crystal’s edge. 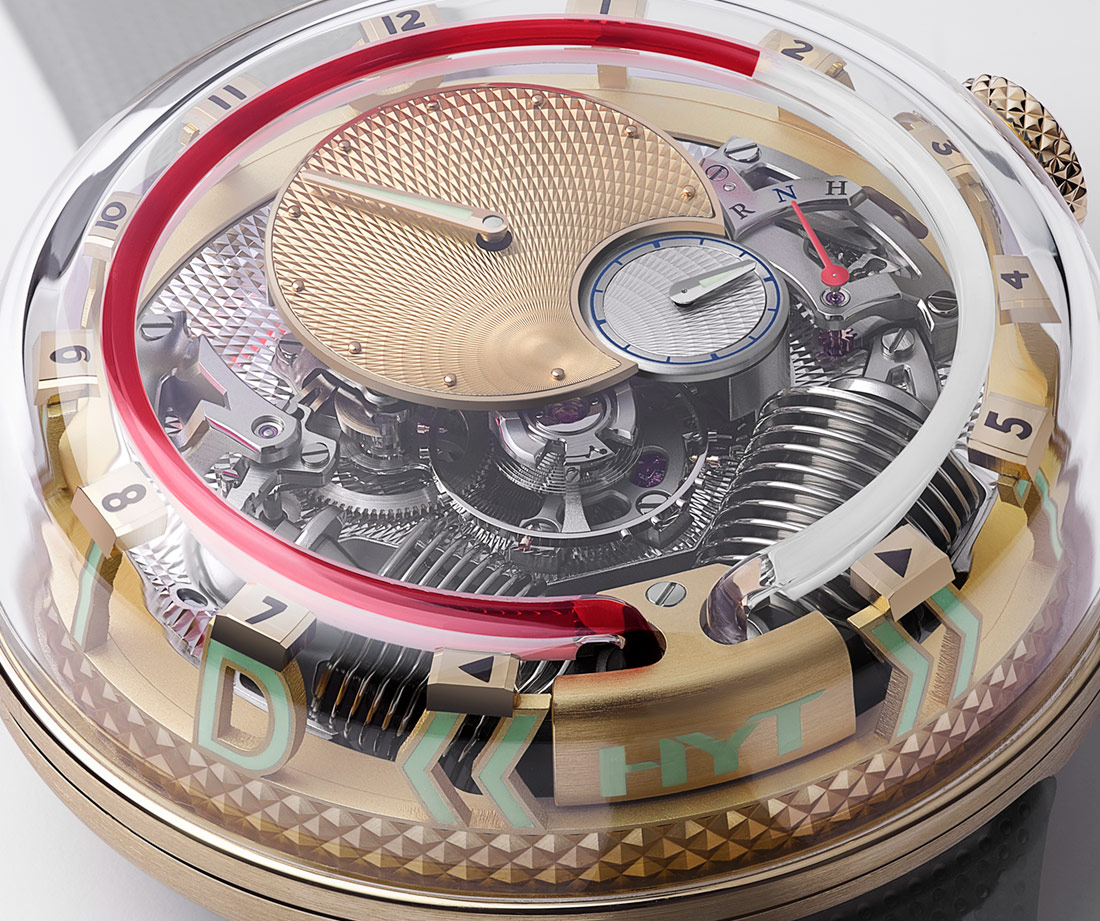 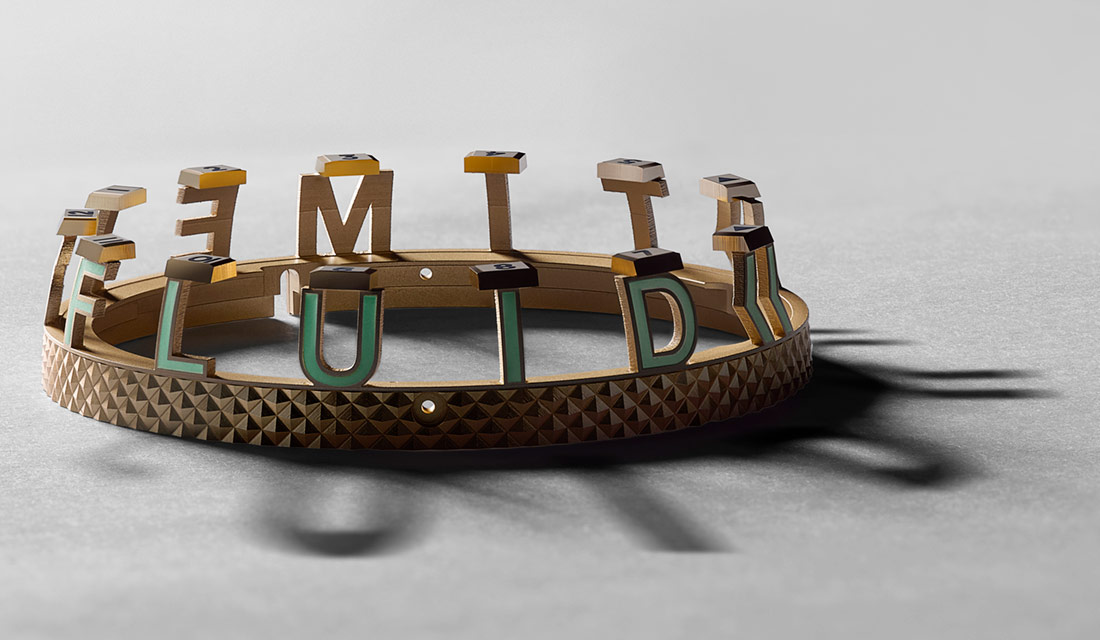 HYT watches share a lot of traits across their various models and lines. Most obvious and well-known, of course, is the use of colored fluid in tubes to indicate the hours – and the brand’s own self-description as “hydromechanical horologists” must be one of the most successful marketing slogans in recent independent watchmaking, partly because people just love to say it. HYT watches may generally include abstract concepts and avant-garde design, alternative time displays, and “boldly sized” cases. They also share specific design elements and movements, and the HYT H20 “Time Is Fluid” combines several features found in different HTY collections. 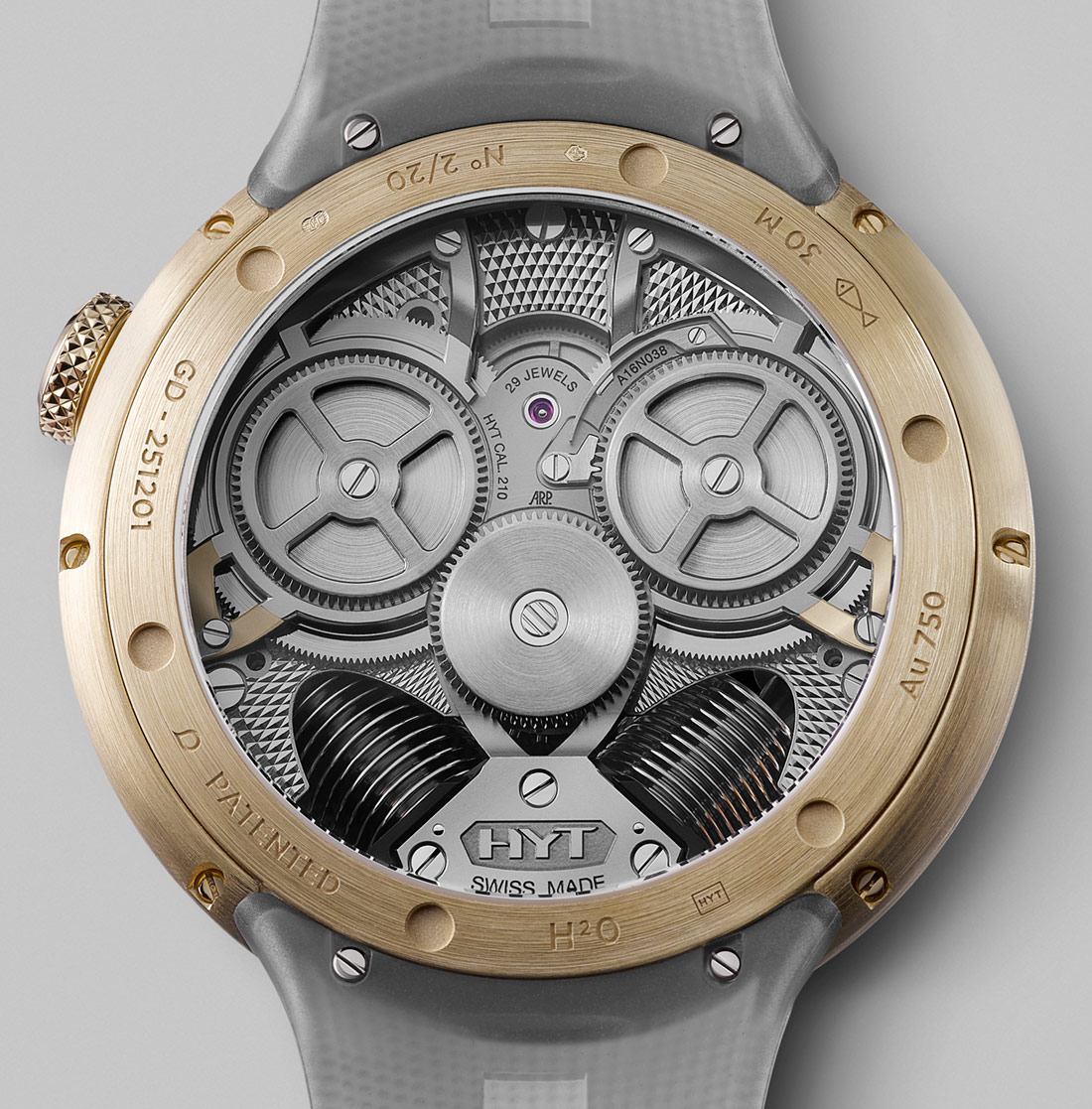 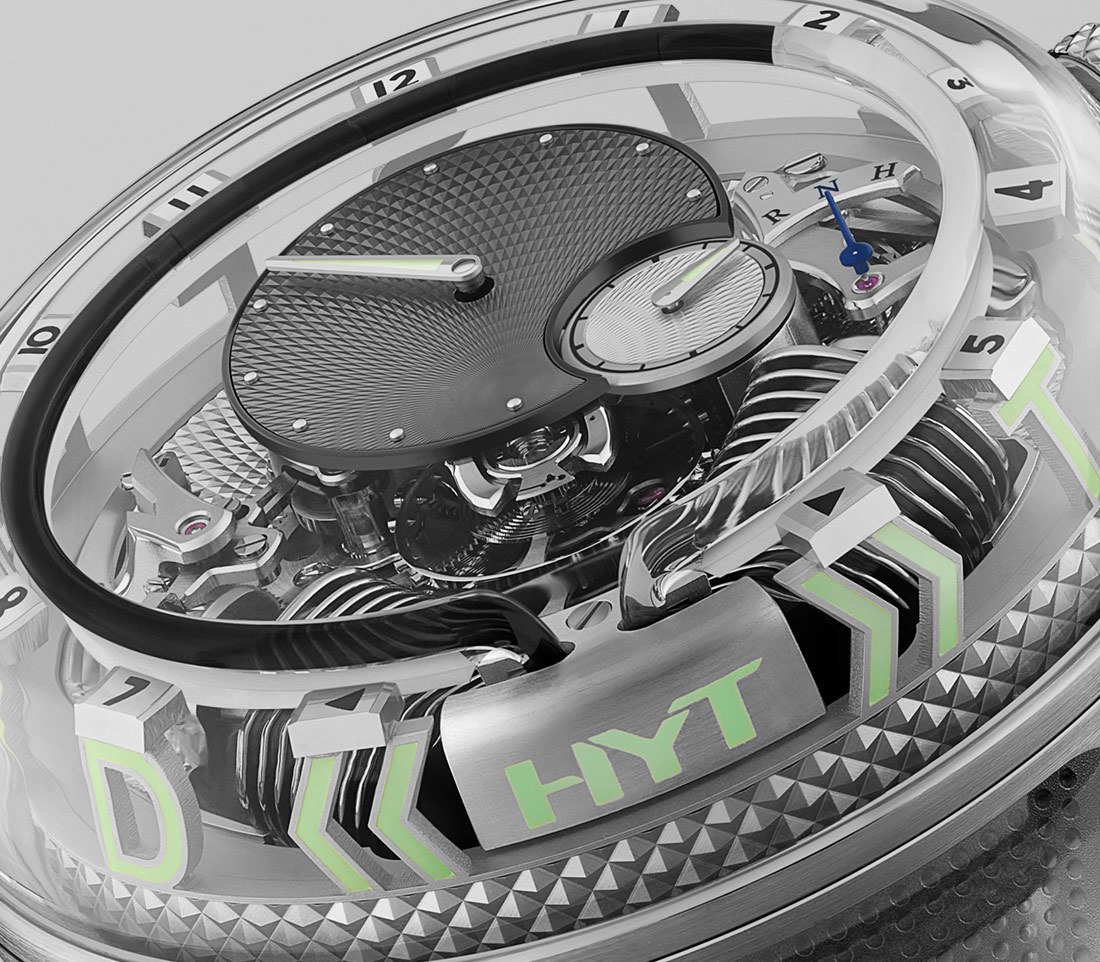 It always seems like the HYT team has a fun approach, and that comes through sometimes in things like the puns of “H20″ as well as the “Time is Fluid” references to the brand concept of using liquid time displays. A little more subtle in the H20 name, at least the way I see it, is that it combines elements from both the H2 and H0 collections. The HYT H0 (to be clear, that is aitch-zero) introduced the tall, bowl-like crystal that almost seems as if it’s part of the case and creates a lot of viewing depth and angles, as also seen here on the H20. See more about the HYT H0 watch in our review here. For some reason, I really like domed crystals and am particularly drawn to tall, extremely shaped ones – which I suppose is why I find myself interested by watches such as the Corum Bubble 47 Squelette and the affordable Fiyta 3D Time Skeleton we saw hands-on here. 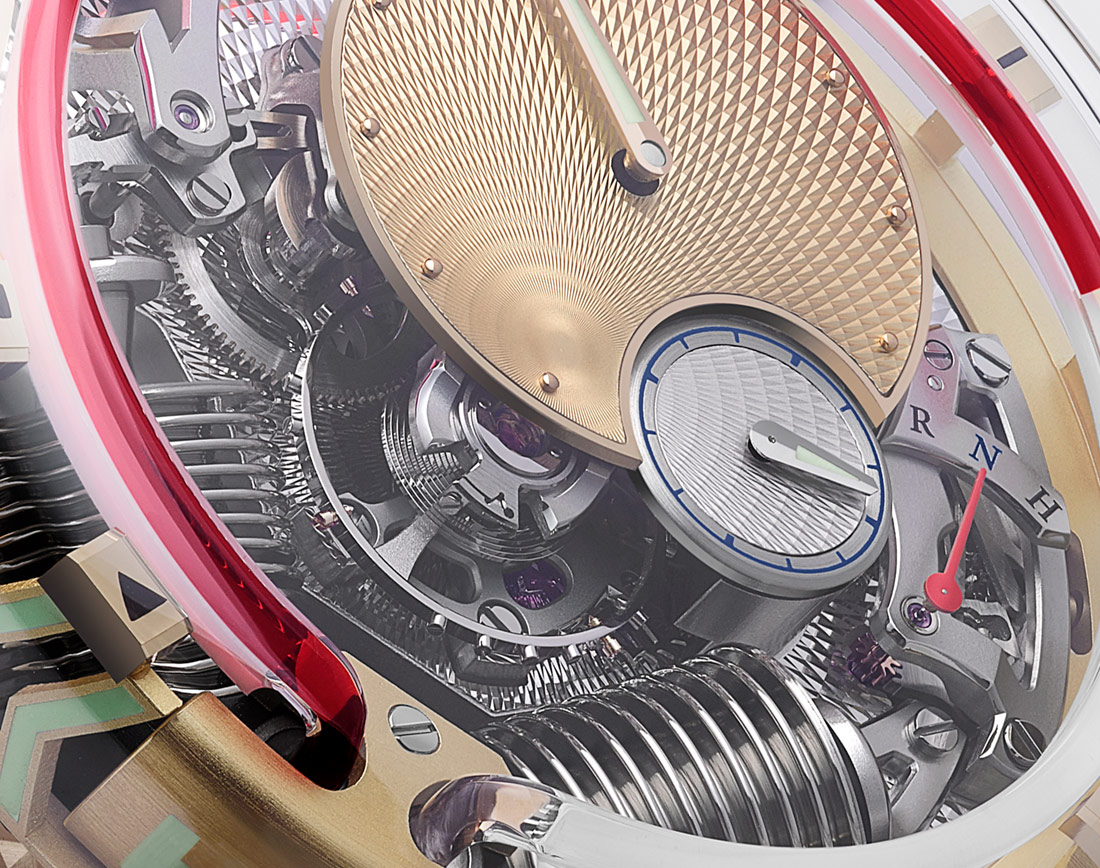 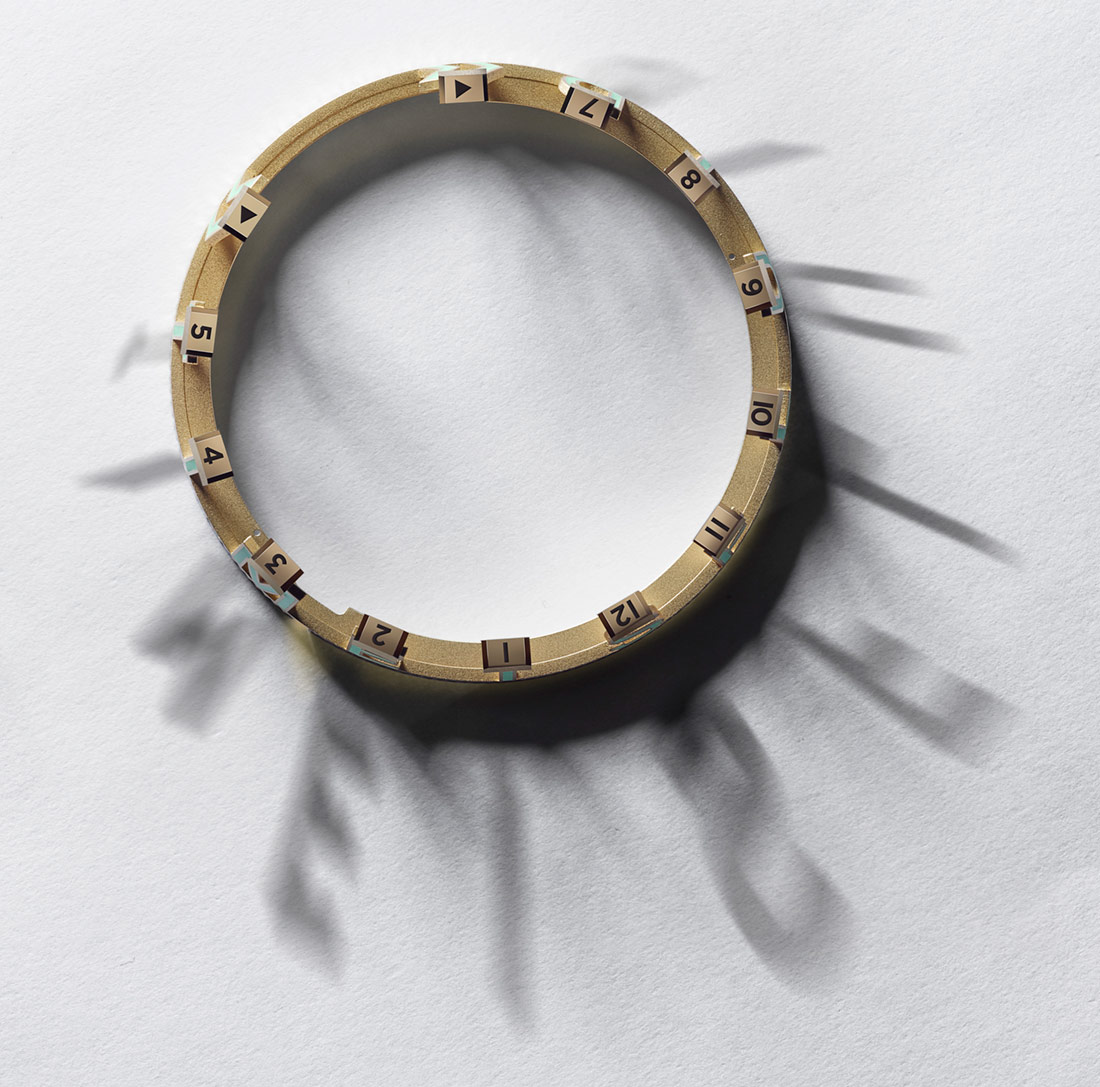 The HYT H20 uses a beautiful-looking movement exclusively produced for the brand by APRP, who we visited here. The HYT H20 “Time Is Fluid” watch uses a similar (unnamed) movement to that found in H20 watches, but this version actually appears closer to that used in the HYT H2 Tradition from 2016, including the machined “diamond guilloche” pattern on the mainplate. For the HYT H20 “Time Is Fluid,” that pattern is found also on the minutes and seconds subdials and echoed elsewhere, such as on the crown. It is worth noting that while the minutes and seconds hands do have C7 Super-LumiNova, the “skeleton ring” (meaning the 3D “TIME IS FLUID” letters) looks like it also does, but that is, in fact, green lacquer. In addition to the time is a crown position indicator (H-N-R for setting, neutral, and winding, respectively). 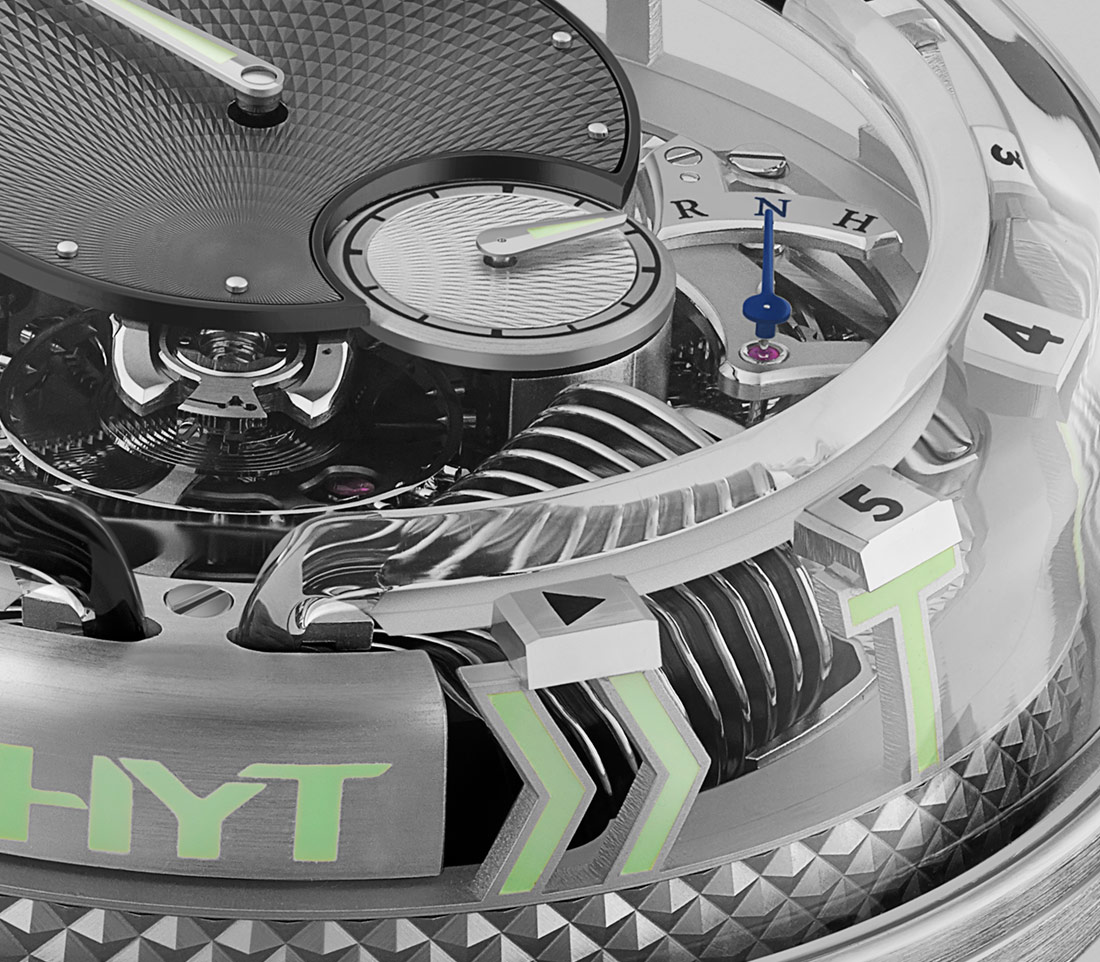 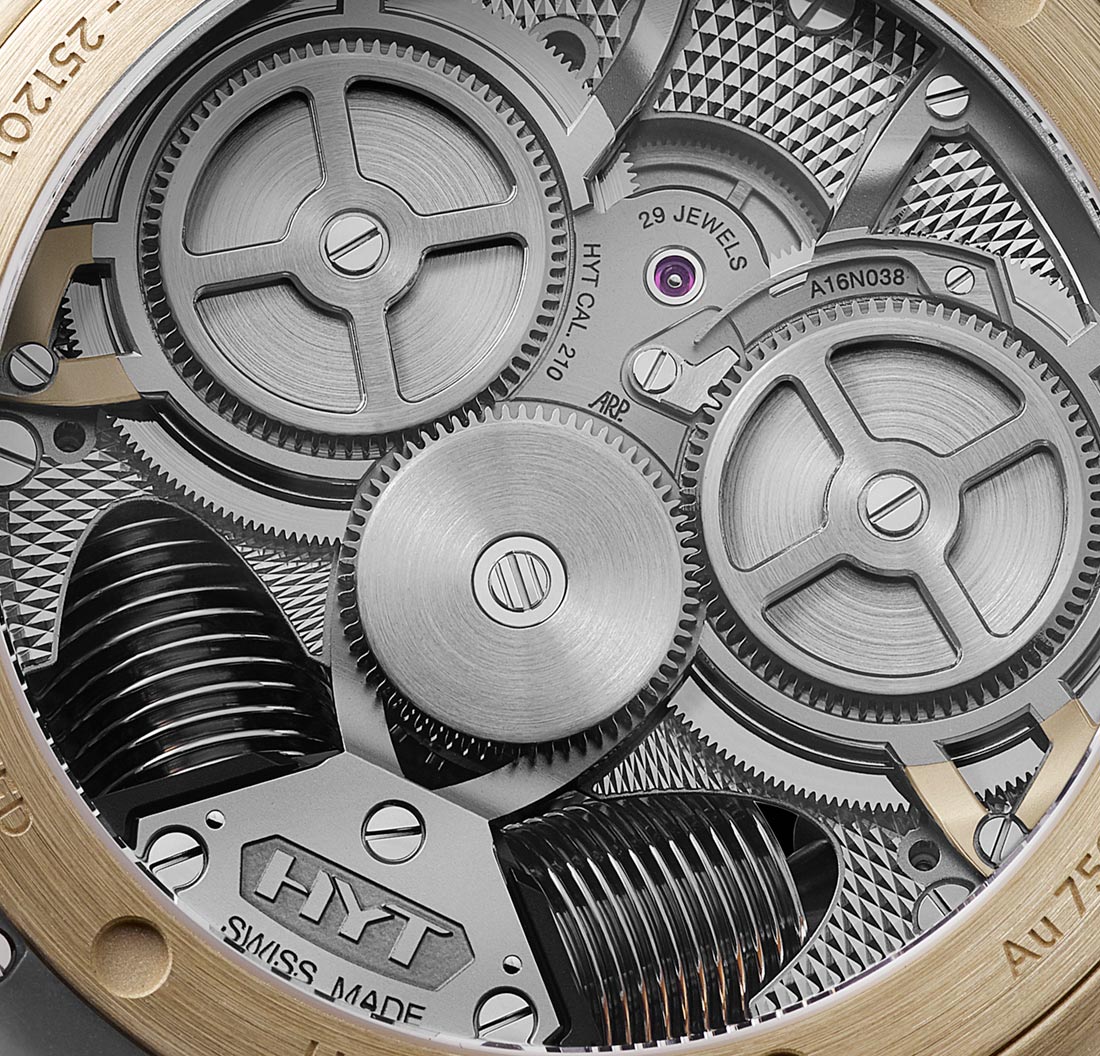 The manually wound APRP movement operates at 3Hz with a power reserve of eight days (192 hours). The liquid display is made possible by HYT’s own module. It uses bellows to push a colored liquid and a clear liquid through borosilicate glass, and the meniscus indicates the current hour – like all HYT watches. With the tall crystal, you can see a lot of the movement and from different angles, including the bellows that control the liquid time display. I like that, but have reservations about the “TIME IS FLUID” letters (which each have hour markers on top) for the same reason I don’t usually wear T-shirts with slogans or other writing. All in all, though, it’s not a terrible statement for a watch or an HYT in particular, and the wearer probably can’t read the entire phrase at once anyway, which might lead to growing tired of it. 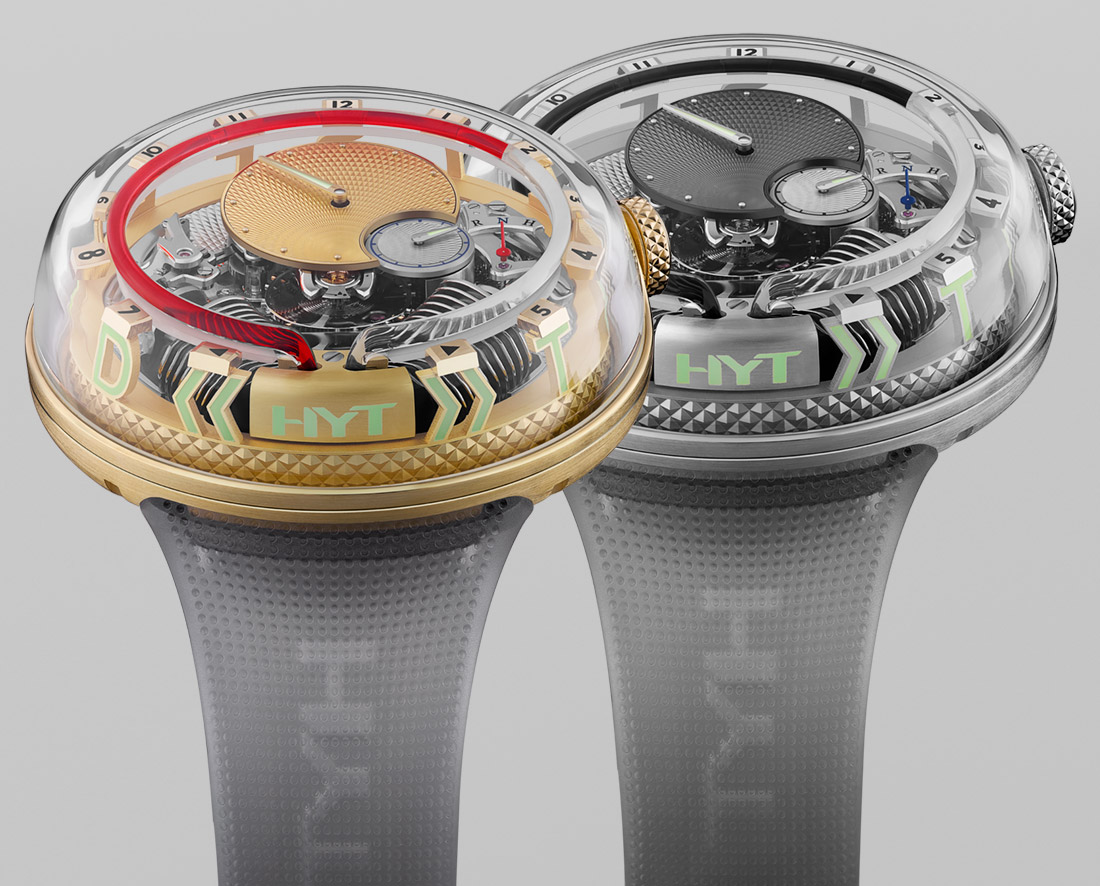 As usual, however, HYT is intentionally provocative and only needs to win over a handful of wealthy collectors, as the brand produces watches in very limited quantities. Like all watches from the brand, the HYT H20 “Time Is Fluid” will wear prominently, this one measuring 51mm wide and 20mm thick (30m water-resistant), but without protruding lugs, it can still be wearable for average wrists that can pull off the bold look. The strap is a translucent gray rubber for both versions. The HYT H20 “Time Is Fluid” watch comes in gold for a USD price of $125,000 or steel for a price of $115,000, and each is limited to 20 pieces. Learn more at hytwatches.com