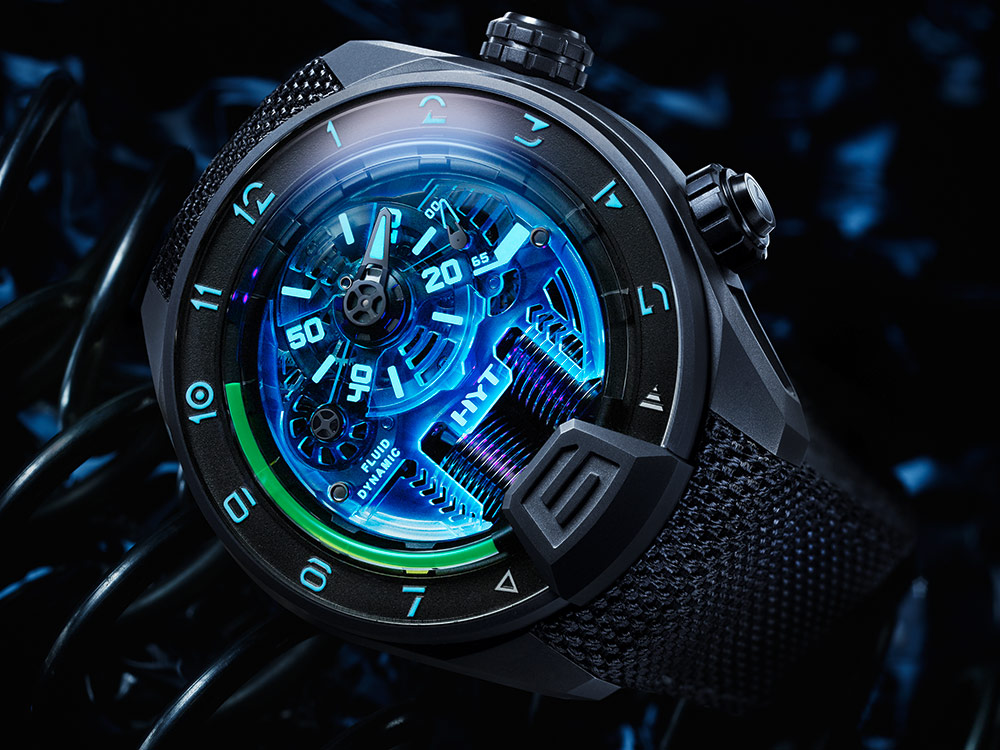 HYT is known for its liquid-and-bellows methods of telling the time, and with its recent HYT H0 release being more subtle – if you can call anything the brand produces “subtle” – the HYT H4 Neo comes out as the total opposite: almost the yang to the H0’s yin. Taking some similar cues from the previous H4 Metropolis with a lot more of that Matrix swag, the H4 Neo houses 2 purple LED lights behind the 6 o’clock position. 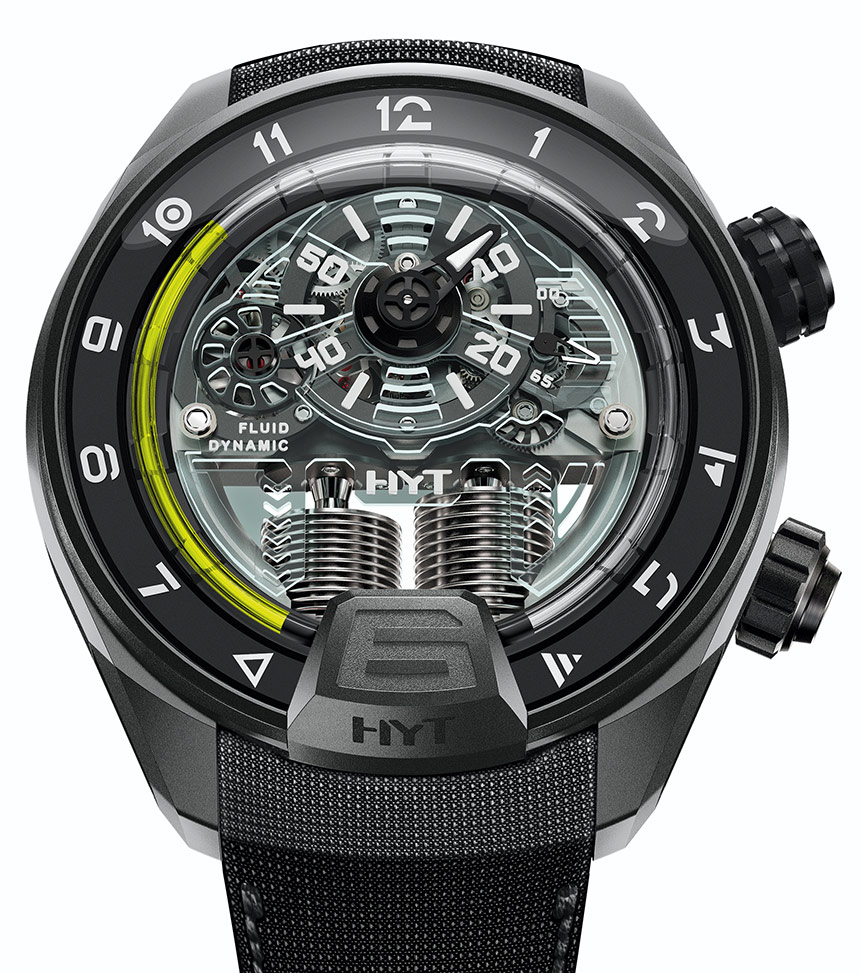 The HYT H4 Neo has two crowns. The crown at 2 o’clock is your standard crown for setting the time. The second crown at 4 o’clock is used to create energy. When the user winds the second crown, a second mainspring is wound, and that power is stored in a micro-generator. When the crown is pushed, that power is distributed to two purple LED lights that illuminate highly luminescent “nano-particles” throughout the transparent dial. While the hour indicators on the bezel, as well as the minute indicators on the dial are already coated with a white Super-LumiNova material, and the fluid hour indicator is luminescent in nature, when the light is activated every nuance and detail of the HYT exclusive caliber are illuminated and accentuated without hindering legibility. In fact, it enhances it. 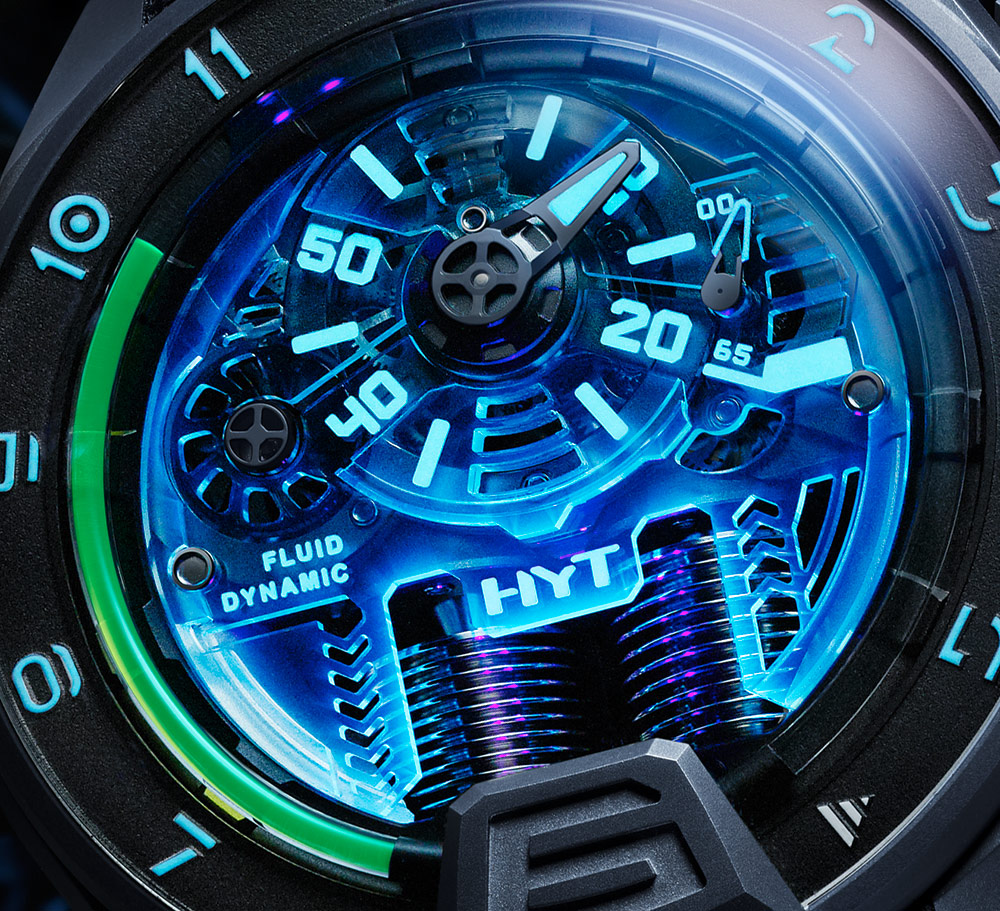 Mechanically generating power outside of the mainspring isn’t a new concept. It’s interesting to note that minute repeaters often utilize very similar mechanics to power the mechanism that allows the wearer to determine the time in the dark. Is it fair to compare this to a minute repeater? Probably not. But the endgame is the same. Telling the time in the dark is that much easier, and doesn’t require a battery. 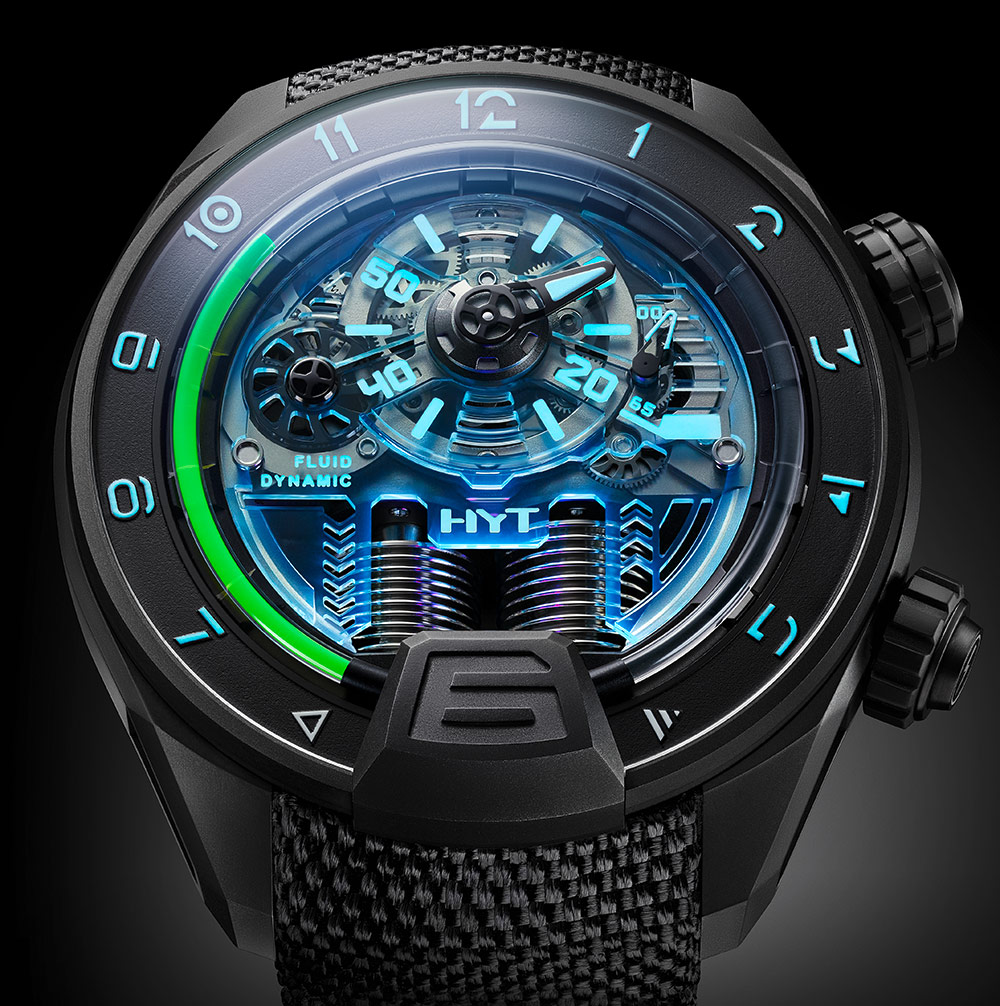 Measuring in at a whopping 51mm width by 18mm height, this watch is massive. Unlike HYT’s latest H0 collection, the 6 o’clock protrusion is back, along with a bezel bringing back the quintessential DNA that’s typical throughout the HYT collections. It’s hard not to notice the similarities between this watch and 2015’s HYT H4 Metropolis (hands-on linked to above), as the two are virtually siblings with the H4 Neo bringing out even more futuristic vibes – particularly with the Matrix-esque hour numerals. Both watches seem to channel the original energy of the H1 from 2012. 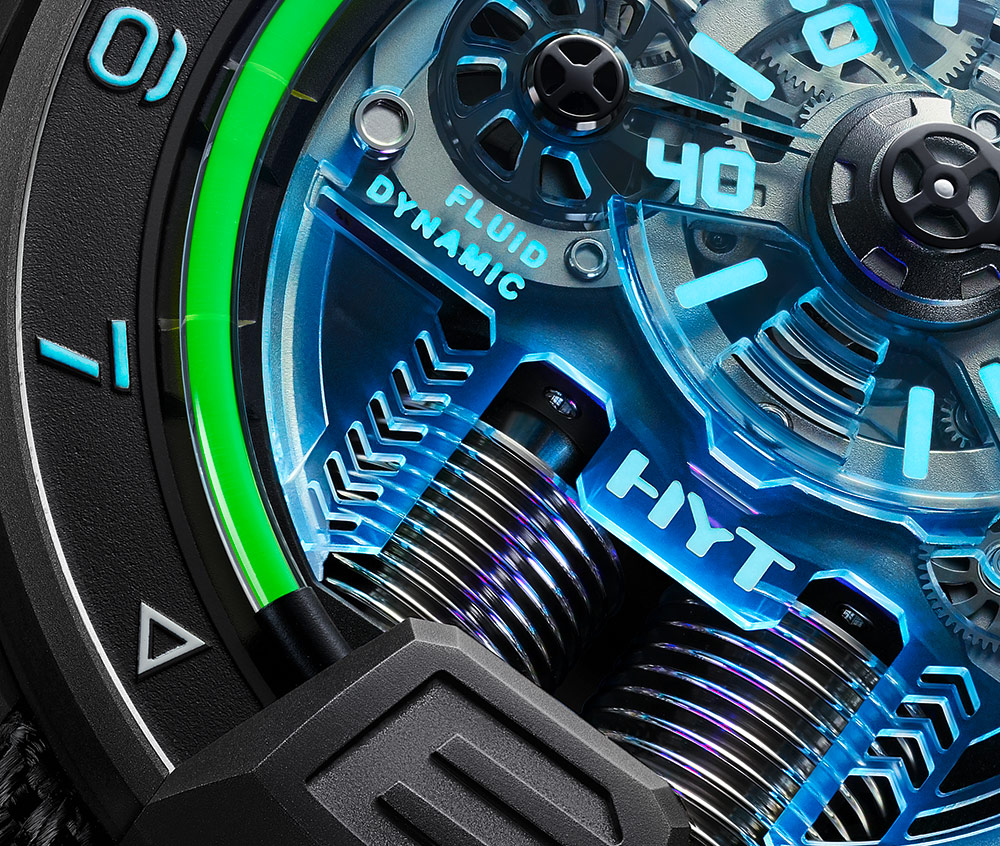 The charcoal grey, DLC-coated titanium case fits HYT’s standard black and green color theme, with the purple light giving an added dimension to the watch that isn’t always apparent in previous designs. The HYT exclusive caliber utilizes its standard micro-liquid technology. At a high level, the mechanical movement utilizes a bellow with a colored liquid, and a bellow with a clear liquid located at the bottom of the movement. As one compresses over time, one depresses, and the liquid moves slowly inside of the glass tube, thus displaying the time along the outer edge of the dial. Skeletonized for the H4 and visible through the transparent dial, the movement fits the overall theme of the watch.

The HYT H4 Neo is fitted with a fire-resistant, water-resistant, hypo-allergenic, and reinforced fabric strap. Featuring a curved sapphire crystal and screw-down sapphire case-back (pictures will be posted when we get them), the watch is water resistant up to 50m. Even with the second charging spring, the watch features a generous 65-hour power reserve. 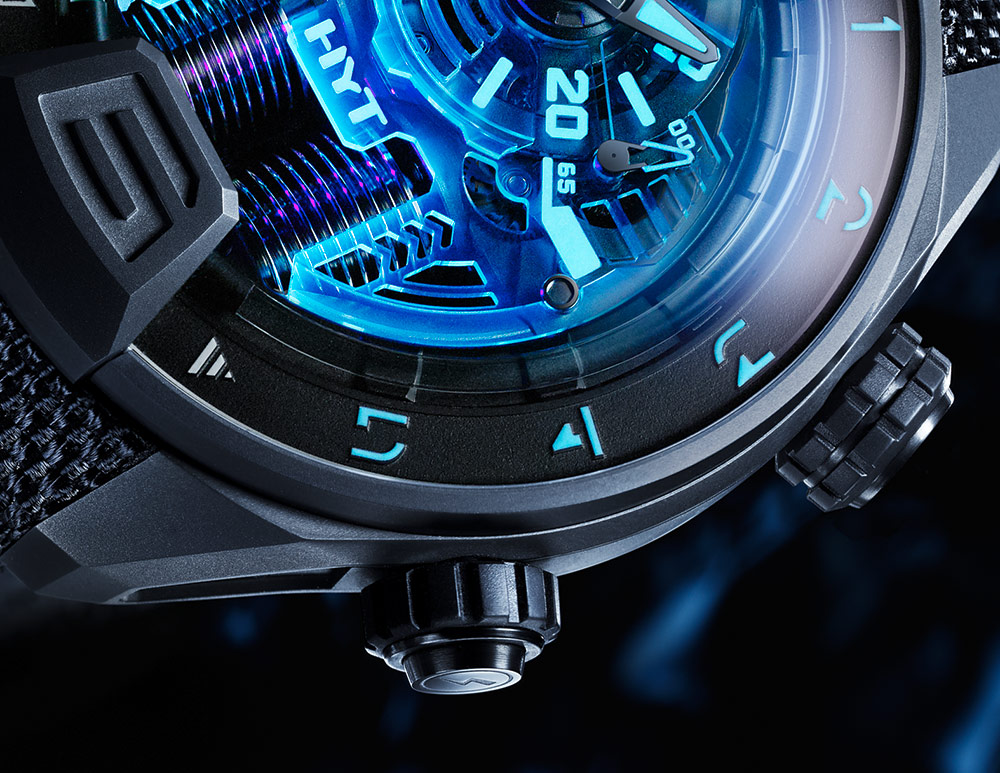 There’s no doubt that the HYT H4 Neo was created to be seen. There isn’t a subtle component in it, but that’s what people love about HYT. I can definitely say that, for me and my pencil wrists, this watch would likely not be feasible without a significant amount of consecutive Thanksgiving dinners. However, I have to admit that I think it’s incredibly fun. There’s no doubt this is for a niche buyer, and HYT absolutely owns that – which makes it really difficult to criticize the brand and the pieces they produce. They know their market, and design their timepieces accordingly. The HYT H4 Neo certainly isn’t going to be for everyone, but I bet the guys who scoop these up would be fun to hang out with.