HYT is well known for pushing boundaries. The Neuchâtel-based brand’s goals have always been clear: to shake up the status quo from every conceivable angle. For a brand founded fewer than 10 years ago (2012), HYT has experienced a sharp maturation. While the earlier products put out by the brand were far more digestible (and, in comparison to the current range, look positively traditional), the true craziness of the brand’s character has only recently emerged. The HYT SOONOW watch is perhaps the closest representation of the brand’s core aims we’ve seen so far.

Doing things by halves is not something anyone would ever have associated with the company that brought us horology’s first fluidic module small enough to fit on the wrist. But when HYT went to blow the lid off the industry’s expectations, it seems they found several subsequent lids that would also need blowing off in time. And here we are. With the (explosive) release of a new limited-edition model, HYT has not only embraced its role as the industry’s maddest of mad scientists, it has also flexed its muscles as one of watchmaking’s foremost philosophical artists. 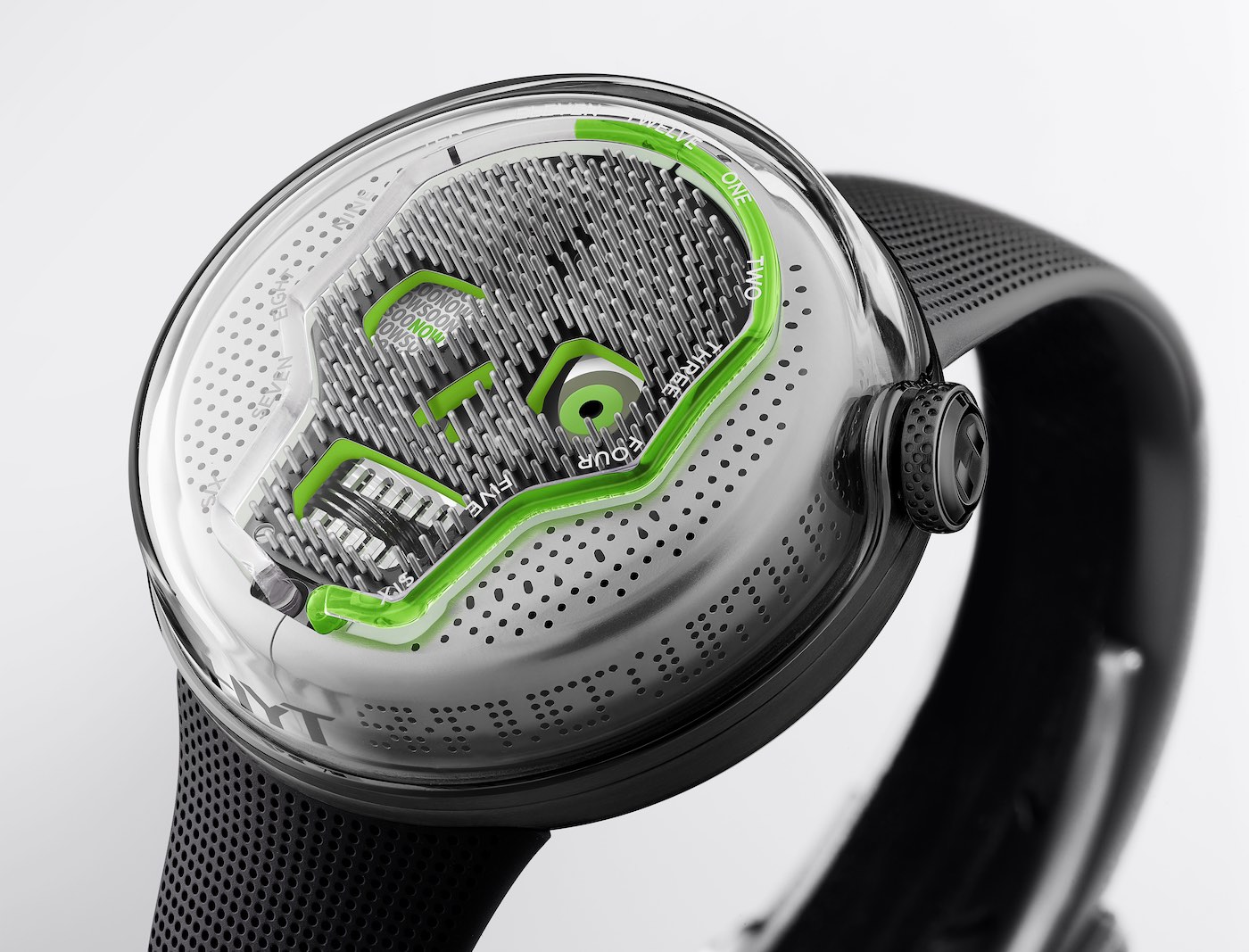 Inspired by ancient Aztec carvings, the skulls used in HYT’s watches are a central motif. Skulls and watchmaking go together like peanut butter and jelly. The folly of man in the face of time. As far as temporal symbolism goes, it’s low hanging fruit. But low hanging as it may be, it does seem to be very juicy fruit (because skulls, whether we think they are cool or not, still sell).

The previous HYT Skull watches have been based around the same core form. Some models experimented with unusual materials, some with engraving, some with both. But the HYT SOONOW uses a different form entirely. This more basic skull must have provided a significant technical challenge, as the glass capillary containing the liquid that indicates the passing hours has much sharper (and a couple more) bends in it than the previous iteration.

One of the biggest challenges faced by HYT when designing the original Skull watch was ensuring that the movement and the bellows were able to compensate for the increased force needed to push the fluid around a bend in the glass. It stands to reason that the sharper the bend, the greater the pressure differential will be. 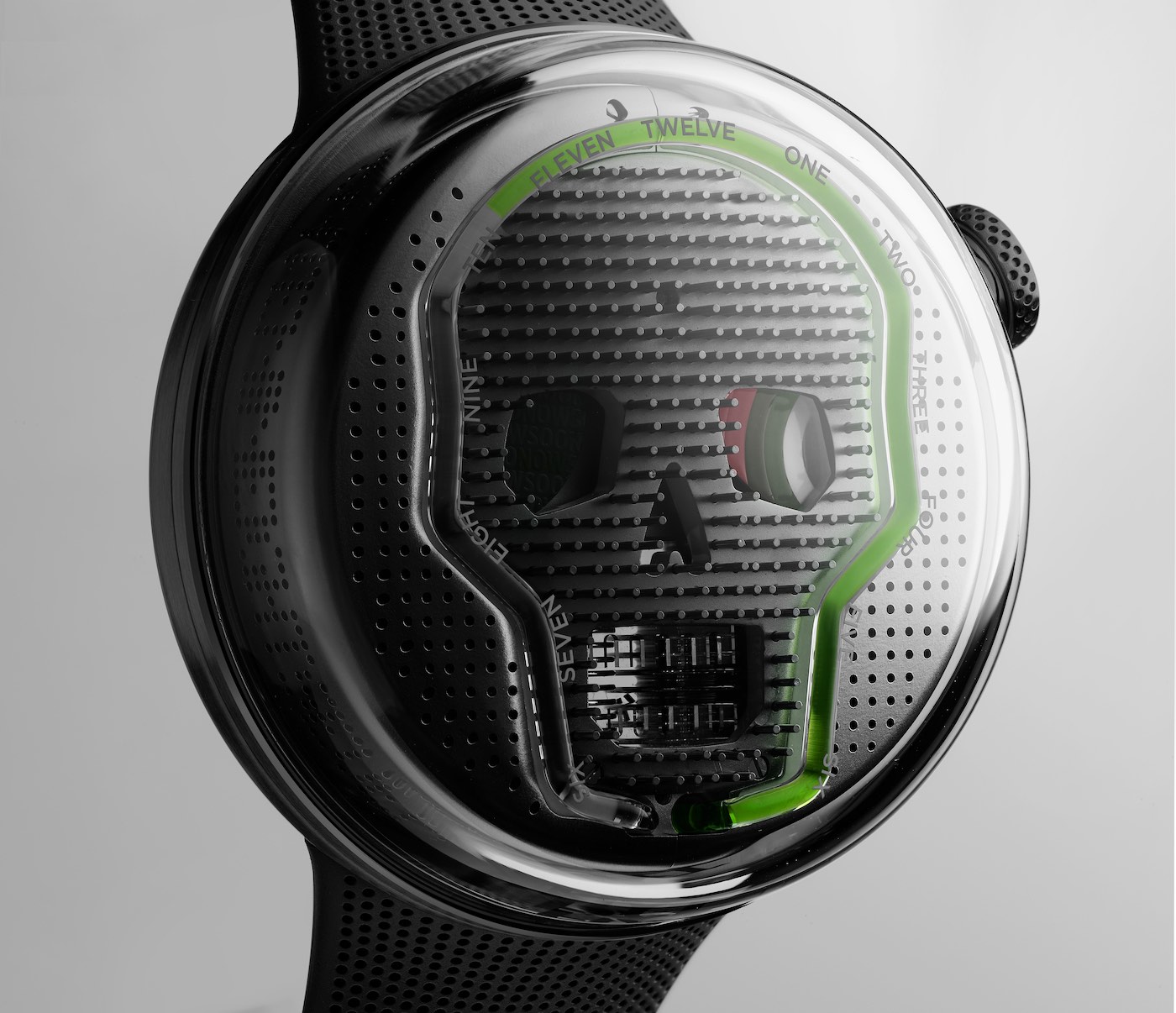 The movement powering this intriguing piece is an exclusive manual-winding caliber with an operating frequency of 28,800vph and a power reserve of 65 hours. The bridges are hand-beveled and decorated with Côtes de Genève.

The patented micro-fluidic module features a borosilicate glass capillary tube with nano-coating interior, bent into the shape of a skull. Inside the capillary, two immiscible liquids; one transparent, one colored, are separated by a thin meniscus that marks the hour. The liquid is stored in two multi-layer metal bellows linked to a thermal compensator. As one bellow contracts, squeezing its liquid through the capillary, the other contracts, allowing its fluid to flow back into it. When the hour indicator reaches the end of the capillary (so one bellow is totally depressed while the other is totally full), a retrograde function kicks in and the colored fluid returns to the right-hand bellow to begin its 12-hour journey again. 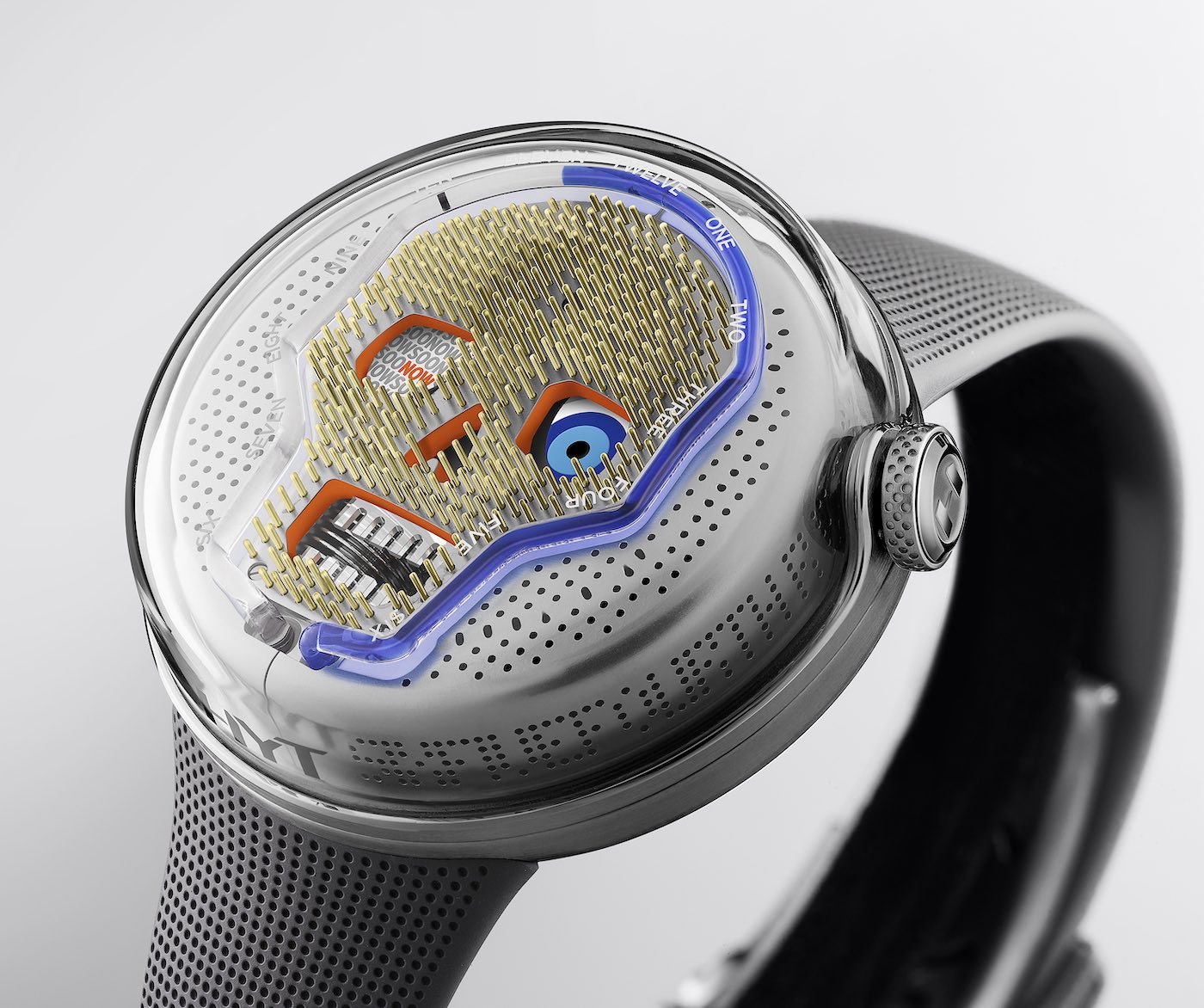 The HYT SOONOW watch comes in two colors (both limited to 25 pieces). One model has green fluid (backed by a black Super-LumiNova rail running beneath the capillary), and the other has blue fluid (backed by a white Super-LumiNova rail). The titanium dial is decorated with 313 18k-gold pins (either yellow or white) and 937 perforations. The skull, crown, and stainless steel base plate on the green version are all DLC-coated.

Both dials display the hour by way of the fluid-filled glass capillary. Neither model features a minute hand, as is the norm for the HYT Skull watches. The left eye of the skull shows a rotating message utilizing the words “soon,” “here,” and “now.” This is effectively a running indicator or a rudimentary seconds hand. In the left eye socket, a dilating pupil indicates the power reserve (and plays its part in creating this manic visage). 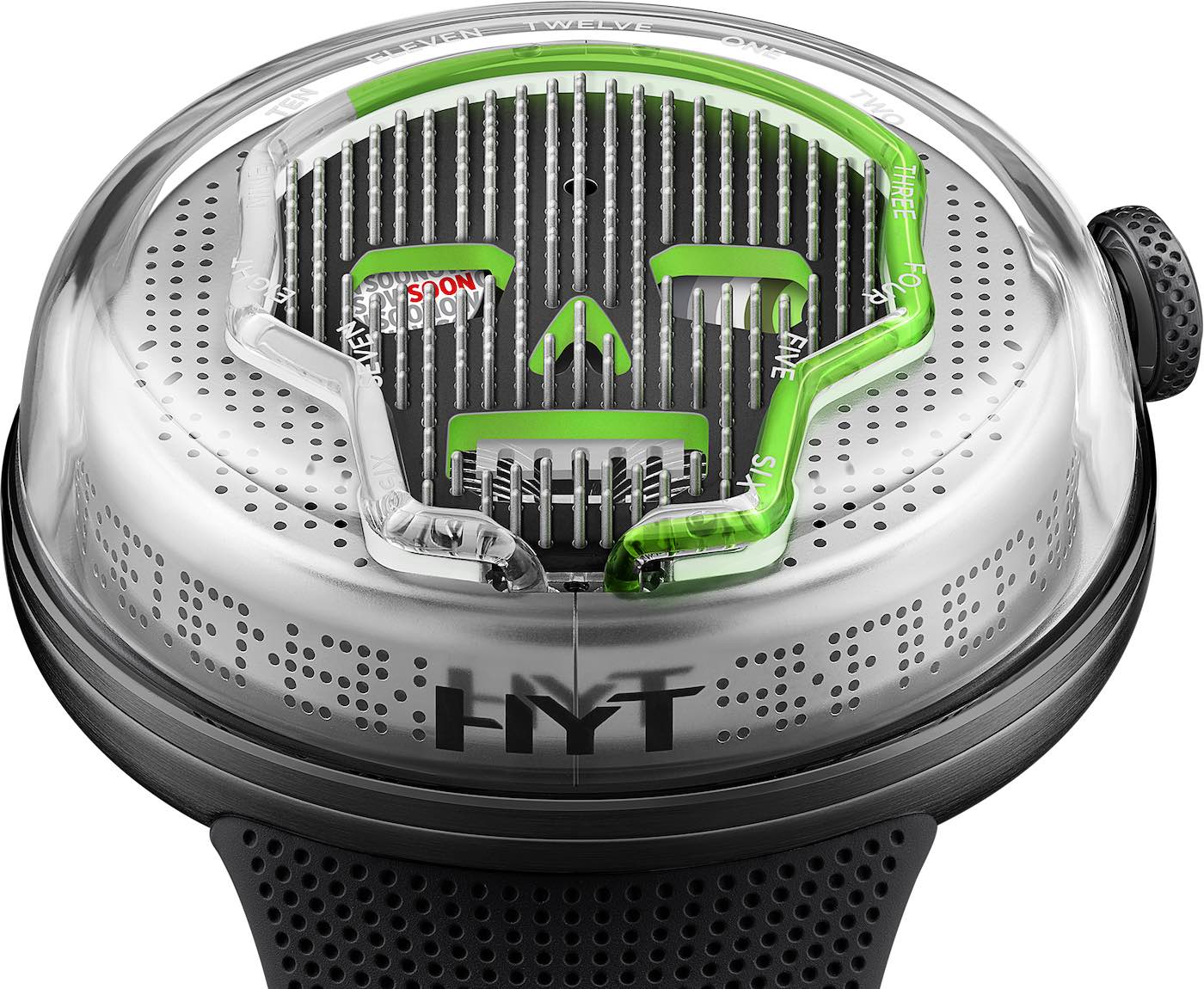 The HYT SOONOW watch measures 48.8mm-wide and stands up 20.08mm on the wrist. It is a large, unapologetically divisive wrist sculpture. The messages it is trying to communicate are well understood but perhaps too often forgotten. I am a huge fan of the brand, in general, and am quite fond of their earlier skull-inspired models, but this one does not resonate with me quite so much. The ubiquitous use of sapphire crystal affixed to a stainless steel base makes for an eye-catching piece, but I preferred the warmth and artistry of something like the HYT Skull Maori watch. However, given that both new references will be limited to just 25 pieces, it seems unlikely they will struggle to find homes on the wrists of the ultra-rich who want something that stands out from the crowd. The price for the HYT SOONOW will be CHF 75,000. Learn more about the hydromechanical horologists at hytwatches.com.