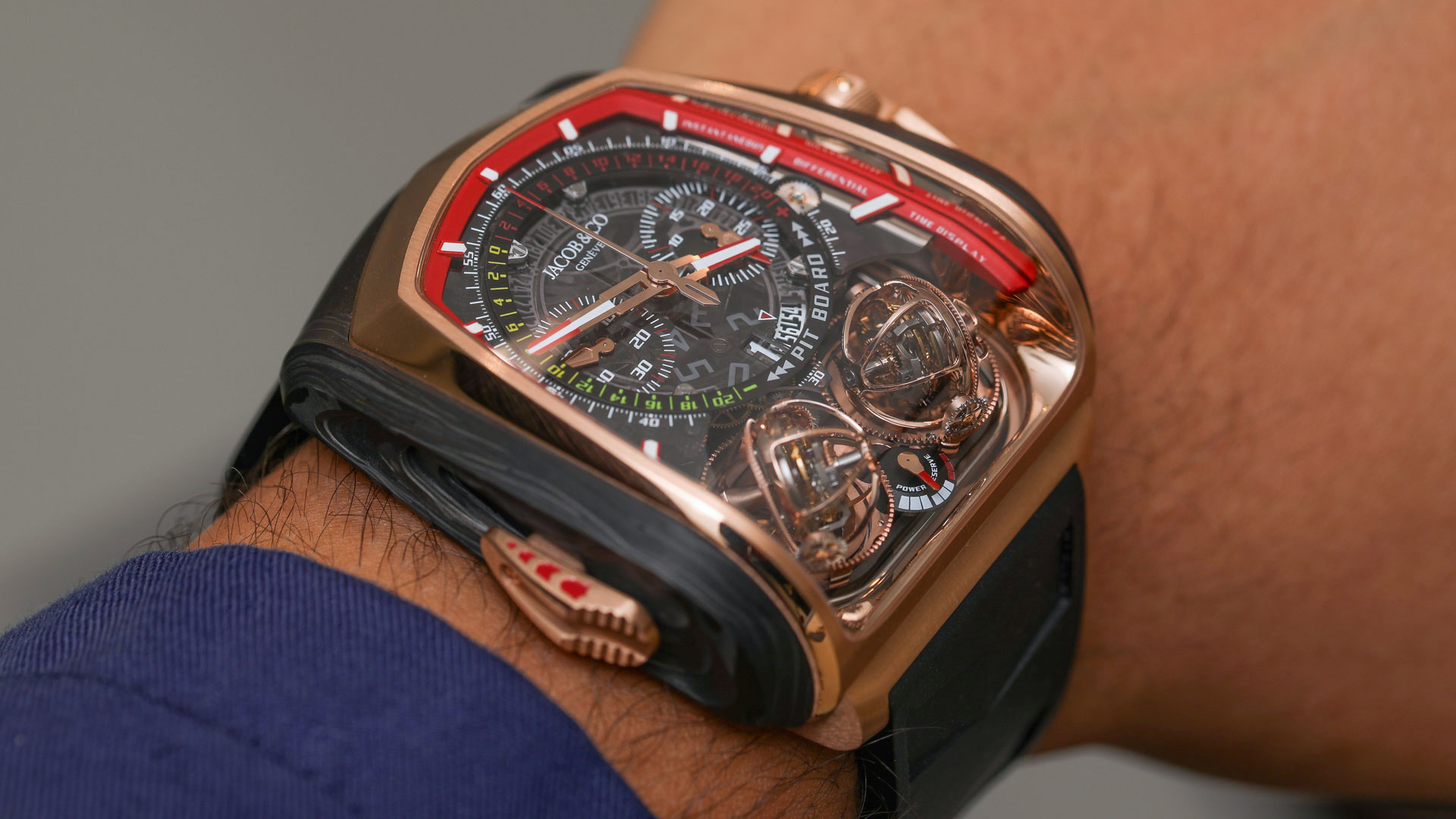 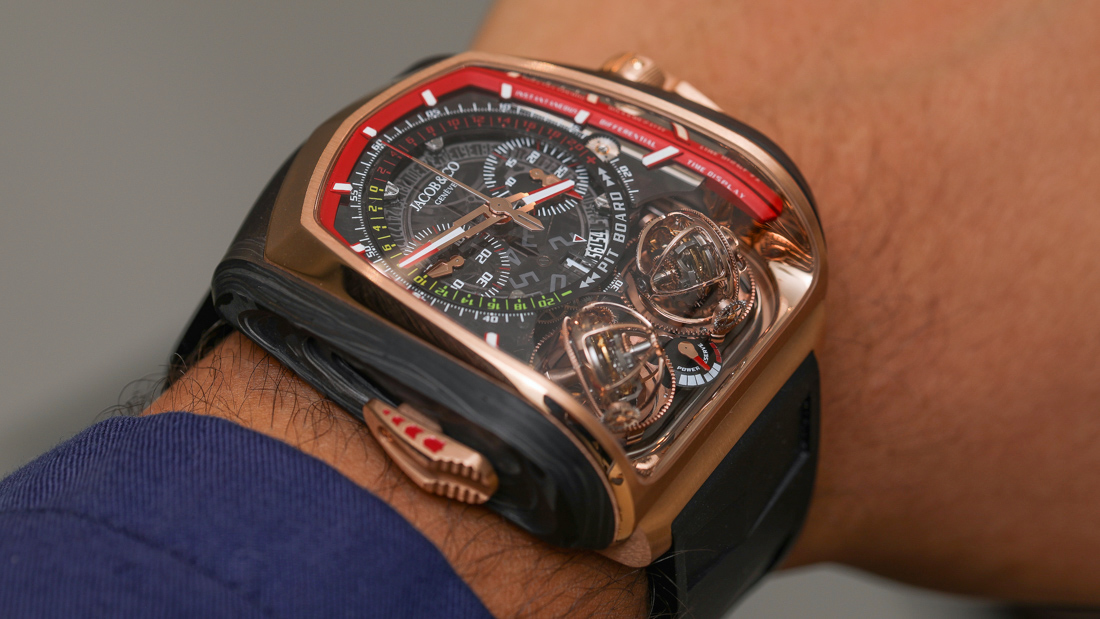 As far as statement timepieces go, few brands do a better job than Jacob & Co., which was founded in 1986 initially as a jewelry outfit and started making watches in 2002. There is nothing conventional about Jacob & Co.’s watches, as evidenced by pieces such as the Astronomia Solar and the Epic SF 24. This year, the brand unveiled what could be one of its most elaborate and outrageous watches yet, the Twin Turbo Furious. The name hints at the velocity at which its twin tourbillons rotate, but what it doesn’t tell you is that the twin tourbillons are actually triple-axis variants, and that it also contains a decimal repeater, monopusher chronograph, and an unusual complication called the reference time differential. Let’s take a closer look at the Twin Turbo Furious. 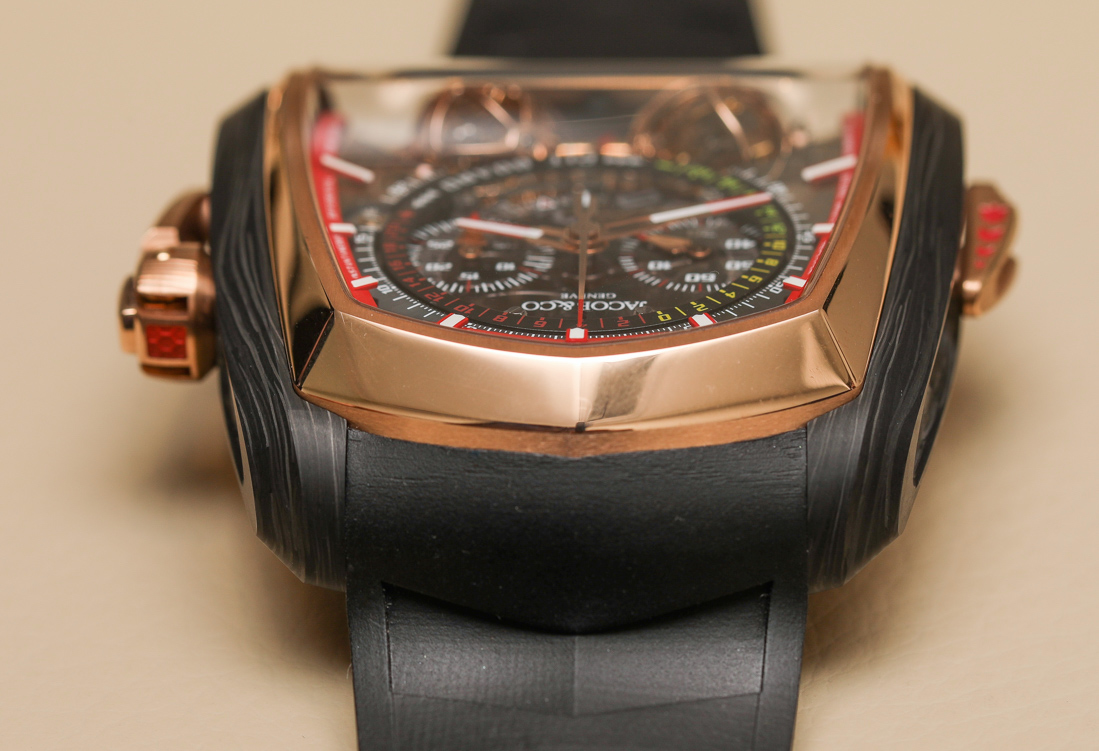 The Twin Turbo Furious is a follow up to the Twin Turbo Twin Triple Axis Tourbillon Minute Repeater (Yes, that’s the name. It doesn’t roll off the tongue, does it?) watch from 2016. Like the Twin Turbo, the Twin Turbo Furious comes in a modern rectangular case that measures a whopping 57mm wide, 52mm from lug to lug, and 17mm thick. The watch looks even larger than what the specifications suggest because much of it is actually a large, curved sapphire crystal. People will notice the watch, I guarantee it.

The expansive dial is a cacophony of colors, dials, and hands. The main dial itself is actually a piece of smoked sapphire crystal with the Jacob & Co. logo. Around the periphery is a red neoralithe ring with white Super-LumiNova hour indexes and the seconds. Working our way in, we have the Pit Board, which is part of the reference time differential. This complication is used in conjunction with the chronograph to quickly indicate how many seconds faster or slower the elapsed time was in comparison to the reference time. The reference time is set using the crown and can be set up to 5 minutes and 59 seconds, which is indicated by the aperture at 6 o’clock on the main timekeeping dial. In the image above, the reference time is set to 1 minute and 56 seconds. Once the chronograph is stopped, owners can quickly see how much slower or faster the elapsed time was by reading the chronograph seconds hand off Pit Board wheel. 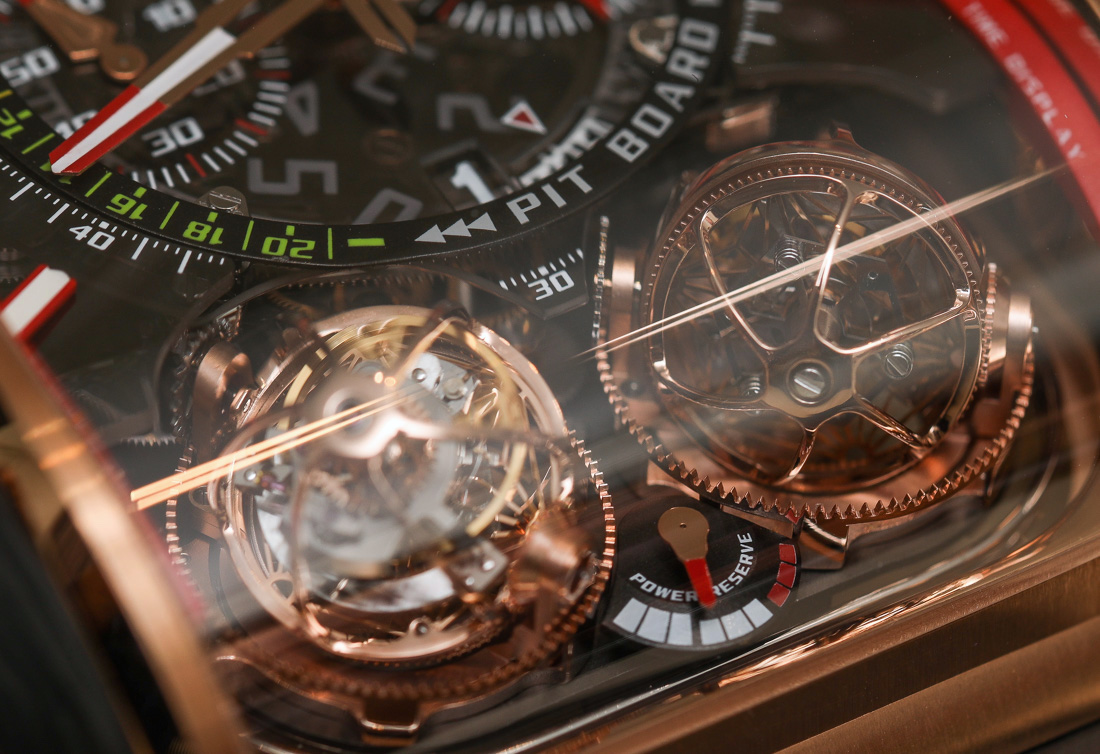 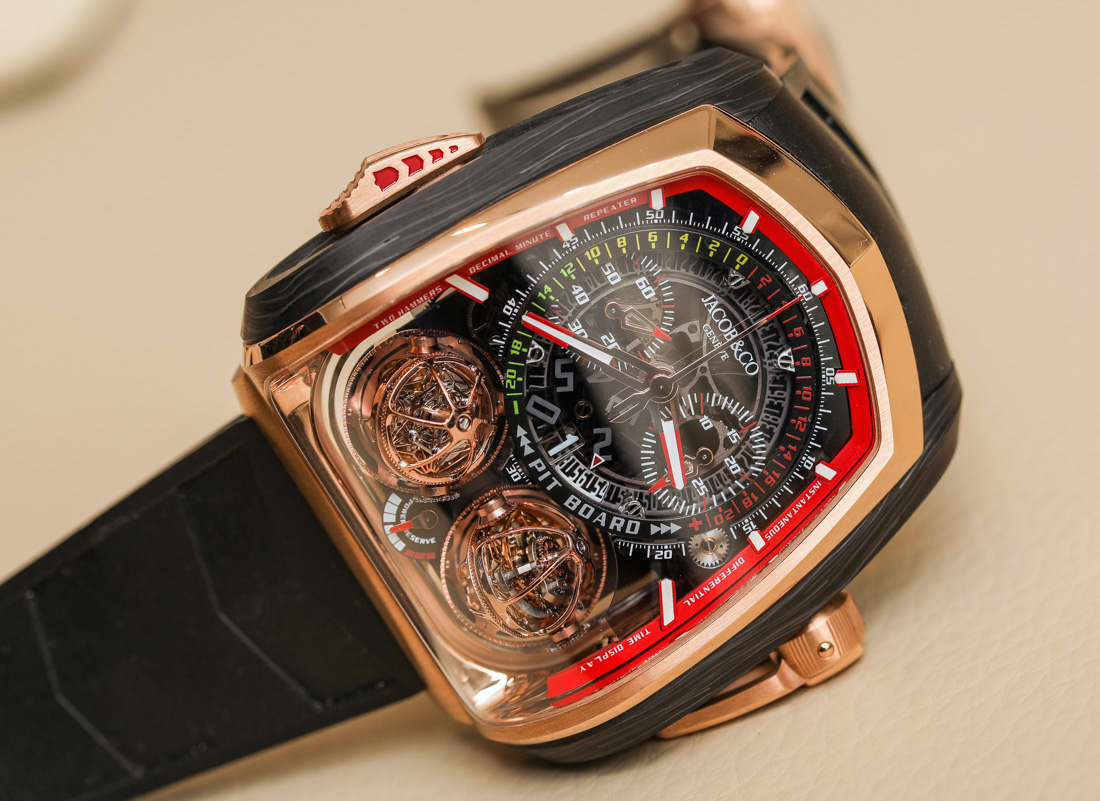 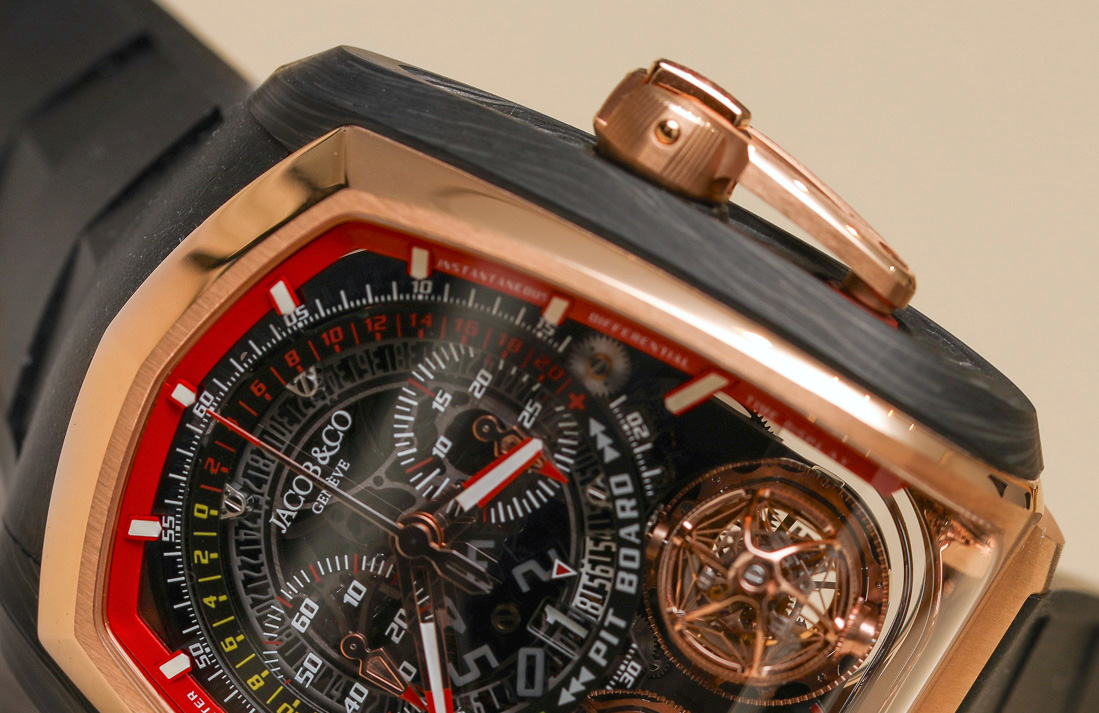 Contrary to what you might think, the dial is actually quite easy to read. Admittedly, it is quite cluttered but the large red hour and minute hands painted with red tips and white Super-LumiNova help greatly with legibility. The bigger issue is trying not to be mesmerized by those two fast-spinning tourbillons. 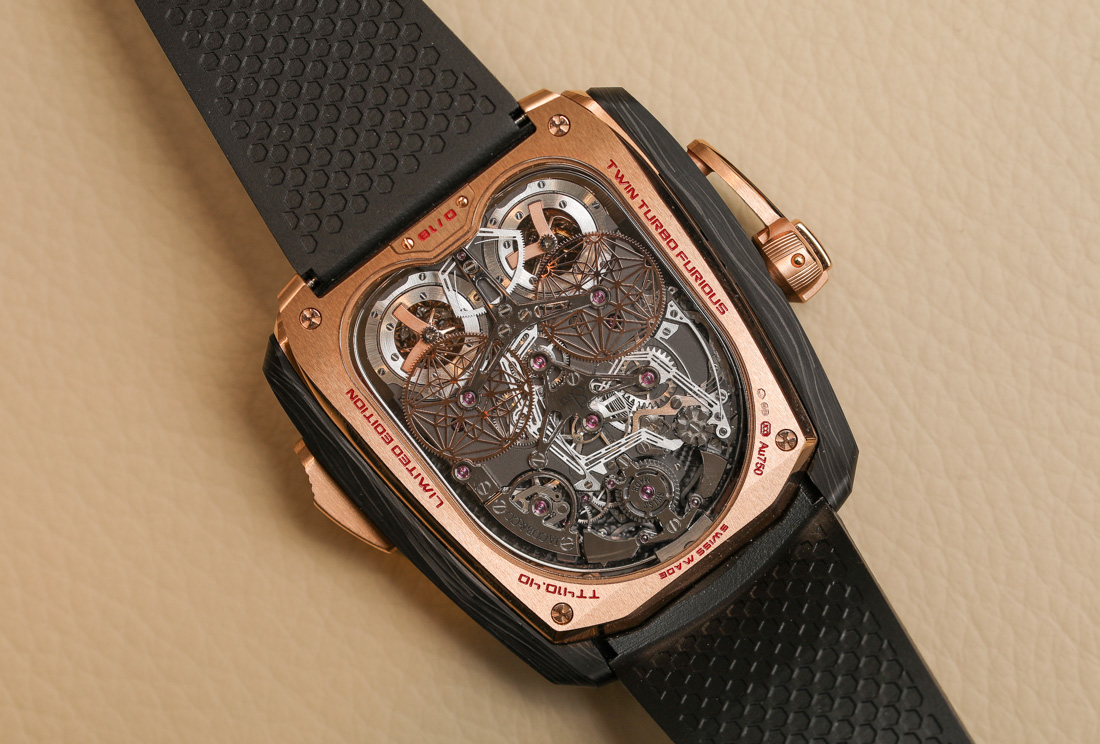 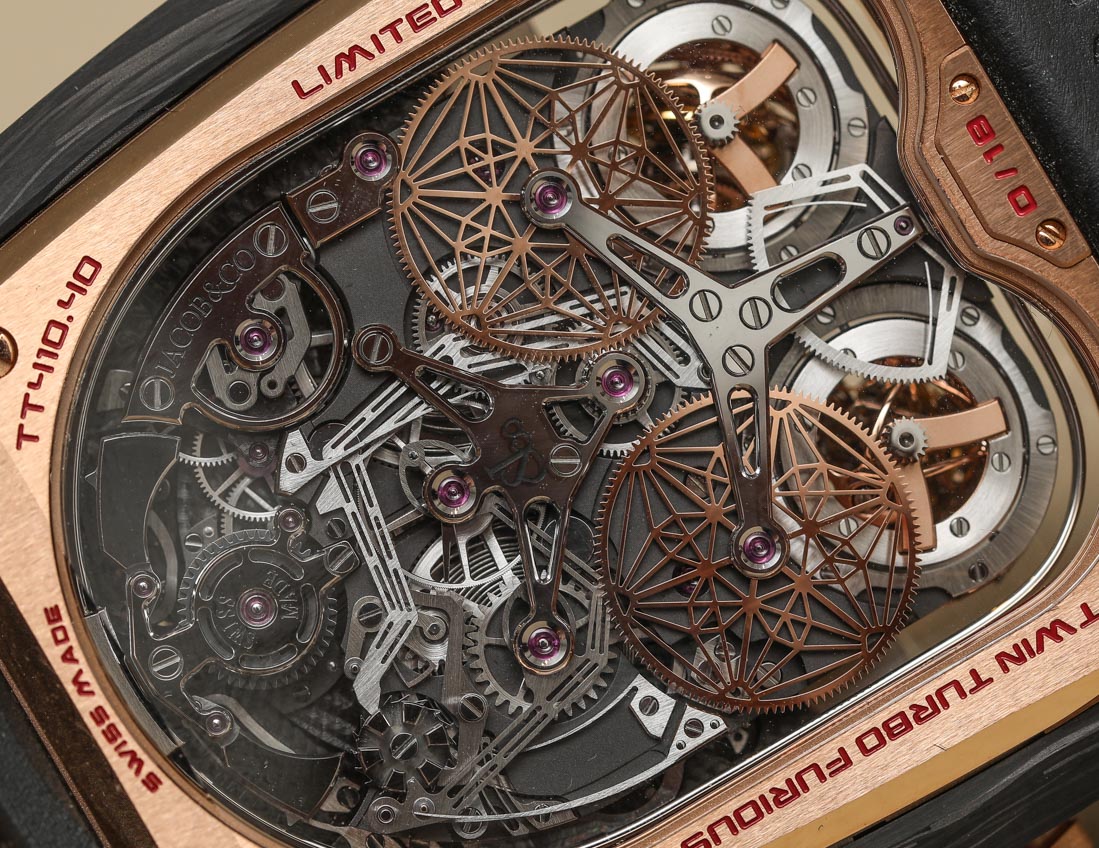 The movement within is the Jacob & Co. caliber JCFM05 and it is visible through a sapphire display caseback. It is a beast of a movement with a staggering 832 components and an unusual architecture. Up top are the hammers for the decimal minute repeater, and working our way down is the column wheel for the chronograph. Dominating the bottom of the movement are two gold skeletonized wheels for the tourbillons.

The movement is highly decorated too, with hand beveled and polished plates and bridges, black polishing on numerous surfaces, circular graining on wheels, barrels, and plates, and polished jewel countersinks. Speaking of jewels, the movement has 75 jewels in all. 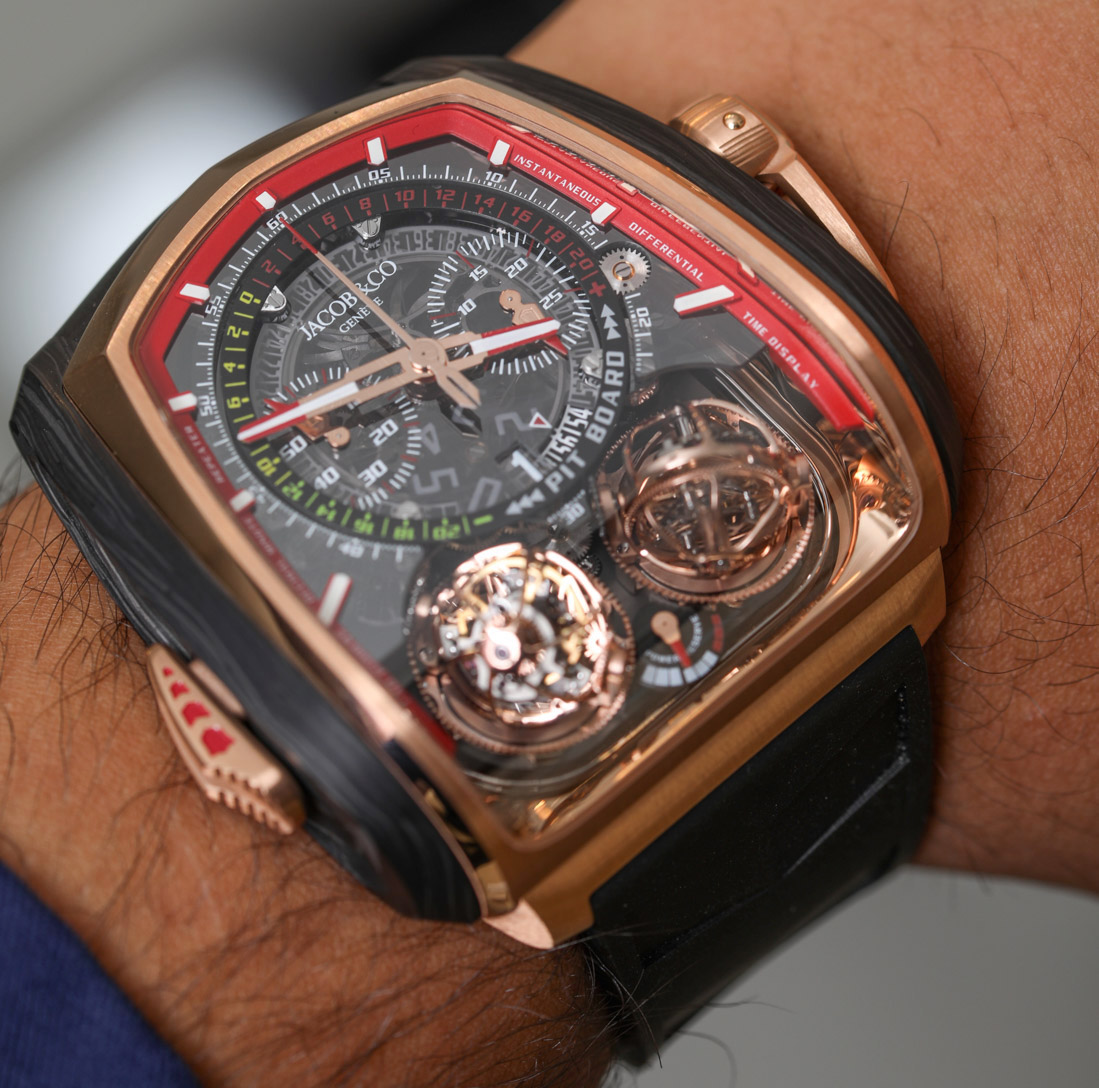 The Jacob & Co. Twin Turbo Furious is one heck of a statement piece. The styling is bold and the technicalities of the watch itself more than match its styling. Despite what you might think about its looks, there is no denying that this is one hell of a complicated watch with some interesting complications. Making a decimal minute repeater is hard enough, but combining it with two triple-axis tourbillons, a chronograph, and a reference time differential is unheard of. Unfortunately, the price for all of this is equally outrageous. The Jacob & Co. Twin Turbo Furious is priced at 525,000 CHF and limited to just 18 pieces. jacobandco.com