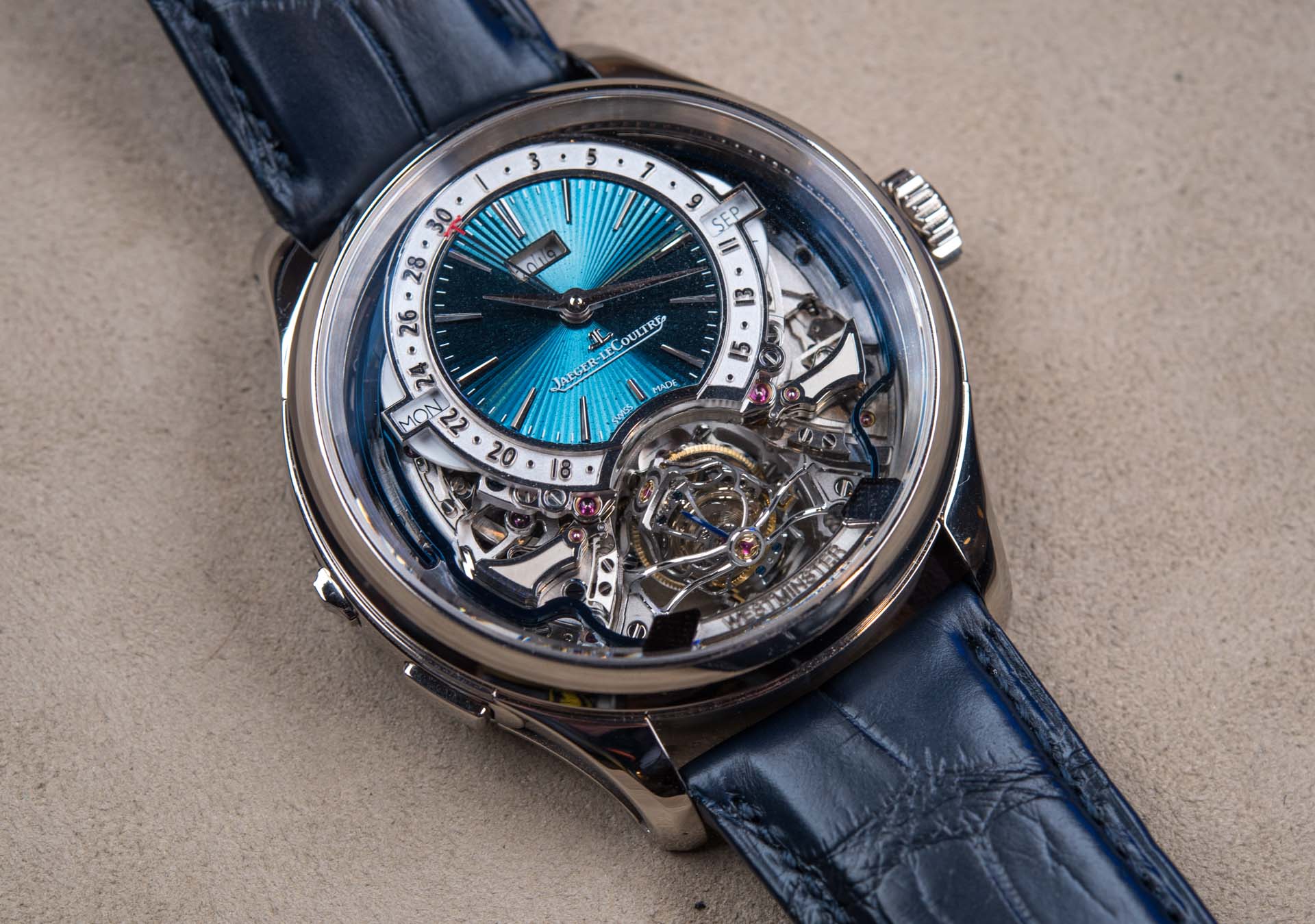 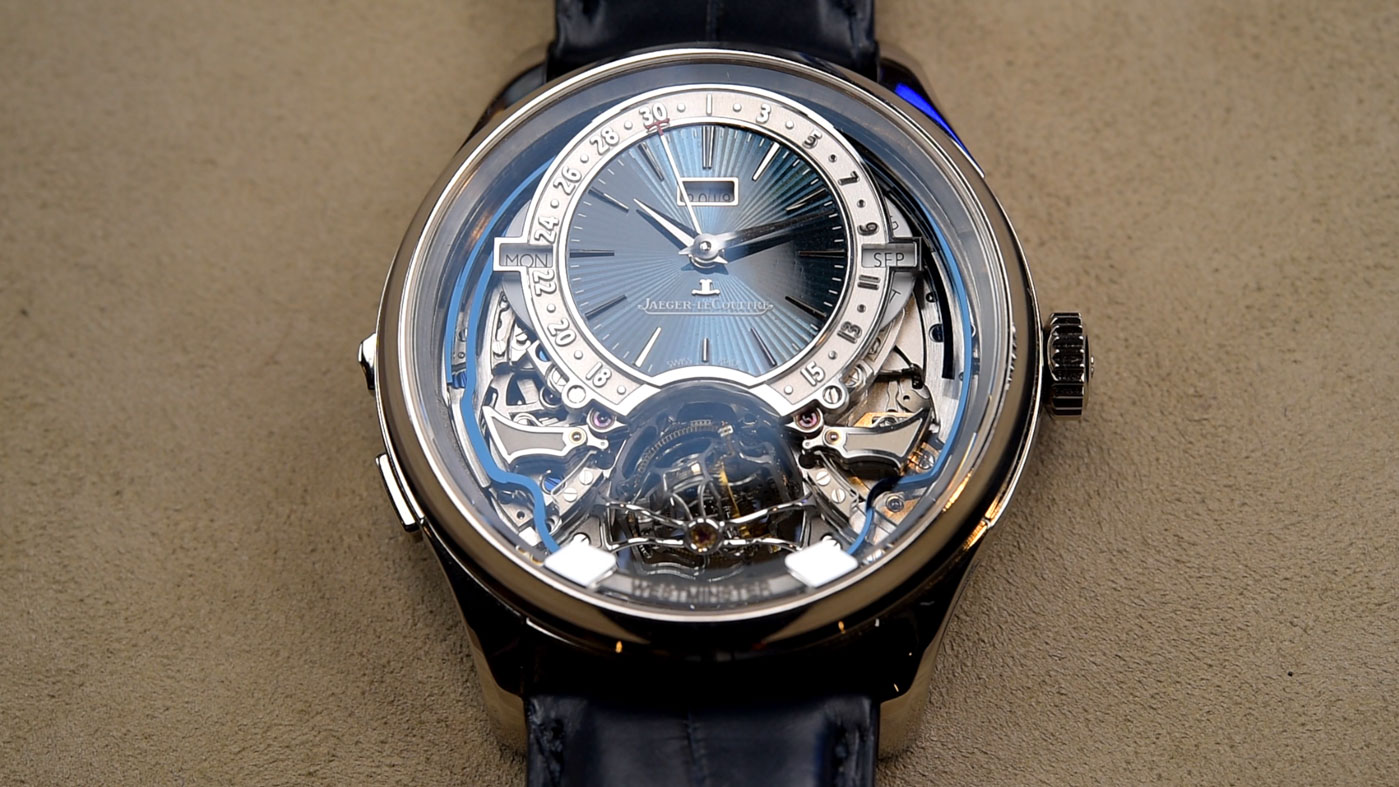 Fourteen years ago, when Jaeger-LeCoultre launched the original Gyrotourbillon I, fine watchmaking was a different world. In those fourteen years, Hong Kong and China have together imported about 50 thousand million (!) Swiss francs worth of watches. That is a lot of watches, including many very expensive watches. Since 2004, the world’s timepiece collectors have soaked up everything from minutely modified Patek 5270s to early Gyrotourbillons, all the way to crazy Horological Machines and other bold exercises from daring independents. In some ways, 2004 was far more relaxed. Outrageous watches such as Grandmaster Chimes, Supersonneries, insanely loud Full Strikes and Music Box watches did not yet exist, so a twist on a tourbillon made talking material for years. Today, the world’s wealthiest collectors are — there’s no other word for it — spoiled. Spoiled and bored. That’s why new-for-2019 timepieces with names such as Jaeger-LeCoultre Master Grande Tradition Gyrotourbillon Westminster Perpétuel exist — and, apparently, need to exist. 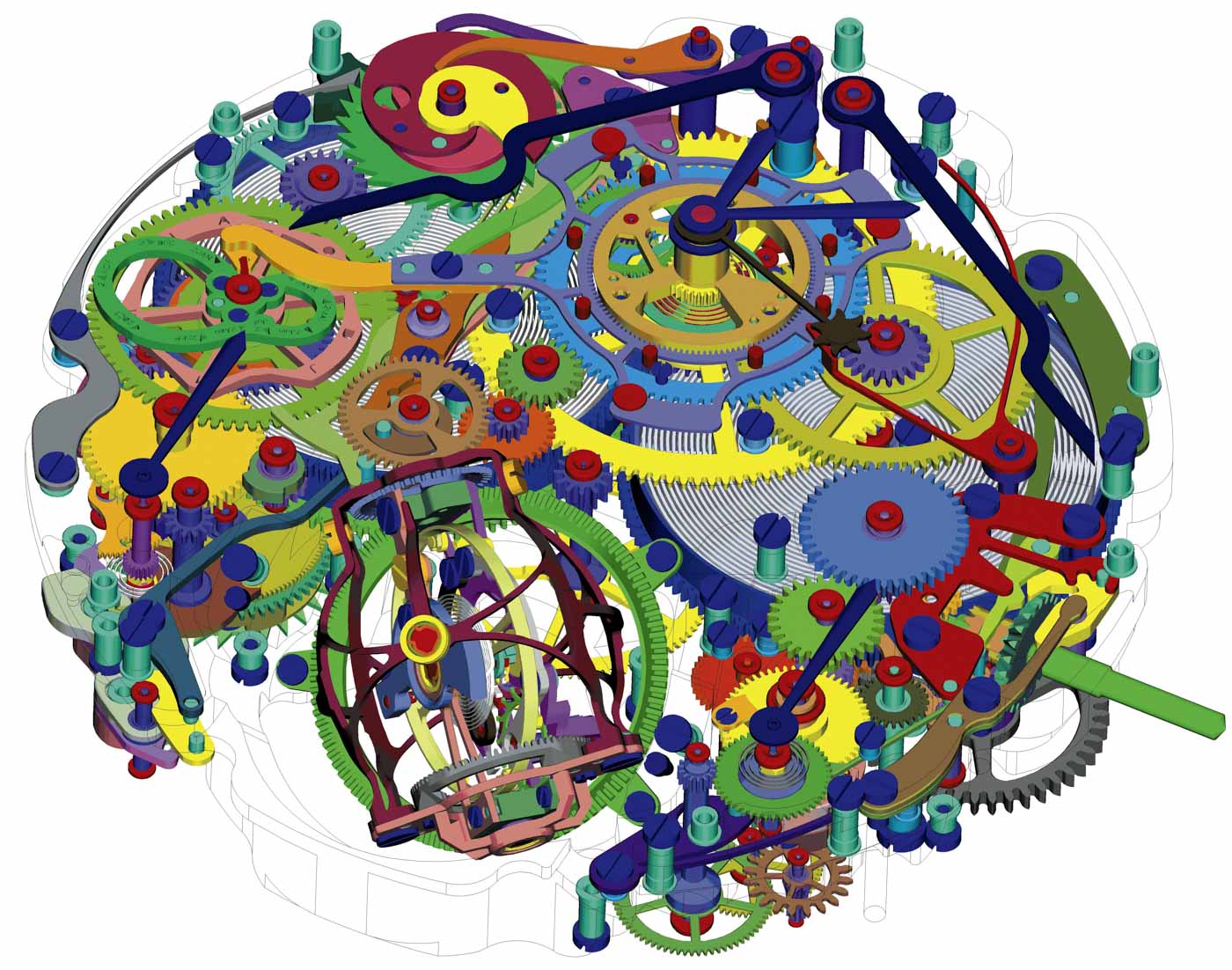 Whatever happened to these cool images for presenting your pieces, Jaeger-LeCoultre? This is the caliber of the Gyrotourbillon I.

The Gyrotourbillon I made a splash — a big one, at that — by being what I believe was the first double-axis tourbillon with two perpendicular axes of rotation. It had a few other positively over-engineered complications, such as a ridiculous bi-retrograde perpetual calendar. The Gyrotourbillon II put all the Gyro-goodness in an absolutely humongous Reverso case. It was a simpler time, and I’ll spare you a more detailed look at how the Gyrotourbillon got ever more complicated through the Gyrotourbillon 3 Chronograph and the smallest-yet Gyrotourbillon Reverso Tribute. Instead, let’s just dive straight into the latest, but only apparently greatest Gyrotourbillon yet: the Jaeger-LeCoultre Master Grande Tradition Gyrotourbillon Westminster Perpétuel. 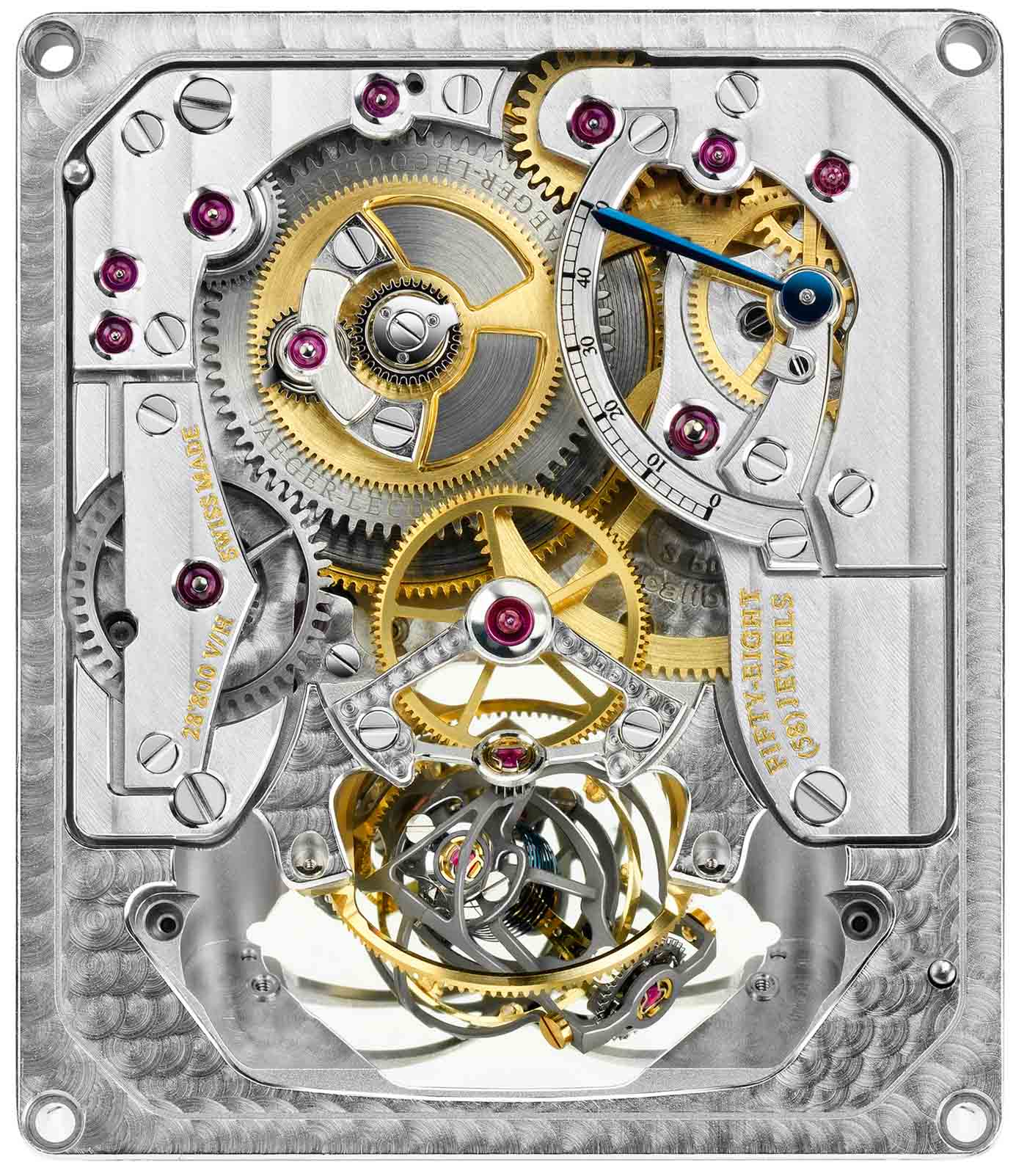 In stark contrast with these fantastic and insightful images, Jaeger-LeCoultre launched the latest Gyrotourbillon with two official images — of the front. Seen here is the Gyrotourbillon II from 2008.

I am not sure, and perhaps we will never know, but maybe it was this arms race that forced Jaeger-LeCoultre into launching the latest Gyrotourbillon years before it was completed, functioning, and ready to be sold and delivered. I can hear some of you asking, “Wait, what?!”  That’s right: the Gyrotourbillon Westminster Perpétuel we saw at SIHH 2019 was neither functioning properly, nor was it ready to be delivered in the foreseeable future. Word is that this latest Gyrotourbillon will be “finished” in late 2020, maybe even 2021. So, why the launch at SIHH 2019? This is a complete mystery. 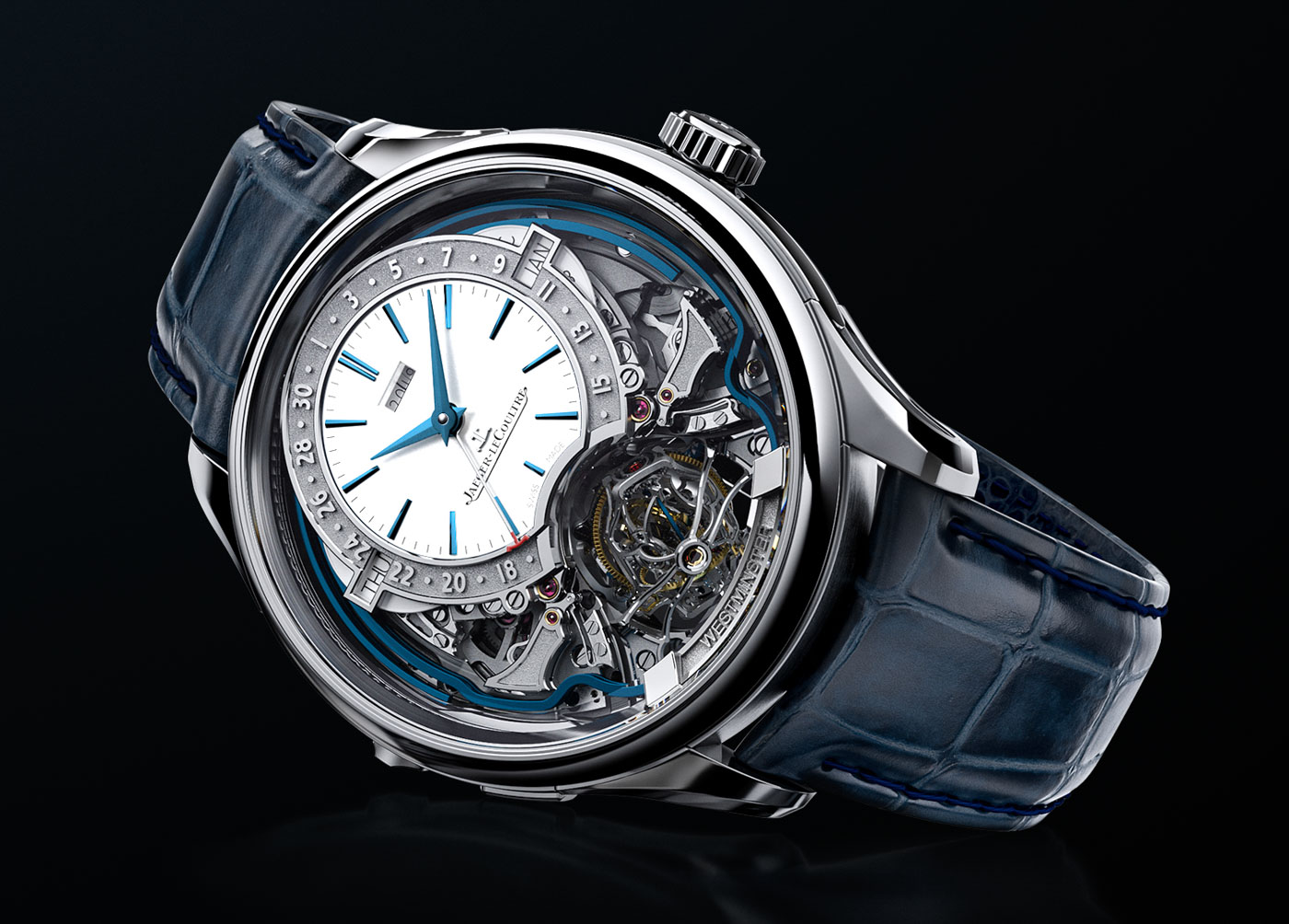 The white dial alternative to the blue grand feu enamel version of the new Gyrotourbillon.

I am telling you all this because, when I first saw the launch images of this piece, it immediately became my grail watch to see, photograph, and video, in order to be able to bring it to you in all its glory. New Gyrotourbillons do not appear every year, and the previous models are like unicorns — extremely rare to see out in the wild, giving us very few opportunities to show you the haute horlogerie side of Jaeger-LeCoultre. You can imagine my frustration when, after waiting for 45-50 minutes with lights, camera, and the whole deal rolling and set up, pre-arranged meetings canceled, as I anxiously waited for this piece to turn up. Finally, it came, escorted by a distinctly unfriendly woman and a young watchmaker, who carried the piece around in what I could assume was a very heavy and unwieldy presentation case. 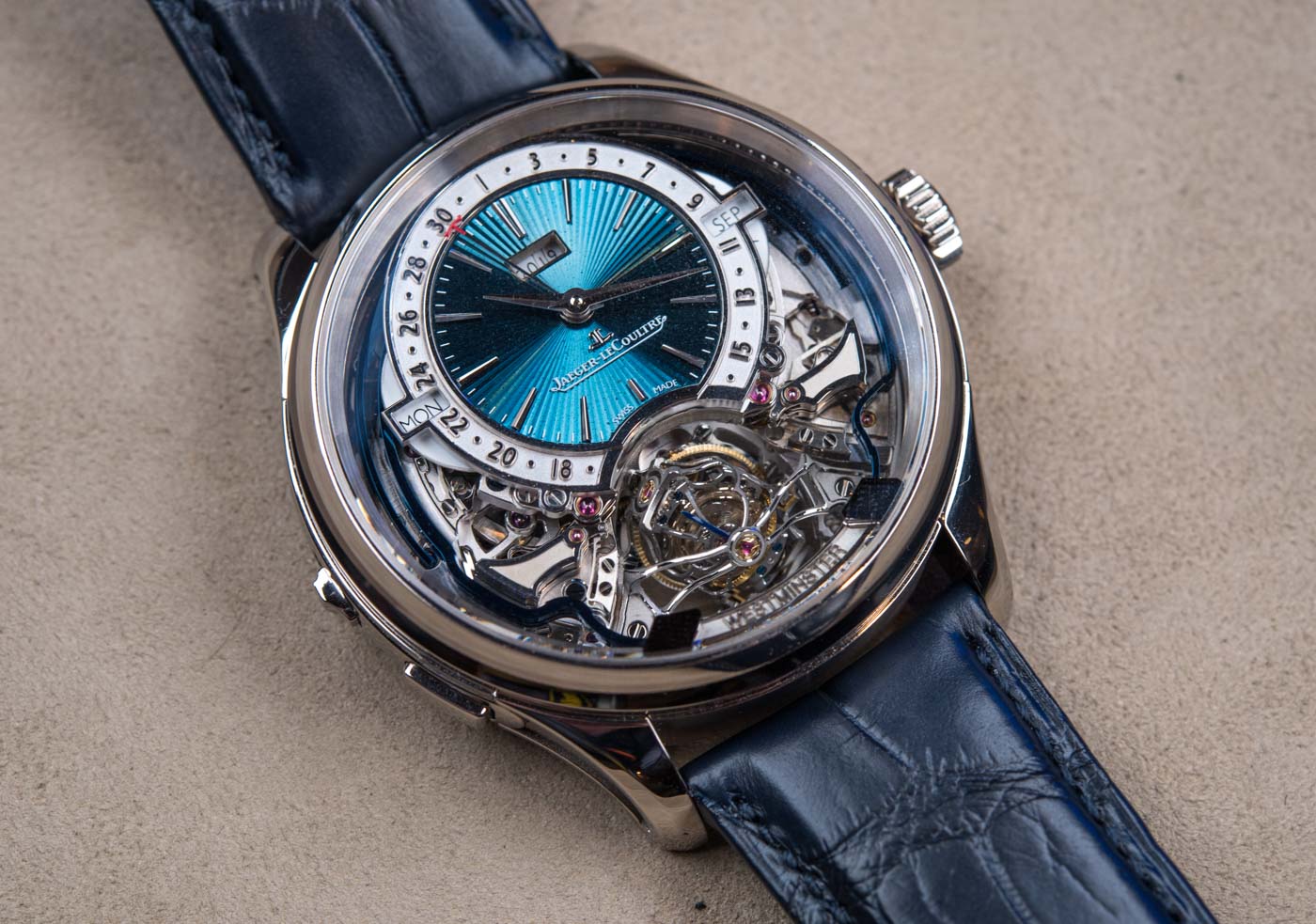 At last, the case opened and voilà, there it was: the all-new Gyrotourbillon, by far the most complicated of its kind to date, ticking away. From afar, the watch is shockingly impressive-looking, as though a regular watch case had given home to a complex mechanism growing out of it. Its case is a mere 43 millimeters-wide and just 14.08 millimeters-thick, while this Gyrotourbillon packs what I expect to be around 600-700 components. I say “expect” because Jaeger-LeCoultre did not specify exact component counts, apparently.

The mystery your eyes try — and most definitely fail — to unfold is a combination of a four-gong Westminster chime minute repeater with some of the weirdest-shaped gongs ever, a perpetual calendar with central date, an extra small gyrotourbillon and a hand-guilloché-decorated and grand feu enamel-covered dial. There is a lot going on, and it’s all wrapped into a case the size of a Sea-Dweller. 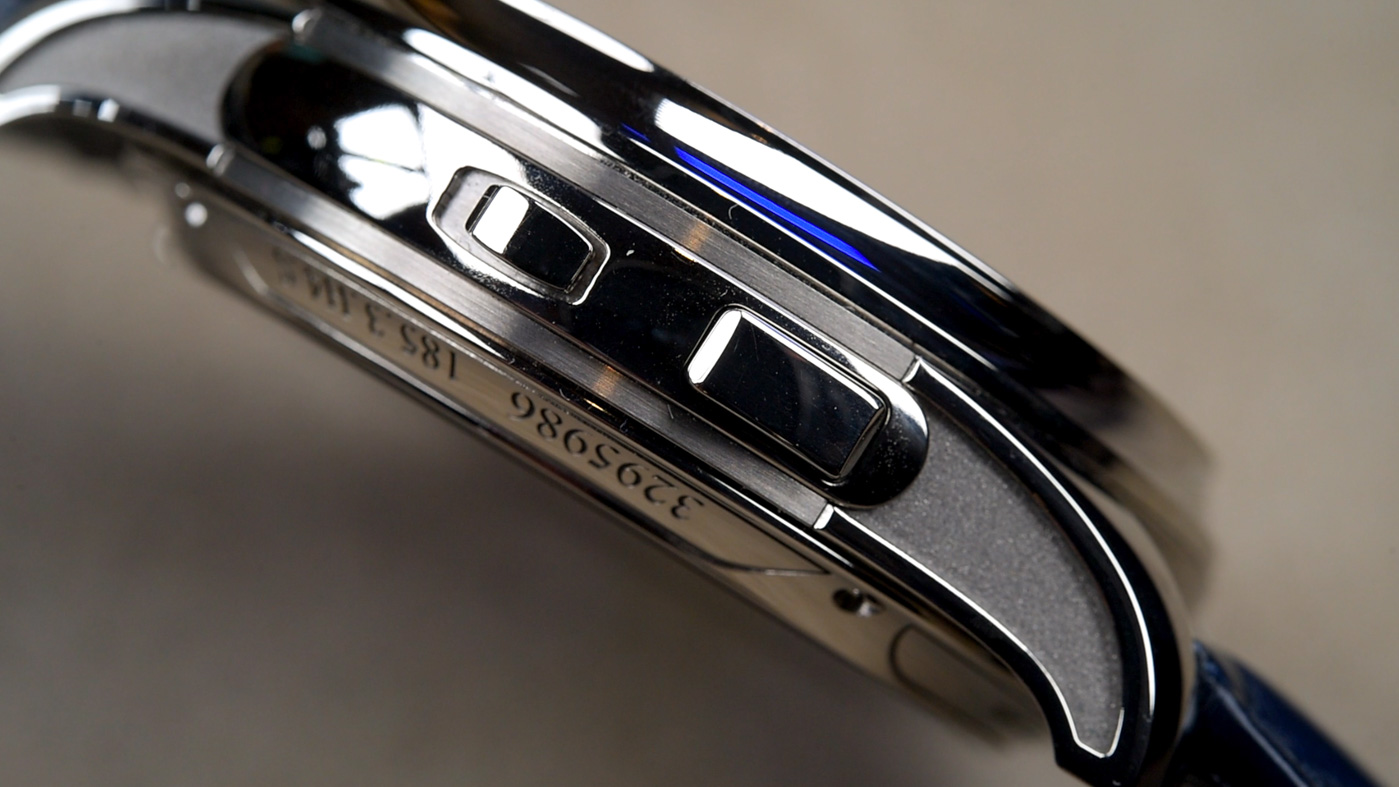 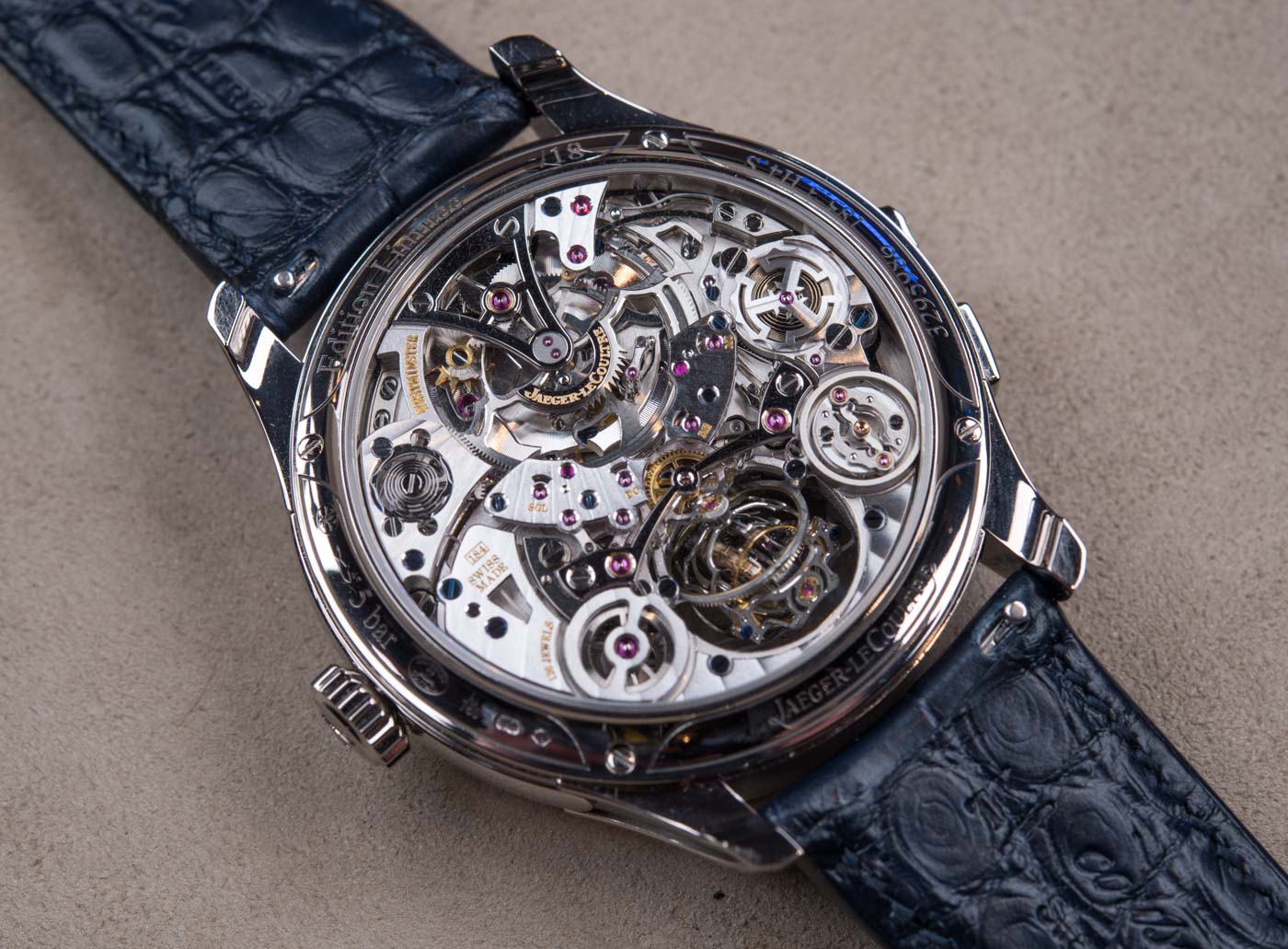 The caseback is equally breathtaking (from afar), just as one would expect after seeing the front. Those with a trained eye can spot the silent governor (to the right of the tourbillon) that regulates the chime, while to its left resides the one-minute constant force remontoir (spelled “remontoire” in English). Given the Westminster chime, there are not the usual two, but rather four gongs — they are marker sol, do, re, and mi on the caseback, right where the gongs are. This entails a massively more complicated chiming mechanism, meaning more snails and wheels and, well, more of everything, really, in the top half of the movement. 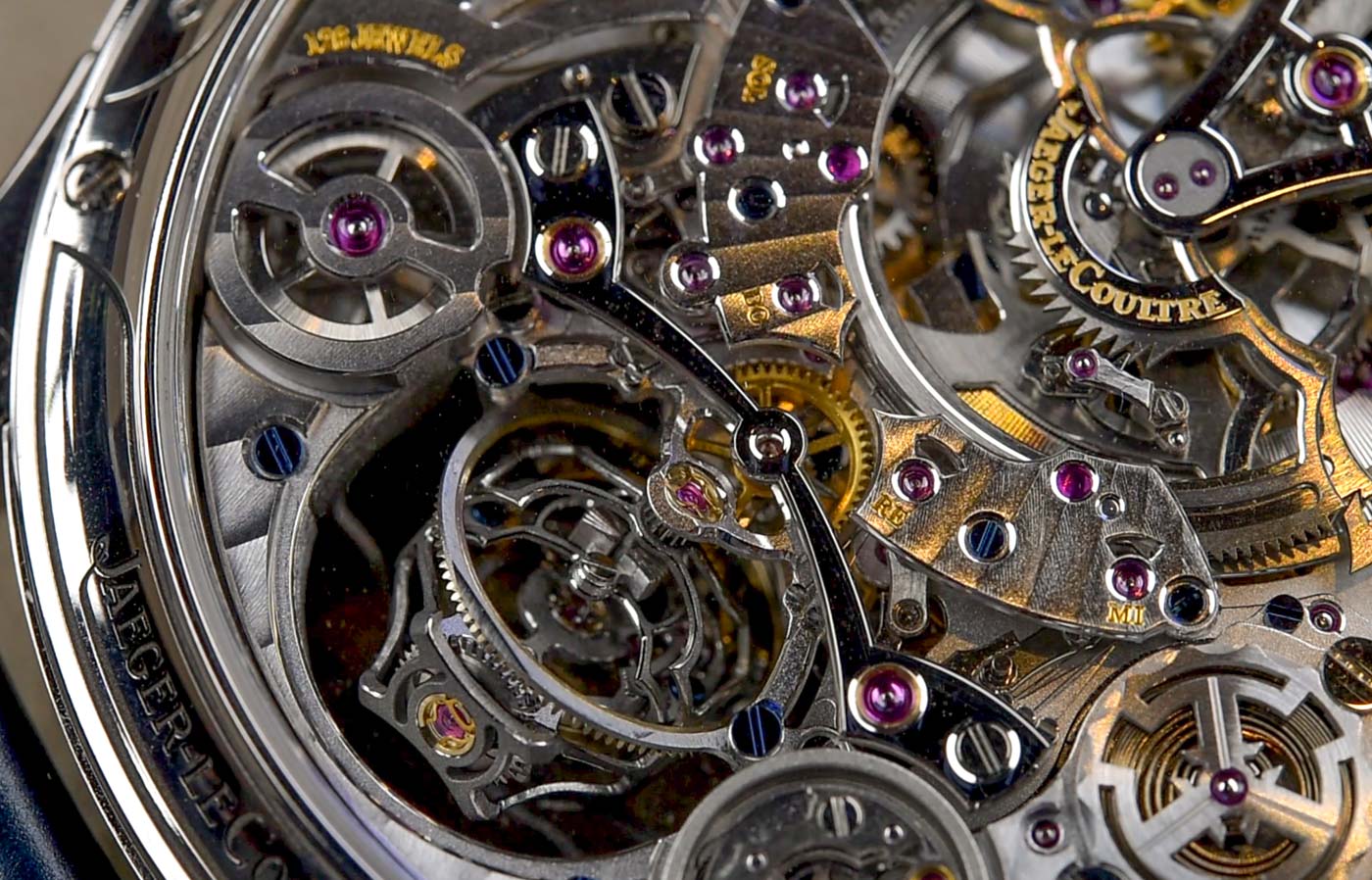 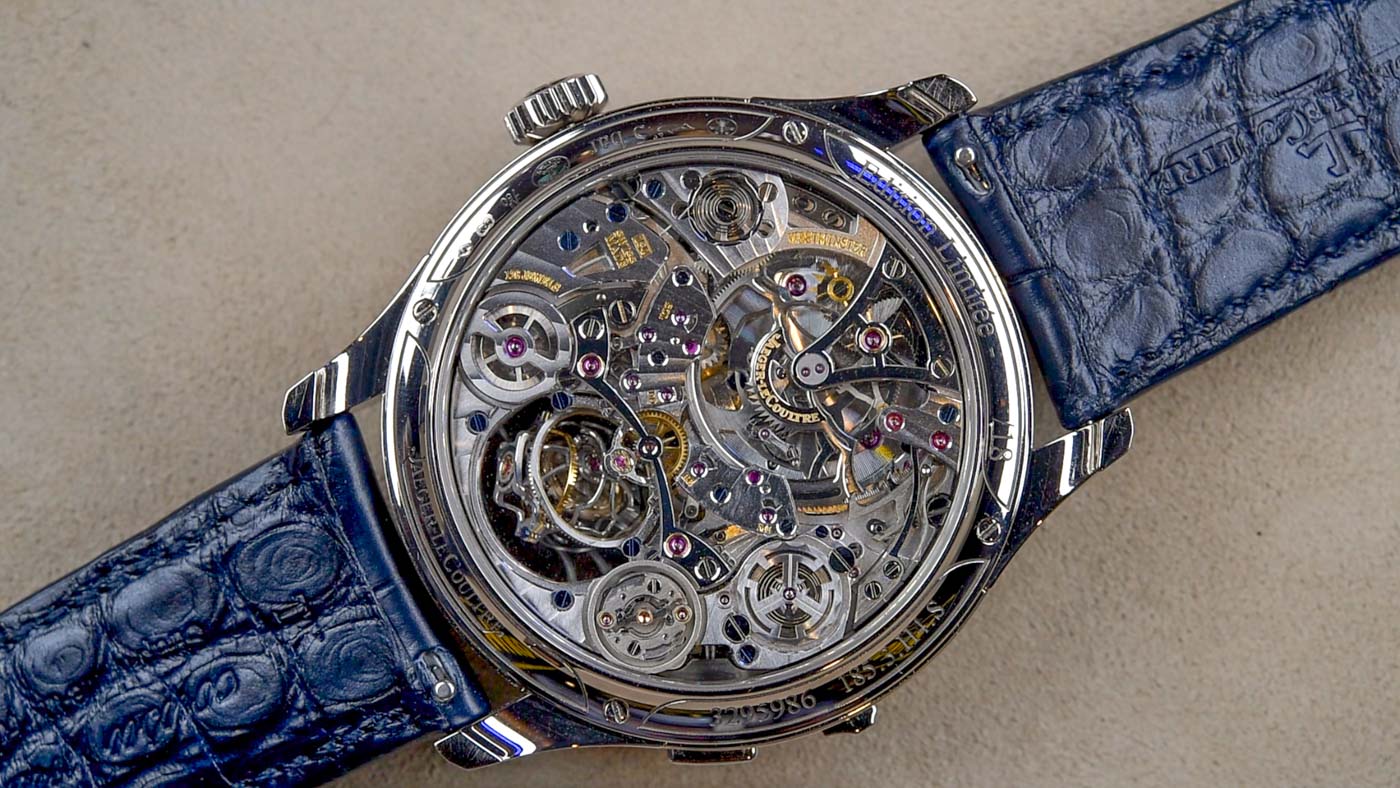 Unfortunately, the Master Grande Tradition Gyrotourbillon Westminster Perpétuel we saw at SIHH had a dysfunctional minute repeater, though word reached me that one of the two pieces displayed did work for a very short while on day one, hardly any solace for the 99% of watch-lovers, including us, who could only look at the minute repeater, but not present its sound and functioning to our audience. As much as I love watches, I find it funny how people at major brands often act as though showing a watch to us was a favor for our inner watch enthusiast. I don’t think it is. Our job there is to take as many enticing images and videos as possible and present them to you so that you can enjoy, discuss, and learn about these things. 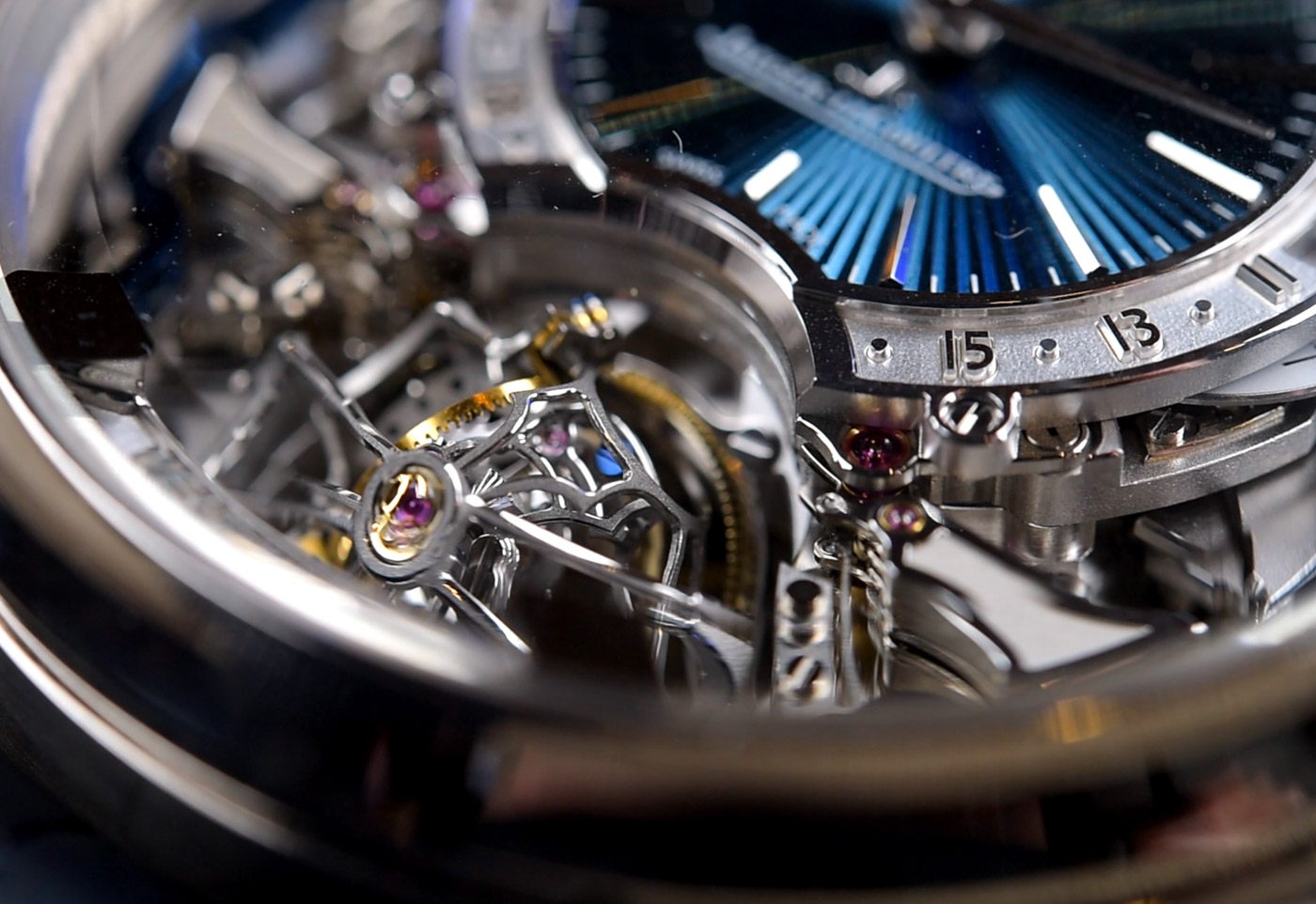 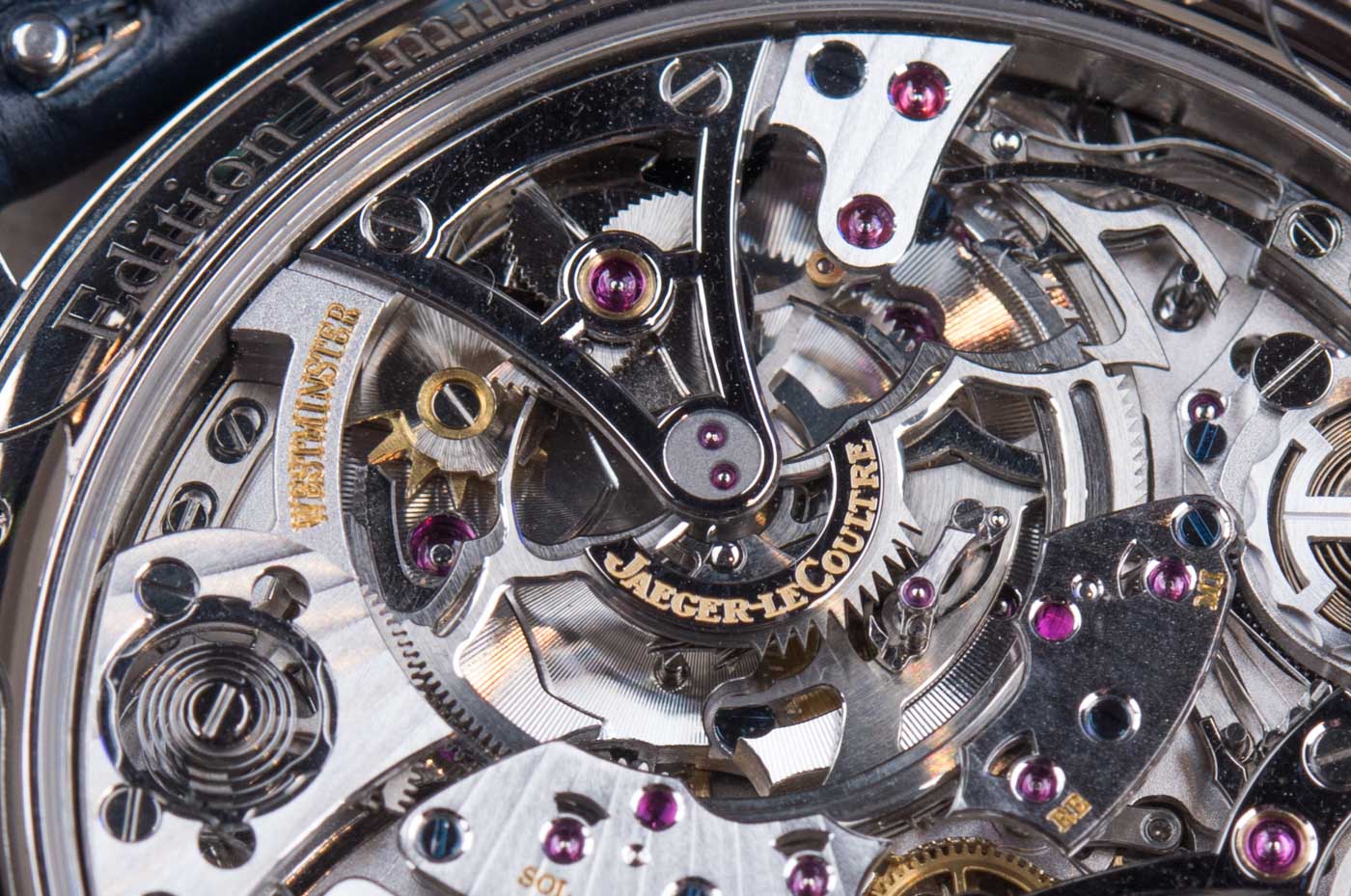 On that note, we had such a short time (about 3-4 minutes) with the watch that we could only shoot video, but not images, so I do apologize for the screenshots I had to grab from our video footage — but you can check it out in motion in the video below.

Still, the video itself sufficed to reveal what appeared to have been either a very dirty inside of the crystal and/or (I am afraid that’s an “and”) dirty bridges and dial. I don’t know about you, but as far as I am concerned, any watch that says Jaeger-LeCoultre on it, should never, ever have any dirty or poorly finished components on it, anywhere — and I feel like saying, “That’s especially true for halo pieces,” but no, it’s true for each and every JLC ever made. 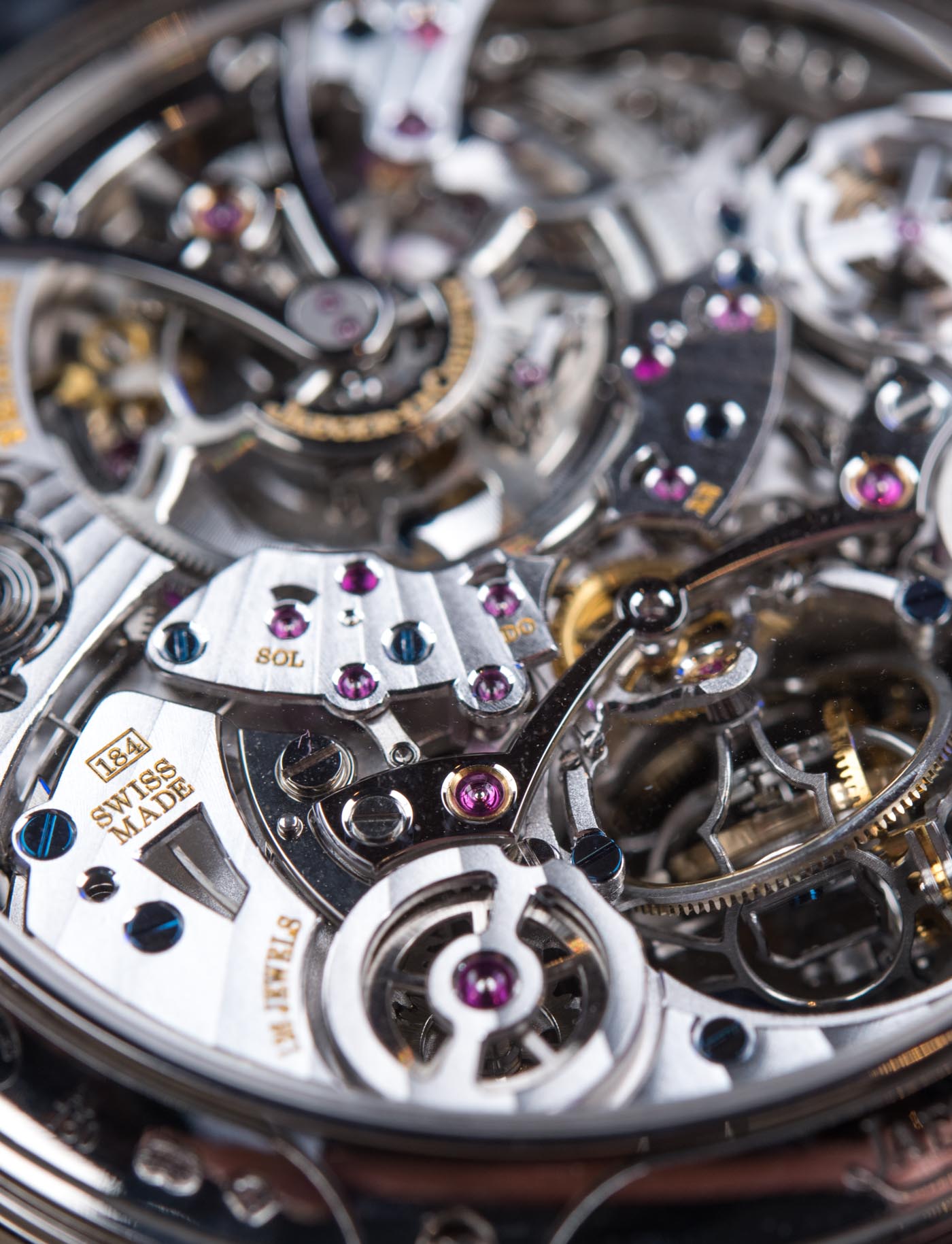 Is it a privilege to see a Gyrotourbillon? Always. But that can only partially erase the bad taste left after seeing it in such a state. The dirty dial, dirty hands, grimy screws and bridges, and pieces of lint inside such a movement are just as disappointing as is the fact that it did not work. Again, this watch is not to be available for another two to three years, and though I’m sure the final pieces will not have these issues, it still makes one wonder: Why launch it now, and why launch it in such poor shape?

Last time I checked, SIHH is happening in 2020, and I can’t help but feel that this watch needed another year’s work. The icing on the cake was that on day three, by the time our Jaeger-LeCoultre meeting commenced, no one was allowed to wear the watch — though that says more about our colleagues who forced JLC into introducing this measure than it does about the watch or the brand. 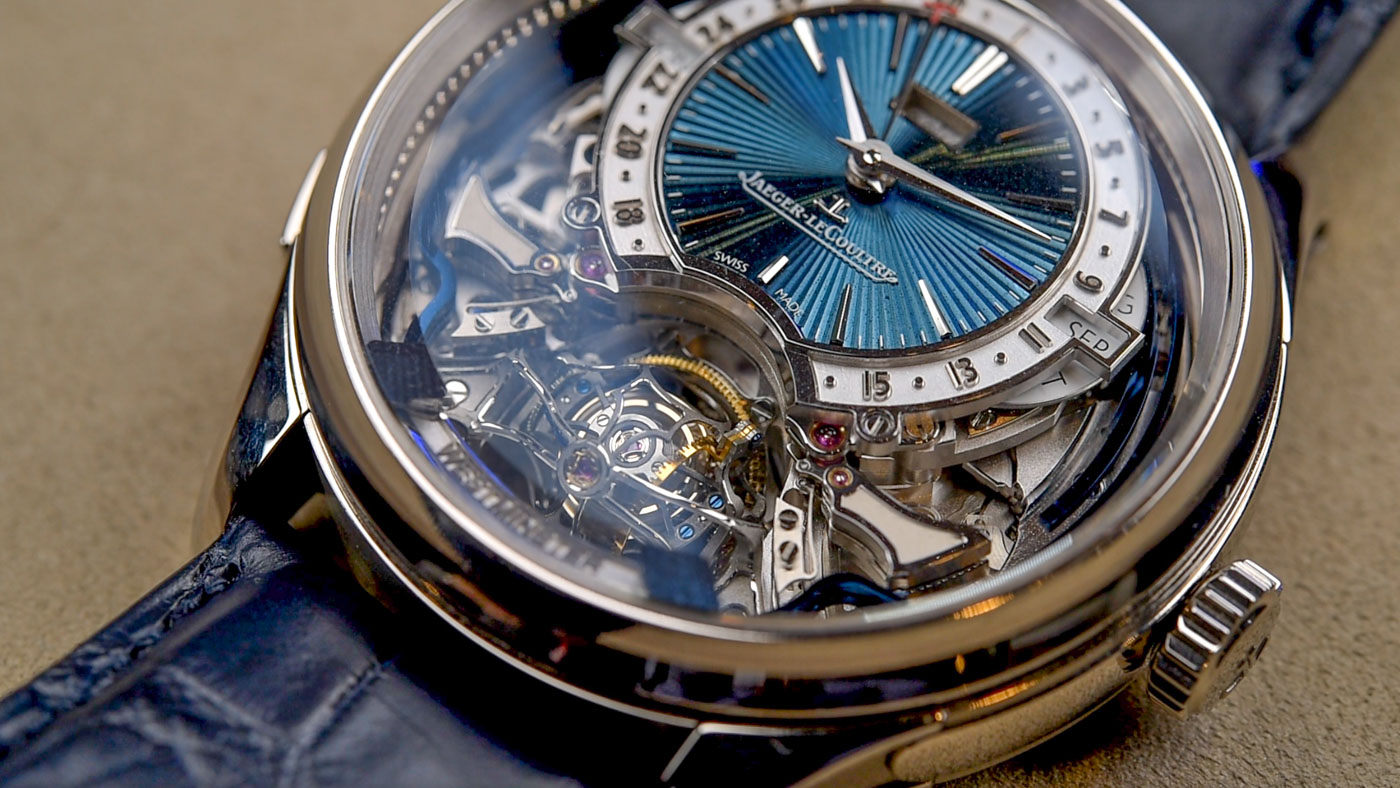 Creating a watch of such immense levels of complexity is a gargantuan effort, and it seems that Jaeger-LeCoultre has been tricked into a bit of an oopsie. This, the lack of proper in-depth presentation, and such a premature launch of a timepiece in an unfinished state make me wish that this fantastic company focused much, much more on its products — and a lot less on everything else. And I haven’t even mentioned their three additional novelties for 2019.

Doubtless, the Jaeger-LeCoultre Master Grande Tradition Gyrotourbillon Westminster Perpétuel will be an absolutely fantastic watch — eventually, when it’s truly ready for showtime, in 2020 or 2021. When that happens, it will be available with white dial or a blue grand feu enamel one, limited to 18 pieces and costing a whopping €800,000. If that isn’t enough sticker shock, check out the price on the three other novelties on the official website.