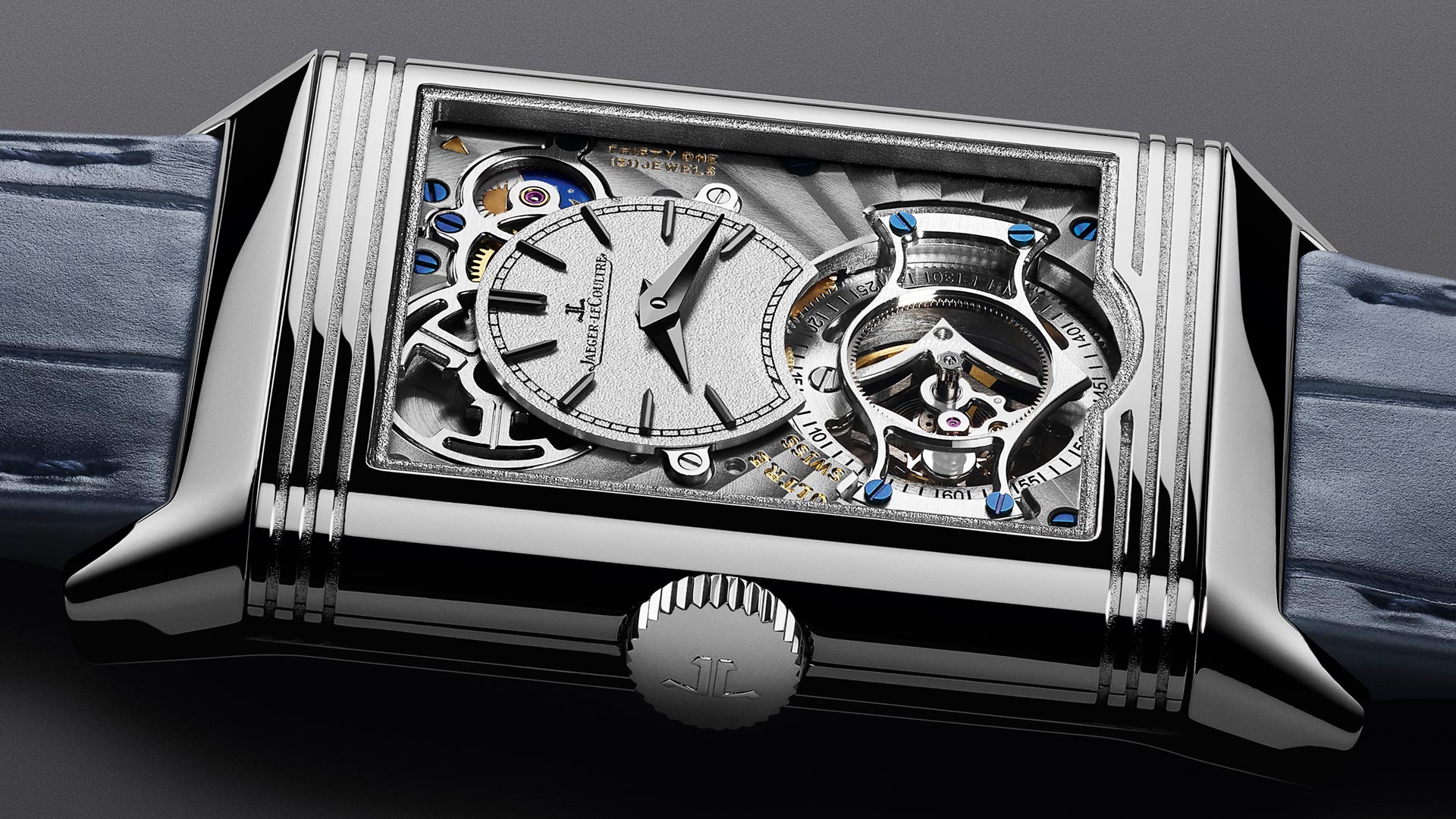 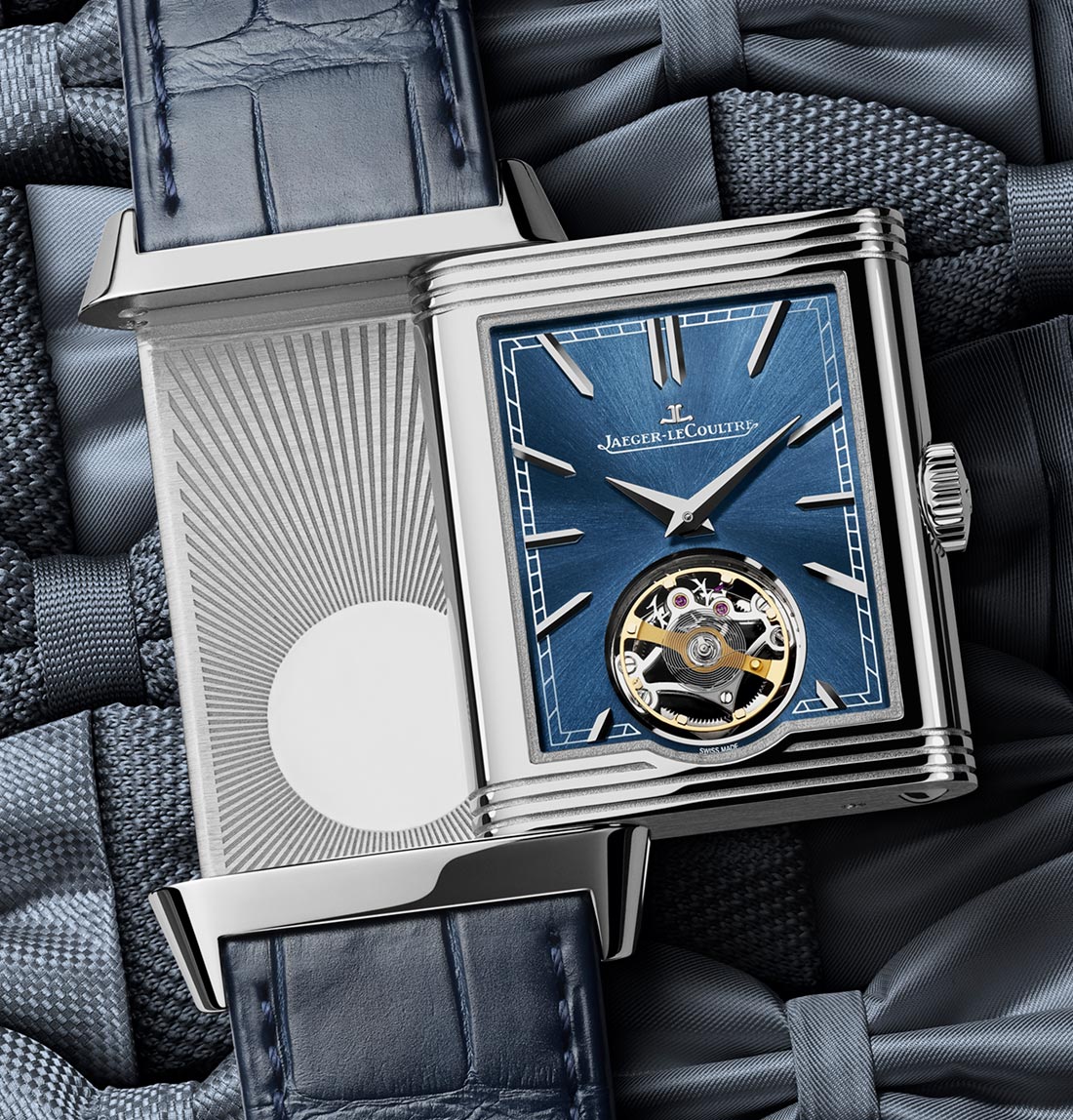 Out of the blue, Jaeger-LeCoultre launched the Jaeger-LeCoultre Reverso Tribute Tourbillon Duoface, a watch that, as expected from any recently introduced JLC, forcibly features the word “Tribute” in its name… Even if it is, in fact, totally new, with a new movement ticking away inside. Yep, that’s me still not getting over why such a great brand with powerful innovation, unique design and over 1,200 calibers embedded in its past, has to be so unfathomably hooked on dwelling on its past and creating one re-creation after another tribute after a jubilee after… And even when it’s new, still not call it that. Ehh. 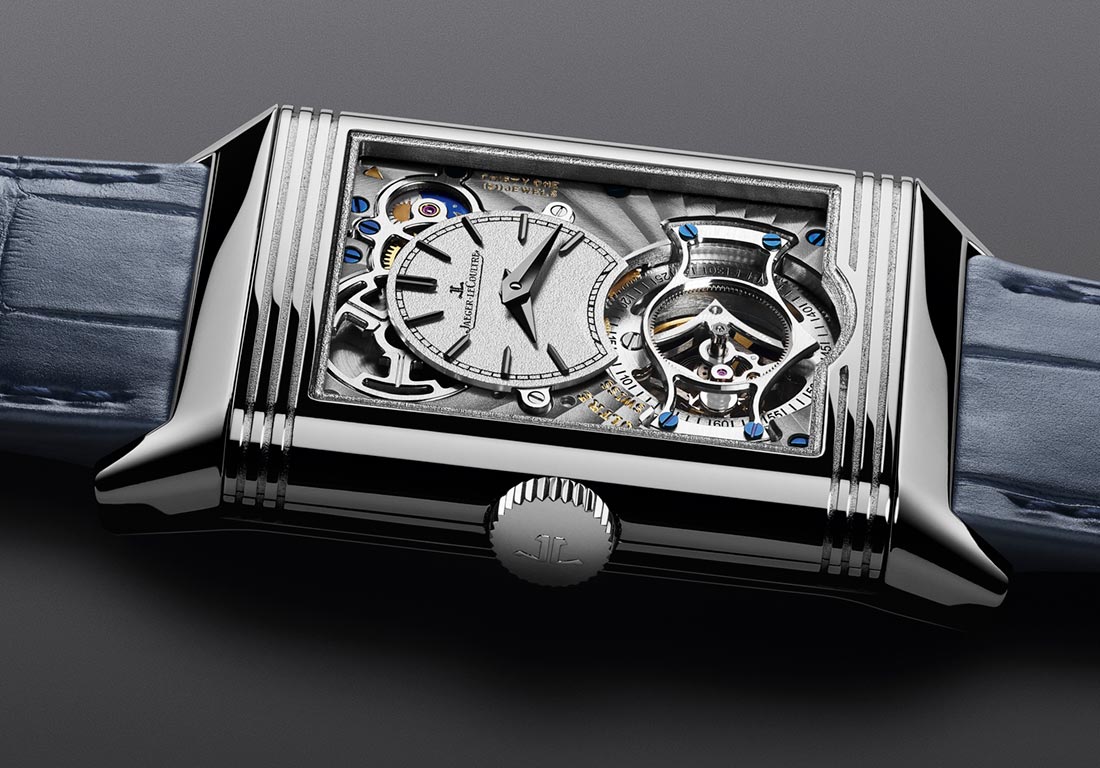 “Tough crowd!” – you may feel inclined calling me, and I guess you’d be right. So let us focus on the positives – of which there are many. First things first, this very piece is the debut of a Jaeger-LeCoultre Reverso Duoface with a flying tourbillon in it. A flying tourbillon “flies” because it’s secured only from underneath – with underneath being a well-understood spot in 99% of all watches ever made. In a Reverso, that is of course a matter of seconds to be changed entirely, with the flipping of the case now providing some proper wrist time for the Dark Side of the Flying Tourbillon – if there ever was one. 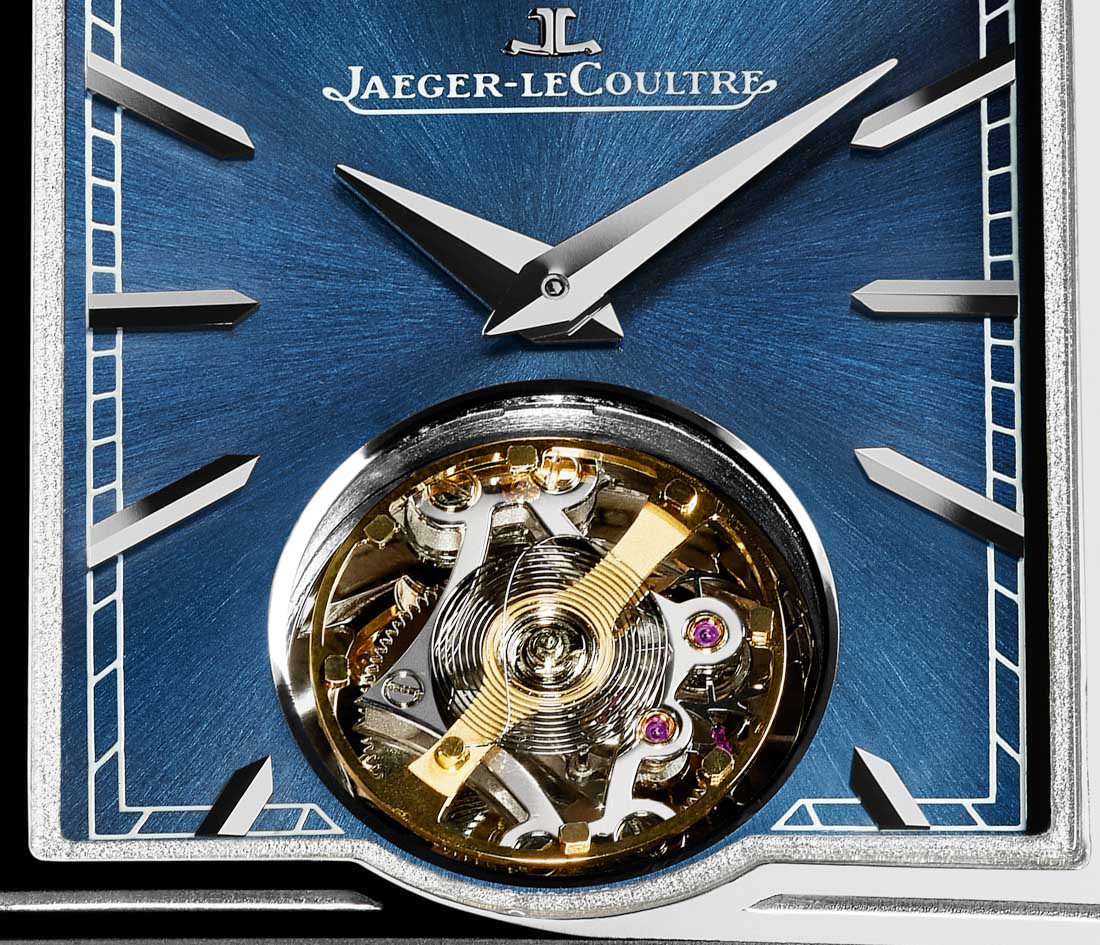 Hardcore JLC (and/or haute horlogerie) fans will quickly recognize that the “Recto” face, i.e. the regular side of the watch with the crown falling to the right hand side of the case, displays a tourbillon that appears to be a mix between the one we saw in the Hybris Mechanica 11 Minute Repeater Tourbillon (hands-on here) and in the Reverso Tribute Gyrotourbillon (one of my all-time favs that I went hands-on with here). The balance wheel itself is what we saw in the HM11, while the carriage underneath – that neatly mirror polished, steel arrangement in the bowels of the tourbillon – looks a lot like that in the aforementioned latest Reverso Gyrotourbillon. 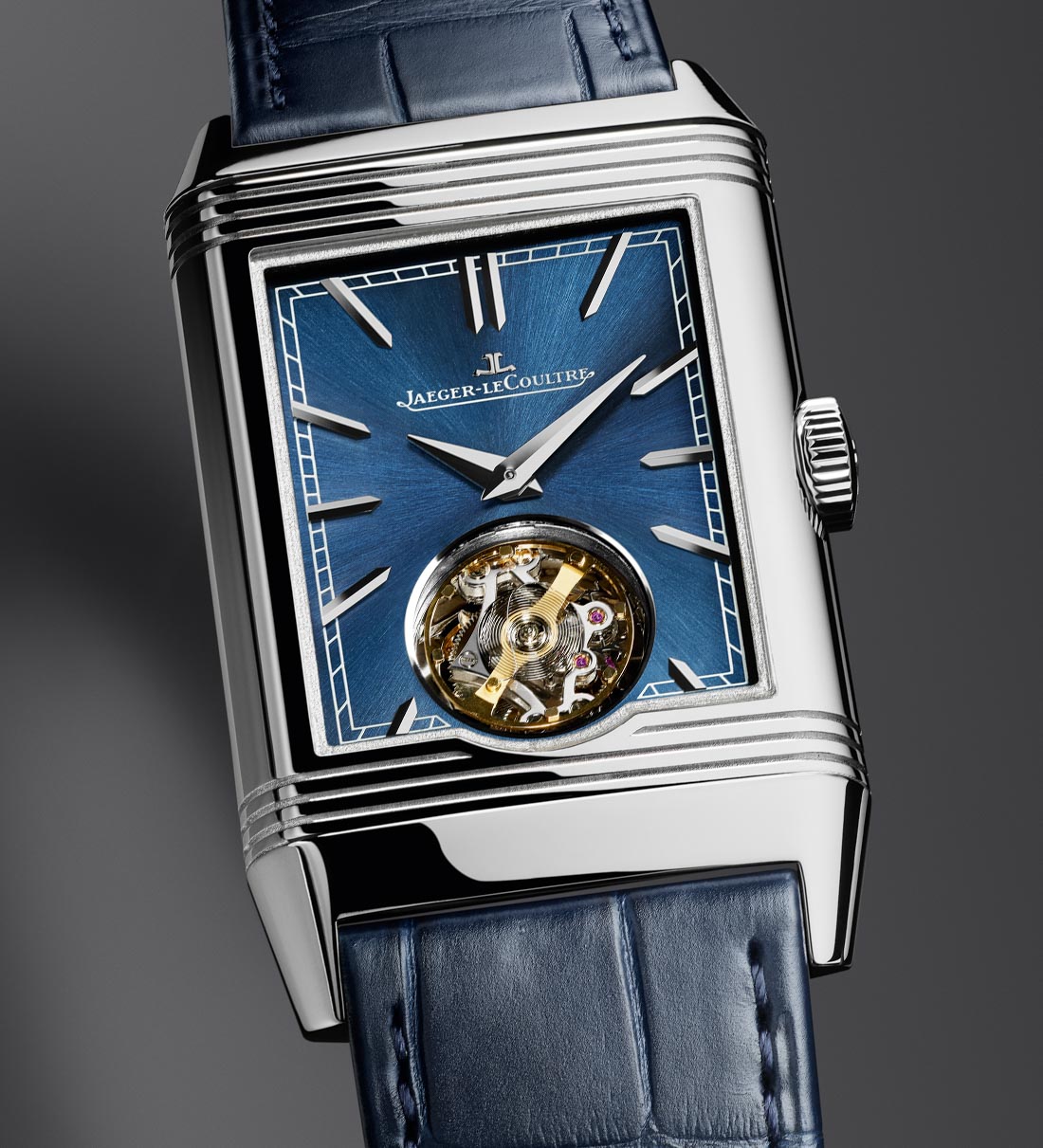 Nevertheless, the hand-wound Jaeger-LeCoultre Calibre 847 is new, as it’s the first to blend the flying tourbillon with the “Duoface concept” – official communication keeps referring to it as such, even if it has evolved far beyond being a mere concept. The Duoface allows the Reverso to display two timezones on its two dials – with the Verso side sporting a day-night indicator at the 2 o’clock position of the silver sub-dial. 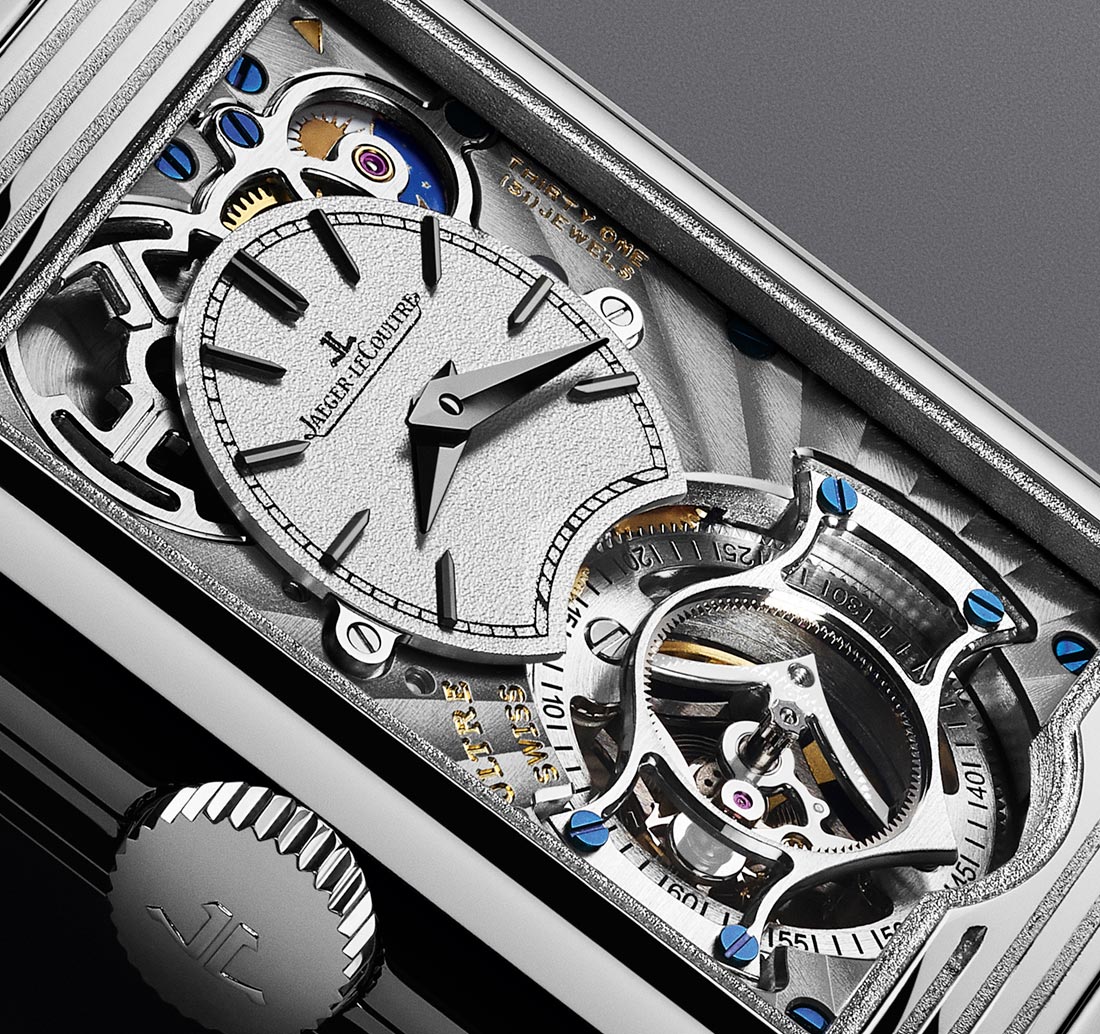 A neat detail that I can certainly appreciate is that JLC remembered to add yet another extra functionality to the Verso side: the flying tourbillon on this side also acts as a running seconds indicator, thanks to the 60-second track printed on the periphery of the inverse side of the tourbillon carriage. You could consider the pointy end of the – neatly skeletonized – lower supporting bridge to act as the seconds indicator. This is the sort of detail that gets at least some of us watch nerds excited. 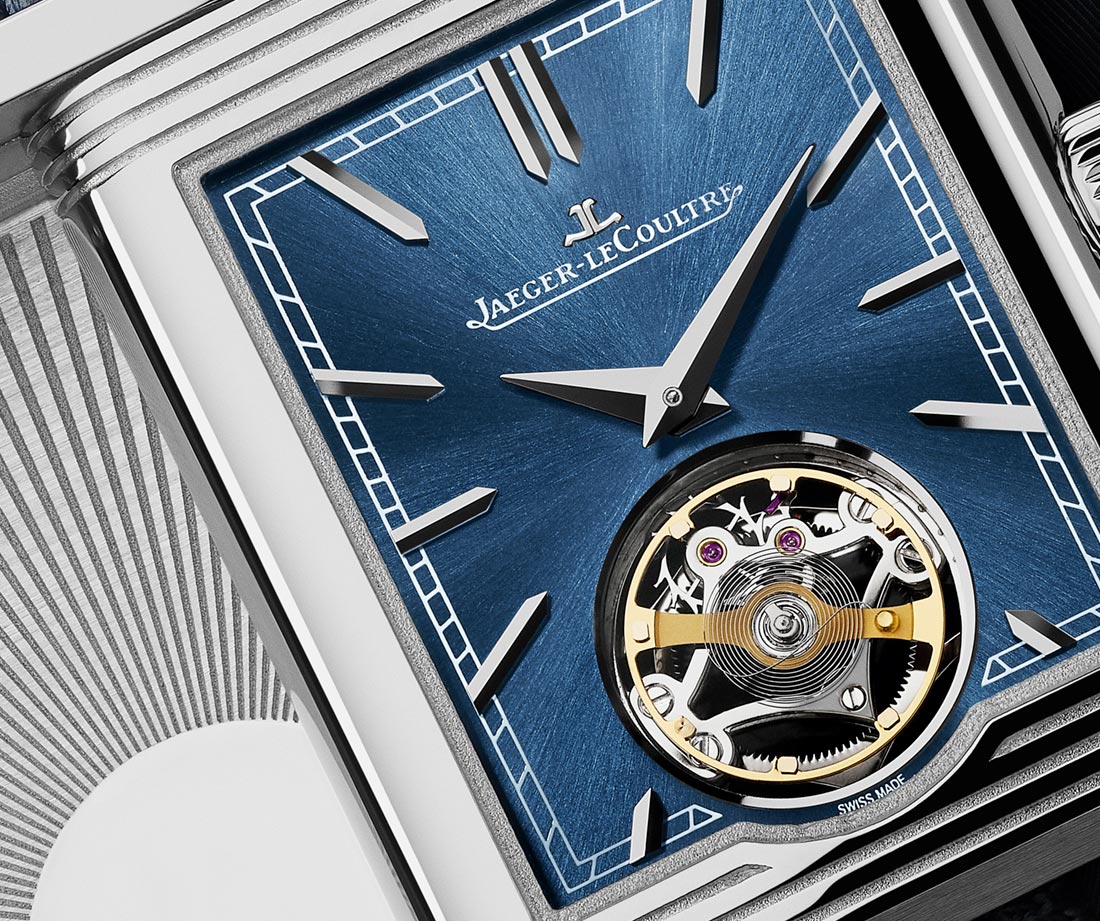 Wrapped in a 45.5mm x 27.4mm x 9.15mm case in rock solid platinum, although this particular Reverso maintains comfortably wearable and stunning looking proportions, you bet it will also make you feel the substantial weight of fine Swiss watchmaking. Oh boy, what a beautiful metaphor, that is.

Although there have been a number of amazing Reverso tourbillons, thus far most of them were so discreet in their design, there’s a good chance we encountered a handful of them out in the wild – without ever realizing that the subtle, classy Reverso that we saw actually featured a tourbillon. That’s because most Reverso tourbillons up to this point showcased this understandably popular “complication” on their Verso sides, allowing one to either show it off in all its glory by flipping the case, or hide it entirely by simply wearing the watch with its solid dial side on top. So, unless you knew a particular dial design was reserved for one of these more special Reversos, you didn’t even knew you should ask to see the flipside… That, of course, is changed entirely with the Reverso Tribute Tourbillon Duoface, for it proudly displays the tourbillon on both faces. 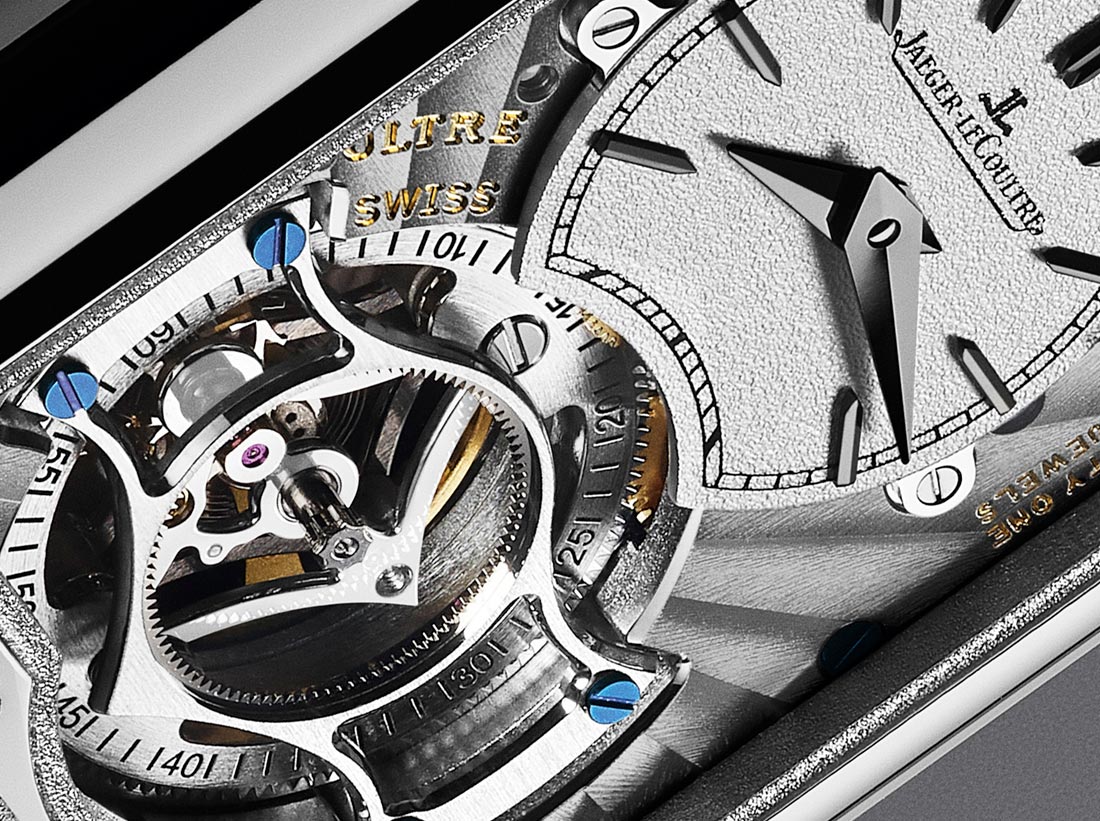 It not being a fancy Gyrotourbillon, you’d reasonably expect the price to be lower than the crazy-spinning Reverso tourbillons of recent times – and you’d be right. Price for one of the 50 Jaeger-LeCoultre Reverso Tribute Tourbillon Duoface pieces is a funky $123,000, or less than half that of the Reverso Tribute Gyrotourbillon. I’d readily call that a bargain – if only these two watches existed. jaeger-lecoultre.com