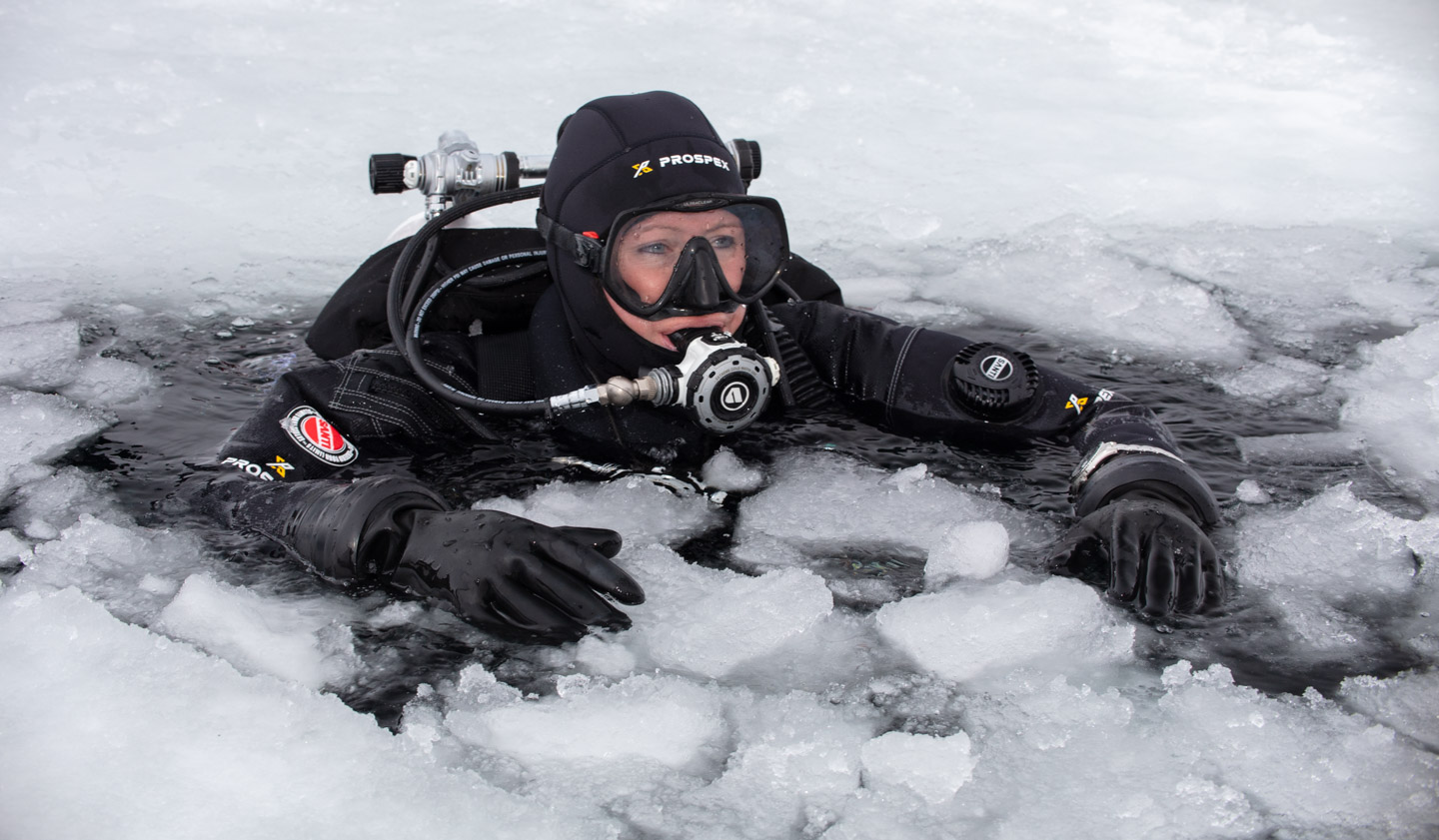 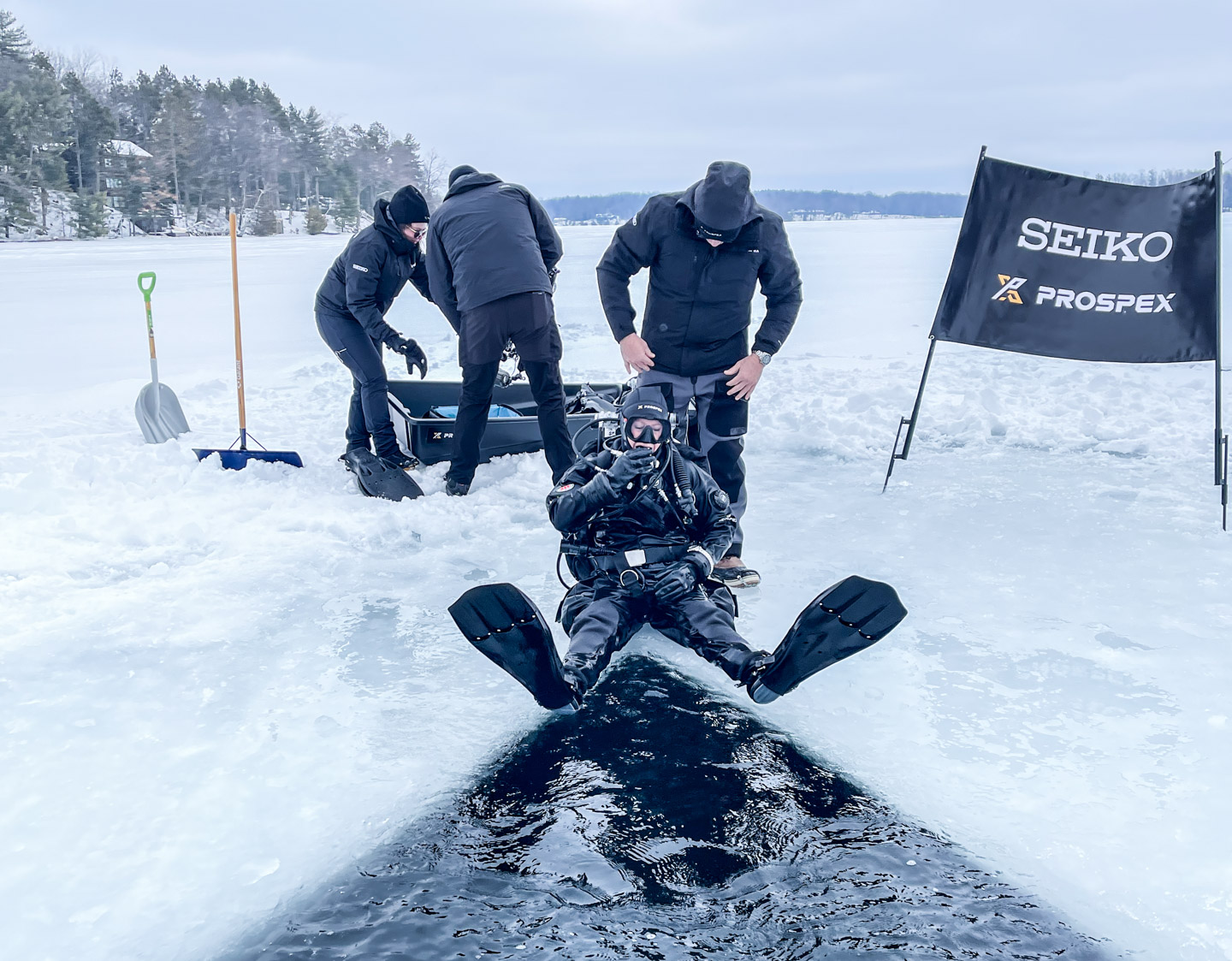 “Bring your warmest clothing,” the message stipulated. Nearly one year into the global pandemic and my first opportunity to get out of Los Angeles is to the frozen north where Seiko’s U.S. team is testing out the Prospex Ice Diver watches (debuted on aBlogtoWatch here). Weighing the pros and cons of travel, my hunger for adventure dominates and I succumb to Seiko’s siren song and dust off my suitcases. From traveling monthly to stationary living in California, I worry that my airport navigation skills are rusty. 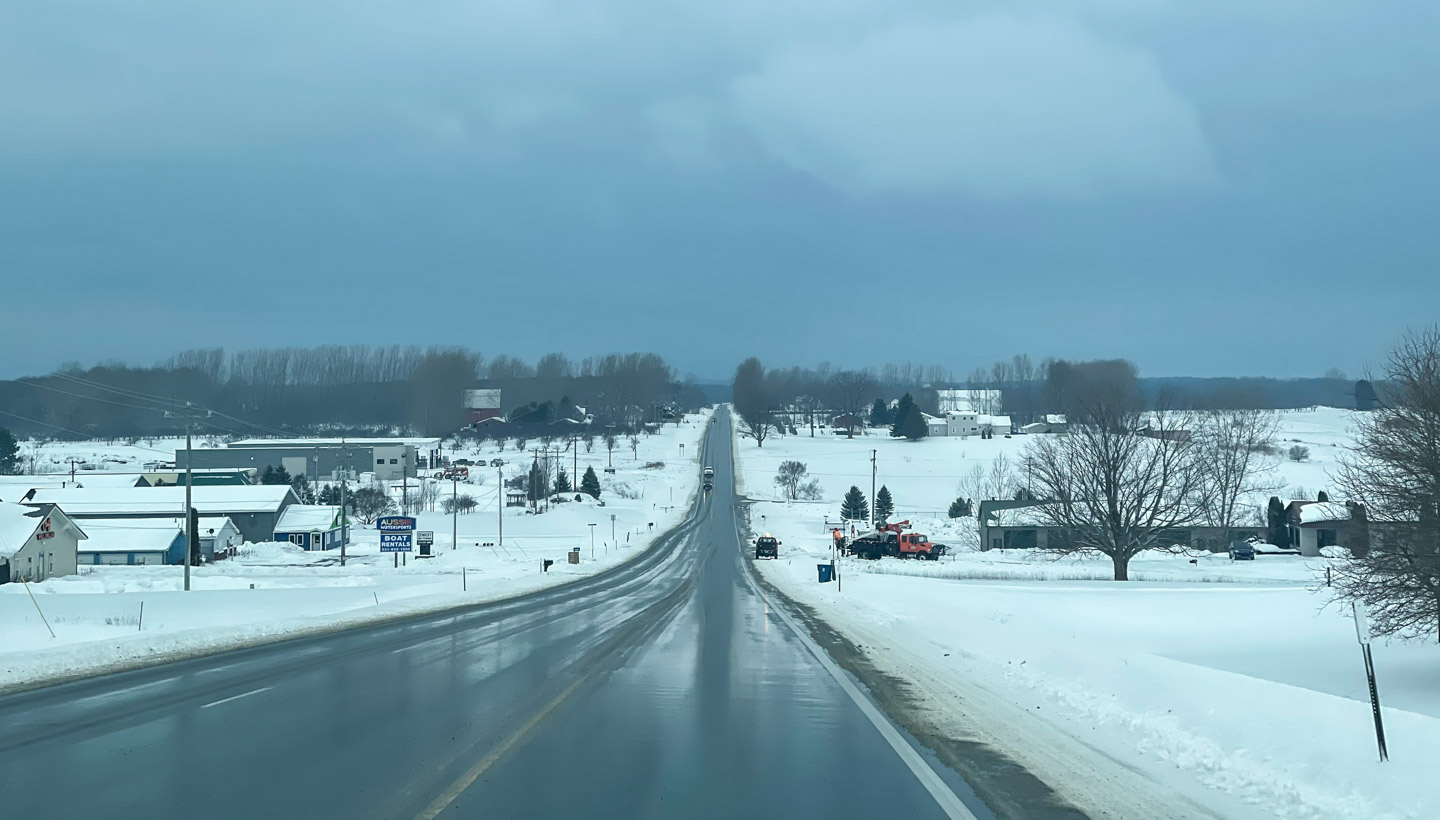 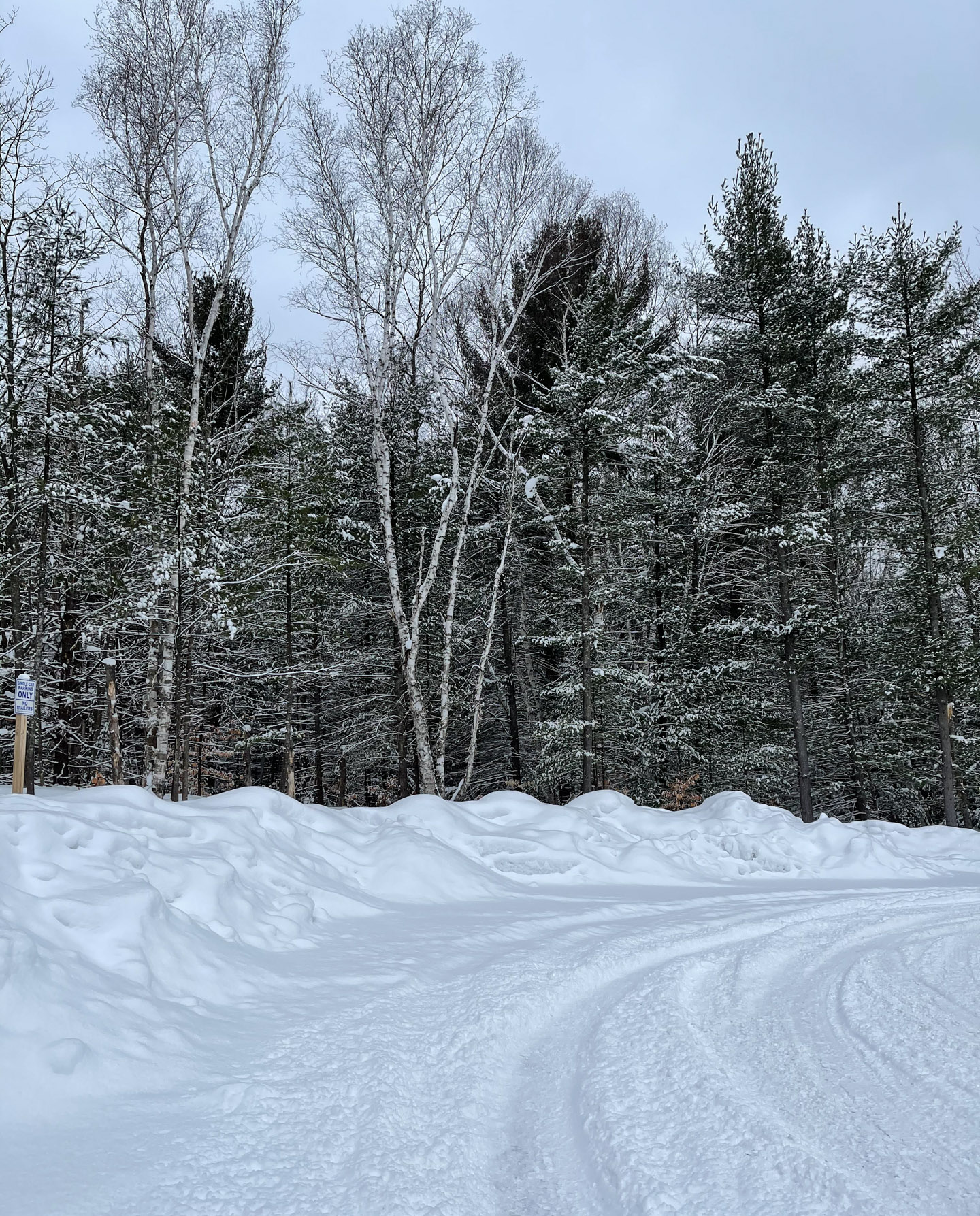 Strapping on a sports watch, I arrive at LAX during pre-dawn hours and find myself elated to once again hear mid-1990s pop music emanating from no particular place in the airport terminal. “This was a good idea,” I tell myself optimistically as I ponder the question of why I am so happy to visit a semi-frozen lake in Michigan to see diver’s watches… doing their thing. The plan is that of Seiko’s Eric Hofmann, who (together with fellow watch industry veteran Bob Brennan) oversees the brand’s increasingly important American commercial initiatives, adding an important perspective and energy to the vaunted brand’s leadership in Tokyo. Eric is a career “watch guy,” starting out at Bulova right out of college, and he represents a now-rare personality who combines a genuine love of timepieces, a deep understanding of the American wristwatch retail market, and an impressive love of the active lifestyle, which is often required to incubate desire for a professional-use timepiece. 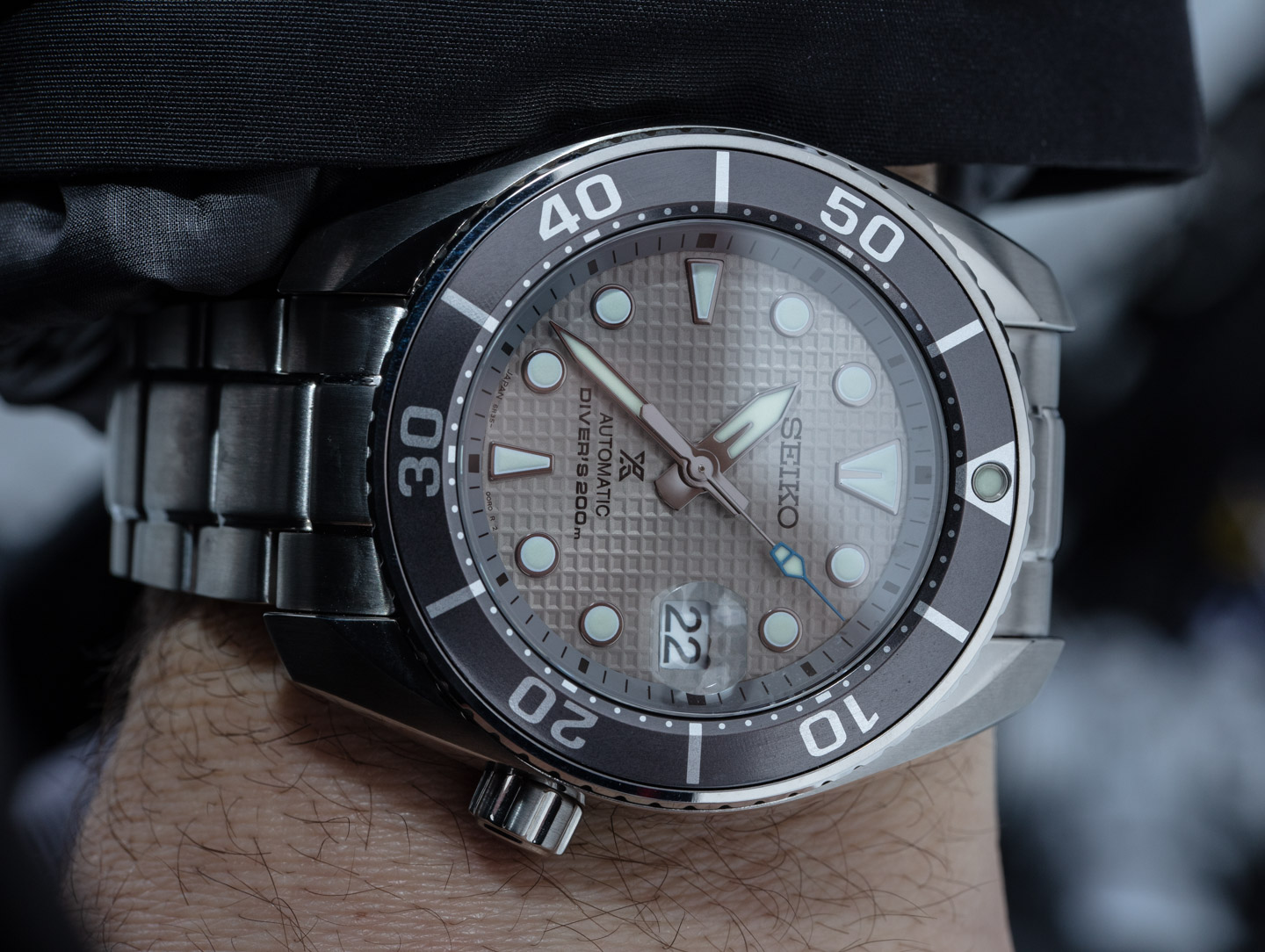 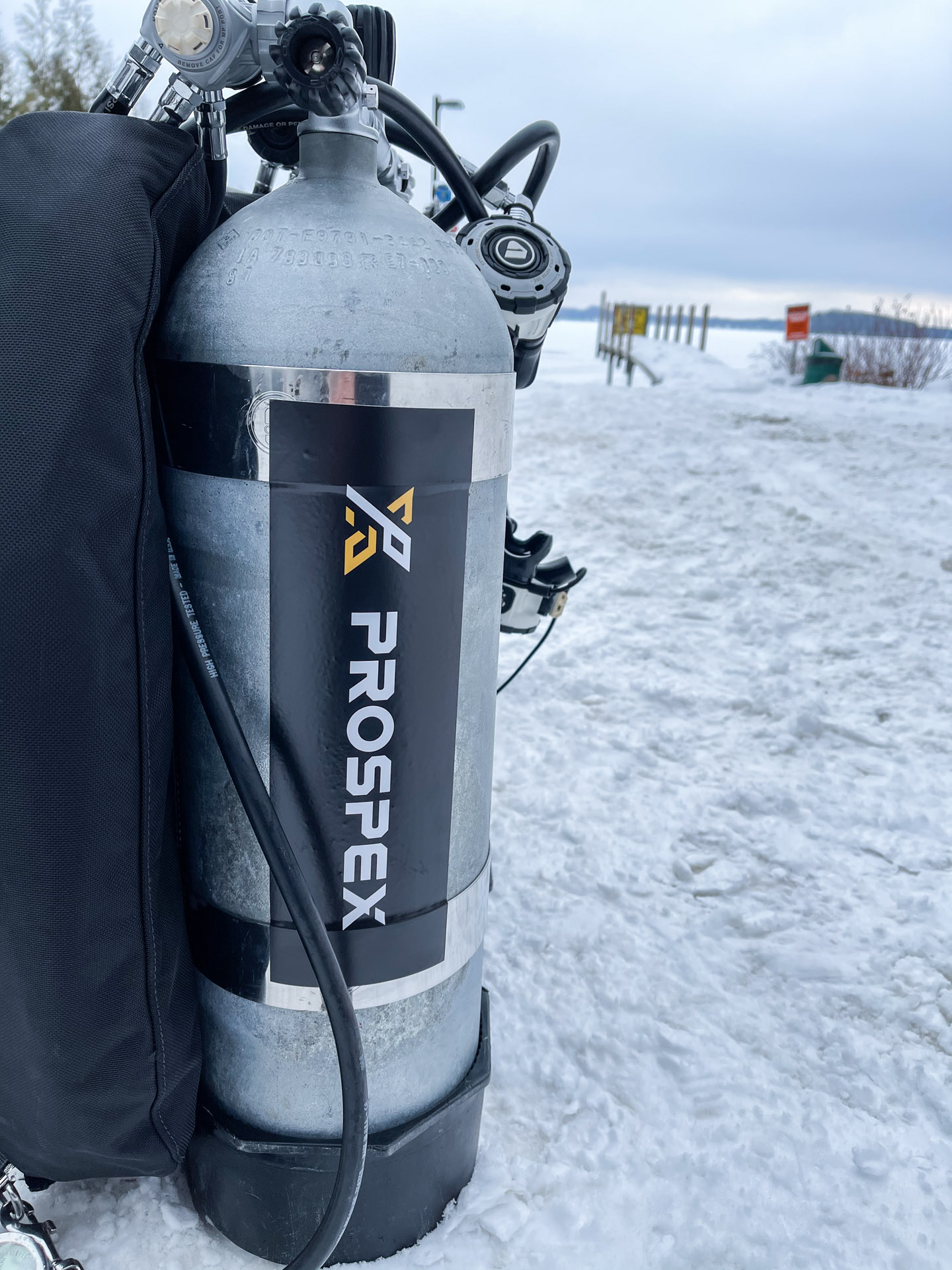 Eric laughs as I tote far too many warm gloves and thermal undergarments to a short jaunt more than halfway across the country to join an Emmy Award-winning National Geographic underwater video/photo team to take some slick shots of the Prospex Ice Diver collection in their intended environment. The exercise is hardly just for fun as the experience is an important part of Seiko’s ongoing efforts to impress upon its fans that its products walk-the-talk that timepiece enthusiast fans often afford the storied watchmaker.

For many people around the world, Seiko’s prolific family of dive watches is a thing of legend. While Seiko has been producing professional-use diving watches since the 1960s, it was really in the 1980s that Seiko diving watches became more mainstream and their modern designs and affordable price points made them healthy alternatives to more expensive (and often less fun) fare from Europe. Diving watches as a category today make up the most popular type of wristwatch sold — and the available selection of diver’s style watches on the market is mind-boggling in scope. Seiko’s products are more than competitive in most all aspects, but that isn’t enough anymore. Seiko’s Japanese and U.S. teams combine forces to first create new dive watches and then, second, to craft lifestyles around them. 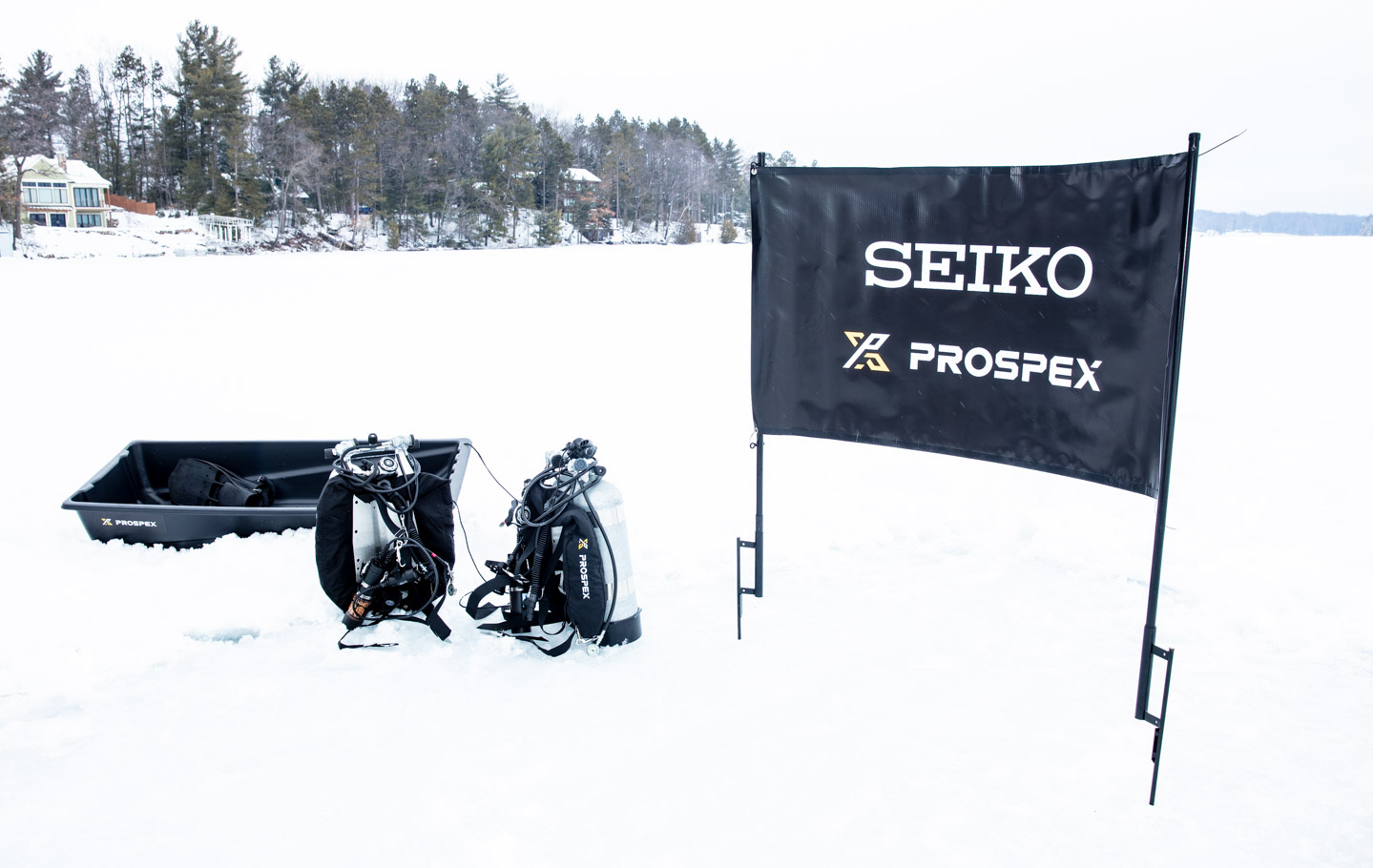 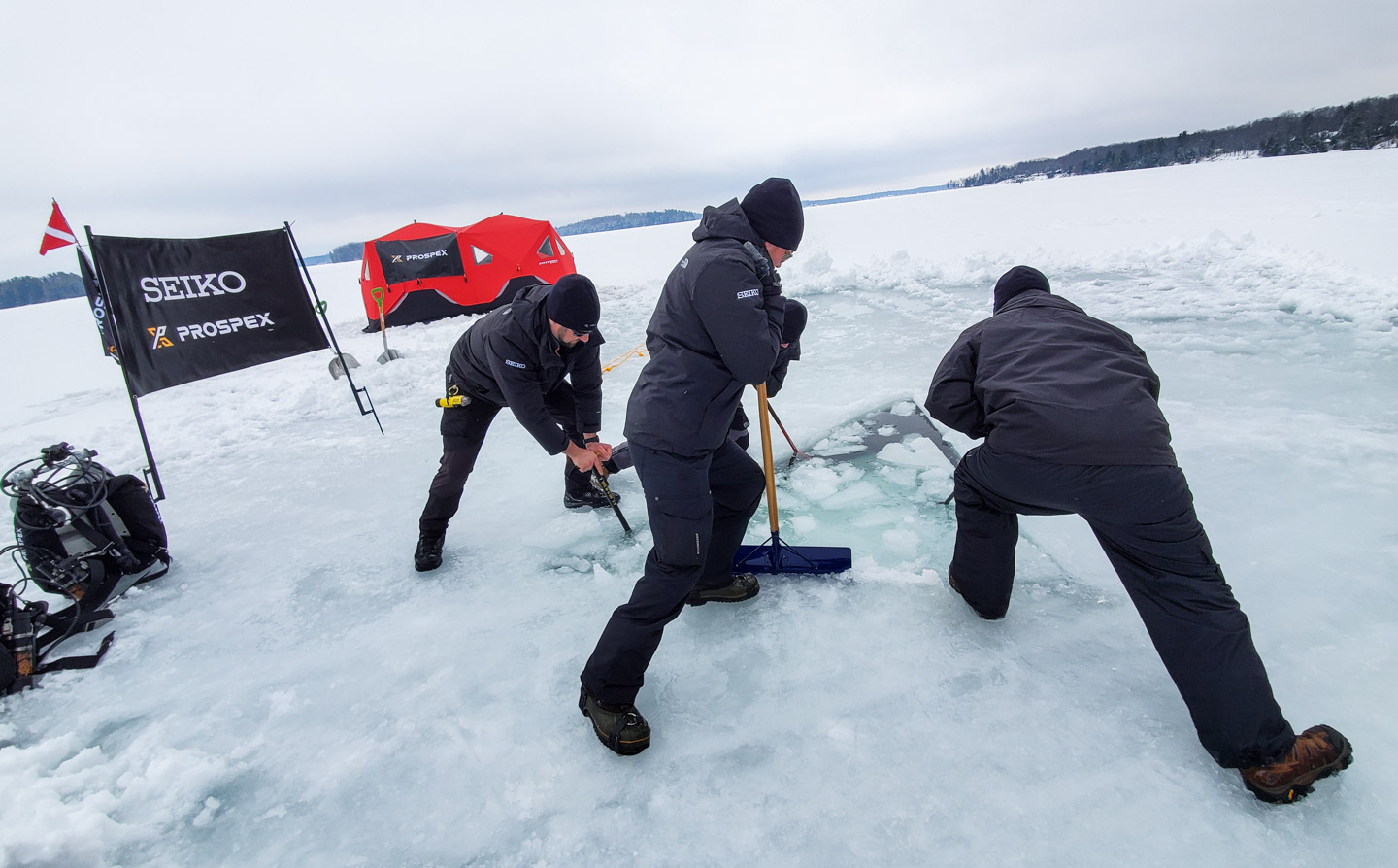 Seiko’s Hofmann is absolutely dedicated to proving to consumers everywhere that no matter how fashionable Seiko dive watches are, they are first and foremost real professional-use tools. This fact isn’t lost on most seasoned timepiece enthusiasts, but the youngest generation of watch collectors has grown up with the newly expanded proliferation of dive watch choices on the market. Seiko simply wants to reinforce to the timepiece community that its watches are designed for professional use and that professionals do, indeed, use their watches. Enter the Prospex Ice Diver into the clear and chilly depths of Lake Michigan and surrounding area lakes such as long Lake. 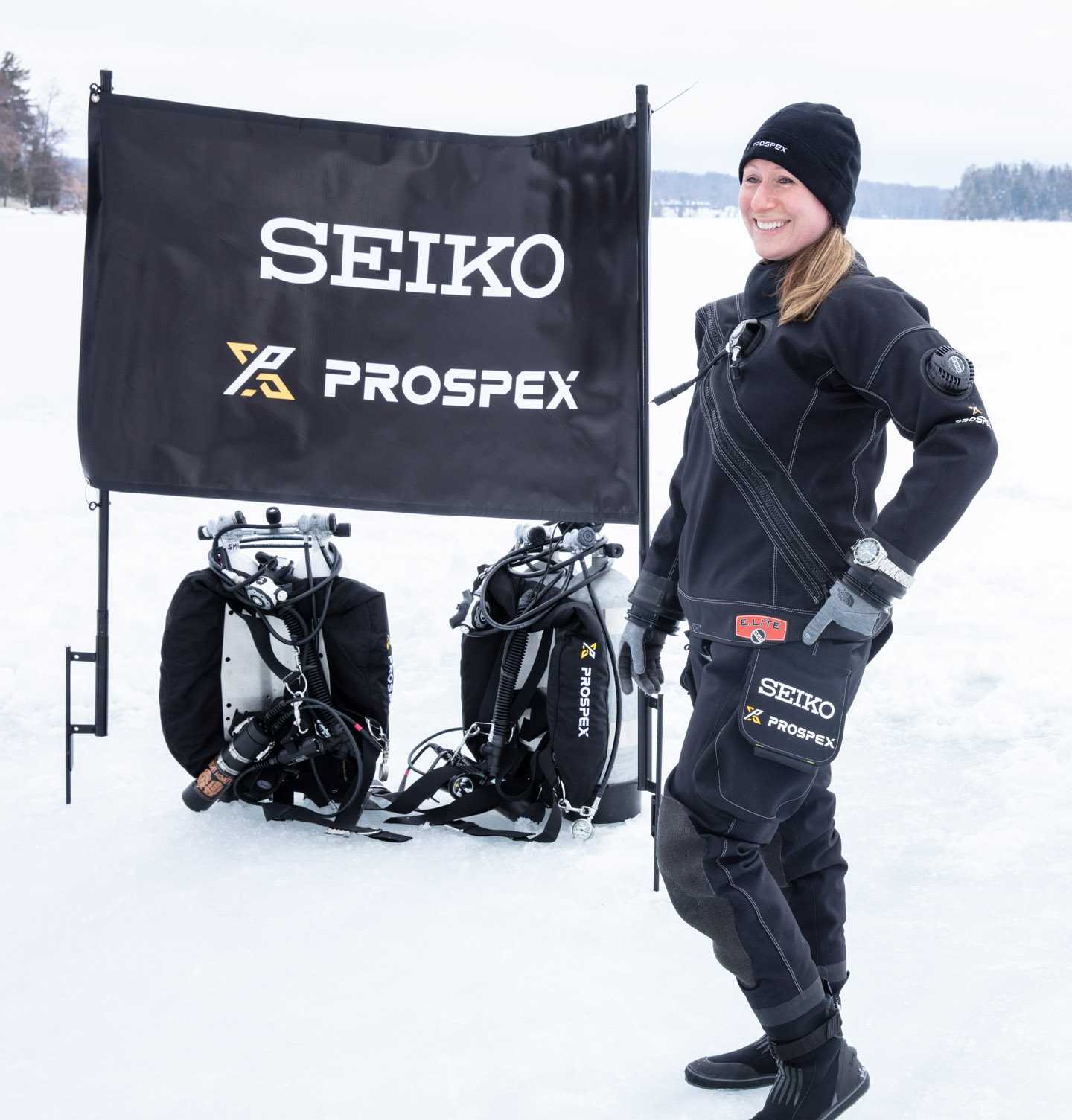 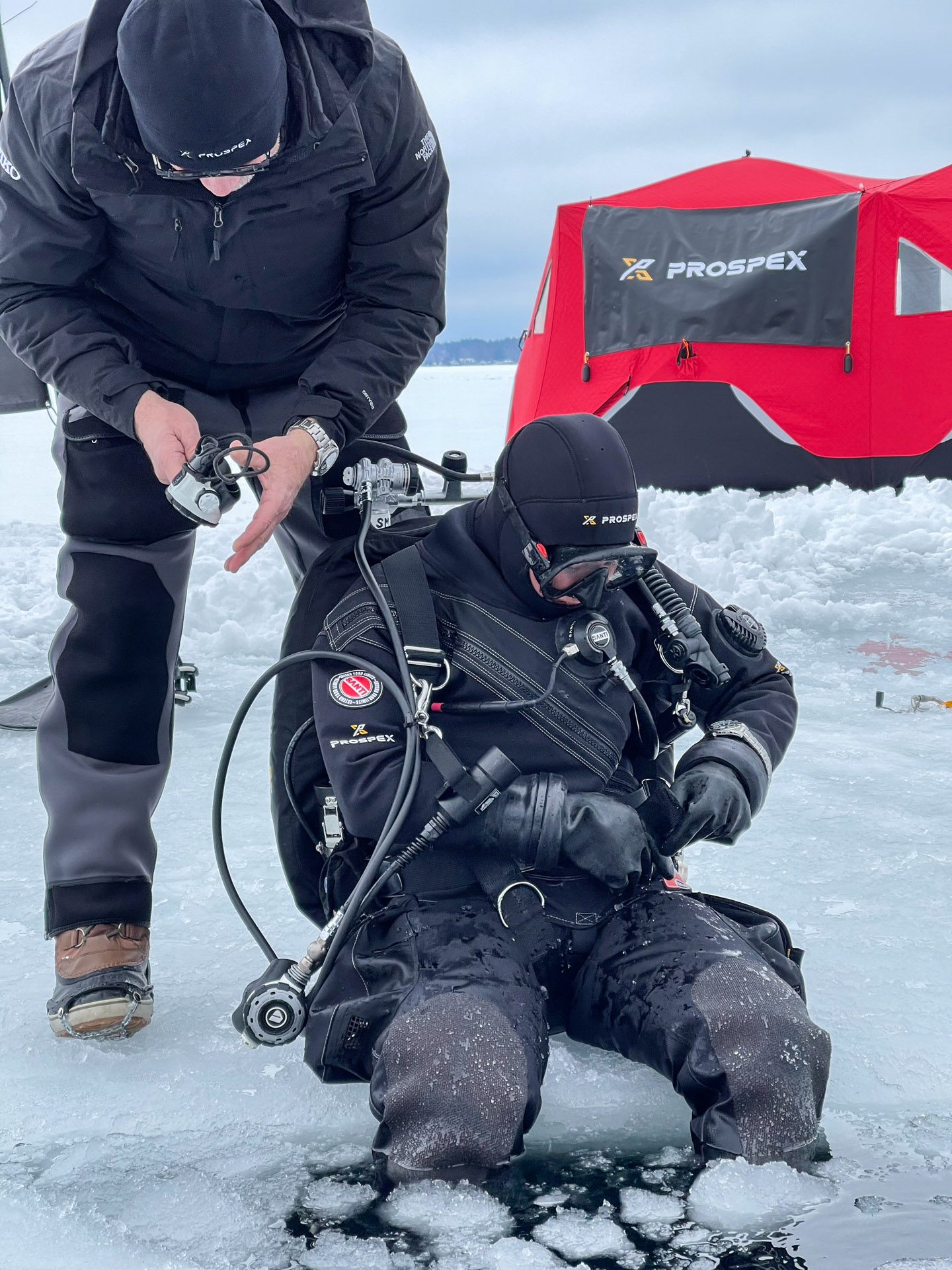 These Seiko Prospex dive shoots are part of a larger commitment with a company known as Liquid Productions and its founder, Becky Kagan Schott. With a journalism background, she is an expert photographer, as well as dangerous-water diving specialist. This includes capturing media in the world’s coldest waters, in shipwrecks, and in deep underwater cave systems. For this work, Becky and her team have earned numerous awards, including Emmys.

The Seiko Prospex Ice Diver (and other diving watch models) will benefit from being captured in their “natural habitat.” Seiko designers create these watches using visual inspiration from the natural world as much as from timekeeping instruments. It is one thing to suggest a timepiece is inspired by diving in waters under ice, it is another thing to actually test out and photograph the watches under a frozen lake surface. 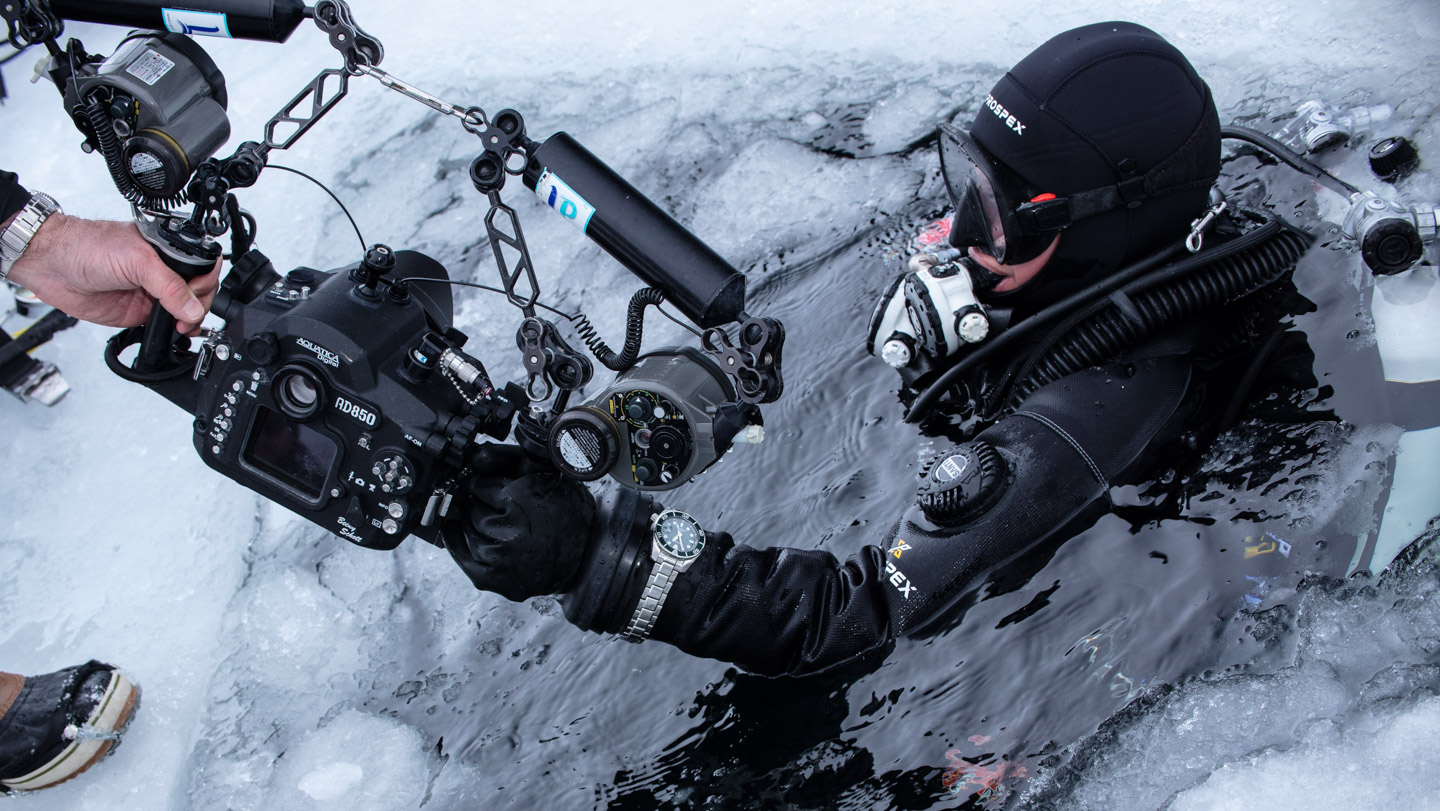 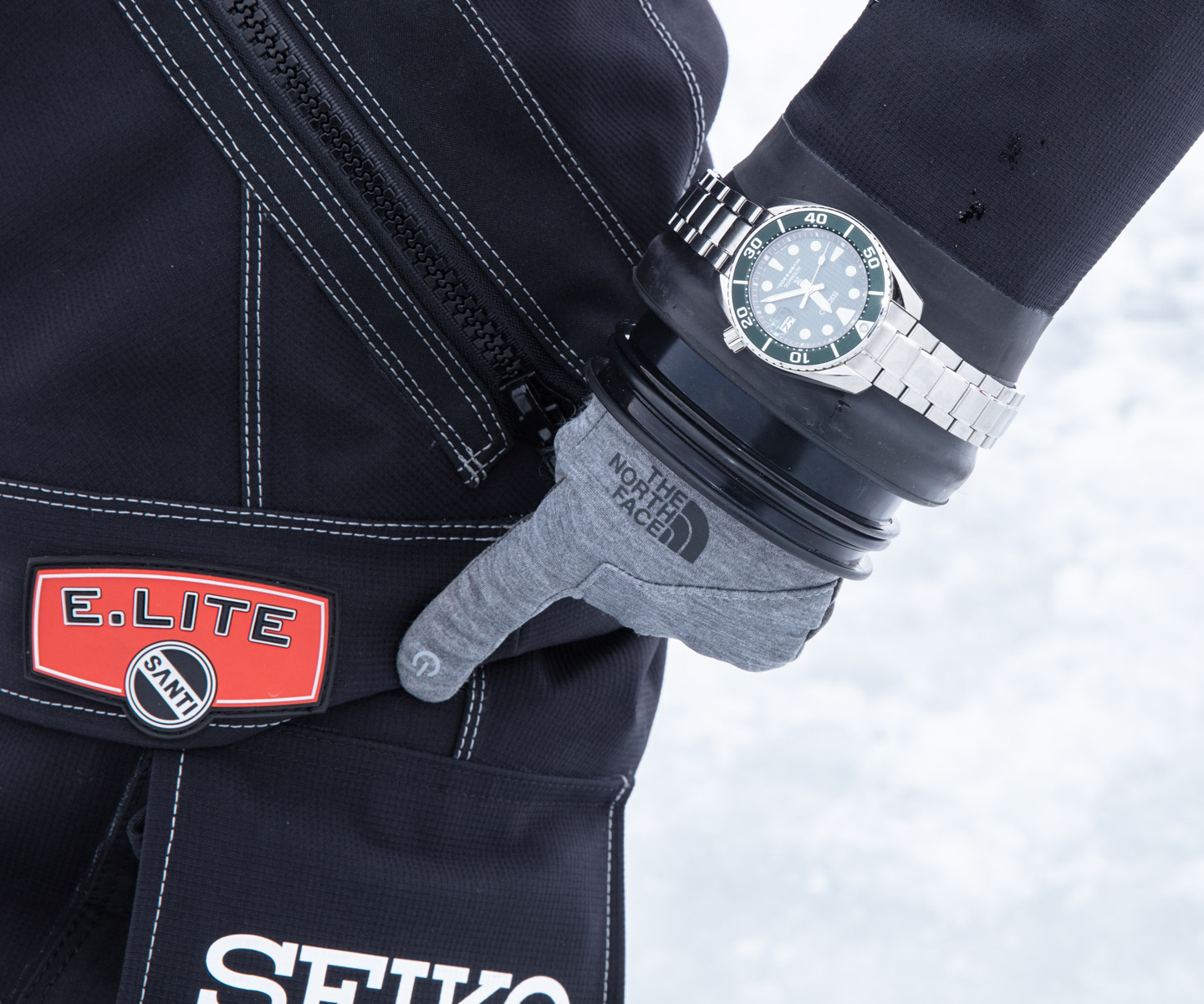 Give Seiko’s 50-plus-year history of making professional diving watches, its timepieces and branding naturally commingle with all matter of underwater gear. The most charming visual (for me) during the voyage to witness the ice diving shoot was seeing the many bracelet links added to the Becky’s Seiko watch in order for it to fit over her custom-made dry suit. It reminded me of the bracelet sizes for watches put on underwater submersibles that go deep underwater in order to sometimes test out their pressure resistance in real-world conditions. The second more entertaining image was probably for my colleagues, as I pulled my head out of 36-degree water after submerging it in there (with goggles) to get a look around (I and just one other person tried that).

Cold water diving can’t safely be done without a dry suit and warming system. Even then divers can only remain in frigid waters for so long before the cold becomes unbearable. I was told that while underwater, one must simply “endure” the first few minutes of your face nerves tingling in pain, before your entire face goes numb. Minor water leaks into one’s suit or glove can happen even with a dry suit, and the presence of cold water immediately on your skin can cause even more problems. 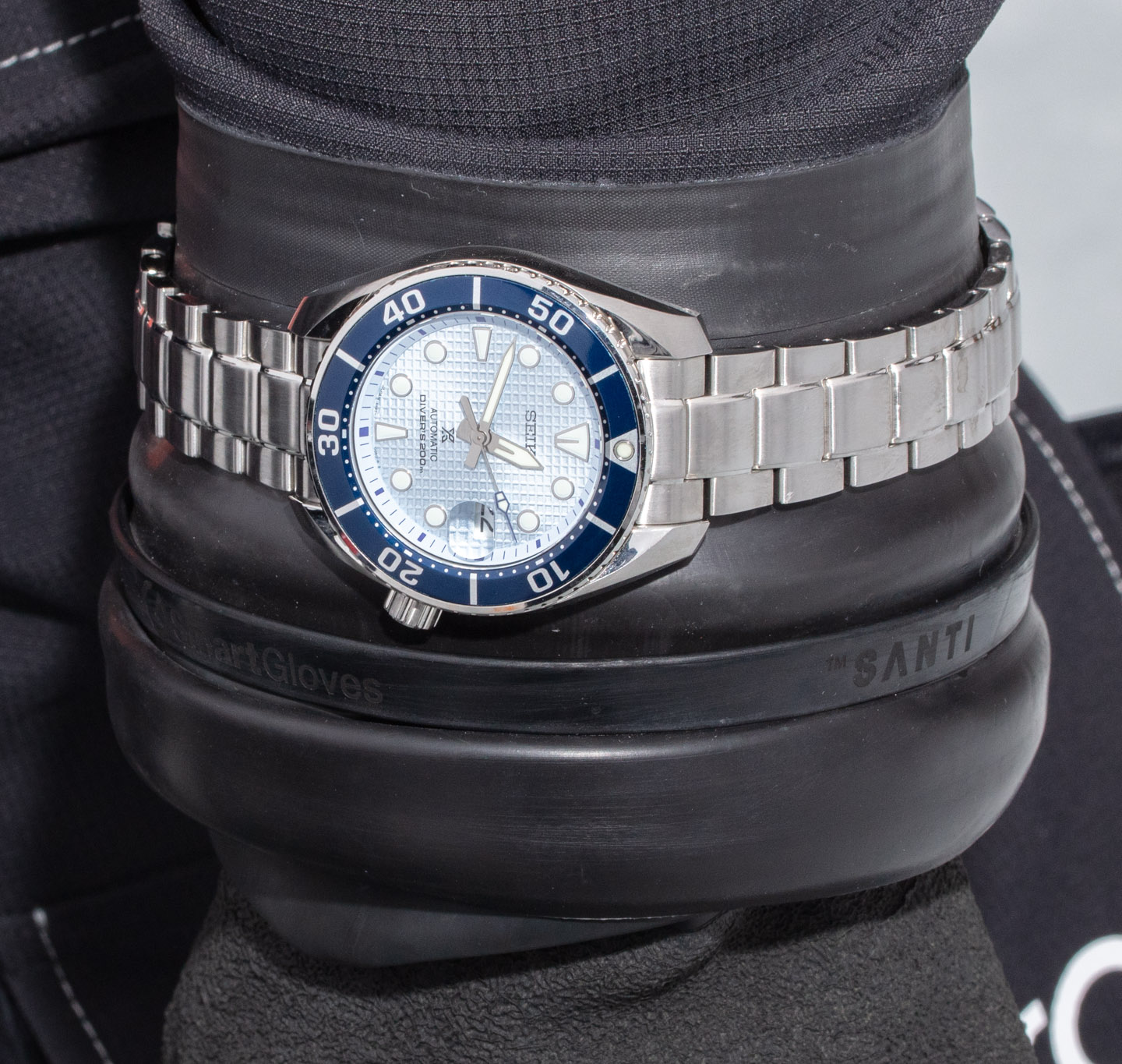 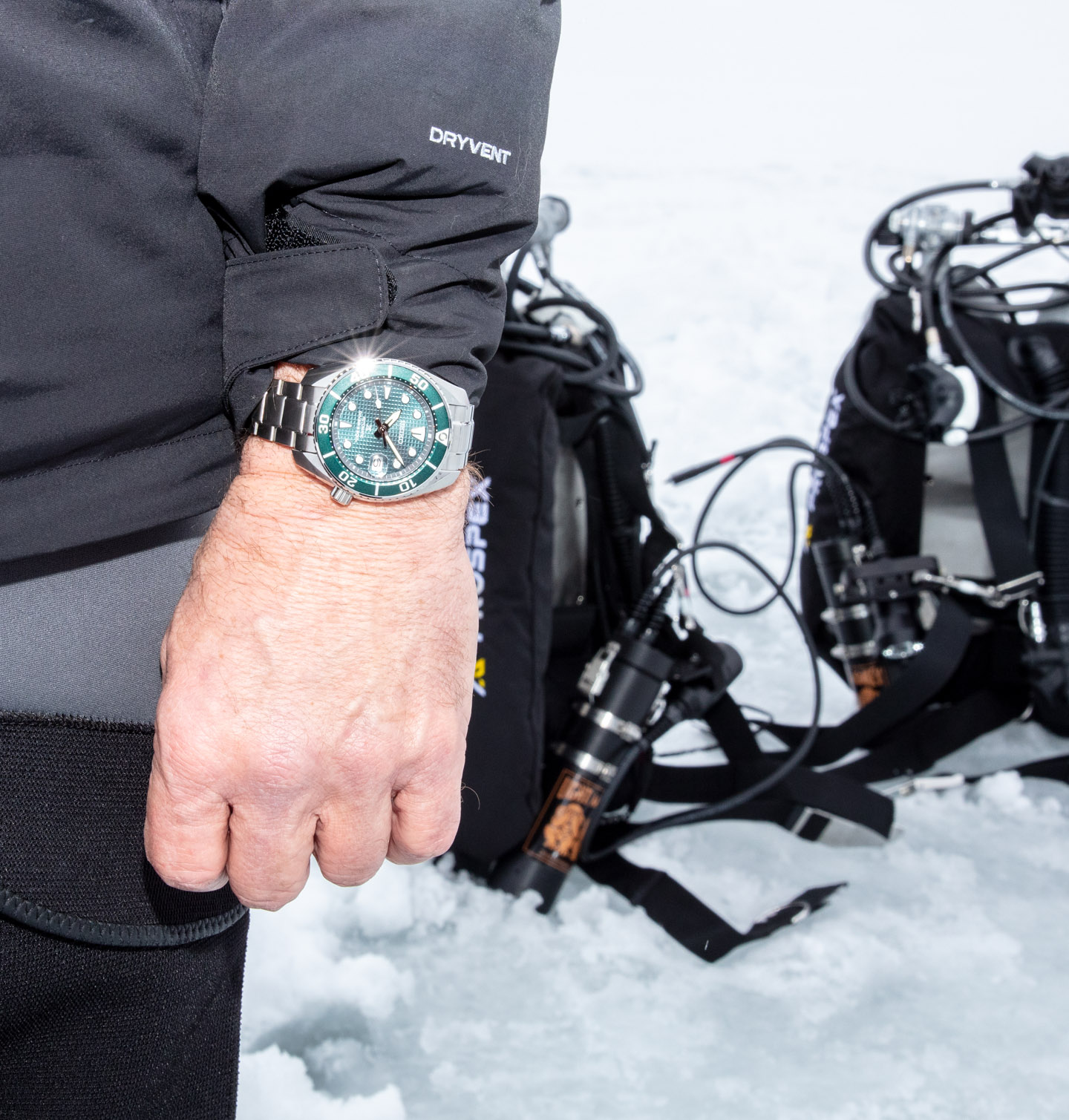 Diving under ice presents additional problems. To enter Long Lake in Michigan, the team had to saw a hole through a foot of ice, and then slide that cut segment under the ice (only to be later slid back into place for it to re-freeze). Once under water, the only ability to resurface is via a small exit above – which in many instances can be easy to disorientate one’s self away from. An attached tether is the safety mechanism many diver’s need in order to feel and pull their way back to the narrow portal cut through the otherwise impregnable frozen barrier to oxygen.

Despite the proliferation of diving computers, traditional analog diver’s watches are still popular with diving enthusiast populations who aren’t also in the “watch enthusiast” demographic. A large contingent of divers use traditional timepieces as a backup device, or even as their sole diving timer when in water no deeper than 30 feet or so. Seiko is deeply intertwined with the world of diving even today — enjoying a long-term relationship with PADI (as the official watchmaker), as well as being world’s most popular diving-style watch at a range of price points. 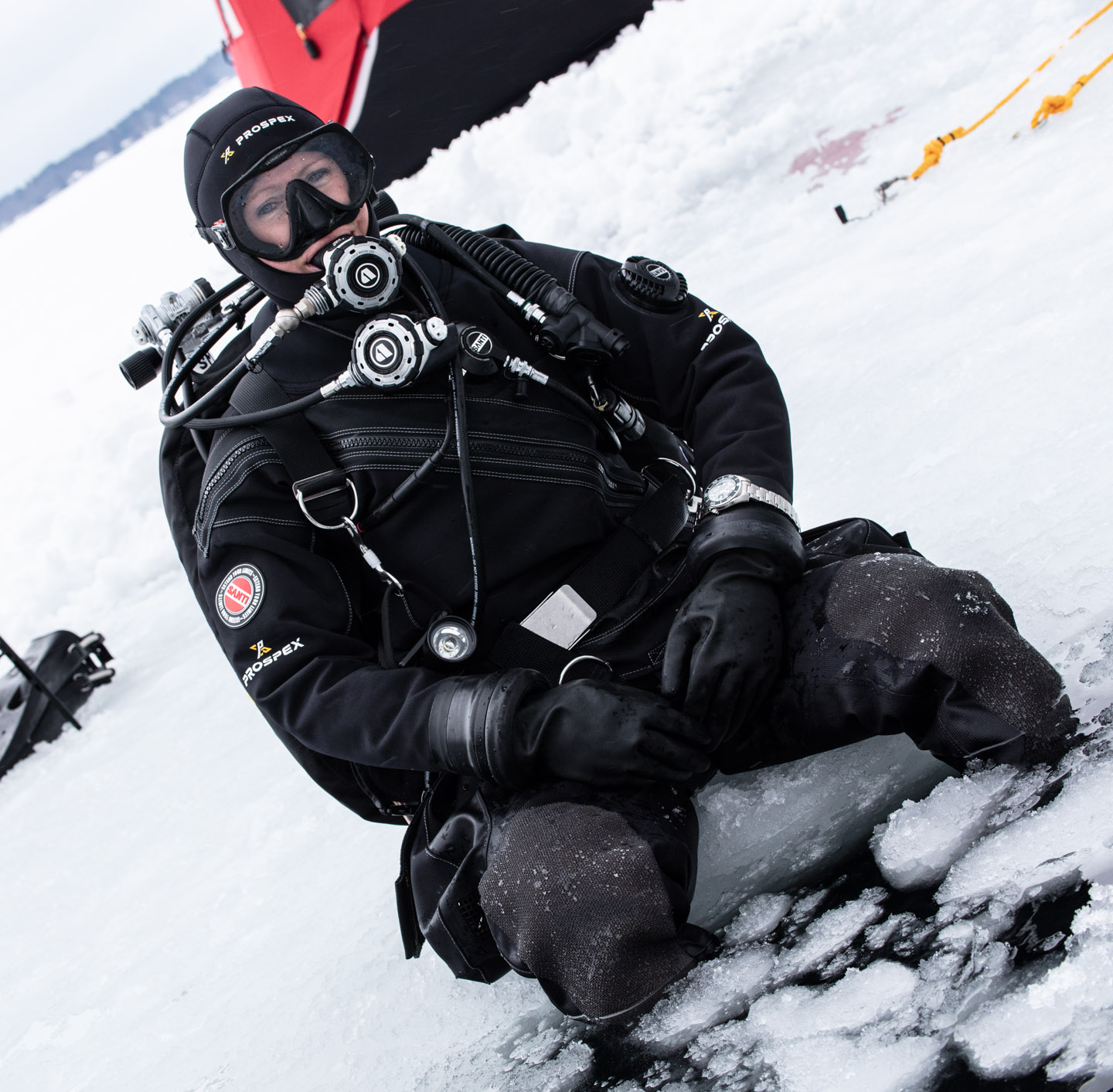 In an era in which diver’s watches are more common than ever before, Seiko continues to standout because as the mountain of alternatives grows, it just pushes Seiko up even higher. Seiko’s important task now is to simply reinforce to the market (what Seiko enthusiasts already know) that Seiko makes a professional-choice diver’s watch, that is rich in stylistic variety, and has the classic good looks that consumers demand.

The next part of this story will come as aBlogtoWatch introduces some of the photography produced by Kagan Schott and her team — with Seiko diver’s watches against some of the most dramatic underwater backdrops they can discover. Learn more at the Seiko watches website here.