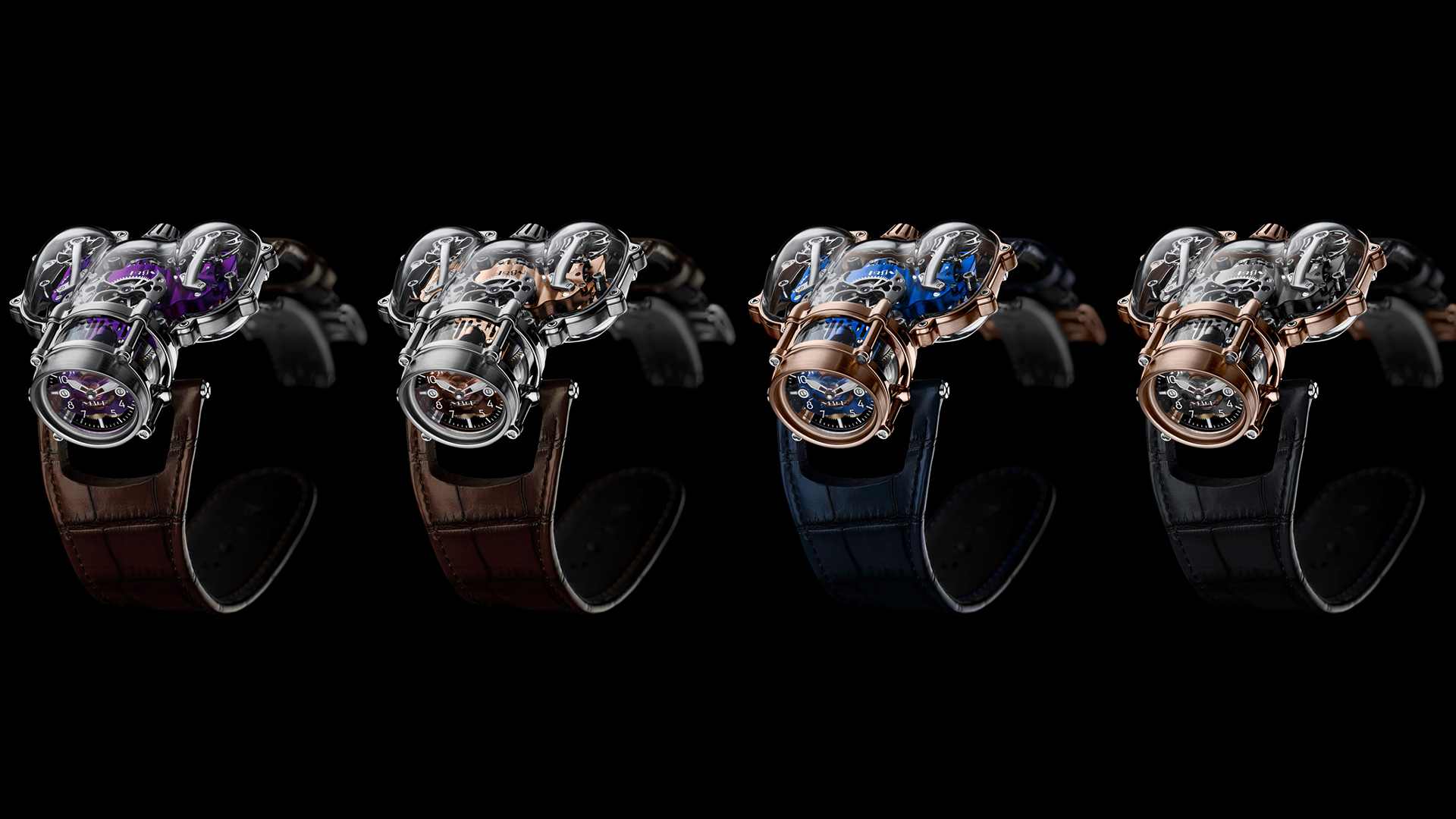 Daring haute horlogerie brand MB&F has become an enthusiast favorite over its relatively young history, both for its outside-the-box movement designs and its continuing efforts to blur the line between watchmaking and modern sculpture. One of the brand’s most extreme examples of this philosophy in recent years is the Horological Machine No. 9 “Flow,” or HM9. Designed to evoke the sleek Streamline Moderne forms of the ‘30s and ‘40s, the aerodynamic “triple teardrop” form of the HM9 also contains what MB&F founder Maximilian Büsser claims is the brand’s most beautiful movement to date. To celebrate this intricate work of design, MB&F has returned to the HM9 with a new interpretation designed to shine a spotlight directly on this movement. The new limited edition MB&F Horological Machine No. 9 Sapphire Vision, or MB&F HM9-SV, reimagines one of the brand’s sleekest forms with a dazzlingly complex sapphire case. 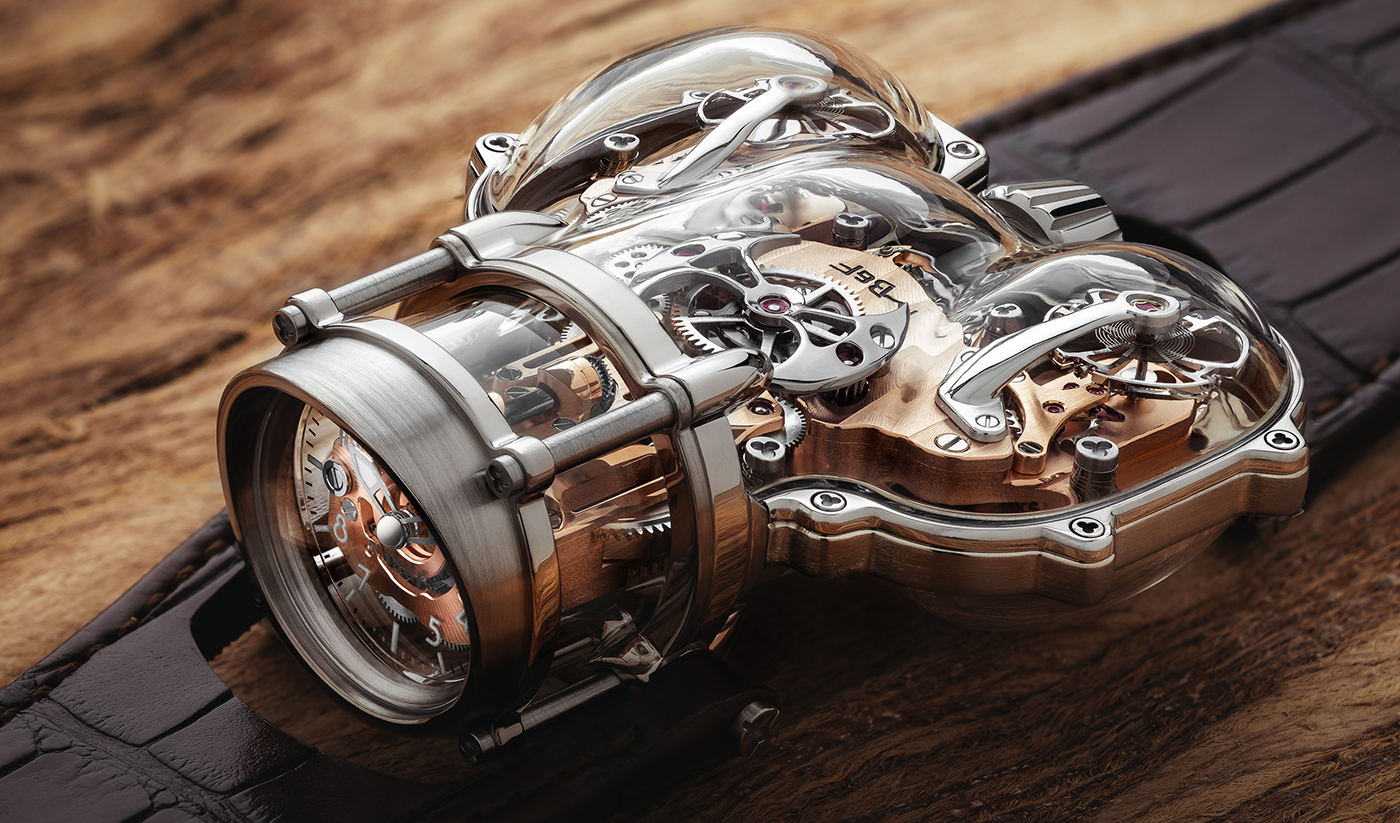 The 57mm by 47mm by 23mm case of the limited edition MB&F HM9-SV is likely one of the most ambitious sapphire cases ever attempted, with a total of five anti-reflective sapphire pieces each with a unique shape. The largest pieces, the two covering the top and bottom of the main case body, are incredibly complex forms, featuring three distinct teardrop shaped domes each in addition to their unusual outlines. A connecting cylindrical piece mates this main case to the side-mounted dial, which sports both a top crystal and a sapphire crystal dial surface. The brand claims that machining and polishing a set of crystals for each HM9-SV involves 350 hours of work by hand, not including mounting to the overall structure itself. Holding all these pieces together is a skeleton framework of either 18K white or red gold, allowing for a nearly uninterrupted view of the movement within but adding a few sculptural touches to the design. The switch to a primarily sapphire case appears in images to have altered the proportions of the case slightly from the original HM9, with a slightly more bulbous, organic impression than its predecessor. 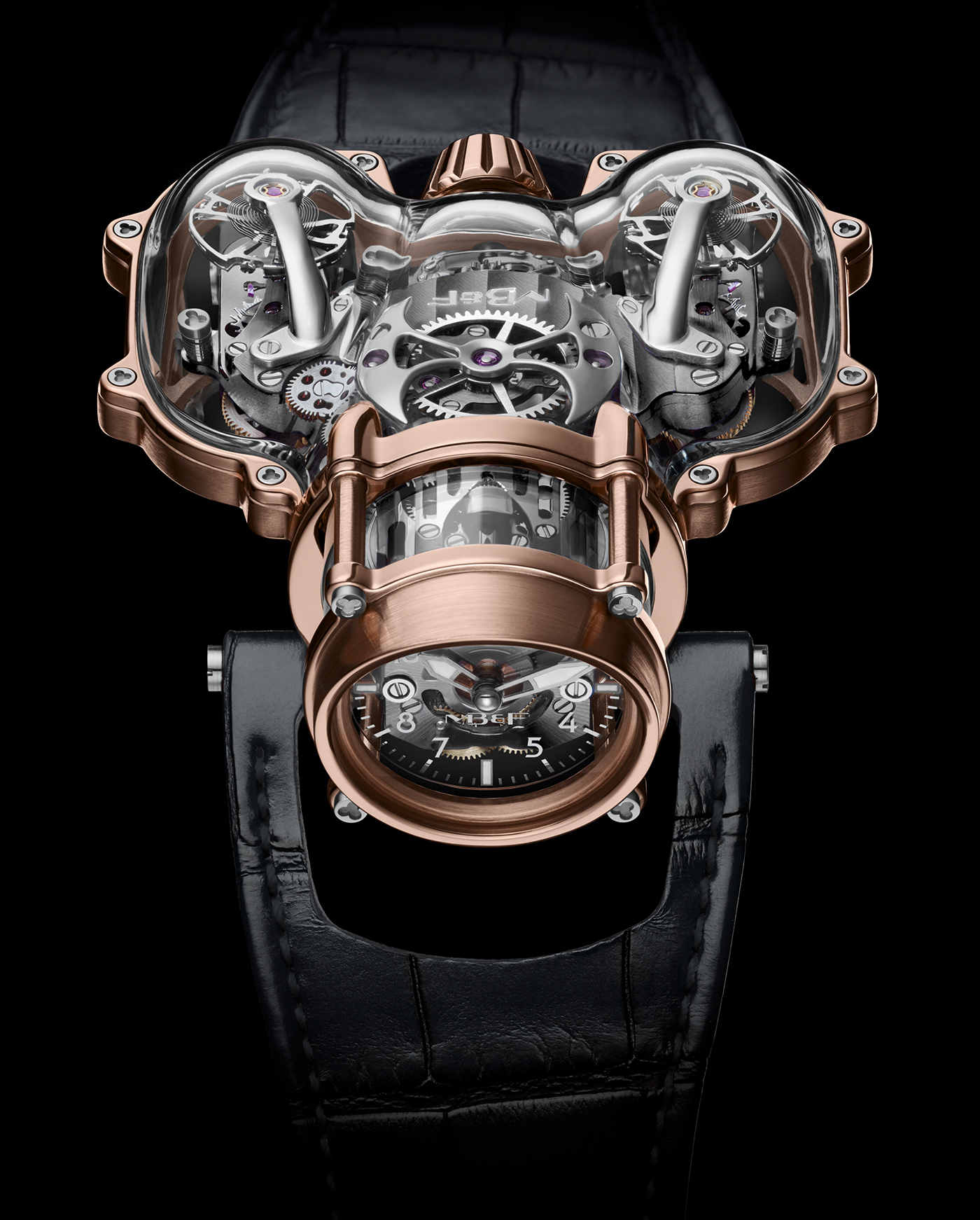 The dial of the MB&F HM9-SV, located on the 6 o’clock side of the case, follows the pilot inspired example of the original HM9 Flow Air. Equipped with bold printed Arabic numerals and skeleton Roman sword hands, the dial surface itself is sapphire crystal to ensure an unimpeded view of the gear train below. 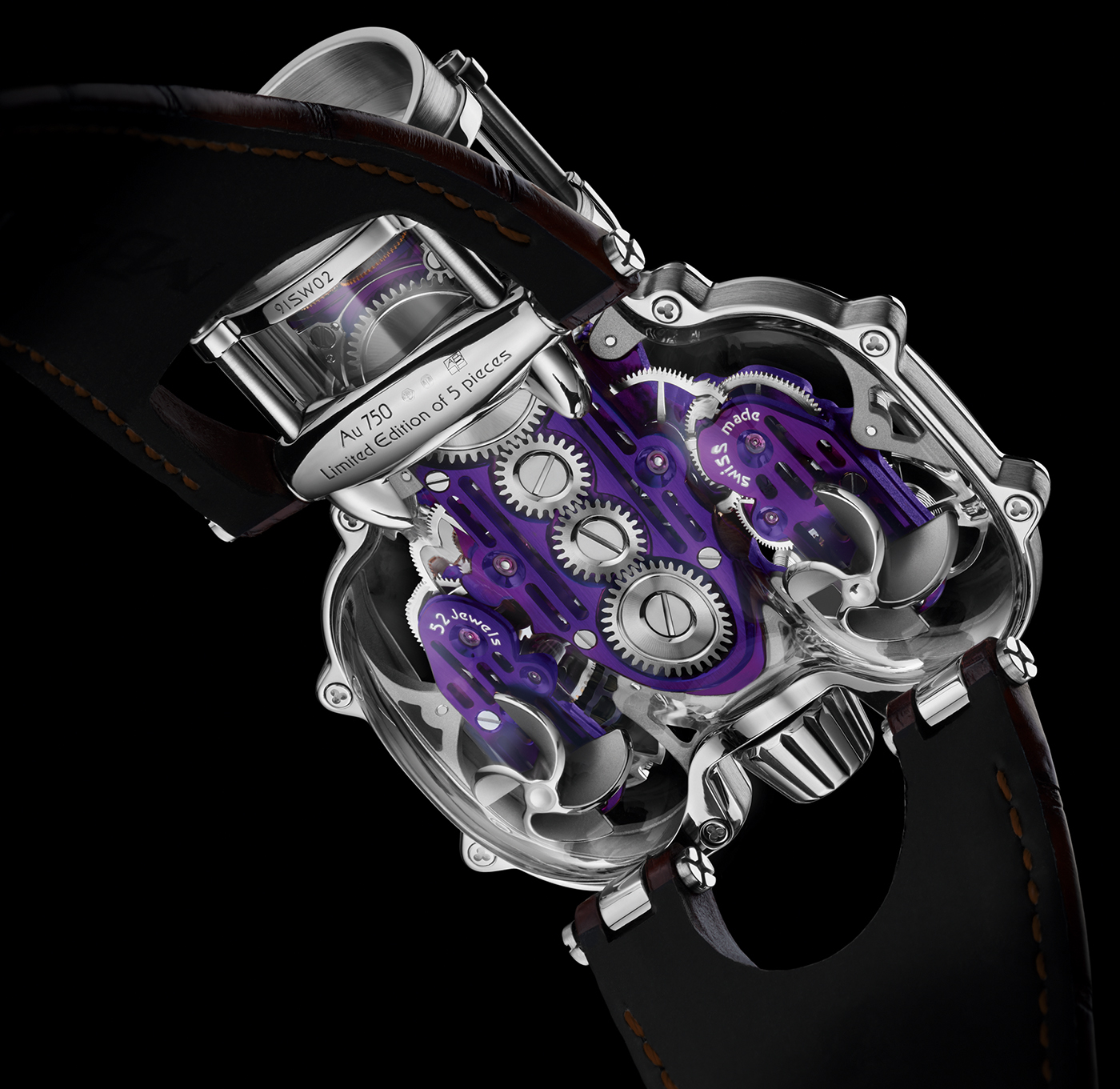 MB&F offers the in-house HM9 handwound movement inside the HM9-SV in four distinct finishes, with red gold cased models featuring plates and bridges finished in NAC coated black or PVD coated blue, while white gold variants receive either PVD coated purple or 18K rose gold plating. The addition of color, particularly the vibrant jewel tones of the blue and purple variants, adds to the otherworldly effect of the design dramatically. Interestingly, while the HM9 movement sports a pair of balance wheels, one on each of the pontoons flanking the main cylindrical body, MB&F deliberately avoids setting up a resonance effect. The movement instead uses a planetary differential system to equalize and combine the rate of the pair. Further complicating matters is the single mainspring barrel, which splits power between both balances before output is recombined and sent to the hands. This also makes the HM9 movement impossible to regulate by standard means as the two balances produce two distinct oscillations, but the brand has developed a proprietary technique specifically for regulating this movement. Performance for this complex powerplant stands at 45 hours of power reserve at an 18,000 bph beat rate. 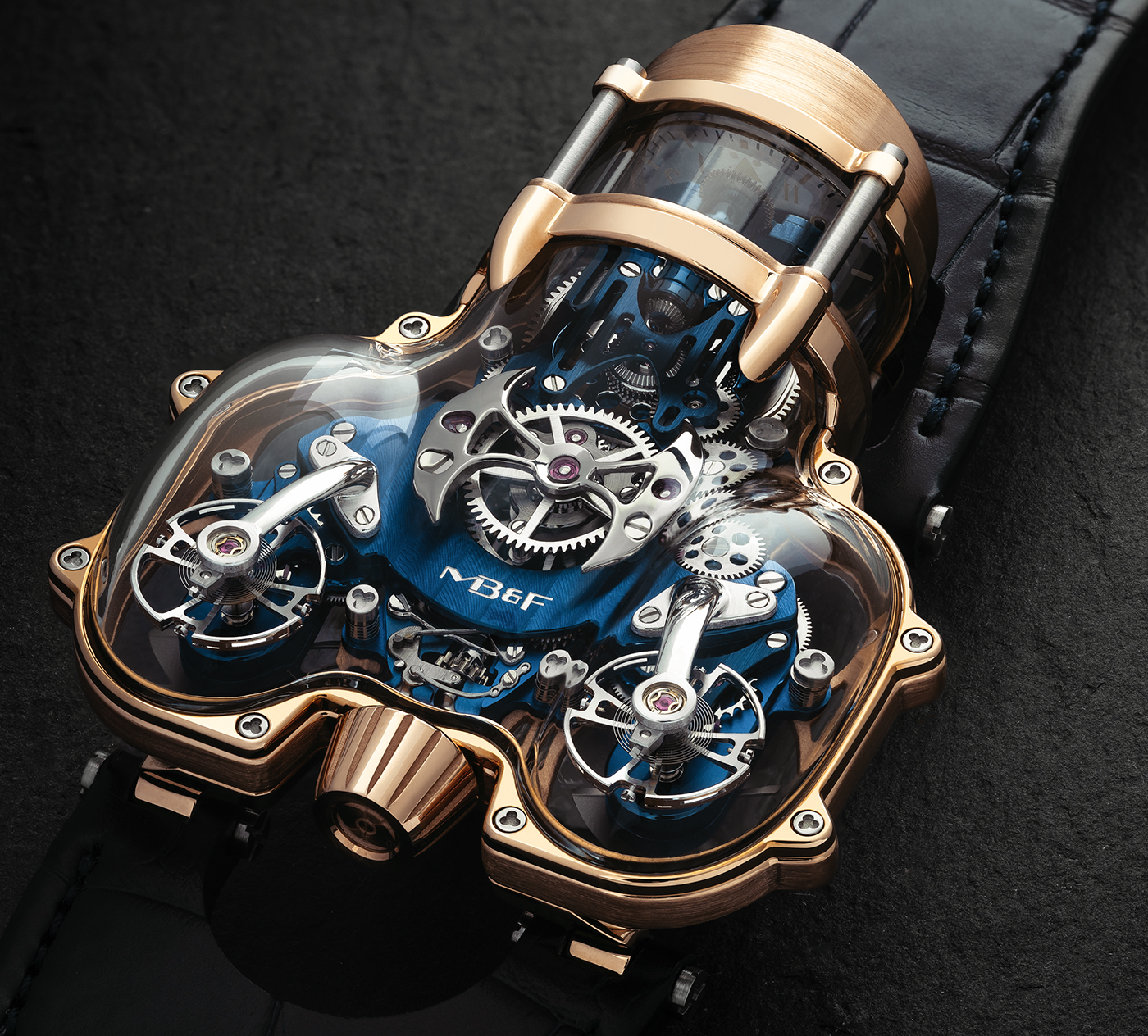 To complete the spectacular look of the HM9-SV, MB&F pairs each colorway with a sharply tapering hand stitched alligator leather strap. Both white gold cased models receive a strap in deep, warm mahogany brown, while the PVD blue movement is paired with a navy blue example. The PVD black movement version, perhaps the most conservative of the line, is paired with clean and simple black. 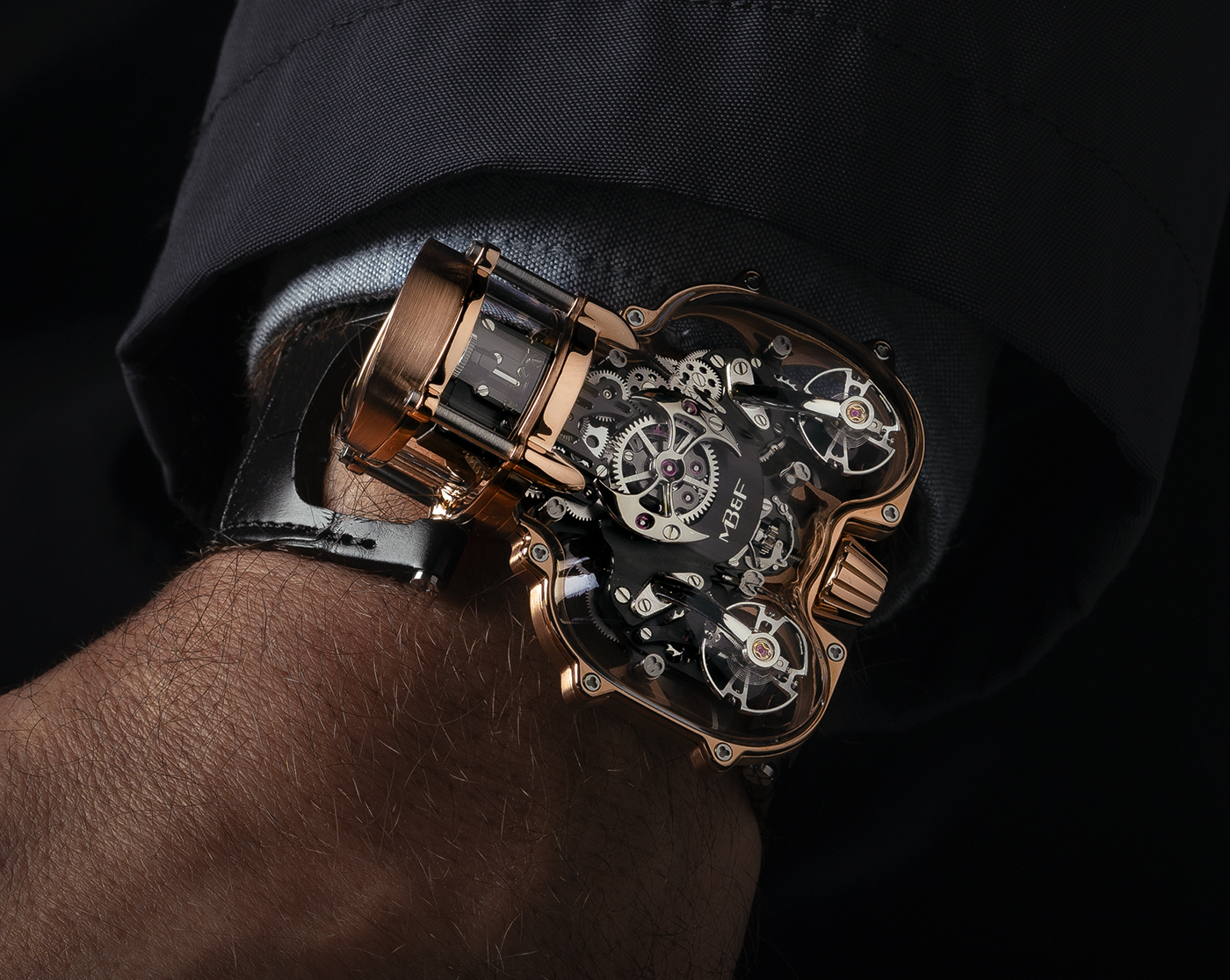 Combining one of the brand’s most striking movements with one of the most ambitious and labor intensive cases ever fitted to a wristwatch, there’s no denying the sheer mechanical pageantry of the limited edition MB&F HM9-SV. Only five examples will be produced in each colorway. The MB&F HM9-SV is available for order now through authorized dealers at an MSRP of $440,000. To learn more, please visit the brand’s website.