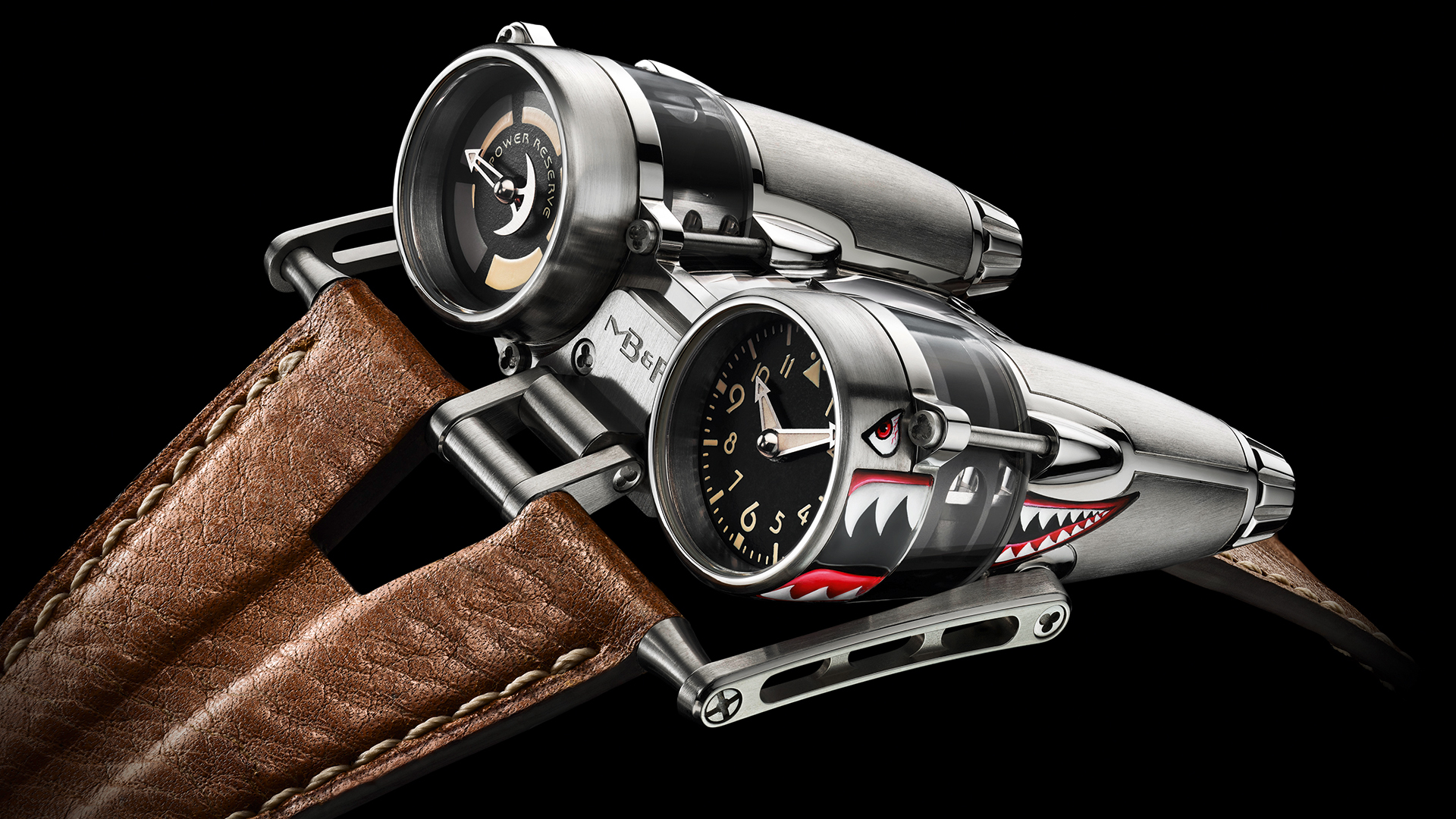 MB&F Announces One Of A Kind HM4 Kittyhawk Watch

Over its relatively short history, MB&F has built a sterling reputation among enthusiasts for both its innovative movement work and its audacious unorthodox designs. While its more recent designs have trended towards retro-futuristic expressionism and diverse inspirations from classic cars to bulldogs, much of the groundwork of this philosophy can be traced back to the HM4 series introduced in 2010. Although the HM4 series has long since been sold out and retired, echoes of its influence can be felt throughout MB&F’s current product line. To honor this lasting influence, the brand has modified the original prototype of the aviation instrument inspired watch into a unique Streamline Moderne masterpiece with a WWII fighter plane flair. Taking inspiration from the P-40 Kittyhawk (also known as the Warhawk or Tomahawk) fighter aircraft, the one of a kind MB&F HM4 Kittyhawk adds a graphic, aggressive punch to one of the brand’s most coveted early models. 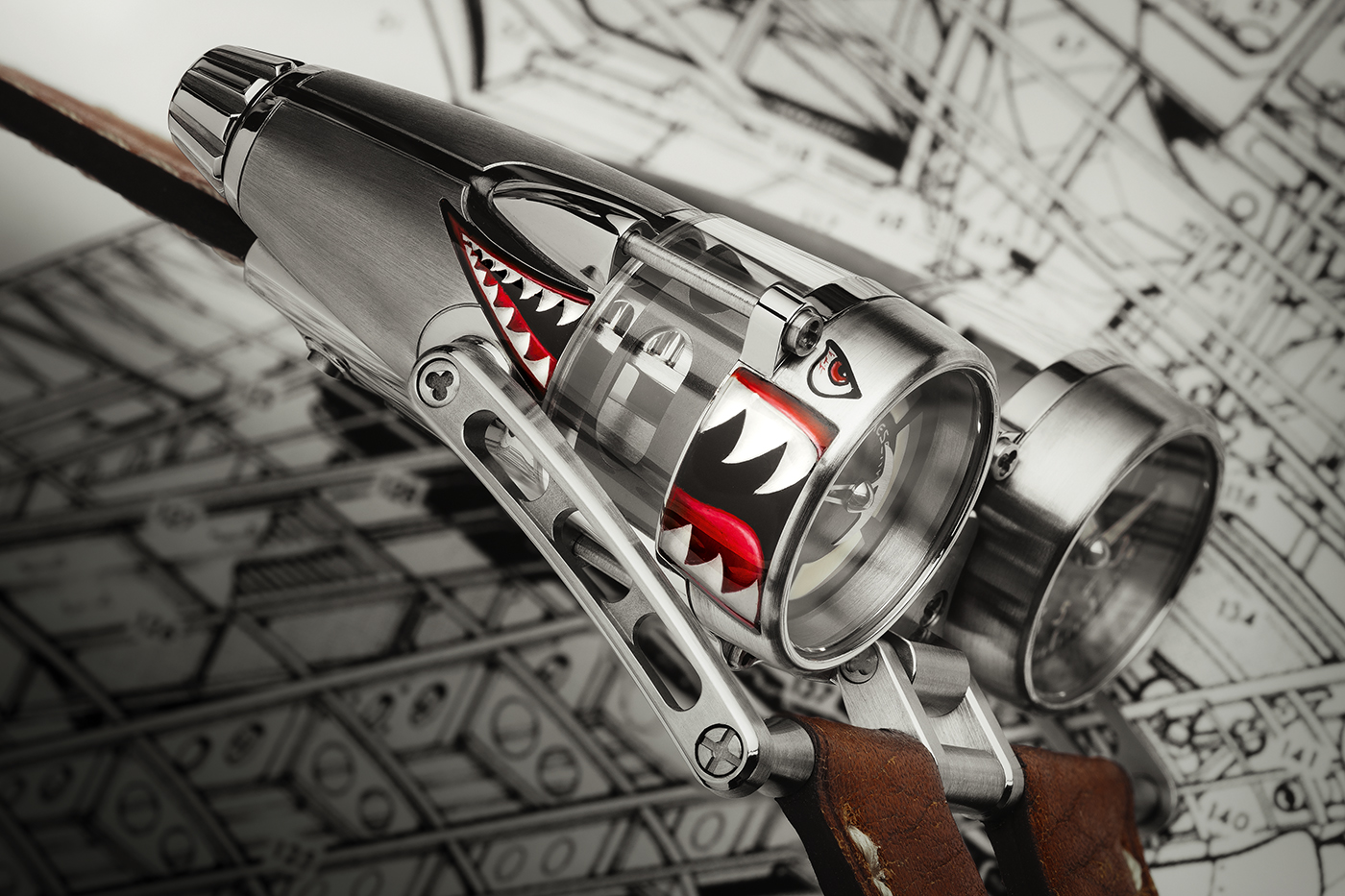 The 52mm by 54mm titanium twin nacelle case shape of the MB&F HM4 Kittyhawk is as unusual and striking today as it was in its original 2010 appearance, towering on the wrist at a full 24mm thick. The major difference to previous models comes long the case sides, where the vibrant and aggressive shark mouth motif made famous by the P-40 Kittyhawk fighter plane is hand-painted by acclaimed miniature painter Isabelle Villa. This is not the first time an HM4 case has been painted with WWII inspired nose art, as both the HM4 Razzle Dazzle and HM4 Double Trouble limited editions from 2011 featured similar motifs, but the execution on the HM4 Kittyhawk goes far beyond a simple coat of paint. The HM4 Kittyhawk abandons the raised rivet design of its predecessors in favor of a smooth and streamlined look, and in order to maximize this slippery effect the painted areas of the case are slightly recessed. The paint sits perfectly flush with the rest of the case surface, and in order to achieve this effect MB&F hand shaves minute layers of metal from the areas to be painted, at a depth of a few microns. To complete the sleek look and protect this detailed painting, MB&F finishes the process with a layer of clear varnish over the entire case body. 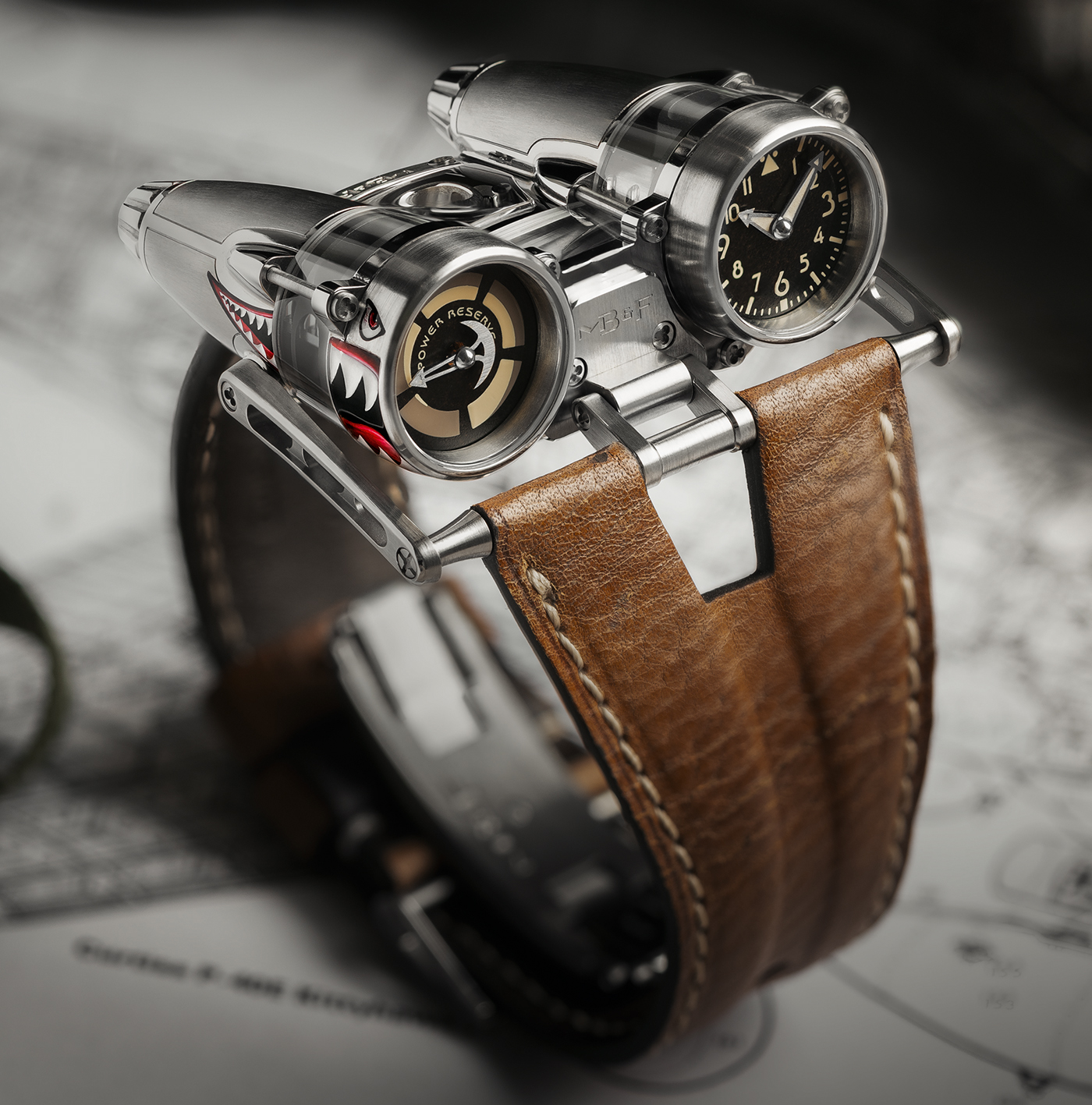 While the twin dial layout of the MB&F HM4 has taken on several guises over the years, the HM4 Kittyhawk cleaves close to the vintage inspired interpretation of the HM4 Razzle Dazzle and HM4 Double Trouble. The right hand dial handles timekeeping, with a flieger style set of printed Arabic numerals in khaki lume accented with a pair of broad arrow hands. The left hand dial is dedicated entirely to the oversized power reserve indicator, with a skeletonized and heavily counterweighted arrow hand inspired by aircraft instruments and a clean khaki power reserve scale. 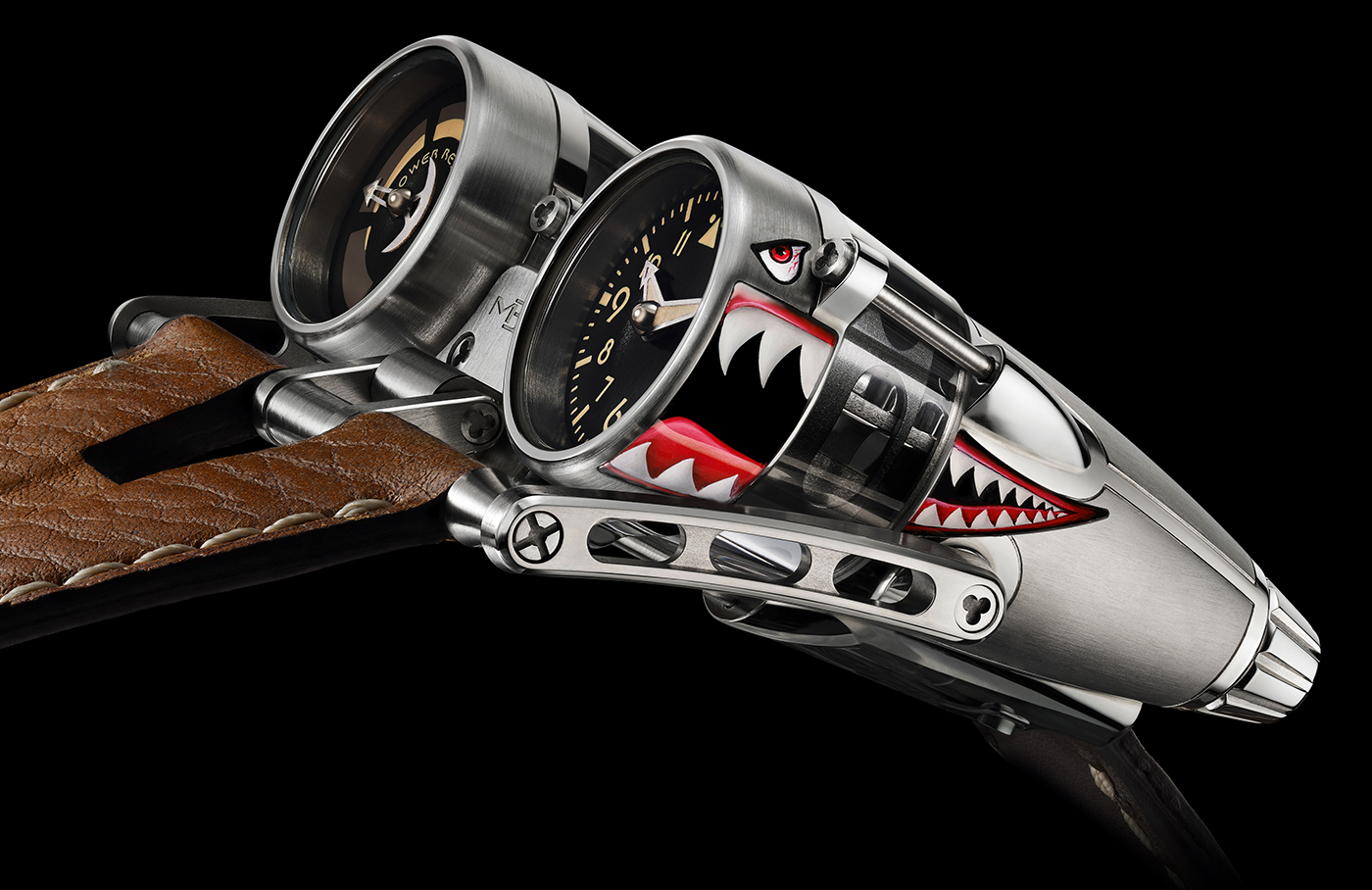 Like previous versions of the HM4 series, the MB&F HM4 Kittyhawk is powered by the manufacture MB&F HM4 handwound movement. With an unorthodox layout to fit the unique case design, the HM4 movement features a pair of tandem mainspring barrels that allow for a robust 72 hour power reserve at a 21,600 bph beat rate. Transferring power from the mainsprings to the dials at the end of the case nacelles involves a complex set of vertical gear trains, while the balance cock at the center of the case is streamlined to display as much of the balance wheel as possible. All in all, the HM4 movement requires a set of 311 components and a massive 50 jewels for its unorthodox layout.

With its radical asymmetric case design, the MB&F HM4 line demands the use of a custom strap, and for the HM4 Kittyhawk the brand opts for a distressed saddle brown leather example with tan contrast stitching. The weathered look seems in initial images to add to the wartime ethos of the design, and its dramatic split lug style and radical taper ensure it’s every bit as eye catching as the watch itself. 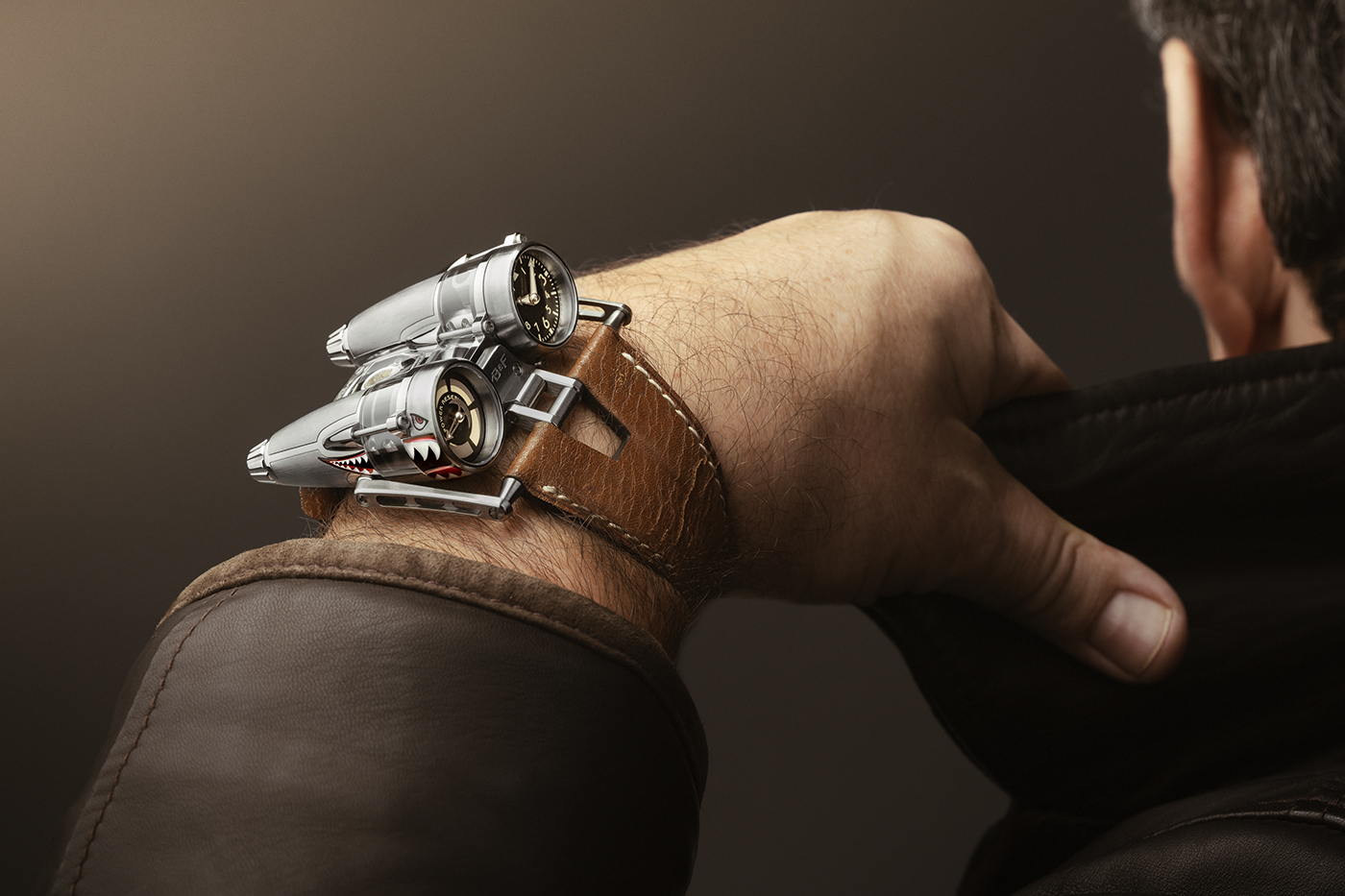 As the second 10th anniversary tribute for MB&F in 2020, the MB&F HM4 Kittyhawk lacks a bit of the radical innovative scope of its predecessors but sends off a fan favorite design with a rugged military look. As the MB&F HM4 Kittyhawk is a unique one-off model with no plans for production or sale, pricing for this watch is not available. For more details, please visit the brand’s website.