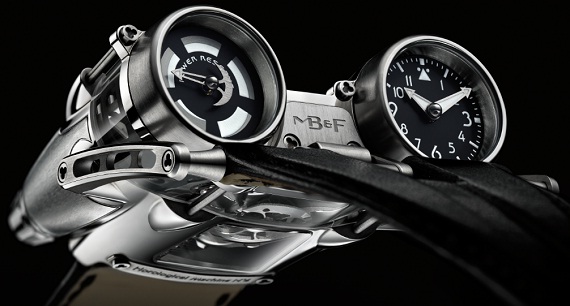 If you have ever wondered what a MB&F aviator watch might look like, then this is your answer. In fact, the actual dial of the brand spankin’ new Horological Machine Number 4 (HM4) “Thunderbolt” watch is a done with a classic aviator style design. I love how MB&F presented this little homage to all those aviator classic with the MB&F twist, including the font used for the numerals and the hands. Like all Horological Machines before it, the point of the watch isn’t primarily to tell time, but to celebrate being a machine, a machine that tells the time. I first covered the HM4 here on Luxist.com when all MB&F allowed me to show was the movement (see the galley images there for live shots of the movement). 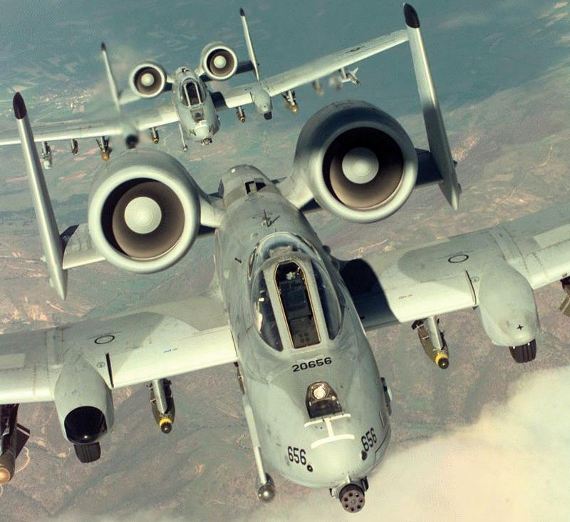 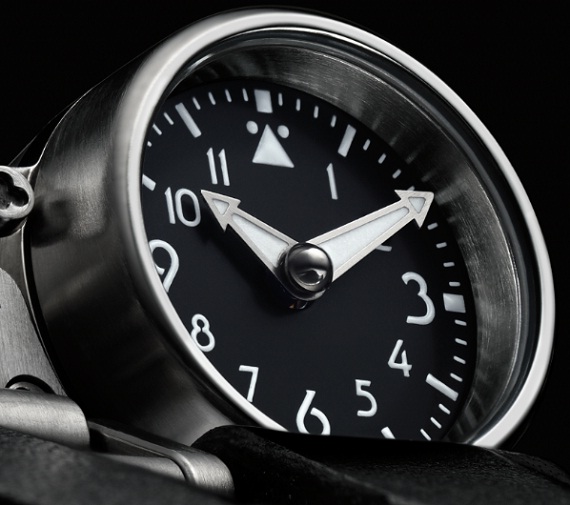 According to MB&F, the main inspiration behind the Thunderbolt watch is the A-10 plane – though lots of people speculated about it being something more Sci-Fi in origin. Actually, ‘Thunderbolt’ is just one of the plane’s names and nickname, but it is the official name, and likely the “nicest” for a watch. The other options are “Warthog” and “Tank Killer.” Neither is particularly well-suited for a luxury watch as far as MB&F is surely concerned. You can see two images I have placed in this article of the A-10 plane. The HM4 is themed after the placement of the two large, top-mounted jet engine turbines, as well as the fact that they wanted to do an aviation themed watch. By the way, the A-1o is an awesome plane. It has been used for decades, and is one of the US army’s most powerful air-to-ground attack planes (that isn’t specifically a bomber, and it has many benefits over a bomber). Always exciting is the giant nose-mounted gatling gun. The plane is also really strong, having much more armor than other planes. Because of its hefty weight, it has those large engines to help it take off and fly as best as possible. 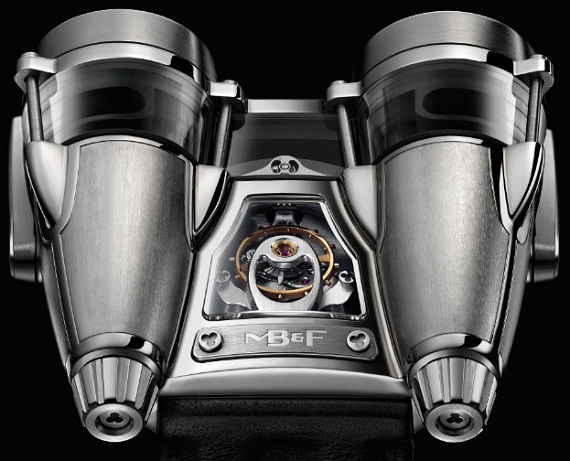 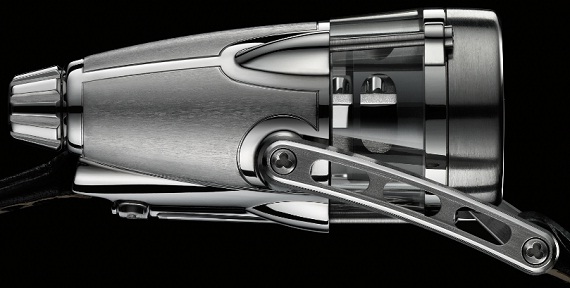 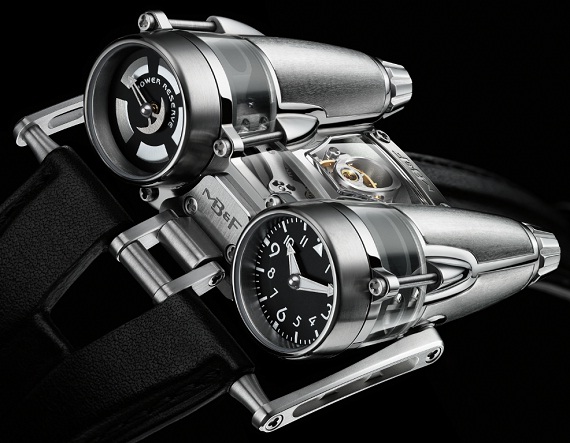 If you thought titanium was used a lot on watches, the A-10 has an armor cage around the cockpit and instruments that is 900 pounds of titanium. Titanium is also used as the case material for the HM4 Thunderbolt watch. One of the most complex cases ever made by MB&F, the case is made from a series of parts with a unique strap attachment mechanism and sapphire segments of the two “engine tubes.” The case is 54mm wide by 52mm long, and 24mm high. The watch has over 300 tiny, polished, and loved parts – in the movement alone. Thunderbolt’s case is comprised of another 65 parts. The design makes some very clever uses of alternative polished and brushed surfaces. It also takes MB&F’s fascination with sapphire crystal to a new level. On the top and bottom of the case are sapphire crystal windows over the movement, and there are the very hard to machine previously mentioned sapphire sections around the conical tubes. There are 5 sapphire crystals on the case, and require about 100 hours of machining alone, per watch.

You can move the HM4 around in all sorts of angles being able to easily see inside of it. The movement is a thing of beauty – designed specifically for the case, and very symmetrical. It has 72 hours of power reserve. This is one of the most artistic machines that MB&F has ever created. On the top of the movement (visible through the sapphire crystal) is the balance wheel, and on the other side of the watch is a visible bridge over a gear that is MB&F’s signature battle axe shape. The movement is manually wound. 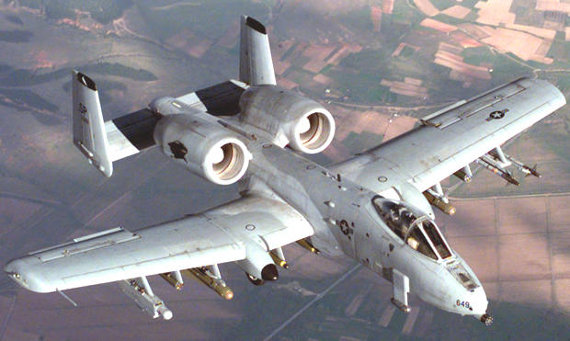 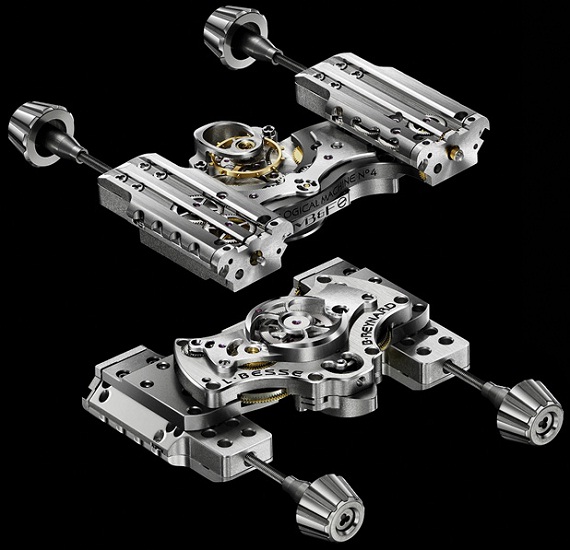 You’ll notice that each of the tubes (MB&F calls them “pods”) has a crown at the end of it. One crown is used for winding the watch, and the other is used for adjusting the time. Based on what tube the crown is placed, it should be obvious which one does what. The Thunderbolt has just two functions. It tells the time via hours and minutes, and has a power reserve indicator. Worn on the wrist, the two dials should be angled to the wear, making the watch easy to read without having to turn the wrist. This watch feels more like an instrument than any previous MB&F watch. It is really a fantastic machine.

The watch dial is in pilot watch style like I said. Complete with the triangle and two dots 12 o’clock hour indicator. MB&F used their special futuristic font for the Arabic hour numerals, and hands that feel familiar to the brand. The black dial is contrasted with white SuperLumiNova luminant on the hour markers and the hands. 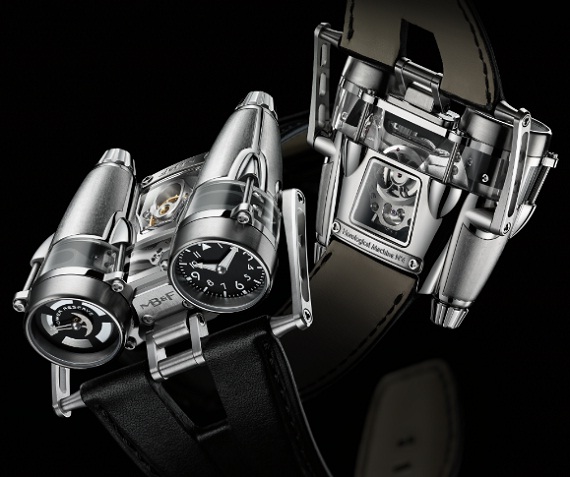 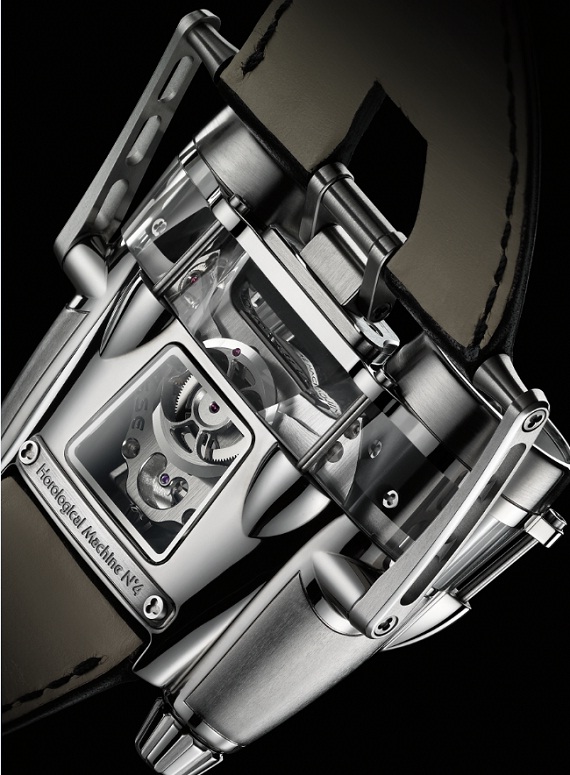 MB&F spent a lot of time working on the strap it seems. It has a cool flexible lug at one end, and looks to be in a tapered, thick black leather (totally pilot watch style). Detailing on the watch is impressive, and the movement and case work together in a satisfying harmony that will certainly charm both existing and new fans of the brand. MB&F will provide a special service for people who own all 4 of the Horological Machine watch from MB&F. For such “quad” owners, MB&F will engrave their name on a special plaque which will go on the movement.

The MB&F HM4 Thunderbolt will not be a limited edition watch, but will be produced in limited amounts of about 25-35 pieces a year. There will be just 20 HM4 watches for 2010. Price is in the middle of the Horological Machine range, at $158,000. I will get my hands on this watch soon for a full expose most likely. 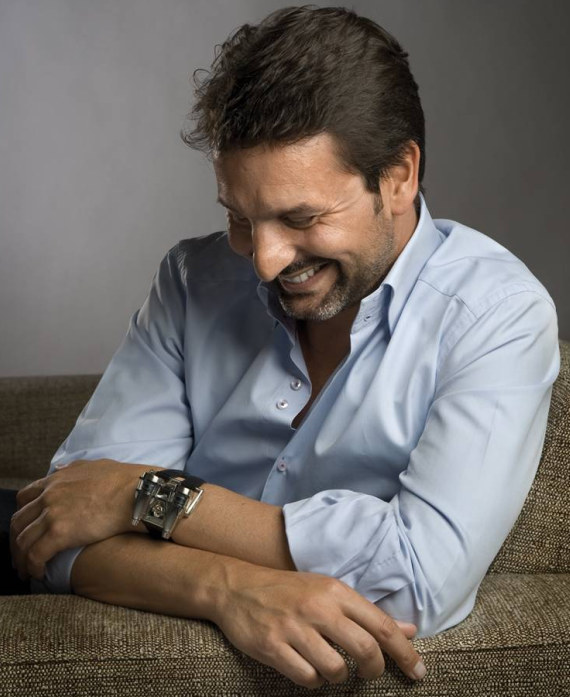