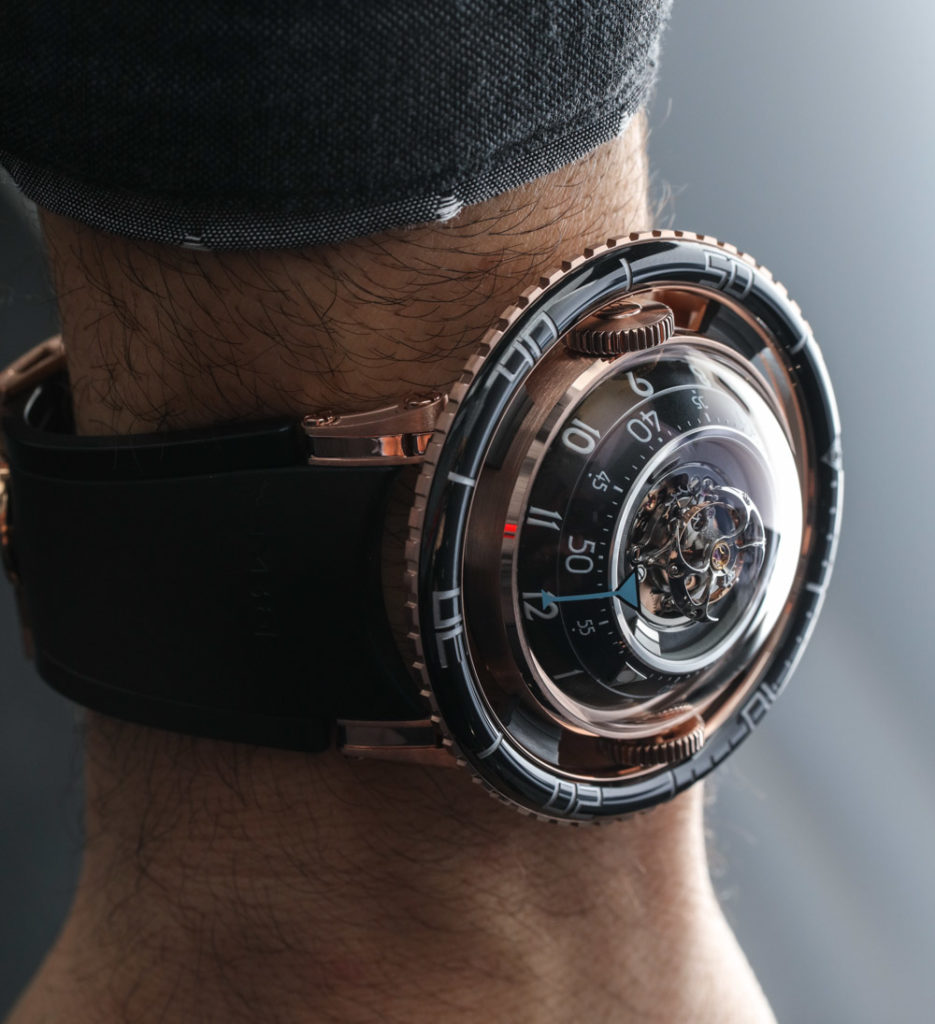 MB&F pairs blue color accents with the titanium version of the MB&F HM7 Aquapod and black accents with the 18k red gold model – each with a relatively classic appearance given the overall state of the watch. An arched piece of ceramic with cut numerals (applied with platinum-colored paint) is used as the insert for the rotating bezel. Once again, you get the feeling that this watch so very much wants to be a true diver. The question, though, is whether it is a king of dive watches or a king of wannabe dive watches? If that even matters…. 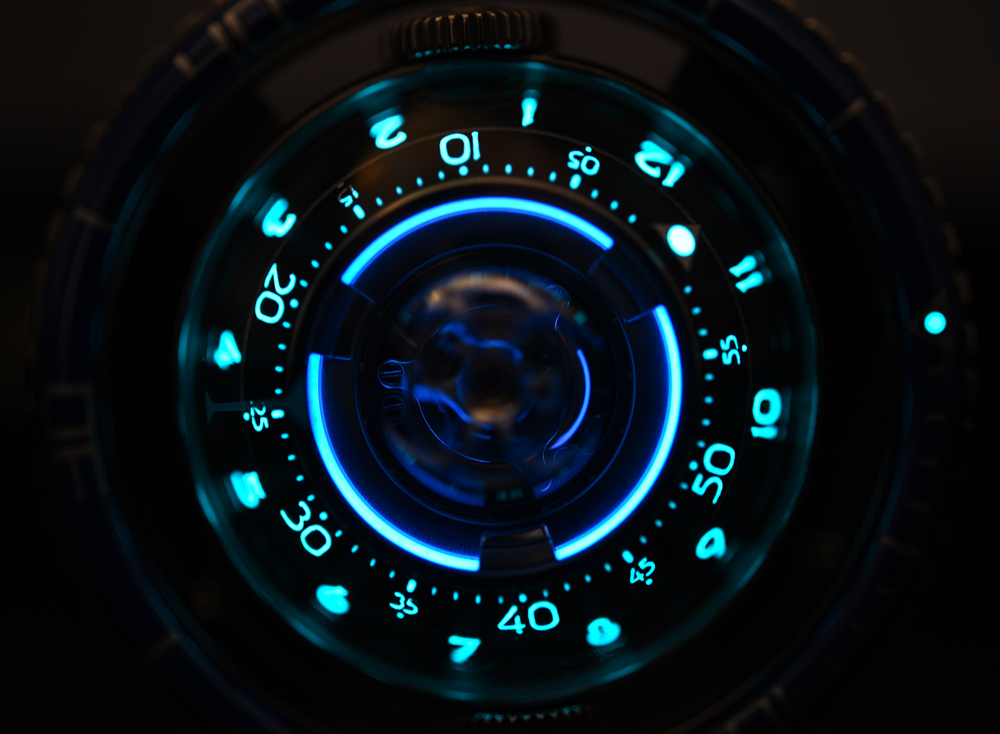 Like any good dive-style watch, the MB&F HM7 Aquapod comes equipped with lume, and I will immediately say that the darkness viewing experience of the MB&F HM7 Aquapod is lovely. On the front of the watch, luminant is applied at the 60-second marker of the bezel, and all over the numerals on the time rings. There are also three long strips of lume encircling the tourbillon which are intended to “light it up.” There is even more lume in a series of vertical strips on the back of the watch, applied to the “tentacle-style” design of the semi-spherical automatic rotor for the movement. 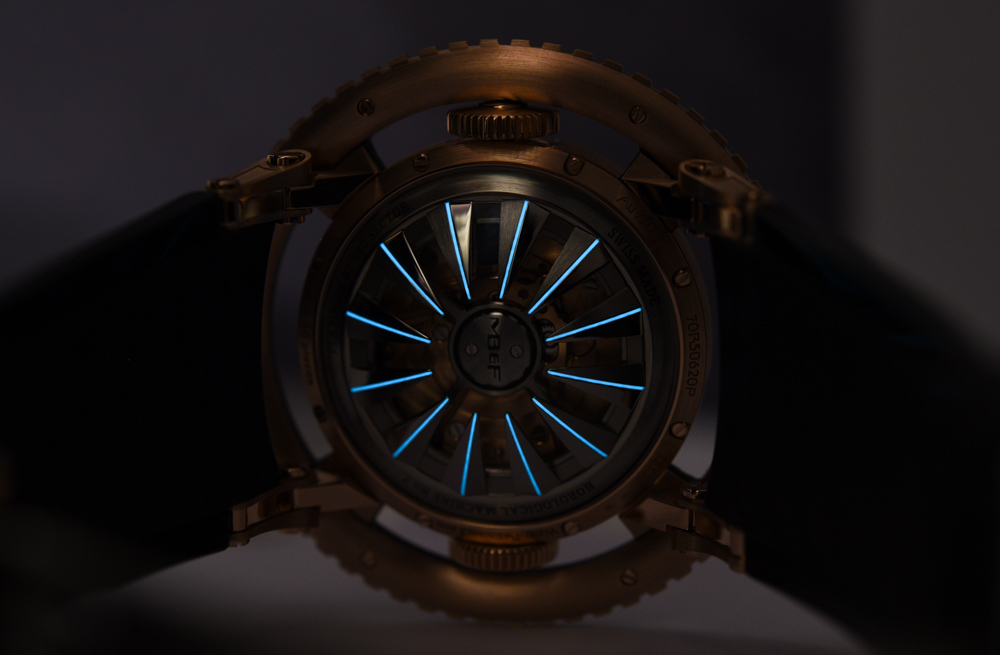 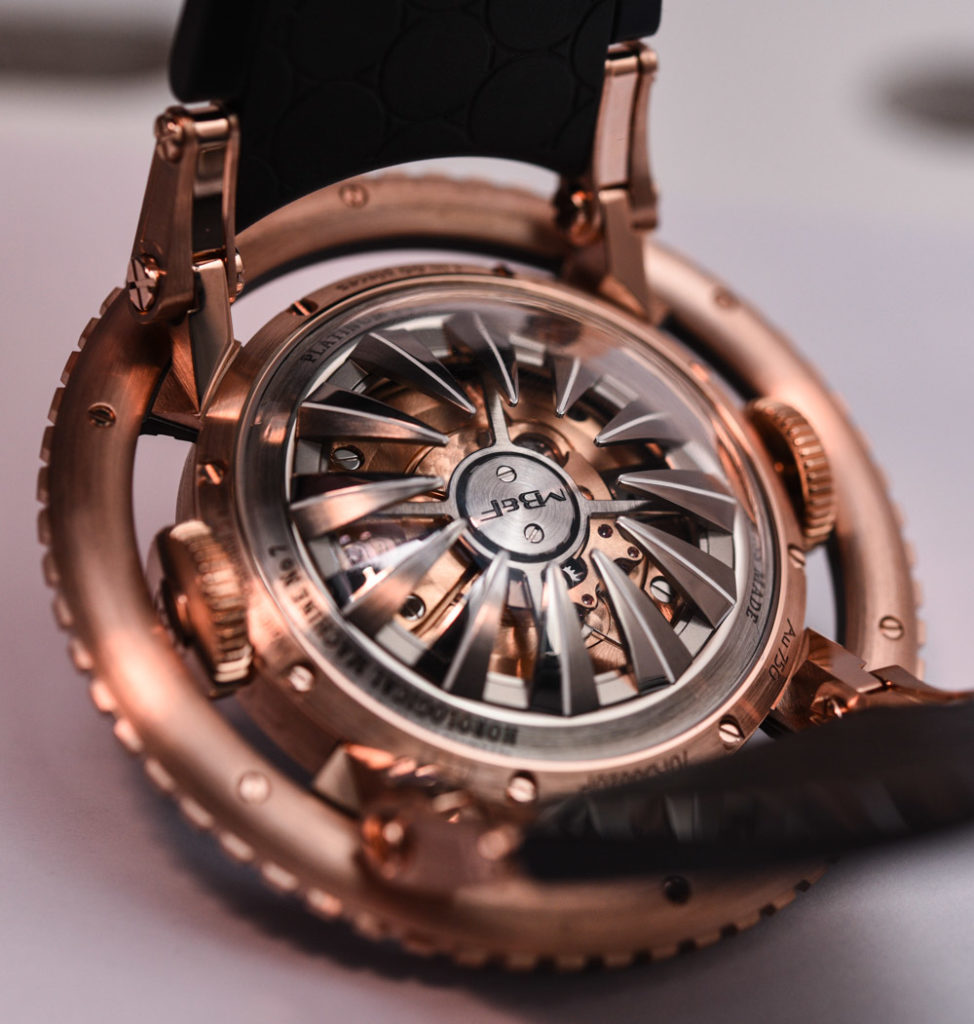 In the center of the dial, MB&F once again revisits the centrally mounted flying tourbillon. MB&F started it all with a central tourbillon in the original Horological Machine No. 1 (HM1) back in 2007. More recently, the HM6 contained a central tourbillon, and now the HM7 revisits the notion. It’s there as art and as an appreciation of horological technique. It also helps remind the “partially initiated” that the watch is expensive. 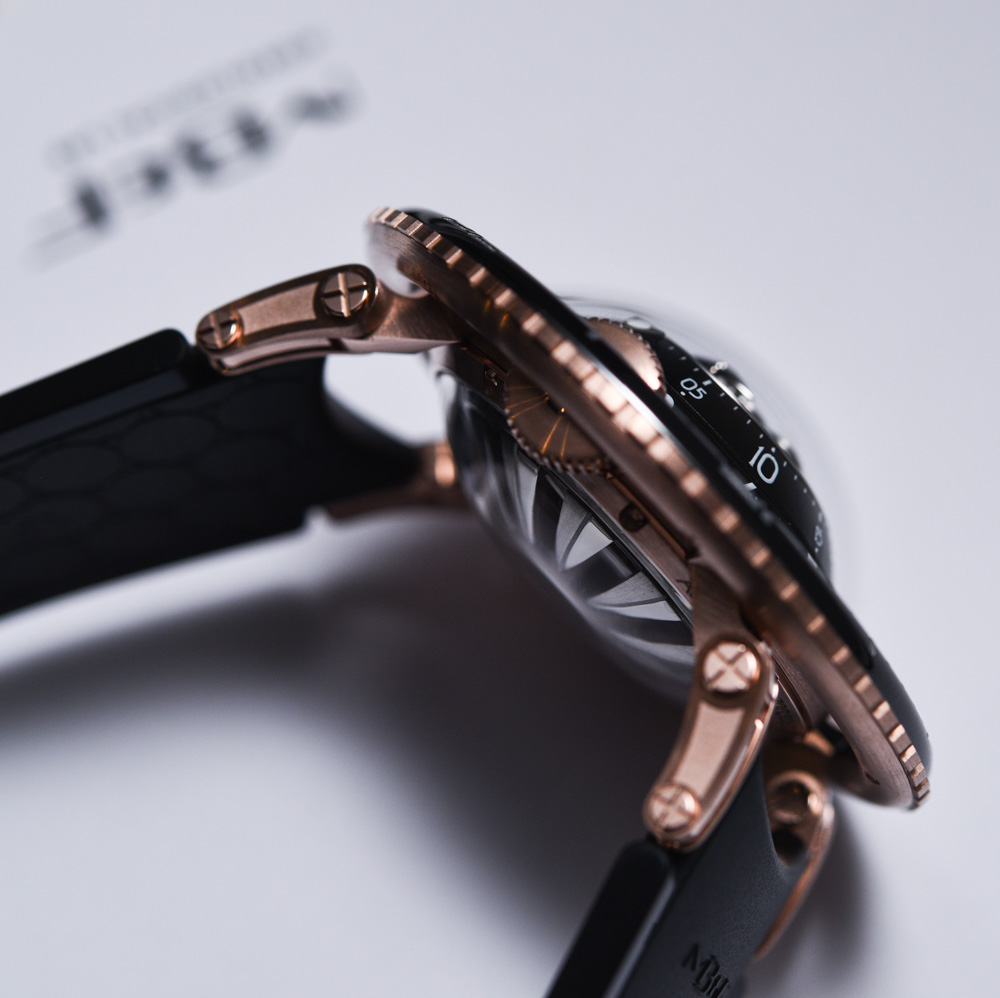 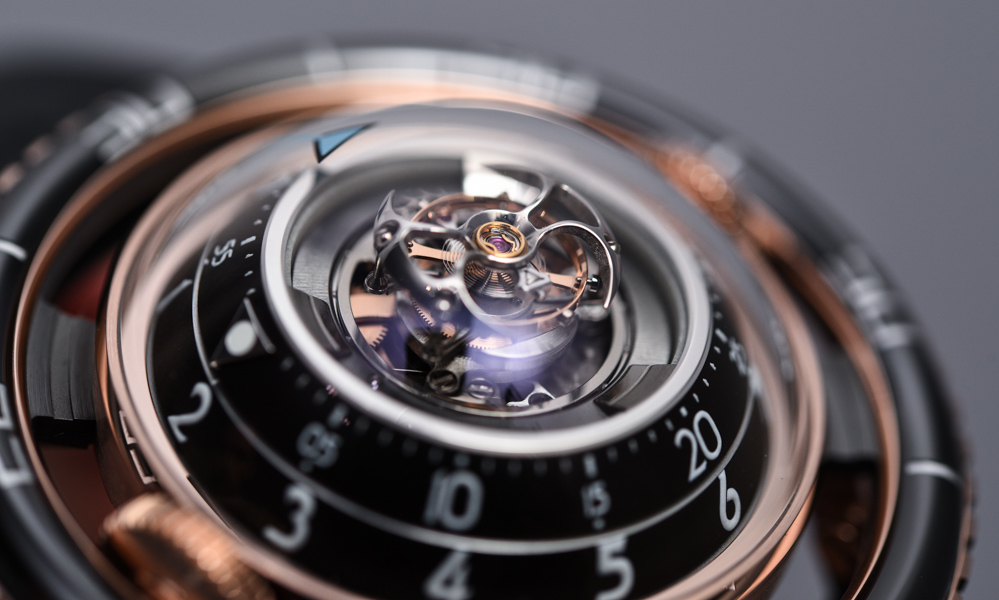 The mechanical automatic movement inside of the MB&F HM7 Aquapod predictably needed to be developed by the team exclusively for this watch – especially given the more spherical nature of the case. Comprised of 303 parts the 2.5Hz (18,000bph) movement has a power reserve of 72 hours (three days). Don’t miss the MB&F battle axe logo in the design of the tourbillon cage. The rings to indicate the time are produced from titanium and are set on ceramic ball bearings. The real elegance of the movement is not only in its straightforward operation, but also its construction. This is because unlike most movements which are designed to be more flat, the MB&F HM7 Aquapod movement quite literally has the tourbillon set on top of a short tower. 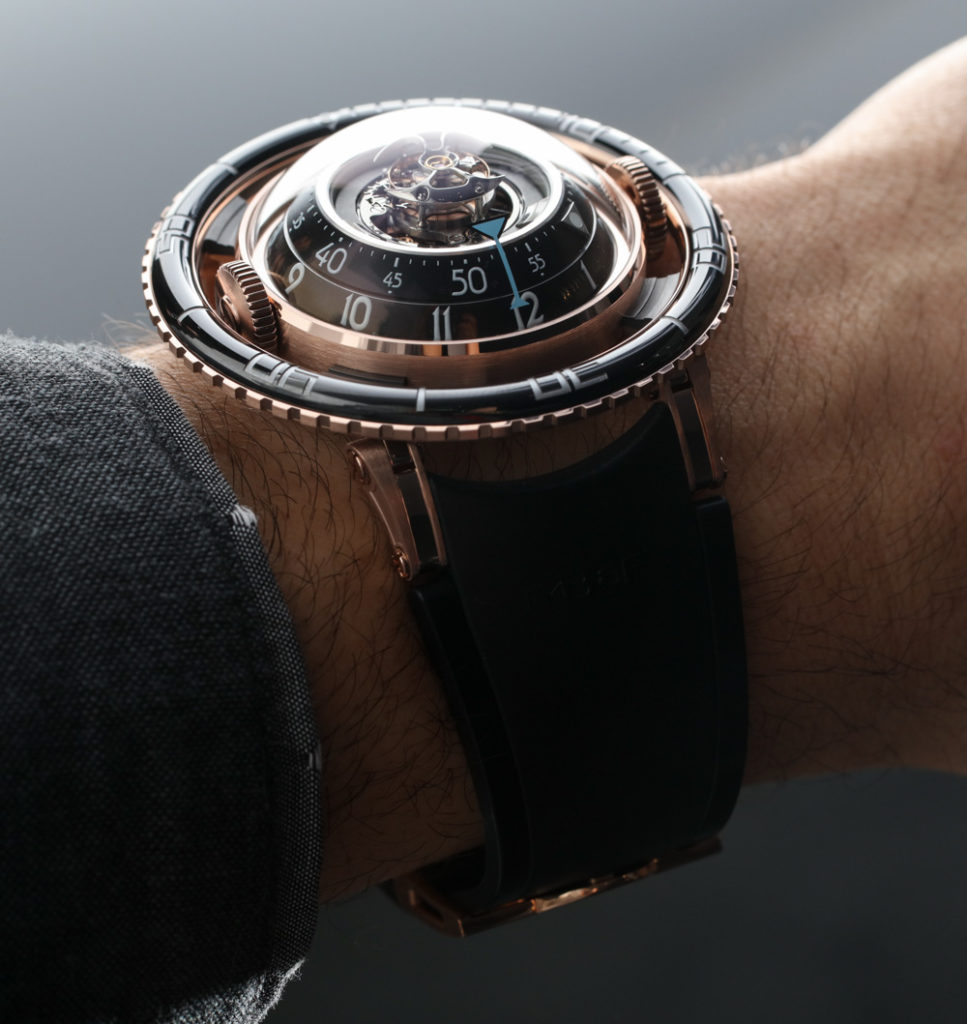 As I wrote this recap of our aBlogtoWatch hands-on experience with the MB&F HM7 Aquapod, I asked myself to reevaluate the statement I began with, which is that the 7 is the wildest Horological Machine I’ve ever worn. My statement should be amended for clarity. I actually think that the MB&F HM6 Sapphire Vision is the most wild one I’ve ever worn. Though, I’ve never considered a watch like that suitable for daily wear. What I should have originally said is that the MB&F HM7 Aquapod is the wildest MB&F watch I’ve ever worn that I would easily consider wearing regularly. Once again, the MB&F Horological Machine No. 7 Aquapod is a limited edition of 33 pieces in titanium and 66 pieces in 18k red gold. Price is 98,000 Swiss francs and 118,000 Swiss francs, respectively. mbandf.com