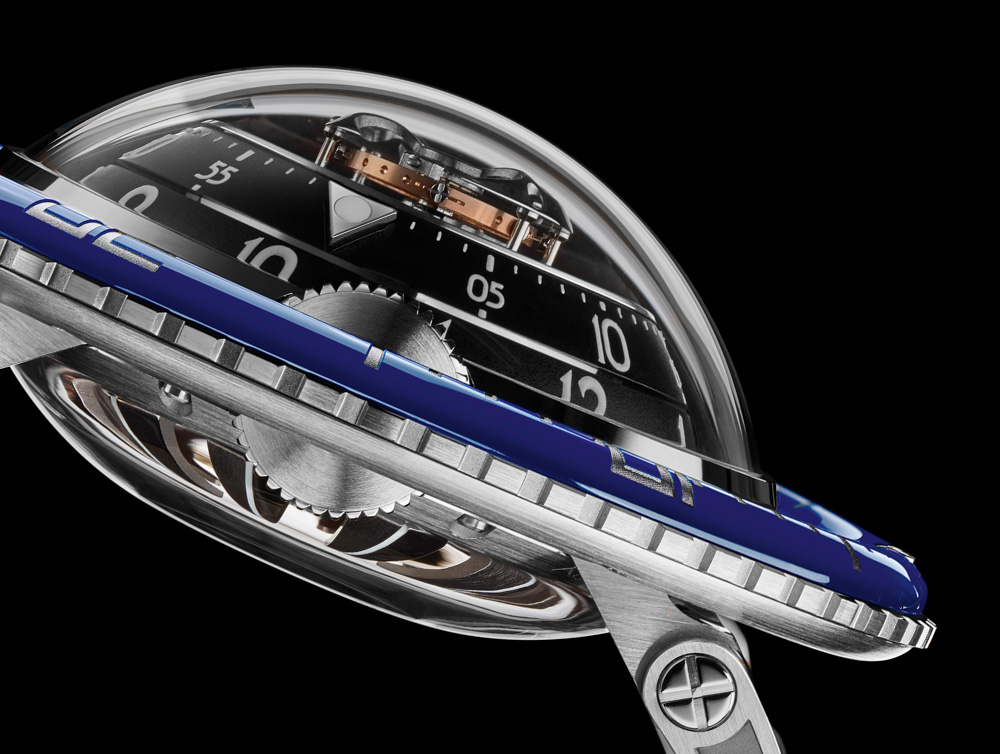 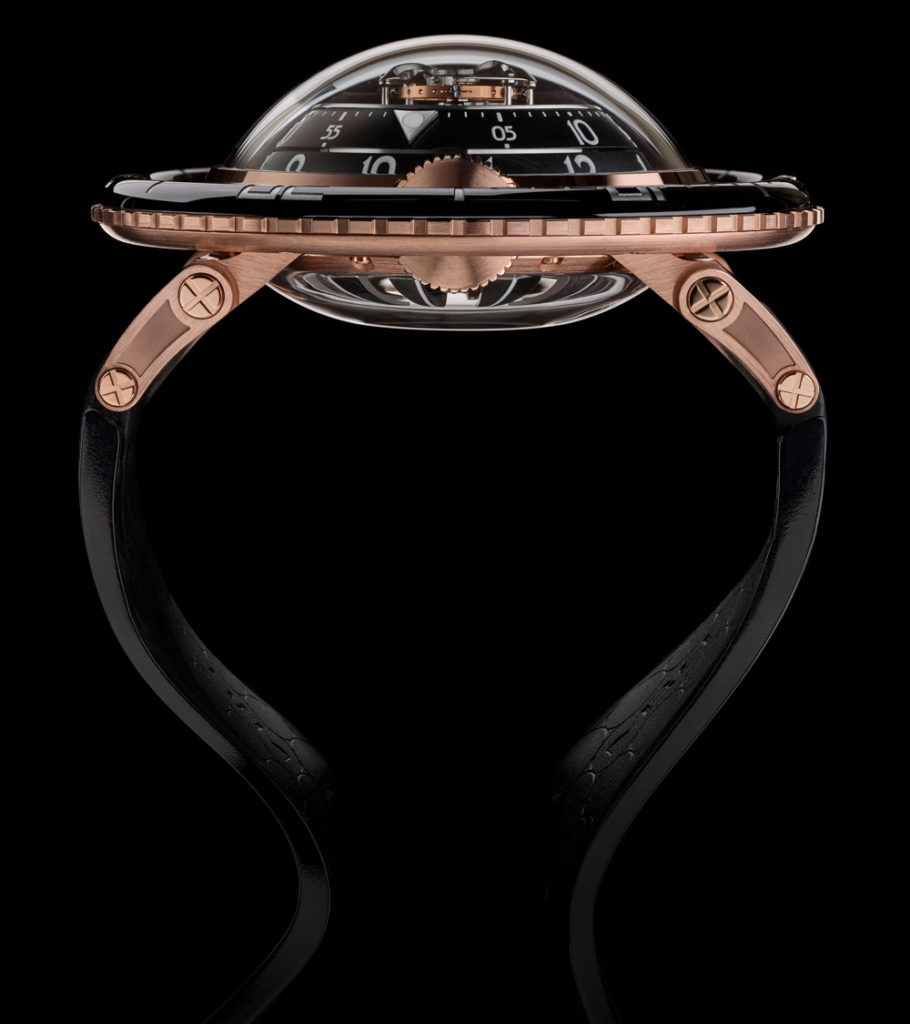 For SIHH 2017, Geneva, Switzerland-based watchmaker MB&F debuts the Horological Machine No. 7 (HM7) Aquapod – and it is pretty darn cool. While diving watch in style, MB&F is quick to point out that the “HM7 is not a diving watch.” Why? If there is one downside to this marvelous beauty, it is that it only has 50 meters of water resistance. Perhaps we should simply consider this a “swimming watch.” Then again, if you have one of these circa $100,000 flying tourbillon-equipped timepieces on your wrist, you likely aren’t going to rely on it in aquatic environments for more than mere wading. 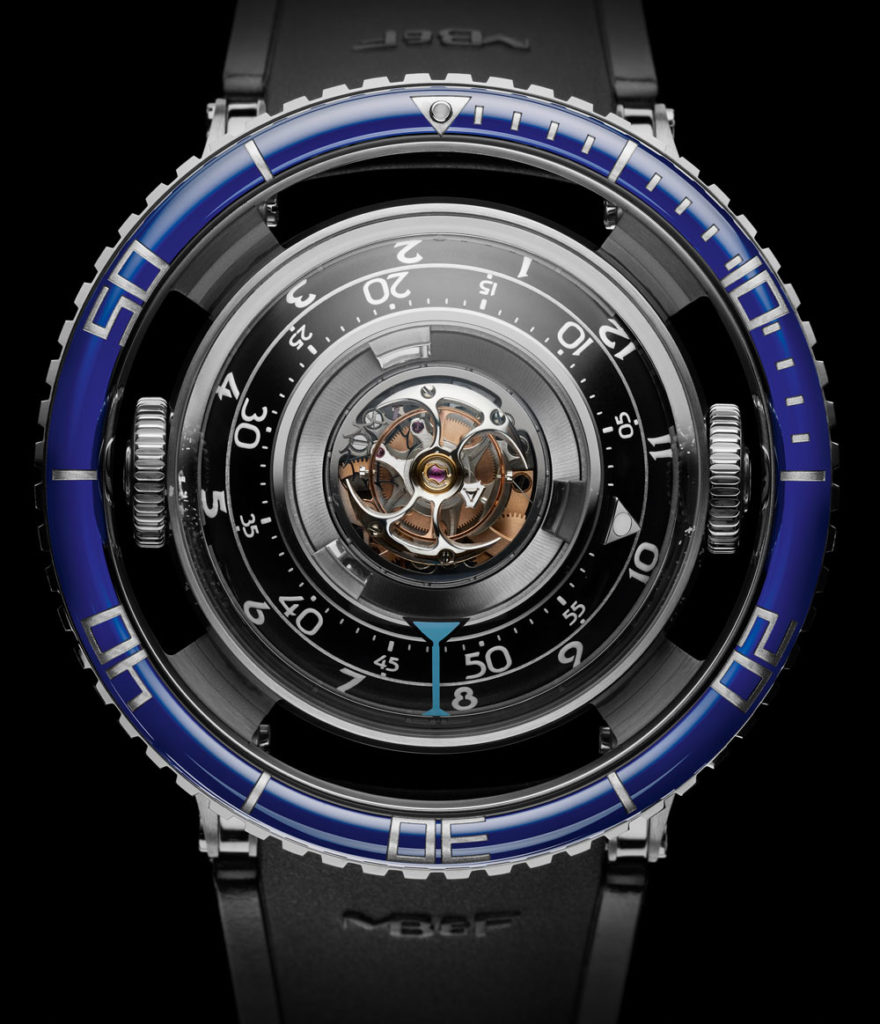 Before discussing the fascinating technical elements of this jellyfish-inspired timepiece design, a few words in general about MB&F at the outset of 2017. As a company, MB&F has done two very difficult things. First, it has been able to capture the hearts and minds of the watch and design enthusiast community for over a decade through a series of product debuts. This means that MB&F’s team including founder Max Busser and its dedicated staff have demonstrated an incredible consistency of quality in almost every product they release. This implies an intense level of focus and likely internal ability to accept and evaluate criticism. What does that mean? I think that MB&F has a good system that allows itself to refine each idea prior to going into production. Moreover, there seems to be a highly effective feedback loop that allows potential issues to be mitigated and refined before anything reaches a consumer. This is the only way that the brand could ensure such consistently good quality in design, technical production, and marketing.

MB&F has also been able to remain boutique yet professional. Capping production volumes and activity has probably held back profitability, but has allowed everything else to remain solid. Max Busser has hinted at this fact to me on many occasions, and I think it is worth mentioning. In a sense, the brand has traded potential growth for an ability to maintain its personality and soul – and that no doubt requires constant discipline. Many other brands have gone the other route. In a sense, MB&F is a very personal brand to Max Busser and his inner team. Remove them and the magic goes away. That means what we are seeing in terms of product and quality is something special that is a result of a particular assortment of individuals, in a particular place, at a particular time. It can’t be replicated and eventually in the future (near or far) it will be disbanded. With that knowledge, I continue to pay close attention to the brand knowing that inherently their work is ephemeral and valuable. 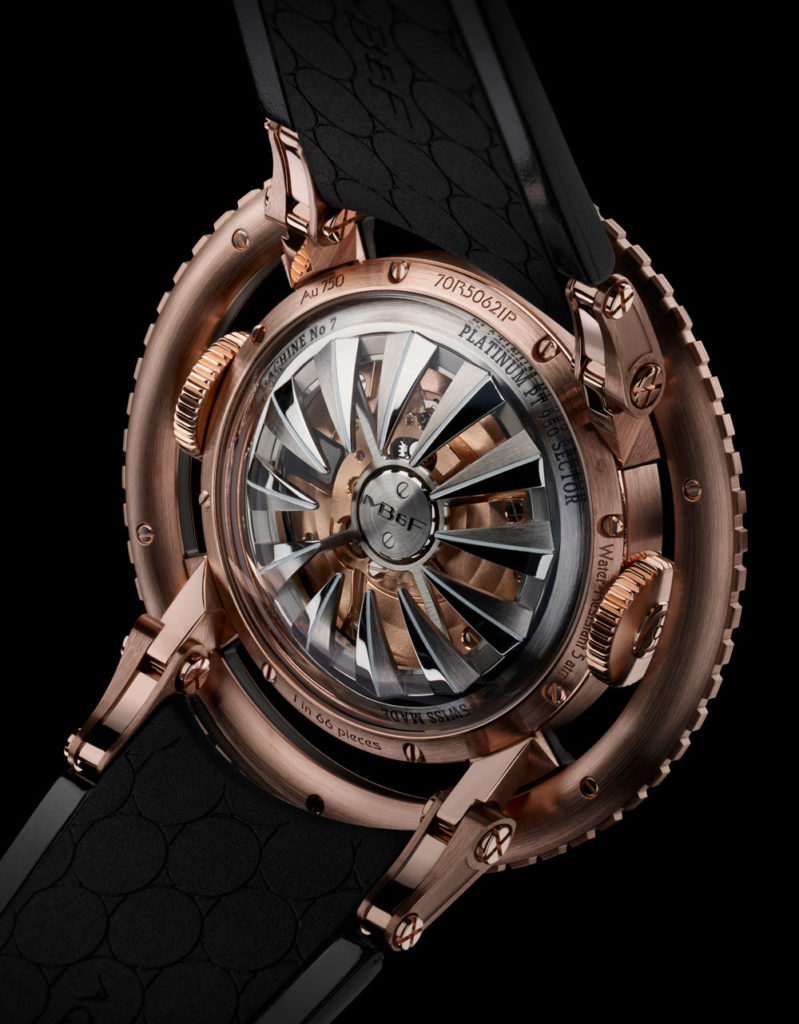 OK, so on to this MB&F HM7 Aquapod, which in all likelihood will wear like a thick Casio G-Shock in terms of overall proportions. Also note that this is the first round-cased Horological Machine that the brand has produced. Max Busser defied his own conventions when producing the original Legacy Machine 1 (LM1), which was the first round-cased watch the brand produced. This might seem like a minor point, but it is a big deal to the established watch community in Switzerland that sees “round” as established and conservative and anything other than that as being at least a little bit edgy. MB&F came on the scene in order to offer more innovative aesthetics, so the idea of doing something round was sort of contrary to the mission of the brand. Now, after exploring a range of watch case shapes, the brand feels comfortable enough to produce something that does indeed have a round case profile – even if the MB&F HM7 Aquapod is anything but a traditional round watch. 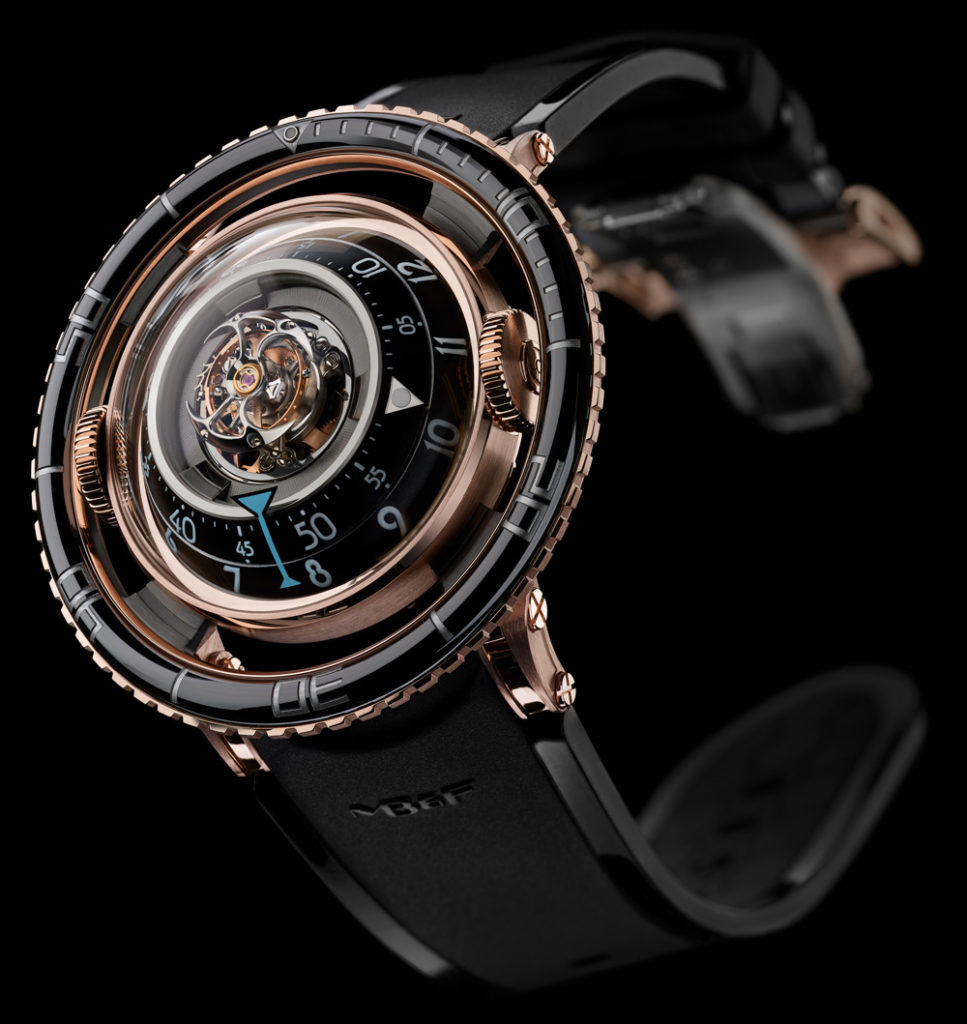 Another quirk to the release of the MB&F HM7 Aquapod is that it comes after the release of the HM8. It was not that long ago that MB&F released the Horological Machine No. 8 Can-Am watch in September of 2016. These types of products have long lead times, and so what I believe happened is that the HM8 was simply ready prior to the HM7. Why the two models were released so close together is unclear, though I am sure MB&F has their reasons. If anything, the once uncommon release cycle of watches from the brand has accelerated over the last few years. Production quantities are still very low, but it is increasingly difficult for us as well as collectors to keep up with all the new things the brand has been coming out with. With that said, judging by products like the MB&F HM7 Aquapod, there does not seem to be a lack of creative fuel at the brand. 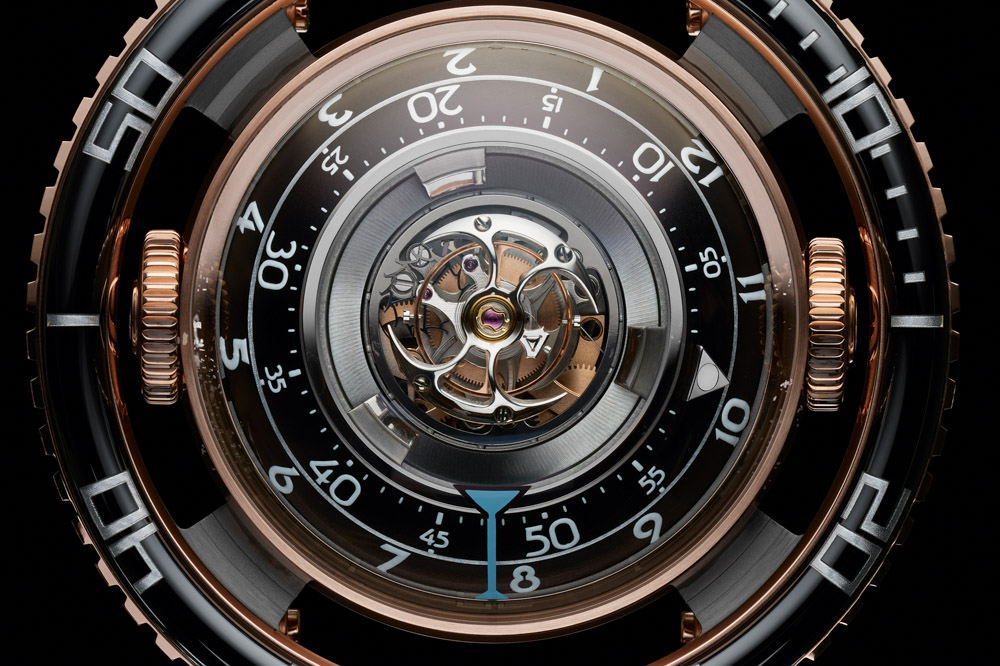 One of my favorite watch brands of all time was inspired by jellyfish, and that is the now defunct Nubeo. Their Medusse Project watches had a distinct way of taking aesthetic and shape cues from our gelatinous cnidarian friends in the sea. MB&F follows suit, but in their own manner with the MB&F Horological Machine No. 7. As in the Nubeo, the easiest way of seeing the jellyfish look is by seeing the Aquapod from its side. MB&F once again relied on their long-time design partner Eric Giroud for the design of the MB&F HM7 Aquapod collection. 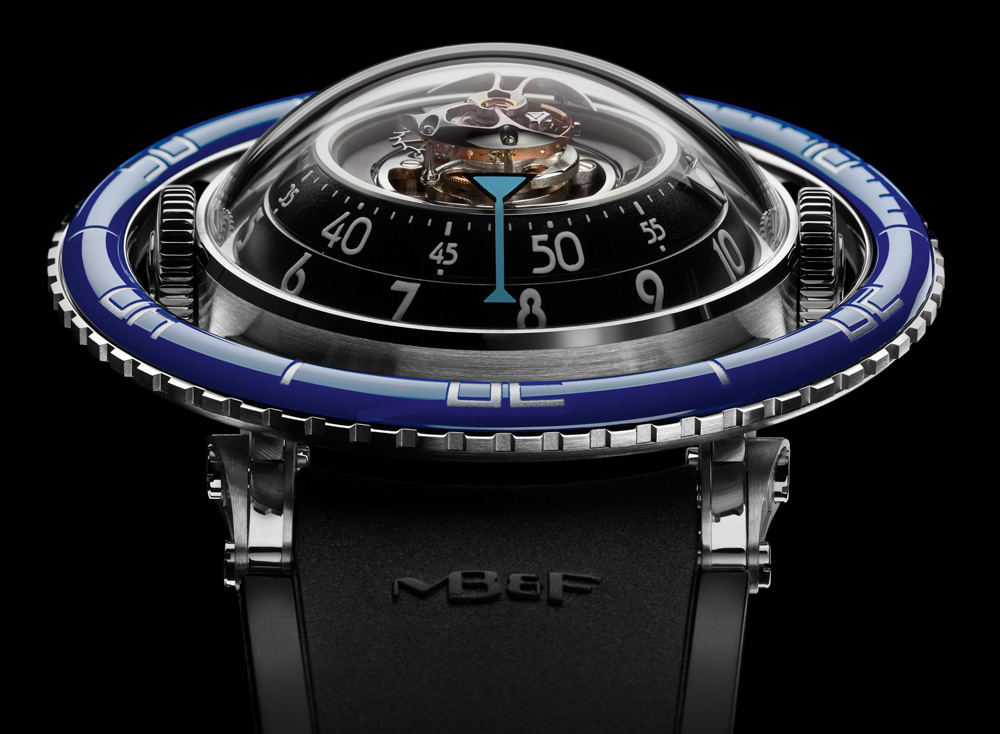 To start, the MB&F HM7 Aquapod is being produced as a limited edition in two versions, with one being in titanium and one being in 18k red gold. The case is 53.8mm wide and 21.3mm thick produced from a whopping 95 parts. Though it will wear smaller given that the crowns (there are two) are in the middle section of the case, and because the lugs are narrower and more inset than the overall case dimensions suggest. I haven’t see the MB&F HM7 Aquapod yet at the time of writing, but I imagine that it will be comfortable to wear, but sit tall off the wrist.