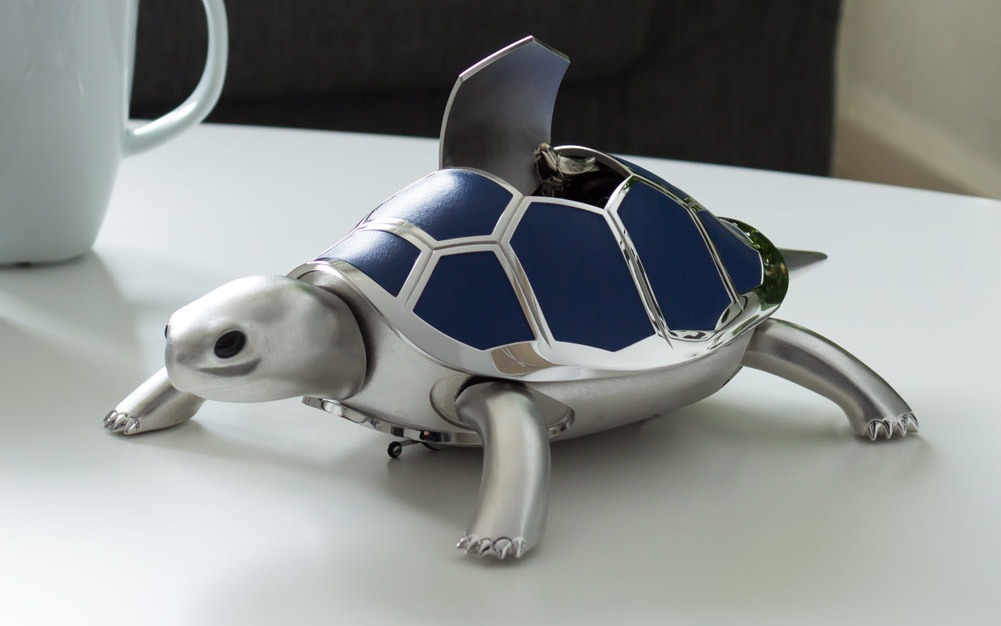 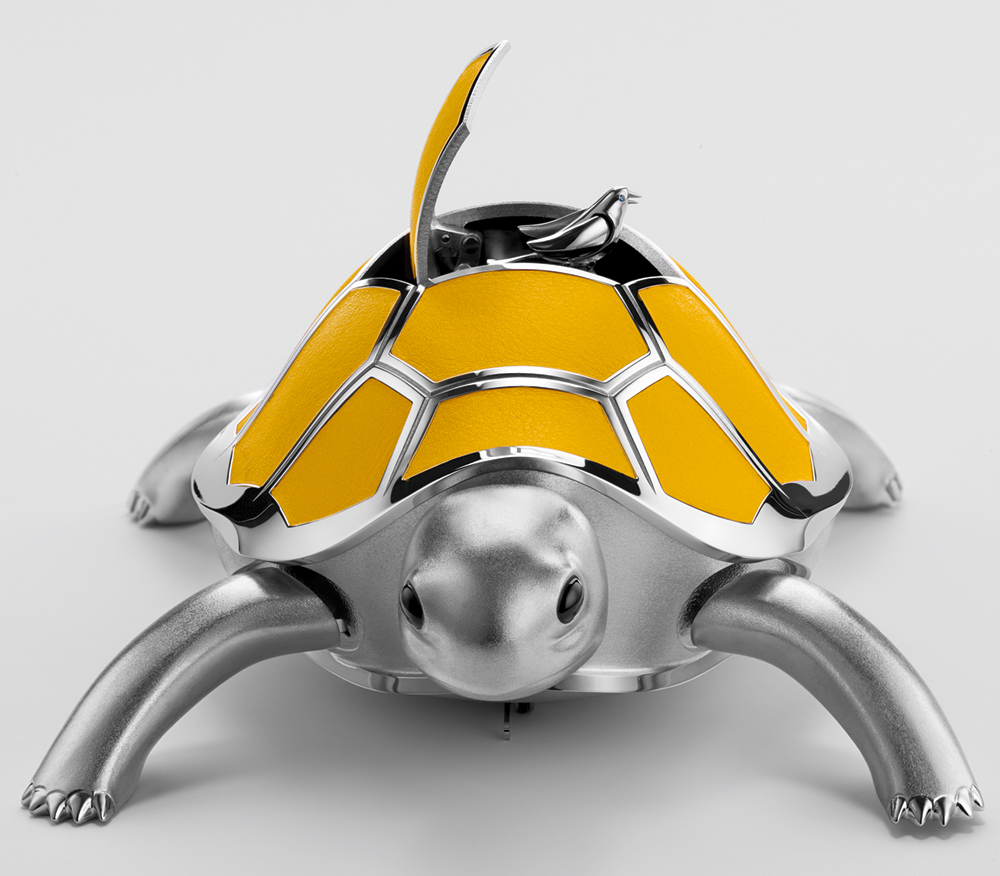 As an “horological concept laboratory,” Swiss watchmaker MB&F have certainly made some strange contraptions in recent years. The Octopod Clock for instance looks like something which might adorn a comic book supervillain’s desk. Previously, most of the brand’s “machines” have had some link to horology or timekeeping. Not so with the MB&F Kelys & Chirp Mechanical Toy, which does not tell the time in any way whatsoever. What it does offer is an automaton tortoise with a singing bird who lives in, and pops out, of its shell. It’s surely destined to become the coffee table attraction of choice for the wealthy tortoise-and-bird loving, automaton-collecting socialite demographic, should such a thing exist. It’s both charming and quite pricey at just under $50,000. 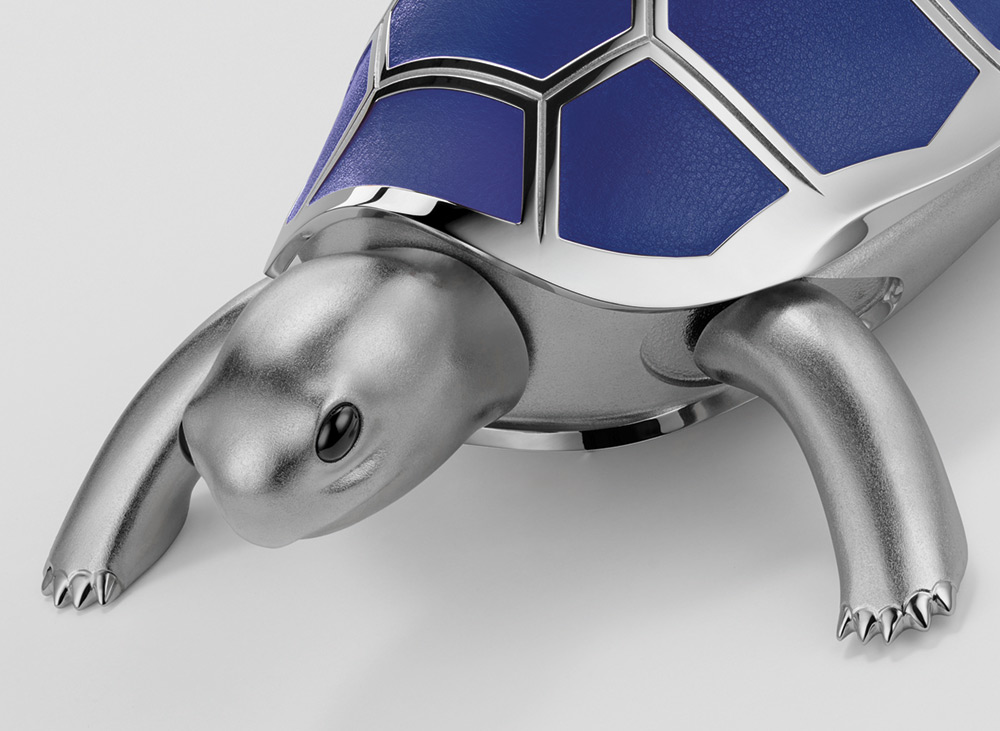 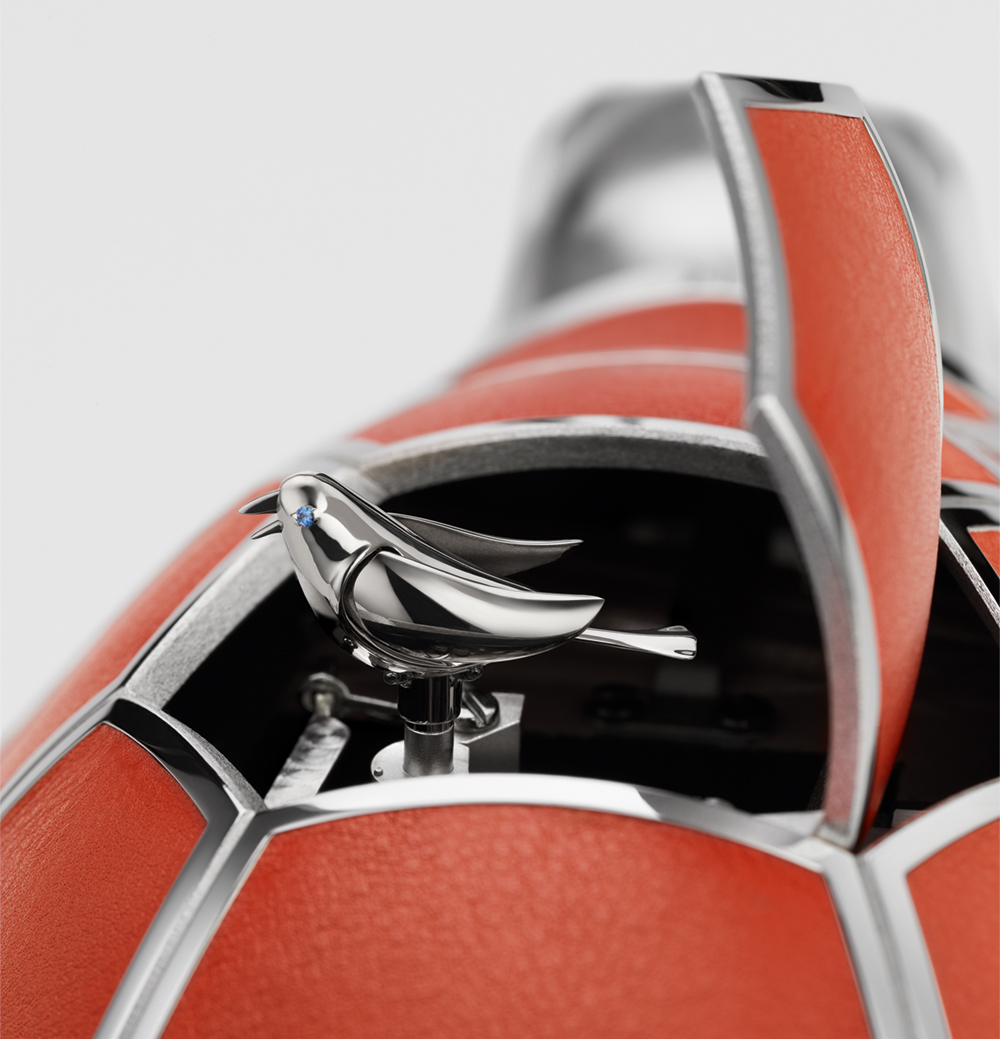 The MB&F Kelys & Chirp Mechanical Toy was developed as a co-creation between Reuge and Nicolas Court. Reuge was founded in 1865 as a musical pocket watch specialist in Sainte-Croix, Switzerland. Since 2006, the brand has been under the guidance of CEO Kurt Kupper, and has expanded into bespoke music boxes and singing bird complications. In recent years, Reuge has partnered with MB&F to release a series of “MusicMachines,” including the first which played Star Wars and Star Trek music, the second in the shape of Star Trek’s USS Enterprise, and the third crafted to appear like a Star Wars Tie Fighter. Apparently either Maximilian Busser or Kurt Kupper (or both) have a passion for science fiction. 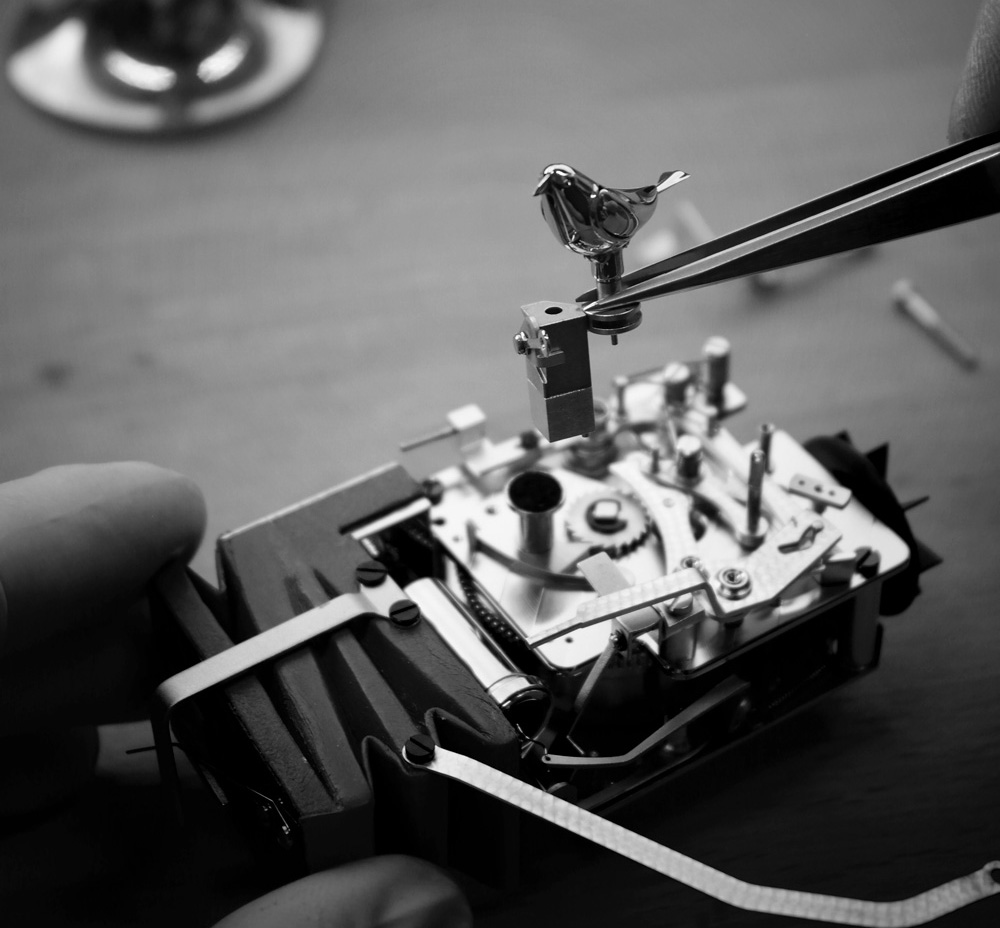 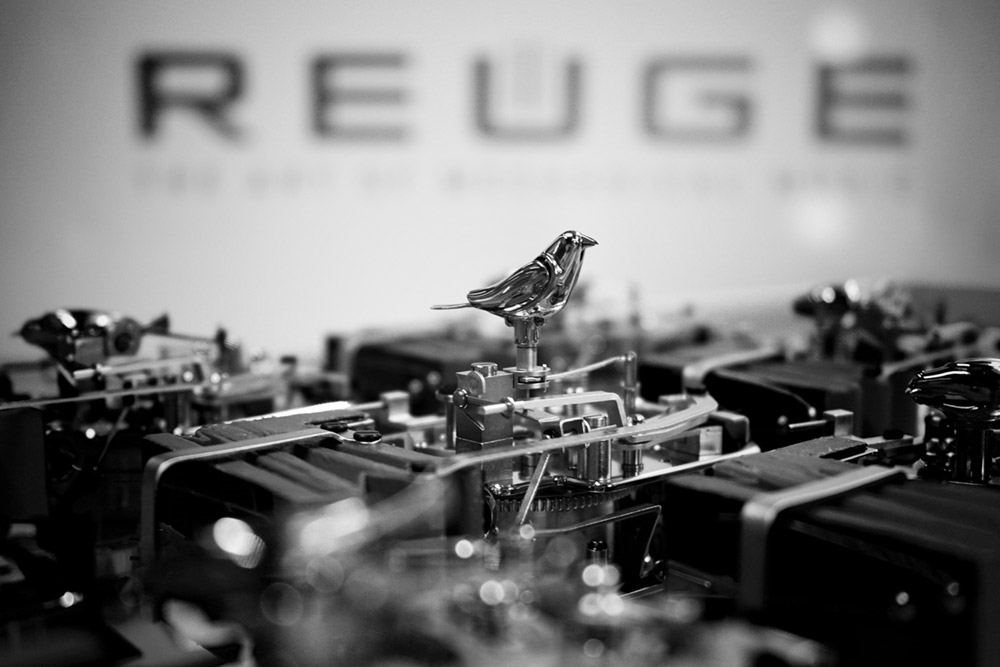 Nicolas Court is an independent micro-mechanic who has worked for T.H.A. (Techniques Horlogères Appliquées) where he was responsible for the creation of Breguet Sympathique clocks, as well as working on projects for his own watchmaking brand called “Arts15.” Court has partnered with Reuge several times in the past, resulting in creations like the Chiffchaff singing bird and
the Escalado Horse Race automaton. Court as an automation specialist was responsible for creating the tortoise’s mechanism for the MB&F Kelys & Chirp Mechanical Toy, while Reuge created the Singing Bird complication. 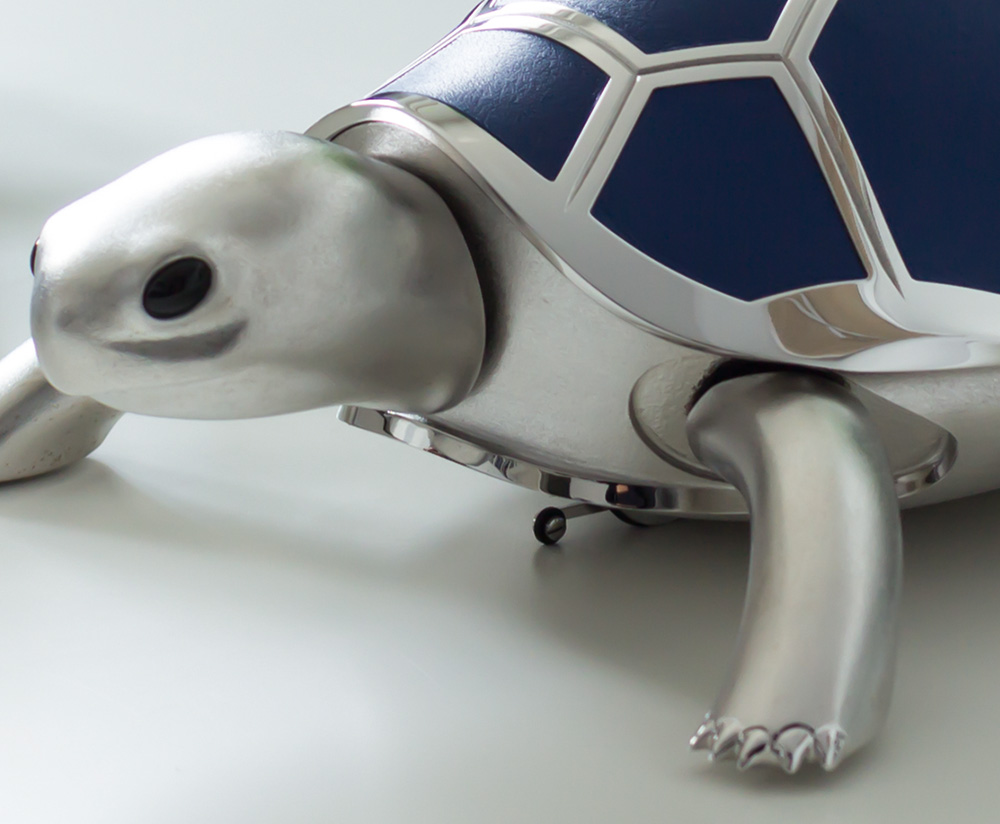 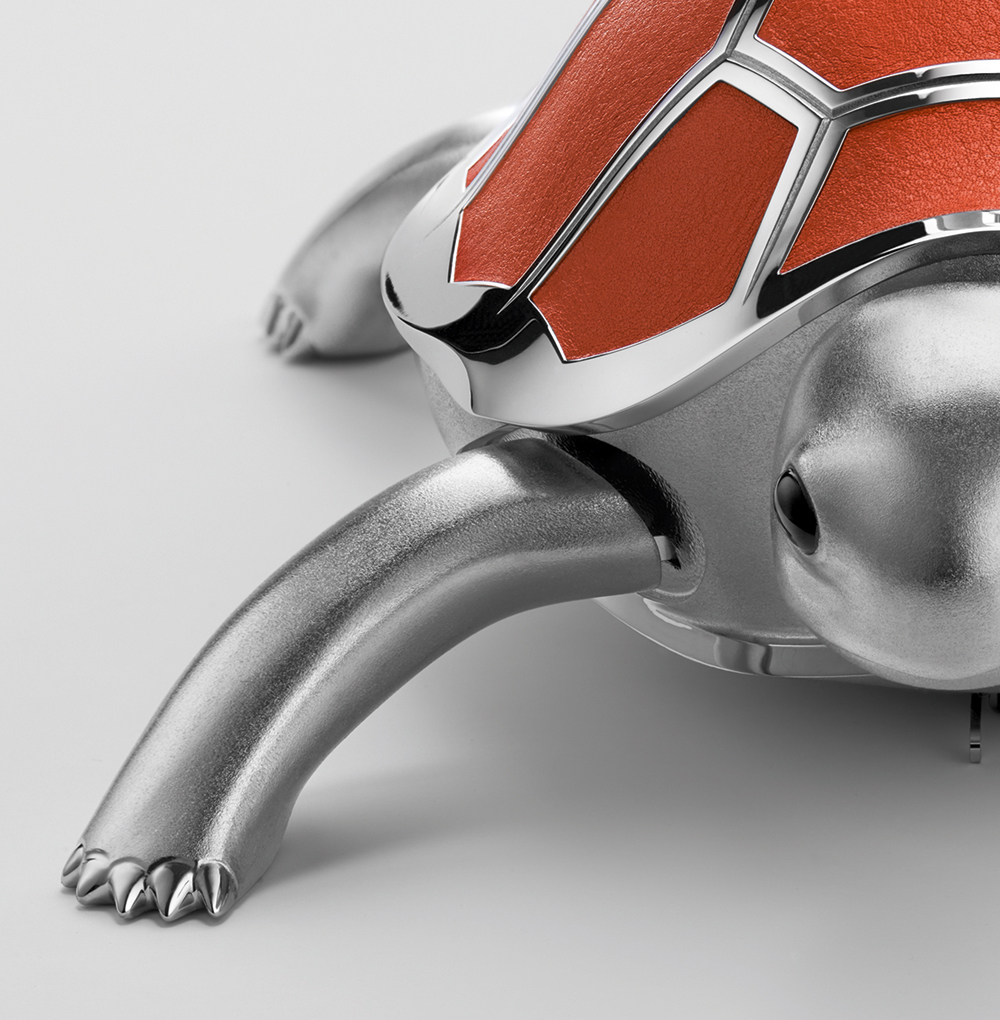 When activated, Kelys (from the Greek “chelys” for tortoise) moves with an asymmetrical gait in a very a tortoise-like manner. Its head moves slowly side to side as it walks. A clever “friction clutch security system” detects surface edges and ensures that Kelys doesn’t walk off table tops. Kelys also features a “tail switch” to stop the tortoise from moving if only the singing bird activity is desired. Kelys is mostly made of rhodium-plated brass, with a mixture of grained, satin brushed and polished finishing. Its eyes are black onyx gems, and his shell is adorned with hand-made leather scales. A circular stainless steel winding key is located on the tortoise’s belly. 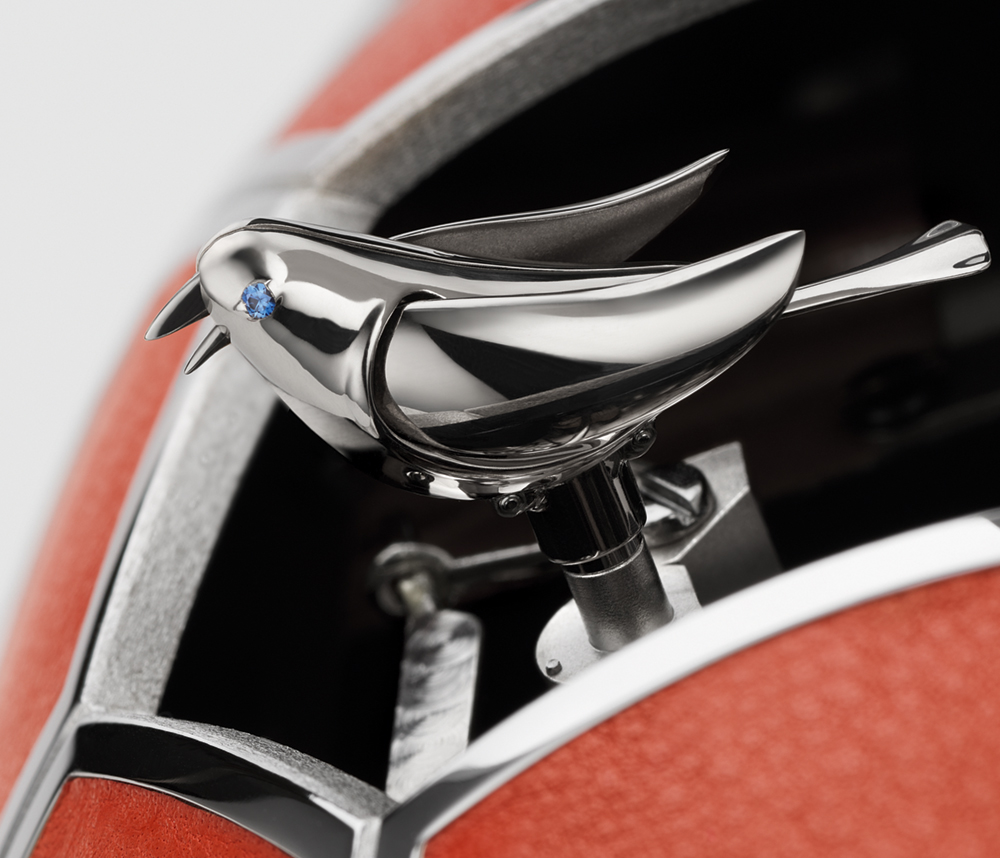 Also when activated, Chirp emerges from her “nest” underneath Kelys’ topmost scale, and flaps its wings, moves its tail, pivots from side to side, and opens and closes its beak in time with the birdsong. Chirp features a double bellows system for bi-directional air pushing, creating a song which is louder than one expects from such a small mechanism. Chirp is made of 18k polished white gold with sapphire eyes, and also features a security mechanism to prevent the movement being damaged if the bird or cover are pushed down while singing, safely retracting Chirp to its nest. All together, the MB&F Kelys & Chirp Mechanical Toy includes 480 components, all hand-assembled, and weighs approximately 1.4kg. Both mechanisms share the same twin-cam spring barrel which provides a power reserve of 3 cycles of turtle walking and bird singing. 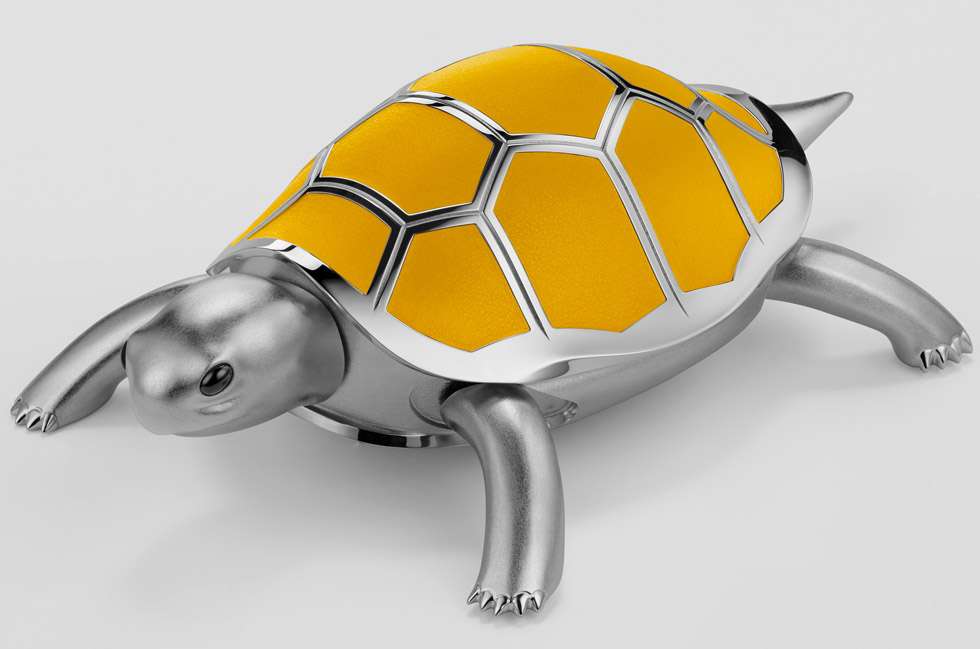 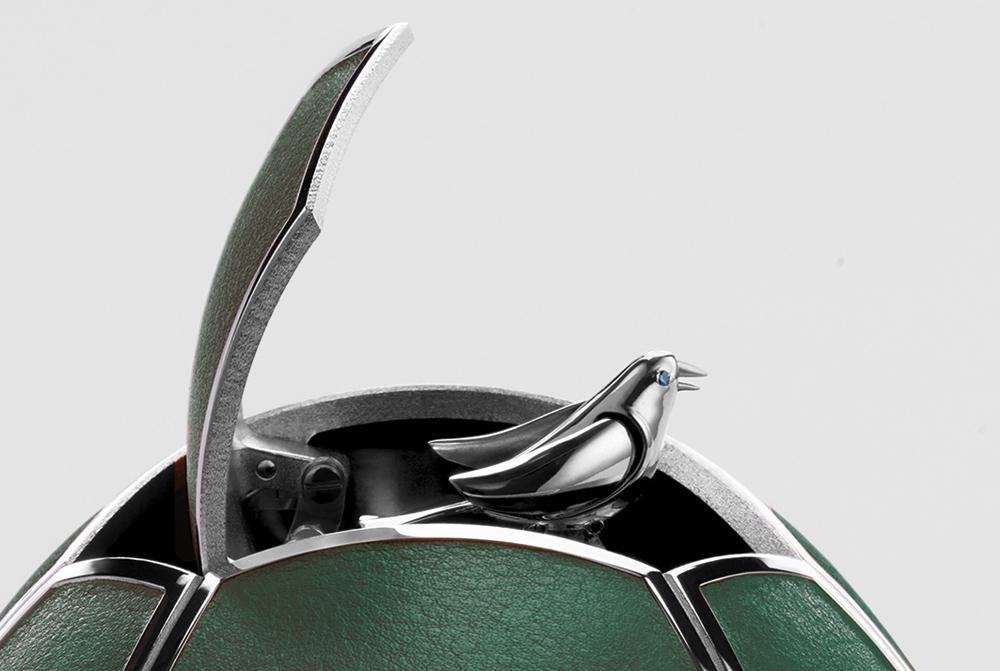 Although such clever engineering can be appreciated, the MB&F Kelys & Chirp Mechanical Toy is appropriately named; this is a highly expensive toy of the most frivolous sort. Previous MusicMachines from MB&F and Reuge could at least appeal to die-hard collectors of Star Wars and Star Trek memorabilia. Not so with Kelys & Chirp, which while finely crafted and equipped with a marvelously complex mechanism, it’s a highly expensive yet non-specific novelty item, albeit one with whimsical charm. Kelys & Chirp is available in 4 limited editions of 18 pieces each in blue, green, yellow, or ochre, with a retail price of 49,000 CHF + VAT. mbandf.com