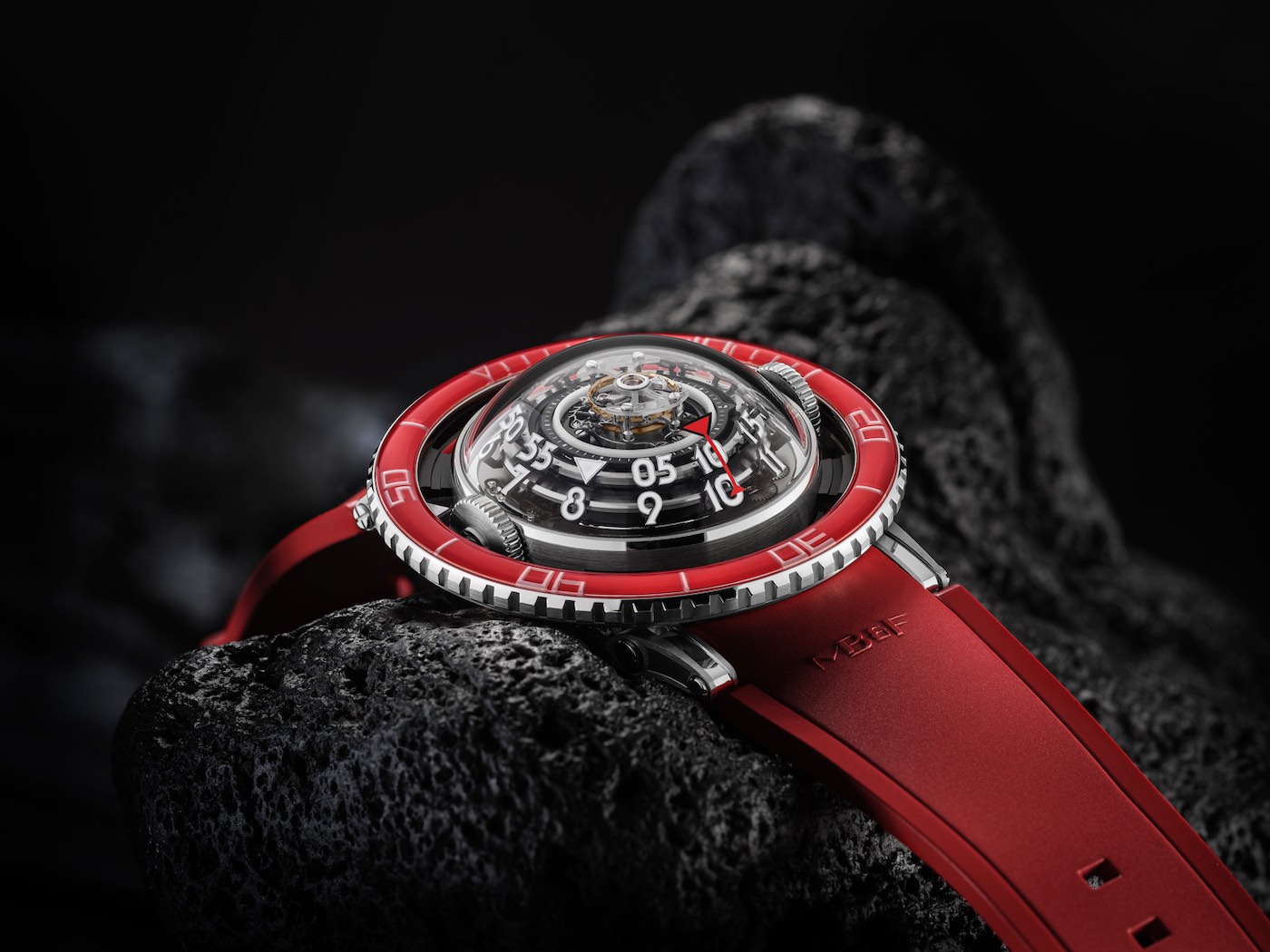 The MB&F HM7 Aquapod Platinum Red watch joins what is perhaps MB&F’s most show-stopping range. While the first thing anyone is likely to notice about the latest Aquapod is the color, there are in fact a couple of really nice upgrades to a collection that was already the epitome of excellence in the field of horology. 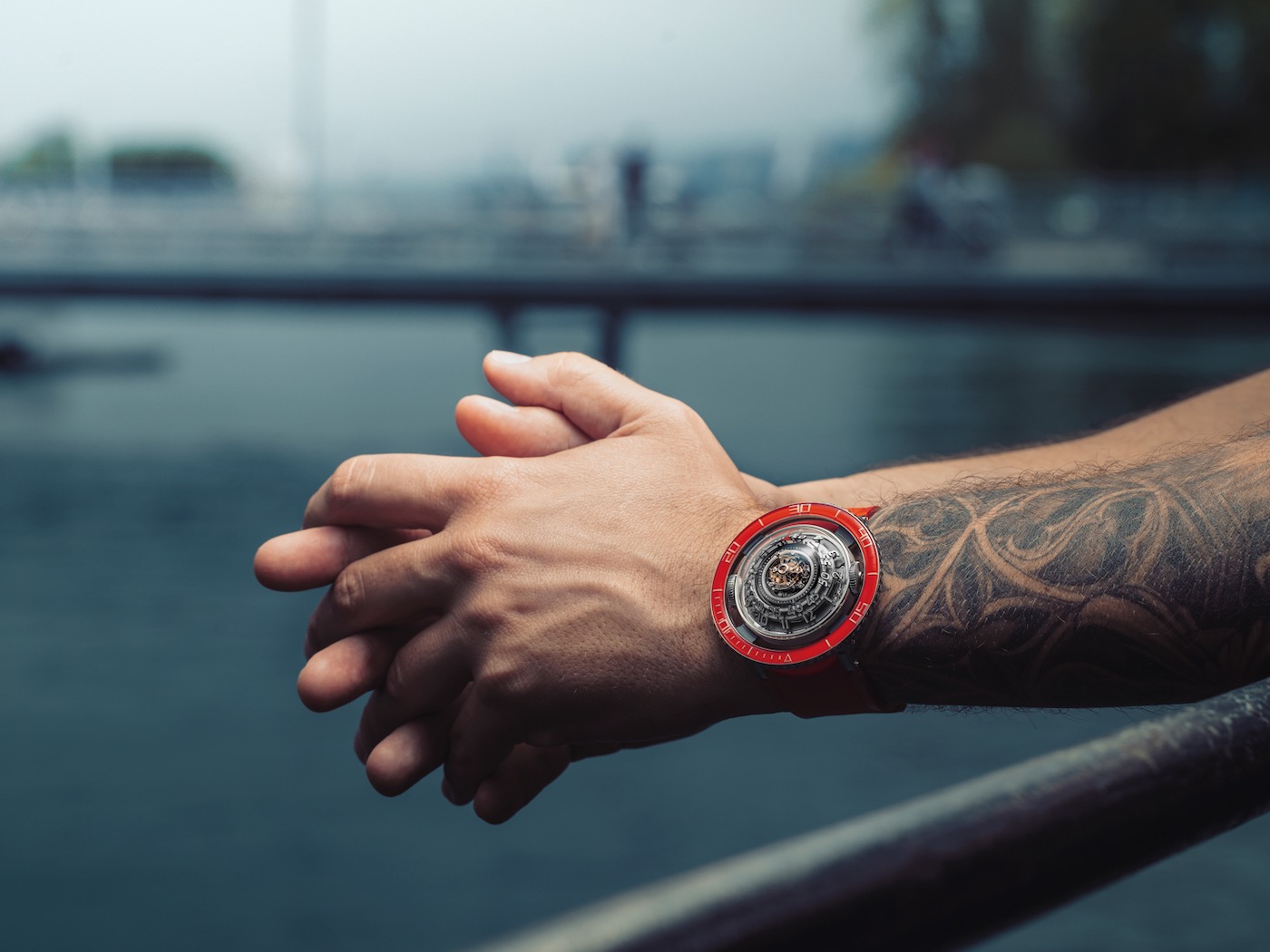 In the past, we’ve seen Titanium Blue, Red Gold, and Titanium Green versions of this watch. As the most limited model thus far, the production of the MB&F HM7 Aquapod Platinum Red is restricted to just 25 pieces. One reason for that could be the case material. Unlike previous versions, this watch is fashioned from platinum 950, which is surely going to increase the overall heft of a watch that in titanium, at least, is renowned for its lightness. 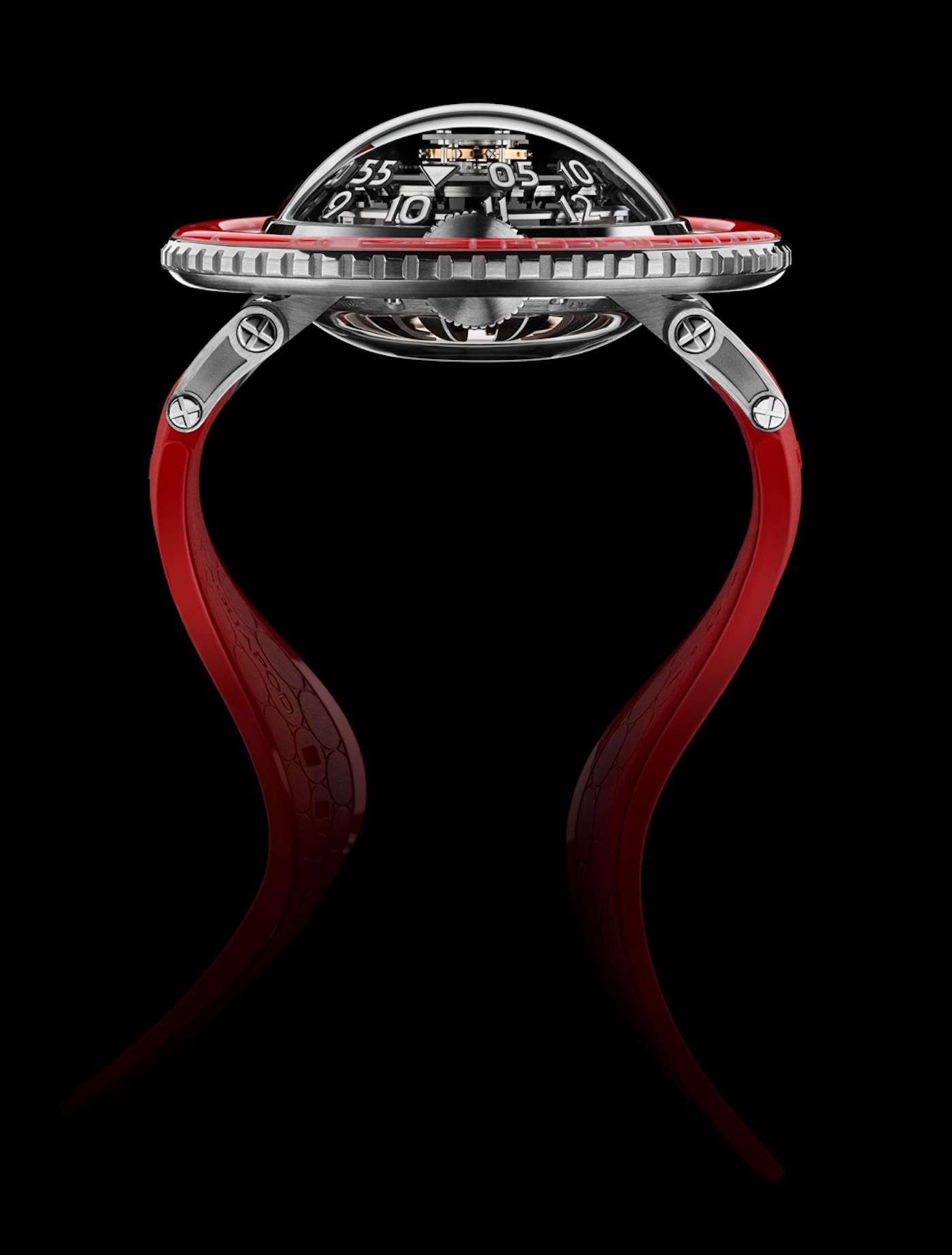 However, despite its gargantuan dimensions, coming in at 58.8mm-wide and 21.3mm-tall, the MB&F HM7 Aquapod Platinum Red is a slender, unconventional beast. Its bizarre silhouette — styled to look like a jellyfish, obviously — means that as big as it is, it isn’t all that bulky. 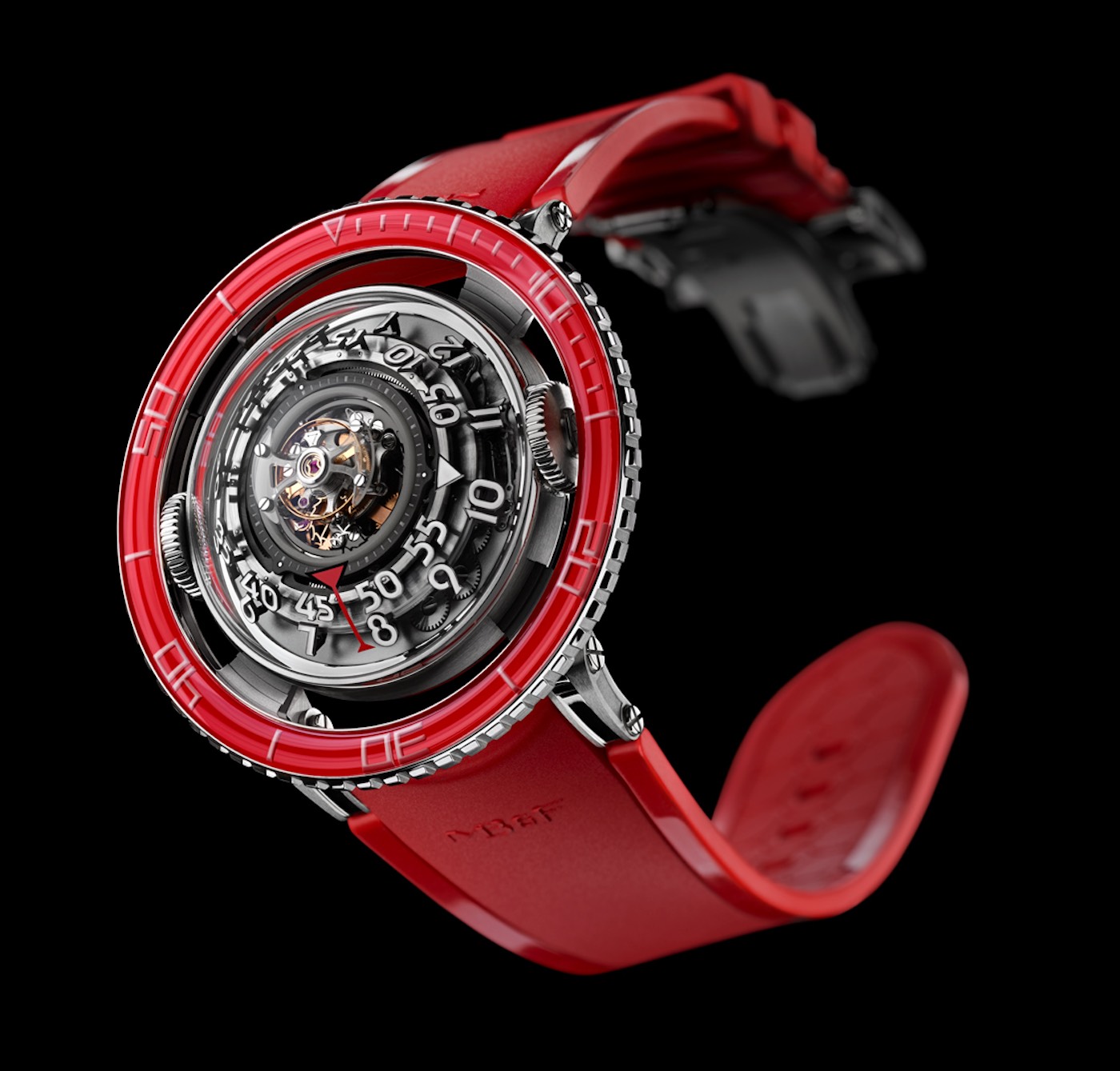 Despite its size, and its clear nautical influence, the MB&F HM7 Aquapod Platinum Red is only water resistant to 50 meters. This is exactly the same as the other Aquapods and probably the only major drawback in the design. I’m not suggesting for a second that any serious diver would actually dive with this watch on their wrist even if it were resistant to 1,000 meters, but it would have been nice if MB&F had found a way to ensure that a watch that is clearly designed to shatter our expectations of what a dive watch should look like was actually able to be used alongside the generic divers it is subverting. 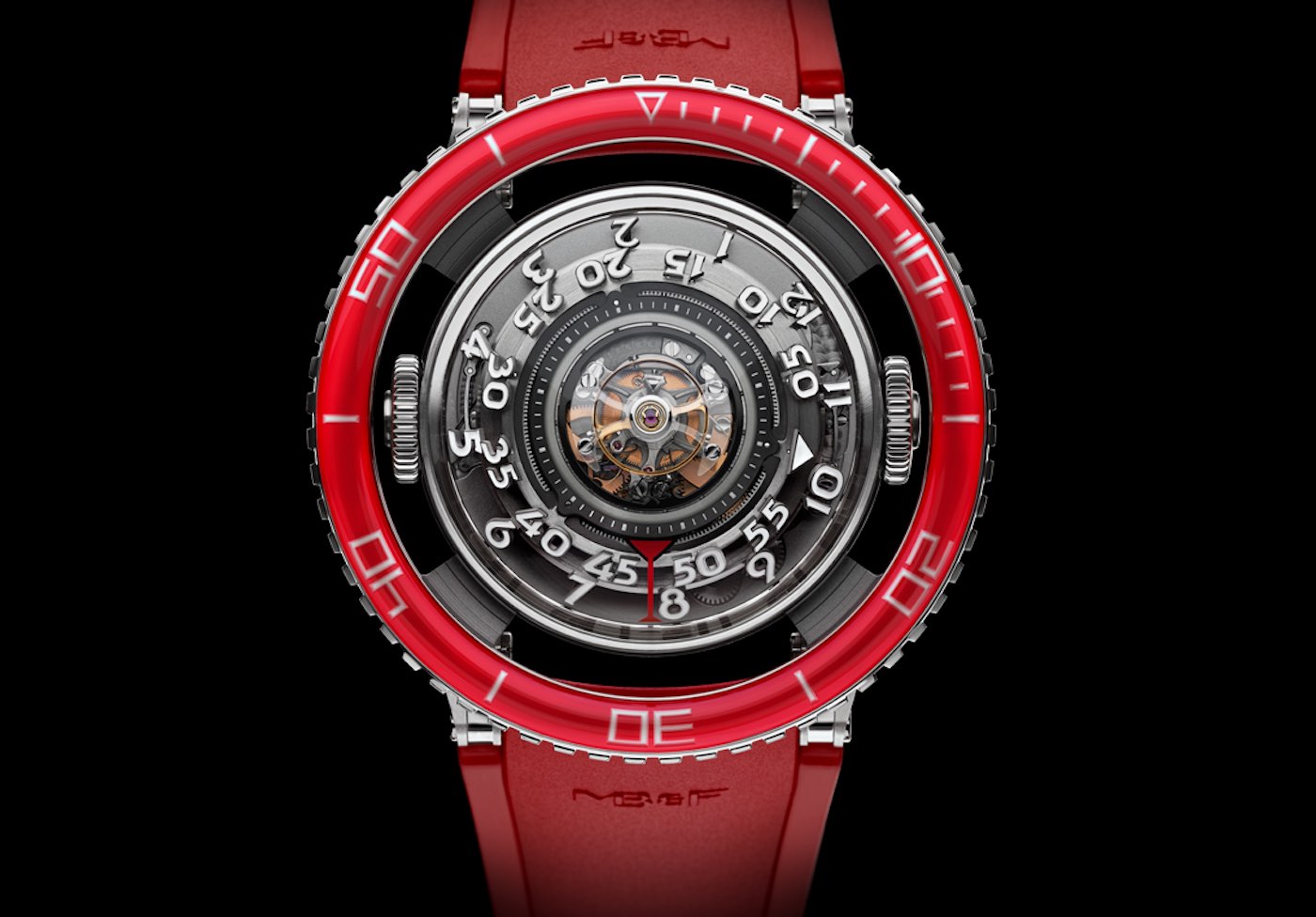 The bright red bezel is crafted from sapphire crystal that differs from the previous three iterations, which all used ceramic (in blue, black, and green respectively). It is an interesting decision to plump for sapphire here, but it does marry nicely with the steeply domed anti-reflective crystal “bubble” that displays the tourbillon in the center of the watch. In addition to the sapphire bezel, so, too, is the tourbillon bridge now sapphire, increasing the overall transparency of the watch (and perhaps making it look even more like a jellyfish). An extra ring of lume in the center picks out the tourbillon in a way it hasn’t been before. 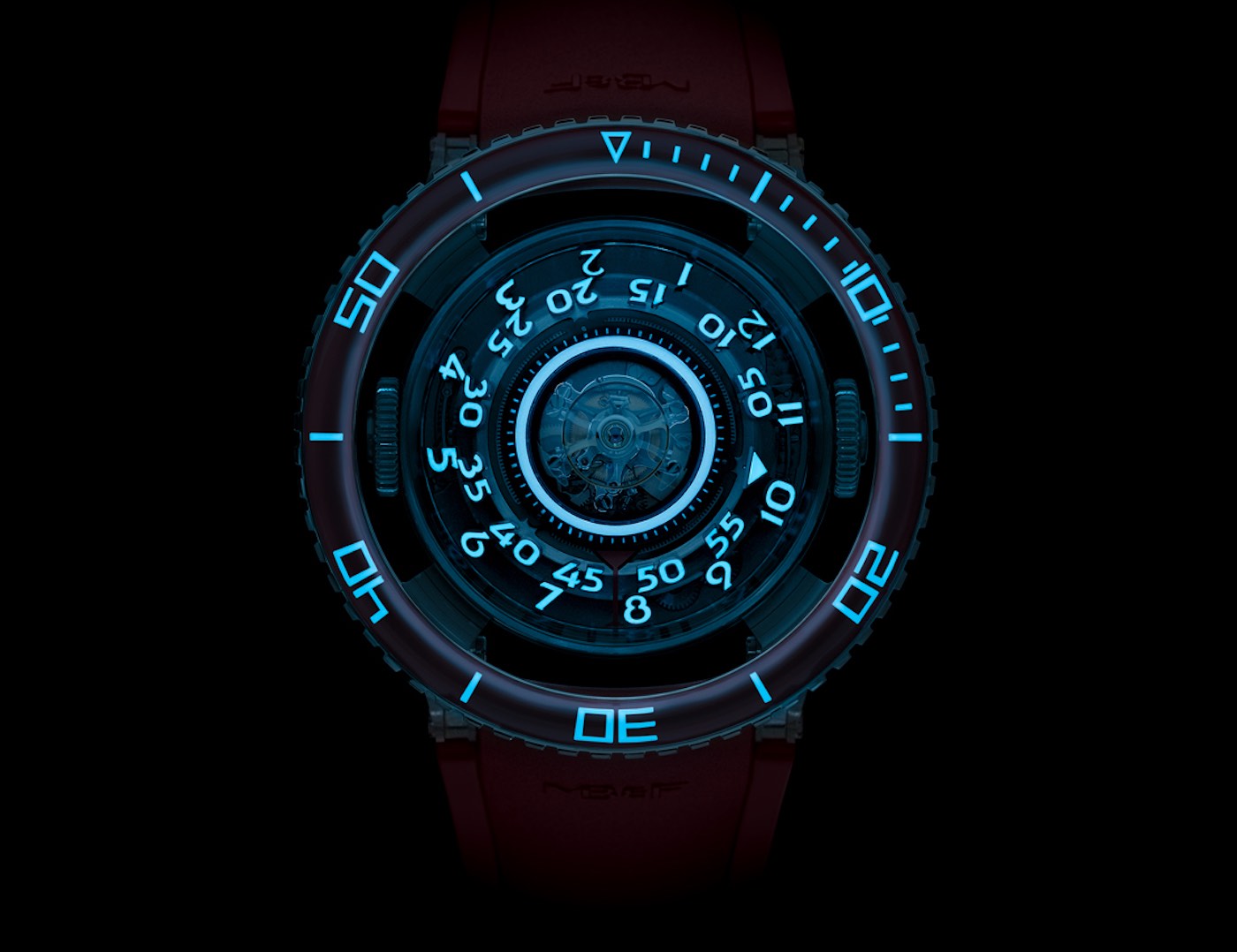 Red is an interesting choice for a dive-inspired watch. As Zach noted in his recent Citizen article, red is one of the first colors to drop out of view as you descend beneath the surface. That’s why certain species of jellyfish have evolved to have red pigmentation, as it makes them less visible to predators. Talk about the ultimate stealth luxury watch… Platinum and invisible in its intended environment. Just wow. 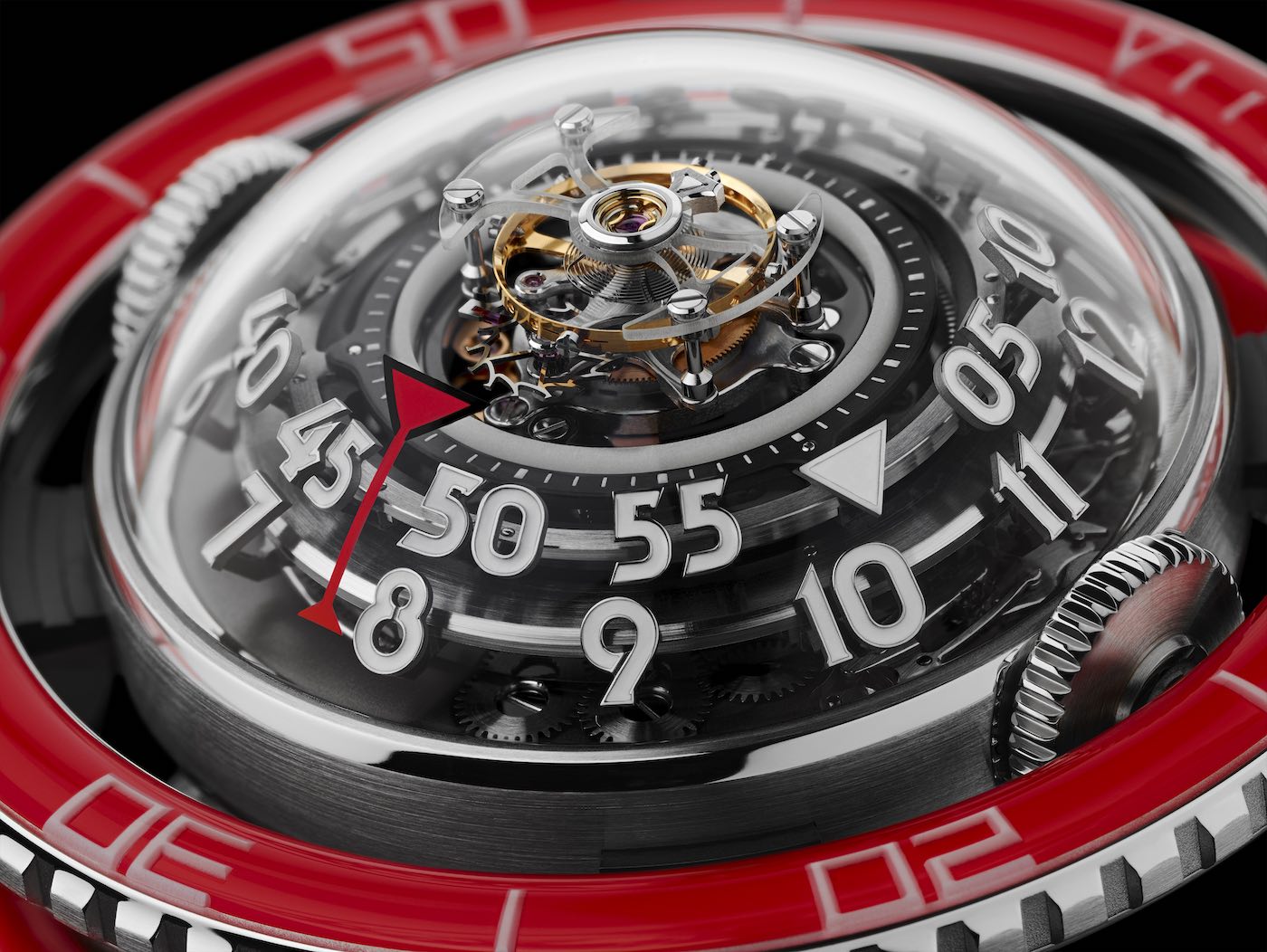 Finally, the biggest upgrade (in my lume-obsessed opinion) can be seen in the way the numerals have been crafted. Originally the Aquapod series used printed rings to display the time, but here we have glorious 3D Arabic numerals machined from titanium and generously impregnated with Super-LumiNova. It is a stunning improvement, and somehow puts the legendary light show of the previous three iterations in the shade. The new MB&F HM7 Aquapod Platinum Red watch will be delivered with three straps in red, black, and white, fitted with a platinum folding buckle. Given the use of platinum and the other obvious upgrades to this model, it is no surprise that the MB&F HM7 Aquapod Platinum Red will retail for a tasty $165,000. To learn more about Max Büsser and his friends’ endeavors, head over to mbandf.com.