Maximilian Büsser had a vision — but that’s nothing new. This is just the latest in what seems to be a life full of them, but this vision has opened up a whole new market for his company. Finally, 14 years into one of watchmaking’s most enticing endeavors, Büsser has overseen the creation of the MB&F Legacy Machine FlyingT watch, designed especially for women. 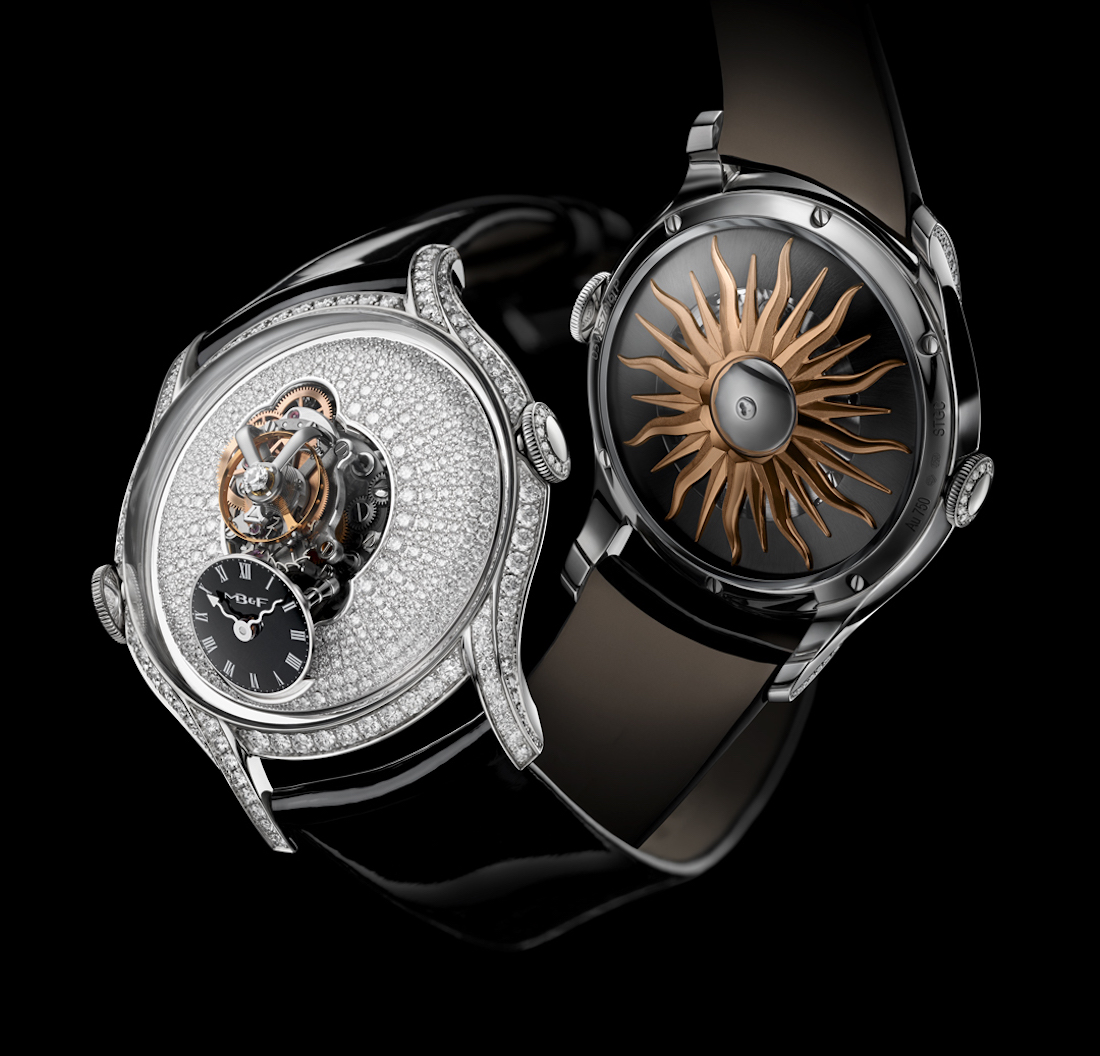 “The last thing I wanted to do, was to take a masculine timepiece, resize it, put a different color on it and call it a ladies’ watch.” ~ Maximilian Büsser

Leaving aside the notable technological achievements and dazzling array of aesthetics on show for a moment, the sentiment expressed by Büsser in the above quote is laudable and evermore relevant to an industry that can expect the consumer gender imbalance to creep toward equality in the future. 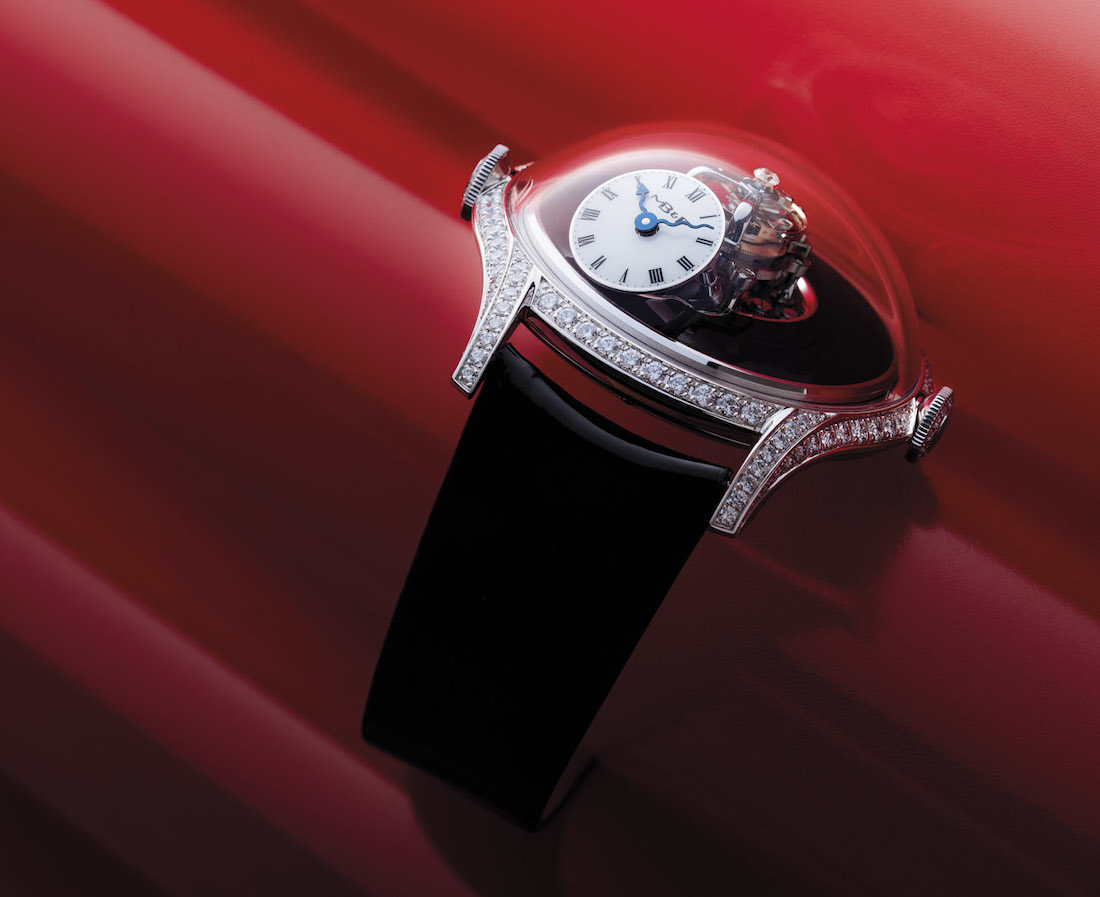 Whether or not MB&F have stayed true to that sentiment in the design of this piece, however, is not entirely free from debate. Upon first glance, the watch does appear to be a diamond-studded Legacy Machine with the only major alteration being the vertically tilted dial at 7 o’clock. On further inspection, however, it is clear a total redesign has taken place. Before the team got round to designing the interesting conical gearing that needed to be developed to drive the hands on the tilted dial, the case and high-domed sapphire needed to be correctly proportioned. And then there’s the small matter of the flying tourbillon, which is a new feature for the LM series… 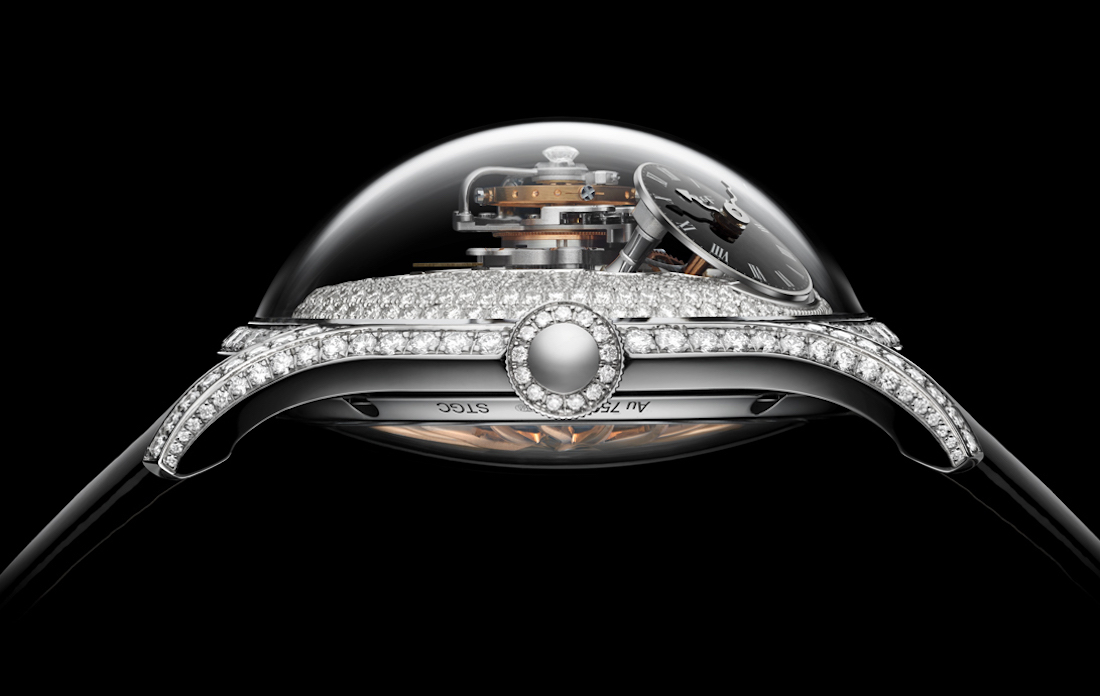 Any watch designer will tell you that size matters. To cleanly deliver a message, the amount of active and inactive space in a design is everything. And it’s not just about relative proportions; getting legibility and the correct interplay of dial elements just right is an art. MB&F understand that. The case diameter has been reduced to 38.5mm, while the dome of the sapphire has been given steeper sides. This has been done for two reasons: A 20mm total height provides enough space for the complex column flying tourbillon mechanism to fit, and it draws the attention to the sapphire. 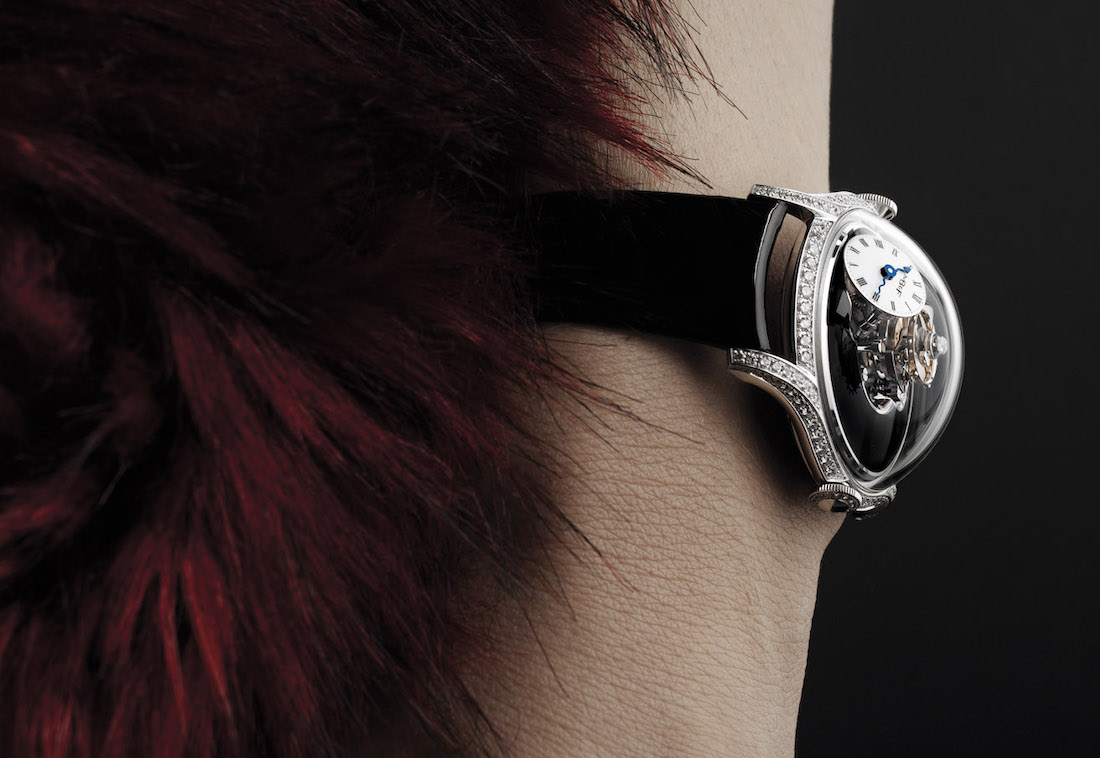 The lustrous domed sapphire is shared by all three styles. All three cases are decorated with diamonds, although one with baguette-cut stones, and the other two with paved gems. The baguette version continues the use of baguette-cut diamonds on the dial, while there are two dial options available with the paved case. Either a paved dial or a black lacquer variant can be chosen. 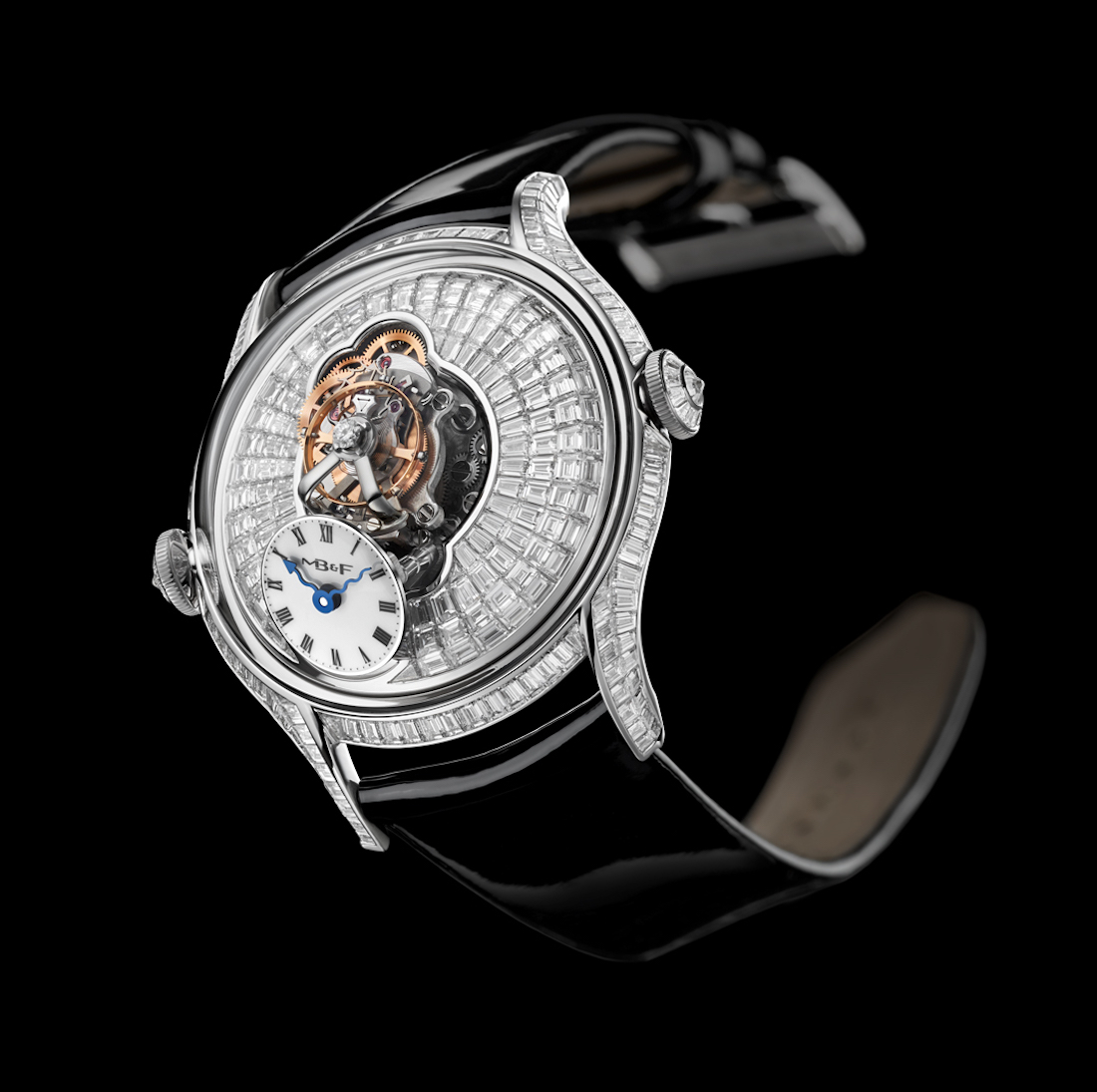 The case itself, including both the front and back anti-reflective sapphire crystals, contains 17 parts (not counting the diamonds). For symmetry, two functional crowns are included: one at 3 o’clock and one at 9 o’clock. Winding is handled by the crown on the left and time-setting by the crown on the right. 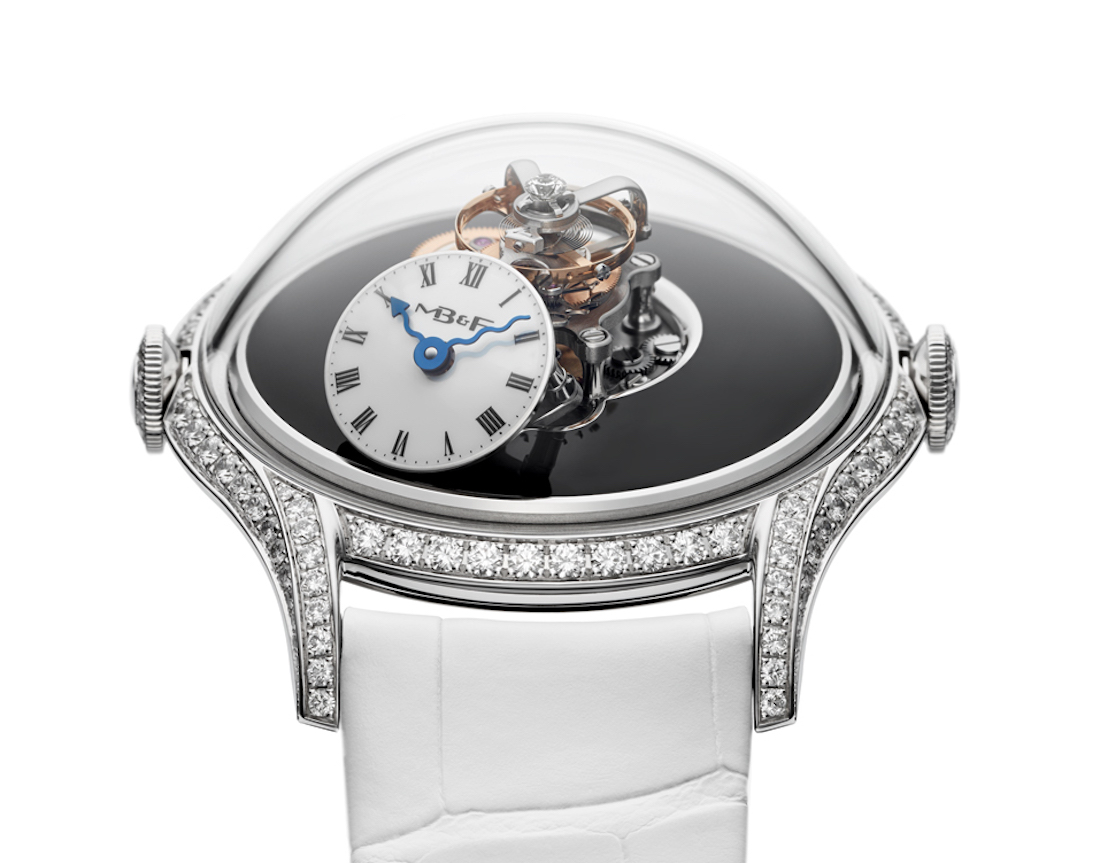 Each variant has a different number of stones, with wildly different corresponding carat weights. Perhaps this decision was made to hit multiple price-points. (As long as you fall into one of the super/stinking/filthy rich brackets there’ll be an MB&F for you.) 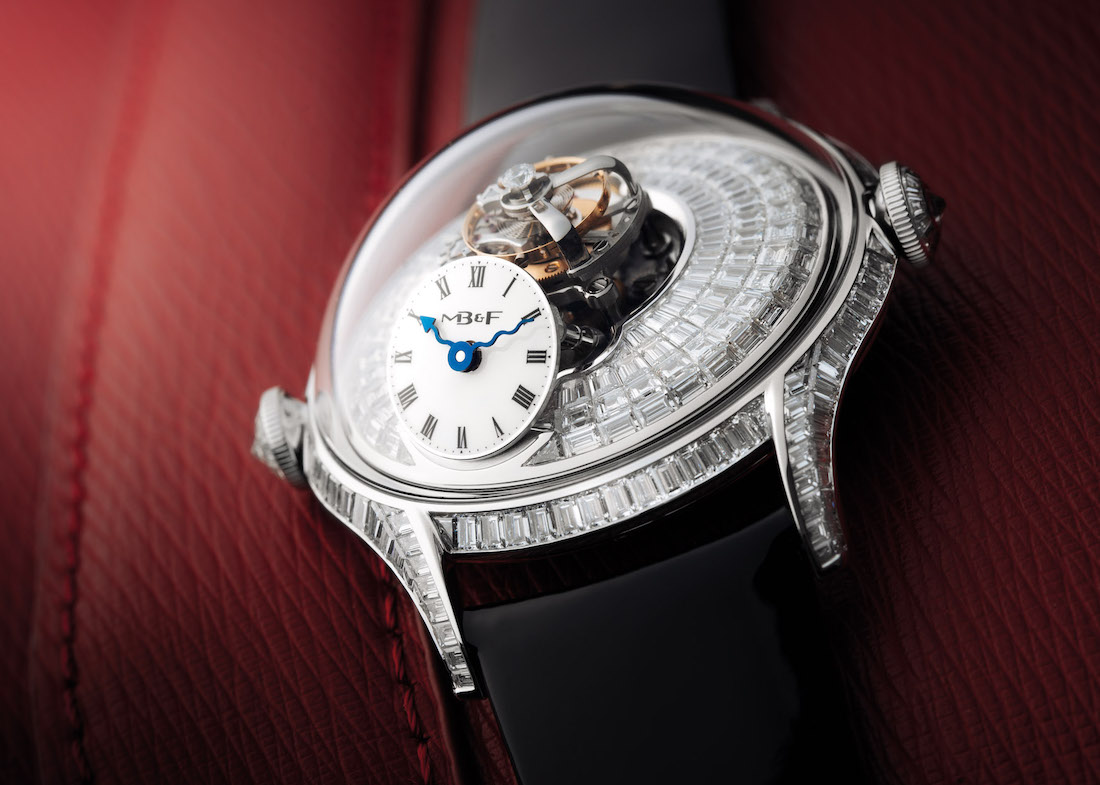 The most affordable of the trio is the black lacquer edition, which has a total of 168 stones and a carat weight of about 1.7. Next up is the paved (or pavée) diamond-set edition, which has the most stones at 558. However, the carat weight of this model is only about 3.5. That’s way behind the 8.2ct. generated by the 294 baguette diamonds on the top-of-the-range model. 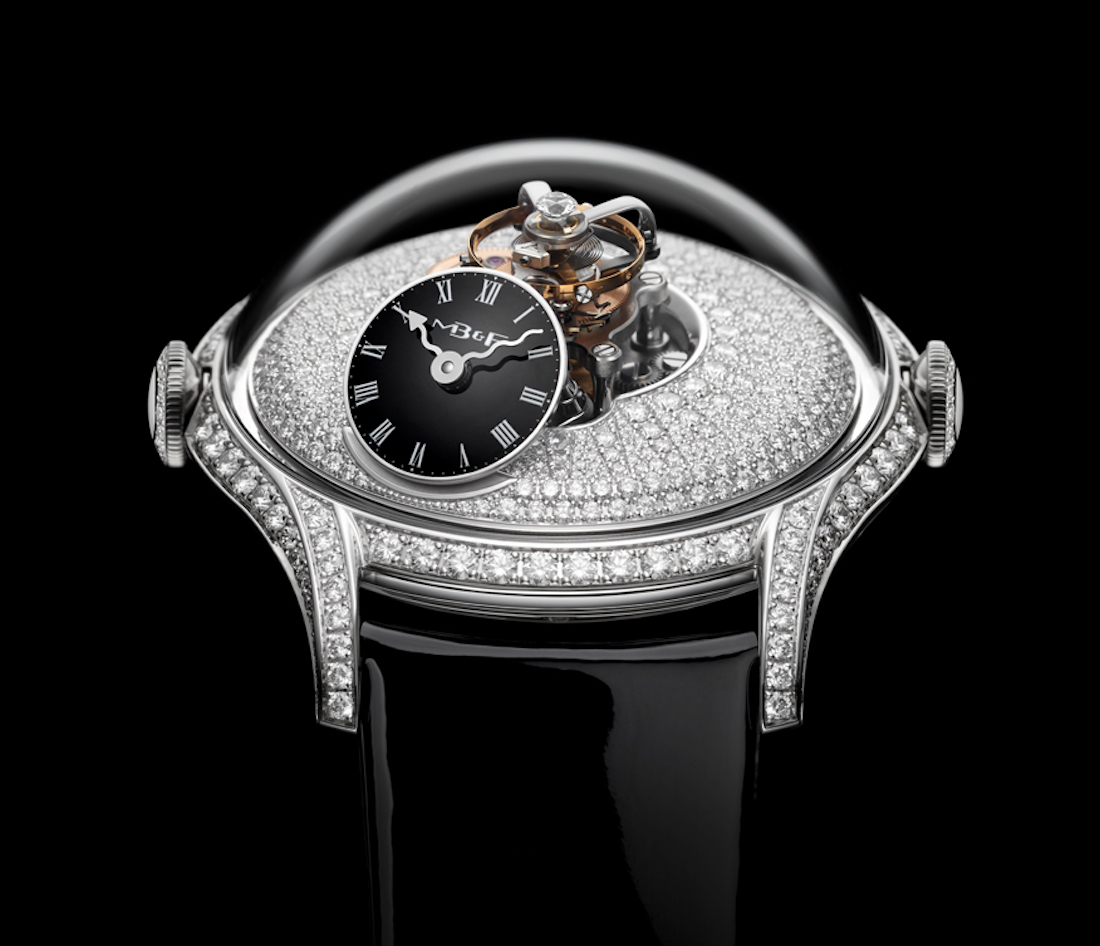 A 50° angled dial with serpentine hands displays the hours and minutes. The unusual location of the dial (at the traditional spot for 7 o’clock) has meaning. Firstly, it is a hint at discretion — only the wearer can read the time. Secondly, this piece commemorates seven years since the first Legacy Machine was released, which, itself, was released seven years into the brand’s existence. 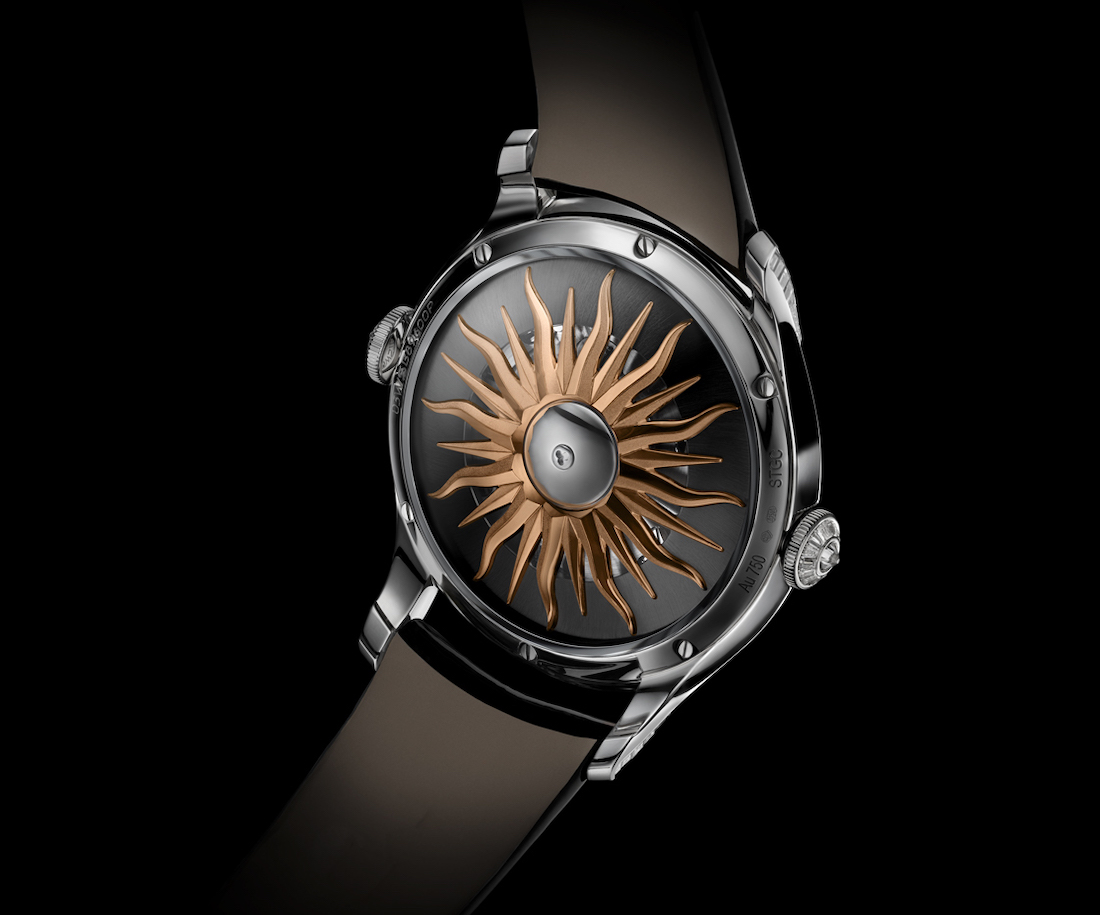 The in-house movement features a central flying 60-second tourbillon, a languid 2.5Hz operating speed, and a generous 4-day (100-hour) power reserve. The sculptural “sun” winding rotor visible through the display caseback is made of 18 karat 5N+ red gold, titanium, and platinum. It was conceived as a tribute to the women in Max Büsser’s life (as it references to the source of all life). 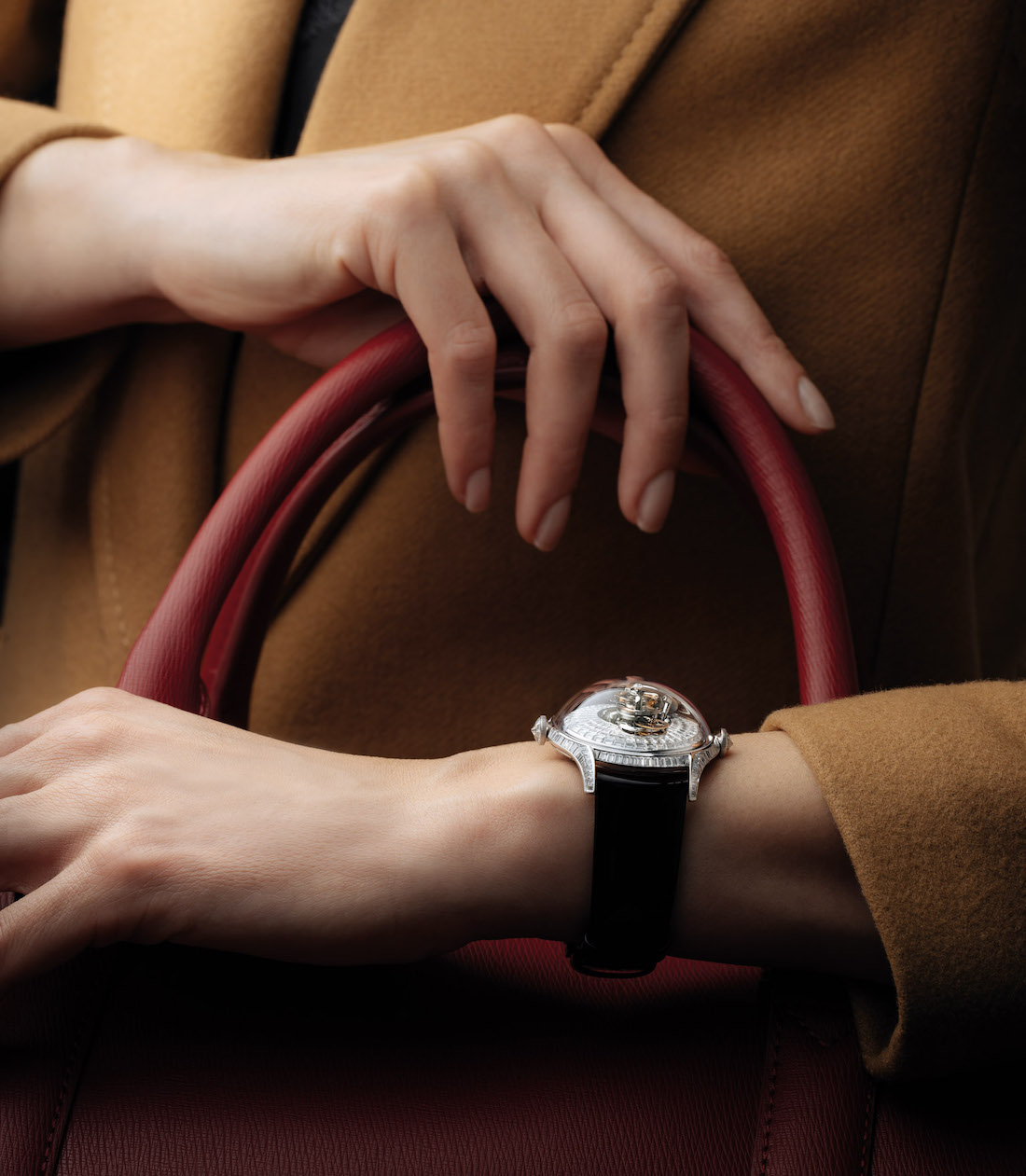 A stunning horological sculpture, MB&F has done it again. I do believe Max Büsser has come good on his ambition to make a watch for women. There will be some who think it is perhaps too similar to the existing Legacy Machines to claim such success. However, the only thing shared by the old and the new models is the layout concept. Launching a technical upgrade like a tourbillon in a piece designed for women is a really cool move. This is certainly a range for those with very deep pockets. The “entry-level” MB&F Legacy Machine FlyingT Black Lacquer version will retail for $115,000. The Paved version comes in at $145,000. At the top of the tree, the baguette version costs $315,000. All prices are before tax. Visit mbandf.com for more information.