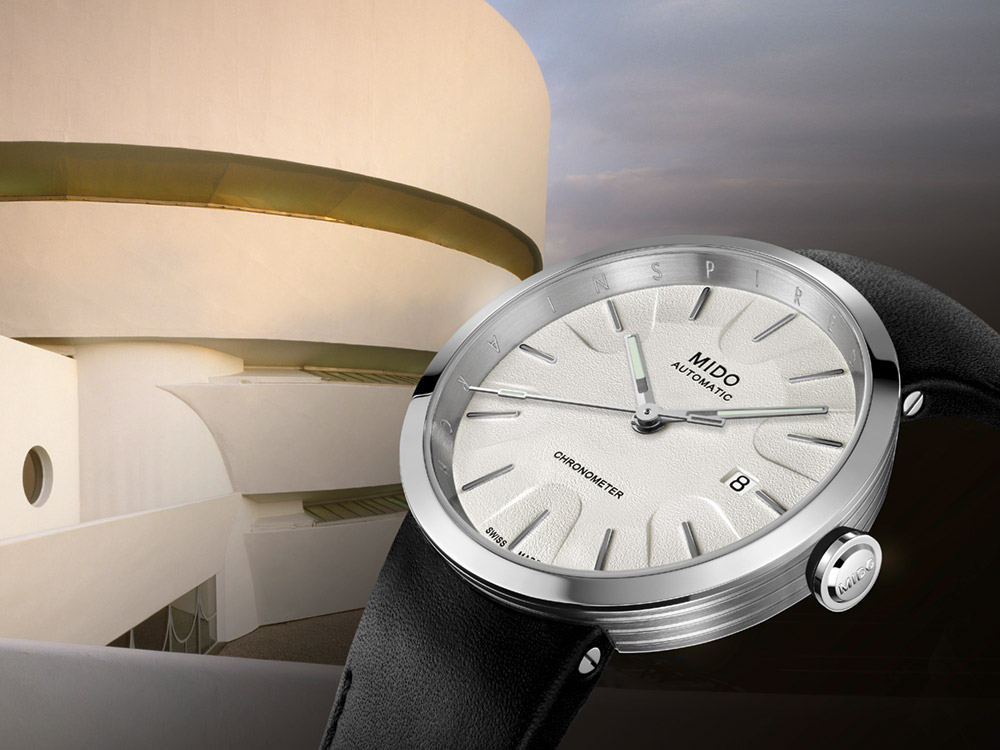 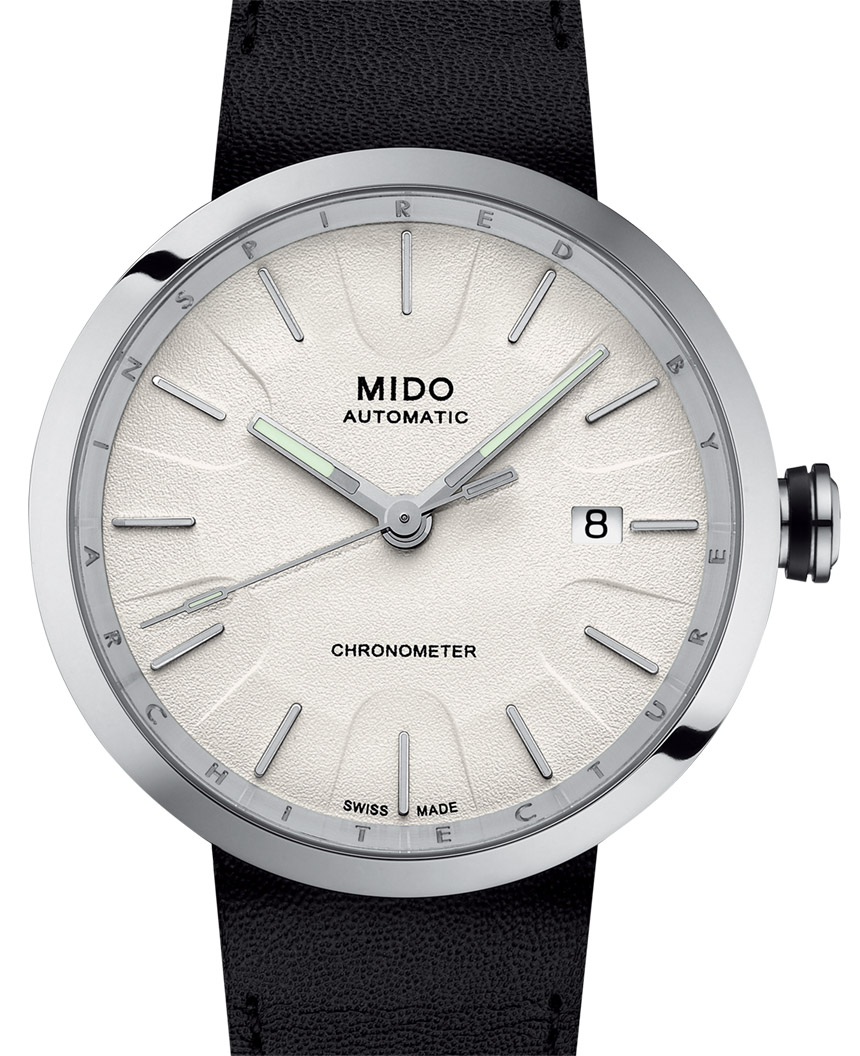 For the latest Mido watch celebrating well-known structures and landmarks around the world, the brand has introduced the Mido “Inspired By Architecture” Limited Edition with a design meant to reference the architecture of New York City’s famous Solomon R. Guggenheim Museum. The phrase “inspired by” is frequently used to explain a watch design’s concept, but this limited-edition Mido watch actually puts it right on the flange ring with the engraved words “INSPIRED BY ARCHITECTURE.” Some respectable specs including a COSC-certified movement with a long power reserve should satisfy watch snobs – but as a 500-piece limited edition, it only needs to appeal to certain groups of people who are attracted to its specific subject matter.

That could be fans of design and architecture in general or fans of the Guggenheim’s superstar architect, Frank Lloyd Wright. The lugless design of the 40mm steel case (water-resistant to 50m) fits right in with the chic “modernist” theme, and should ensure it is wearable even for narrower wrists. In Mido’s universe, this seems close to the Commander II watches or the Mido Commander Icône we recently saw hands-on here for its lack of lugs, but the case itself differs in size, shape, and other design elements and does not fit neatly into other Mido collections – while very much remaining on-brand. 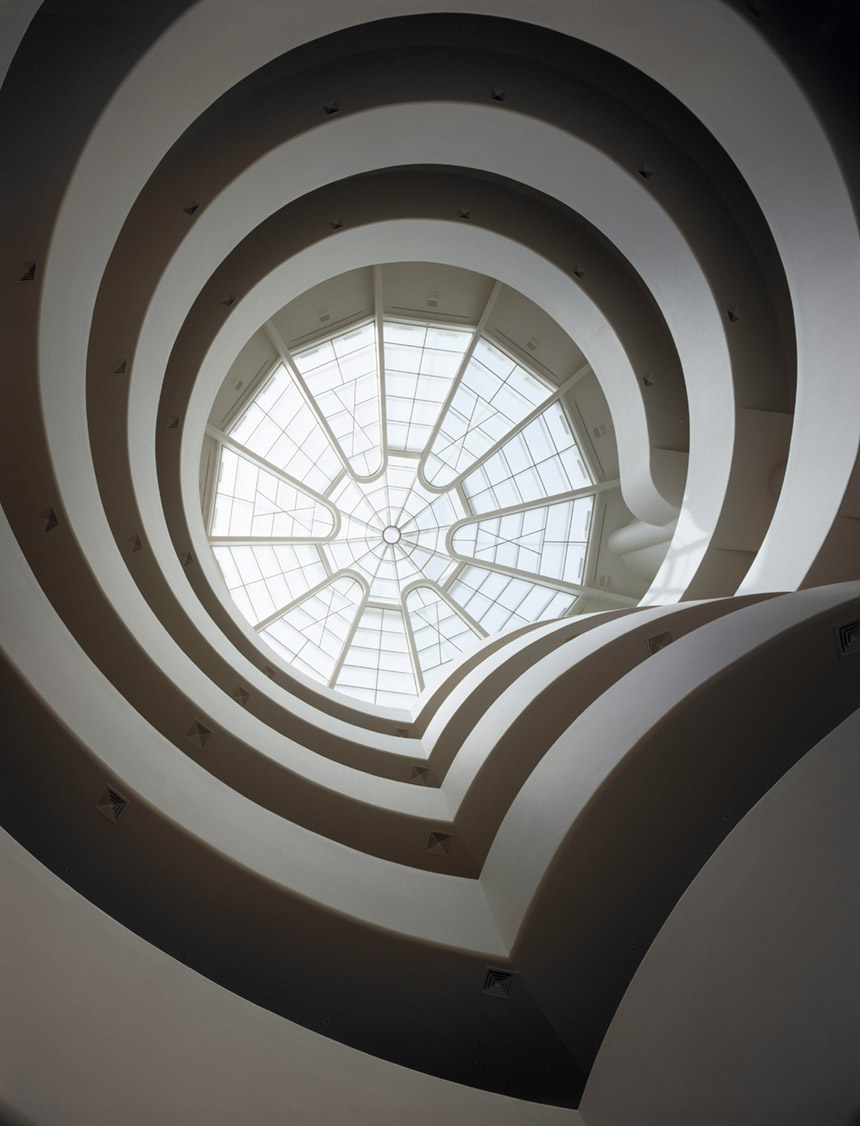 To link it to the architecture of the museum, the inward-sloping case sides feature grooves to reference the circular ribbon-like structure of the Guggenheim’s atrium, and the three-dimensional dial design references the frame of the Guggenheim’s domed ceiling (above image). The dial is in an “eggshell white” with a grained texture which should be good for legibility, and the applied indices (no lume) are polished with a satin-finished inner section. I like the hand design (all are lumed), and particularly how the seconds hand counterweight mirrors the shape on the other end. A domed sapphire crystal with anti-reflective coating (this has become something I value greatly) covers the dial, and the display caseback features a view of the movement with a customized Mido rotor, blued screws, and Geneva Stripes (sorry, no caseback pictures from Mido for now). 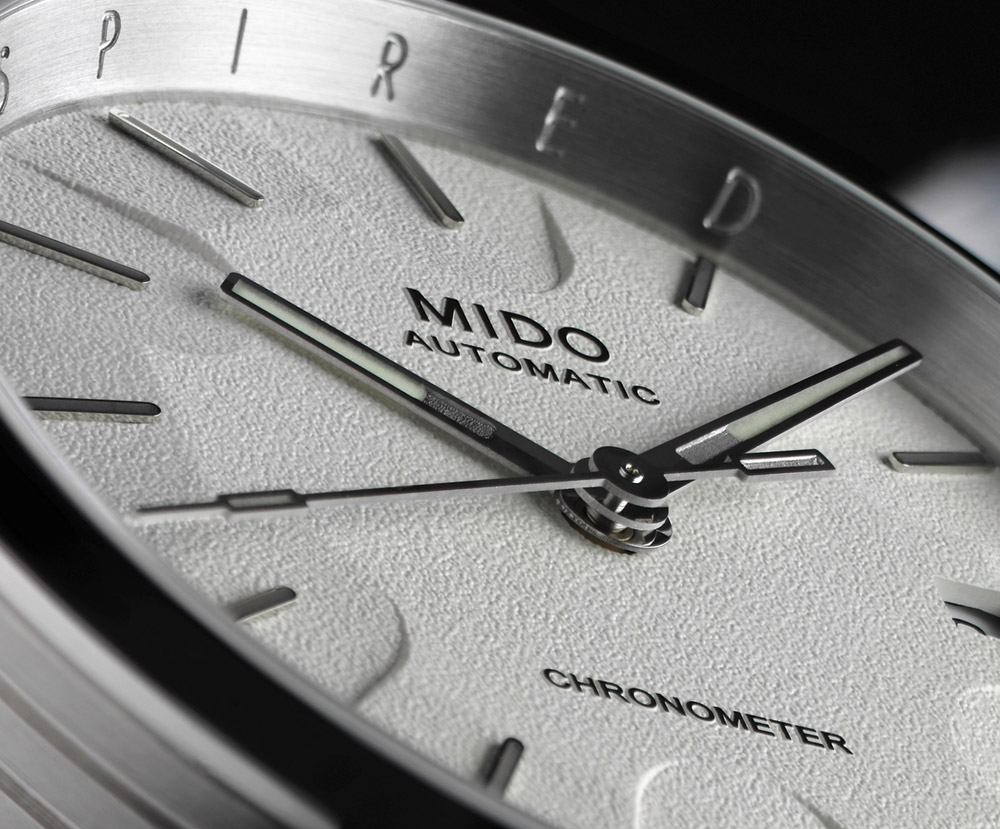 Inside is an upgraded version of the Swatch Group’s still relatively new movement that seems to have a number of versions and names depending on which brand is using it, but here it is being called the Caliber 80 Si. Movements with similar specs include the Powermatic 80 in Tissot watches such as the Tissot Seastar 1000 (hands-on) and those found in other Swatch Group brand watches such as the Rado Captain Cook recently reviewed here or the Hamilton Khaki Navy Frogman (hands-on), for example. It is an ETA movement based on the 2824 but with a number of notable modifications allowing some great features for the prices of watches it’s found in. 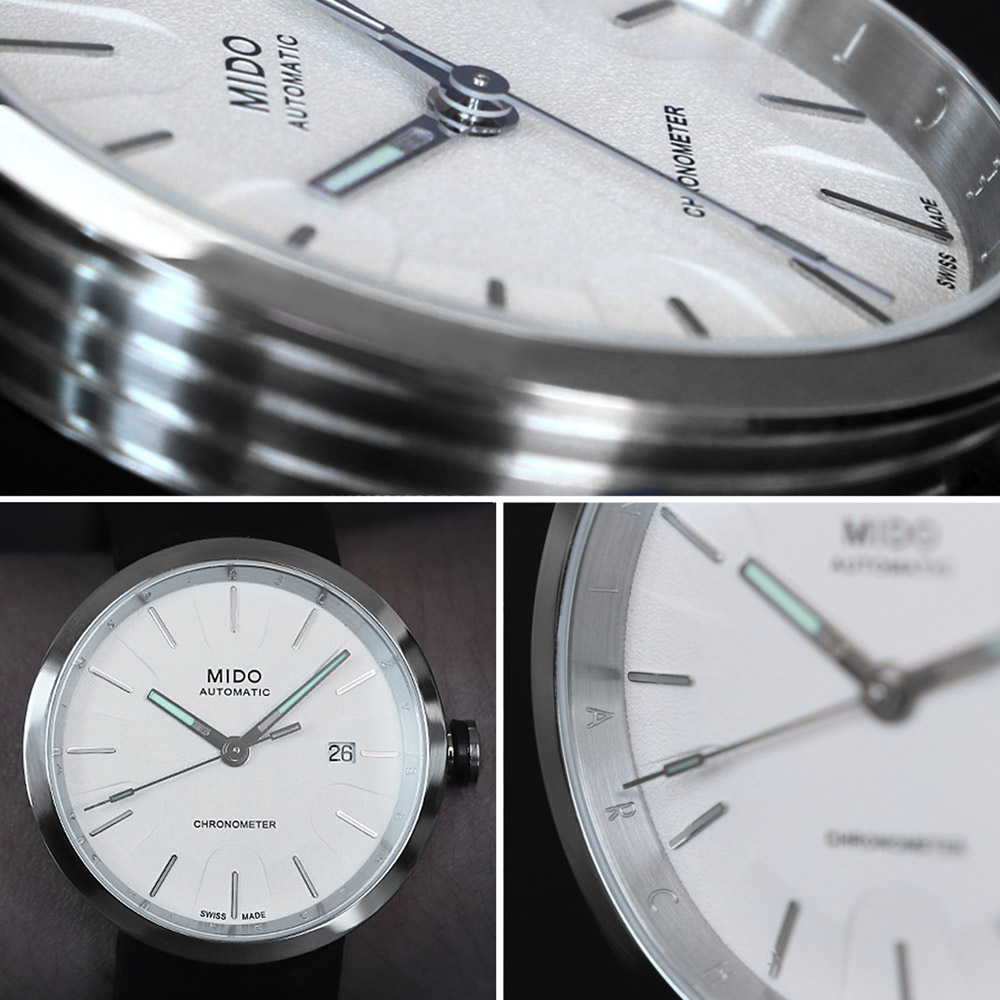 First, the power reserve has been increased to 80 hours, about twice that of the standard 2824, while its frequency has been decreased from 4Hz to 3Hz. Any concerns that this lower frequency will negatively affect accuracy are dispelled, in this instance (and other examples such as the Tissot Ballade), by being chronometer-certified by COSC to run within −4/+6 seconds per day. Even with more brands offering their own even more stringent tests and standards, as well as the average price for COSC-certified watches having come down a bit, it is still notable as a designation that has long been considered a more premium feature. A silicon balance spring, as is emphasized in the “Si” part of the name, also makes this version of the movement more premium and is something that was mostly exclusive to higher-end watches in the recent past. It is no doubt helpful in achieving better accuracy as well as offering anti-magnetic and other beneficial properties. 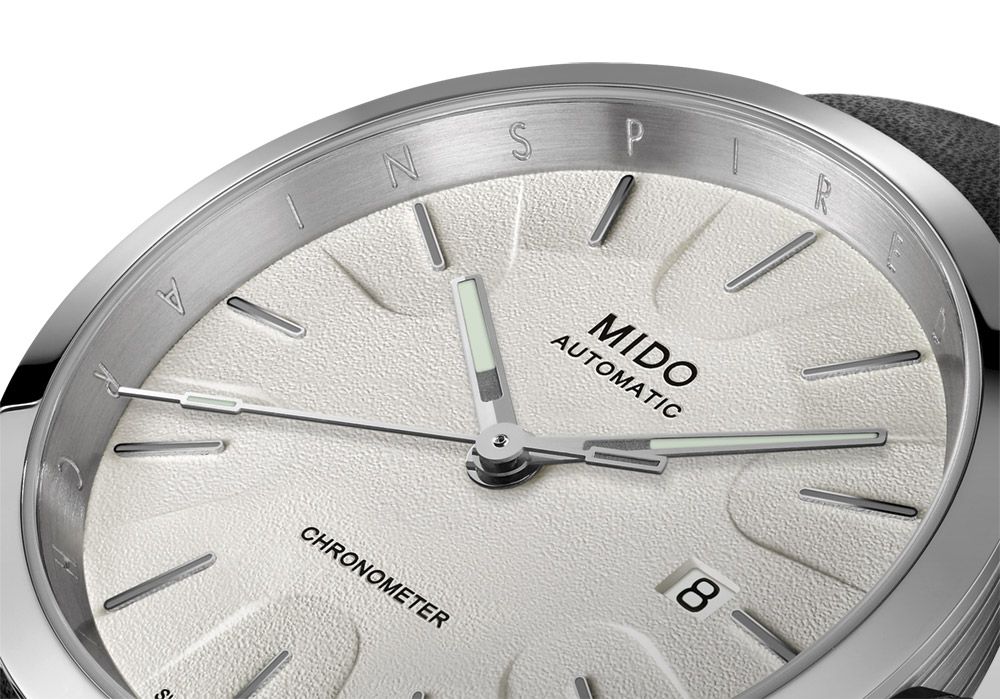 As noted, Mido has done a number of watches over the years that were meant to reference famous structures and landmarks. The idea sounds like it could easily be gimmicky, but most such watches turned out to be so restrained that you would often need to be told about the design theme to recognize any connection to said landmark. That kind of intrigued me, as well as that even the case designs were often specific to the particular theme rather than borrowed from an existing Mido model. There was the Mido Big Ben as well as the Mido Great Wall watches, for instance. 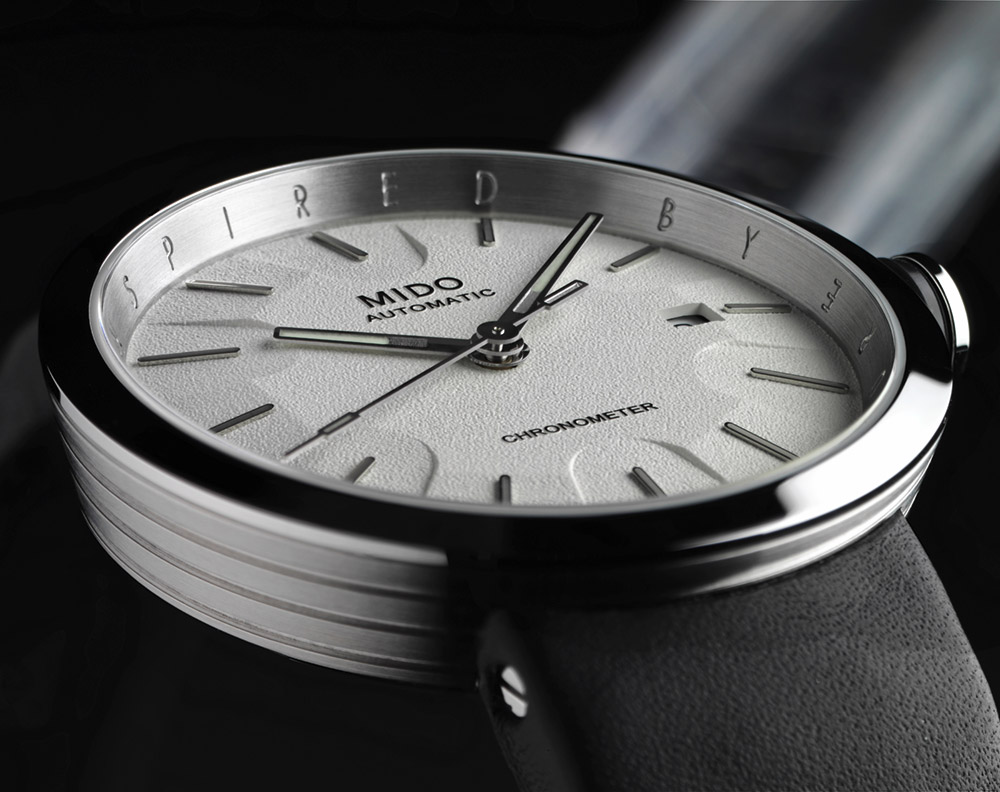 Each of the elements of the Mido Inspired By Architecture Limited Edition Guggenheim watch appear thoughtfully done, and it seems totally possible to enjoy the watch without being distracted by the text on the flange ring – I’m not usually crazy about slogans of any kind on my wrist. But if the message does particularly speak to you, then even better. Not only the movement, but the specially designed case and dial that each go beyond basic design and production requirements to incorporate more complex elements, and that might have contributed to the price. The Mido Inspired By Architecture Limited Edition watch will have a price of $1,590, available on the Mido e-commerce site, and limited to 500 pieces. midowatches.com