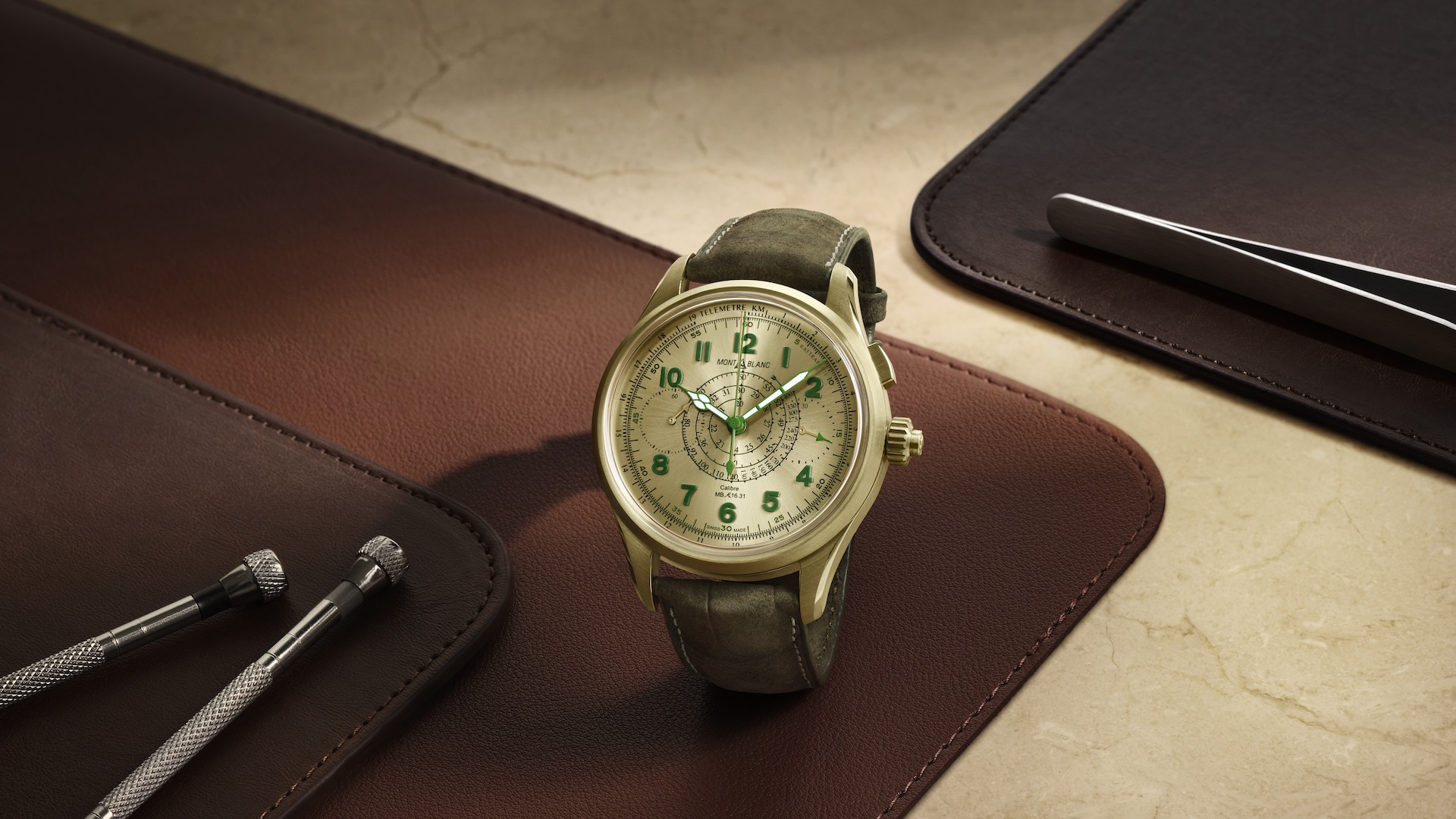 The Montblanc 1858 Split-Second Chronograph has fascinated me since its release back in 2019, and just released is this new limited-edition model in a brand new “Lime Gold” case. Lime Gold is an alloy composed of 18k gold, silver, and iron that results in a subtly faded tone that has hints of yellowish-green. Limited to just 18 pieces, the 1858 Split-Second Chronograph in lime gold is the latest creation from Montblanc’s Minerva factory that low-key produces movements on par with the finest from brands like Patek, the major indies, and Montblanc’s Richemont stablemate A. Lange & Söhne. 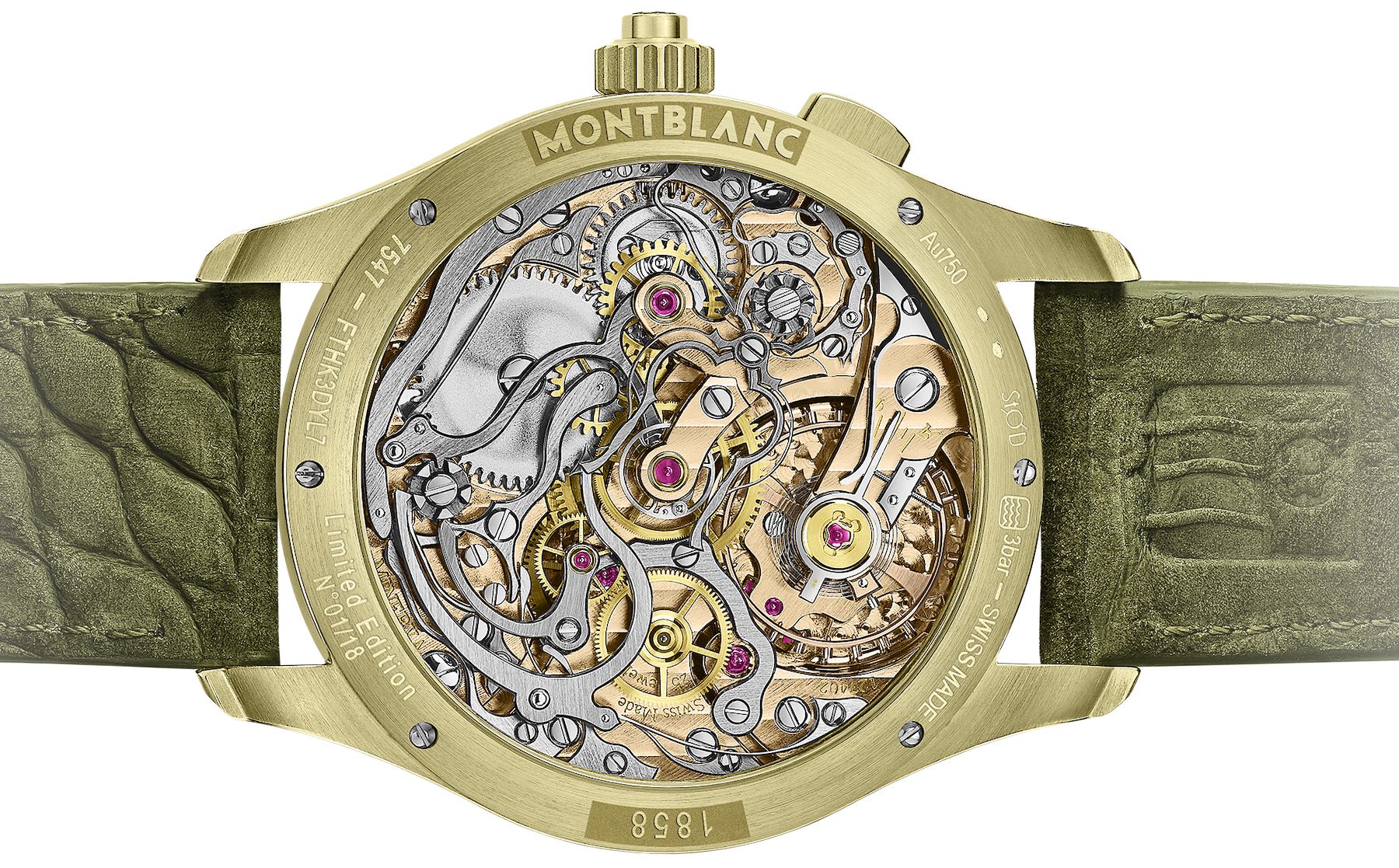 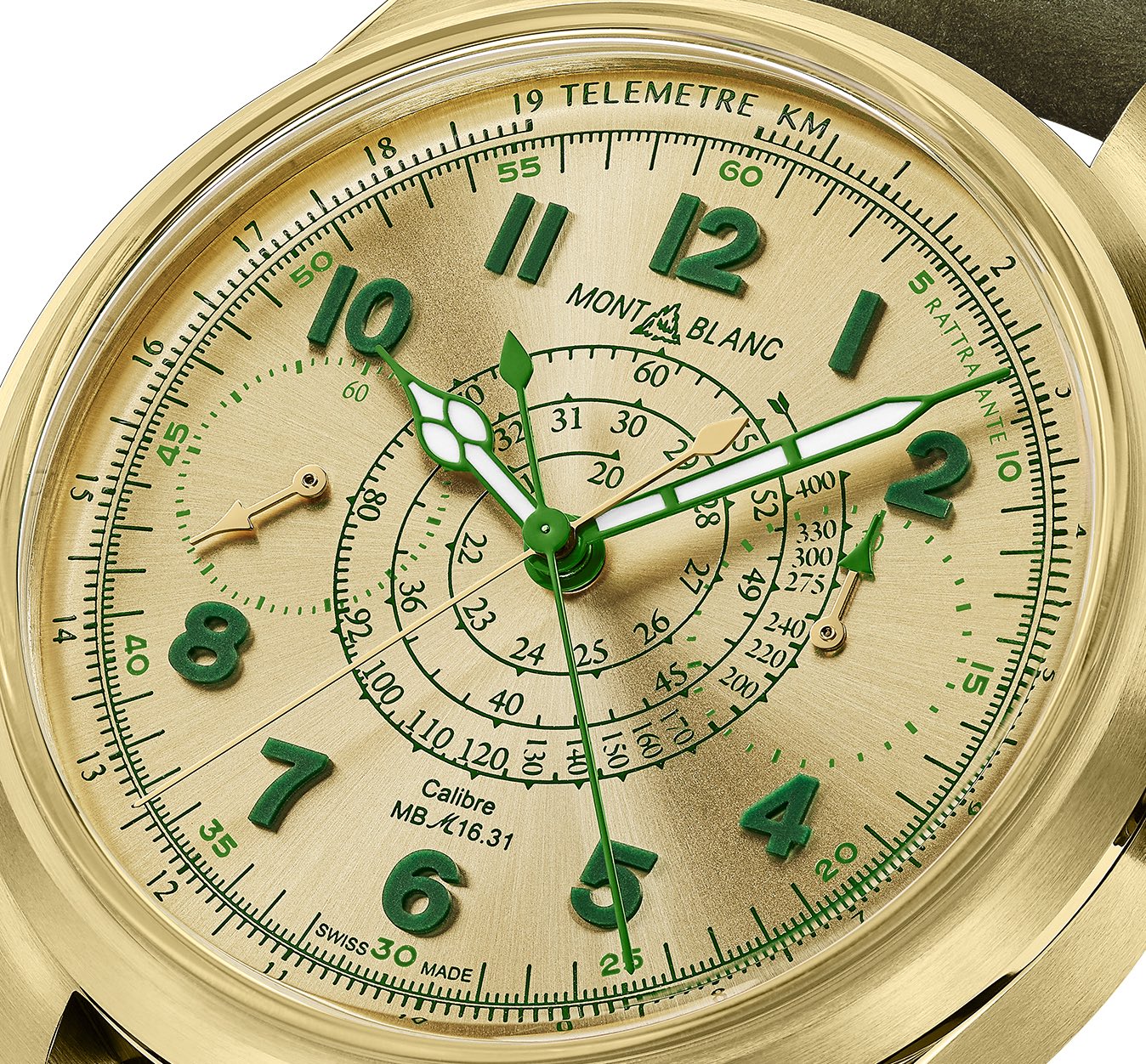 There was an iteration of the 1858 Split Second Chrono released last year in titanium with a blue dial (that flirted with purple, to my eyes), but I think this Lime Gold is a more suitable material. While I’m certain we will be seeing in-the-metal shots of this piece by the time this article publishes, I have to reserve my judgment on the lumed green Arabic numerals and green-colored hands. While some may be a little turned off by it, my early instincts say that the green against the gold sunray dial could be something to behold especially in the right lighting. Interestingly, the green Arabic numerals are fully made of Super-LumiNova that is done using a patented process that creates a borderless “monobloc” shape. This means there is no outline on the lumed numerals, which is actually pretty cool.

Unchanged from previous iterations, the dial is still a melange of delightful idiosyncrasy that could be mistaken for gimmicky if it weren’t underpinned by a horological powerhouse. The outer telemetric scale allows you to measure the distance of a phenomenon that is both visible and audible (like lightning and thunder) and, at the center of the dial, you’ll see the eccentric snail-shaped tachymeter that allows you to measure events as long as three-minutes, as opposed to the typical one-minute. 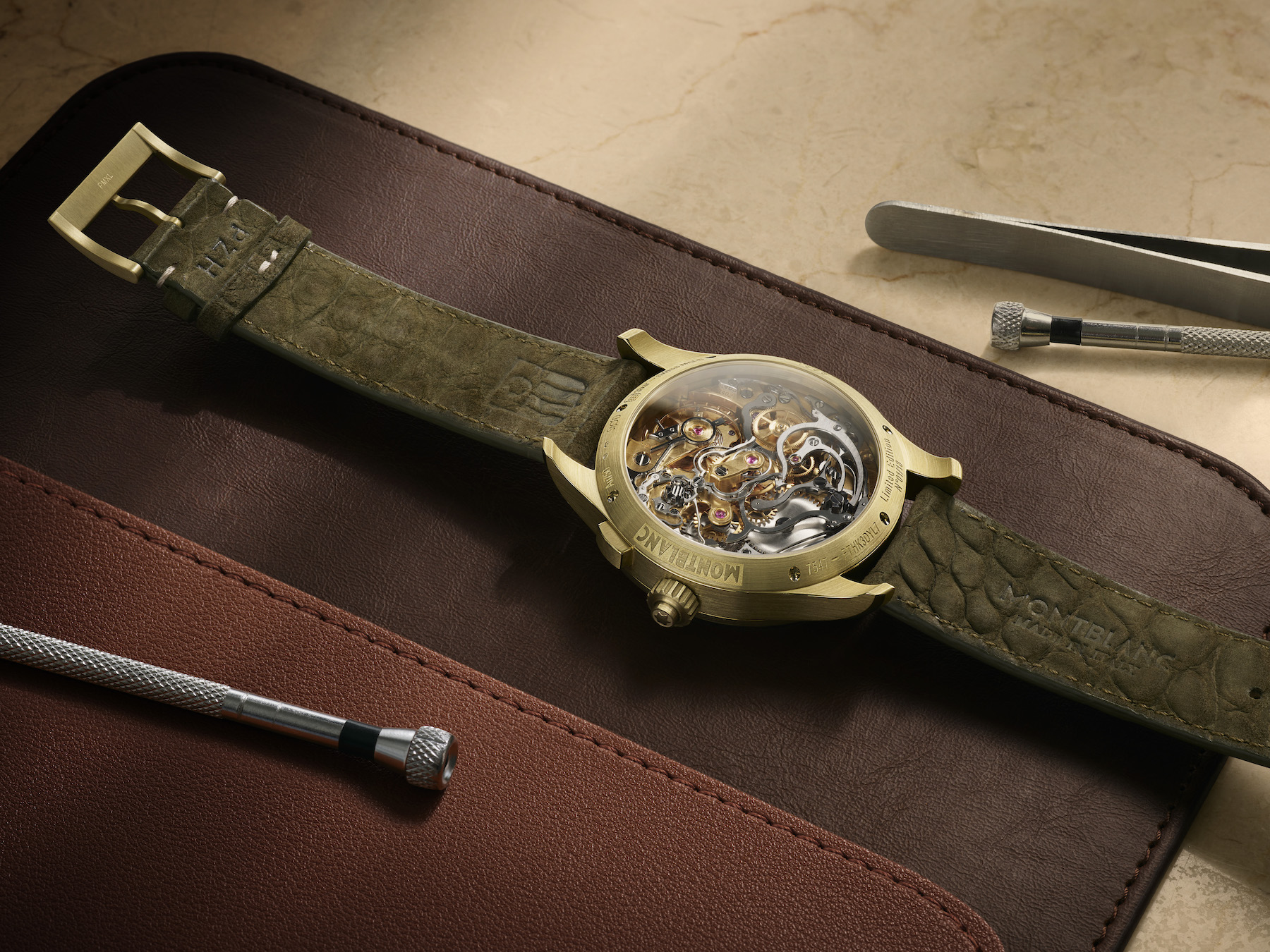 A rattrapante, AKA split-seconds chronograph (let alone a monopusher split-seconds chronograph), is up there with the most intricate and difficult complications to produce. Very simply, a rattrapante allows you to measure multiple intervals that begin at the same time but end at different times. A common use for this would be timing laps. Is it as sexy as a perpetual calendar or minute repeater? I don’t think so, but the watchmaking behind it is just as impressive, and only a handful of brands even produce them. The latest from Patek that I covered is something like $250,000 and Lange’s 1815 Rattrapante is somewhere in the $150,000 range. 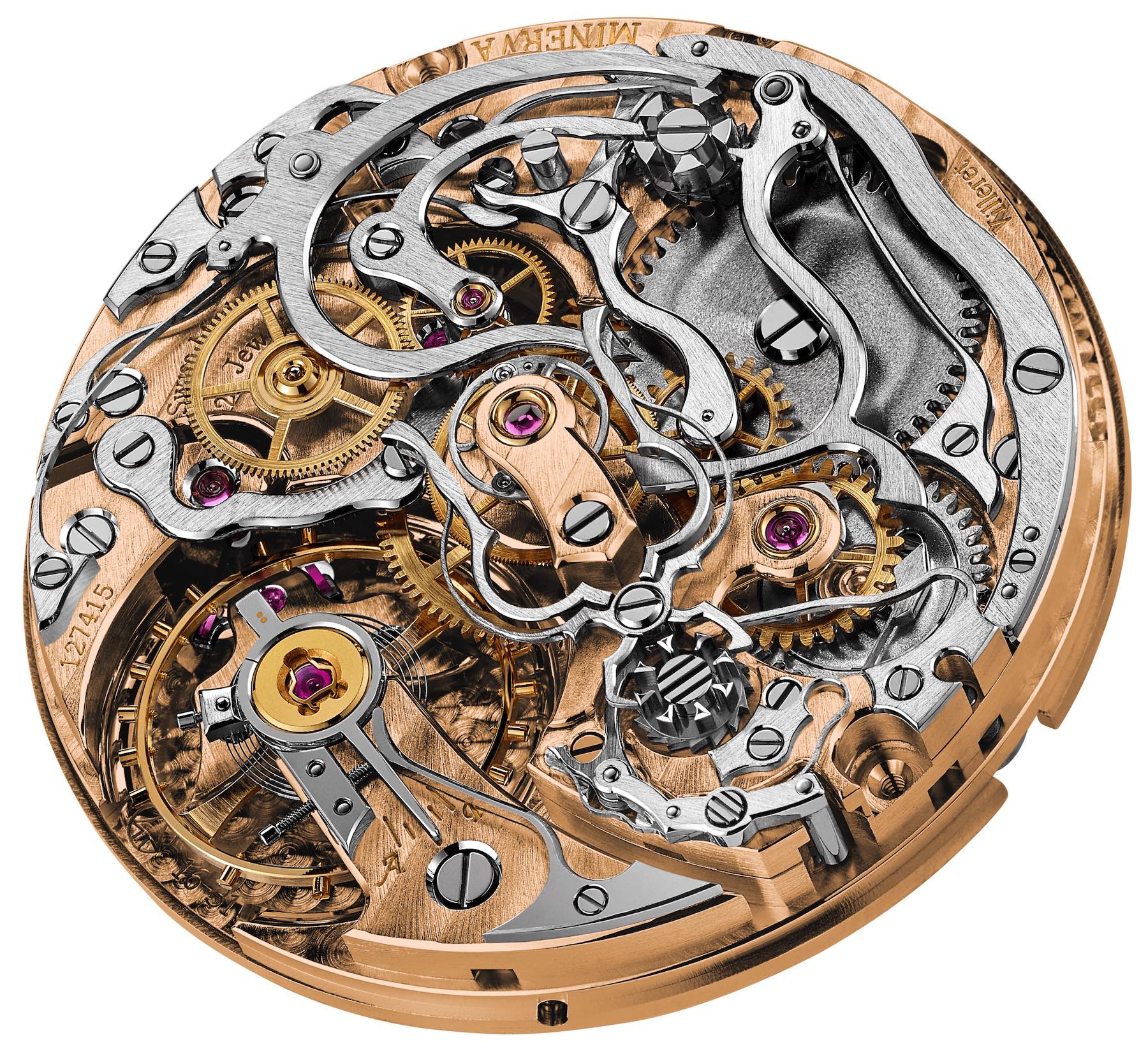 Produced in the Montblanc Manufacture in Villeret fka Minerva, the Montblanc Caliber MB M16.31 is really a pocket watch movement adapted into a wristwatch. In fact, the size of the substantial 38.4mm-wide, 8.13mm-thick movement necessitates the “post-holiday season” bloated size of the 44mm-wide, 14.2mm-thick case.

At the end of the day, it’s an irrelevant criticism because the movement is why this watch exists. An absolutely beautiful in-house manual-wind caliber, the MB M16.31 is a visual feast of German silver coated in 18k gold especially for this limited edition, circular graining, Geneva Stripes, sharp internal angles, that V-shaped bridge, 25 rubies, and one Philipps overcoil balance spring. It operates at 18,000 vph and has a 50-hour power reserve. 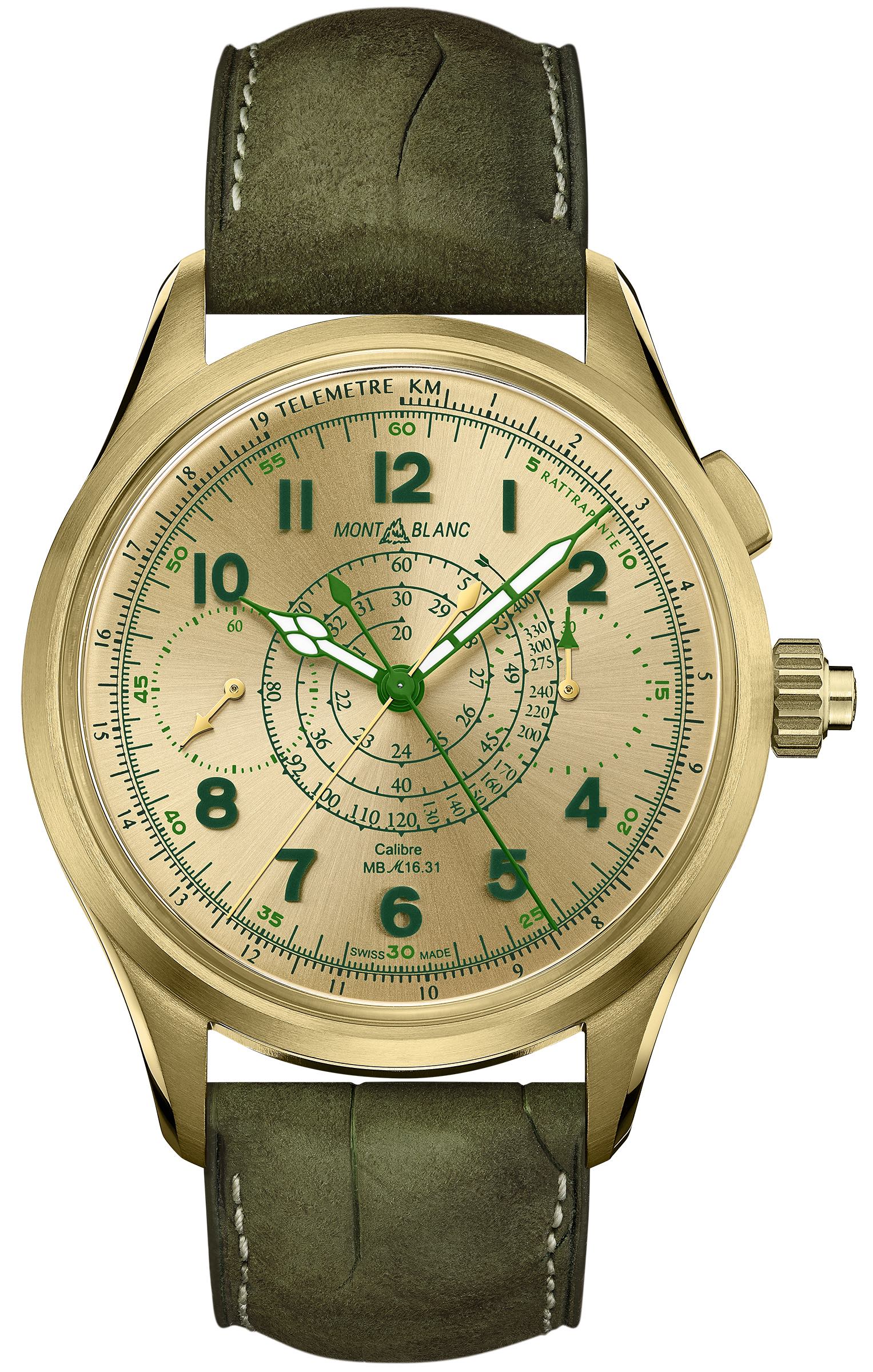 The absorption of Minerva into the Montblanc Manufacture was a real coup for Richemont and the 1858 Split-Second Chronograph is work of horology only a handful of brands could hope to produce. The new Lime Gold case and green dial touches are design choices that I’ll feel much more comfortable judging in the metal, but I really do like the use of a gold dial here and want to see more of it. Seen here with a green nubuck alligator leather strap, the Montblanc 1858 Split Second Chronograph in lime gold is limited to 18 pieces with a price of $50,000. It’s a lot of money for sure but I don’t think Montblanc is being too egregious here all things considered. And even with the divisive green it’s got a lot more going on for it than some of the shining examples of banality trading on the secondhand market these days. You can learn more at montblanc.com.