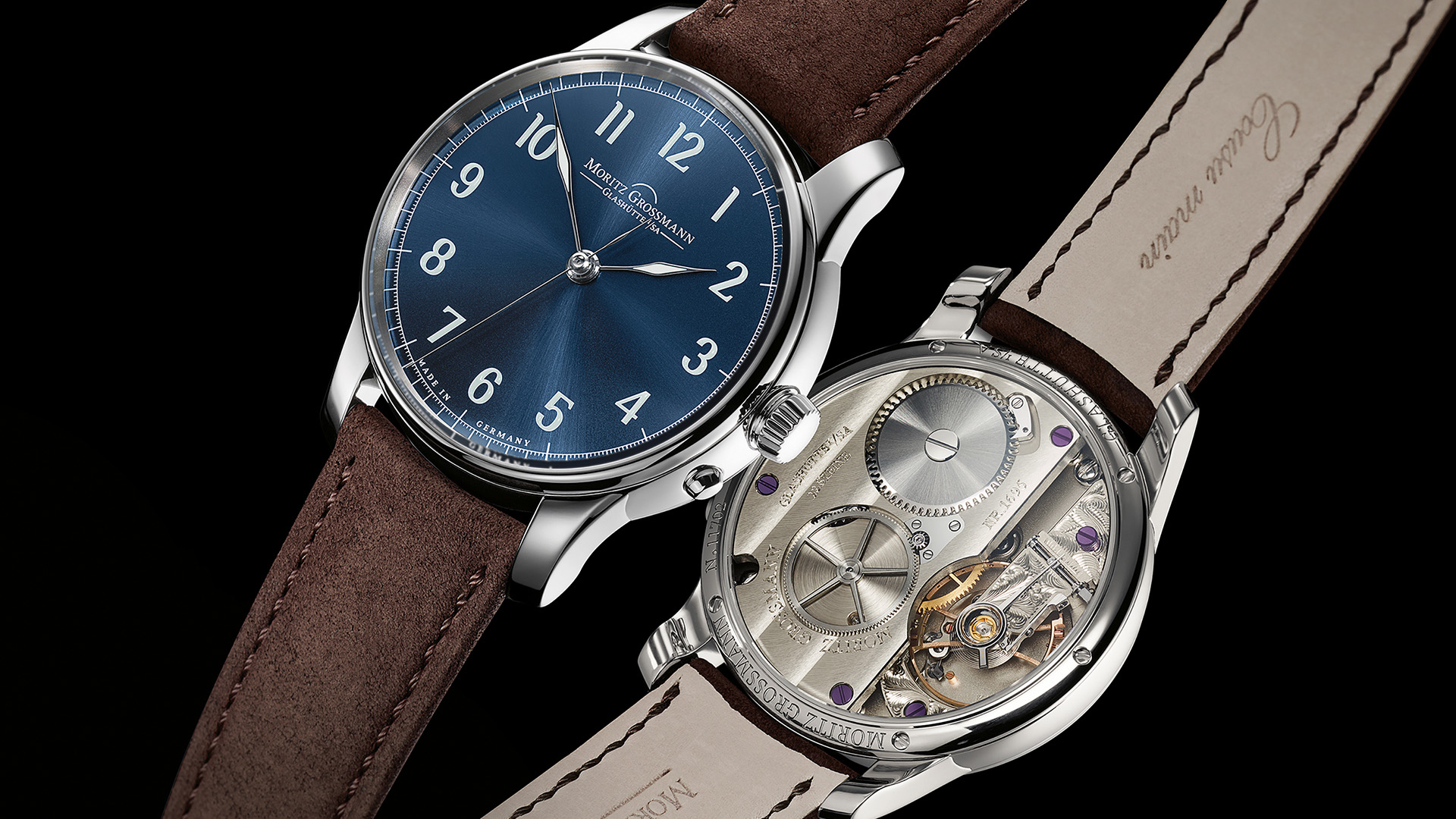 Compared with their more famous Swiss brethren, the watchmaking culture of Germany is generally more traditional, with a reputation for exacting attention to detail and refined, classical forms. With this traditional mindset, a German marque deviating from the norm and experimenting with new concepts can be quite a noteworthy occurrence at times. Glashütte-based Moritz Grossmann is a fine example of the German watchmaking ethos, with its 13-year back catalog filled with elegant and classical dress designs that predominantly feature a small seconds subdial. This sub seconds arrangement is so integral to the brand’s timeless image that for its first release of 2021, the brand named its collection after the decision to change this singular element. With a more modern, everyday aesthetic and a pair of distinctive dial finishes, the new Moritz Grossmann Central Second is a clean and handsome step out of the brand’s core stylistic territory. 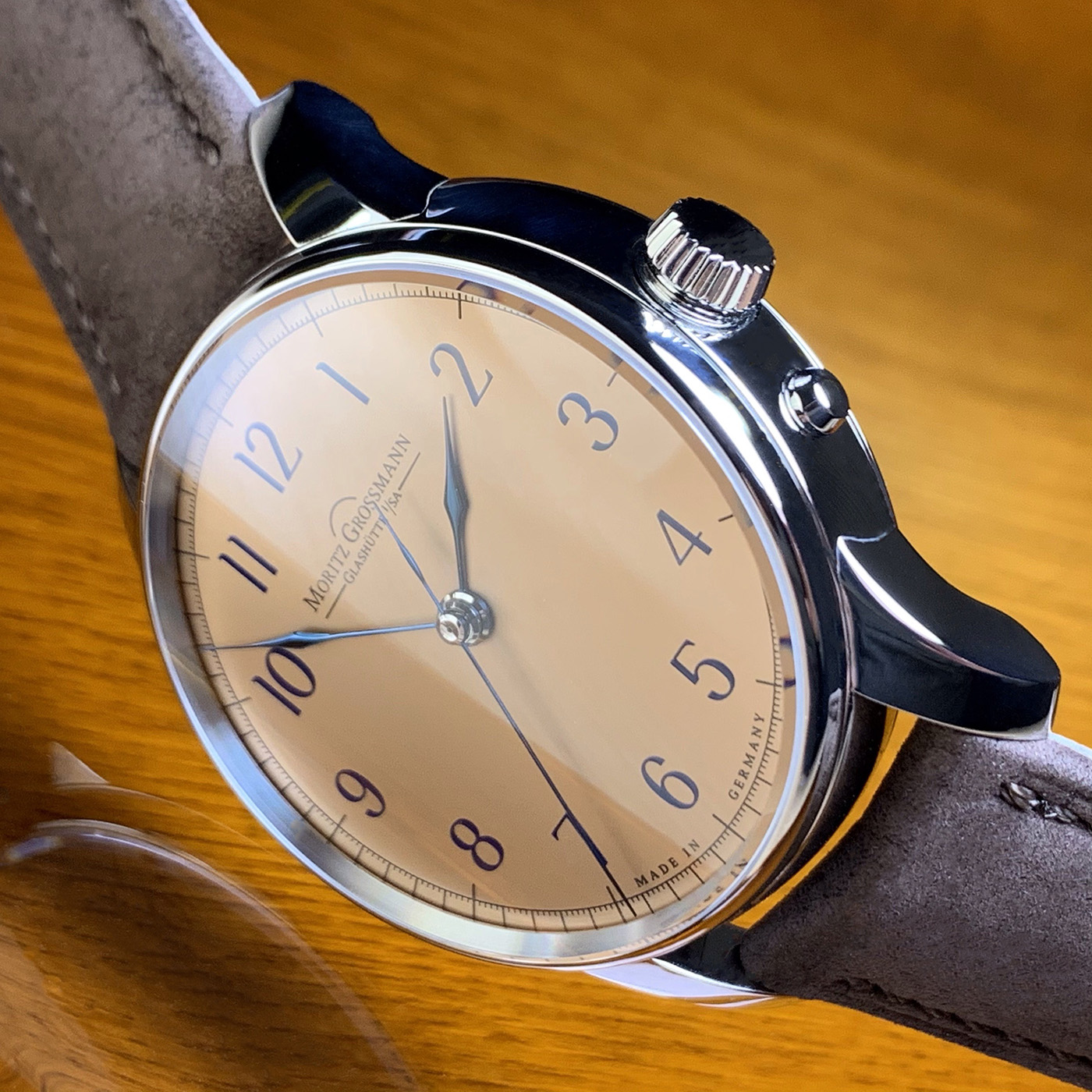 The 41mm stainless steel case of the Moritz Grossmann Central Second is on the larger side for its style, and stands slightly tall for a handwound piece at 12mm thick. That said, the design itself is clean and elemental. With a fully polished finish, the flowing downturned lugs, simple cylindrical mid case, and elegantly narrow bezel take on a delicate and refined character in line with the brand’s previous releases. Moritz Grossmann gives this simple look some unique personality on the 3 o’clock side of the case, where the Central Second uses the brand’s unique crown and pusher setting system. The crown itself sits slightly above the case side rather than flush, with a slightly truncated pillbox form that sets it apart from its competitors. In order to prevent the possibility of dust entering the case while setting the watch, as well as accidentally moving the hands out of position after setting the time, the crown of the Central Second performs both manual winding and time setting functions from the default first crown position. In order to set the time, the wearer simply pulls the crown outwards momentarily before it springs back into place. This stops the movement and allows for precise time setting, after which the 4 o’clock conical pusher can be pressed to start the movement running again and reset the crown to winding mode. Moritz Grossmann finishes the case of the Central Second with a wide sapphire display window. 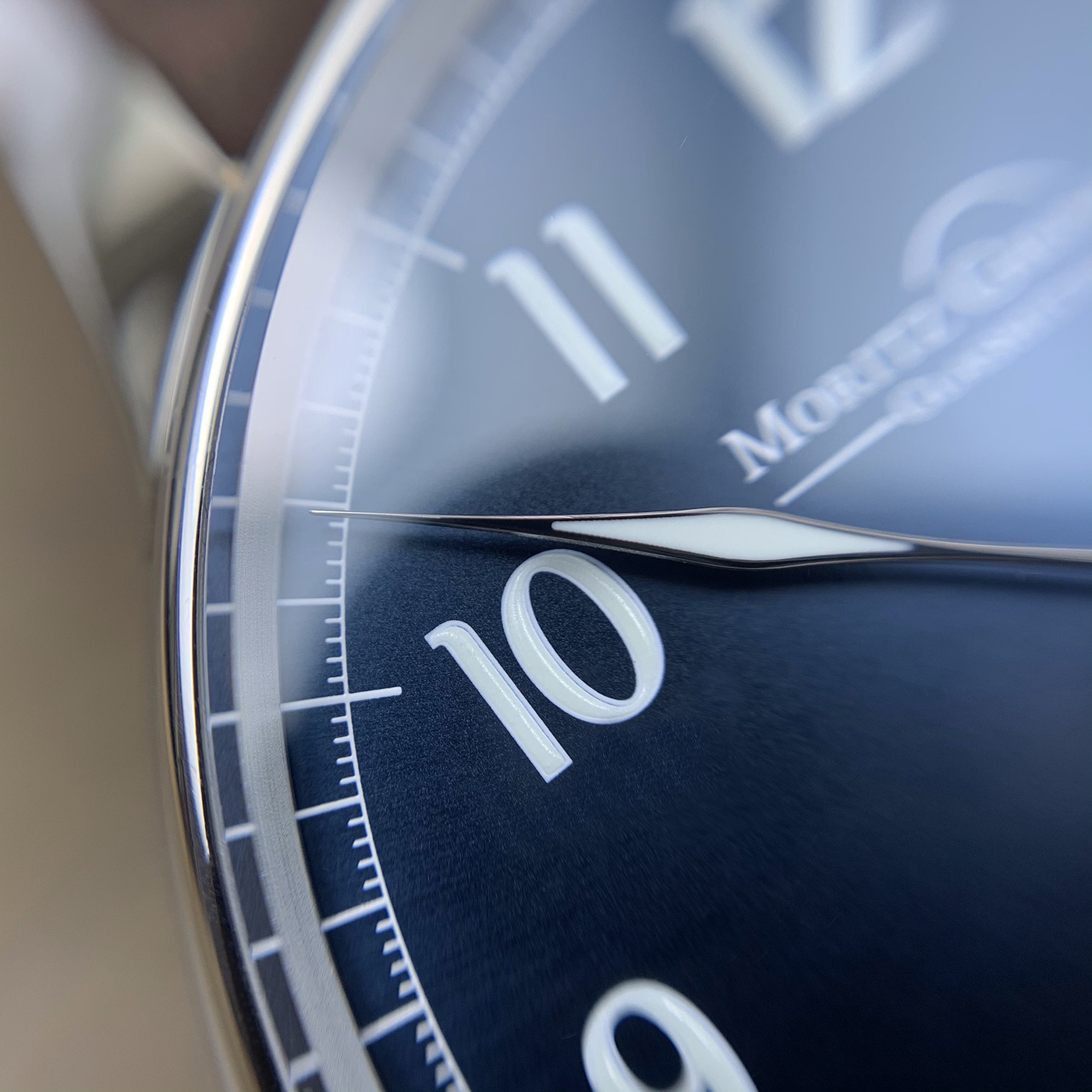 Available in two different colorways, the balanced and elemental dials of the Moritz Grossmann Central Second stand as a solid departure from the brand’s traditional core designs. The first dial of the pair offers a more relaxed, contemporary perspective on the brand’s signature look, with a deep cobalt blue sunray dial and rounded modernist Arabic numerals. In another major departure for the brand, both the printed Arabic numerals and the narrow diamond tipped handset are filled with lume, in this case a bright white fill of HyCeram Luminex luminescent ceramic. Naturally, the central stick seconds hand itself is the centerpiece of this design, and the brand highlights it with a needle-thin treatment reaching nearly to the rehaut, along with a refined tapering leaf counterweight. 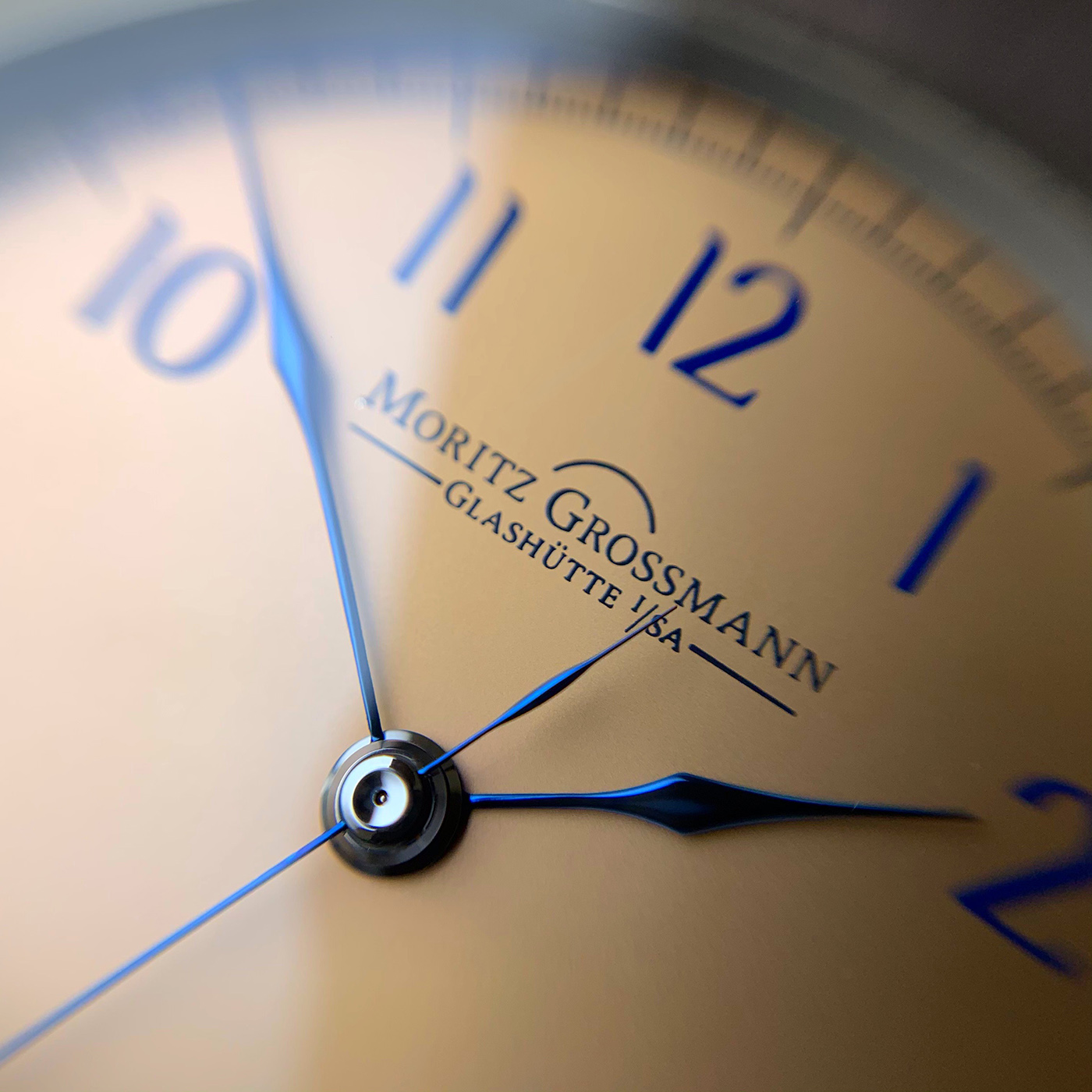 For the limited edition salmon dial variant, Moritz Grossmann splits the difference between the more modernist blue dial model and the marque’s more traditional fare. The matte salmon tone of the dial surface is a classical touch that adds warmth to the design, while contrasting handsomely with blued dial elements in initial images. While the heat blued hands are obviously changed from the lumed stainless steel examples of its stablemates, this salmon dial variant adds several subtle touches that reinforce a more refined, classical feel overall. Beyond the flame bluing treatment, the hands both lose their lume fill and receive substantial reprofiling, with a slimmer overall look and a more dramatic taper around the diamond tips. Likewise, the deep navy blue printed Arabic numerals share the same basic typeface as the blue dial example. Here these forms are more slender and airier however, giving the dial a more open and minimal feel in images. 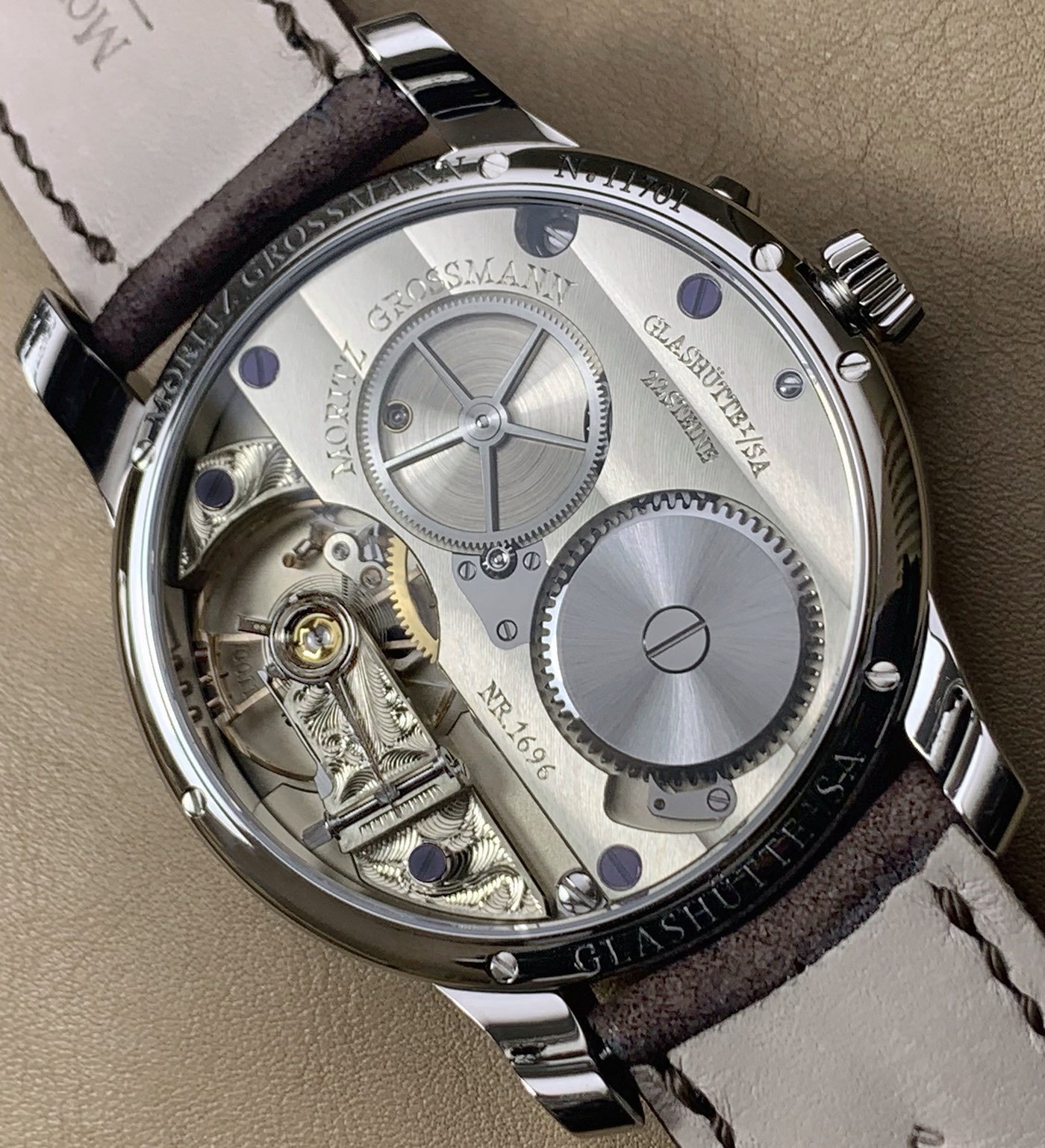 Moritz Grossmann powers the Central Second with the manufacture Calibre 100.11 handwound movement. Finishing is in the classical German style, with a broad striped two-thirds plate in warm German silver accented by hand polished chamfering. The cantilevered balance cock is richly decorated with intricate hand engraved filigree, as is the smaller flanking escape wheel cock. Moritz Grossmann adds its own signature touches to this style, with purple screws and clear jewels in place of the standard ruby tone. The power reserve of the Calibre 100.11 is a decidedly average 42 hours, despite the slow and classical 18,000 bph beat rate. Both variants of the Central Second are paired with a hand stitched strap made of kudu leather. The soft suede texture and medium chocolate brown tone of this strap helps to emphasize the more casual character of the Central Second in images, presenting it as much more of a daily wear timepiece than its more formal stablemates. 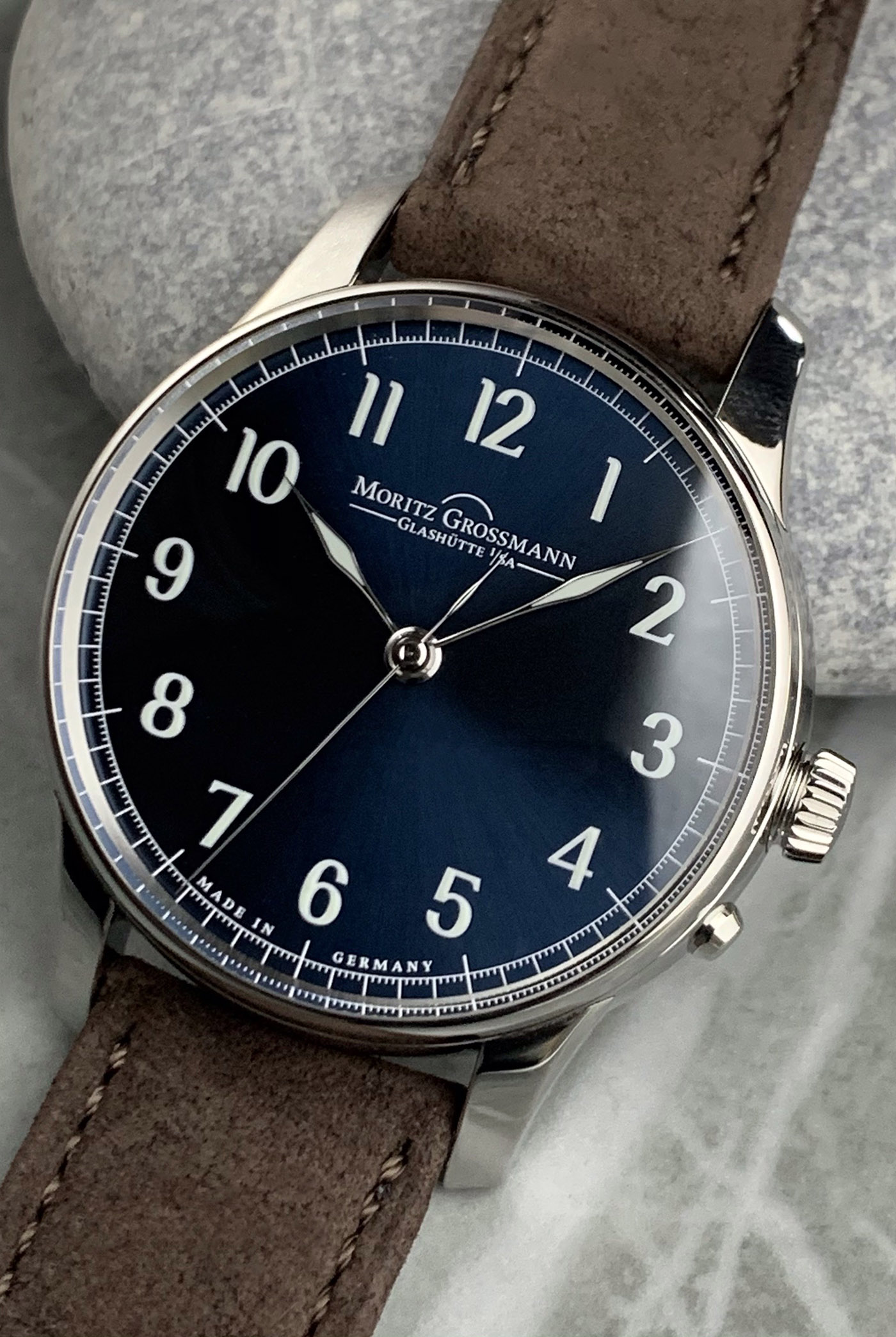