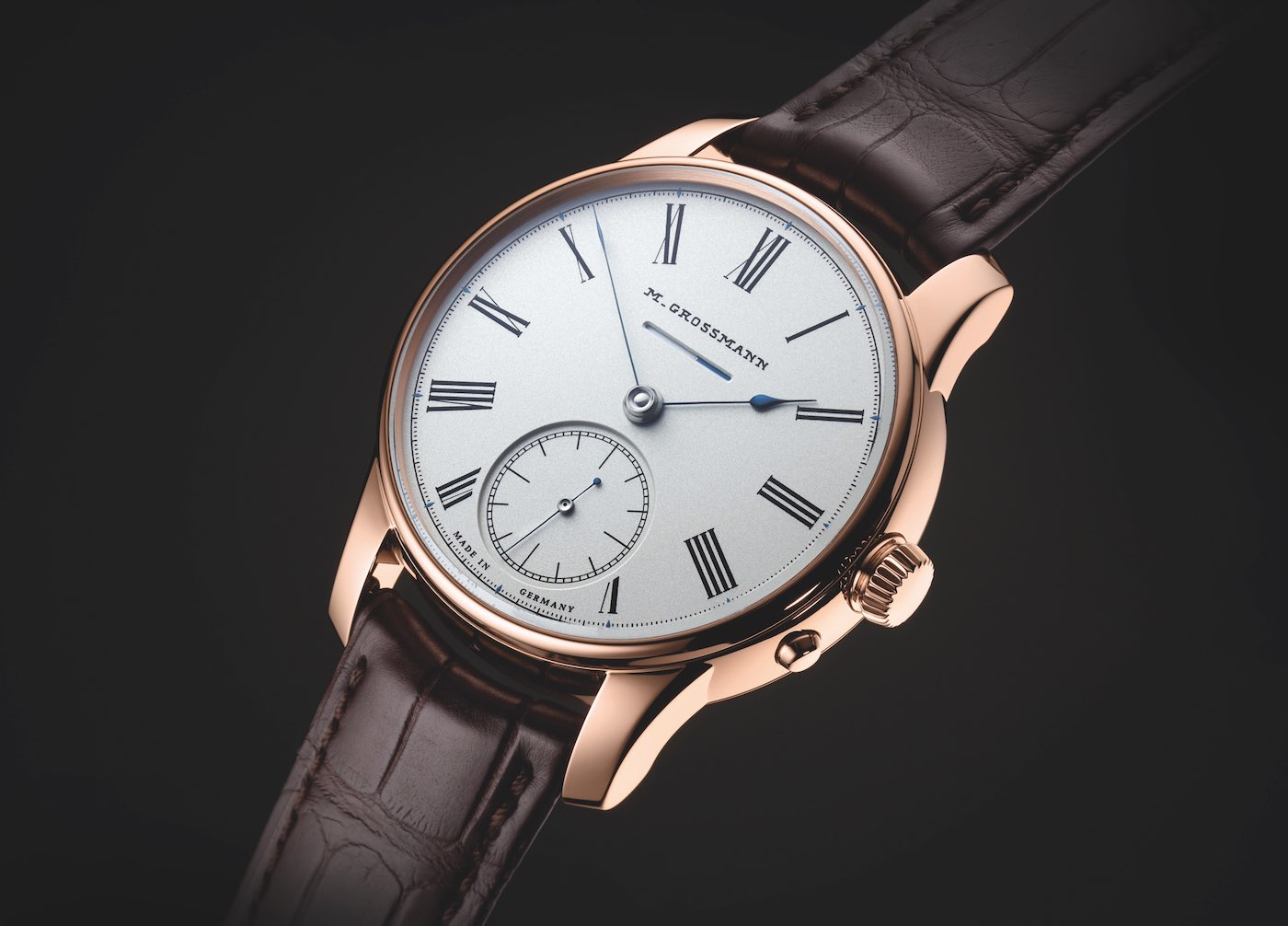 The recent spate of charming additions to the Moritz Grossmann core collection continues. The Moritz Grossman Power Reserve Vintage watch is an homage to the brand’s namesake. How this piece honors the former Glashütte luminary more than others in the range is subtle: Aside from using a clean dial with Roman numerals (as was the preference of Herr Grossmann), so too does this “vintage” piece adapt the normal brand logo into something altogether more retro. This throwback font was seen on the Moritz Grossmann Only Watch 2019 entry and is a nice, clean look for a brand that normally sports a slightly esoteric logo. It originated in the 19th century and is, in this writer’s opinion, a simple and attractive alternative to its modern counterpart. 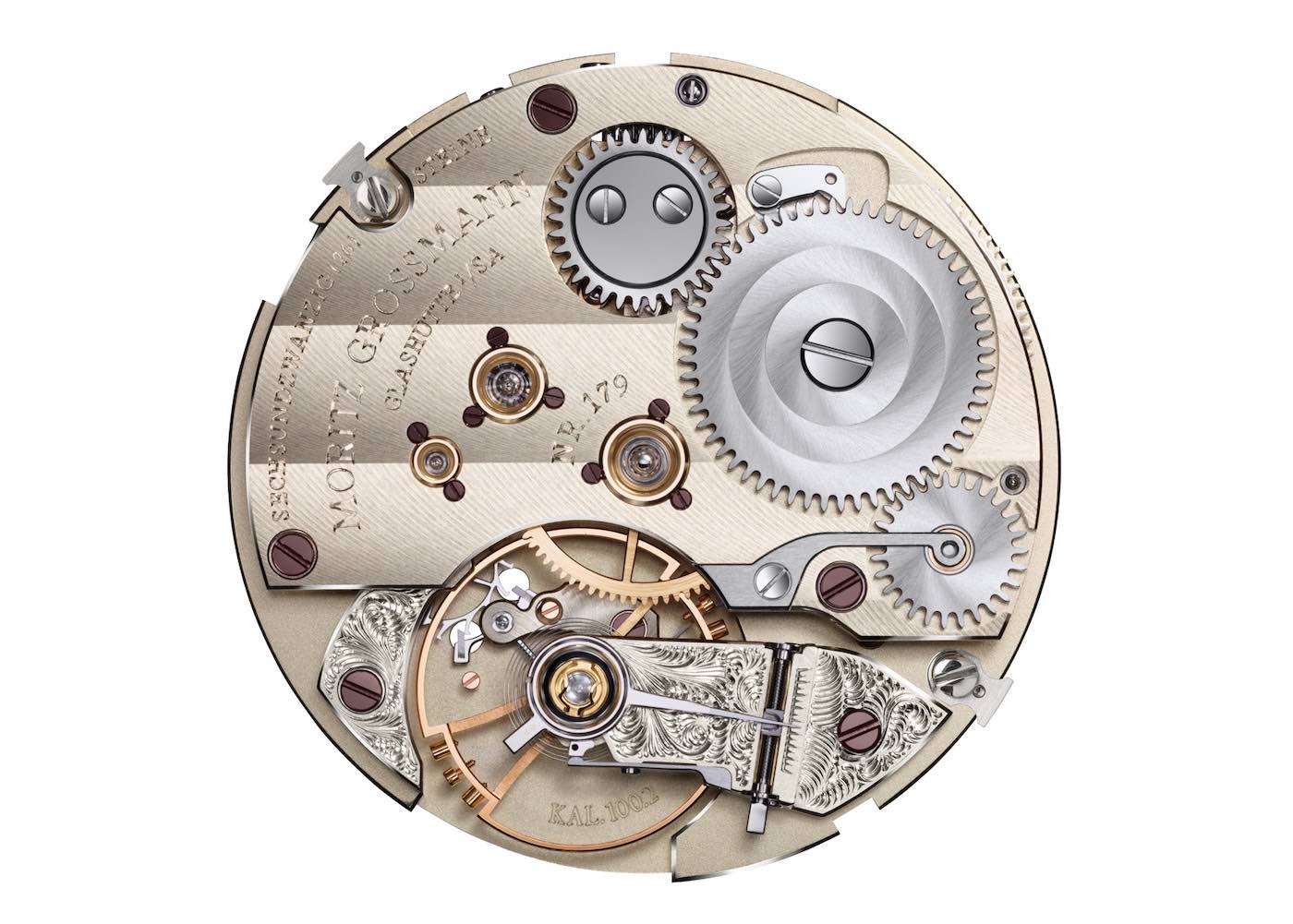 I don’t know whether you’ve ever stopped to consider exactly what the two lines on either side of the “Made in Saxony” text and the single semi-circular line that sits above the brand’s regular wordmark mean, but I learned last week that is supposed to represent the lower edge of the traditional 2/3 bridge used by Moritz Grossmann in his 19th century pocket watches. Many brands in Glashütte now utilize a “3/4 plate,” but Moritz Grossmann remains true to its namesake’s preference. These oversized bridges have the same practical effect. The solid movement construction reduces the play of the wheels between the bridge and mainplate, which theoretically reduces friction and thus improves isochronism and lengthens the power reserve (and reduces wear). 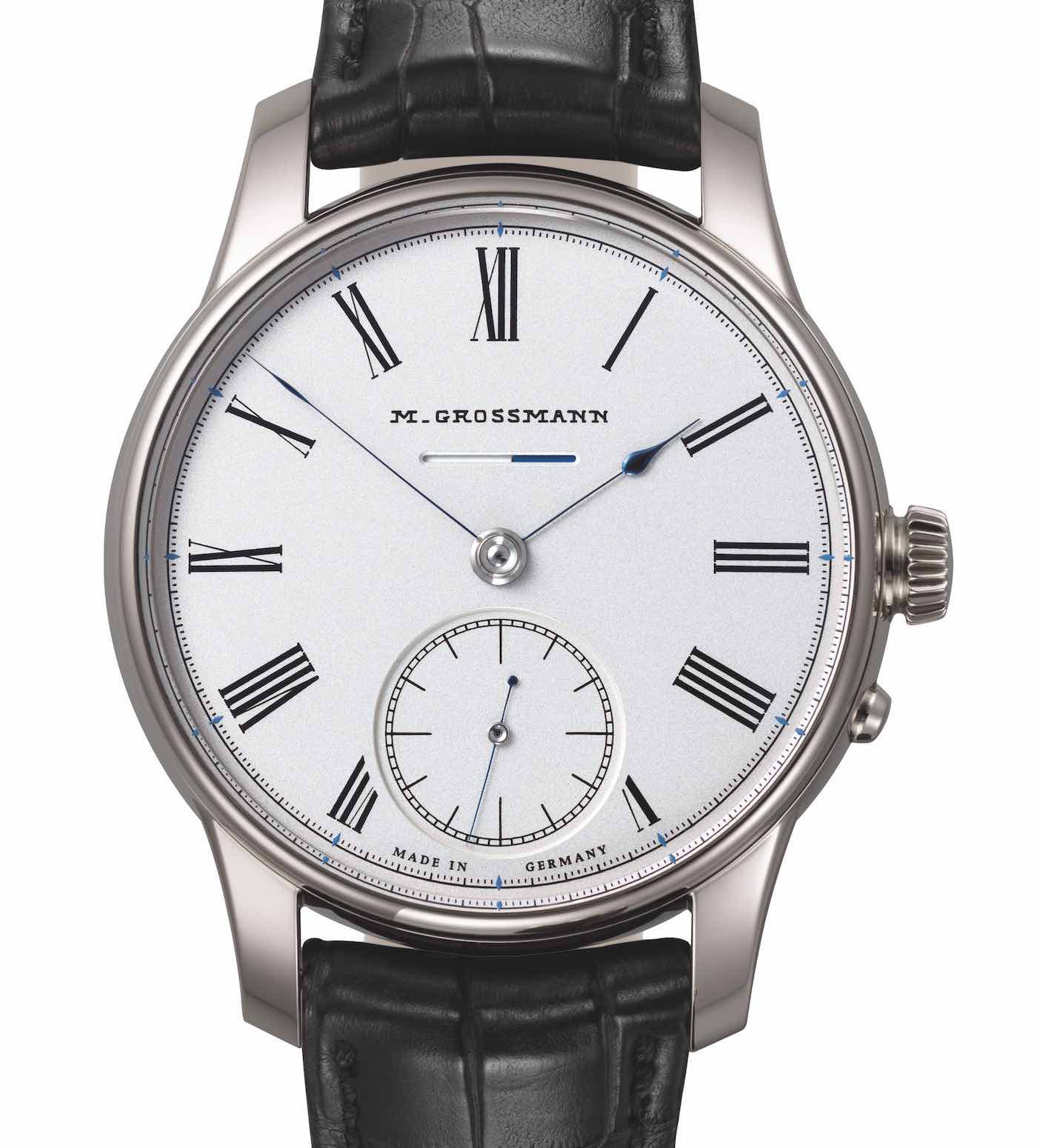 This is the latest model in Moritz Grossmann’s oldest collection. The Power Reserve model was the first to be launched by the newly founded company, hitting the shelves in 2010, and it is pleasing to see a bit of variation, however slight, that brings this piece up-to-date with the current preferences for vintage aesthetics. This watch is driven by the manually wound Caliber 100.2 and sports a blue and white power-reserve indicator, as opposed to the more commonly used red and white version. The power reserve in question is 42 hours, while the operating frequency for this retro model is 18,000vph. 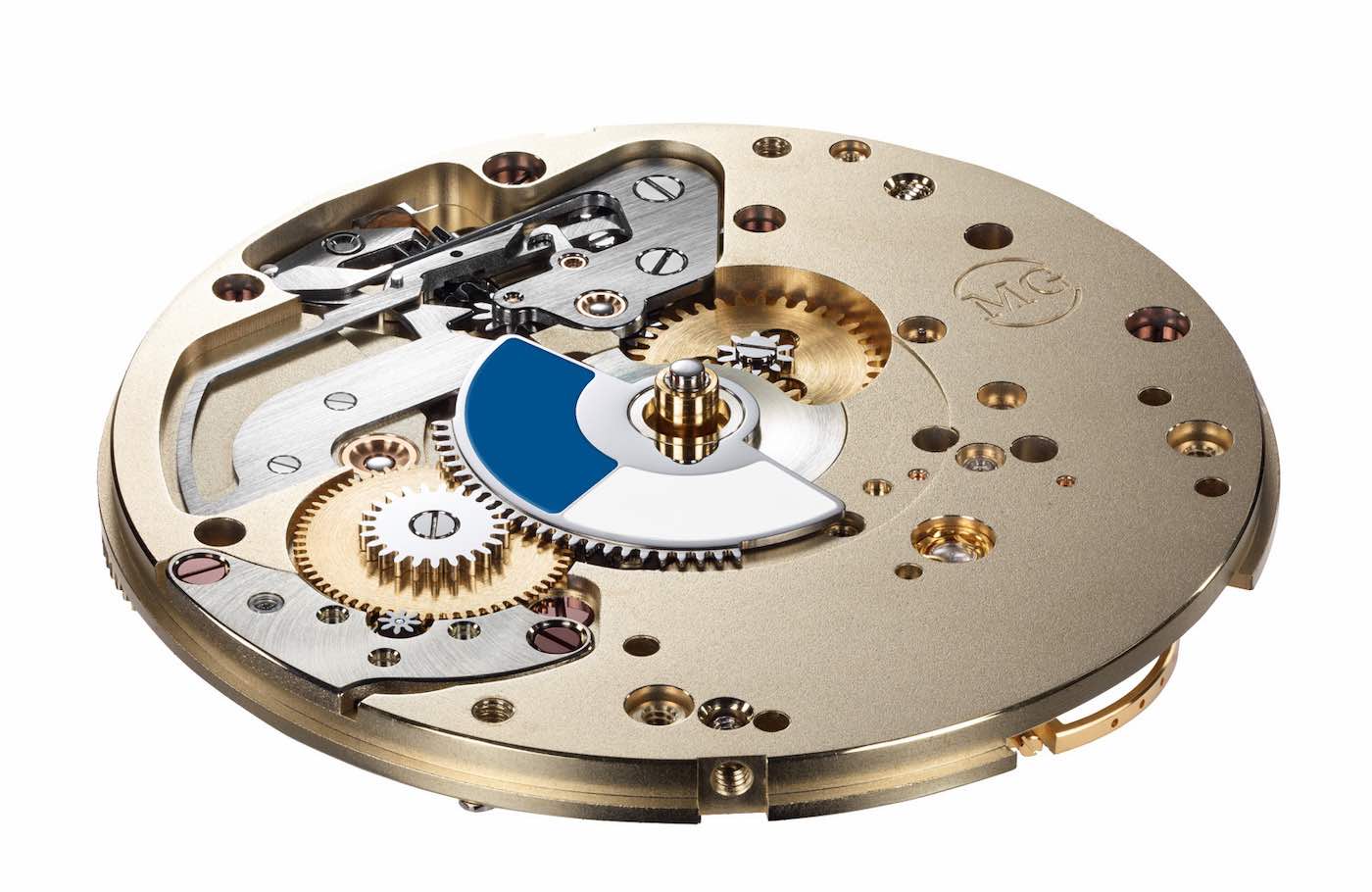 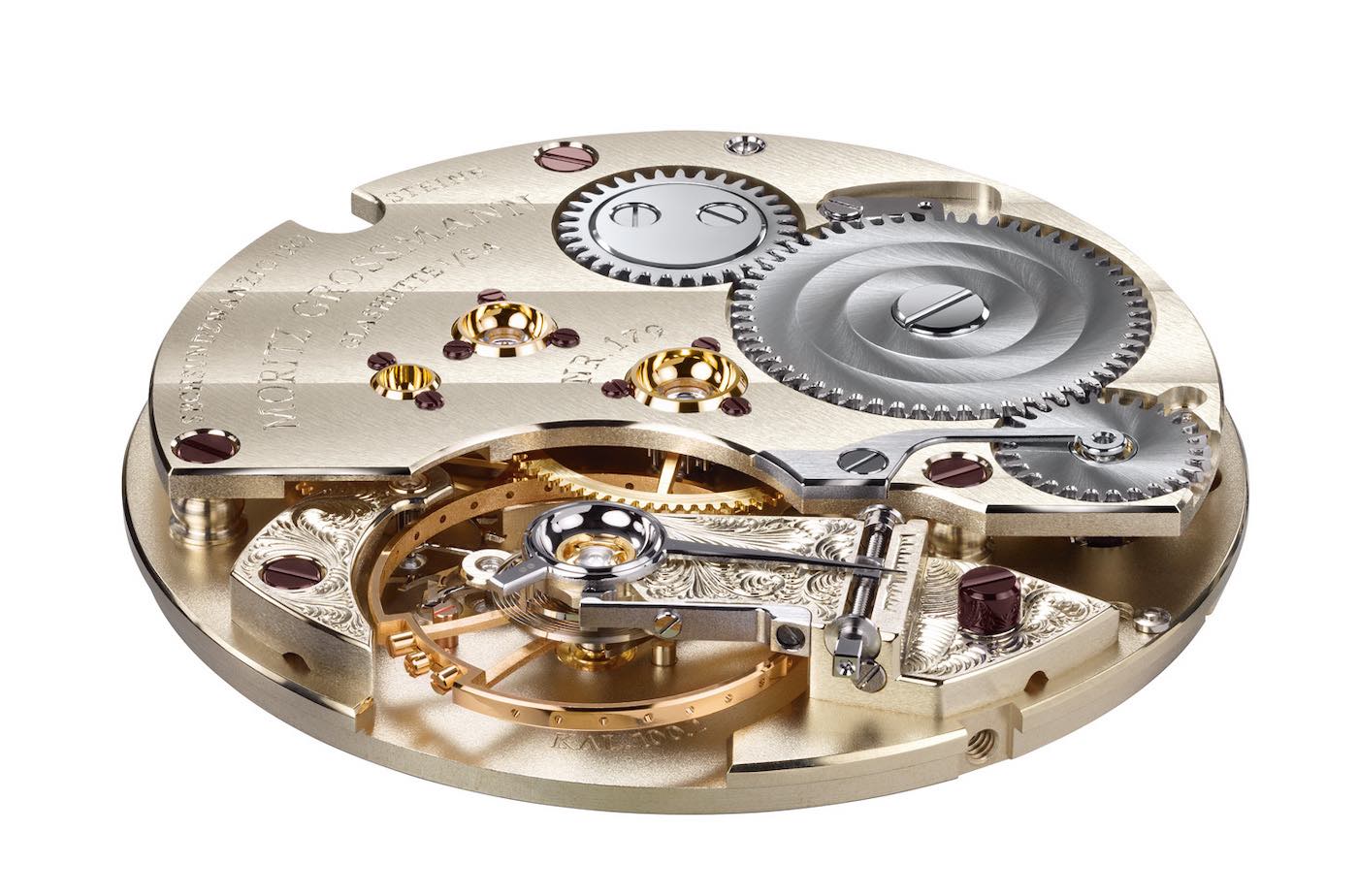 Pleasingly, the Moritz Grossmann Power Reserve Vintage watch is one of the lucky models to feature the brand’s hairline hands (that’s not their official name, by the way, just my nickname for them). These heat-blued steel hands can be, at their slimmest point, as thin as 1/20th of a millimeter. Machine cut and painstakingly hand-finished, these delicately assembled indicators are true show-stoppers. Having seen and been involved in the manufacture of many handsets myself, I can attest to the skill necessary to complete such a task. On a recent visit to the manufacture, I met the team responsible for this. To get up to speed with the quality standards takes new starters in the department one year of trial and error. The watchmaker in charge of finishing the hands at the moment has held the same position for seven years. And it shows. 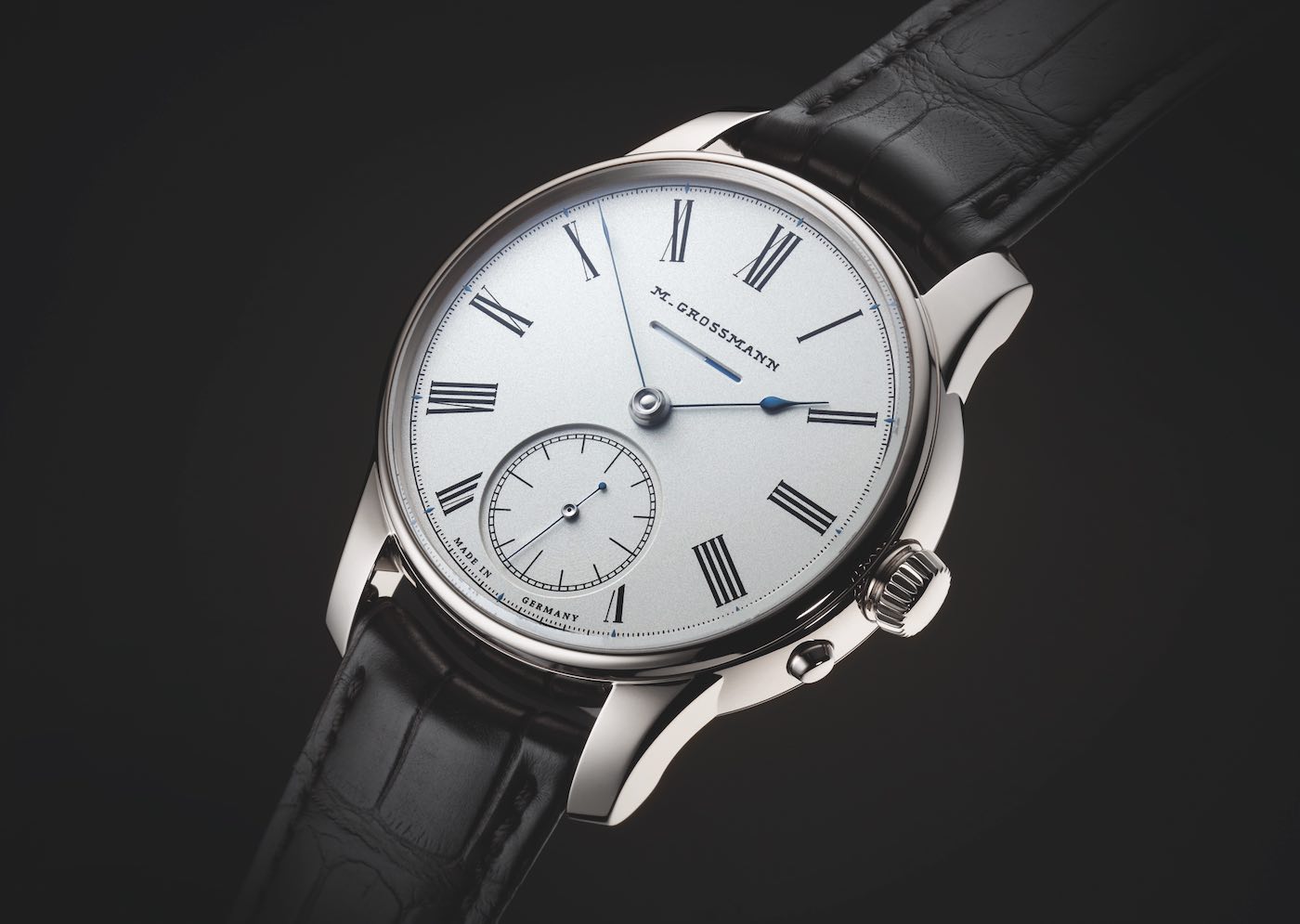 For some, the hands may be too thin, and from some angles, on the press shots, it does appear as if that could be the case. But they are more than fit for purpose in real life. The contrast between the hands and the solid silver argenté dial, as well as the restrained, uncluttered background against which the colored handset toils away, makes for a pleasant and intuitive reading experience. And while the absence of the violet/brown or brown annealed hands of the brand may be lamented by some, these hands have been blued to tie in with the power-reserve indicator, creating a chromatically cohesive design. 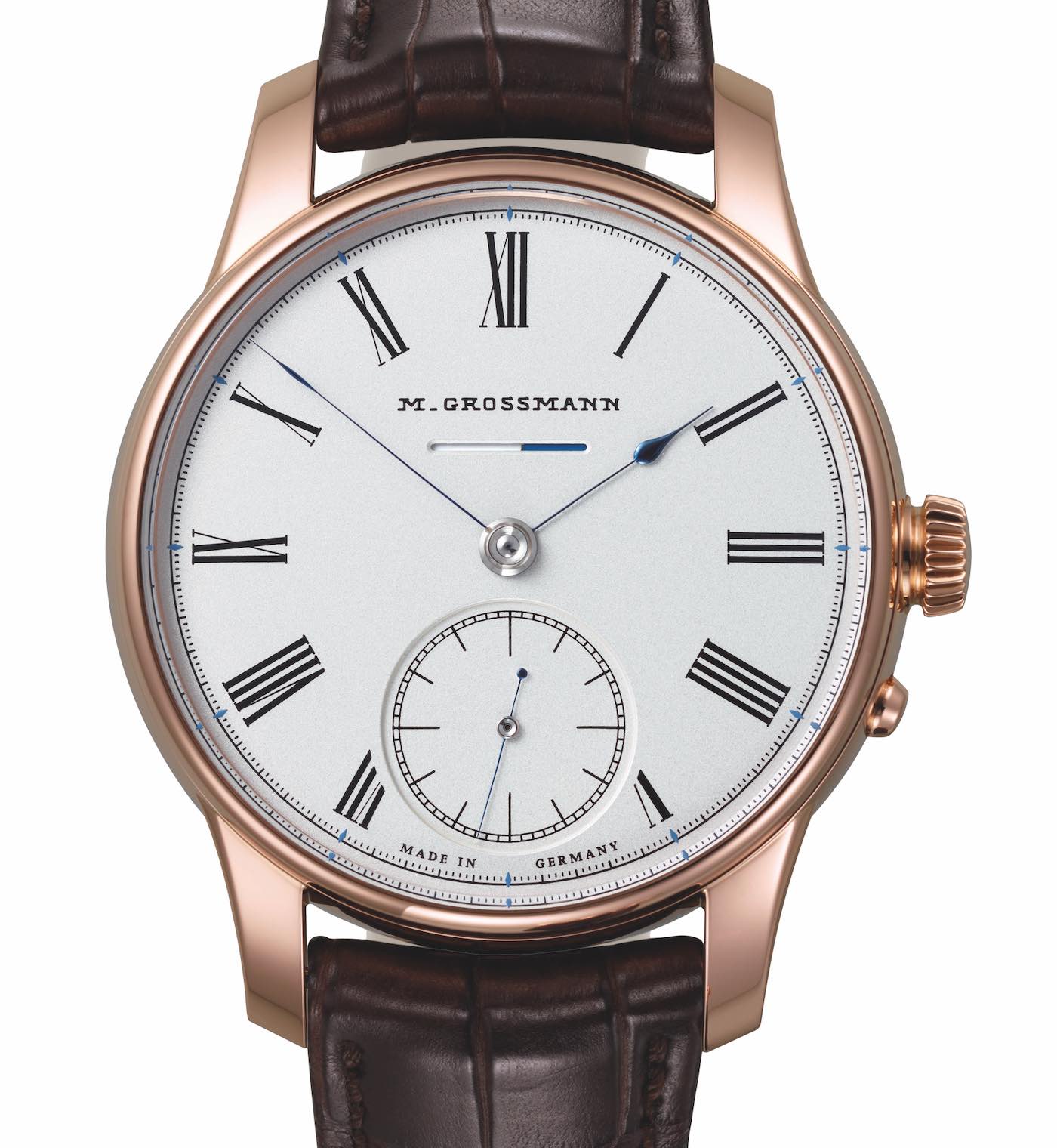