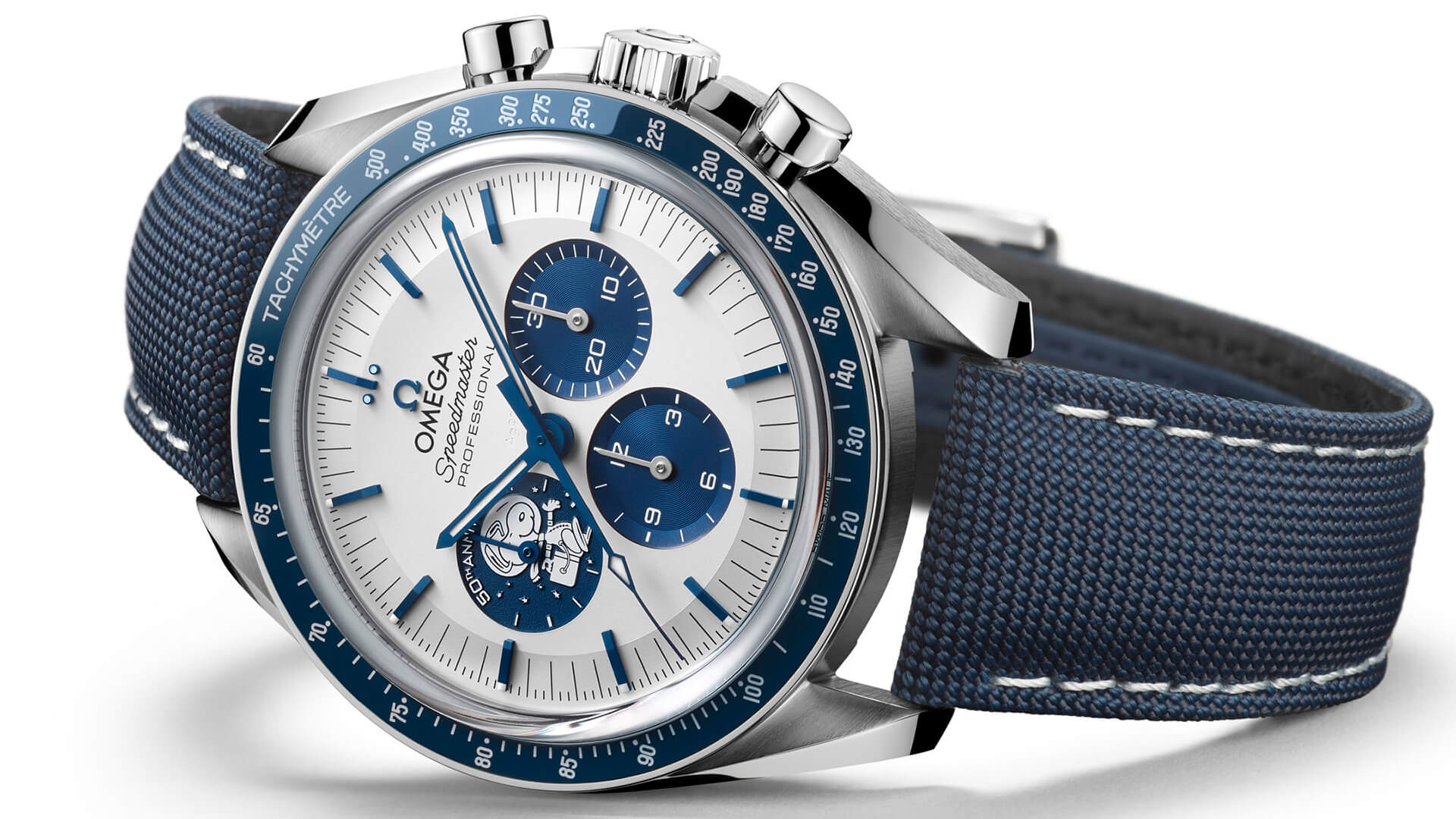 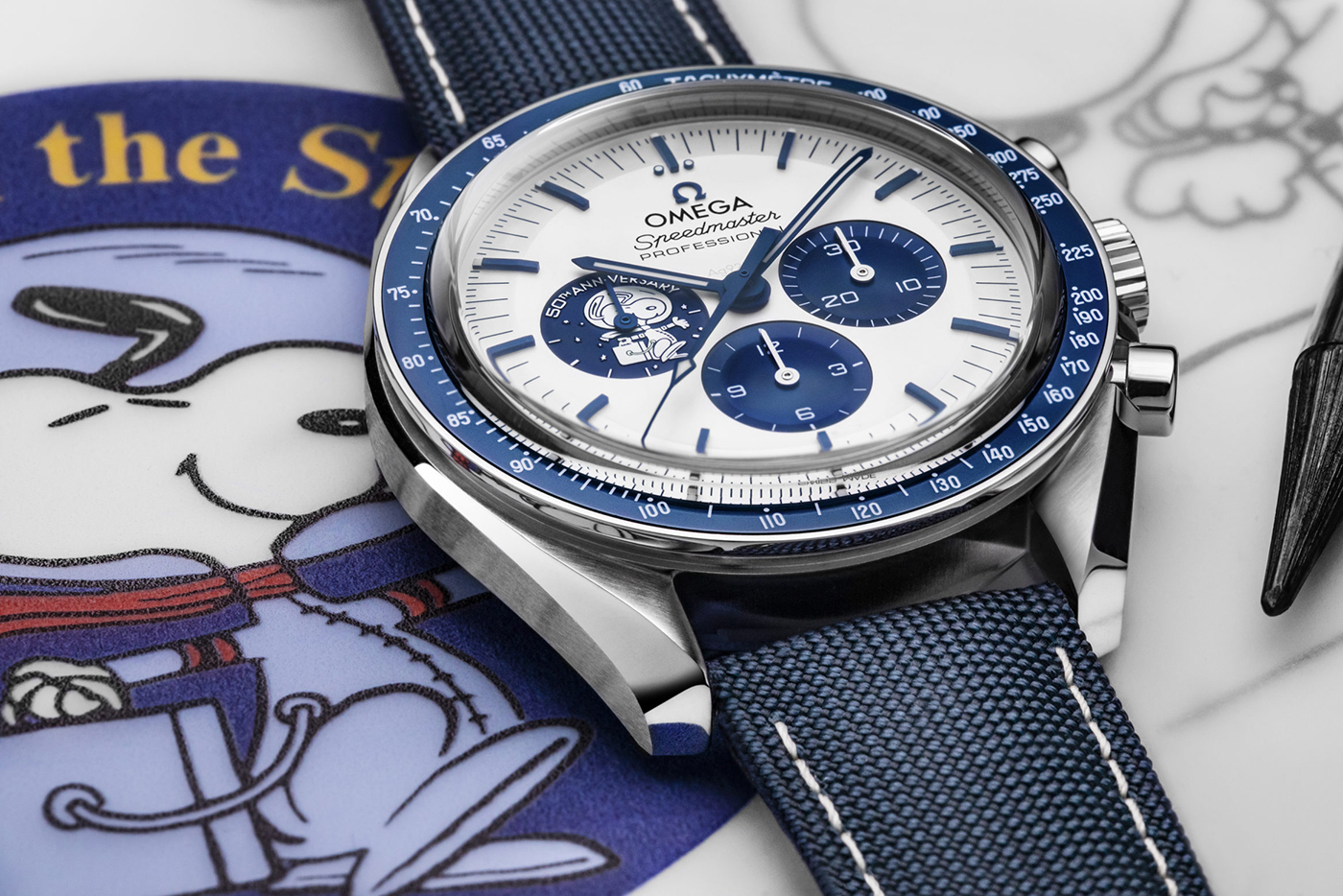 It’s awfully difficult to keep a secret when Speedmaster faithful have long-known good and well that 2020 would be the 50th anniversary of the Omega Speedmaster being awarded NASA’s prestigious “Snoopy Award” for its pivotal role in helping the Apollo 13 crew avert total disaster in 1970. After a year’s worth of speculation, the 50th Anniversary Silver Snoopy Award Speedmaster is here, and not only is this new stainless steel reference not a limited edition, is it an absolute stunner with a few very whimsical details — including an animated caseback — that create a very thoughtful connection between the Speedmaster, NASA’s prestigious Silver Snoopy award, and the universe of the beloved Peanuts comic itself. 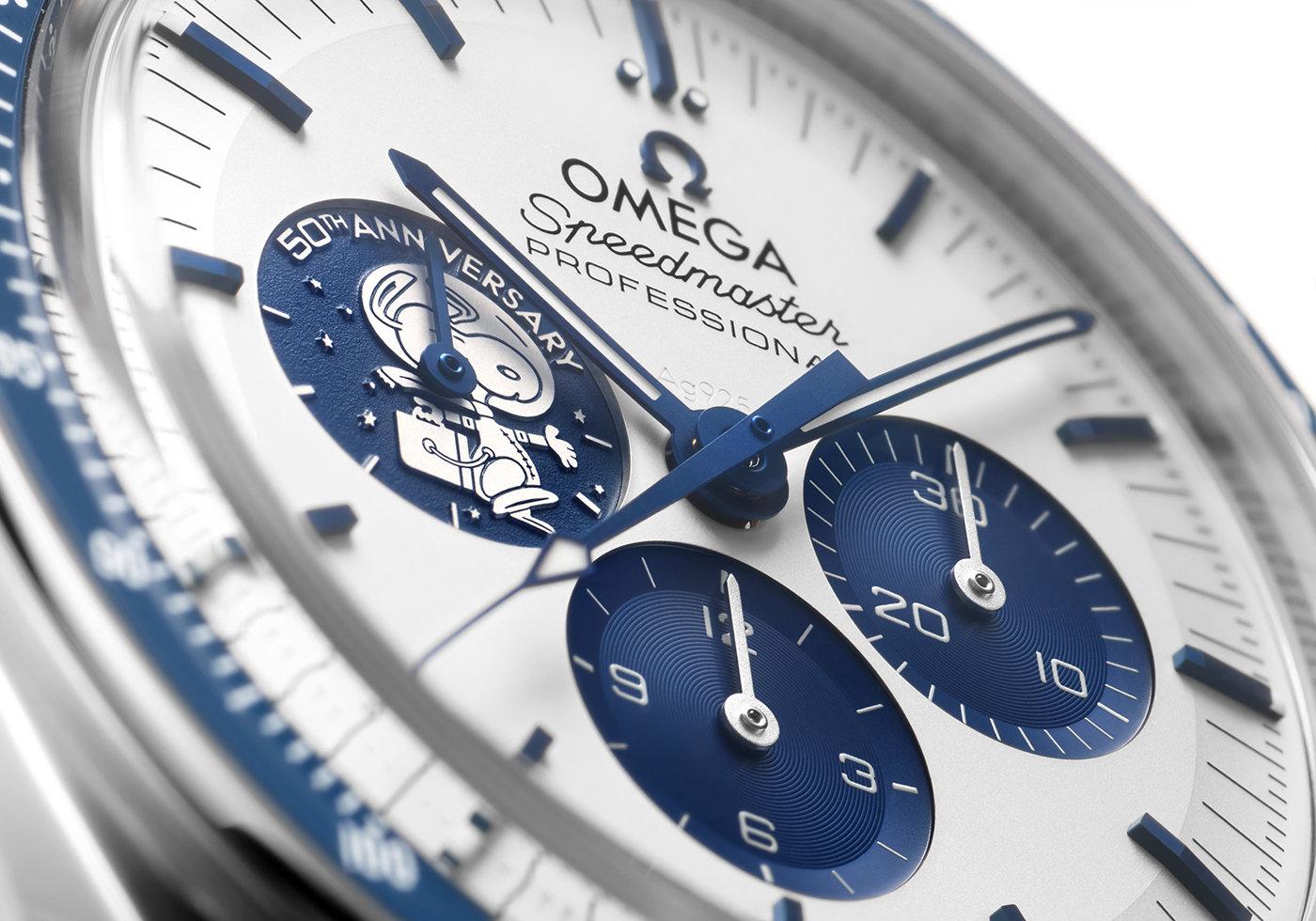 Though there have been two previous “Snoopy” Speedmasters (released in 2003 and 2015, respectively), you can’t make mention of these highly collectible references without first providing a little background on the award, and how a cartoon dog ended up on one of the most iconic chronographs ever made. The Silver Snoopy Award is one of NASA’s SFA (Spaceflight Awareness) awards, which recognize NASA employees and its contractors “for outstanding achievements related to human flight safety or mission success.” The award itself is a space-flown sterling silver lapel pin with the likeness of Snoopy presented by a NASA astronaut to the honoree with a letter of commendation. After the Speedmaster proved its muster in helping save the lives of the astronauts aboard the Apollo 13 mission, the Speedmaster was presented the Snoopy award, and the rest is watch history.

Rendered with an AG 925 silver dial (a nod to the sterling silver lapel pin that characterizes the physical Snoopy award) with high contrast PVD-coated blue elements, this new iteration echoes other past Omega limited editions like the Speedmaster CK 2998 LE which also used a similar blue-on-white color story, deploying a cheerful blue panda dial that pretty dramatically contrasts the stark black-on-white “comic strip” aesthetic of the Silver Snoopy Award 45th anniversary edition released back in 2015. Unlike that reference, which was limited to a scant 1970 pieces (making it quite a rare edition, indeed), the new 50th Anniversary edition is not technically a limited edition, meaning we likely won’t see the same wild secondary market pricing once this becomes more widely available to eager Speedmaster collectors. 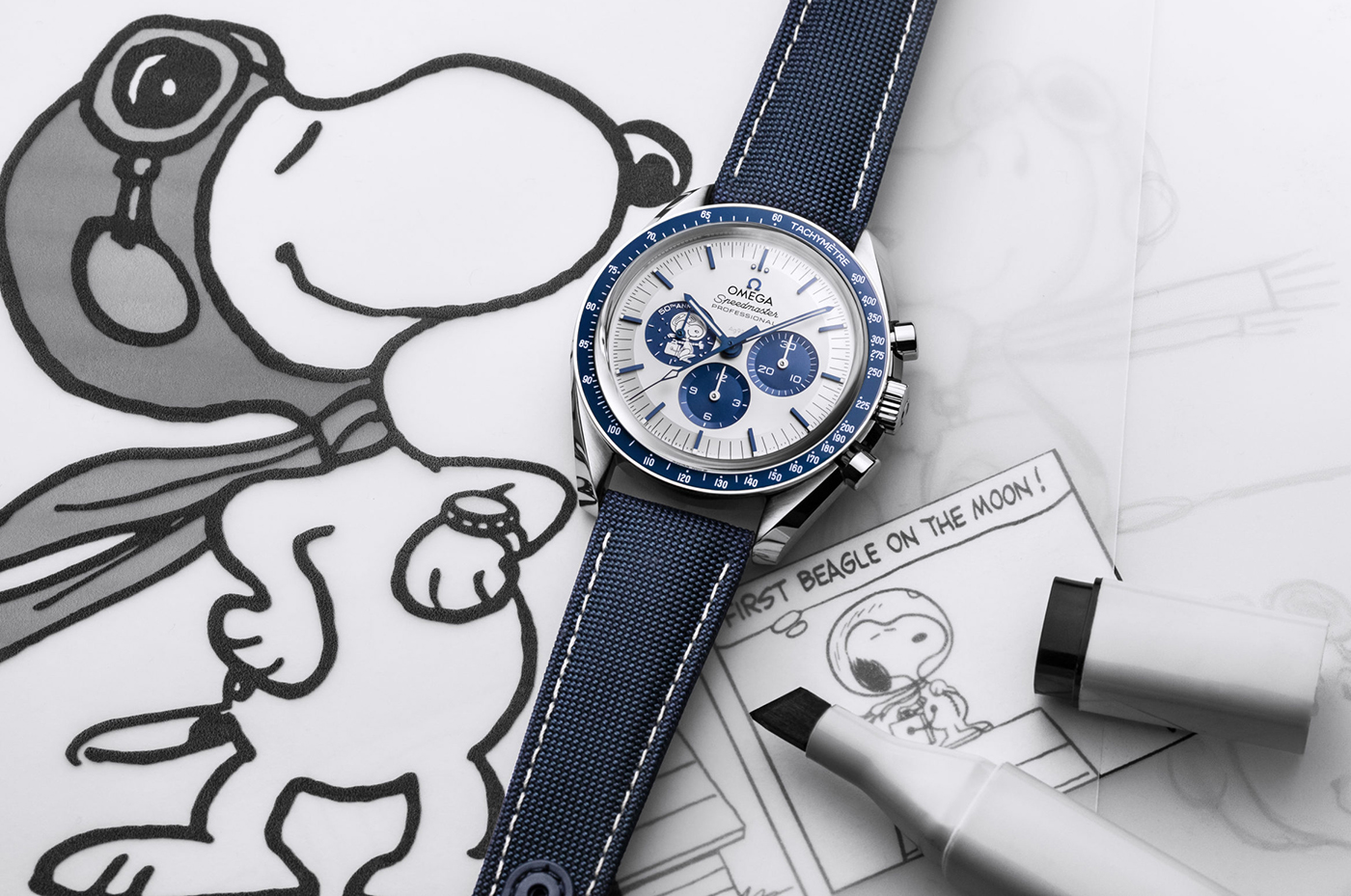 Omega has made some pretty impressive technological developments since 2015, and this new Silver Snoopy Award watch makes full use of all of them — from the new Master Chronometer-certified Calibre 3861 chronograph movement to the laser-ablated 9 o’clock register that’s rendered the Snoopy medallion in extremely crisp relief. Then there’s the Naiad-locking caseback, which neatly preserves the orientation of the sapphire crystal, upon which a scene of Snoopy orbiting the foreground moon in a command module is depicted using micro-structured metallization. But the real parlor trick here is twofold: firstly, the whisper-thin earth disc in the background is connected to the running seconds hand, and thus completes a full rotation once every minute. 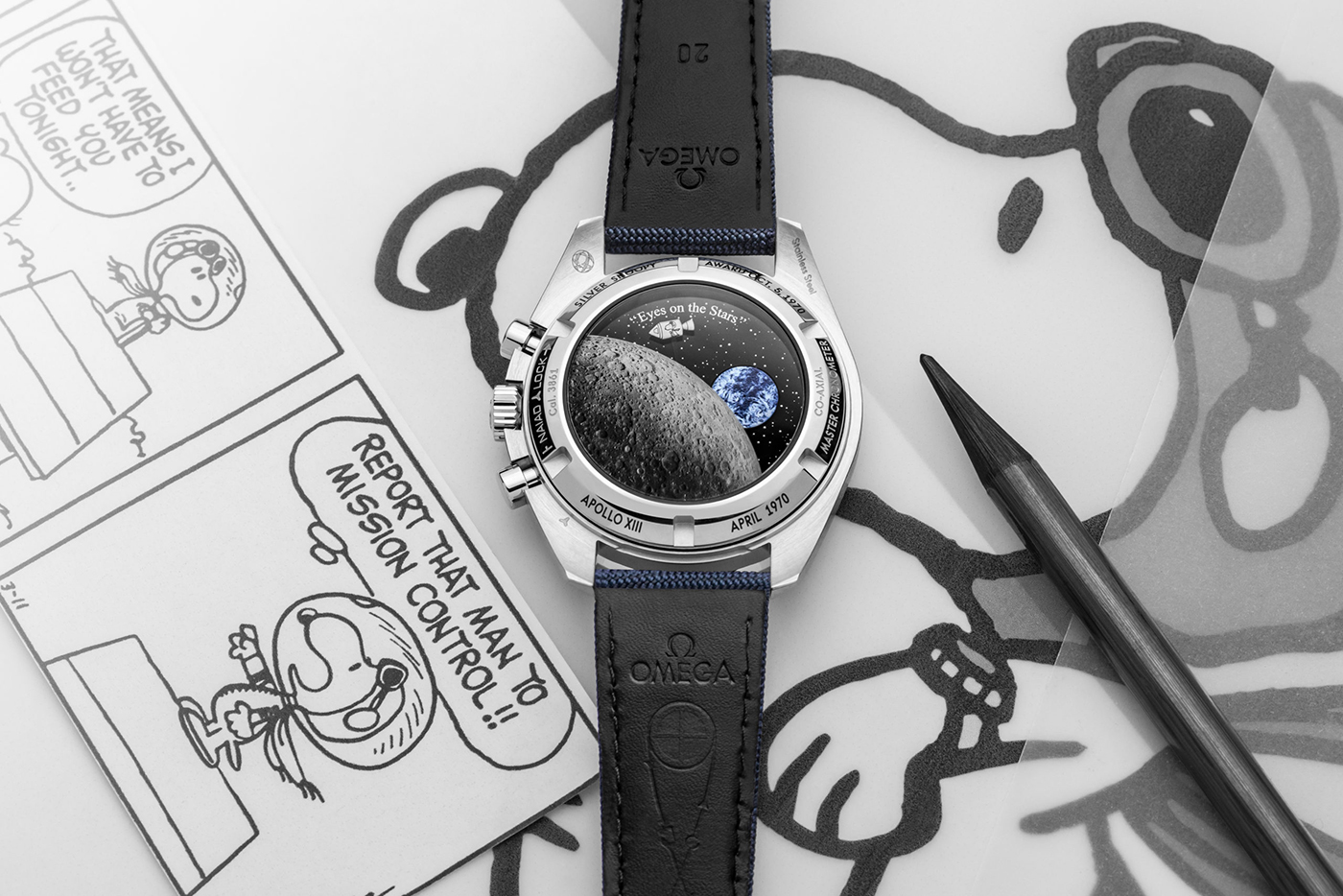 And when the chronograph is running, Snoopy actually orbits the caseback — his capsule is visible for exactly 14 seconds above the periphery of the moon before disappearing behind the gray surface, thanks a mechanical hand that’s cleverly hidden behind the moon motif. It’s a particularly neat detail that ties in the animated side of the legendary Charles Schulz comic Peanuts, while also maintaining a strong connection to the role of the Speedmaster in the ill-fated Apollo 13 moon mission without all the expository dialogue we saw on the dial of the 45th Anniversary edition. To wit, it read: “What could you do in 14 seconds?” in the first 14 seconds of the chronograph sweep as a nod to the 14 seconds that the Apollo 13 crew timed with their Speedmaster watches to course-correct after an oxygen tank on the service module exploded en route to the moon. 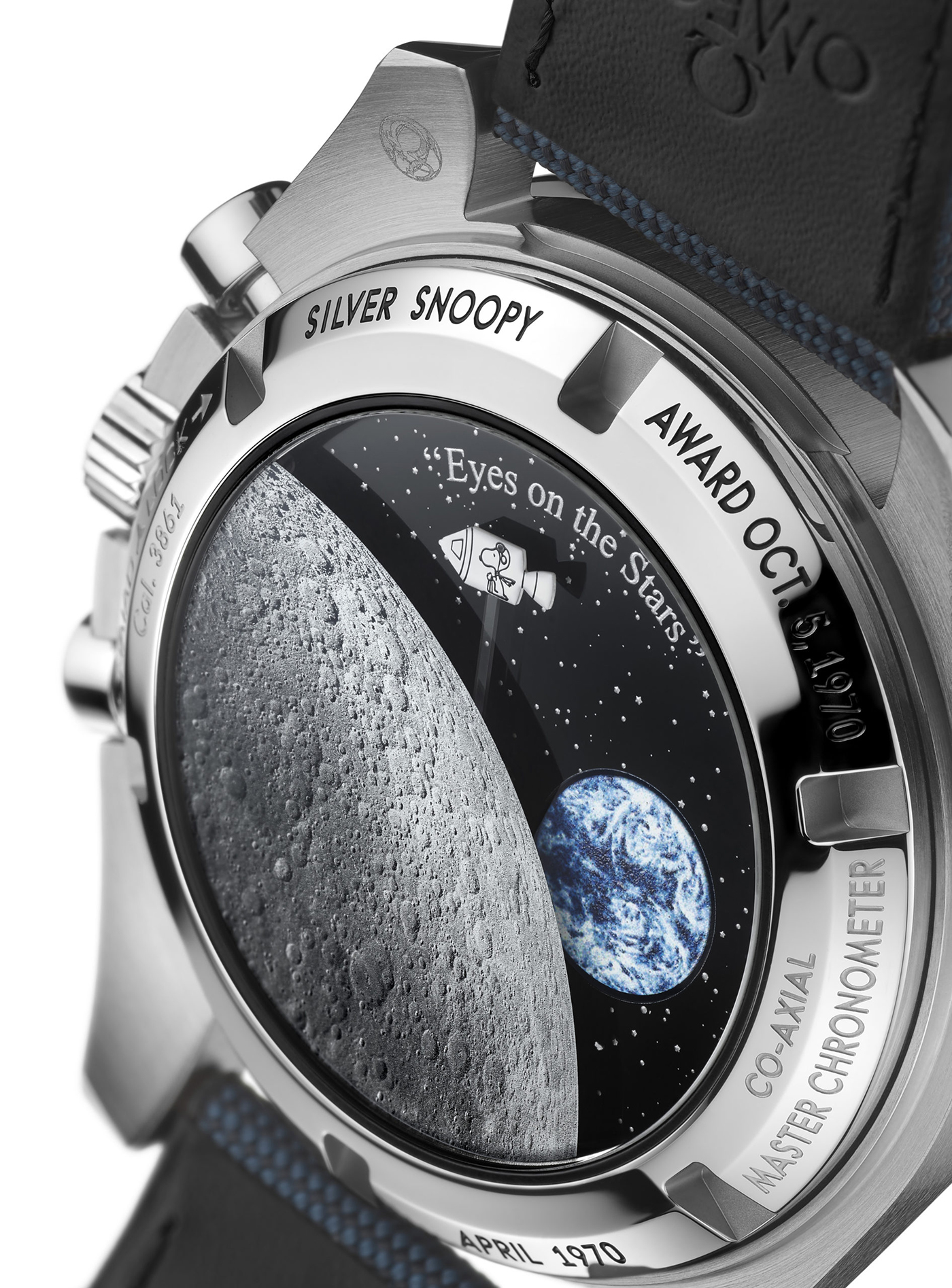 Once again, this Omega Speedmaster commemorating the 50th Anniversary of the Silver Snoopy Award is neither numbered nor a formal limited edition (though its production is quite likely to be limited to a specific amount of time). It has a price of $9,600 USD and is expected to land at retailers a little later this month. Learn more at omegawatches.com.