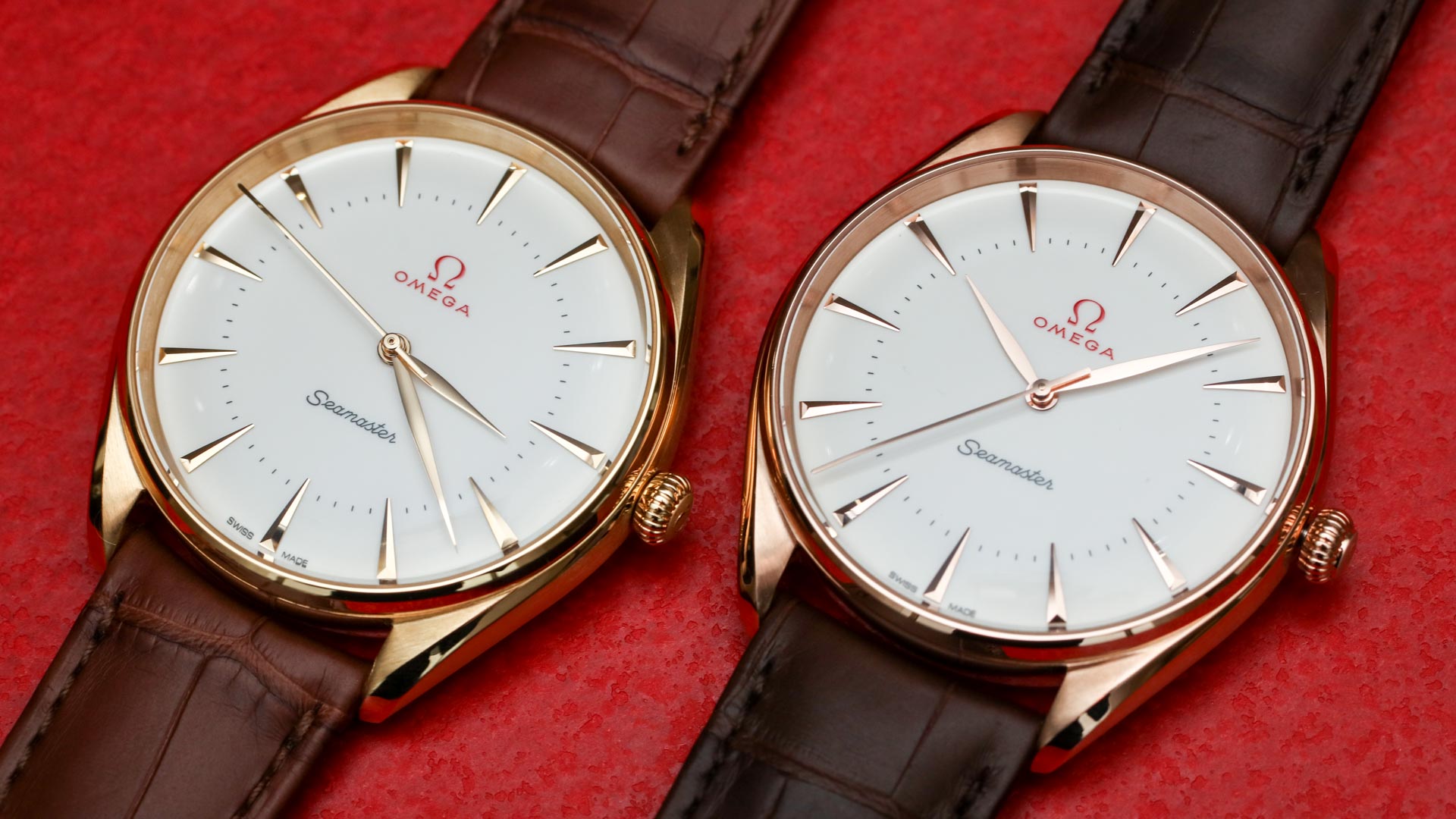 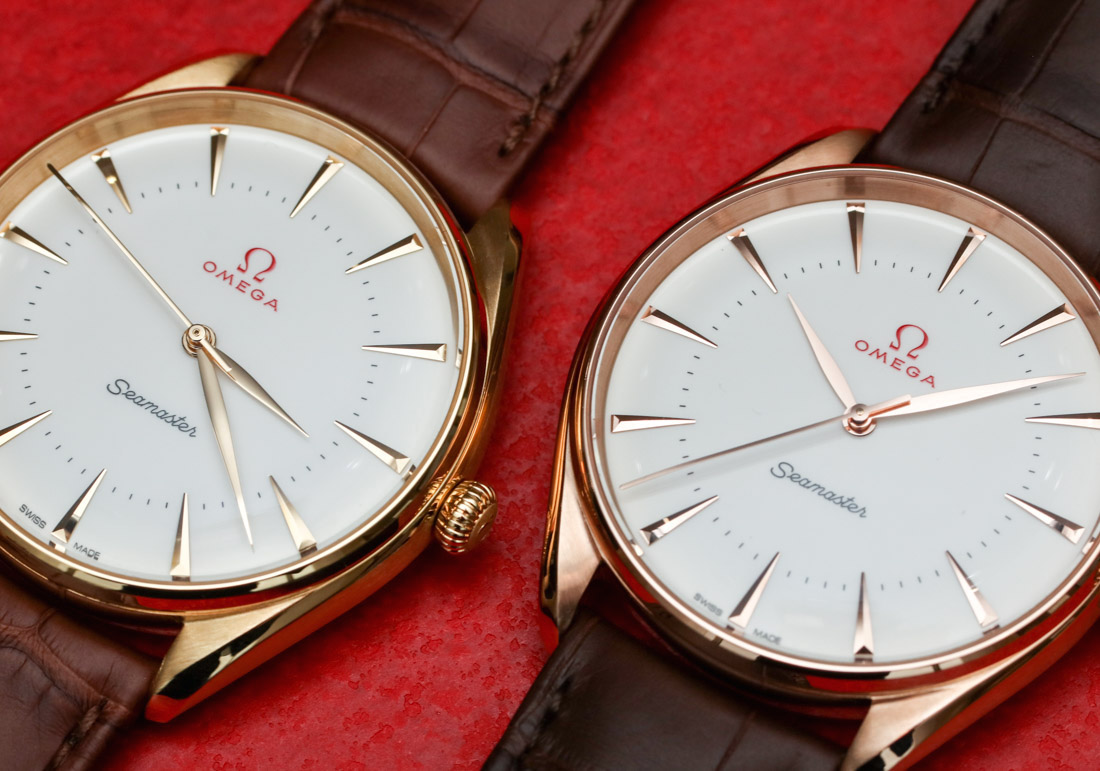 Since 1932, Omega has functioned as the Official Timekeeper of the Olympic games a grand total of 27 times and are expected to continue until at least 2032 – marking the partnership as 100 years old. Over those 27 times, there have been some pretty colorful designs that have taken cues from stopwatches with the Seamaster Olympic Official Timekeeper, to the sidewalks of Copacabana Beach with the Seamaster Diver 300M Rio 2016, to this year’s Seamaster Planet Ocean PyeongChang 2018, which takes the colors from South Korea’s flag. Needless to say, bold and colorful models dominate many of the limited editions that Omega releases around the Olympic Games. Dressier than the subtle Olympic Games watches we saw recently, the Omega Seamaster Olympic Games Gold Collection watches come in yellow gold, Omega’s Sedna (pink) gold, and a brand new “Canopus” (we will get to that later) white gold to channel the Gold, Silver, and Bronze medals that winning Olympians receive on the podium.

The pared-down, vintage-minimalist enamel dial shows wise restraint from Omega, who are clearly confident about the in-house METAS-certified movement within. Design that looks back in time successfully while subtly celebrating the brand’s association with the Olympics? Check. A movement that is arguably years ahead of those by comparable brands? Check. Please make one in steel? 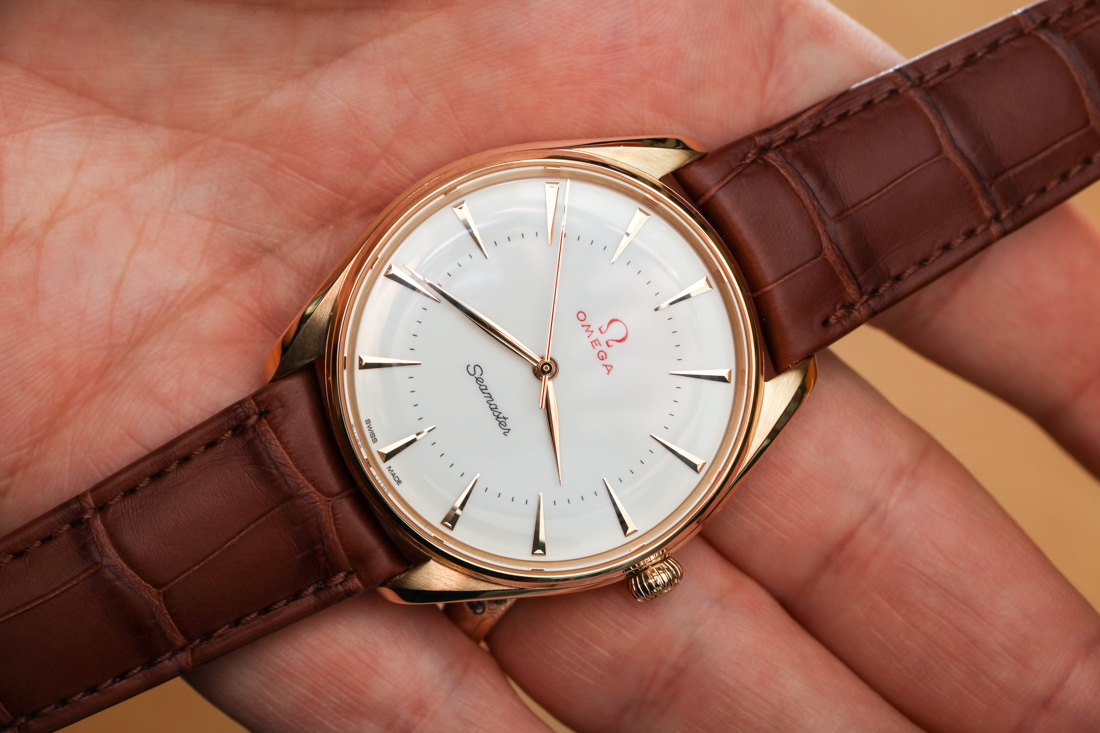 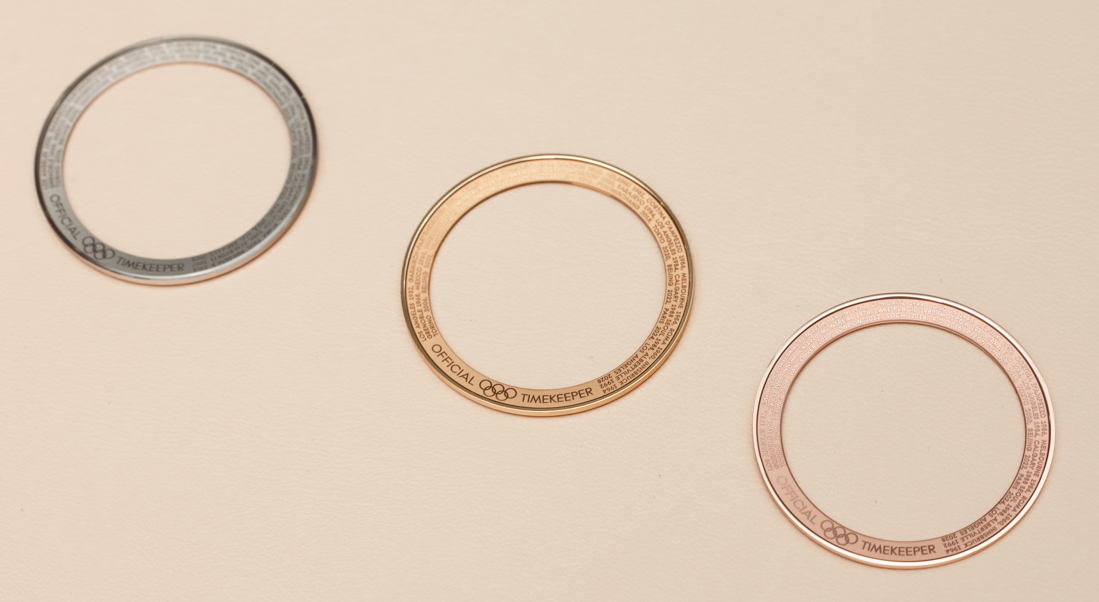 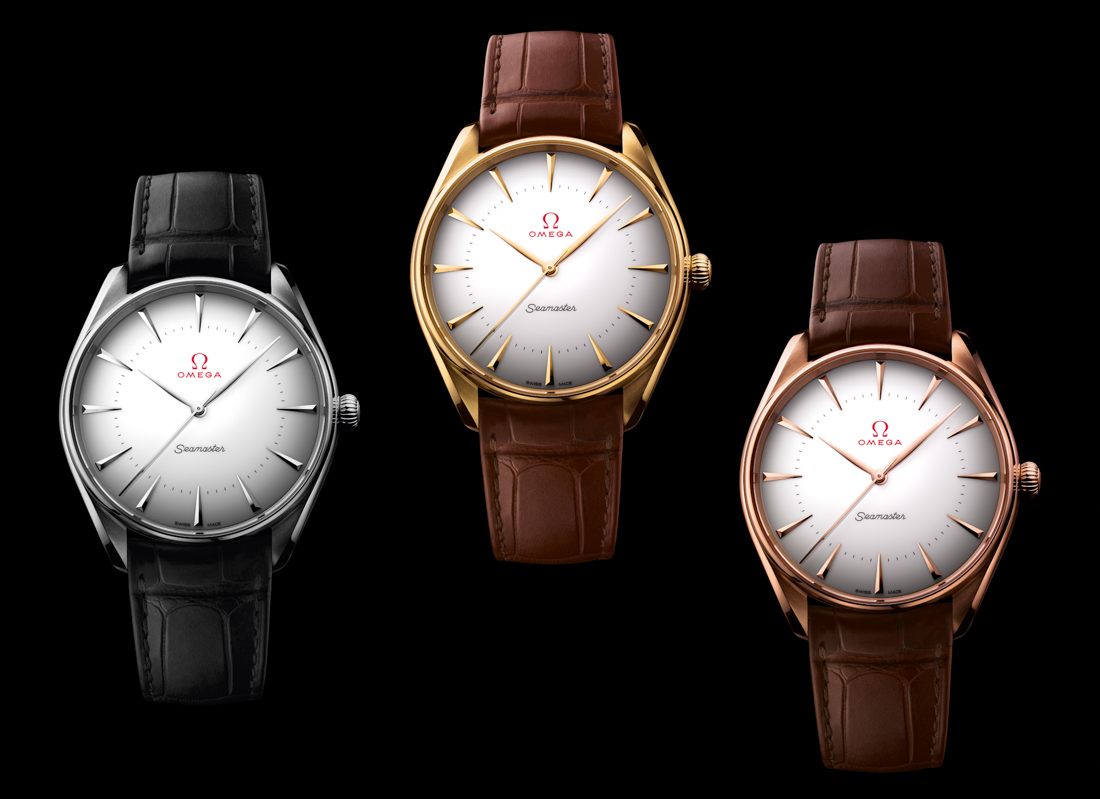 These watches measure in at 39.5mm (same as the Olympic Games watches) making them conservatively sized dress watches. The slightly domed eggshell enamel dial with simple gold indices channels the Seamasters of the ’50s and ’60s beautifully. Omega has done a fantastic job of bringing some modern life into a lot of their vintage models (1957 ‘Trilogy’ anyone?) and while there isn’t a direct reference to a specific model with these Seamasters, the Olympic Gold Collection watches look like they’ve walked right out of a James Dean movie. 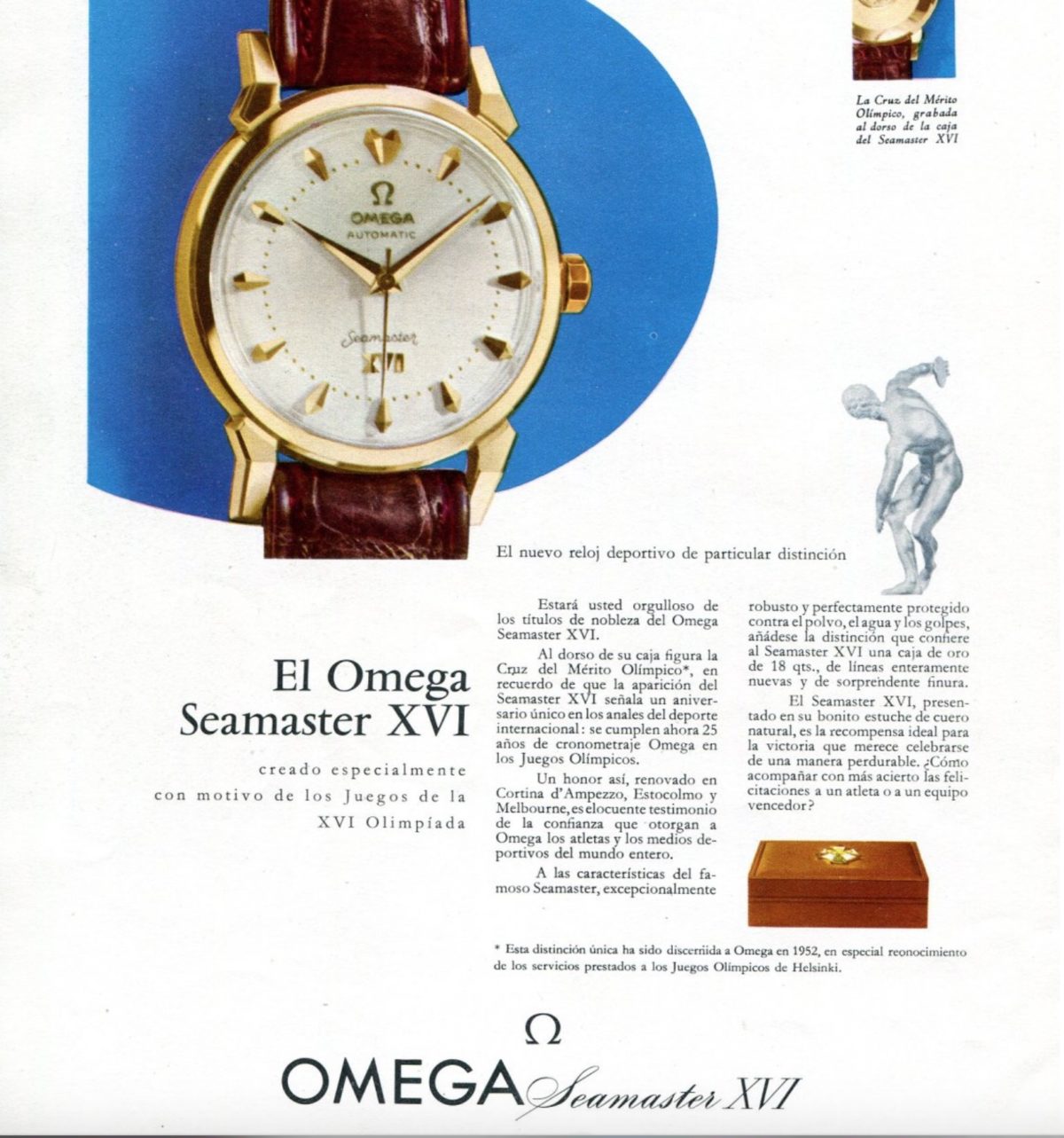 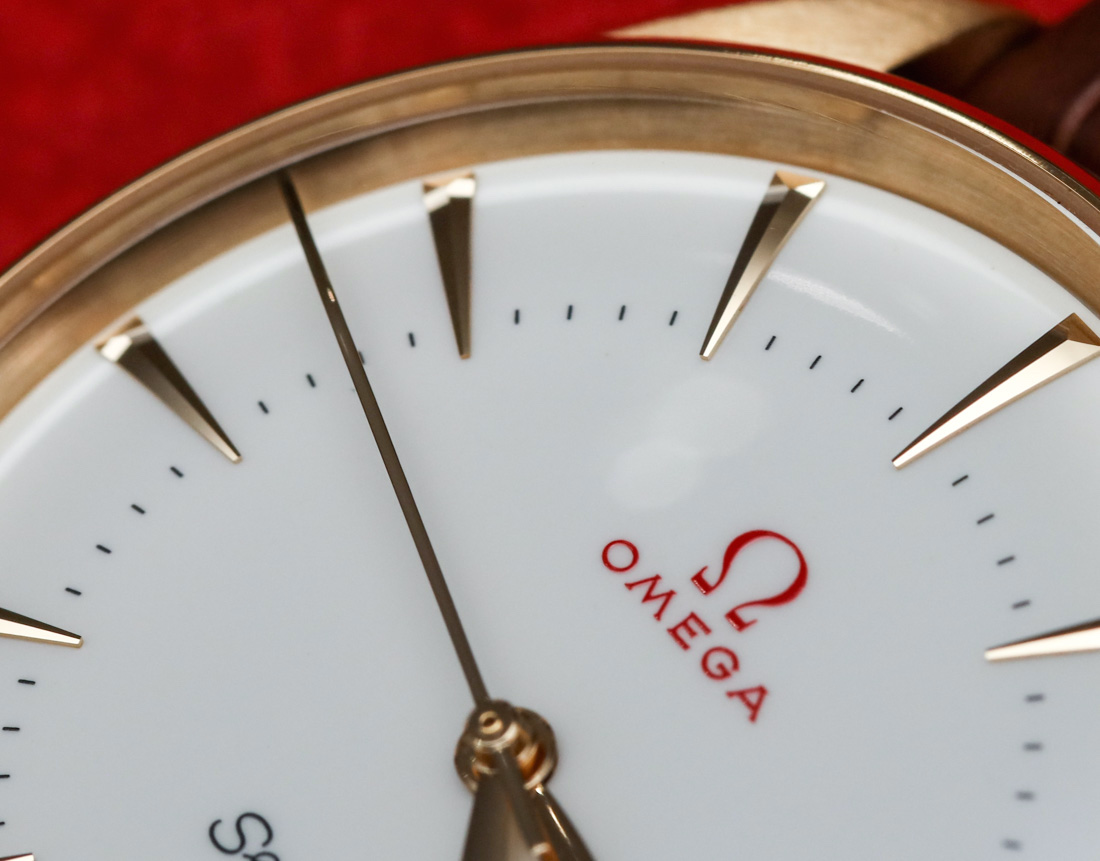 On a more petty note, the only thing I may have done without is the enamel minute track on the inside tips of the indices. I feel it breaks up the dial and takes away from the overall continuity and simplicity of the watch. I think they would have served much better aesthetically around the perimeter of the dial so they didn’t break up the beautifully finished leaf handset – though I understand where it could be argued that it would take away from the domed dial. That being said, looking at some vintage Omega Seamaster Olympics ads (inserted above and throughout this article), it’s clear that this minute track is firmly rooted in the brand’s specific history with both this watch and event. 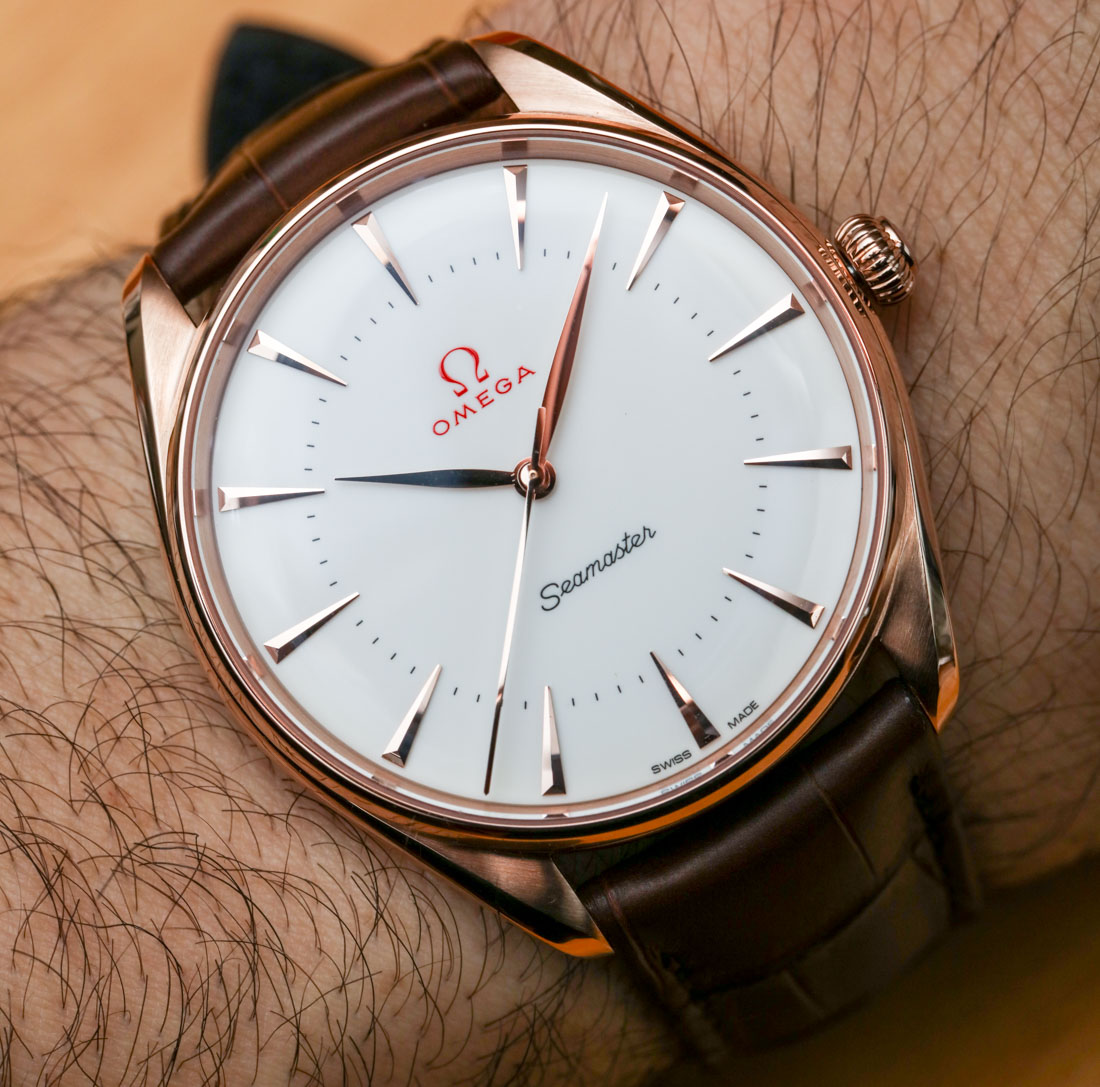 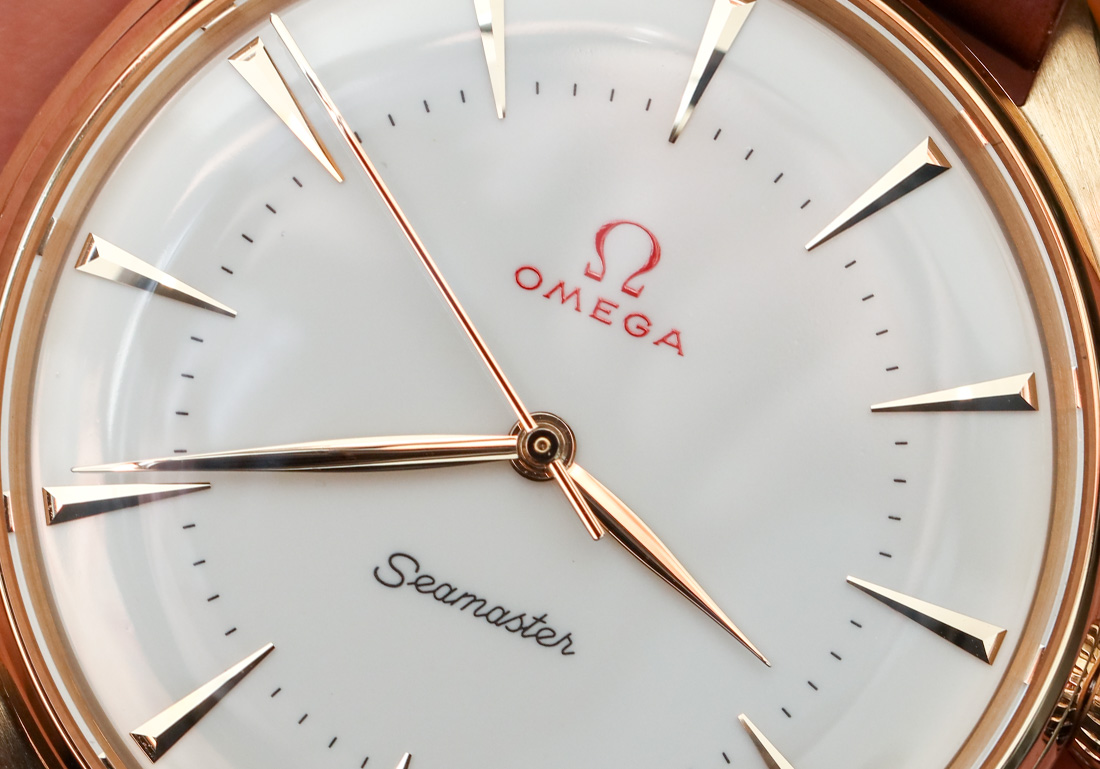 The handset is the perfect length for the dial and overall legibility of the watch. The hour hand almost microscopically reaches the end of the indices, and the minute hand overlaps them just enough to create a slight gap between the tip and the edge of the dial, which I feel would benefit from the minute track instead of the blank space. The seconds hand extends a few millimeters longer than the minute hand and comes just about to the edge of the dial. As ridiculous as it may seem to linger on the handset, it’s one of the factors that can make or break a simple three-hand watch for a lot of potential buyers, myself included. Succumbing to a handset that’s too long or too short (as I’ve seen with a number of Aqua Terra models) is easy to do in this segment and I’m always impressed by a well finished, and well-measured dress watch handset. 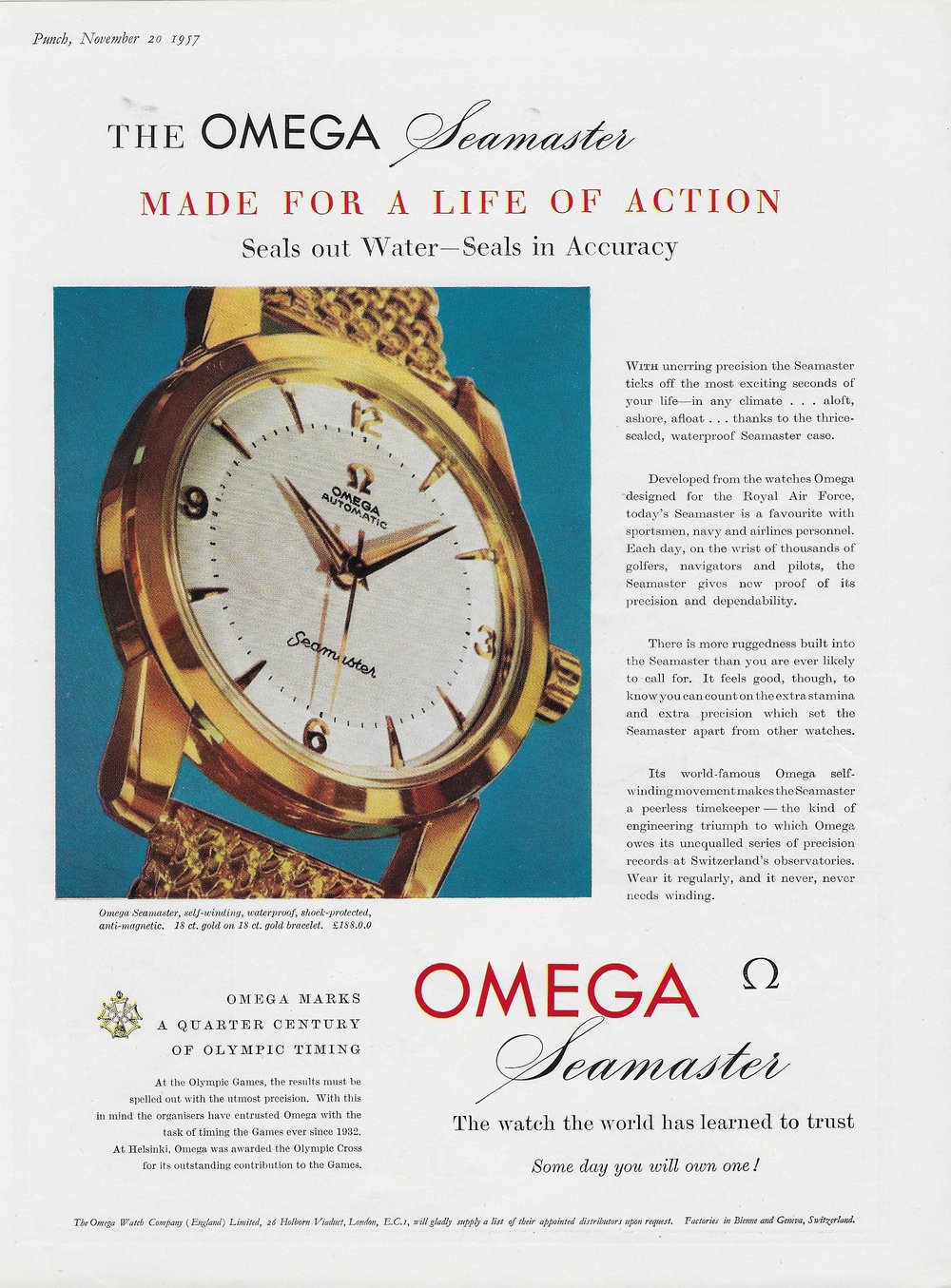 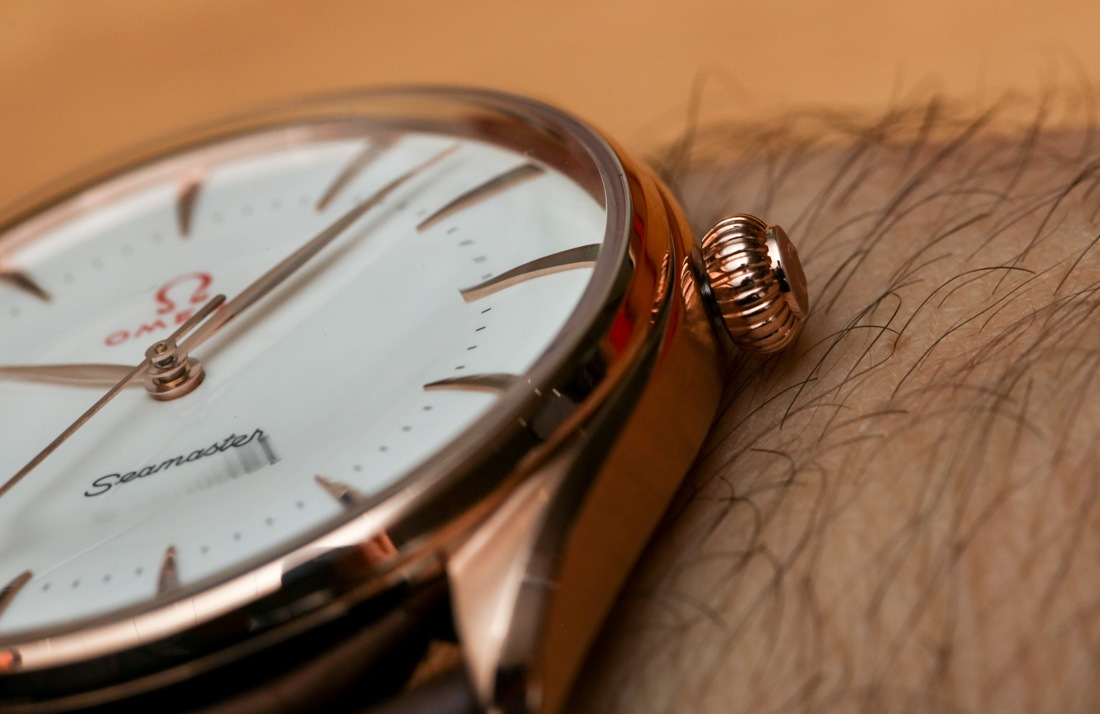 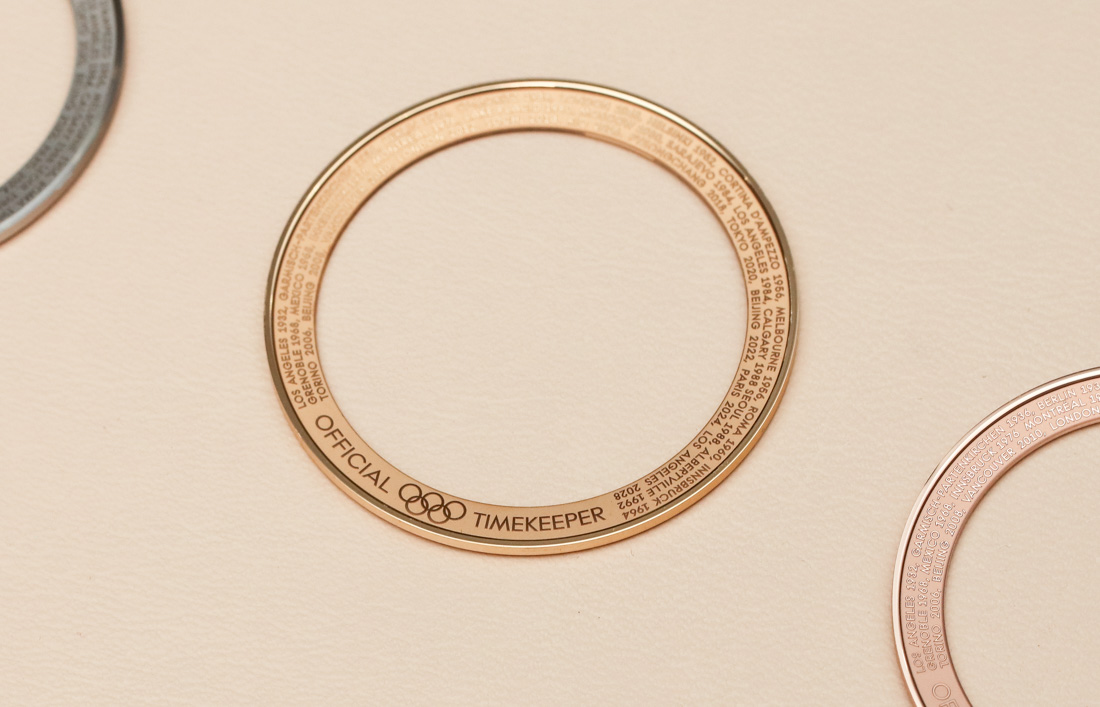 Prominently on the dial, and printed in enamel, is the Omega logo in red which has been used only on Olympic watches like the pocket watch. I love that this subtle, yet immediately clear nod is the only thing on the dial that gives the true DNA of the watch away. As mentioned earlier, the case will come in three gold alloys – Omega’s Sedna (pink) gold, yellow gold, and a new Canopus Gold. The case itself is polished and the small onion crown is a perfect size for the collection. One of the coolest features (and unfortunately, we didn’t get to see it) is Omega’s Canopus gold. Aptly named (I assume) after the brightest star in the constellation of Carina (you’re absolutely right, I don’t get out much), Omega claims this alloy is exclusive to the brand, brighter, and doesn’t get discolored nearly as fast as traditional white gold. We’ve seen the same claims and chemical wizardry with Omega’s Senda gold pictured here. I don’t currently have the information about what material compounds are added to support these claims, but I imagine it’ll be released in the near future. 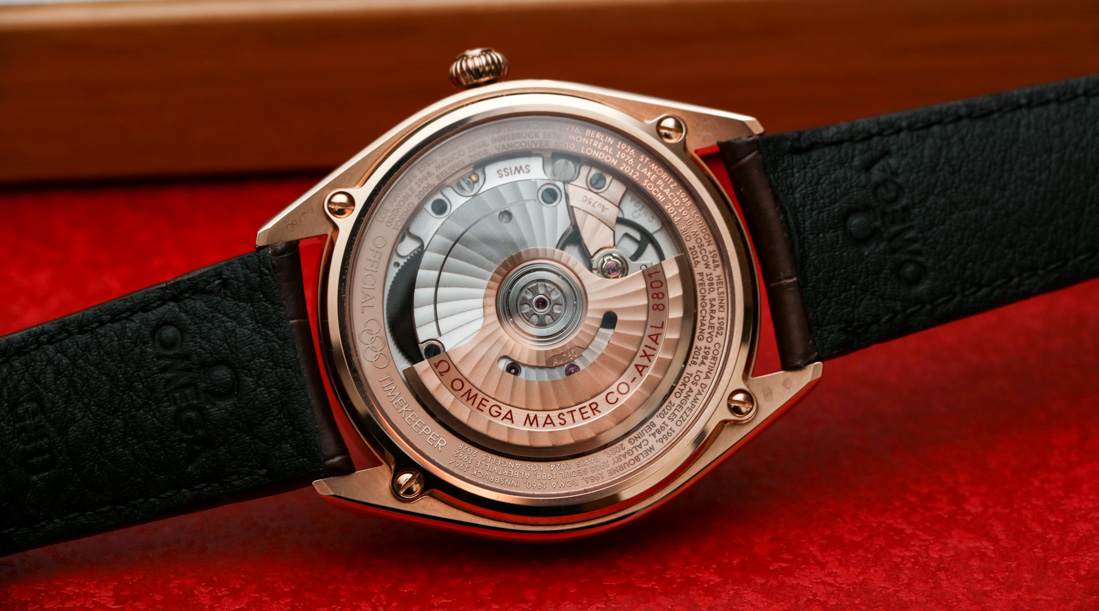 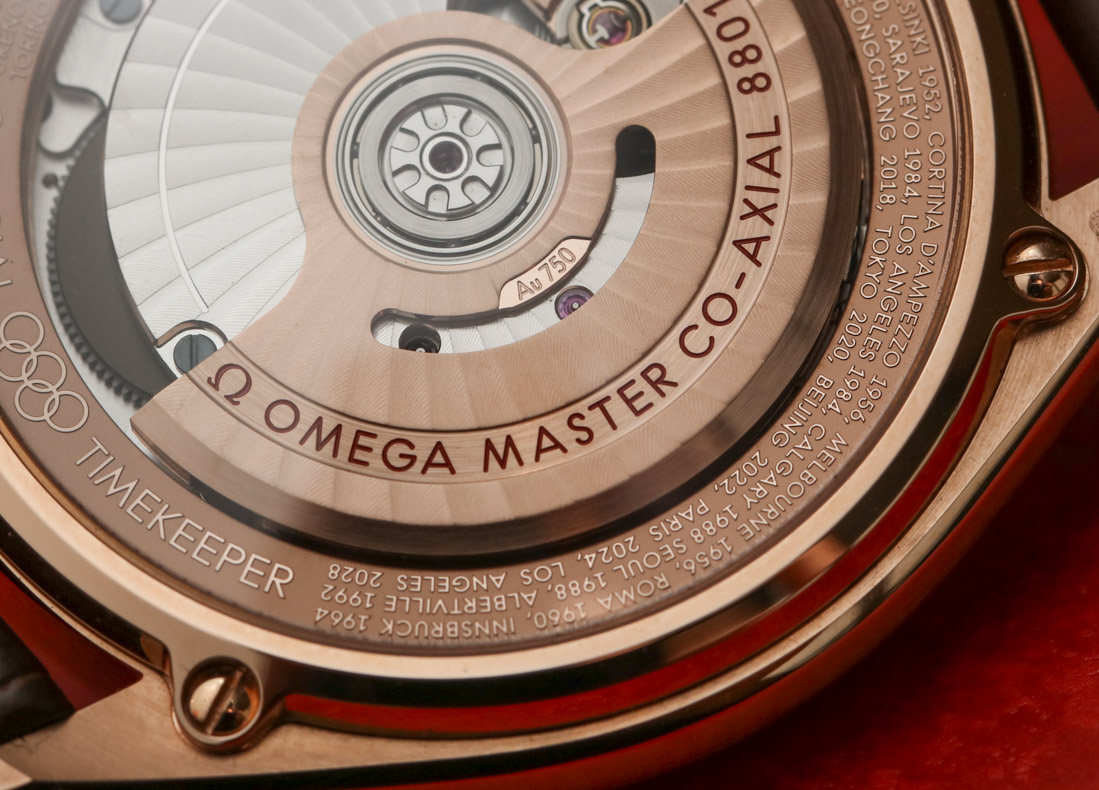 Flipping the watch over, you get a glimpse of what makes this a quintessential Olympic watch but also a contemporary Omega timepiece. Fitted to the perimeter of the exhibition caseback is an 18k gold ring stamped with all of the known Olympic host cities since 1932, on up to Los Angeles 2028 – perhaps jumping the gun a little bit. While I will admit that it requires a magnifying glass for me to read them all, the Olympic nod is refined and not too loud, giving the watch a more universal appeal – especially for buyers who aren’t in the market for an Olympic watch. 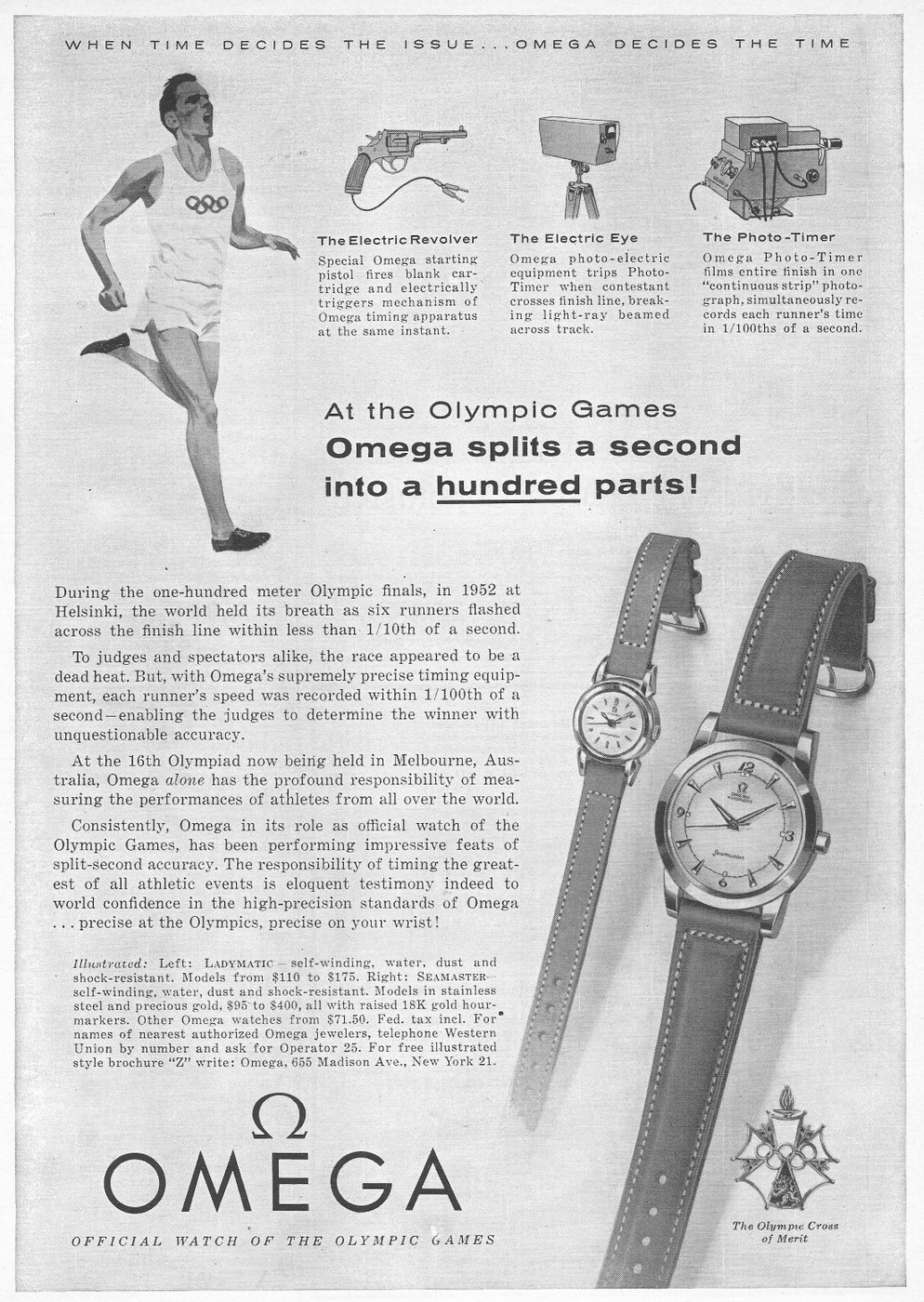 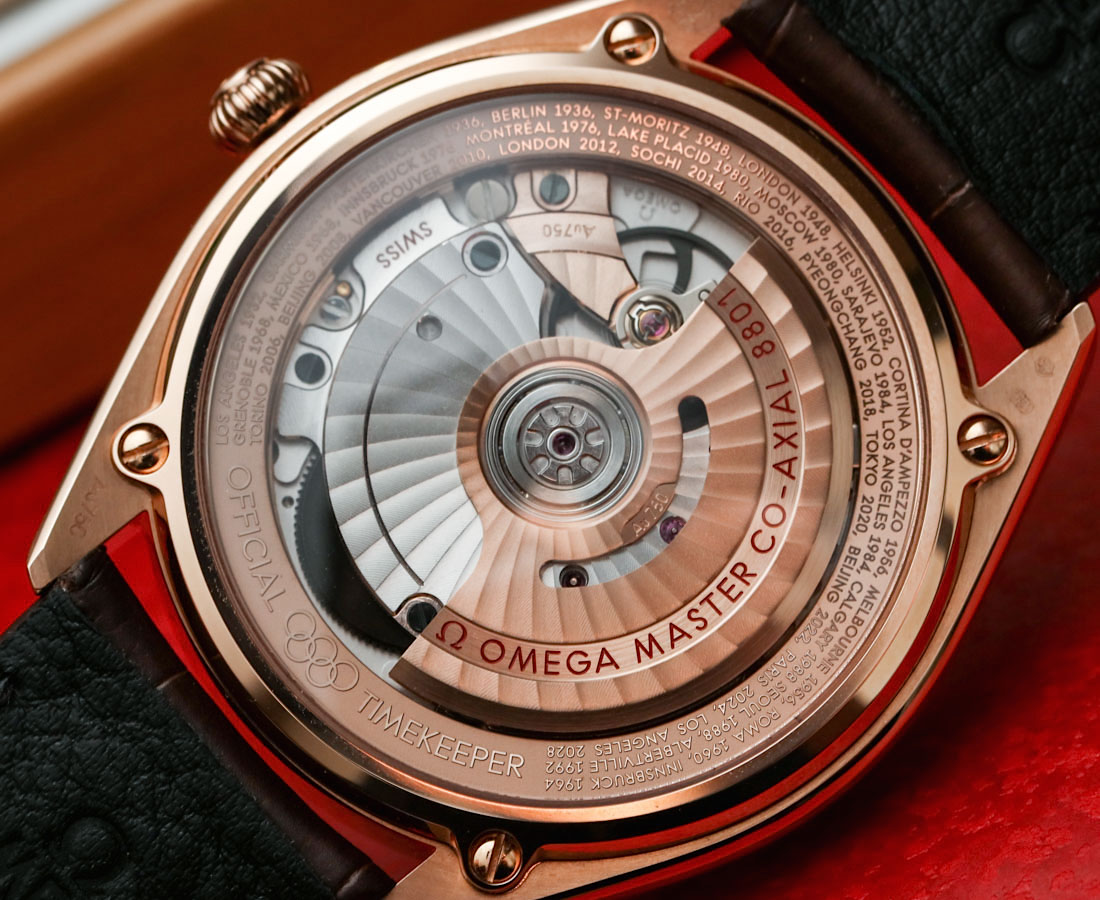 Through the Olympic ring, you will see the Omega Master Chronometer Calibre 8807, Omega’s time only, METAS-certified Co-Axial movement. Based on the 8800 (which features a date at 6 o’clock), the 29mm movement was mostly found in the 34mm ladies’ Aqua Terra 150M line. Because the movement is so small and doesn’t include the date module, it is a perfect contender for the Olympic Gold Collection. Unlike its 8800 base, the 8807 features a Sedna gold rotor and bridge tying in the Sedna model beautifully. The 35 jewel self-winding movement features a 55 hour power reserve and the standard Omega “Geneva Waves” in a circular pattern. 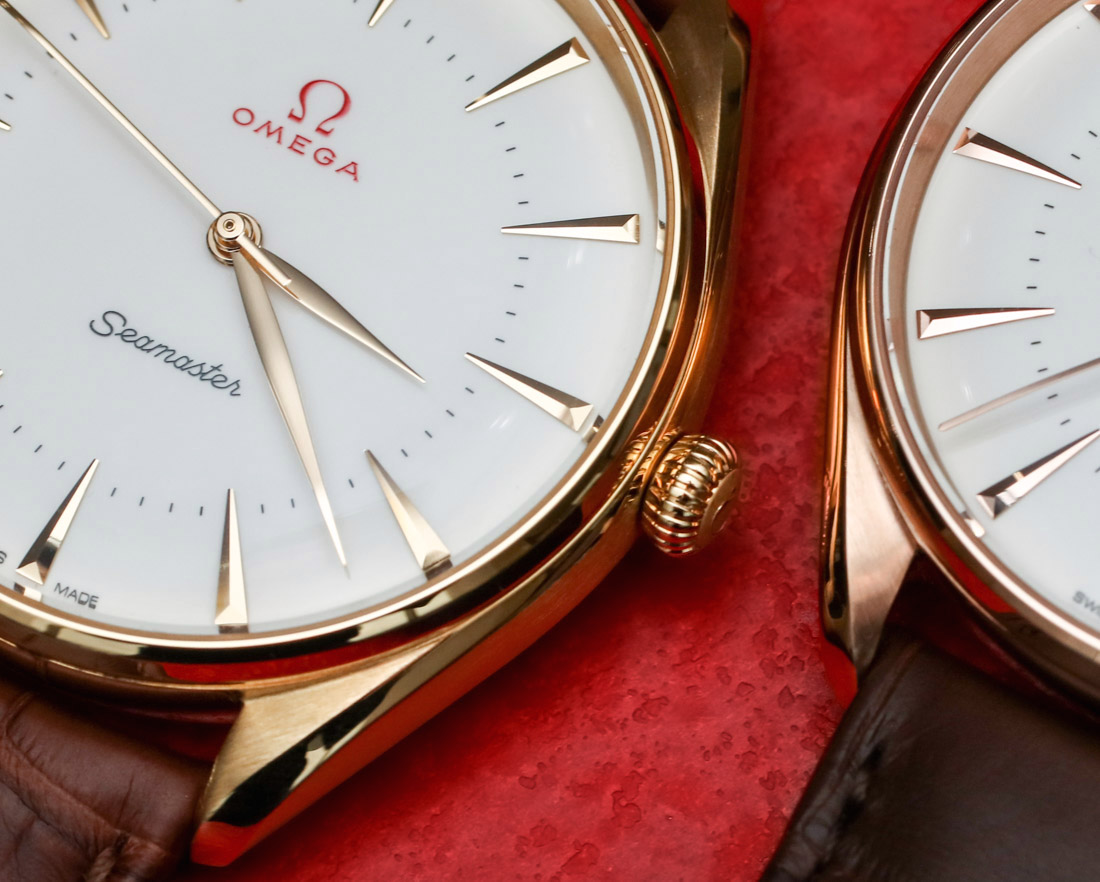 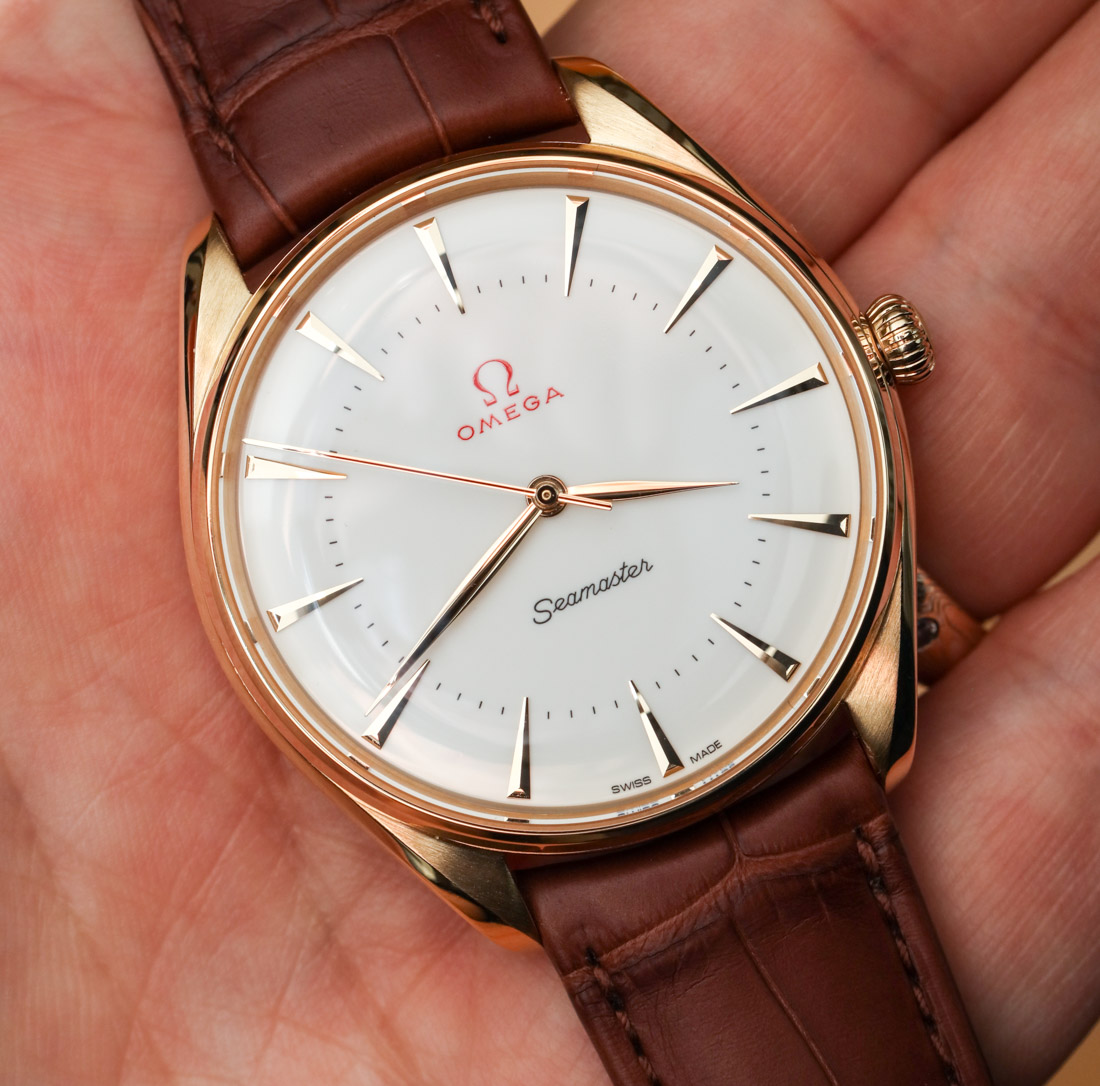 The concept of utilizing different hues of gold alloy to channel the Olympic medals is really cool, however, and to be completely honest, this is simply a well executed and superbly crafted dress watch – Olympic themed or not. Even outside of the Olympic Collection’s umbrella, I feel these watches would do well among collectors and enthusiasts with (very) deep pockets for a dress watch. And the addition of the Canopus gold alloy is going to add an additional level of appeal for those collectors who may not otherwise be looking to add another dress watch to their collection. If the Omega Seamaster Olympic Games Edition released a few weeks ago will age more gracefully than previous collections, the Omega Seamaster Olympic Gold Collection (whew) will be around for a lot longer. 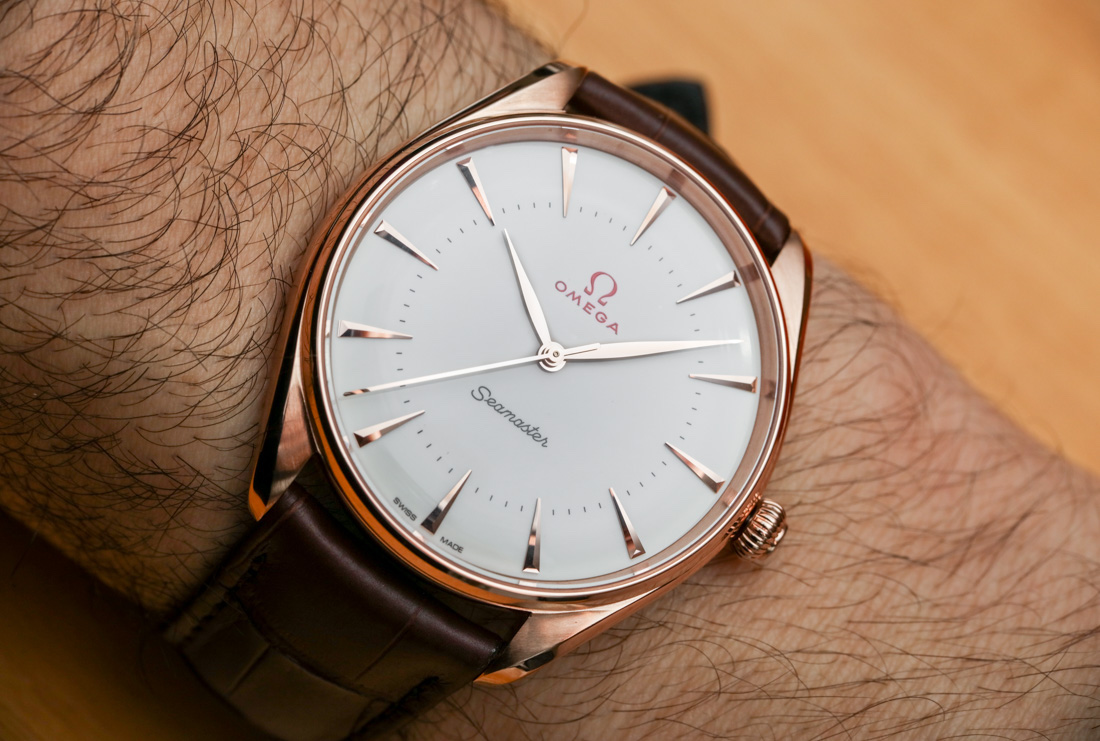 The design restraint shown on the dial here is a success conceptually and in execution. I’d love to see a steel non-limited version that still retains the Olympics-associated red logo (so, basically only changing caseback text and leaving the dial as-is). It’s not like the watch enthusiast community has ever gone totally bonkers over something as seemingly banal and mundane as introducing red text on a dial.

Price for the Omega Seamaster Olympic Gold collection is 17,500 CHF for the Canopus gold model, and 16,000 CHF for the Yellow and Sedna gold models. While that may seem a bit steep, it’s on par with Omega’s Constellation collection in Sedna or White Gold. omegawatches.com