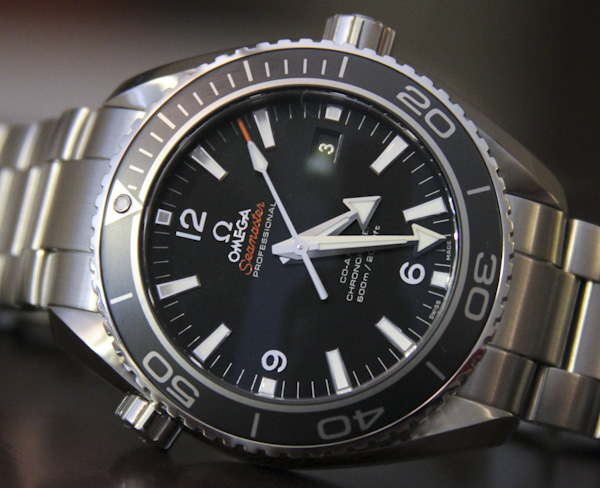 I recently learned an interesting fact regarding the history of the Omega Seamaster collection. The Seamaster and Seamaster Planet Oceans that we know today are hardy tool watches suitable for diving, James Bond, and overall feeling like high-function instruments that is made really well. You’d think these pieces started out as serious dive watches. That isn’t the case actually. When the first Seamaster watches came out, Omega had other pieces in its collection that were more focused on sport. The Seamaster was meant to be a fashionable watch that one could wear up in the Hamptons while playing with their kids and not worry if it got splashed on. It was meant to be a luxury watch from day one.

Overtime the Seamaster became an icon and important watch for Omega – especially as the brand continued to focus on a range of important high-intensity activities from racing to diving, and everything else where sturdy and reliable watches were needed (not to mention space travel). Flash-forward to now and we have an incredibly wide range of Seamaster watches, and its higher-end cousin the Seamaster Planet Ocean. For review I am checking out two 2011 Seamaster Planet Ocean Co-Axial Chronometer watches which well represent where the collection and brand are at today. 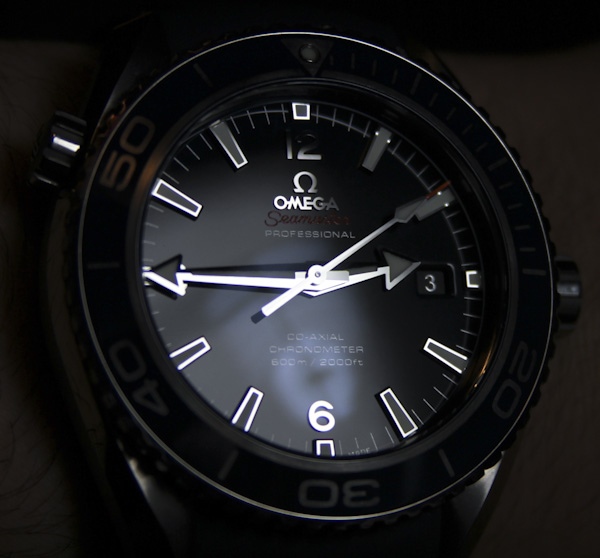 In short the Seamaster Planet Ocean Co-Axial Chronometer of today comes in over 20 references, is available in 42mm wide or 45.5mm wide cases, and is available with blue or black dials with various color differences. Inside is an in-house made Omega movement, and it is a comfortable beauty on the wrist.

The “Co-Axial Chronometer” part of the watch name separates these Planet Ocean watches from others that do not contain the Omega produced caliber 8500 movements. The other new Omega Seamaster Planet Ocean watches with in-house made movements are the Seamaster Planet Ocean Co-Axial Chronometer Chronograph watches that contain Omega’s caliber 9300 automatic chronograph movements. Those are excellent pieces, with fantastic movements, but I personally like my dive watches three-handed. For a super chrono, Omega has the Speedmaster which now also comes with the 9300 movement. 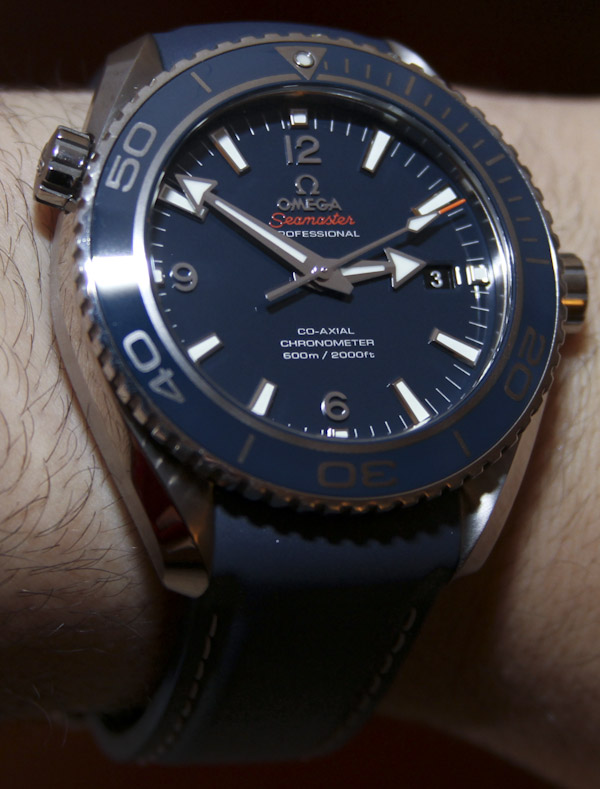 I got to visit Omega and see the caliber 8500 movements being produced. Debuted in 2007, these large diameter movements are made for big watches and are amazing instruments that come from one of the most sophisticated timepiece movement assembly lines ever created. The need for such a production line is due to the fact that Omega must (relatively speaking) mass produce these – but with a very high quality output. They use a very cool automated assembly line that combines mostly human labor with robots that help with precision tasks. It takes about a full day to assemble and test just one 8500 movement. The movements are then sent to COSC for Chronometer testing, which takes another three weeks.

Aside from looking great, the 8500 has a few notable facts that any potential buyer would like to know about. Let me first add that Omega has the movements displayed through sapphire casebacks on the Seamaster Planet Ocean watches. This is no simple task as the watches still need to be water resistant to 600 meters. Usually dive watches have solid casebacks – but not here. The 8500 has dual mainspring barrels and a power reserve of about 60 hours. It has a DLC coated black balance wheel that is free sprung, and of course a co-axial escapement. The automatic rotor winds the movement when spinning in both directions, and when adjusting the time, you can set the hours in one hour increments to make it easy while traveling. I wasn’t sure about this before, but the 8500 movement also is equipped with a silicon balance spring which should be a major plus. Oh, and there is also the 8501 movement which is the same but with am 18k rose gold rotor and balance wheel bridge. You’ll find that in Seamaster PO watches with gold cases mostly. 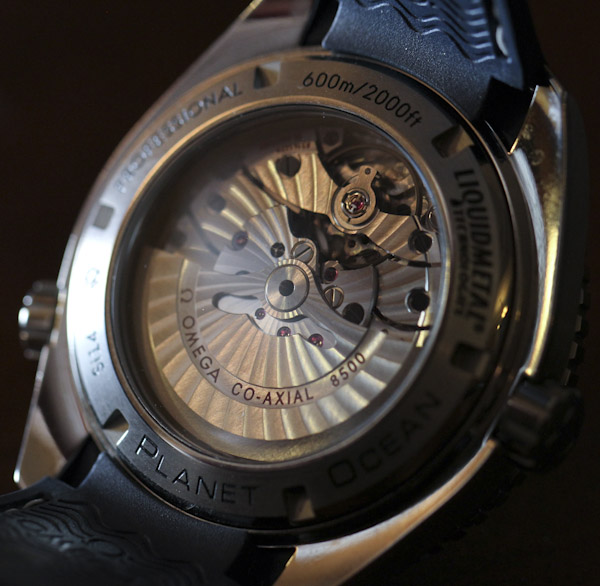 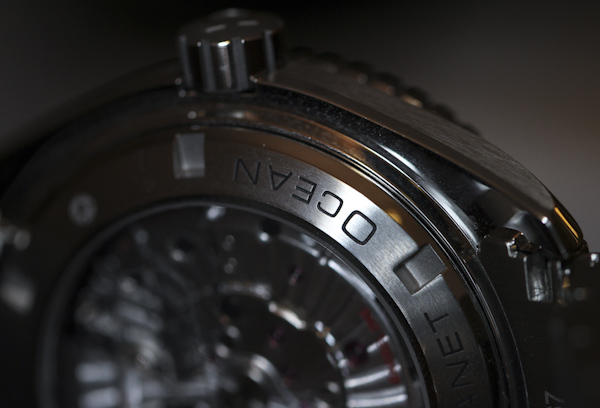 The movement is great and certainly a major selling point of the watch. The wavy polished lines on the movement surfaces are very tasteful. For review I checked out two Omega Seamaster Planet Ocean watches. Both 45.5mm wide and one with the steel case and black dial, and the other in the titanium case with a blue dial. Both had ceramic bezels, but the blue model has Omega’s very special Liquid Metal ceramic bezel (explained more here). Omega also makes smaller 42mm wide models of the Seamaster PO. This is a good thing for the “world market,” but I like the larger sized 45.5mm wide models best myself. It helps that the Seamaster PO case design features shorter lugs which helps keep the watch look good on smaller sized wrists.

The steel case is very solid and well-made, but also heavy. On the steel bracelet this is a hefty watch. Not an issue for me at all, but some will prefer a lighter timepiece. Those people have two options. First they can opt for Omega’s excellent rubber strap with deployment clasp, or there is the titanium Seamaster PO with the blue dial. This one features either a titanium bracelet or rubber clasp. Let me again say that the rubber they use is among the best I’ve ever had. Wonderful look and feel, and the clasp works really nicely. 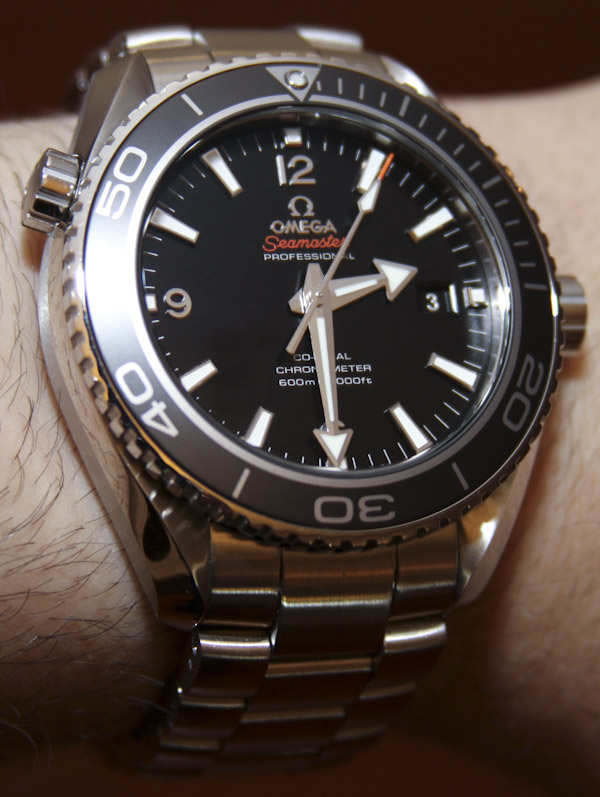 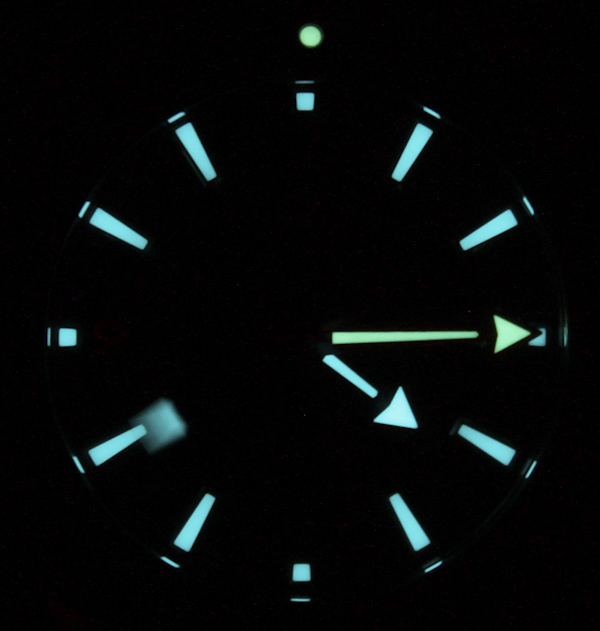 The famous PO bracelet is a beautiful thing to look at and wears nicely. It does however lack the ability to micro-adjust the size. This means that it could offer the perfect fit, but also possibly be just a bit too large or small as you can only add and remove whole links. There might be a half-link option, but I am not sure. The design of the case and bracelet means that it should be comfortable if it is a bit looser than you might like, but purists like me want a precision fit. Omega sees the Planet Ocean as a Rolex Submariner competitor (and they are similar in price for the high-end POs). The Submariner does have a more sophisticated bracelet – so I would be surprised if Omega wasn’t working on a new bracelet clasp for use in the future. The deployment clasp is push-button and operated very smoothly.

So wearing the watch is overall really good, but what about reading it? Omega has long since been perfecting the dial of the Planet Ocean, but surprisingly it has remained very true to Omega watch dials from many decades ago. It is a retro dial that you’d never know is retro. The double broad arrow hands are well defined and properly sized. Arabic numerals mixed with large applied hour markers made for a handsome and very easy to read look. Those Arabic numerals come in orange on some other versions of the same watch. The dial has pretty much everything you need, and very little you to not. It is a very good balance of information markers and empty space – a virtue Omega has held for a long time. 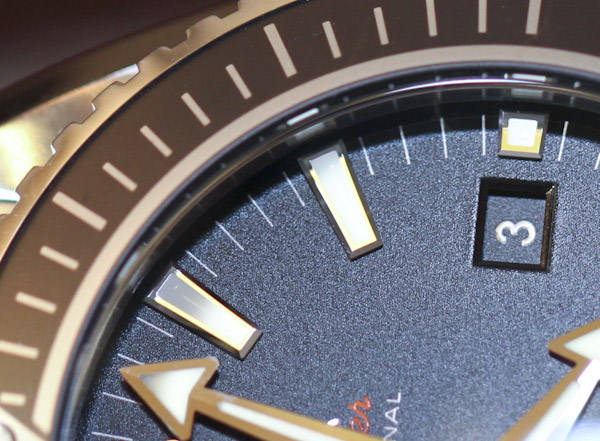 The black dialed version is actually textured – though you need to see it in the right light. The blue dialed version is more flat and glossy. I have to say that as good as the AR on the slightly domed sapphire crystal was – these dials proved to be a pain to photograph. Which is odd as they are really clear to the eye. This likely has to do with the mixture of matte and shiny elements on the dial (Omega does like to hint at bling a bit). Speaking of the sapphire crystal – it is very evenly cut and offers no discernible distortion when viewed at from extreme angles. The date windows are further done nicely. They have matching colors to the black dial and raised silver numerals – a great detail point.

Lume is beyond excellent for the watches. Much of the lume is richly applied blue SuperLumiNova, but the minute hand and bezel pip are green. This color difference assists with darkness viewing. Overall Omega has does a lot of things to make the watch easy to read. Ceramic bezels are very nice because they offer a high level of durability. Both of these watches are ceramic bezels, but the blue one on the titanium watch is more sophisticated due to it being liquid metal. These is a link to what that is above. The black ceramic bezel is actually dark gray if you look closely, and it has the indicators somehow printed on the ceramic. Not sure exactly how it works. As Omega is able to industrialize the Liquidmetal process more in the future, I anticipate it being as hot a word on Omega watches as “Co-Axial” is. 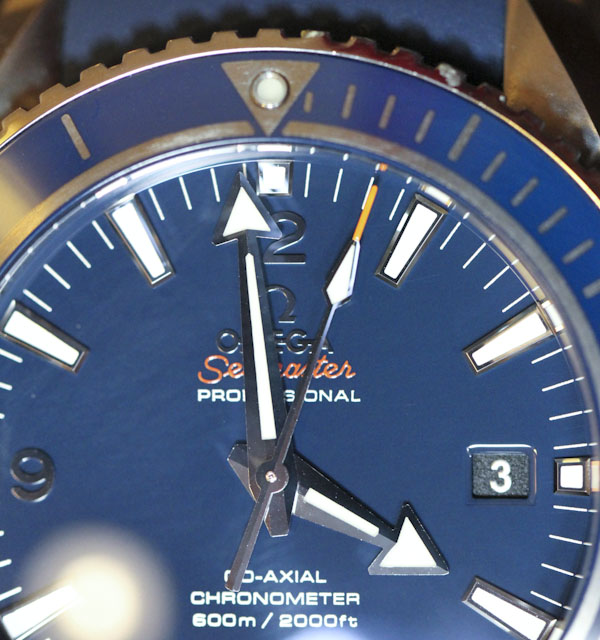 For the rare diver who actually does submerge with a mechanical watch (as opposed to a dive computer) then feel free to bring PO along. For a long time Omega has retained the external helium release value on the side of the case. That with 600 meters (about 2000 feet) of water resistance and the Seamaster PO can go just about anywhere. The helium release valve is a bit funny because it is mostly here to add a bit of “cred” to the watch as well as offer an addition crown that makes the watch look cool. Call it extra-functionality or vestigial – it doesn’t matter. It is a feature you’ll never use but somehow feel better about having it in your watch.

As a daily wear or occasional sport piece the Seamaster Planet Ocean just always seems to fit the bill. I really enjoyed my time with this piece and can easily say that it among the best mass-produced high-end dive watches out there. There is little lacking and a lot of good stuff here. From a comfy fit, to a great movement, Omega in the end seals the deal with a very pretty face. It isn’t inexpensive however. The price for the Omega Seamaster Planet Ocean Co-Axial Chronometer watch ranges from $5,800 on the low-end up to $8,600 for the blue dialed titanium version on the titanium bracelet. The steel model with the steel bracelet is $6,200. There are even higher-end models in gold and with diamonds on the bezel that are $20,000 and over. Omega really offers a number of Seamaster Planet Ocean models to suit all tastes – mine included.