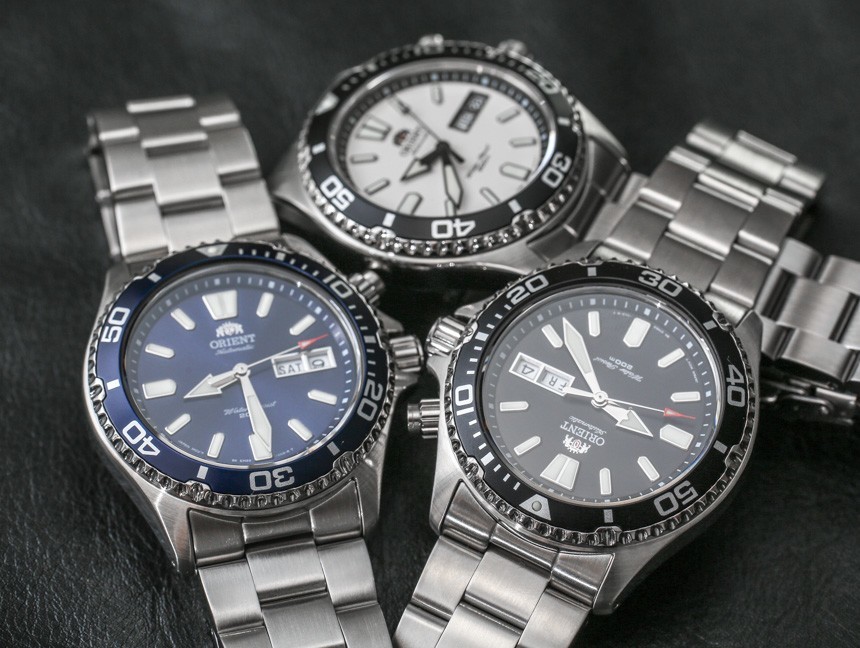 It isn’t a secret that aBlogtoWatch frequently recommends brands like Seiko and Orient for people who are interested in their first mechanical watch, or for those who merely want to get a lot of quality for the money from a mechanical watch that doesn’t cost as much as something from Switzerland. Orient is actually owned by Seiko’s parent entity, but the two companies are operated separately. This all brings me to a watch that many of you know and a lot of you probably want to know about, and that is the Orient Mako diver. Today, I review the newest version of the Mako diver known simply as the Mako USA – and I’ll explain why this helps take the value proposition of an Orient mechanical dive watch to a welcome new level. 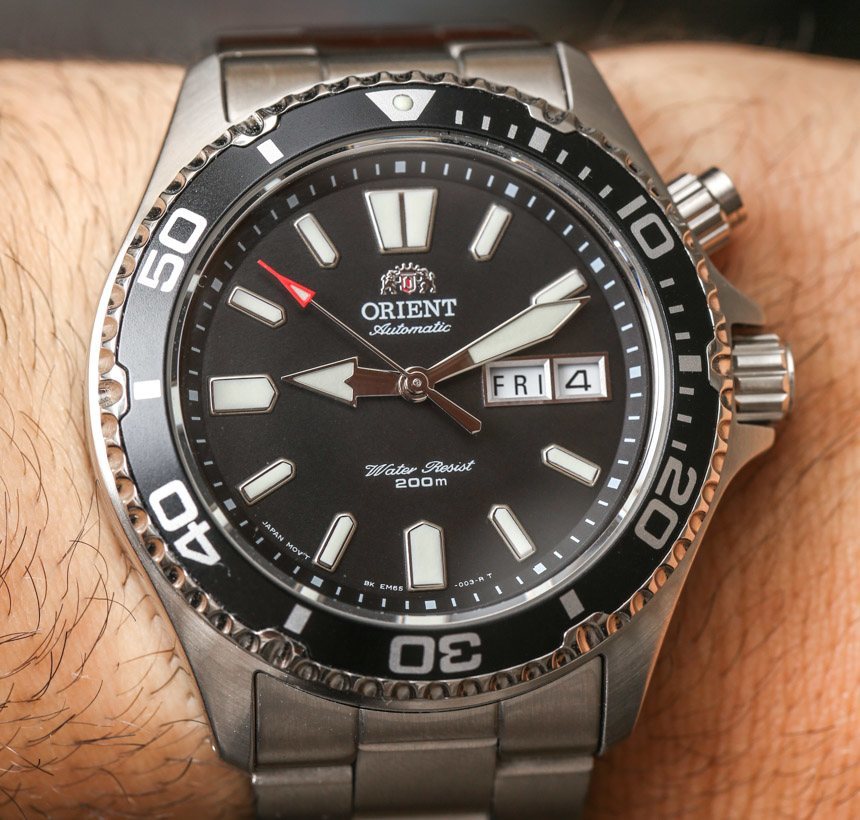 In short, the Orient Mako USA is an upgraded version of the Mako with some “wish list” features fans have been asking for, for years now, according to Orient USA. The watch will, however, be exclusively available through the Orient USA website (for now), but I believe they will ship internationally. So, let’s see what you can expect from one of these new reference FEM6500FB9, FEM6500GW9, or FEM6500HD9 Orient watches.

I originally reviewed the Orient Mako watch on aBlogtoWatch back in 2009 here. It is important to see how the Orient Mako USA looks compared to the standard Mako that is much more widely available. I wanted to mention a few thoughts about pricing, as this will cause a lot of confusion for people who visit the Orient USA website. What is confusing? Mostly the fact that the Orient Mako USA is the newest model, but also the least expensive model. What is that all about? 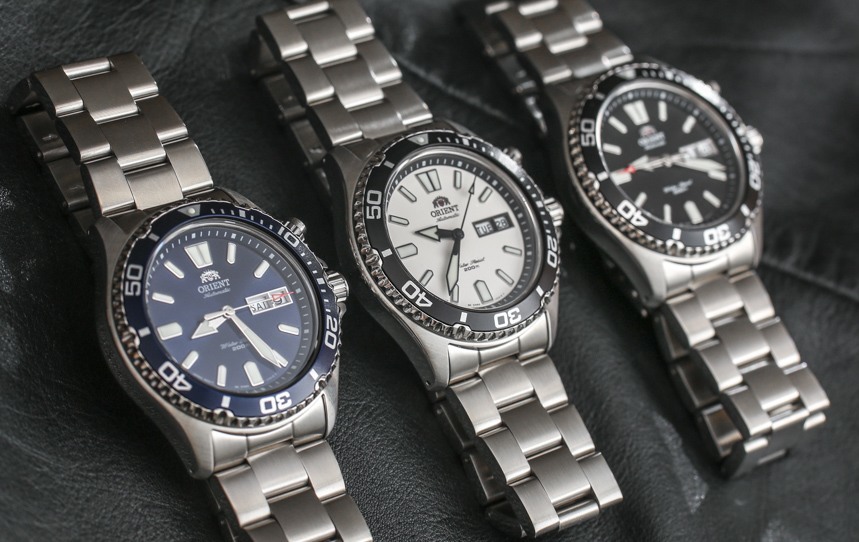 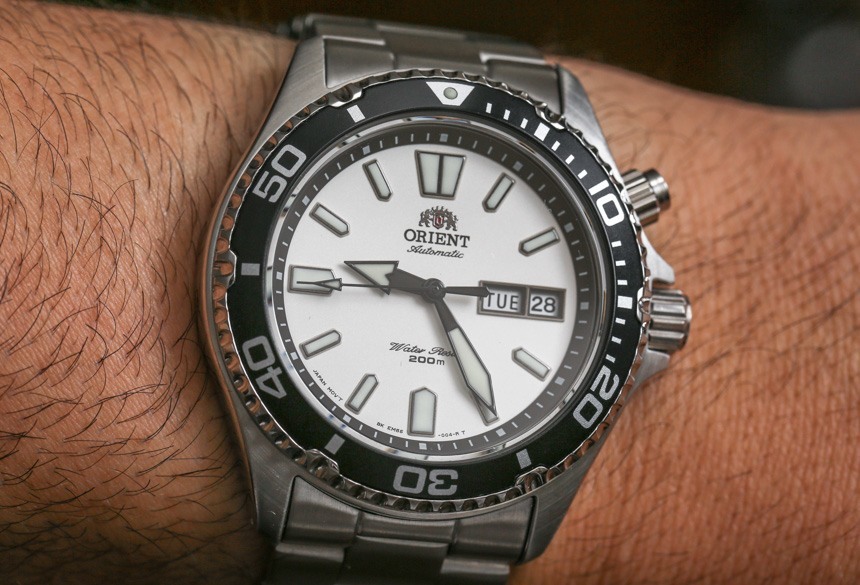 It actually has to do with the fact that since Orient watches are sold all around the world, there is a lot of price competition online. That means while the standard Orient CEM6500 Mako collection is priced at $285 on the Orient USA website, the “street price” is less. That same watch on Amazon.com is (currently) $133. The Orient Mako USA watch is not available for a lower price anywhere else, so the $225 cost is what you’ll pay – and at this price I think it is totally worth it even though there is a premium over the existing Mako model. 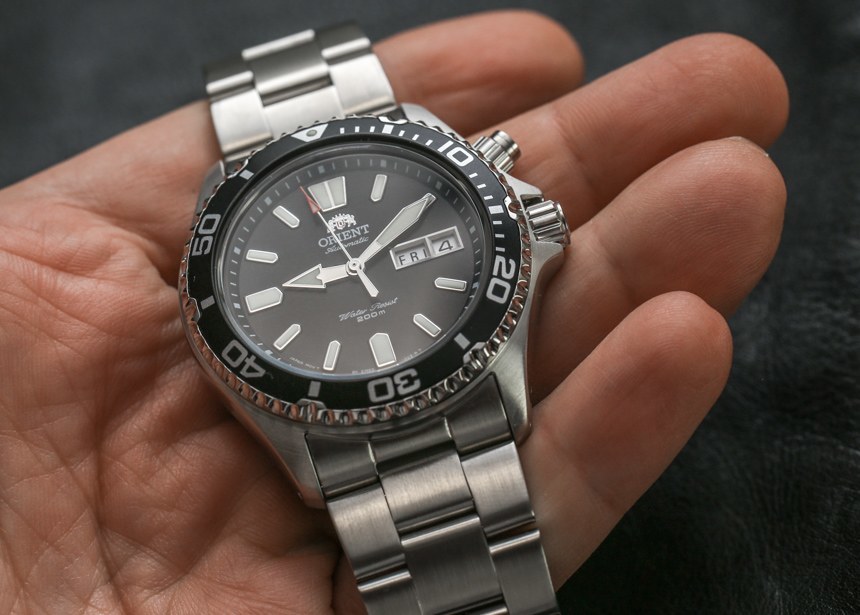 The Orient Mako is a decidedly Japanese mechanical 200 meter water resistant dive watch that many people love as a beater or general sports-activity watch. It looks good on the included steel metal bracelet, but people also like to put it on all types of straps. While there have been a range of dial colors out there, the Mako USA comes with a black, blue, or while dial (for now). What Orient USA was able to do with the Mako USA is to offer a lot of what people love in the Mako, but with a lot of little upgrades. The goal, of course, was to retain the popularity of the Mako in terms of design, as well as being a very “well-priced” mechanical dive watch. 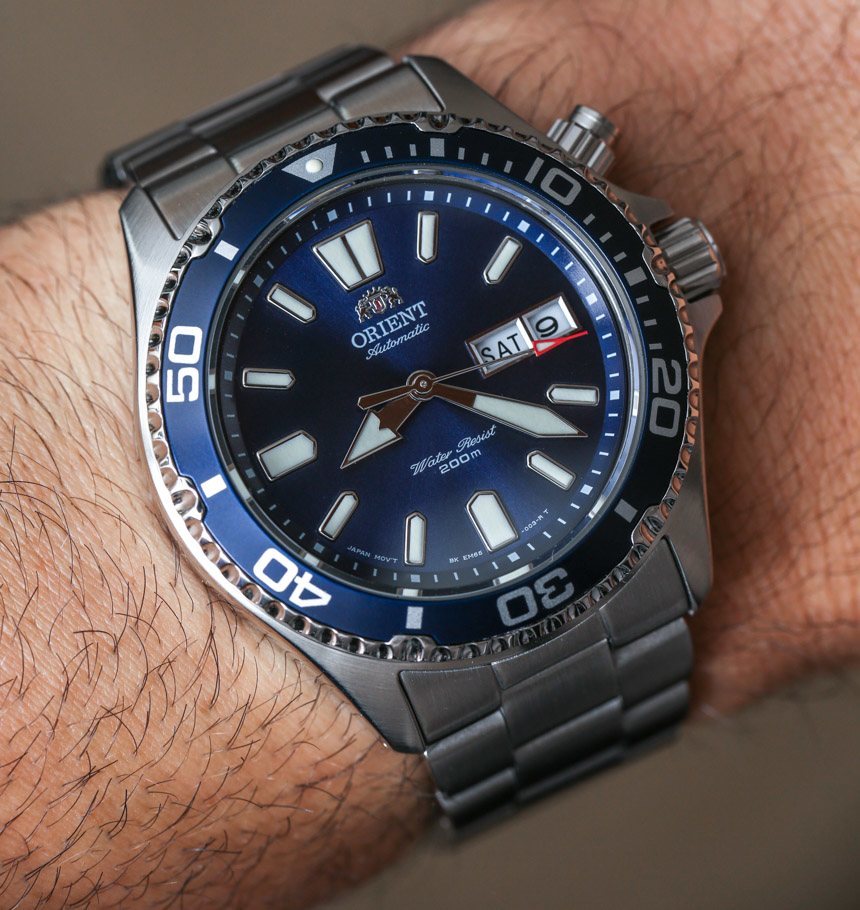 At 41.5mm wide, in steel the Mako USA fits the same dimensions as the outgoing Mako model (that is still available of course). At a glance it might even be easy to confuse the two watches. However, those familiar with the Mako collection will immediately notice the new dial and hand-set. The goal of the new dial wasn’t actually to randomly offer something new, but to increase the legibility of the Mako dial as well as to offer much enhanced luminant. In fact Orient refers to the lume as their “Nemoto LumiNova.” So the first major upgrade in addition to the improved legibility of the dial is the appreciably improved luminant. 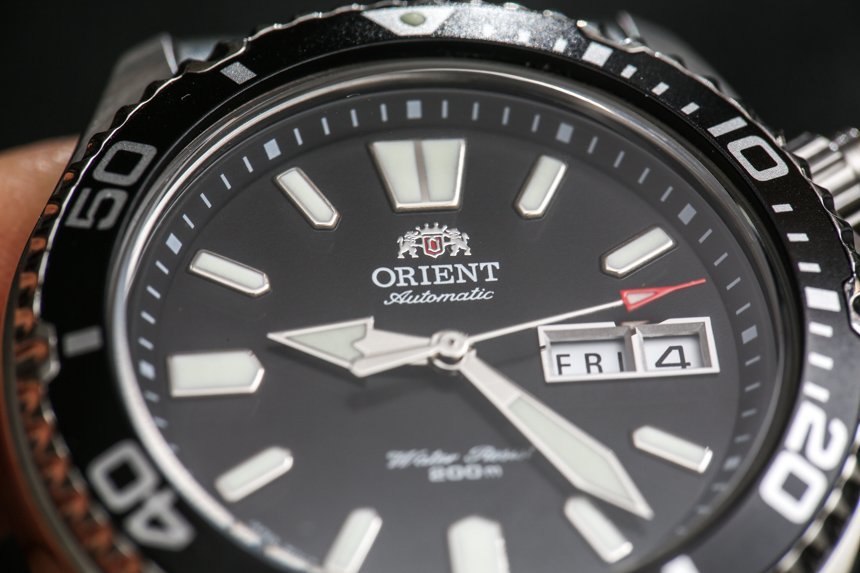 The new dial has larger hour indicators but none of them are Arabic numerals now. While that design element was a key part of why some people like the Mako, I think the value in this new dial is not only aesthetic elegance, but also offers people who already have a Mako watch a good reason to get something new which adds to their collection. 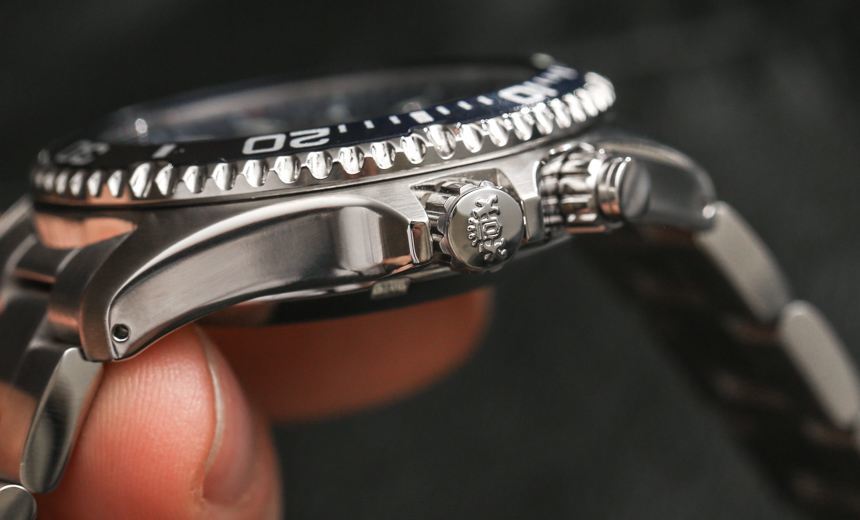 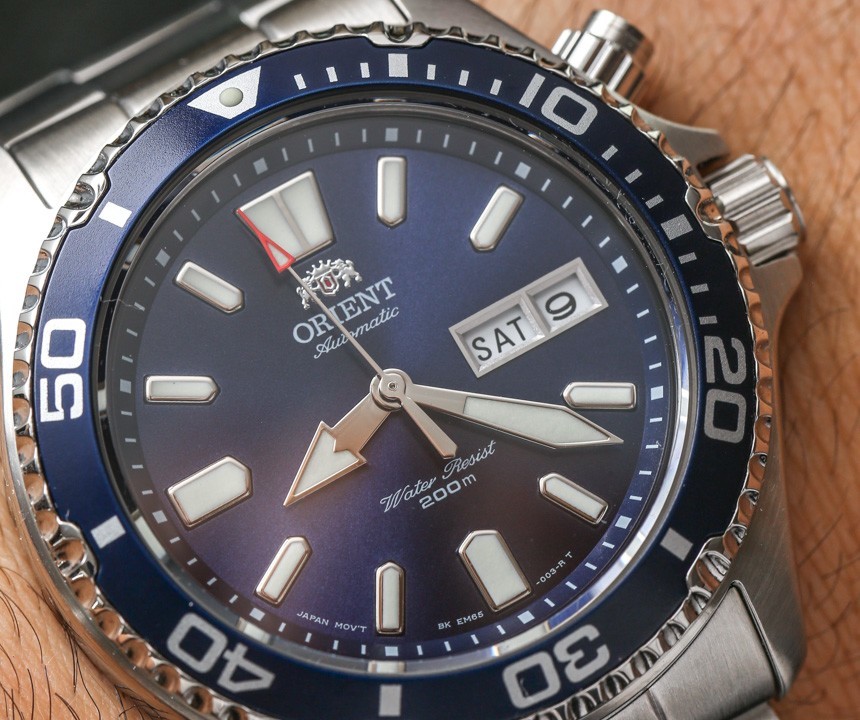 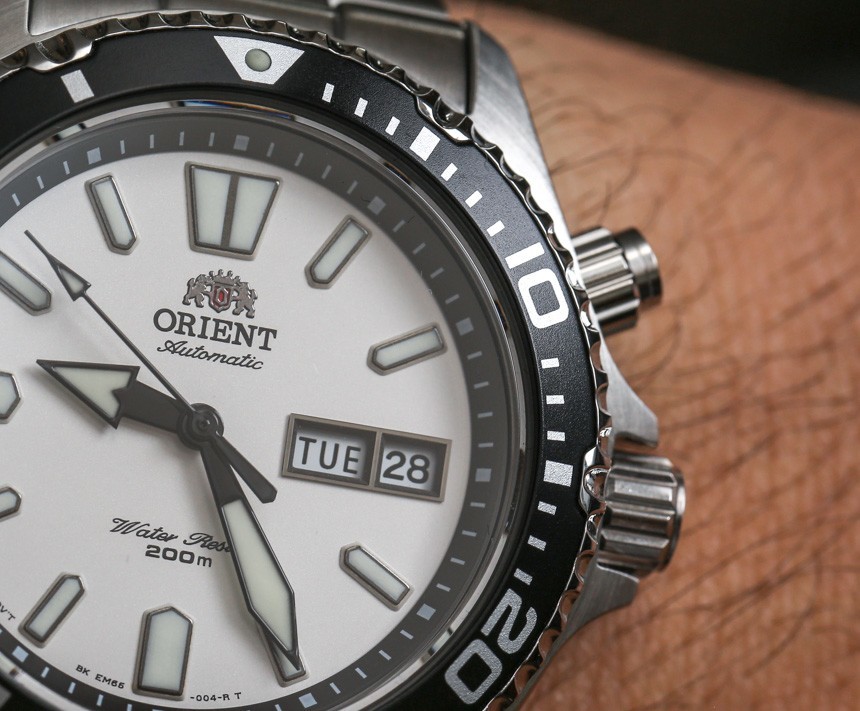 Little is changed about the case, but there are some notable changes. One change is an improved rotating bezel system. The 120-click bezel of the Mako USA turns more securely and solidly without the slight wobble that you get from the 60-click rotating bezel of the original Mako. Another change to the case, is drilled holes in the lugs which makes changing the straps better. Actually, some people prefer the lack of a spring bar hole in the lugs on the original Mako, but apparently enough people asked for spring bar holes in the lugs for the Mako USA. 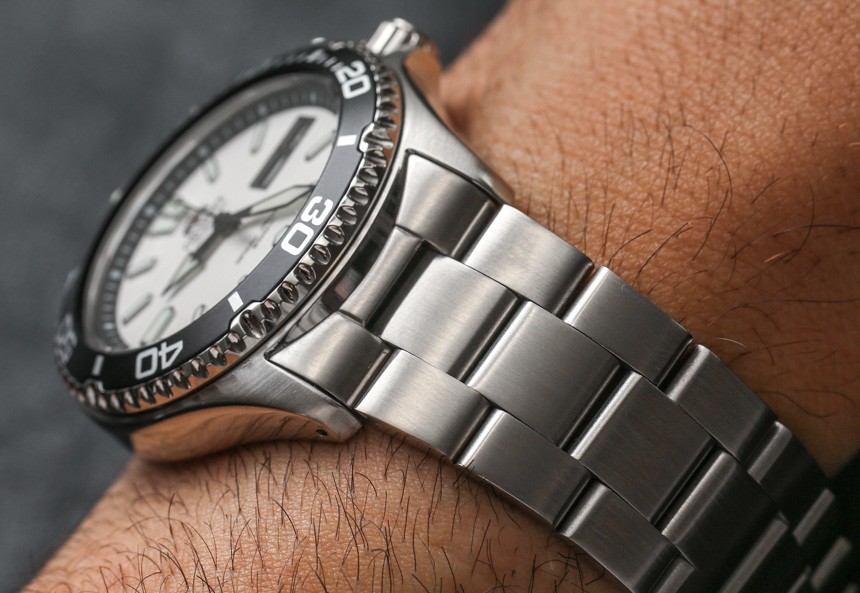 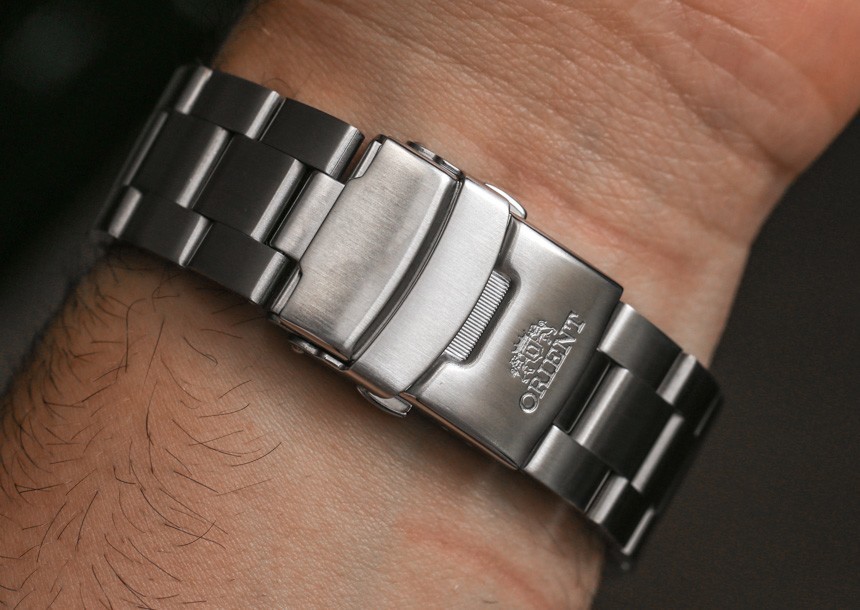 While the bracelet remains the same for the most part, the Mako USA now uses solid-end links. There have been a few “special” versions of the existing Mako that used solid end-links, but they were rare. Now, people know that the bracelet is going to be more secure and tight-feeling thanks to the use of solid end-links on the bracelet. In practice, this helps give the watch is a much more solid feel. Not that the Mako was ever a flimsy-feeling watch, but the Mako USA feels more hefty and reliable when held in your hand. 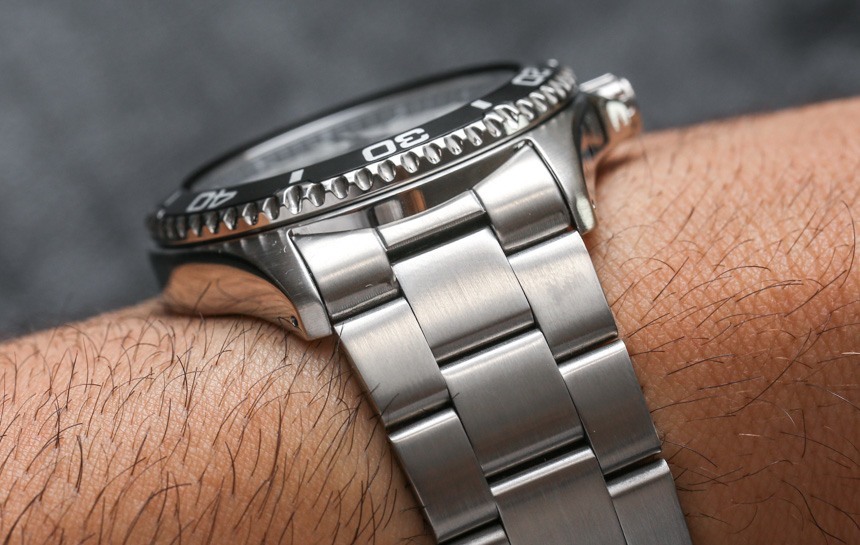 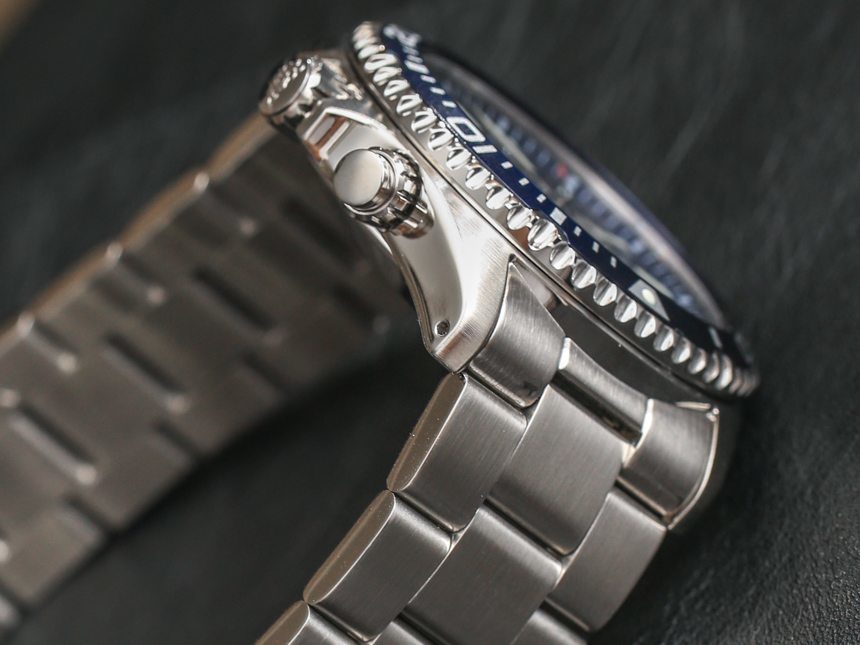 The 22mm wide three-link bracelet is classic and useful. It features a brushed surface with polished sides. One thing I would love to see one day is a new bracelet with tapering links. That might not even be an improvement visually, but I am curious to see what it would look like. Watches like the Rolex Submariner (aBlogtowatch review here) use bracelets that taper. The bracelet deployant clasp has a “triple-locking” feature which means that the bracelet snaps shut, has a folding clasp, and also uses pushers to release the bracelet. It uses mostly stamped metal parts, but for the money is excellent quality. 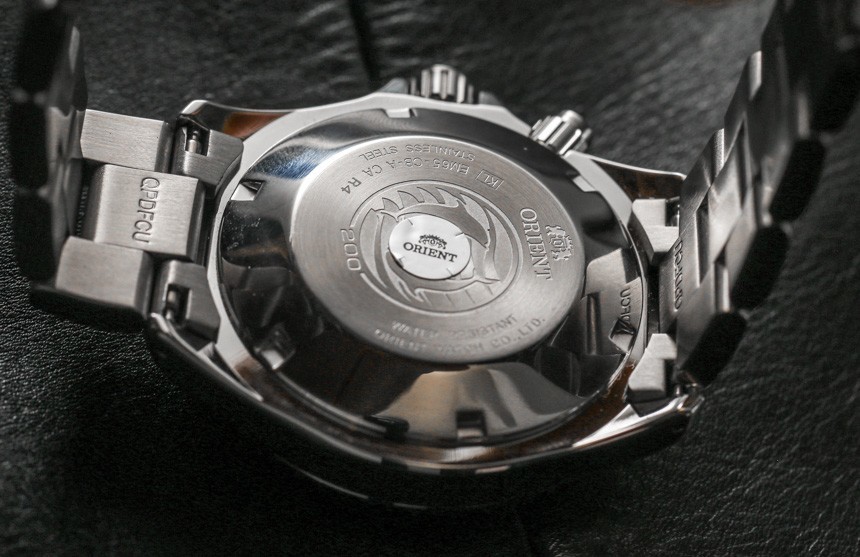 Inside the watch is the same movement that you’ll find in the original Orient Mako, which is the in-house, made-in-Japan automatic mechanical caliber 46943. This movement features the time with a day-date complication, but it doesn’t offer hand-winding. Thus, you can only wind the watch by wearing it, putting it on a winder, or spinning around the rotor manually. Orient has since come out with new automatic movements which do offer hand-winding and some other features. We will probably need to wait a few more years before anything like that finds its way into a Mako-priced timepiece. 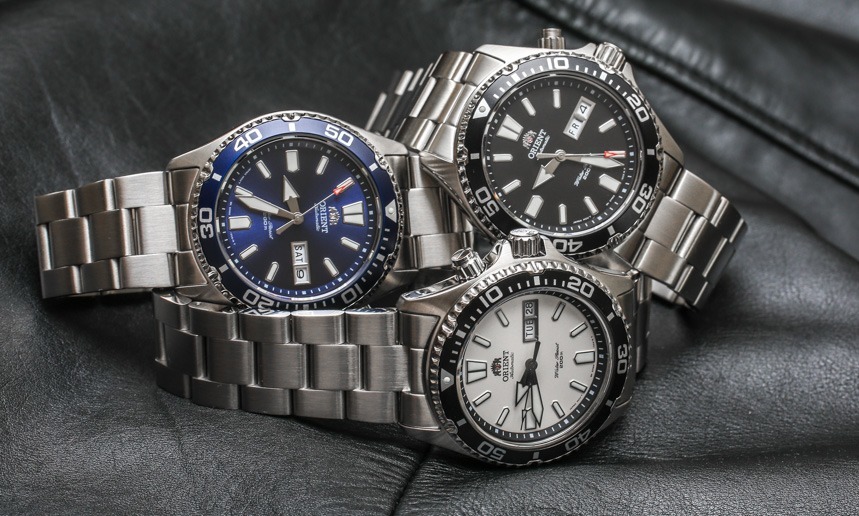 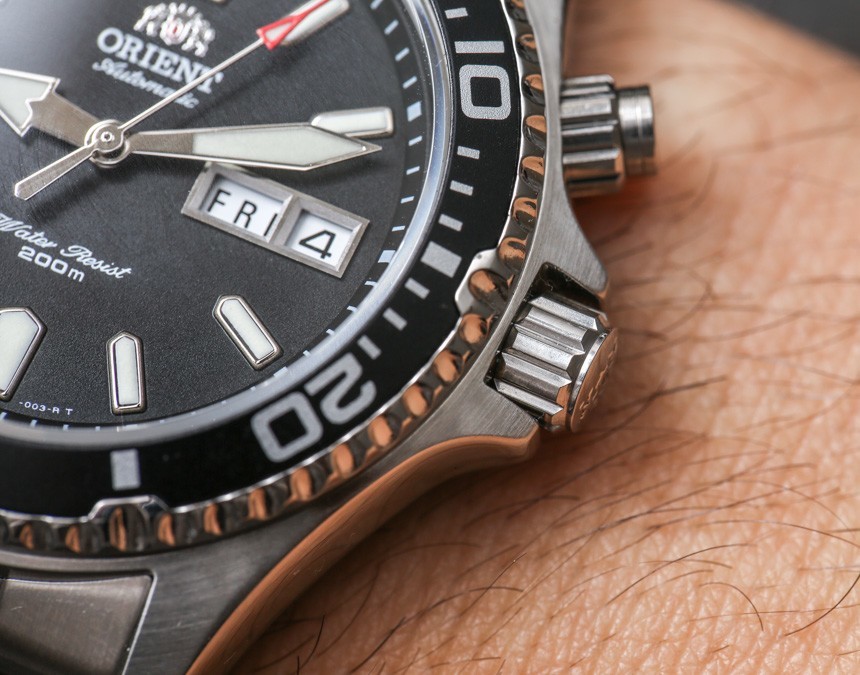 The 46943 movement has about 40 hours of power reserve and the extra pusher on the case is actually used to adjust the day of the week complication. Interestingly enough, even though the Mako USA is for the US market only, Orient decided to use their English/German day of the week disc so I suppose people who want a German language watch can also enjoy this timepiece. 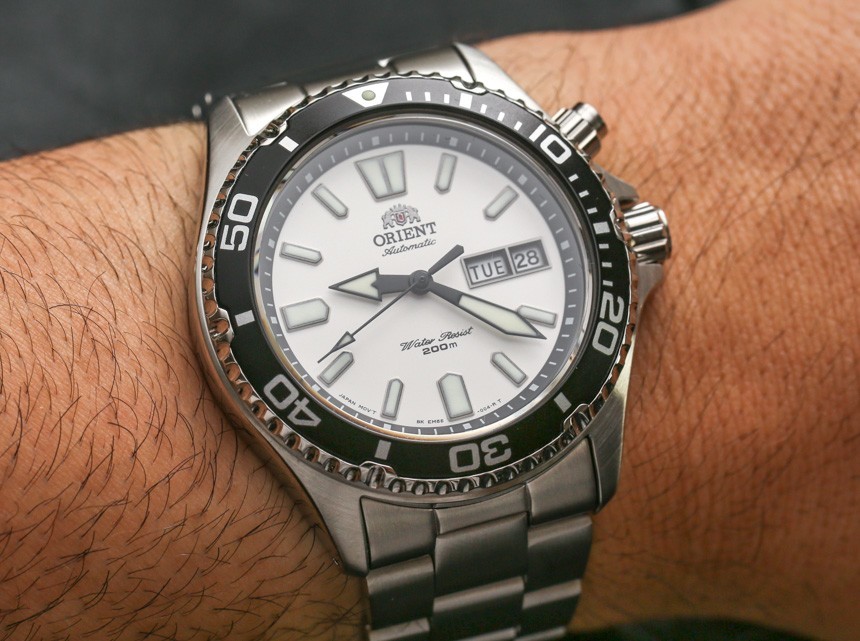 As a sporty dive watch, the Mako USA is decently capable and an easy choice for anyone who doesn’t want to spend many thousands or hundreds of dollars. Of course, the obvious competitors to the Orient Mako USA are mechanical dive watches from Seiko. There are going to be pluses and minuses to each watch, but in terms of offering a classic design at a really good price, the Orient Mako USA is still one of “the” budget dive watches to beat. The 200 meters of water resistance and fair 13mm of case thickness alone with the median size of the case diameter is intentionally designed to allow the Mako to be wearable for the largest number of people. 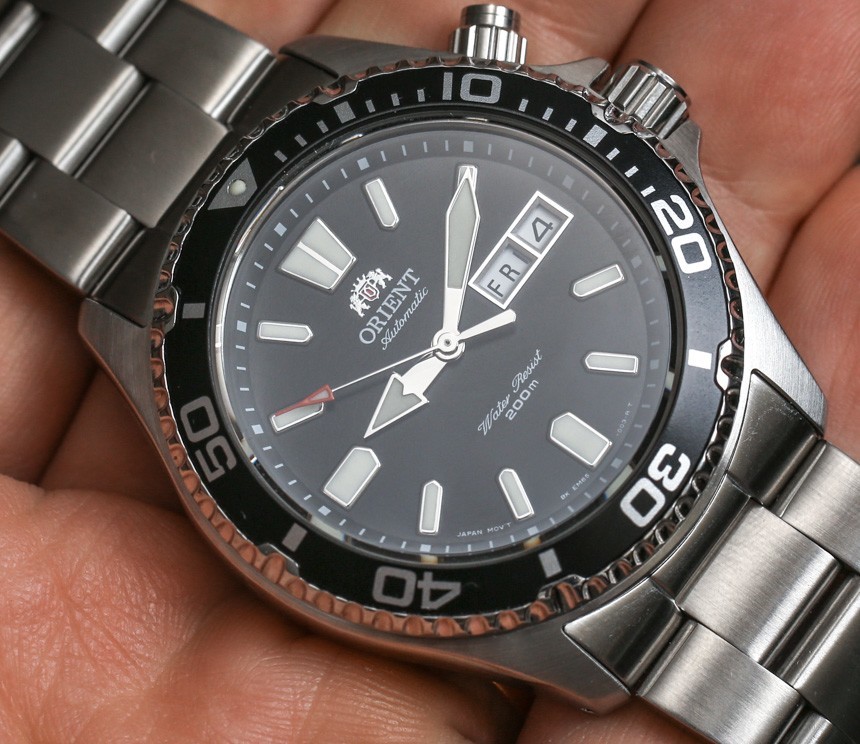 Of course, the Mako isn’t the only dive watch collection from Orient, even though it is their most popular model. I think it is safe to suggest most of their dive watches are a good value even though it is important for people to look at the features and materials that each use. We continue to feel that Japanese mechanical dive watches are still the best choices for anyone on a budget. You might recall another aBlogtoWatch article where we suggested that Orient dress watches are perhaps the best budget mechanical options out there. 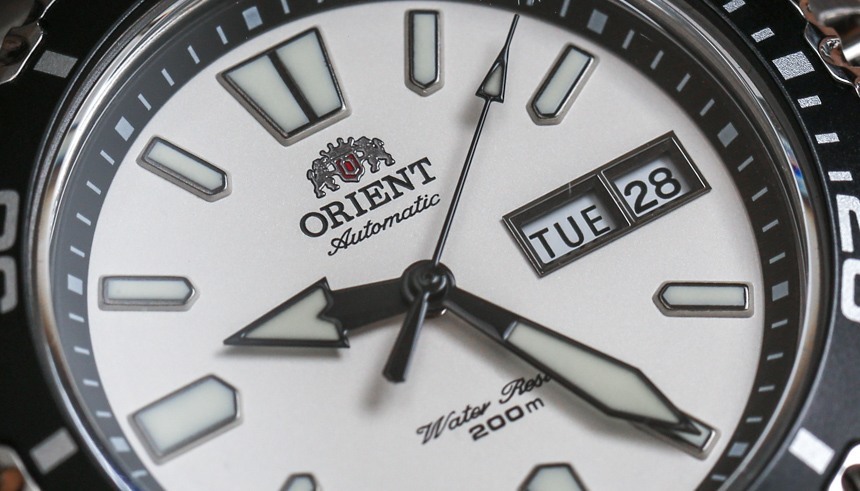 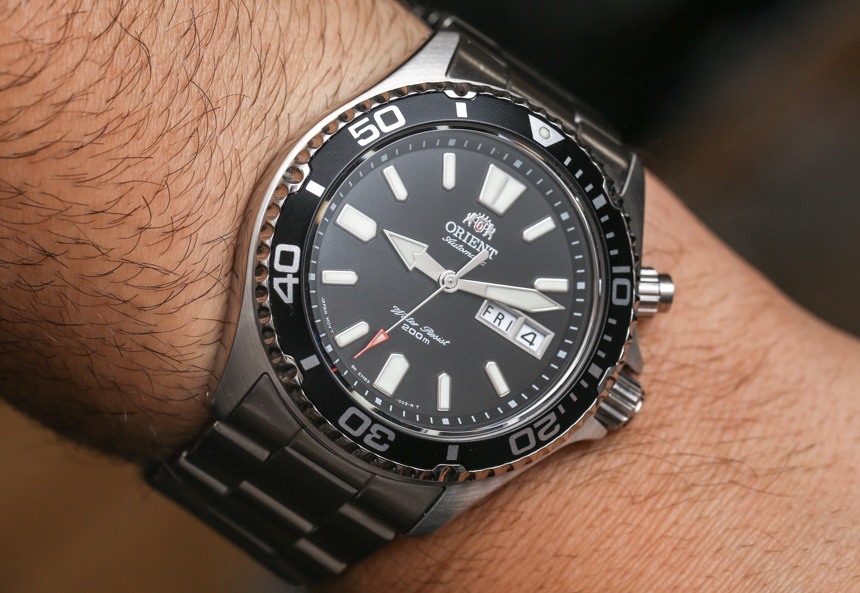 The particular dial color you most like of the Mako USA is a very personal choice. The black-dialed reference FEM6500FB9 is likely going to be the most popular option while the white dial with black bezel FEM6500GW9 is likely going to be the most interesting option. The blue dialed FEM6500HD9 uses an almost-black, deep-colored blue with a metallic finish to it. Blue dials always exists a nice option but for various reasons aren’t as popular as dials in black. 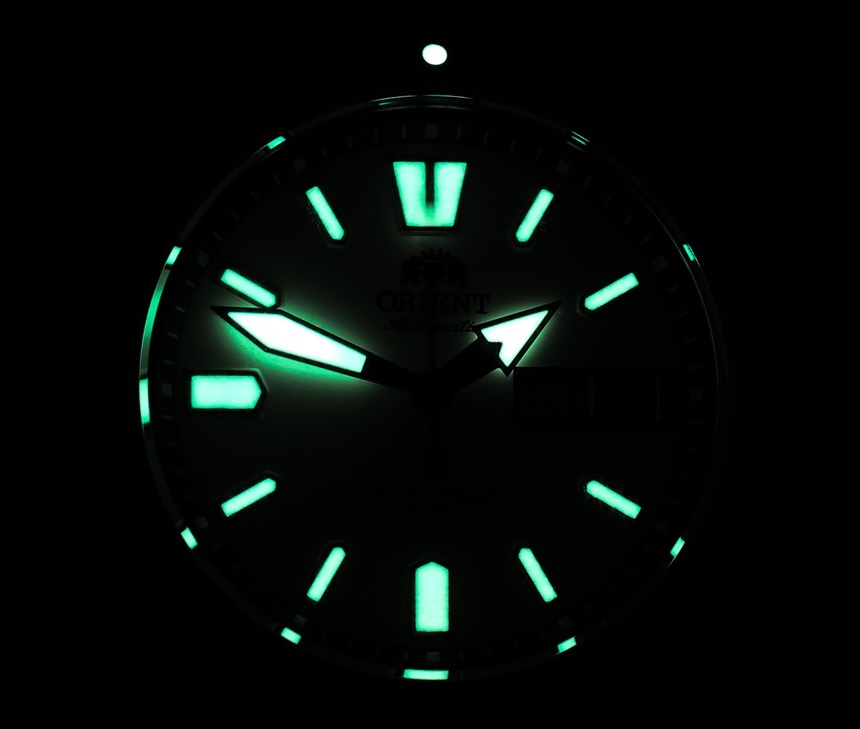 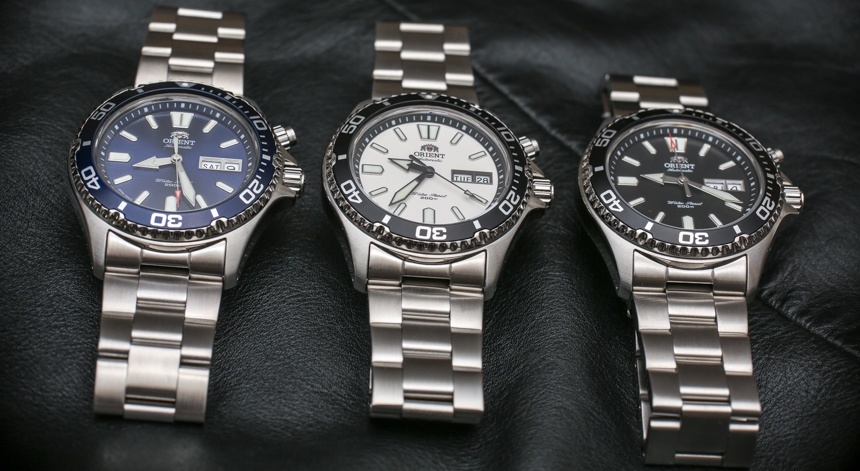 The Orient Mako doesn’t need a sexy story or fancy marketing to sell itself. Watch lovers tend to immediately recognize that the combination of features, price, and style make for a desirable watch for a good price. You probably aren’t going to abandon your Rolex or Omega dive watch for an Orient Mako, but you might prefer it as a solid weekend or beater watch for when your precious Swiss diver might be subject to unwanted abuse. 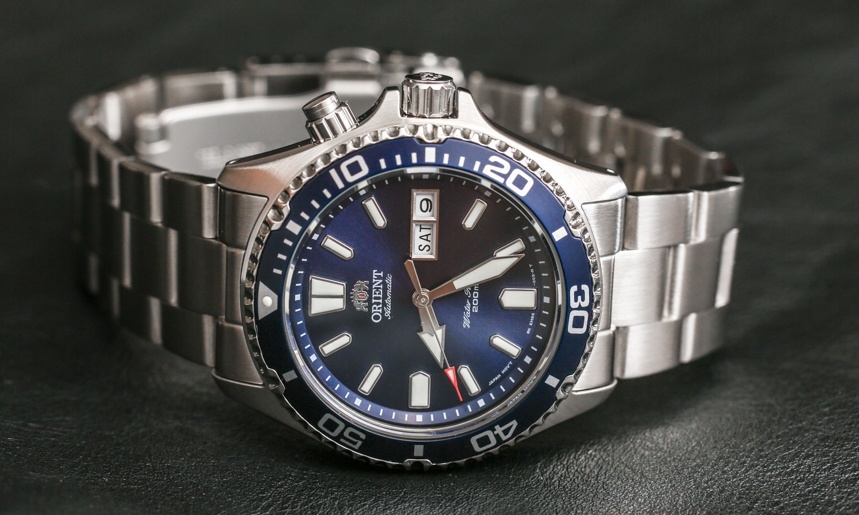 For some people, the Orient Mako USA will finally offer all the features they want for the price they can afford, and for others, the Mako USA will be an even more attractive sports watch destined for “abuse duty” given the really reasonable price. I’m personally really happy with how the Mako USA came out and I thank the determination of Orient’s US distributor for working hard to follow the desires of collectors in pushing to make this, and future watches like it, available for fans of the brand and of reasonably priced mechanical watches overall.

Price for the Orient Mako USA watch is $225. orientwatchusa.com

Necessary Data
>Brand: Orient
>Model: Mako USA references FEM6500FB9, FEM6500GW9, FEM6500HD9
>Price: $225
>Size: 41.5mm wide
>Would reviewer personally wear it: Yes
>Friend we’d recommend it to first: Anyone looking for a budget mechanical dive watch with a lot of good features.
>Best characteristic of watch: Solid upgrades over the original Mako with the same overall theme but a more enthusiast-oriented product.
>Worst characteristic of watch: Fans have been asking for an upgraded movement that includes hand-winding. Rumors say that Orient might consider something in the future but nothing yet.