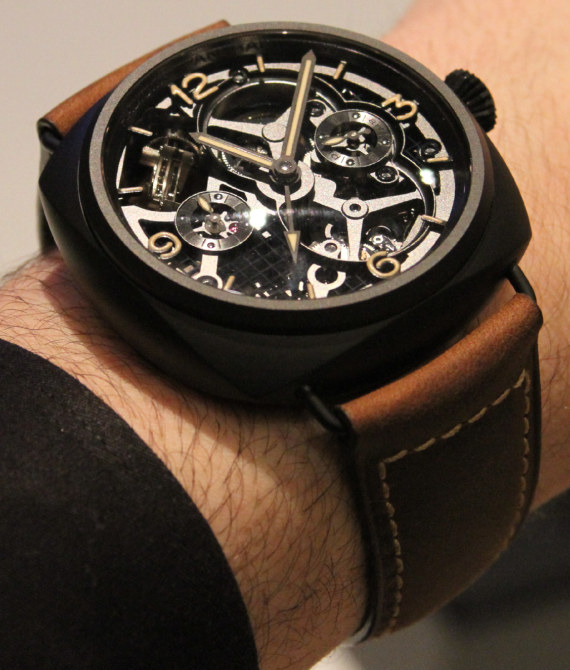 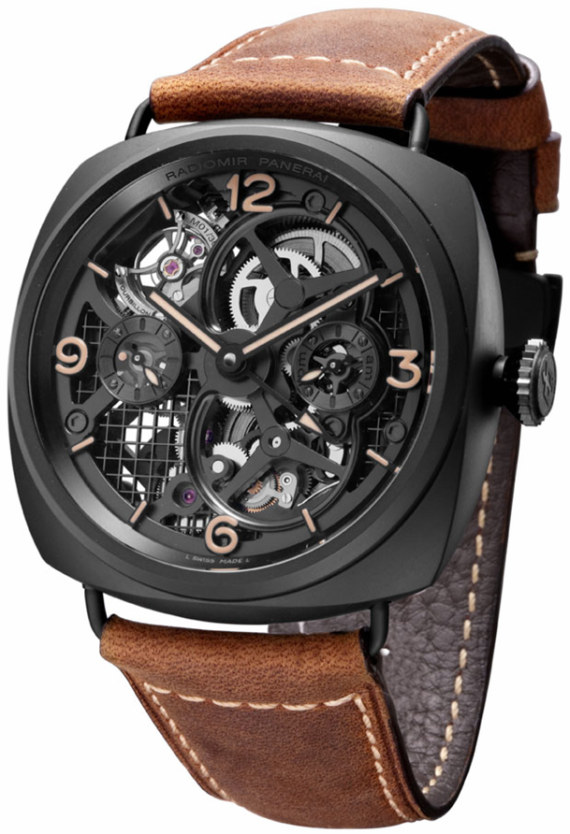 Easily my favorite new Panerai of SIHH 2010 is an unexpected model. The brand that made it a point to “hide” the tourbillon complication on their first tourbillon watch has now made an about face. This is the first skeletonized Panerai watch that I know of, and does not let down. It is actually the same movement from their normal tourbillon watch but skeletonized. This is in contrast to what some makers do by making a watch movement specially designed to be skeletonized. Good that the watch movement leneded itself nicel to the “open” treatment. The watch is really stunning and exactly what you would expect from a Panerai watch if it was skeletonized.  Called the Radiomir Tourbillon GMT Ceramica 48mm Lo Scientziato PAM348 (PAM 348), this piece is truly unique in the brand’s current watch line. Most of the other new models of 2010 are minor variations on existing models to differ broaden an established brand feel, but retain its strict identity.

The 48mm wide case is in a dark brownsih color matches to a vintage looking leather strap. The presentation of colors has a pleasant retro feel to it. As you can tell by the “Ceramica” name, the watch is not in metal but ceramic. Though it is a special type of ceramic that Panerai has developed. It is made from zirconium oxide which apparently is similar to or related to aluminum. The finish would be called satin or bead-blasted and the weight of the case is incredibly light. The rear of the case around the sapphire caseback window is in titanium. For a tall 48mm wide watch it sits pretty well. You have a classic turnip style Panerai crown in metal. The crystal of course is sapphire and the case is water resistant to 100 meters.

Unlike most skeletonized watches the dial is really easy to read. Panerai made sure that all the necessary markers are there and with bright lume applied to them. As such, there is no real part of the skeletonization that makes it difficult to read. You can tell from the images of the watch that I am wearing that it is a good looking timepiece with lots of utility. Note that is a pre-production model that I handled a lot so there are lots of finger smudges on the front and rear of the watch. 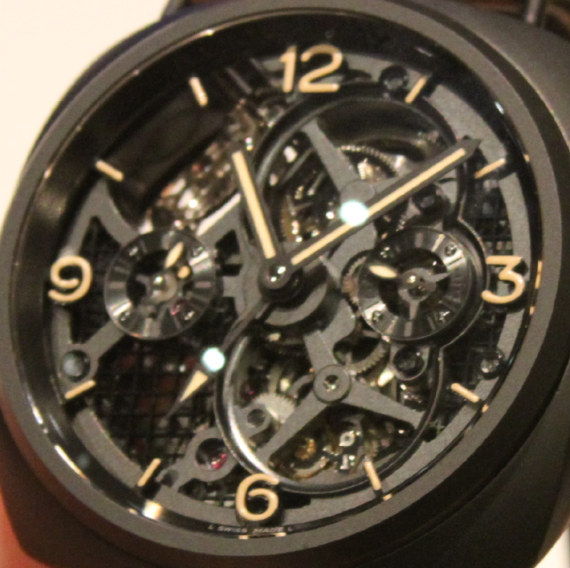 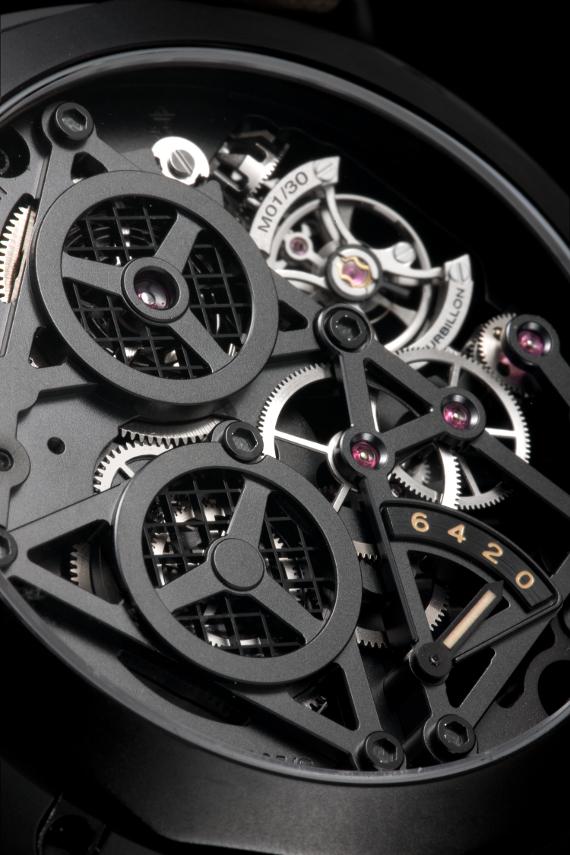 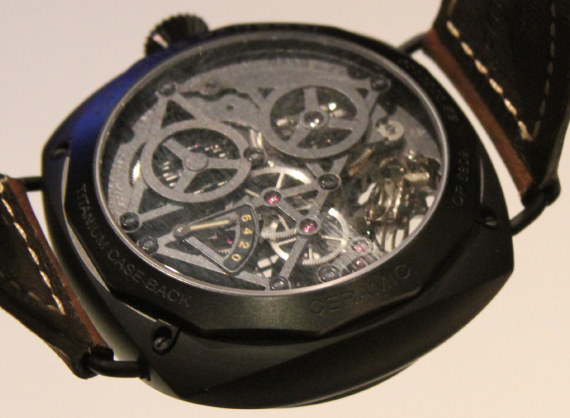 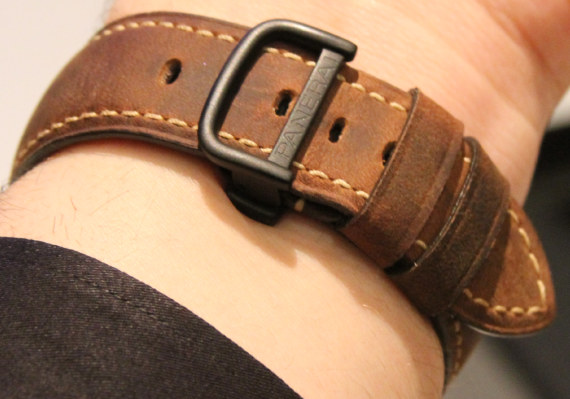 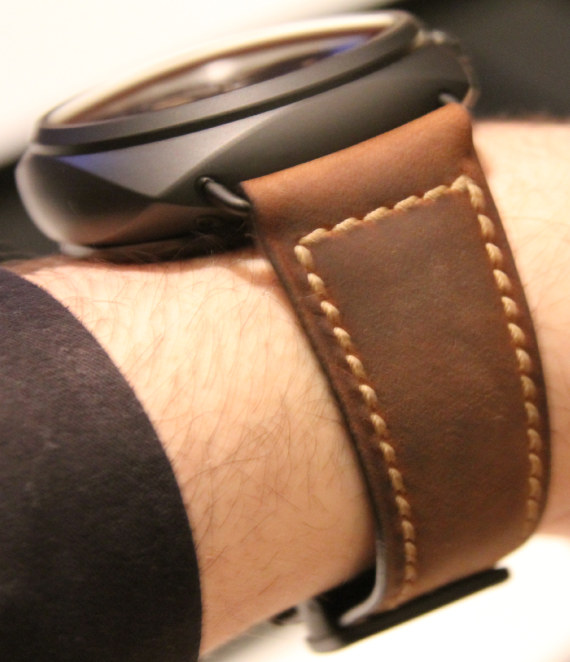 Panerai did an impressive job with their Ceramic compound, but an even more impressive job with their work on the dial making the PAM 348 a really cool looking timepiece. You might not know this, but Panerai has a special form of single axis tourbillon that spins on a diagonal axis each 30 seconds that makes it much more fun to watch. Inside the watch is the in-house made Panerai P.2005/S movement. It is manually wound with a 6 day power reserve (power reserve indicator is located on the rear of the watch). Let’s talk functions now. Of course there is the time, but there are also two subsidiary dials (again the power reserve indicator on the back of the watch as well). The main hands are also accompanied by the GMT hand. It is easy to read, but I would have liked Panerai to include a dedicated scale for the GMT hours around the bezel or flange of the watch. The left subsidiary dial is for the small seconds and well as a little dot that moves around the dial each 30 seconds – this indicates the movement of the tourbillon. The right subsidiary dial is an AM/PM indicator, which is essentially a synchronized 24 hour hand for the main time. All useful functions, with the neat little tourbillon dot thrown in the mix. By the way, that dot was originally added because the original watch with the caliber P.2005 movement did not have an exposed tourbillon on the dial so Panerai wanted to remind you that it was there.

The Panerai Radiomir Tourbillon GMT Ceramica 48mm Lo Scientziato watch is gonna be an expensive watch and part of a limited edition of just 30 pieces. No doubt that with Panerai’s popularity around the world, it will easy sell each of those quickly. I expect more skeletonized watches from the brand in time, but likely all limited editions and it is not inherently part of the brand’s personality. Price if I recall correctly was about 109,000 euros.