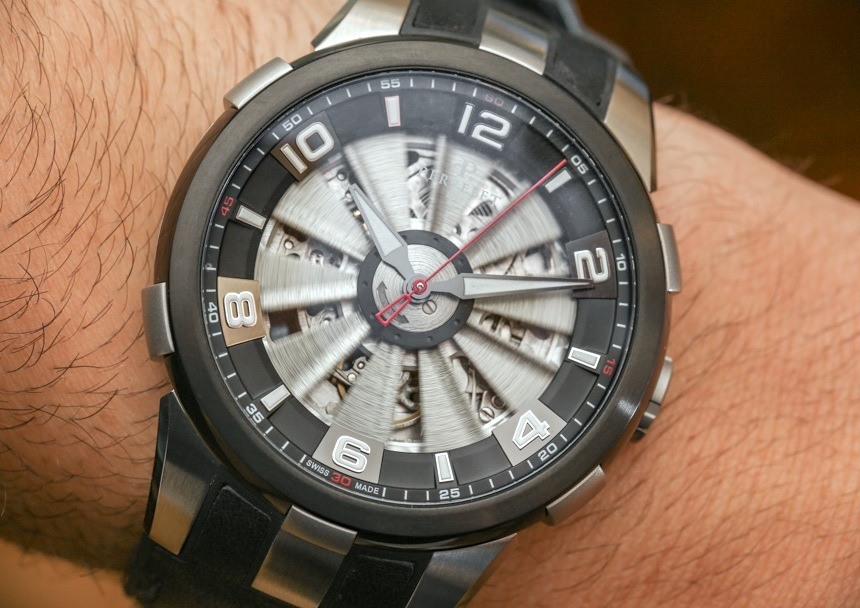 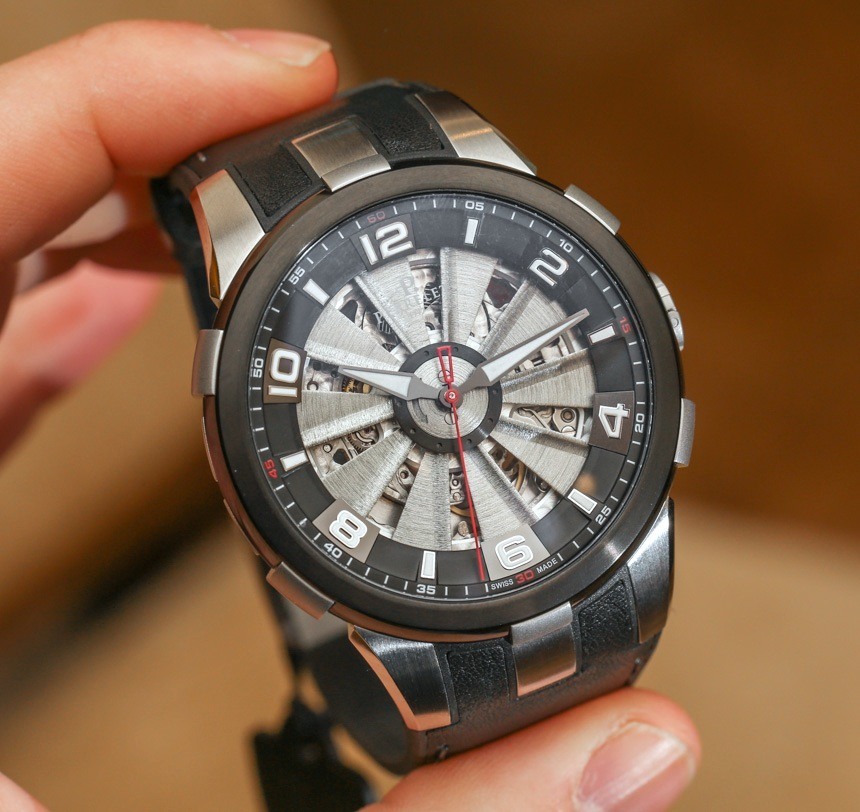 When the Perrelet Turbine watch collection first came out more than 6 years ago, it was a hit. While there have been new models out each year, one of the most interesting new ones is this Perrelet Turbine Skeleton (originally debuted on aBlogotWatch here). The novel spinning dial themed on jet engine turbines and Perrelet’s own “double automatic rotor” movements hit a sweet spot with collectors looking for novel sport-style watches. I also believe credit is due to Perrelet for helping to develop a new era of watch dial elements which literally move, but don’t have a true practical function. Here, movement is an artistic and emotional element as opposed to something actually being indicated or a view to a part of the movement. 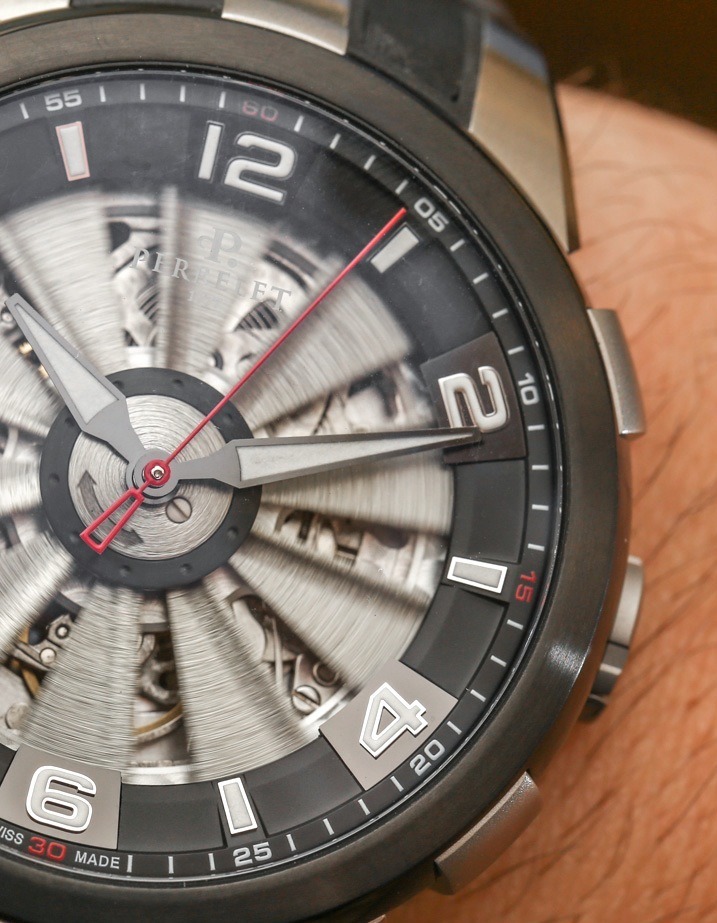 Originally, Perrelet’s double automatic rotor watches worked with a rotor on the dial of the watch as well as on the bottom of the movement (as is the case with most automatic movements). The idea was not only to reference that Perrelet was arguably the inventor of the automatic watch (sources somewhat differ on this point), but also to increase winding efficiency. The double automatic rotor concept birthed the Perrelet Turbine which was designed by Sebastien Perret (originally, at least) for the Perrelet brand. 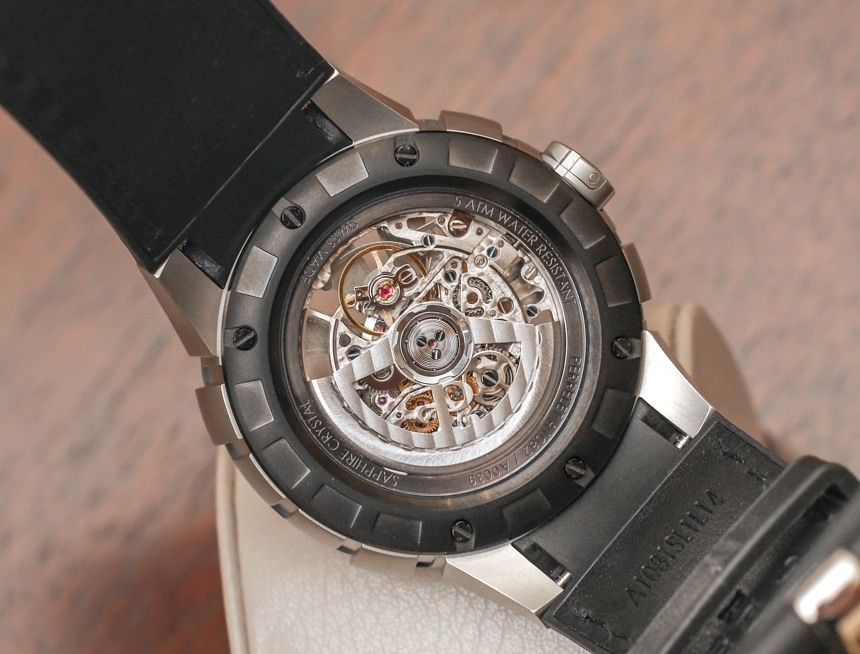 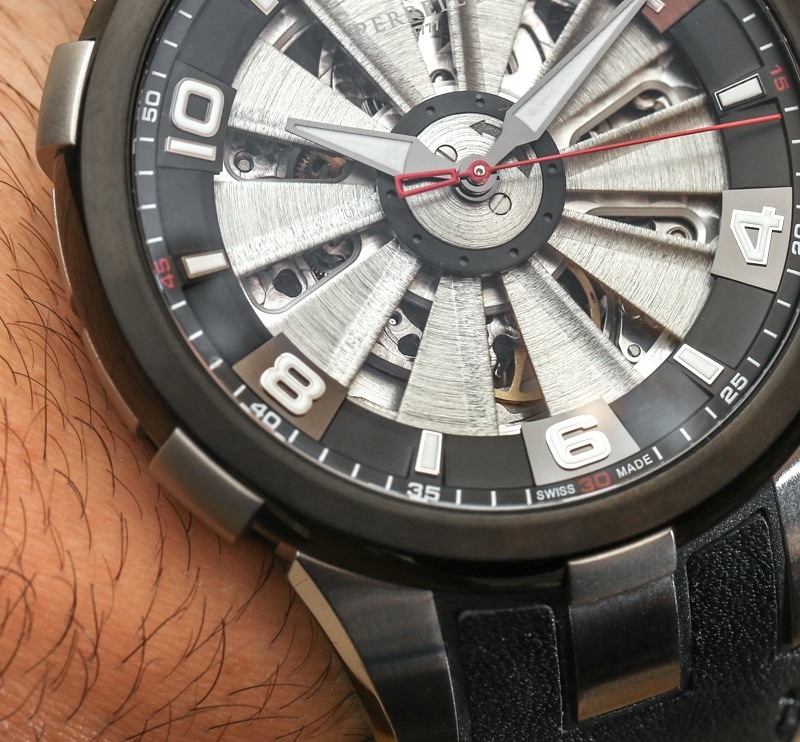 Perrelet did what most companies with a hit product do, and that is simply produce a series of versions and limited edition models around the same theme. Perrelet sort of overdid it with Turbine models, and that combined with a poor economy took out a lot of the brand’s momentum. What is odd is that despite Perrelet’s decent backing from the Festina Group, they are very quiet from a marketing perspective. Why is that important? Well, money into marketing is a very important element of making any luxury brand successful today. It just isn’t enough to have watches in stores anymore. 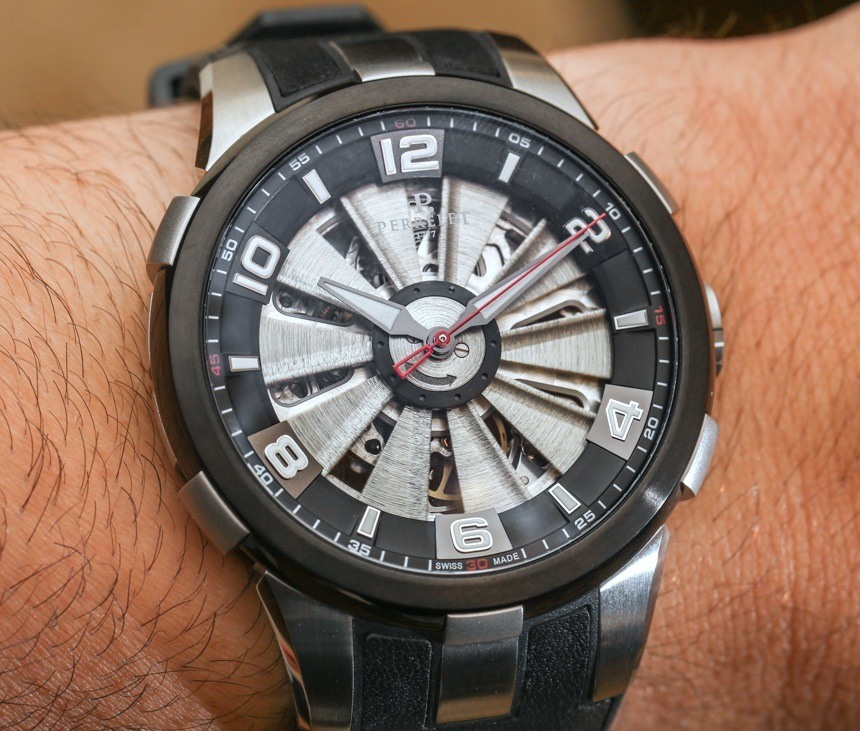 I wrote more about the history of the Perrelet Turbine in the article I linked to above, so let’s get on with this hands-on experience with the Perrelet Turbine Skeleton model. There are actually six versions of it, and this particular model in steel with the leather strap is known as the reference A1081/1A. The case is 44m wide, which makes it a sort of mid-range sized Perrelet Turbine model. You have many of the traditional elements such as the PVD black-coated bezel and little “claws” on the bezel as well. 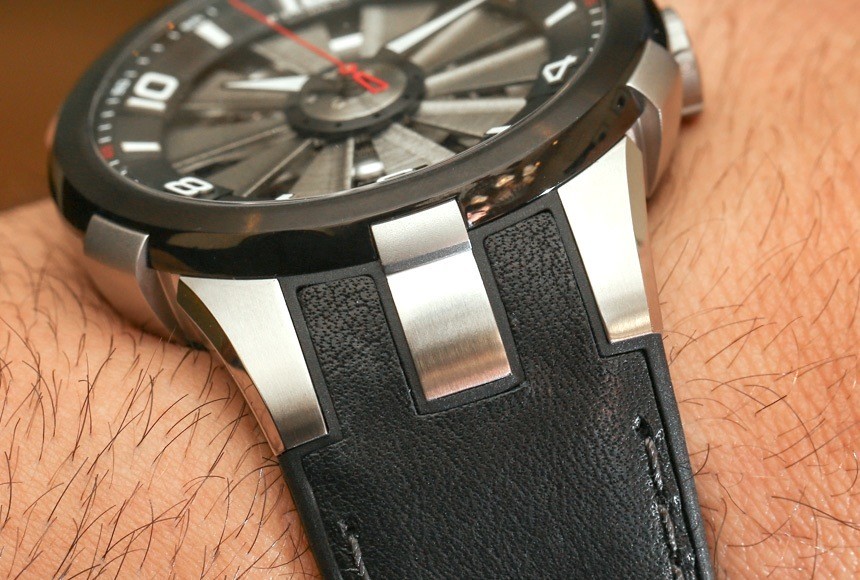 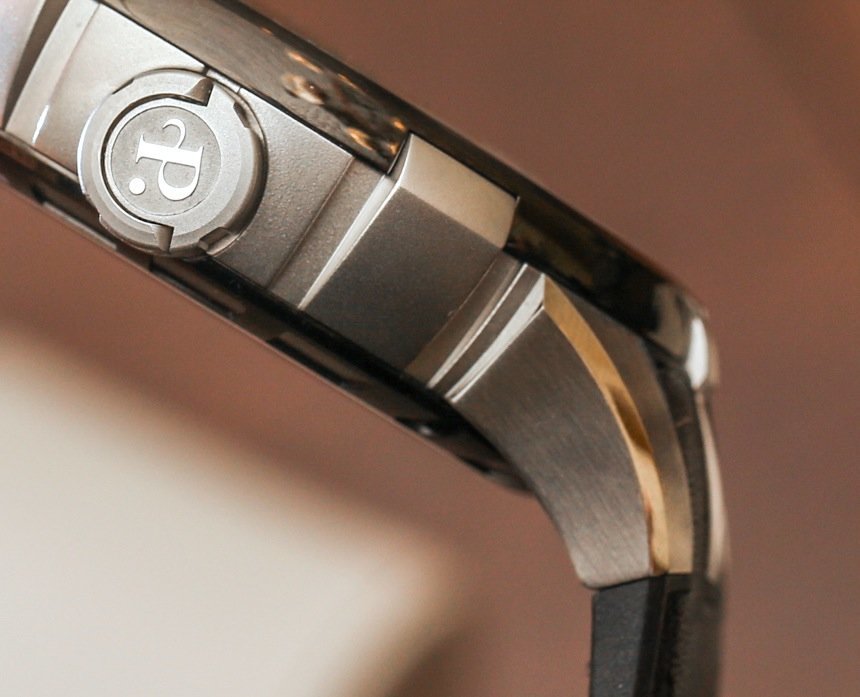 The case also has a sort of hidden crown at 3 o’clock. It isn’t so much hidden, actually, as inset into the side of the case. The crown has a small fold-out handle which you can use to manually wind the watch as well as pull out the crown to adjust the time. The smooth, graceful lines of the Perrelet Turbine case have always been nice, and I feel that this timepiece collection still represents an appealing and distinctive look. 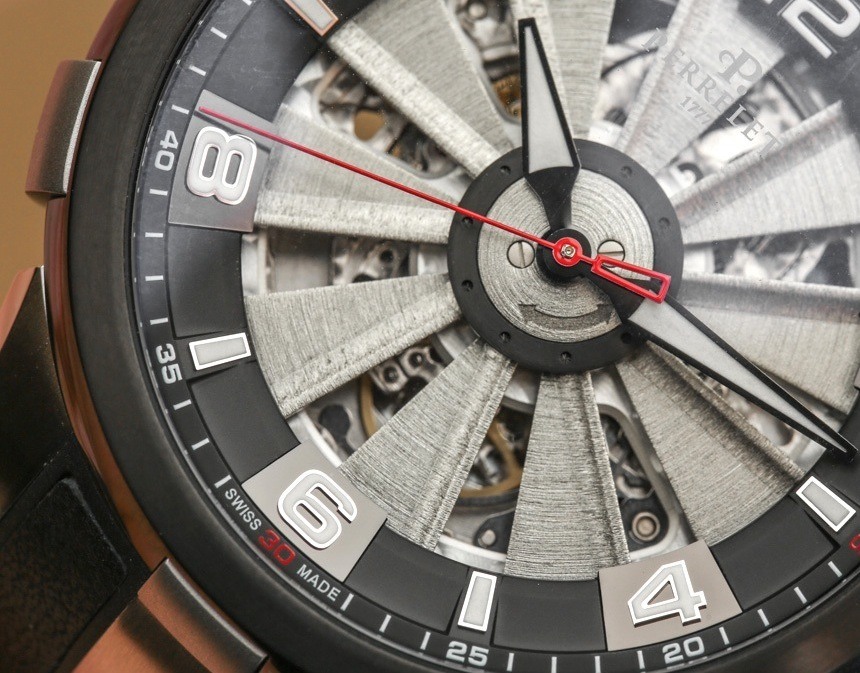 Of course, the main attraction is the dial, and what is special about the Perrelet Turbine Skeleton is the “skeleton” part. Essentially, the dial has been removed (well at least the part right over the movement) and the mechanism can been seen through the spinning turbine blades. When spinning quickly, the visual effect is to see the movement easily, and when moving more slowly, the wearer can see a hint of the movement operating between the other elements of the dial. Yes, the Perrelet Turbine Skeleton concept is simple, but it is actually rather satisfying as well. 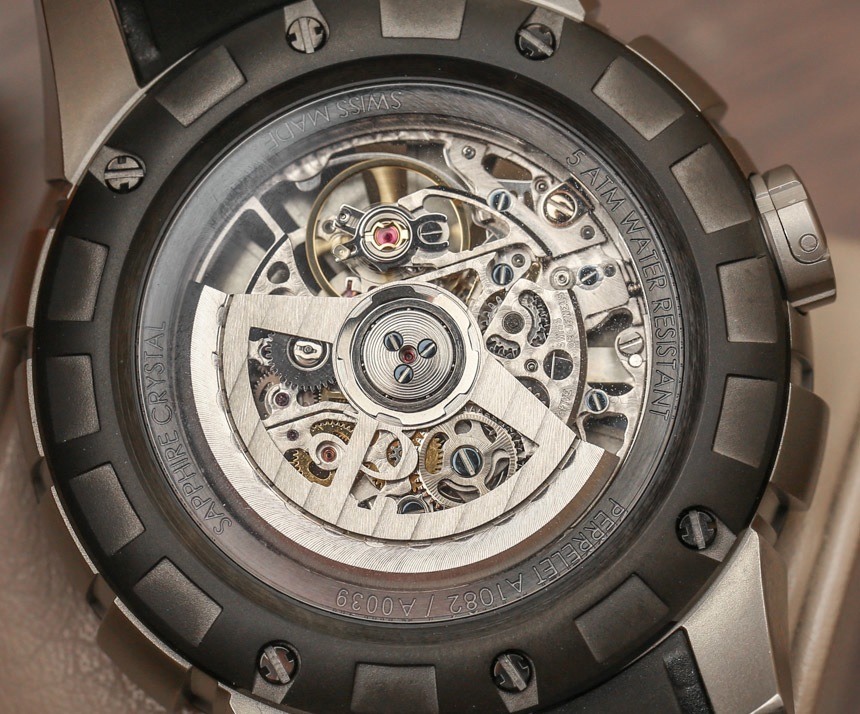 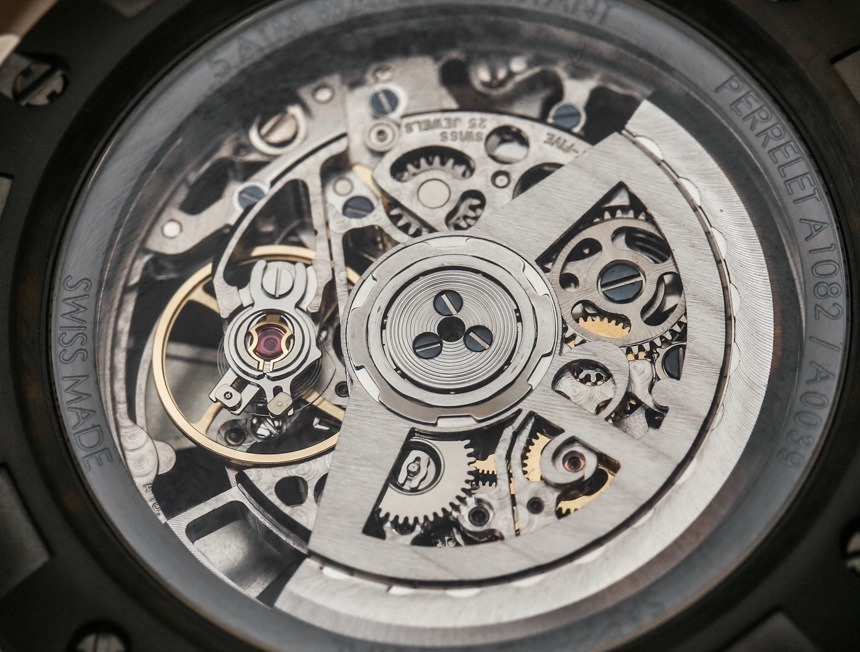 In addition to viewing the Perrelet caliber P-381 automatic movement through the spinning blades, you might notice that the movement is fact skeletonized. It may not have the precious decoration of a much higher-end movement (I believe the P-381 is still based on the Soprod A-10), but it does look rather cool and the effect is there. The good news is that while this is totally a luxury watch, the price is on the lower end of what you might guess given similar “novelty” sport watches out there. With that said, I always tend to feel that with brands like Perrelet, shaving even more off the price is an excellent way to galvanize consumers – which is something these brands need a lot of today. 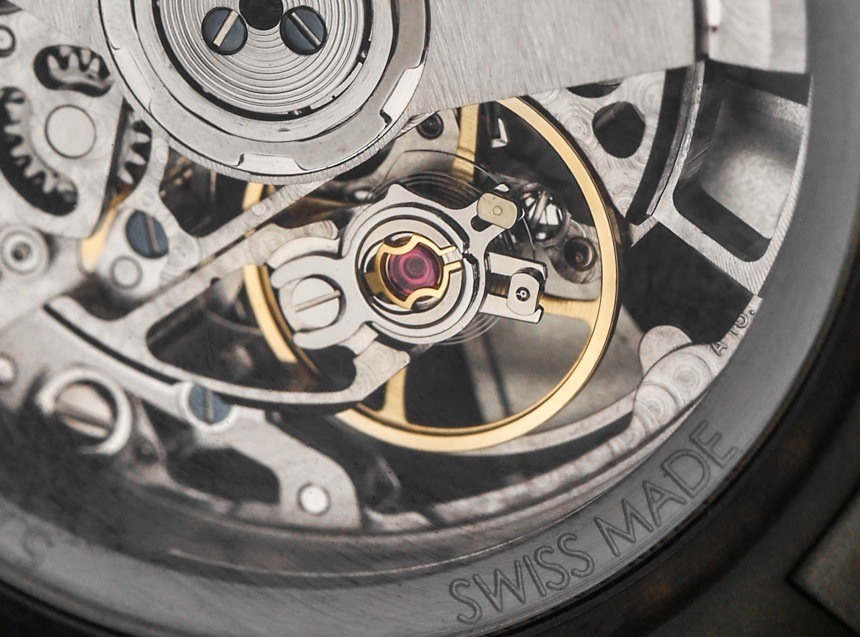 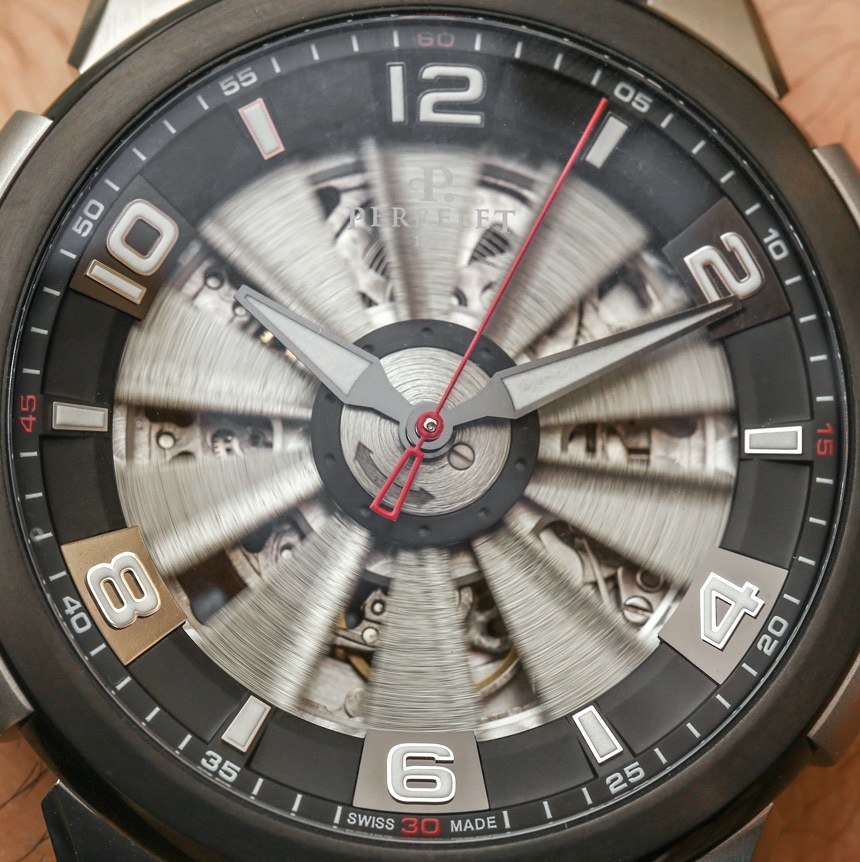 Despite the playful and busy nature of the Perrelet Turbine Skeleton dial, Perrelet continues to ensure that legibility is something high on their priority list. The hands have wide sections of luminant and the hour markers are incredibly bold given the overall theme of the dial. As you can see, the hour markers and hands exist on a plane over the spinning turbine blades, which is why legibility is so well maintained. 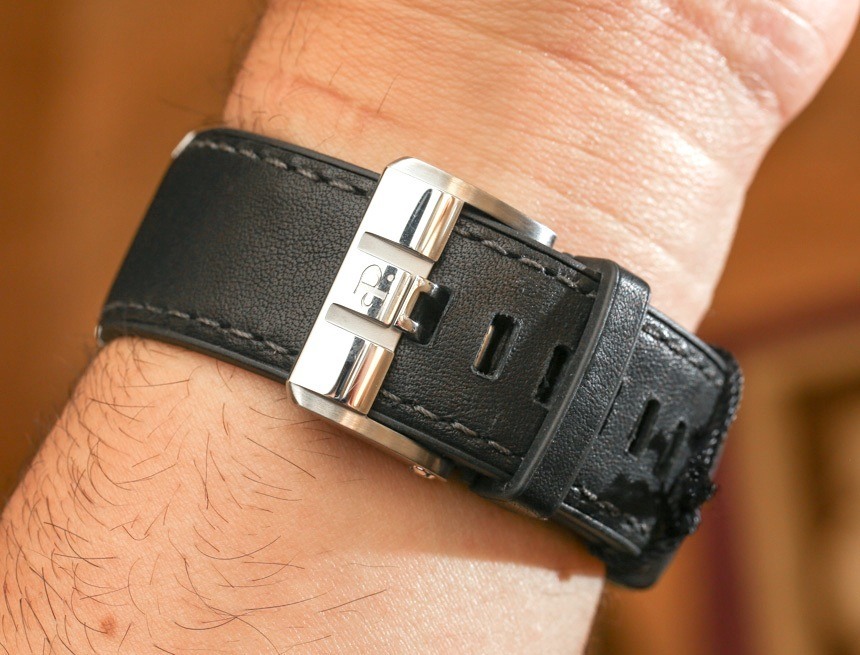