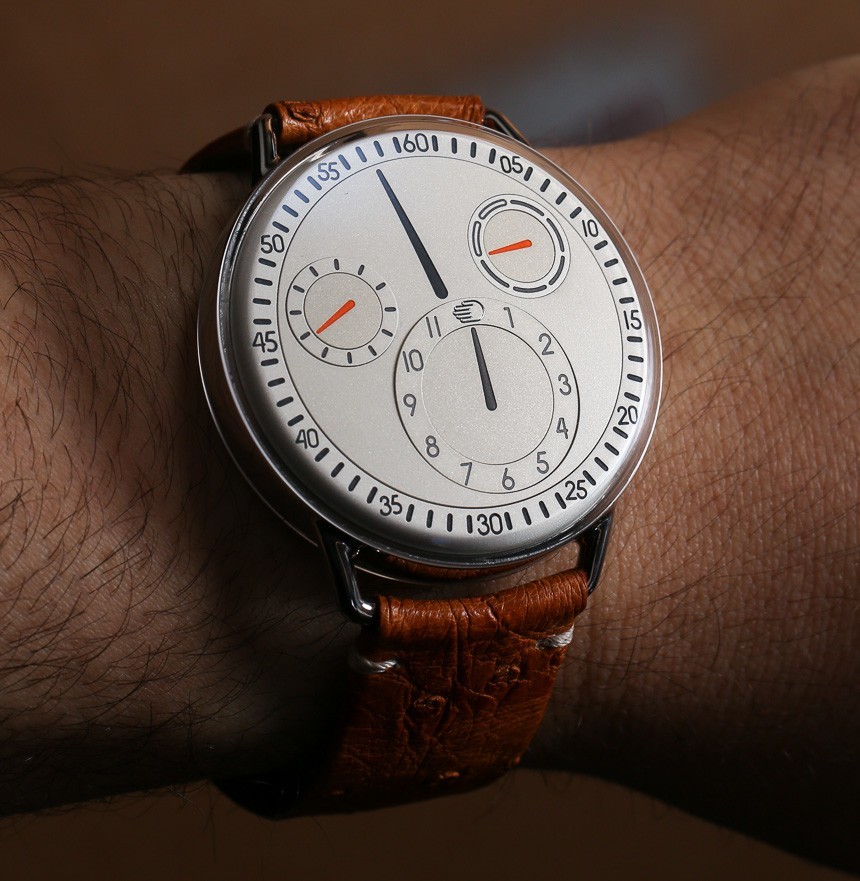 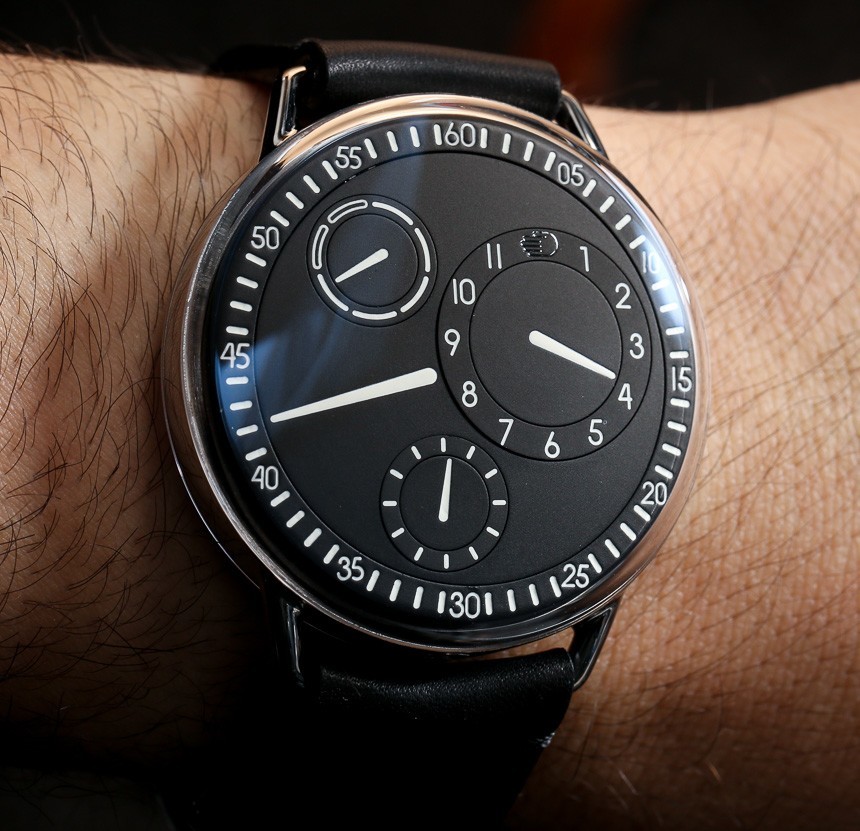 The aBlogtoWatch team meets up with Benoit Minitens, founder of Ressence watches, at the end of a particularly busy day at Baselworld 2014. Benoit is among the last people other than the janitors still at “the Palace” tent. He isn’t schmoozing with far east clients trying to land a big account, nor is he toasting members of his team to another job well done. Benoit is at his humble yet cleverly designed booth showing us his new Ressence Type 1 (Type One) watches long after most people would.

Benoit actually built a safe-like system into his booth, and shows us as the middle of the table folds out to reveal watches. We listen carefully as he explains what has been going on over the last year while vacuum cleaners operate in the background. Benoit, a native of Belgium who lives in Antwerp, explains to us the complexities of building a watch brand that uses very few of the parts that other watches do. Apparently, his novel timepiece ideas are a headache, but that hasn’t stopped him from venturing forth on his life mission and into his third major collection that is confusingly named the Type 1. 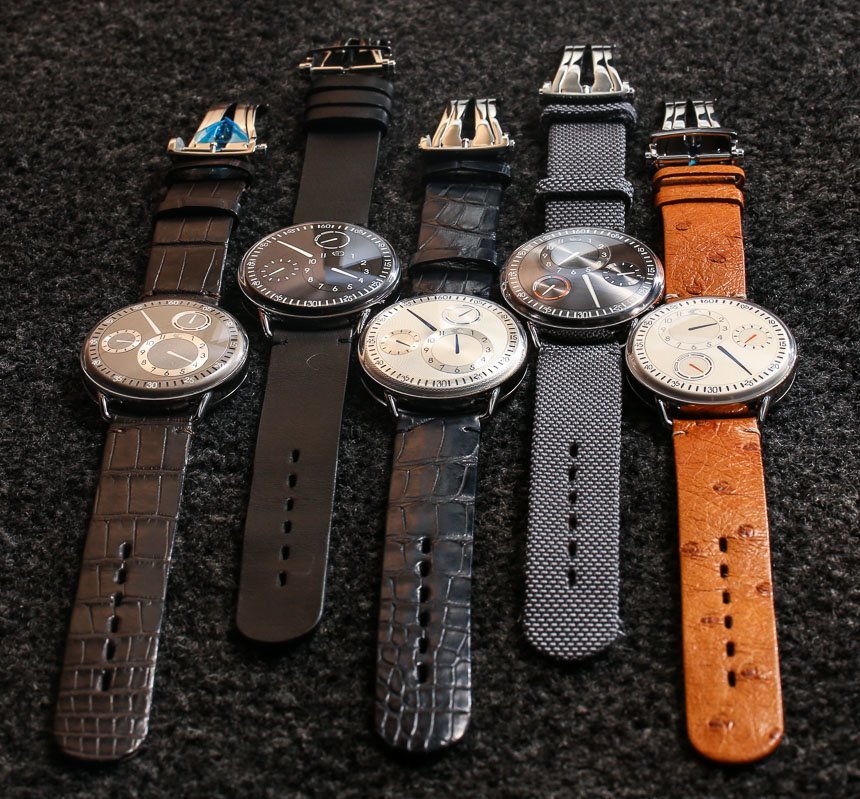 Ressence’s other major model right now is the Type 3. His first major watch, (which we just called the Ressence watch), was a success but is no longer produced, as he finished the run. Looking back on things, Benoit admits that he may have entered the “limited edition” thing a bit hastily, but like a good student, he has become keen to learn from the watch industry.

The Type 3 is currently the brand’s flagship model with a liquid-filled case and a bit more complexity compared to the Type 1.  aBlogtoWatch went hands-on with the Ressence Type 3 watch here. At a glance, it would be simple to confuse the Type 3 with the Type 1, but there are a lot of differences between the two. The Type 1 is a bit more simple, doesn’t have a date indicator disc, and isn’t filled with liquid. It does, however, carry over the slick-styled case that is sandwiched in sapphire crystal and it lacks a traditional crown. 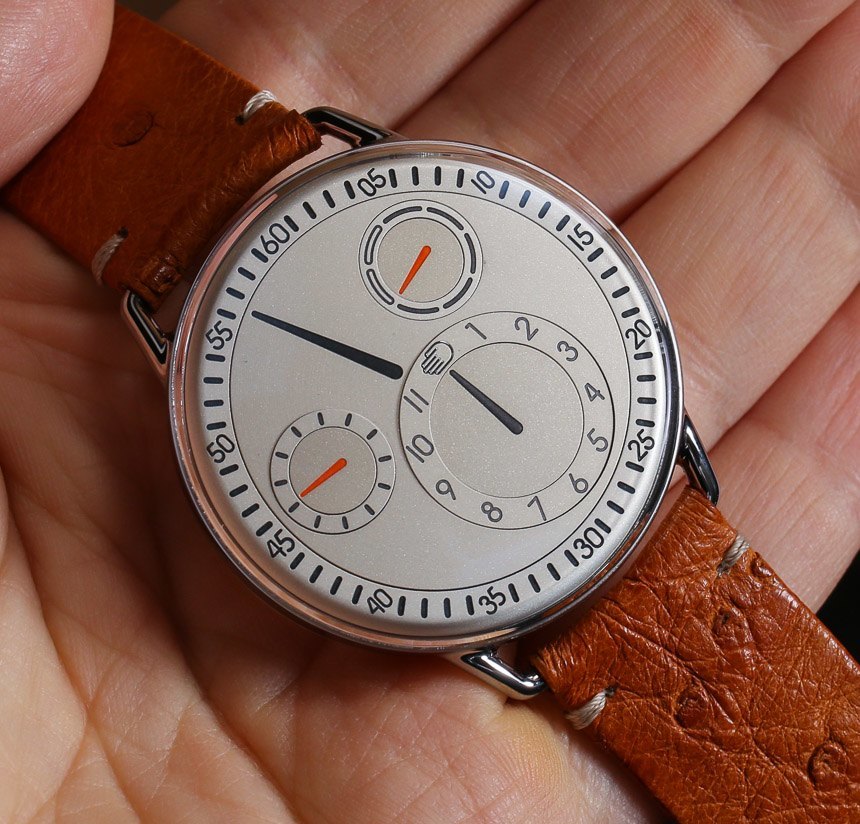 On the wrist, the Type 1 is difficult to not love. It has such a modern, elegant feel to it we almost want to make a poster about modern watchmaking and feature Ressence’s work as the centerpiece. Ressence didn’t invent a new movement or complication, but rather a new concept for displaying the time as well as for how a watch case can look. Not only is the Type 1 watch and Ressence overall a futuristic brand, but it envisions a Utopian future where things are beautiful, simple, and compelling. It is a refreshing outlook when today’s futurism is so often an interpretation of an apocalypse.

At 42mm wide and 13mm thick, the five initial versions of the Ressence Type 1 each have a titanium case. Well the middle section and lugs are titanium, and technically speaking most of the visible case is actually two domed pieces of sapphire crystal. The lugs are quite nice, being “loop style,” but not leaving a huge gap between the strap and the case. Little things like that show a dedicated concern for details that anyone spending $20,000 on a watch should be receiving with their purchase. 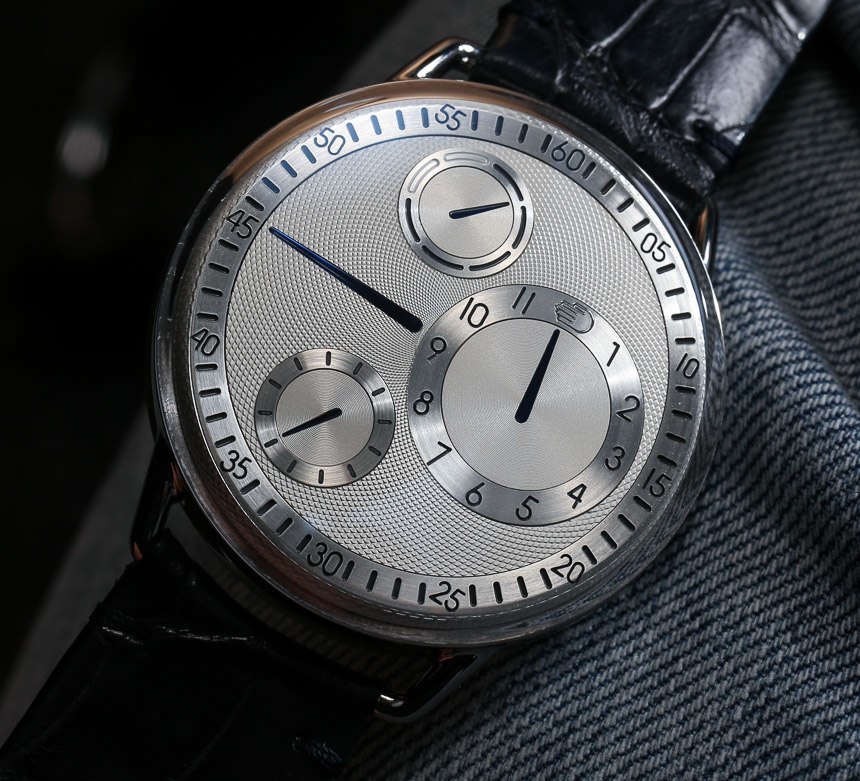 The “Ressence concept,” if you want to call it that, is about how the time is displayed. Benoit developed a cool system of non-overlapping discs that all move together. There is a subsidiary dial for the hours, one for the day of the week, one for the seconds, and the main hand is for the minutes. The effect of not having overlapping discs is that the dial looks flat and as though it is one with the crystal. Of course, it doesn’t quite have the amazing “flat” look of the Type 3 watch, which is filled with liquid, but it is pretty neat nonetheless.

aBlogtoWatch first discussed the Ressence Type 1 watch here where our David spend a healthy amount of time discussing the construction of the case and movement, as well as the collection overall. We were jazzed about the Type 1 then, and after getting some hands-on with it, we feel that it is a very solid “entry-level” Ressence. The problem, of course, is that in the world of exclusive limited production timepieces, entry level still often means out of reach for most consumers. 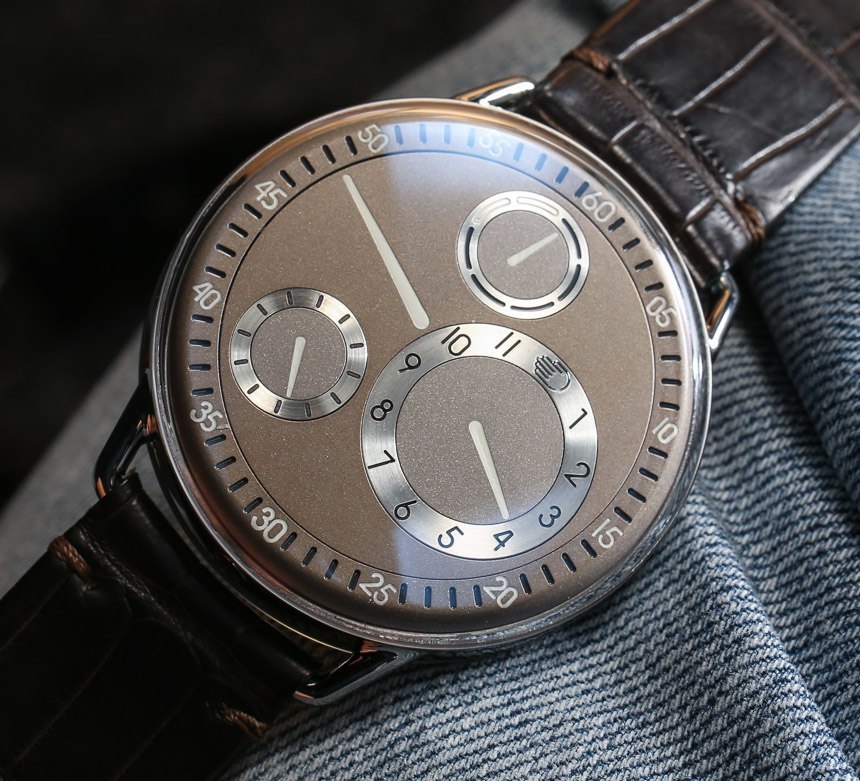 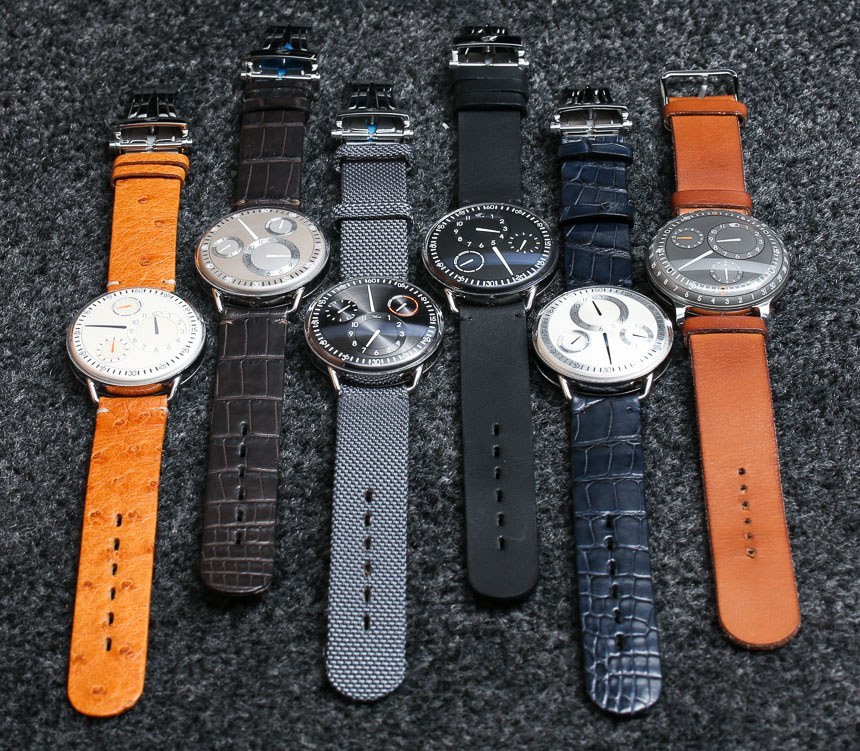 The sad thing about Ressence is that its appeal goes further than most people’s budgets. It doesn’t tout itself as a luxury product, but rather a well-made item for design loving engineers. It really does focus on function and form equally, and that is very rare to say about a watch, especially one from someone who entered the industry with such a big punch and who just keeps on refining his own ideas in a totally unpretentious way.

The core of the Ressence Type 1 is a base Swiss mechanical automatic movement that you can imagine is heavily modified by Ressence in-house. Benoit laments the difficulty in getting properly made parts and says that most of the money Ressence makes goes right back into the brand. His goal, of course, is to purchase the machinery necessary to produce pieces in-house. It is an important lessons for ambitious young watch making entrepreneurs – that production and supply are often much more deviously overwhelming than design and distribution. 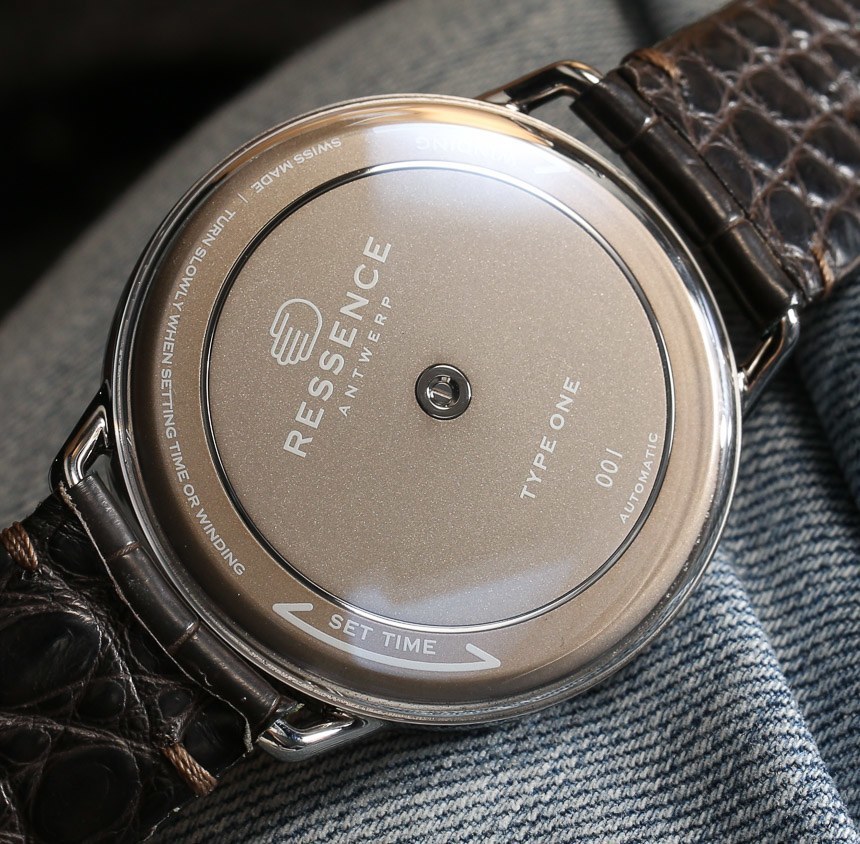