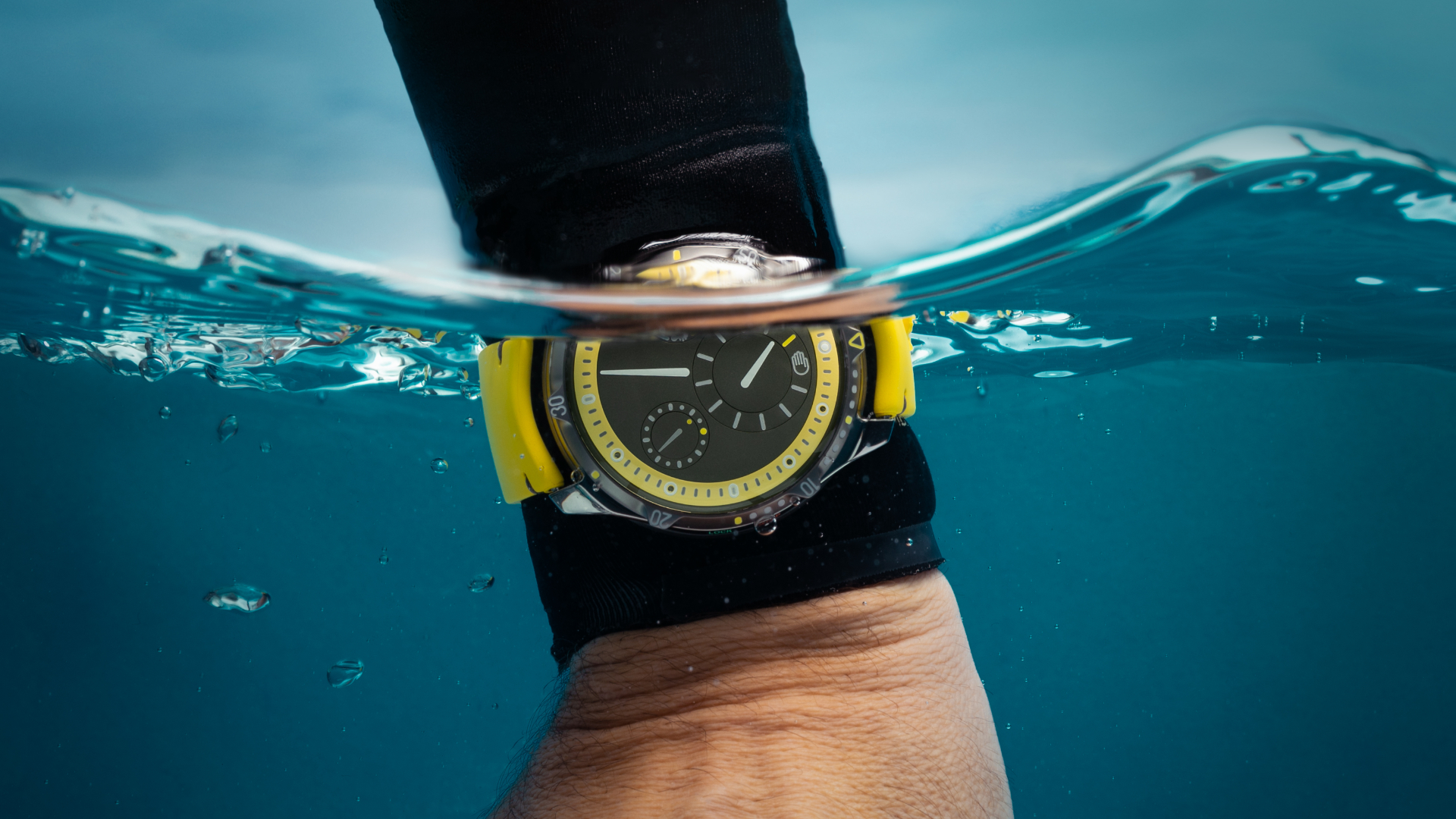 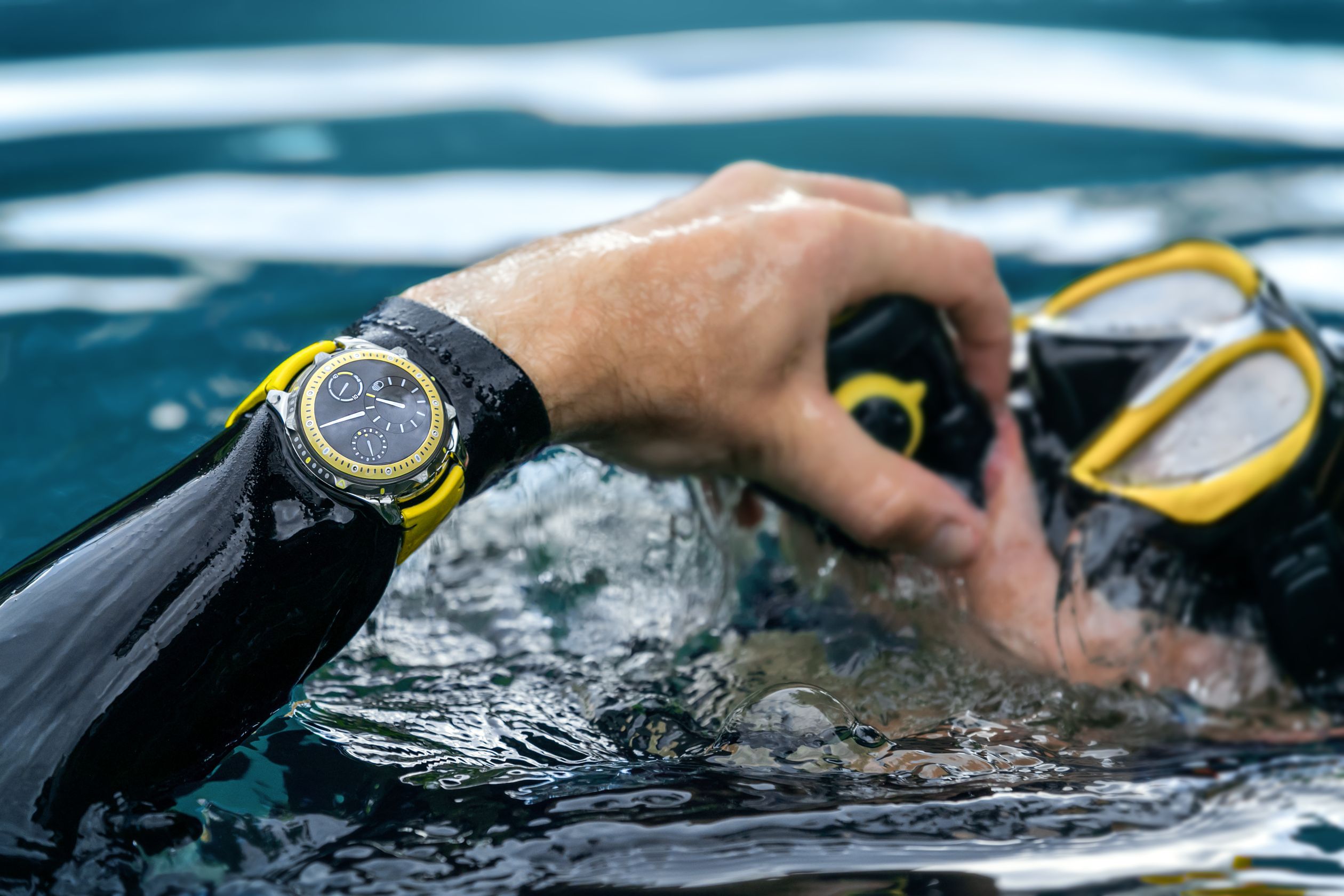 Dive watches have become increasingly more capable over the years, but the core concept behind them has remained largely unchanged for more than half a century. Sure, materials have improved, movements have become more accurate, and depth ratings have reached near-ludicrous levels that no human being will ever be able to experience, but the idea of a three-handed movement inside a water-resistant case is one that has endured throughout the decades. Ressence is anything but your traditional watchmaking company, and the brand’s Type 5 dive watch that first made an appearance in 2015 features a unique oil-filled display to ensure complete legibility at any angle while underwater. The brand’s latest release is a collaboration with Art In Time called the Ressence Type 5 AIT, which expands upon the existing Type 5 diver series in a limited-edition run of 12 pieces, with one of the examples set to be auctioned at a charity event in September with all proceeds benefiting the Foundation Prince Albert II de Monaco. 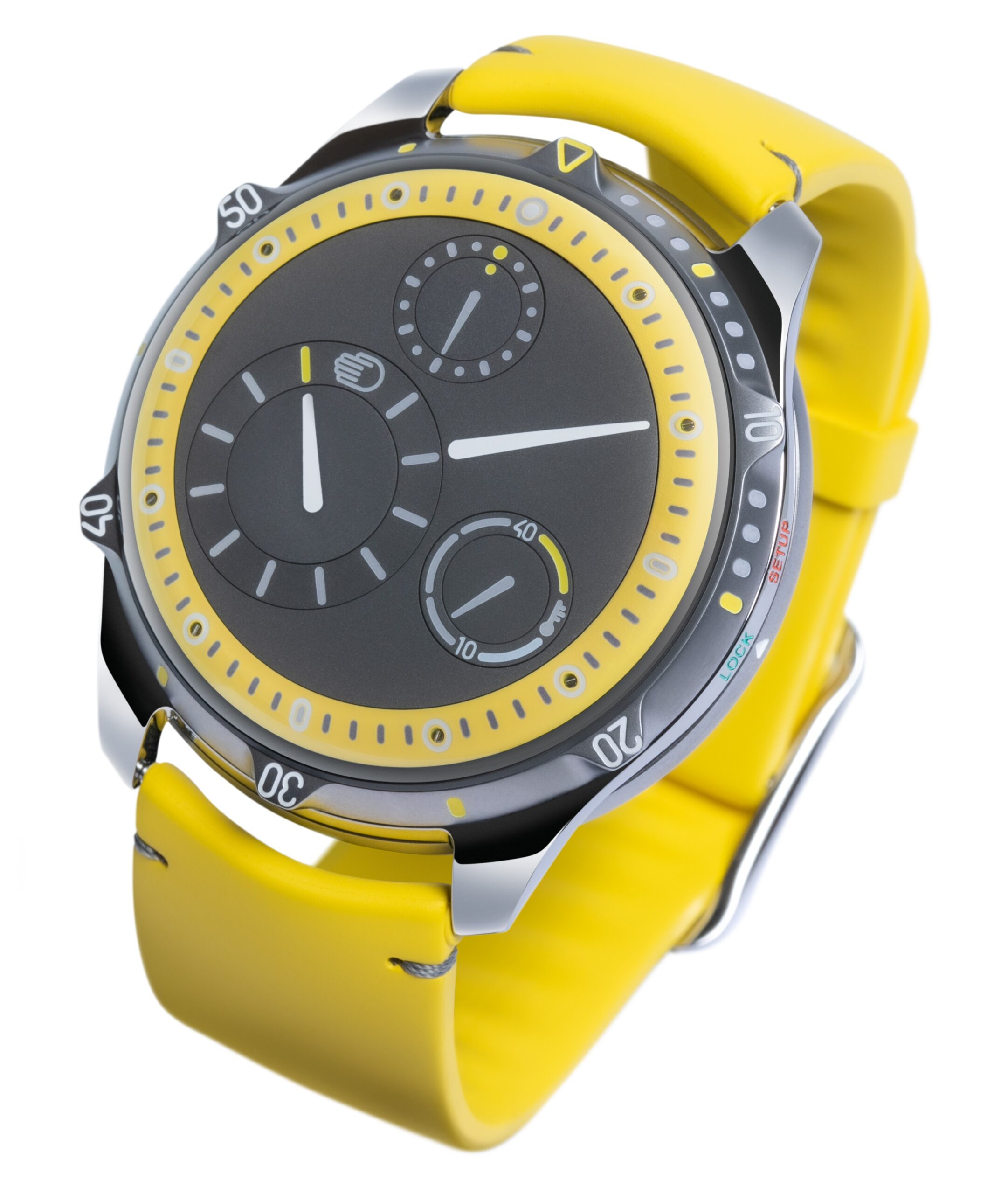 Like other models from the Type 5 range, the Ressence Type 5 AIT features a Grade 5 titanium case that measures 46mm wide and 15.5mm thick with its heavily domed, anti-reflective sapphire crystal. The unique case construction consists of two separate sealed chambers, with the upper one filled with 3.57ml of oil, while the lower dry chamber contains the Type 5 AIT’s automatic-winding mechanical movement. The movement is connected to the rotating discs that make up its display with a special magnetic transmission system, and winding and time-setting is carried out through the case-back rather than with a traditional crown in a unique setup that the brand calls RCLS (“Ressence Compression Lock System”).

Like the previous Type 5 dive watches, the new Ressence Type 5 AIT includes a unidirectional rotating timing bezel, although it has been given larger protruding tabs at the 10-minute markers for a more rugged design that is easier to grip. Despite its mechanical movement and oil-filled upper case, the Ressence Type 5 AIT remains incredibly lightweight at just 85 grams, including its strap. Additionally, although the Type 5 is an oil-filled dive watch, it does not offer one of the mind-boggling depth ratings often associated with the category, as it is only the upper part of the case that is filled with oil. Consequently, water resistance for the Ressence Type 5 AIT remains the same as previous Type 5 dive watches at a fairly standard but entirely functional 100 meters. 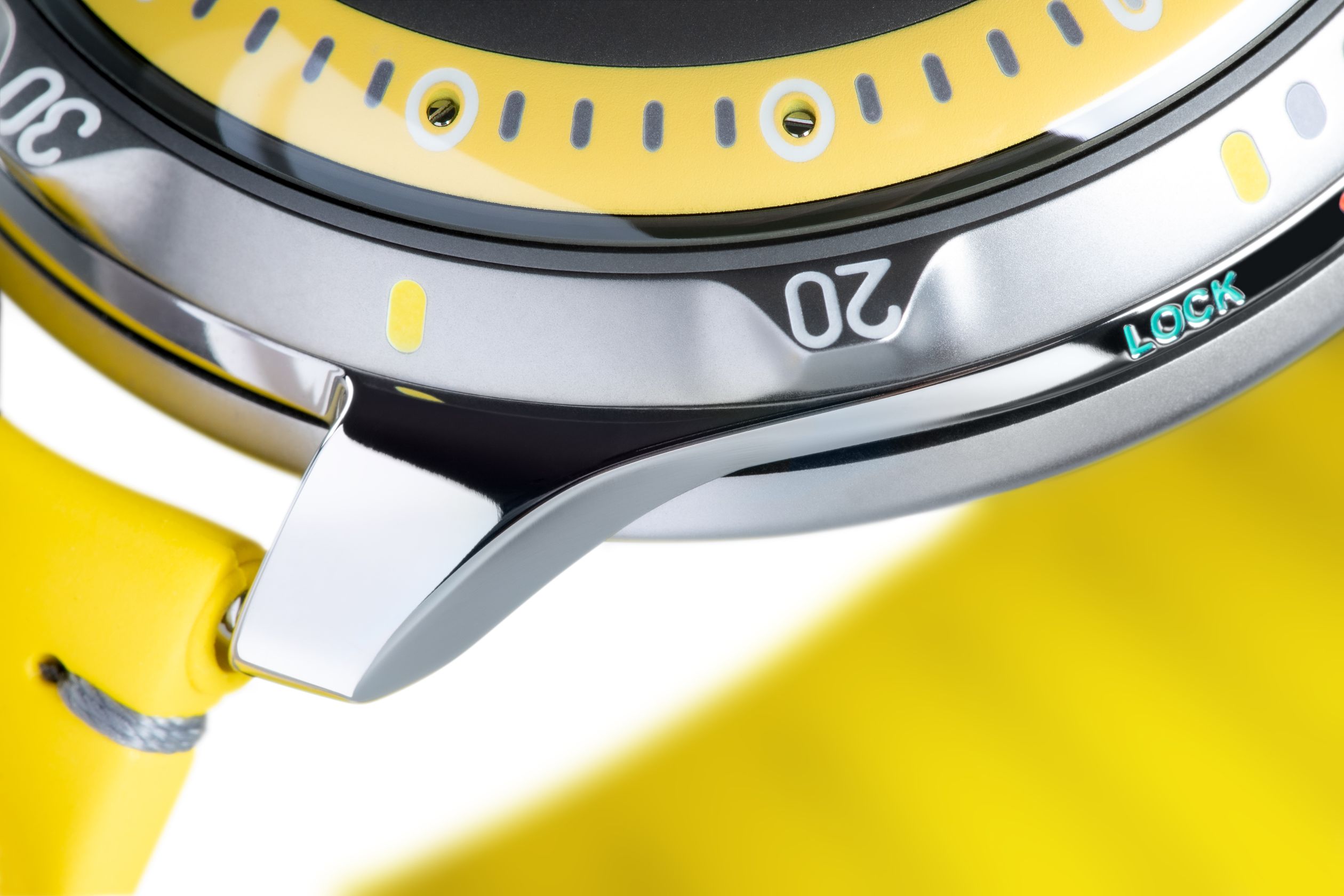 While the unusual case design is certainly interesting, the oil-filled display is the feature that is of most significance to the Type 5 in terms of its intended function as an actual dive watch. The oil filling eliminates the internal reflections that can make traditional dive watch crystals look like mirrors when viewed at sharp angles underwater, and this results in a highly-legible display that remains visible at any angle. The overall dial layout is emblematic of Ressence’s approach to design and it consists of a series of interlocked discs and rings that are all on the same plane, rather than a surface with centrally-mounted hands positioned above it.

As a whole, the dial of the new Type 5 AIT is largely the same as the previous Type 5 dive watch models, except for the fact that it now prominently features the color yellow on its various markings and bezel. Each one of the 12 limited edition pieces features a different one of their hour markers colored yellow, making each one unique and immediately identifiable. Additionally, the 12th watch (which features the Ressence logo at 12 o’clock in yellow) is set to be sold at a charity event in September, with the entirety of the proceeds benefiting the Foundation Prince Albert II de Monaco and the marine conservation efforts of its Pelagos Sanctuary. 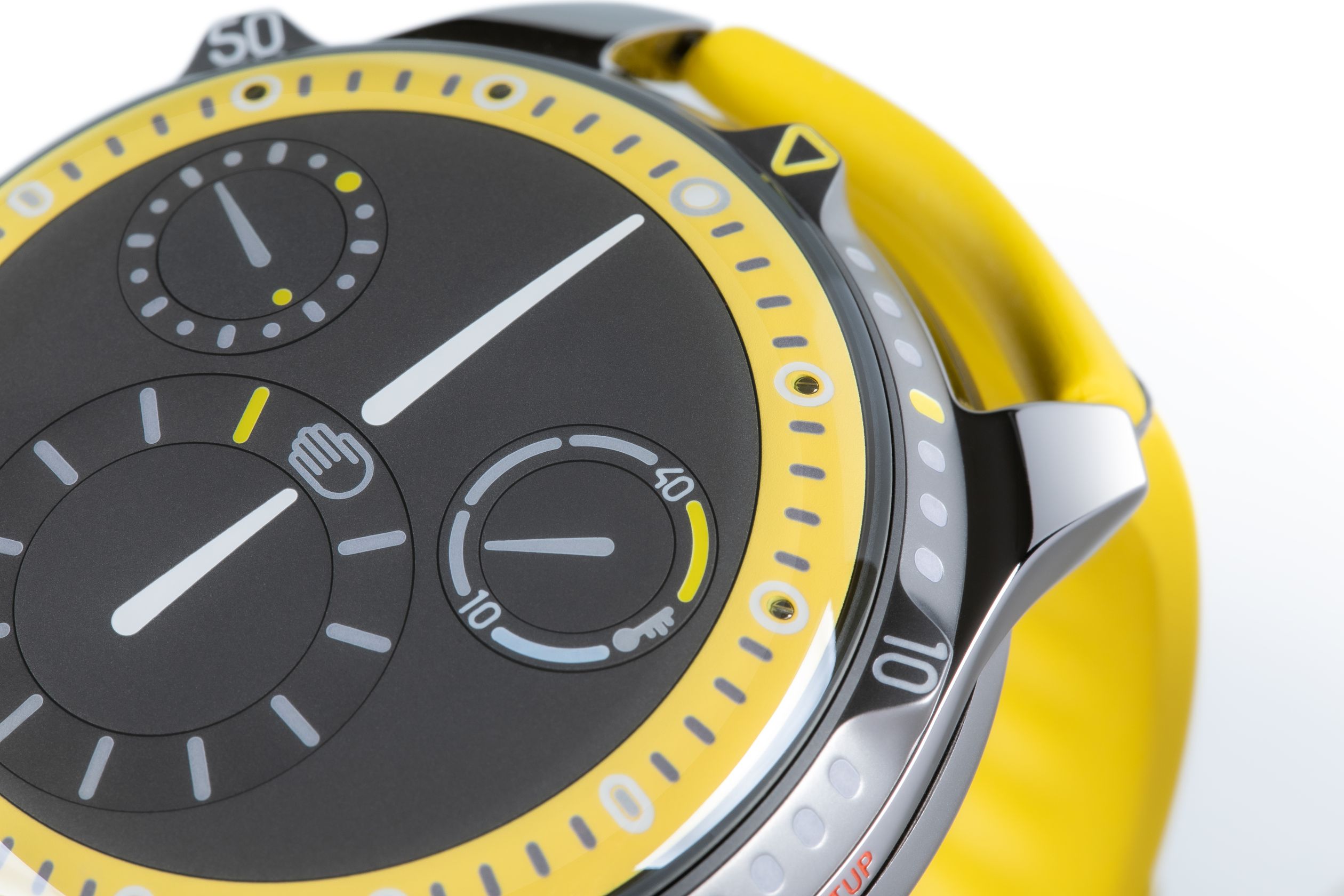 Like other Ressence models, the movement powering the Type 5 AIT is a heavily modified version of a Swiss ETA 2824/2 automatic caliber, which has an operating frequency of 28,000vph and a power reserve of approximately 36 hours. However, in addition to the Ressence Compression Lock System that enables winding and time-setting through the case-back, the movement inside the Ressence Type 5 is further modified with the brand’s patented ROCS 5 (“Ressence Orbital Convex System”), which includes the magnetic transmission responsible for its unique disc-based display.

To contend with the way that oil volumes fluctuate due to changes in temperature, the movement inside the Type 5 is also fitted with a unique system that consists of seven small mechanical bellows that increase or decrease in size depending on how much the oil volume causes them to compress. This enables the watch to handle fluctuations in temperature without running the risk of damage due to the expanding volume of oil inside the hermetically sealed section of its case. Keeping consistent with the yellow color theme, the Ressence Type 5 AIT is fitted with a bright yellow rubber strap, which measures 24mm wide and is fitted with a matching pin buckle made from polished Grade 5 titanium. 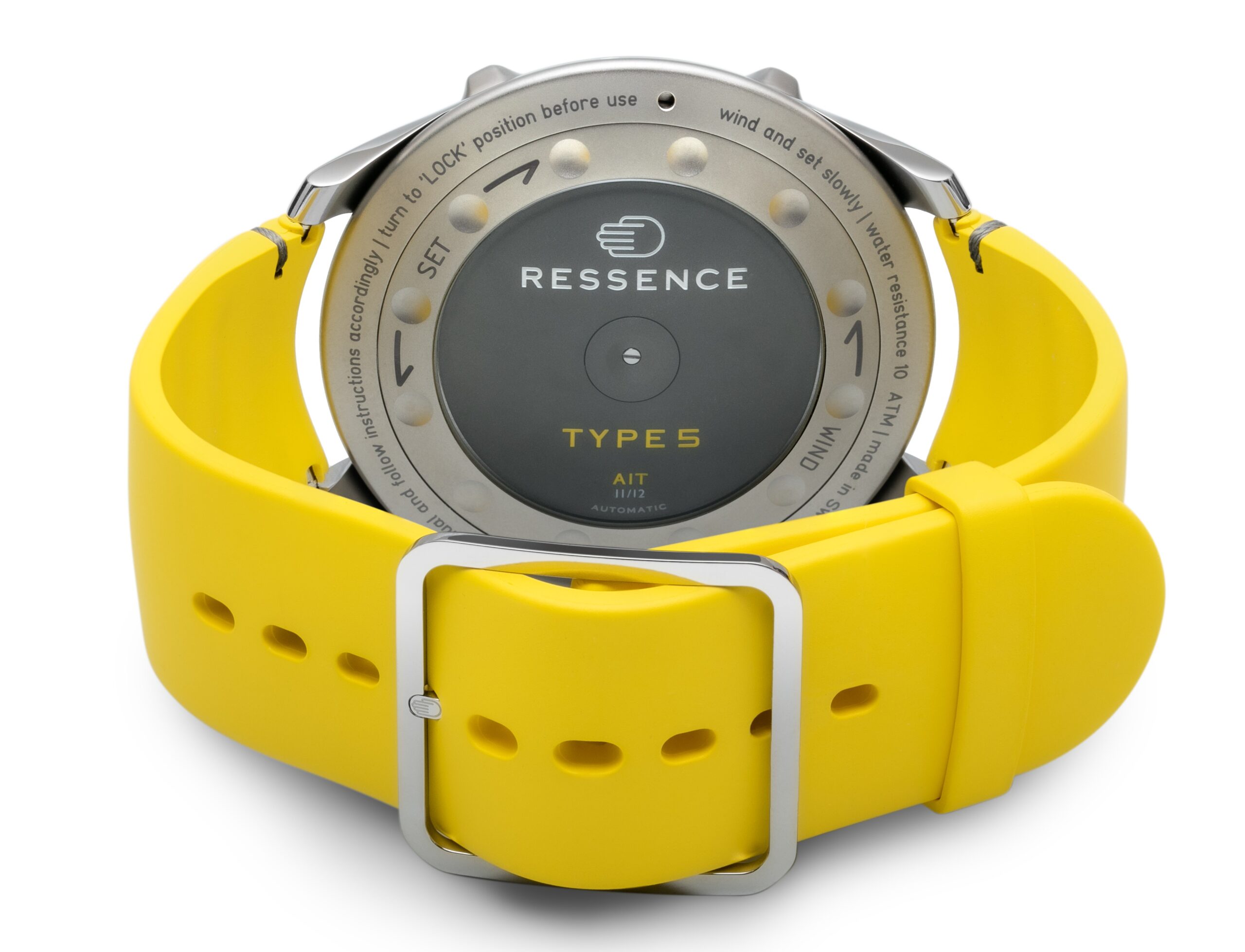 Since the brand was first founded in 2010, Ressence’s calling card has been its unique disc-based displays and oil-filled cases. While this makes for a striking visual aesthetic when viewed on dry land, this unique approach arguably offers the most benefits when applied to a dive watch and the Type 5 divers make full use out of the brand’s innovative and hyper-legible display. With an official retail price of EUR 35,500, production of the Ressence Type 5 AIT will be limited to just 12 examples worldwide, with the 11 publicly-available ones sold exclusively through Art In Time in Monaco, and the 12th set to be auctioned at a charity event in September. For more information, please visit the official Ressence website.