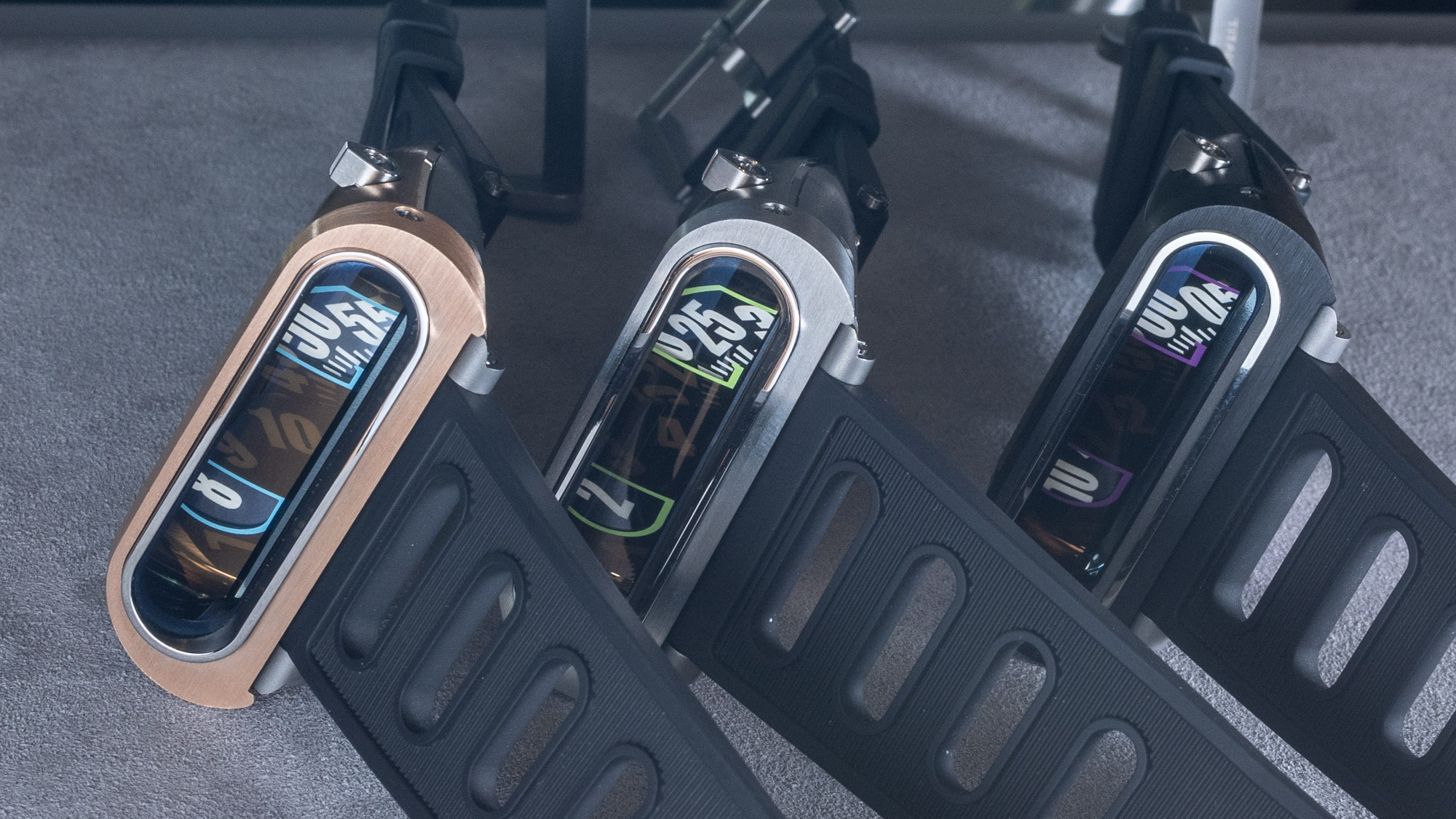 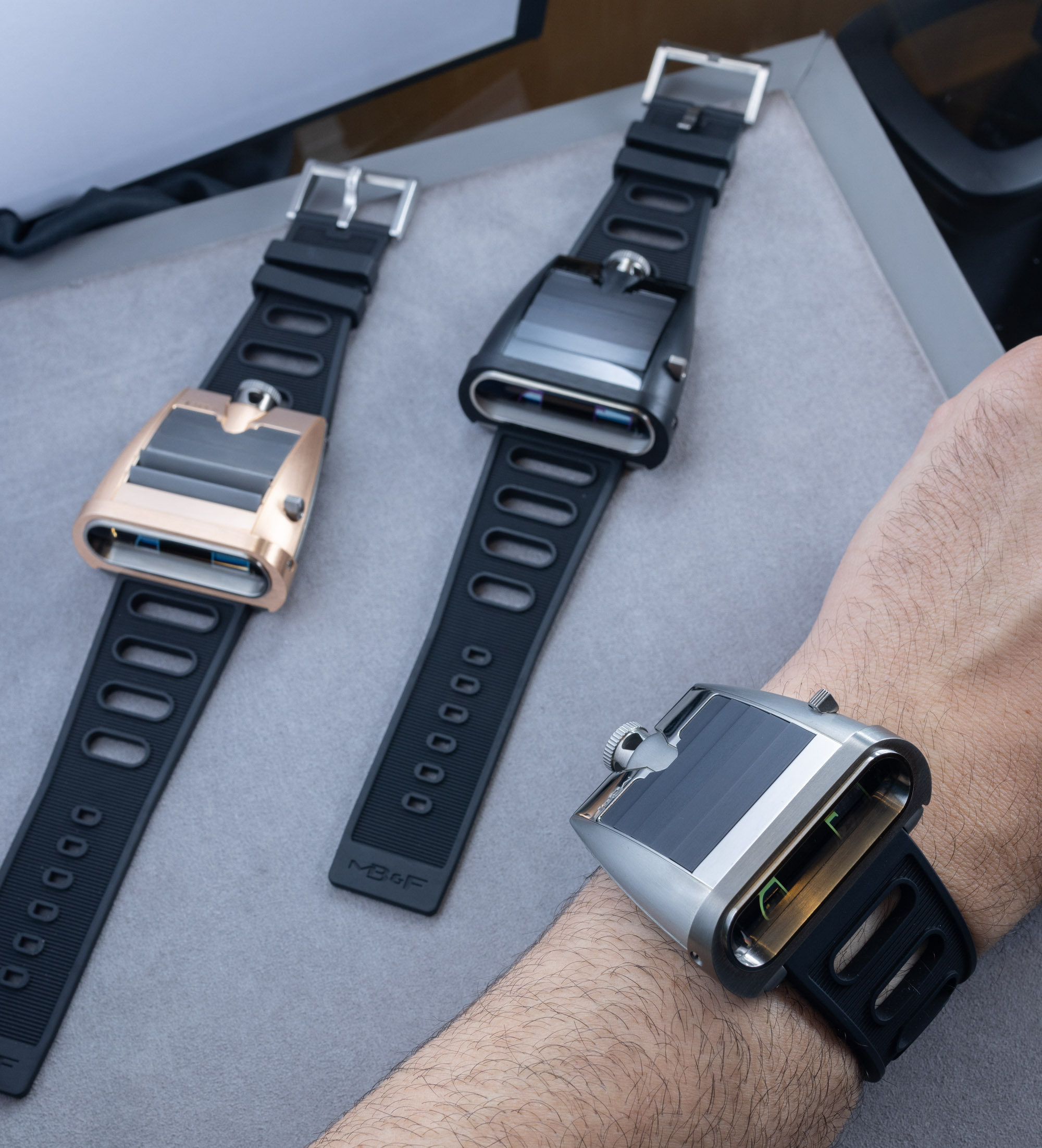 It has been about 12 years since Geneva-based MB&F originally debuted the Horological Machine No. 5 “diver’s watches.” MB&F’s Max Busser wanted to develop a side-reading wristwatch like those he liked from the 1970s (including an Amida he admired), but one that fits neatly into his high-end and lavishly engineered Horological Machine family. Recall that this was just one year after MB&F decided to split its product family into the HM and LM (Legacy Machine) collections, and at a time when MB&F wasn’t nearly as commercially popular as it is today. With MB&F having developed much as a brand over the last decade, I thought it would be interesting to do a little retrospective on the entire MB&F Horological Machine Number 5 family, which includes three very rare models that I am lucky enough to share with you here, having seen them all at the Menlo Park, CA-based Stephen Silver retailer (an MB&F authorized dealer).

MB&F did not release these three MB&F HM5 watches all at once. Rather, they were released one at a time over a series of a few years each as a limited edition of 66 pieces (as a nod to the famed Route 66 road here in the U.S.). The first MB&F HM5 model to be released was the zirconium version (it looks like titanium) known as the “On The Road Again,” from 2012 that I reviewed on aBlogtoWatch here. A year later in 2013 MB&F released the 18k rose gold HM5 RT. Finally, in 2014 the series ended with the black-toned MB&F HM5 CarbonMacrolon. In all, only 198 pieces of the Horological Machine No. 5 were ever produced, and a few of them still trade between owners on the open market today. 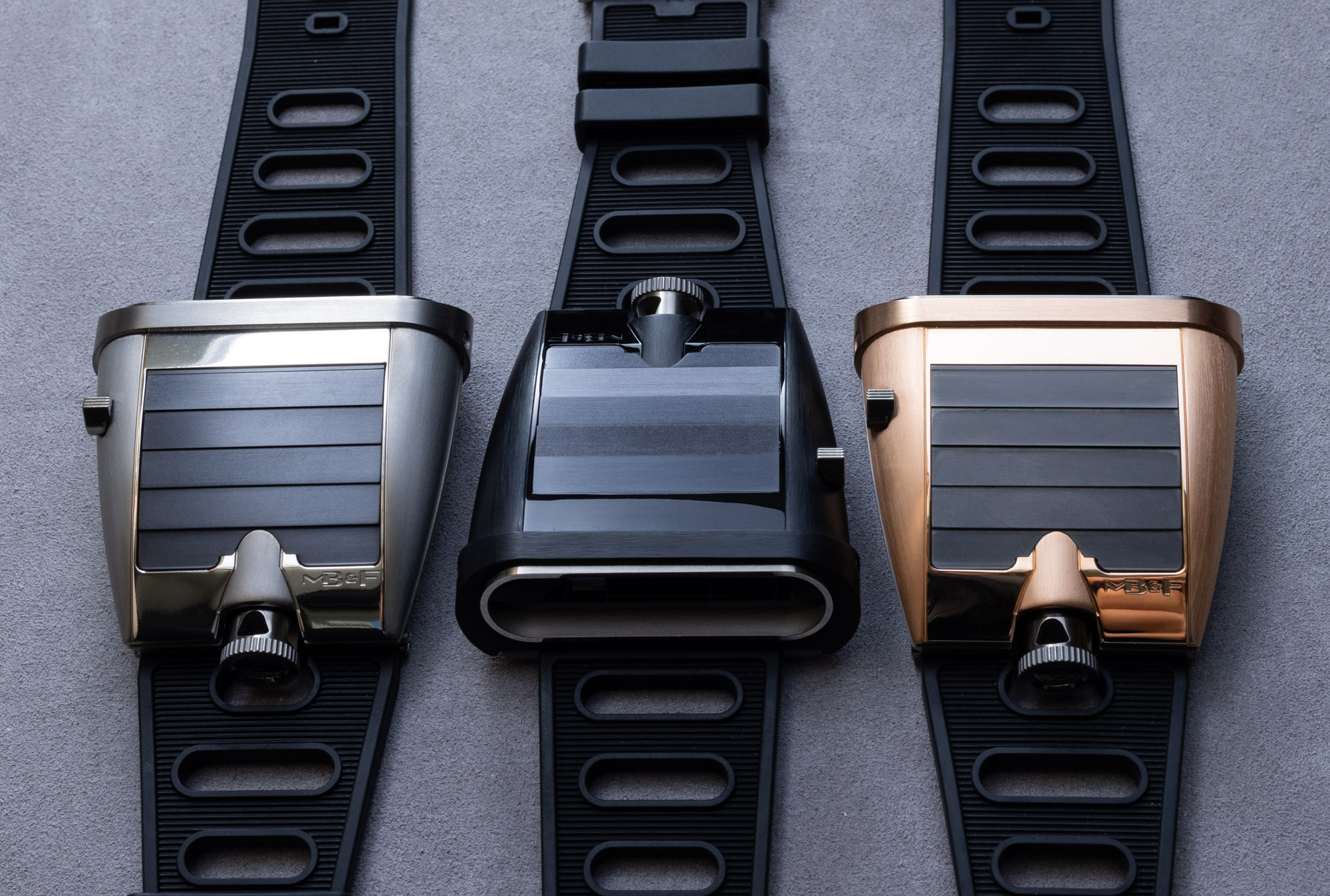 When Max Busser first debuted the Horological Machine No. 5, it was received with mixed results — mainly because most collectors still didn’t know too much about vintage driver’s watches or the kinds of products that inspired Max Busser and the design team. Max Busser didn’t only want to come out with an MB&F take on this side-reading, digitally displayed mechanical watch concept but also wanted to create a case that reminded him of one of his favorite cars. That’s the neat thing about this wedge-shaped case design — it is meant to look like the rear part of a Lamborghini Miura. The iconic late 1960s Italian sports car had a distinctive set of horizontal louvers over the rear window (that were later emulated in other cars, of course) that made their way into the watch. Pretty much the only thing missing on the HM5 to make you recognize it as part of the car is a set of wheels…

The HM5 case has a series of interesting “gadget” features that I think are an important part of the story, and demonstrate how much effort Max Busser and the MB&F team put into a product like this. First is a small lever that opens and closes two of the case-top louvers. Opening them allows light to enter, which in turn hits the luminant on the time-indicating discs (which actually point in this direction). Thus, the opening and closing louvers allow the dial’s luminant to be charged. Given the opening of this section of the case and the ability for water to enter it, MB&F designed a water drainage system in the form of two small holes that are placed where exhaust pipes would be if the caseback was the rear of a car. MB&F fully admits that this idea came from one of the brand’s collectors, and they were happy to integrate it into the final HM5 case design. 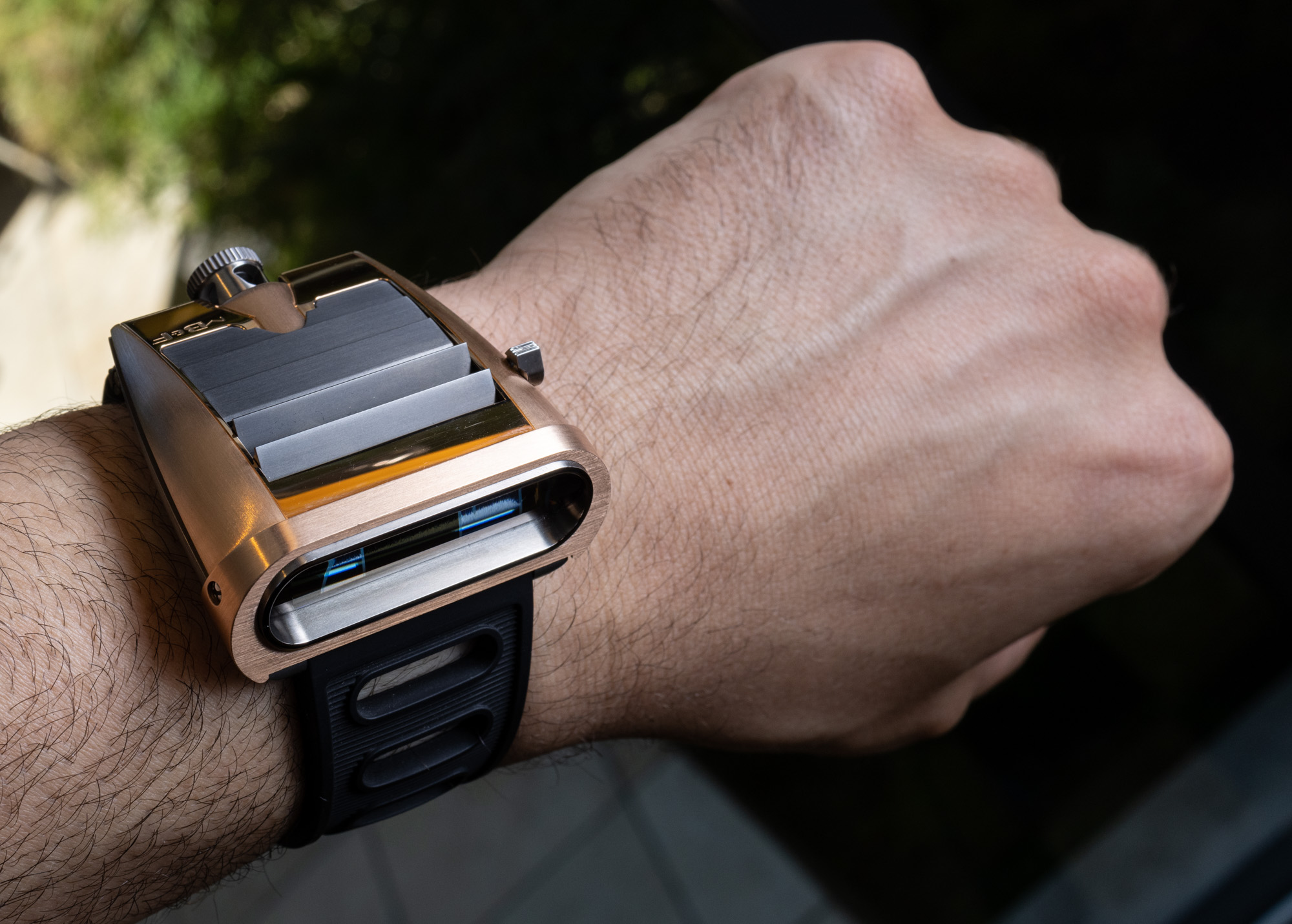 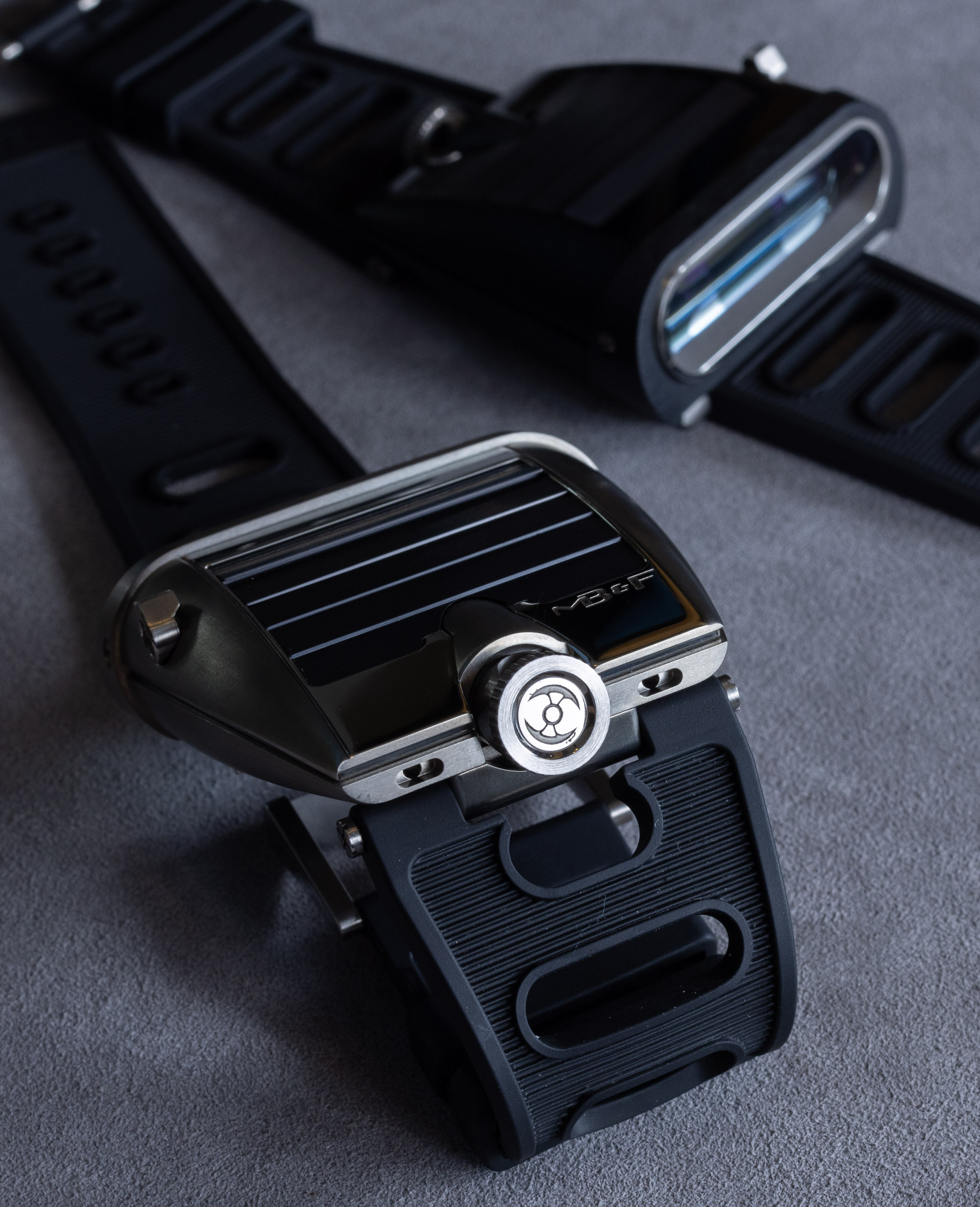 One of the most interesting gadget features of the case is the sapphire crystal. Rather than merely being a protective element over a watch face, the crystal is both a magnifier and a prism. In order to display time on the side of the case, MB&F developed a system where a traditional up-facing display is projected to the side via a prism. Rather than hands to indicate the time, the movement uses two slowly turning discs (one for the hours and one for the minutes). The prism both magnifies the size of the display and also projects the image to the side of the case to be read as is common in driver’s watches. Why a driver’s watch? The idea is that when the information is displayed on the side, your eyes can read it while your hands remain firmly in place on a vehicle’s steering wheel. Each version of the HM5 watch used a different color accent to indicate the time, being blue, green, or purple.

On the wrist, the HM5 case is surprisingly comfortable (pretty much all MB&F watches are), even though it has larger dimensions. The lack of protruding lugs and the fact that they sit on the very bottom of the case allows the HM5 case to sit comfortably on top of your wrist on the bespoke rubber strap with oblong portholes meant to mimic the shape of the dial opening. Water resistant to 30 meters, the Horological Machine No. 5 case is 49mm-wide, 22.5mm-thick (at its thickest point), and has a 51.5mm case length. The entire case, alone, requires 80 parts to assemble. 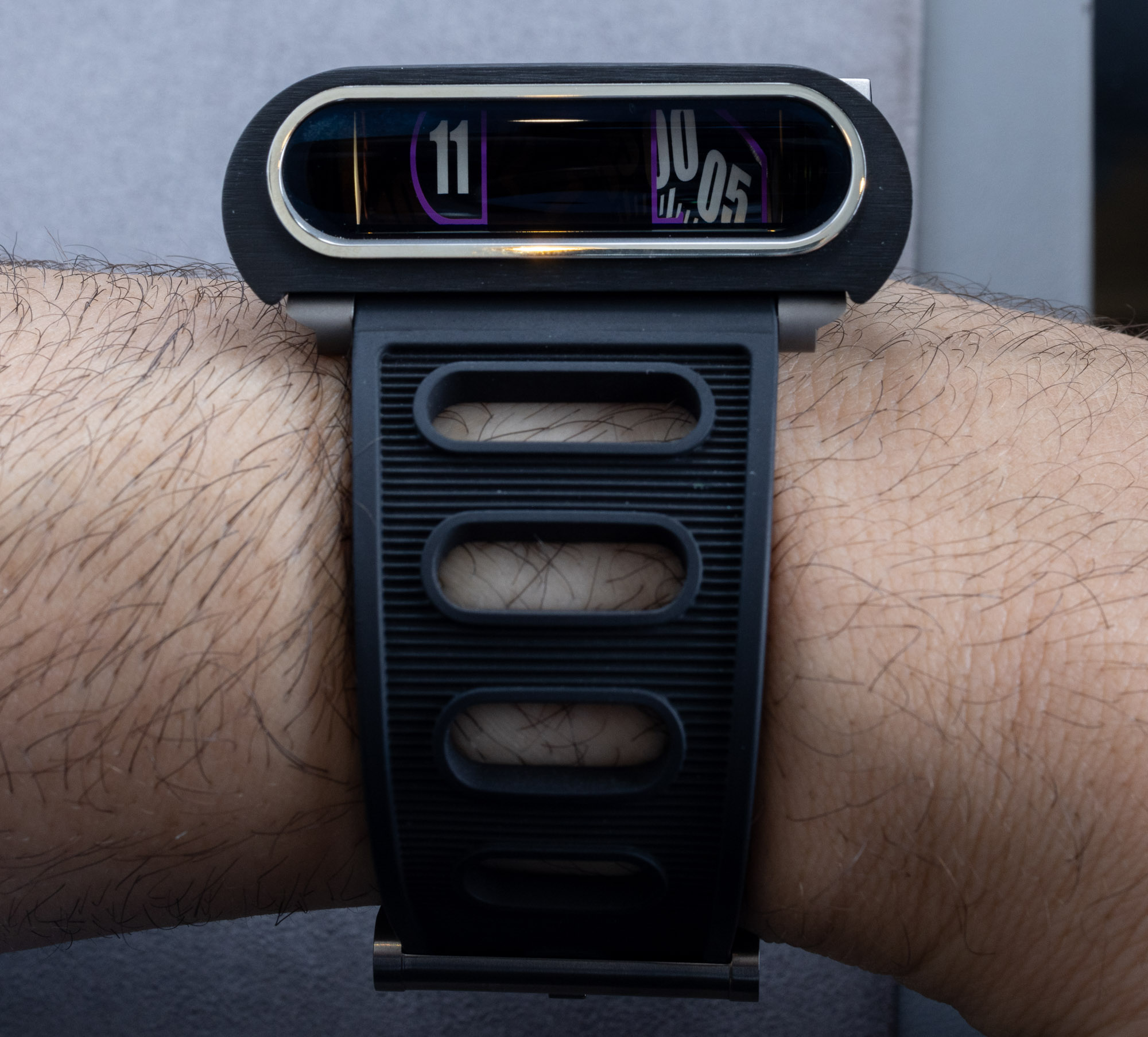 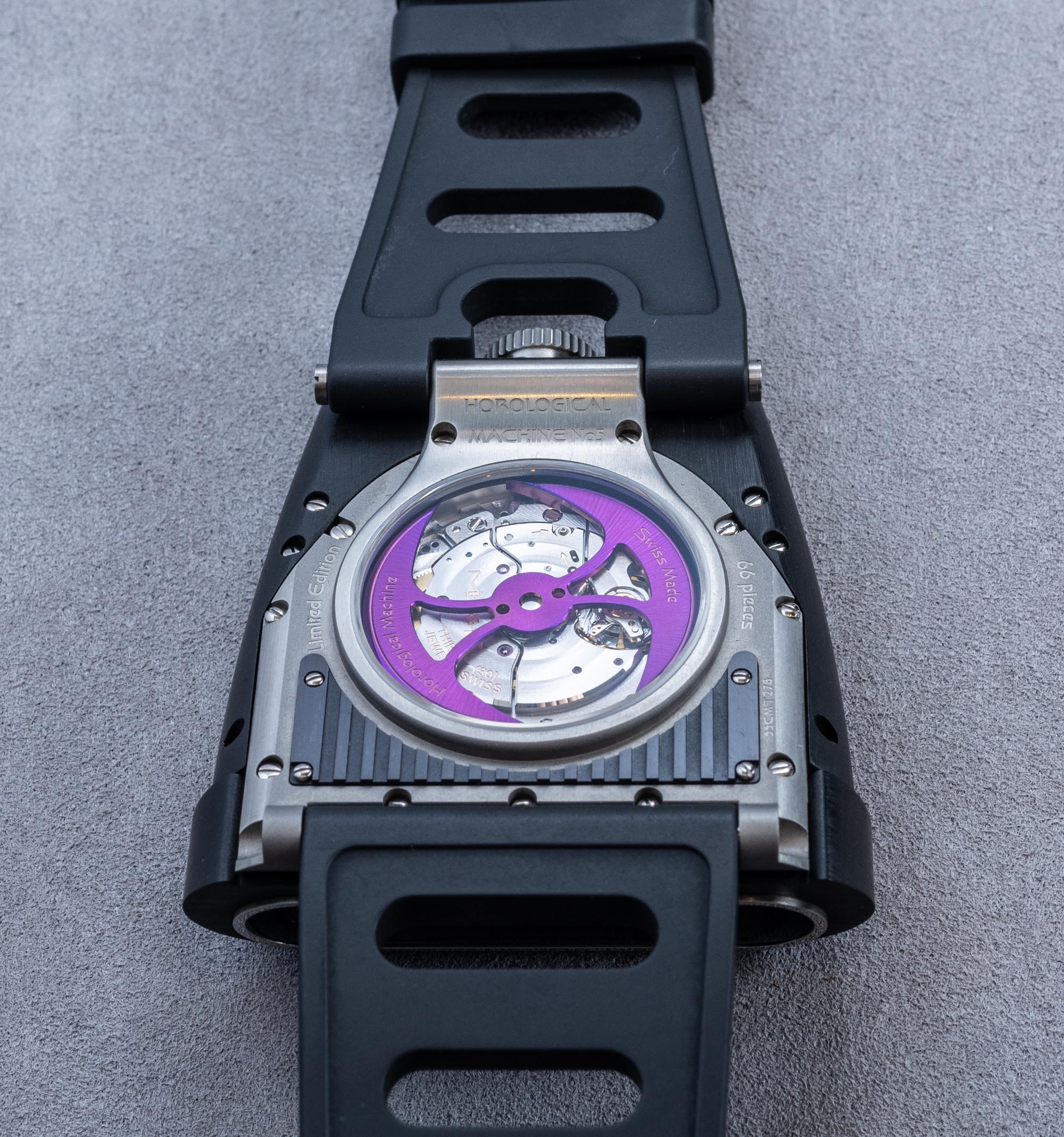 At the time MB&F developed the HM5, it was still mainly using Girard-Perregaux automatic movements as the base for most of its mechanisms. The brand doesn’t do this much anymore, but it was a good concept because it allowed them to use a higher-end, very reliable automatic movement to build upon. The movement here (developed for MB&F by its long-term supplier Chronode) can be viewed by a caseback sapphire crystal and operates at 4Hz with 42 hours of power reserve. Each uses a bespoke MB&F battle ax-style 22k gold automatic rotor. The rotor in purple in the HM5 CarbonMacrolon is probably my favorite.

When they first came out, I think it is safe to say that the HM5 watches had not yet hit their stride with collectors. MB&F was still early to reach automotive enthusiasts, and the historic analogs to the Horological Machine No. 5 watches were still mostly unknown. A decade later, things are quite different. Not only have car and watch collectors cross-pollinated much more, but a general wholesale admiration for MB&F and exclusive, small-production brands like it have really blossomed over the last four or five years.  I was always very excited about the HM5 and my opinion hasn’t changed today. I do feel a closer connection to MB&F founder Max Busser in a watch like this because it was very much about him and his personality. MB&F watches today are still excellent, but the trajectory of the brand has shifted away from merely emulating facets of Mr. Busser’s youthful aspirations. All the details and interesting nuances to the HM5 pieces have aged quite well, and in many ways, a watch of this type offers lots of lessons to more novice brands and designers who would like to produce something as impressive. 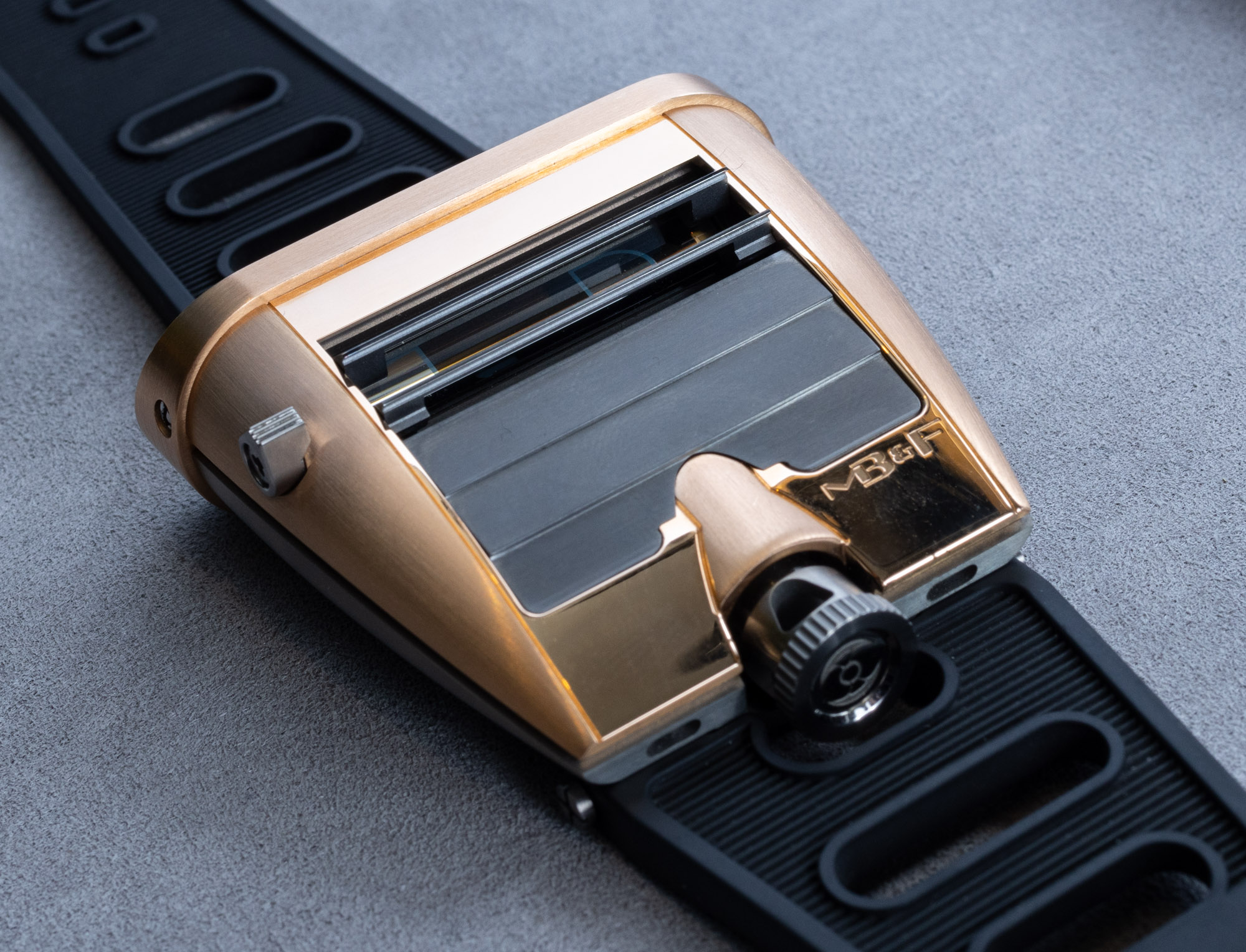 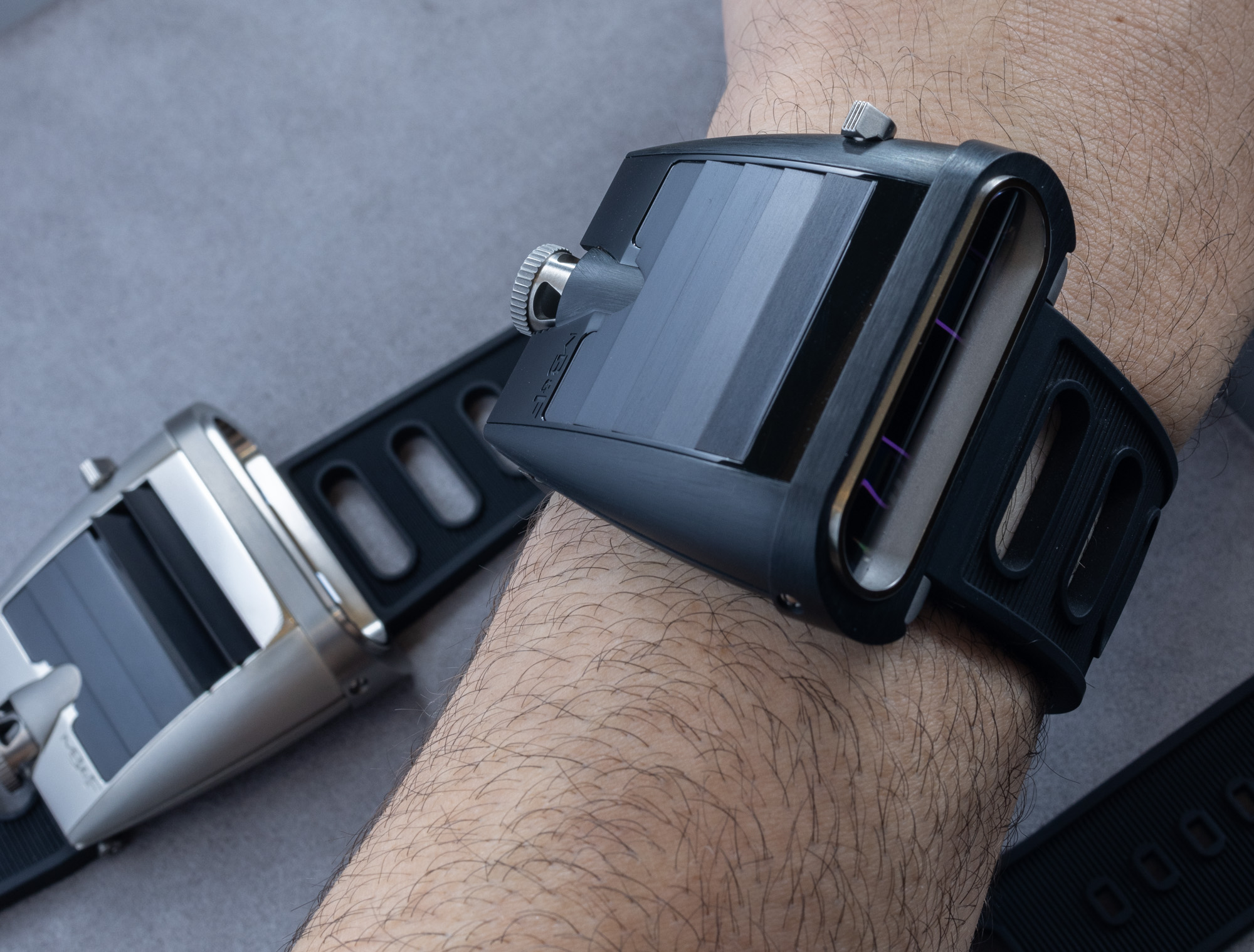 As I mentioned above, each of the MB&F Horological Machine No. 5 watches was produced as a limited edition of 66 pieces. The original retail price for both the HM5 zirconium and HM5 CarbonMacrolon was $63,000 USD. The 18k rose gold MB&F HM5 RT has a retail price of $82,000 USD. Learn more at the MB&F website here.