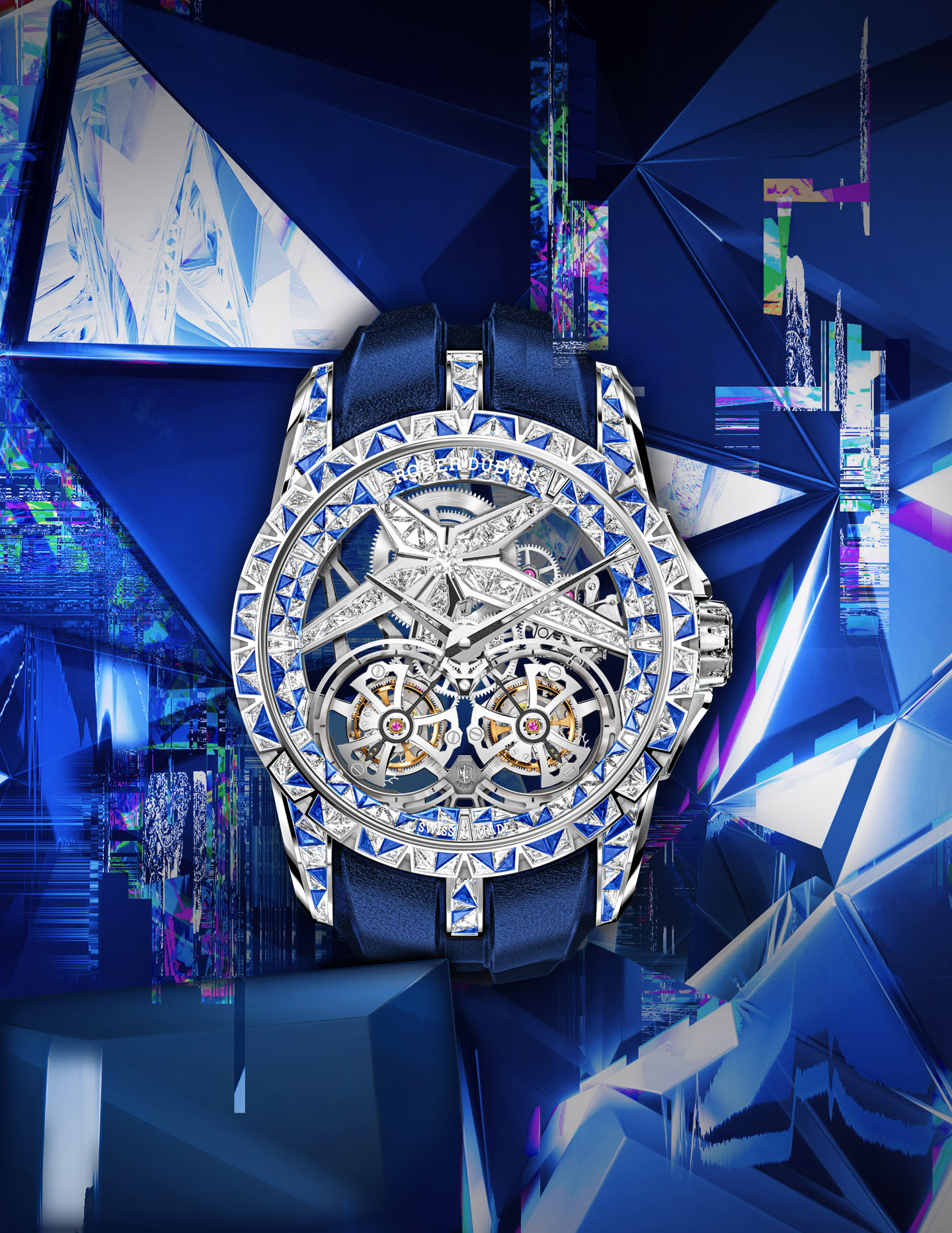 Roger Dubuis Excalibur Superbia Watch Is ‘The Epitome Of Excess’ 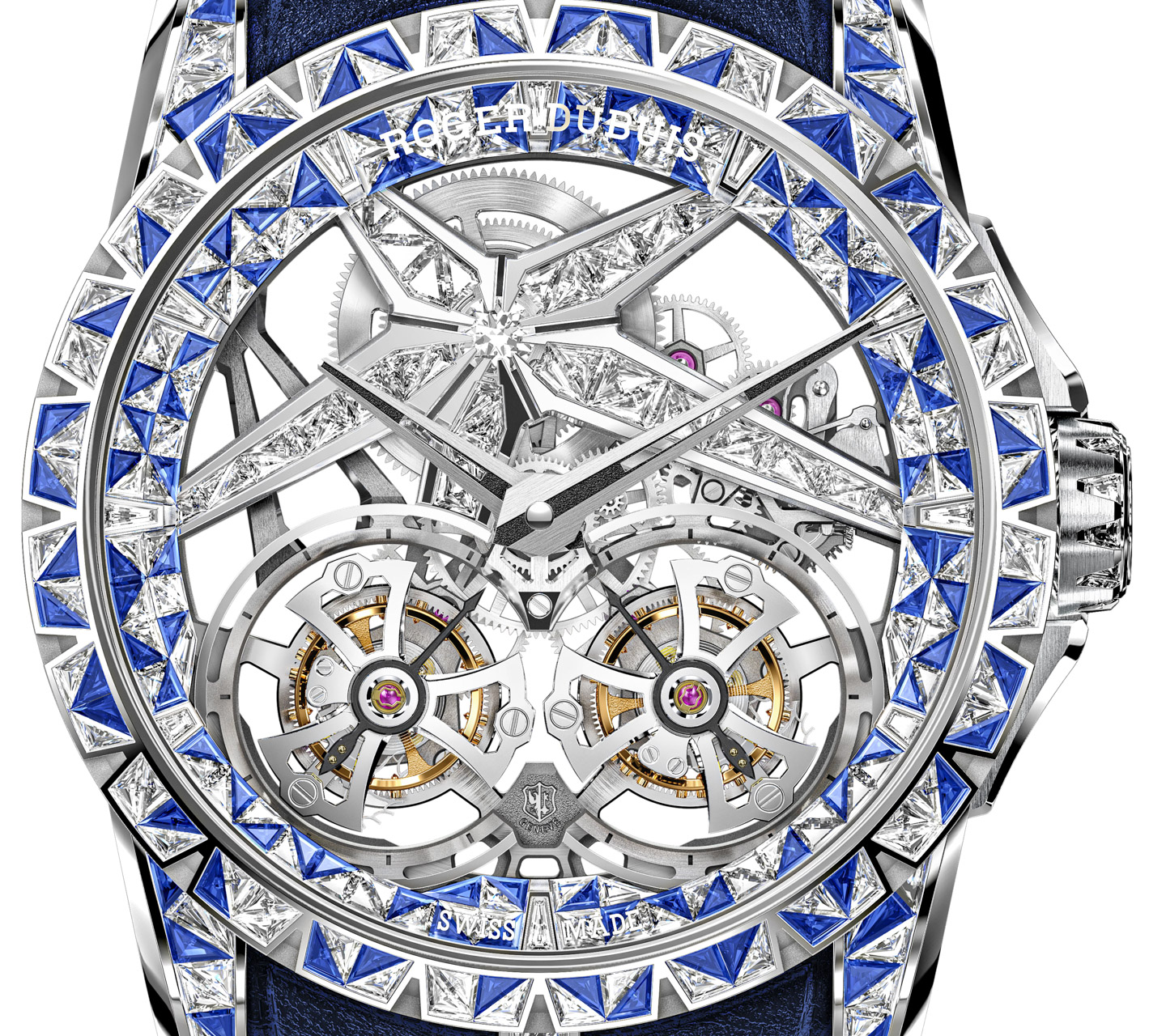 As a one-of-kind timepiece for 2020, Geneva-based Roger Dubuis has released the Excalibur Superbia — a product it refers to as a “hyperwatch.” The unveiling of the piéce unique product will be at the inaugural Watches & Wonders Shanghai event happening in China this month. The region has long been known as the current epicenter of demand for such decadently luxurious timepieces (though such “hyper-luxury” epicenters have moved around throughout history), but no doubt the release of such a product will prompt some criticism. Indeed, it is hard not to be sympathetic with the jewel-encrusted slap in the face that such a wildly-priced feel-good object sends to the hundreds of millions struggling people out there. Then again, it is important to remind yourself that Roger Dubuis is making just one of these watches. There are, indeed, enough supervillains out there who need to satisfy their watch fix too. This is for them.

In fact, when such ultra-luxury watches are featured by Swiss luxury brands like Roger Dubuis, there’s often a notable strategy associated with them. Hyperwatches like the Excalibur Superbia (not be confused with the also comfortable but less opulent Excalibur Suburbia, or the chilly yet attractive Excalibur Siberia) tend to be released during poor economic times. The idea is that it is more difficult (albeit more profitable, in good times) to sell a larger number of watches at a lower price than a smaller number of watches at a higher price. Roger Dubuis and its kin companies who specialize in high-end horology know that elite consumers have had their disposable incomes far more insulated than most average luxury consumers. During times when selling in volume is a challenge, hyperwatches like the Roger Dubuis Superbia help make up for lost sales in other areas. It is a tactic as old as the luxury industry itself. 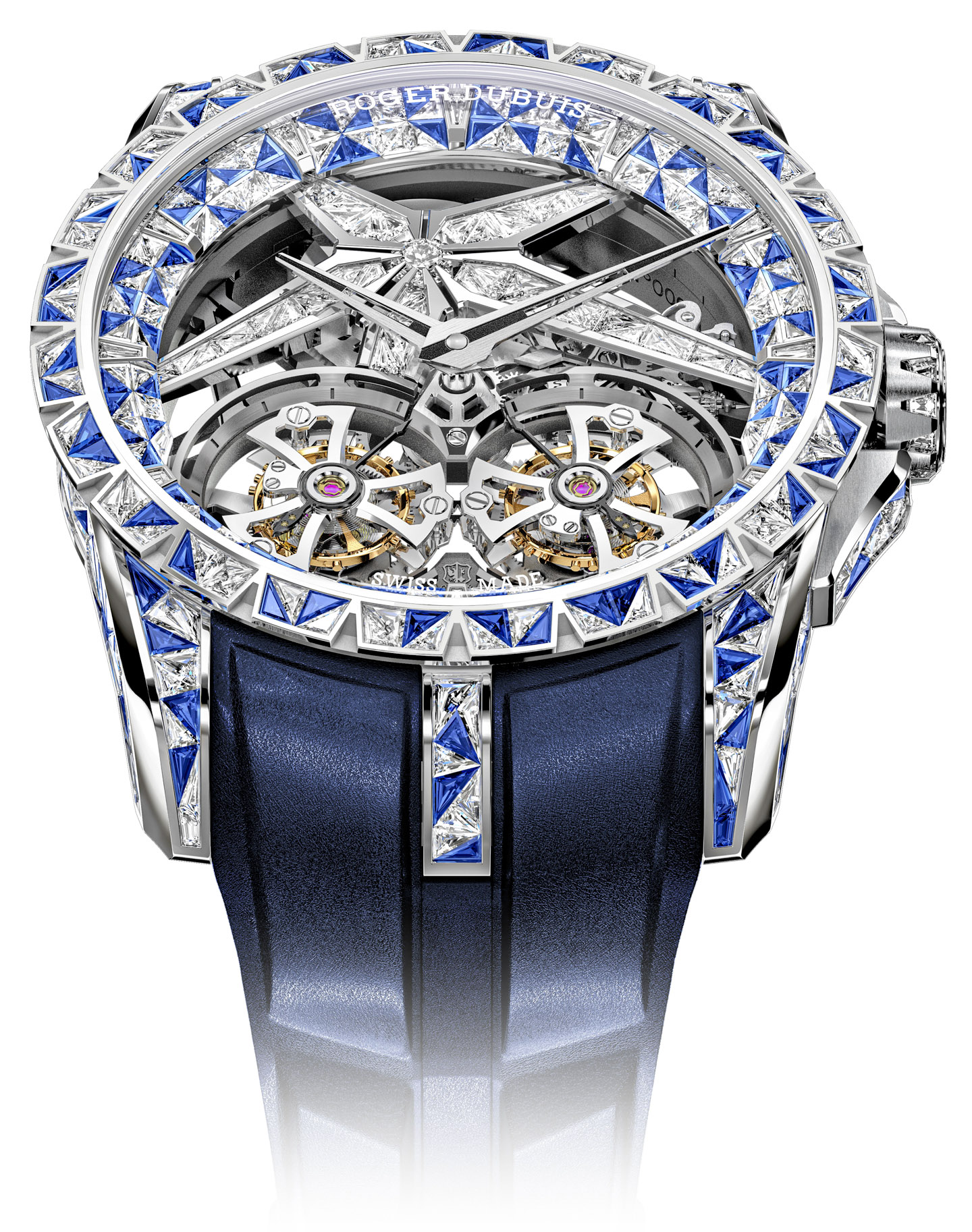 Roger Dubuis opens its discussion of the Excaliber Superbia on a welcome honest note by exclaiming that it is “the epitome of excess.” While the timepiece industry toils at pushing the boundaries of what excess looks like, I think Roger Dubuis can take home a prize thus far for one of the most decadently appointed watches of 2020, though sister Richemont Group brand Piaget (and perhaps others) will have something to say about that.

The Excaliber Superbia is 45mm-wide (14.4mm thick and actually water-resistant to 100 meters) in an 18k white gold Excalibur-style case set with alternating tetrahedron-cut diamonds and deep blue sapphires. There are 600 diamonds and sapphires set by hand into the watch. Roger Dubuis openly describes the watch as “the ultimate totem for a tribe of people who trust that life is but a game that is for making the most of” — in other words, those who successfully (and often egregiously) exploit others. And yes, it can be helpful when such people are easily marked — such as with a one-of-a-kind blue and white glistening timepiece. Roger Dubuis is lending progressive efforts a hand by helping to identify people of interest. See, everybody wins in a fairness-focused society like Switzerland.

I always find it charming when proud Swiss watchmakers refer to their actions as “crazy.” That means they know the outcome to be a bit… controversial. To them, the achievement in such a timepiece has nothing to do with its social status-indicating value or wealth appeal. Instead, the focus is on the incredible complexity required to choose, cut, and set the many geometrically shaped precious stones. Not only that, but diamonds are set on the dial and movement of the watch, in addition to the case and strap.

This is all icing on the cake topping Roger Dubuis’ popular in-house-made double tourbillon movement known as the Caliber RD0108SQ. The movement was among the first to feature not one, but two adjacent flying tourbillons that together make for an even more visually animated dial. This is all against the backdrop of the distinctive Roger Dubuis star emblem made out of the skeletonized dial bridges. The manually wound movement is comprised of 319 parts and operates at 3Hz (per each of the balance wheels) and has a power reserve of 72 hours. It tells just the time with double-seconds indicators. The Roger Dubuis movement is further awarded with the Geneva Seal. 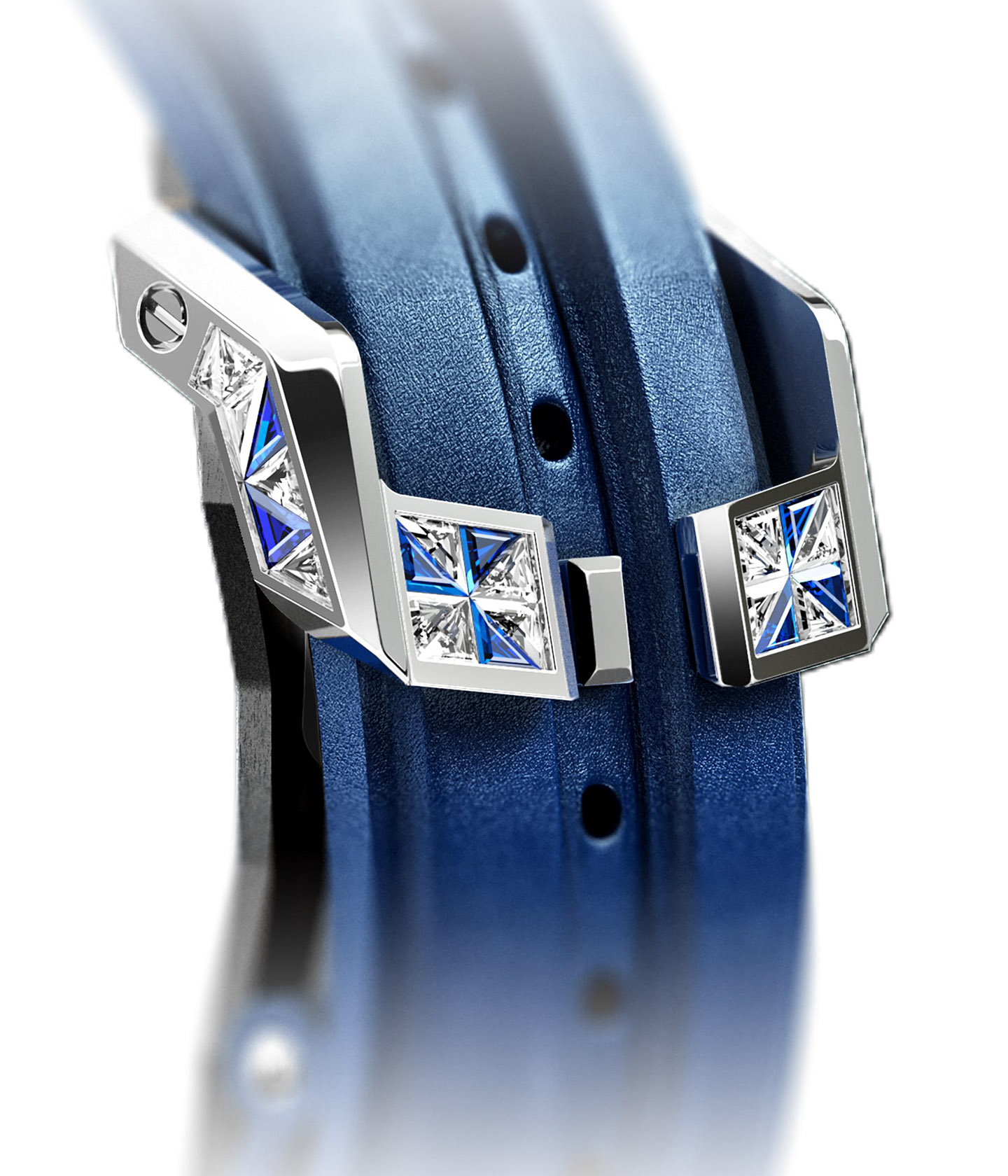 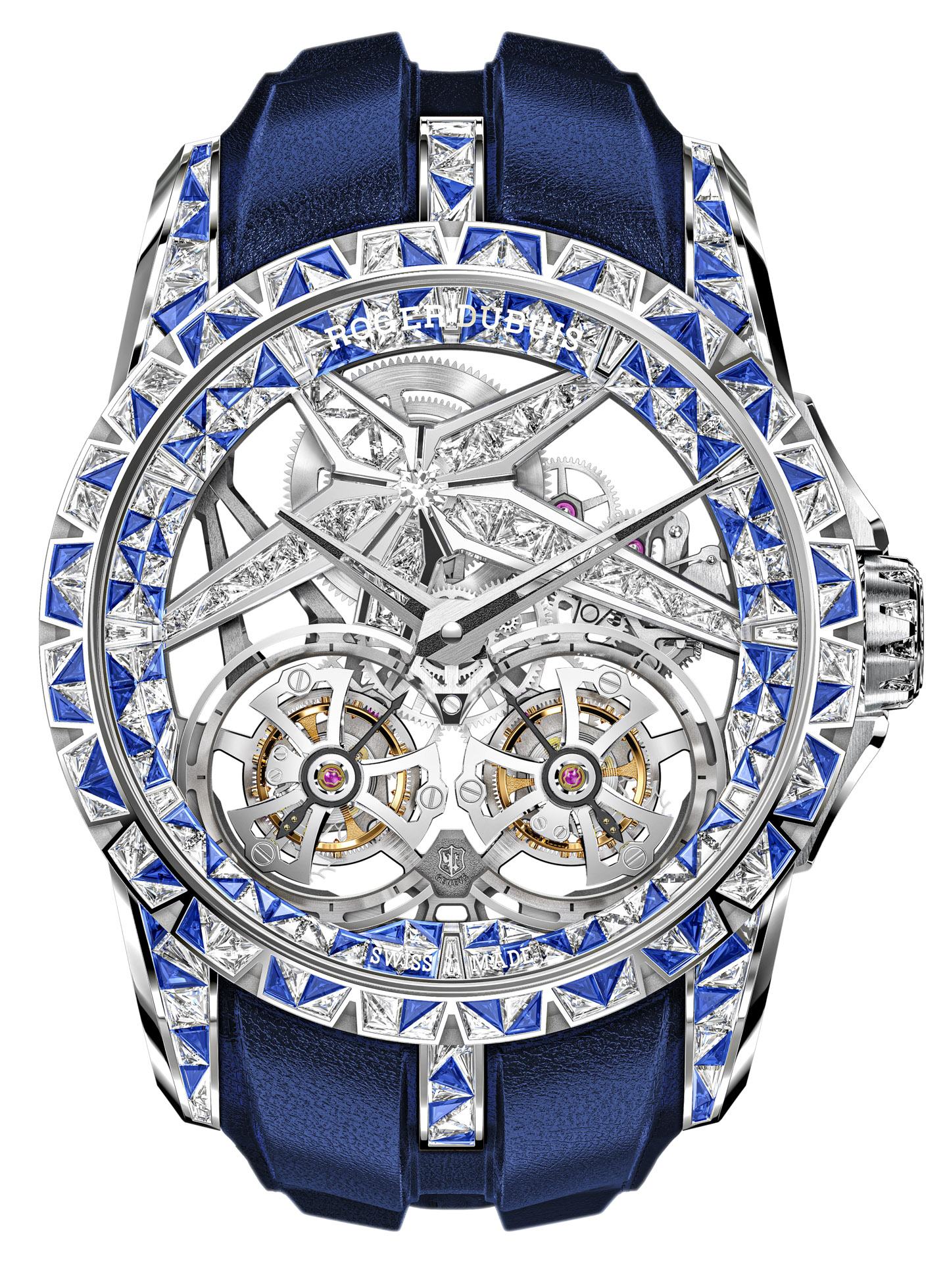 In addition to the time required to making the underlying Excalibur Double Tourbillon watch, Roger Dubuis claims that additional 900 hours of work went into the gem-setting efforts required to give the Excalibur Superbia its superbly elaborate looks, which are said to be inspired by the design work of Kaz Shirane. A final detail on the watch is a discreet “Memento Mori” message written on the watch. Roughly translated into “remember, you will die,” the traditional purpose of the Memento Mori was to impress upon people the need to live their lives to the fullest, else regret missed opportunities. Moving forward, Roger Dubuis claims that each of its piéce unique “hyper-watches” will have Memento Mori also inscribed on its movements. Translated to buyers, that means, “You can’t take it with you when you die (so you better spend it today)”. Price for the one-of-a-kind Roger Dubuis Excalibur Superbia reference RDDBEX0821 watch is $858,500 USD.  Learn more at the Roger Dubuis website here.