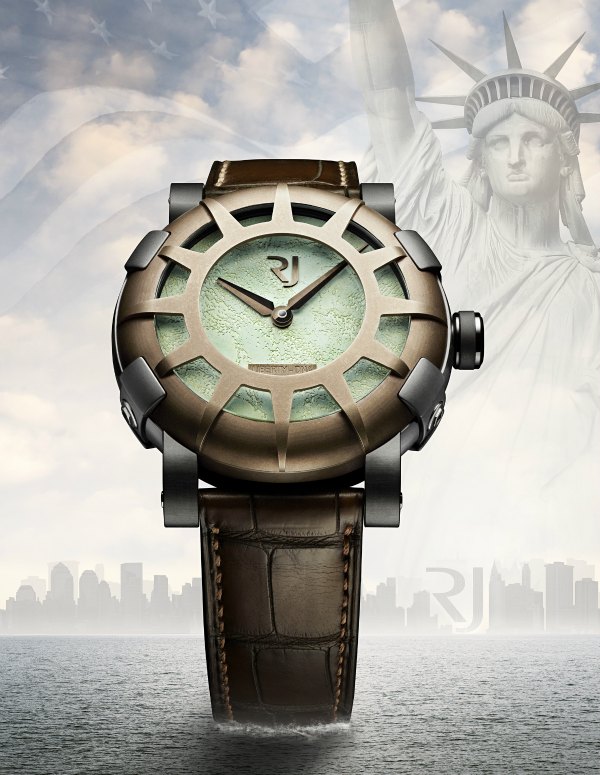 The newest “DNA” watch collection from Romain Jerome will be the Liberty DNA timepieces. These watches will each incorporate some metal from the actual Statue of Liberty, and feature a unique design meant to honor the statue while not simply featuring imagery from it on the case and dial. Do you see something a bit steampunk about it? Maybe, while this isn’t per se a Steampunk watch (as many other Romain Jerome models are), the Liberty DNA (ref. RJ.T.AU.LI.001.01) does have a 19th century feel to it.

Romain Jerome worked in collaboration with the Statue of Liberty-Ellis Island Foundation as well as the Gold Leaf Corporation on this timepiece. These foundations helped Romain Jerome acquire small amounts of metal from the actual statue. The dial of the watch is designed to look just like the oxidized copper look of the statue today. It has no markers, just the signature color and texture of the statue. The dial itself is where metal from the statue is incorporated. Over the dial and attached to the bezel is a star-shaped guard. Looking like crystal guards from long-ago, this is actually meant to remind you of the pointed star crown Lady Liberty is wearing. This bezel and star are also made from bronze and will patina over time.

The Romain Jerome Liberty DNA watch case is 46mm wide in black PVD steel and bronze. The case is a signature Romain Jerome shape while the dial and bezel are totally new. While the dial is obscured with the star crown, it is still legible, especially as the star points serve as ad hoc hour markers. Inside the watch is an RH001-A automatic movement, Just the time with minute and hours on this watch.

On the back of the Liberty DNA watch is an engraving of the liberty torch and flame that the statue is holding up. What I though is interesting is that the watch itself has no full picture of the Statue of Liberty. Meaning that someone could theoretically check it out and have no idea what the watch was all about. I suppose that is cool. Better than having an engraving of the full statue on the dial. I think it would have been cool for RJ to Photoshop an image of the statue with her wearing a giant version of the watch. Attached to the case is a vintage-style brown alligator strap. The Romain Jerome Liberty DNA watch will be limited to 125 pieces and be priced at $14,900. 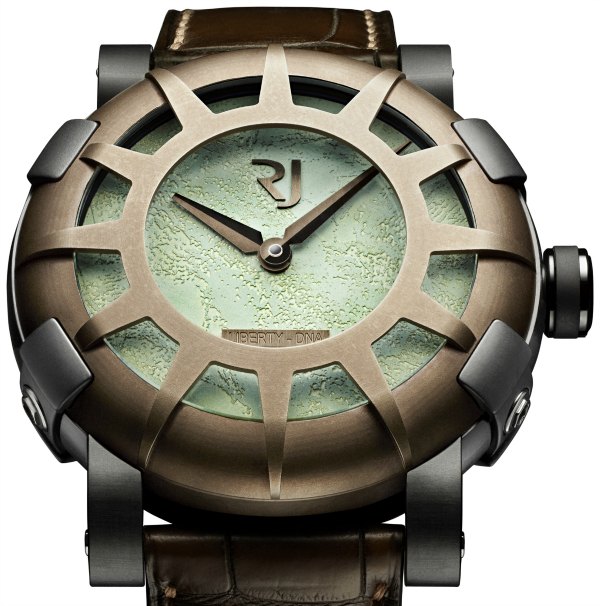 Bezel Bronze bezel which recalls the aesthetic of the statue’s famous crown. It will acquire a nice patina over the time, thereby adopting the Statue of Liberty colour Dial Verdigris coloured dial containing the DNA of the Lady