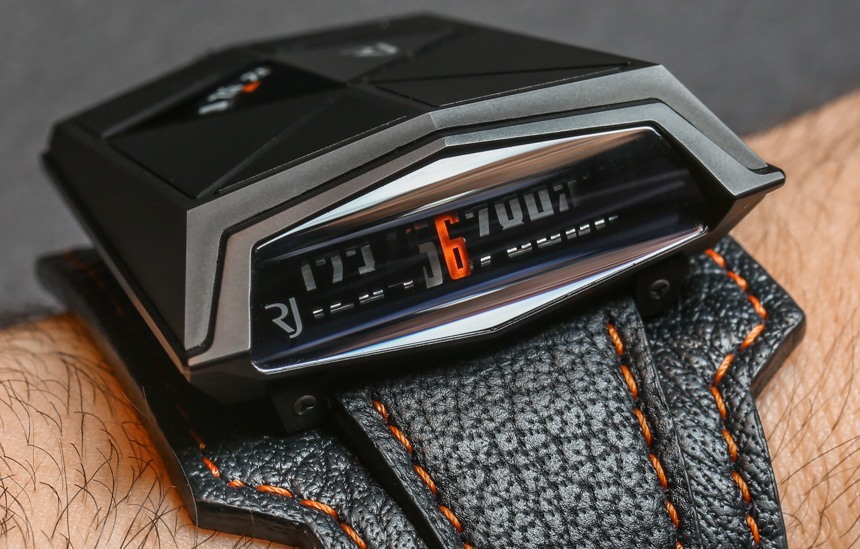 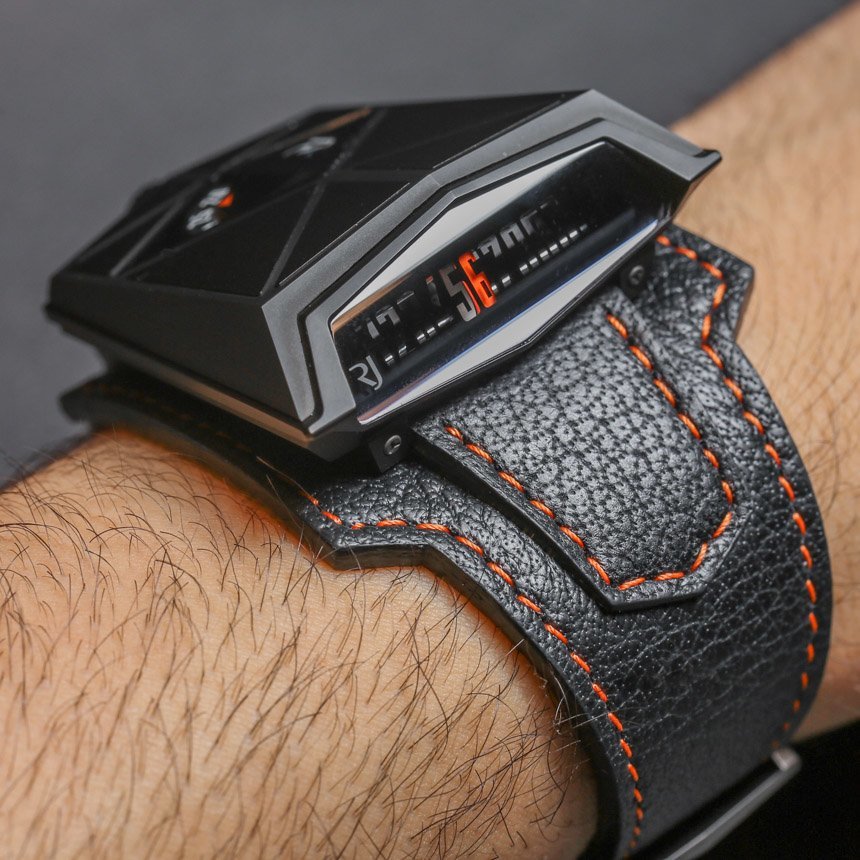 Thematically, the Romain Jerome Spacecraft and Spacecraft Black watches are based on driver’s watches (sometimes called wedge watches), where time is read from the side. Having said that, the Spacecraft is not exactly that, as reading the time requires looking at both the top of the case as well as the side. Everything about the Romain Jerome Spacecraft Black is odd, from how one reads it to what it looks like, but taken together, the package is both artistic and satisfying. 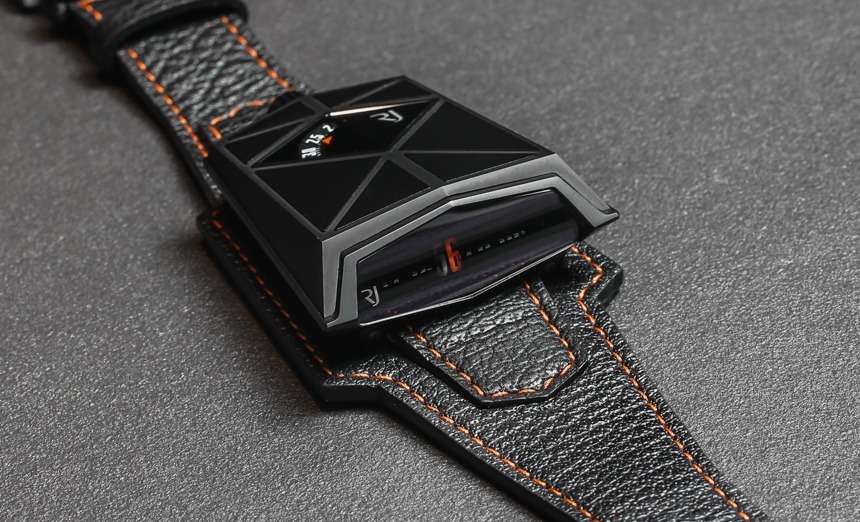 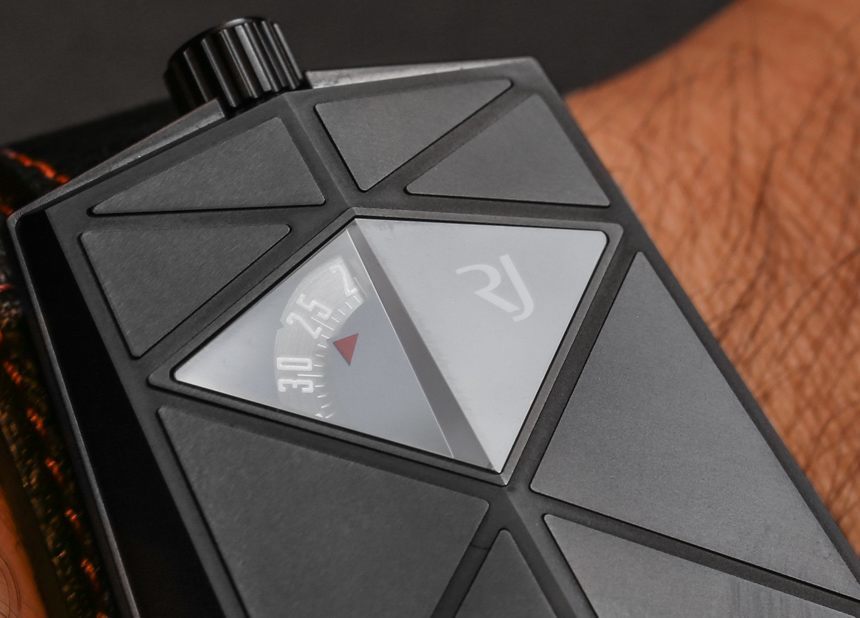 Perhaps I should qualify “satisfying.” If you applaud the successful completion of a complicated concept as the artist sees it, just so a few people can be happy with the end result, then the Romain Jerome Spacecraft Black is a satisfying watch. If you don’t feel a personal connection to the design, then you aren’t going to get much out of this timepiece. I’ve had a lot of discussions over the years about Romain Jerome with fellow watch lovers. It is brand that never fails to evoke a lot of emotion, much of which would be described as negative. This is mostly from people who’ve never actually held Romain Jerome watch in their hands. If you are looking for a logical, utilitarian reason for a timepiece to exist, then look to brands other than Romain Jerome who continue to further the nostalgic notion that an analog mechanical wrist watch is useful. If, however, you subscribe to the notion that we love watches because of their mechanical art, uniqueness, and ability to illicit an emotional reaction then you might “get” Romain Jerome.

Manuel Emch, who runs Romain Jerome, has a sharp sense of humor and refined eye for art. His personal tastes are, of course, for items produced in or inspired by the 1970s and 1980s. He decided to produce the Romain Jerome Spacecraft because I think it is a watch he wanted the brand to make. It is a functional piece of art through-and-through, and like most art, it is best when not everyone agrees that they like how it makes them feel. I was recently wearing a Romain Jerome watch (not a Spacecraft) around a group of watch collectors who seemed to be mostly experienced with more traditionally-designed timepieces. The fact that I had a Romain Jerome on my wrist both confused and intrigued them. “Why would Ariel Adams wear a Romain Jerome, of all things?” 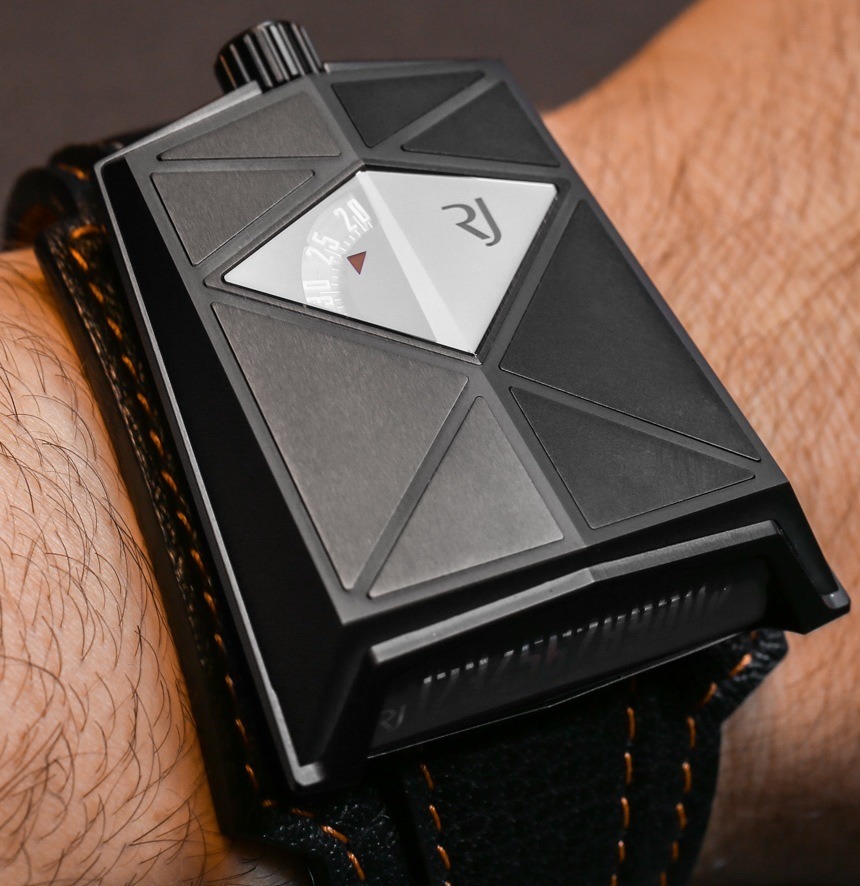 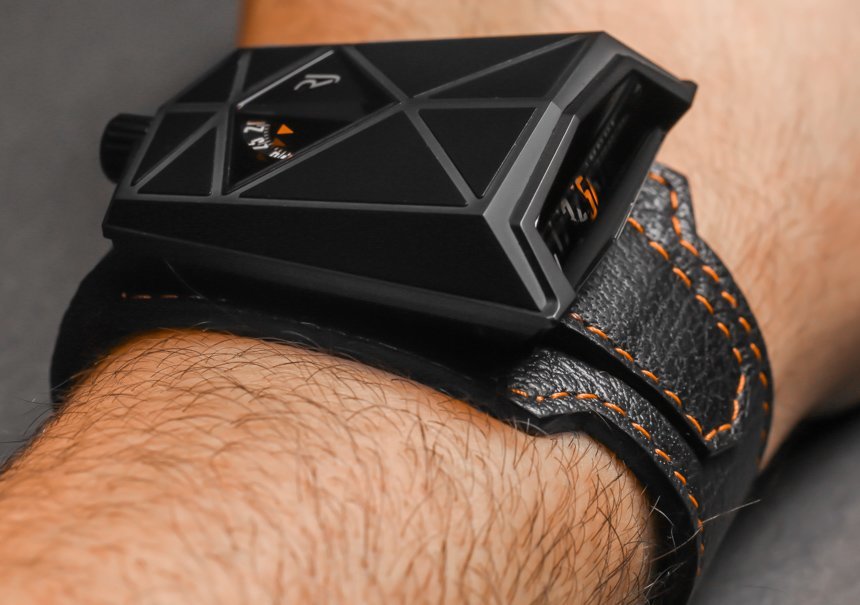 What I attempted to explain was that, while I did feel Romain Jerome watches were inherently expensive, and how not all of them appeal to me, I did appreciate the “point” of the brand. The one on my wrist at the time (from the Steampunk collection) simply made me happy to look at it. I enjoyed the style and quality of the case and was by no means wearing it for the rather rudimentary three-hand movement inside. While pretty much anyone who is a watch collector wears timepieces because they are art – it seems as though few of them understand or wish to admit that. In the context of the Romain Jerome Spacecraft and Romain Jerome Spacecraft Black, I can see how someone might wear it because of the movement.

Yes, reading the time via the RJ2000-A movement is difficult. First, you need to look at the linear scale of hour markers pointing out to the side of the watch. An orange arm sits behind the current hour. Next, you need to look at a small window with a view of a disc on the top of the case that offers the minutes. It isn’t a terribly illegible experience, but it does make for a process that is much more complicated than you might hope for in a timepiece well-suited to “glance-ability.” Behind the design of the movement is the famed Jean-Marc Wiederrecht – who helped produce a module that sits on a base ETA 2892 automatic mechanical movement that allows for time to be read in this quirky manner. So the movement features the self-winding system of the base caliber as well as the unique construction of the exclusive module.

The design of the Romain Jerome Spacecraft case is thanks to another Swiss watch industry star – Mr. Eric Giroud. One of the best watch designers around today, Giroud applies his sense of refinement to otherwise highly original and often weird designs that make them work. If anything, Giroud is a master at making “strange” “acceptable.” I say this with love, because something like the concept of the Romain Jerome Spacecraft watch in the hands of a lesser design could have easily spelled instant disaster for the outcome.

Compared to the original Spacecraft the Romain Jerome Spacecraft Black also has a mostly titanium case, but here, more elements are PVD-coated black, making for an overall darker appearance. Romain Jerome dropped “Darth Vader” a few times when explaining the theme of the Black version of the Spacecraft. Looking like a small spaceship on the wrist, the case doesn’t actually look that large, being between 32.85mm and 44.5mm wide and 50mm long. All the crystals on the case are sapphire, and the case is water resistant to 30 meters. 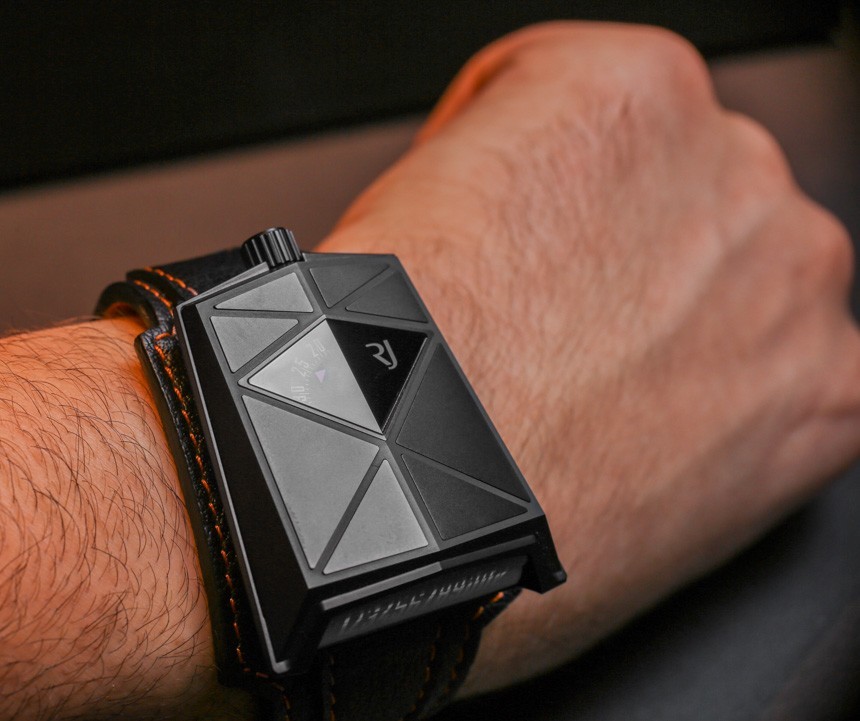