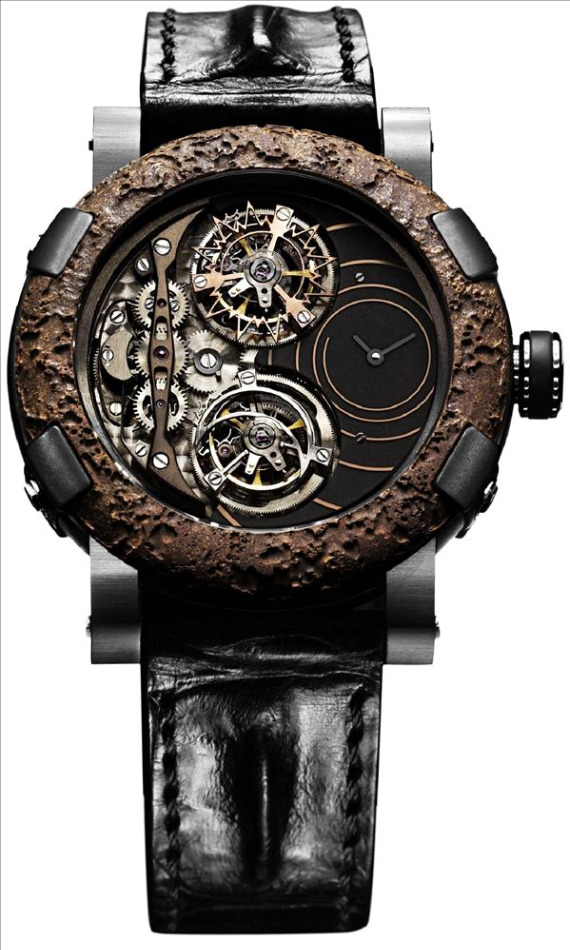 The controversial watch is back! Not too long ago Romain Jerome released the Titanic DNA Day & Night watch. It was the watch that didn’t tell the time. Instead, it had two tourbillon cages. One that spun during the AM hours, while the other spun during PM hours. That was the sole use of the watch. It looked really look, and collectors everywhere fascinated by the concept. Now, less than a year later the Romain Titanic DNA Day & Night watch 2 has been announced and will be unveiled at Basel. The best part of the new watch? It now tells the time.

The movement again is the RJ ONE made by BNB Concepts for Romain Jerome. The watch will be limited to only 9 pieces, and share the same traits as the original with some design tweaks. Notable is the more “aged” appearance and refined looks. The first Day & Night watch was a surprise hit, and it was actually one of Romain Jerome’s retailers that requested another Day & Night watch. Because the original was a limited edition, they would have to make a new model, and Romain Jerome did. The 46mm wide case is mainly constructed out of steel and titanium, with carbon fiber in the mix. The strap is a very high quality crocodile, which matches the demeanor of the watch that tried to be avant garde and retro at the same time.

Surely the 9 pieces will sell out quickly if people are even asking for the watch. Don’t forget, as is common with all Romain Jerome Titanic DNA watches, there is a bit of real Titanic ship metal in the case construction. Look out for this mechanical wonder at Basel soon. Prices are…well, for deep pockets only.