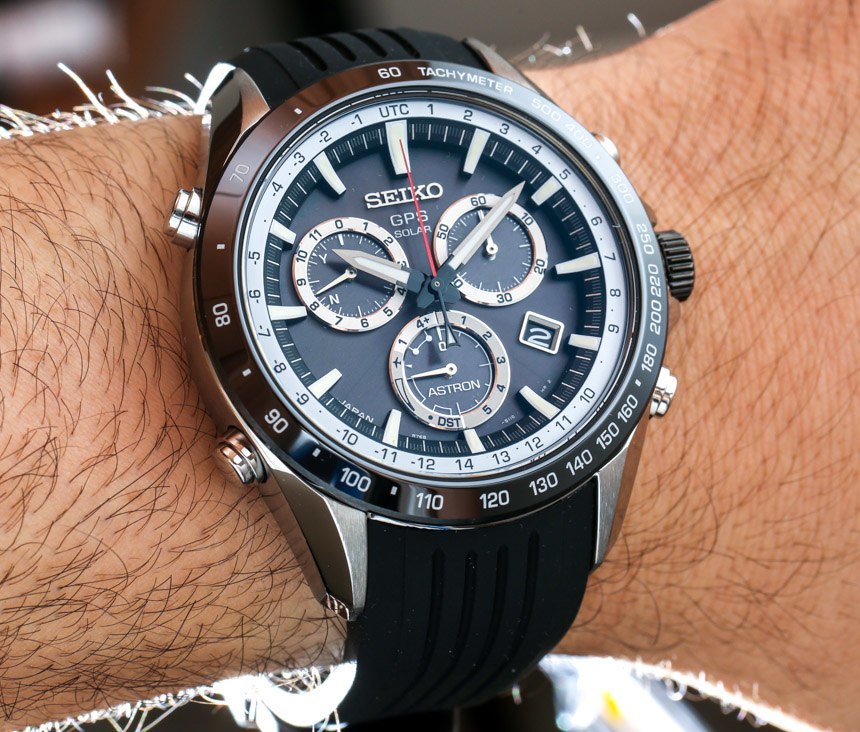 We are often exposed to the head-to-head competitions between Swiss watch brands, be they from the luxury or the mid- to lower-end segment. But there is another fierce race going on to win the hearts (and the savings!) of watch fans by major companies operating far-and-away from the Vallée de Joux. Among the latest great battles is the one between two Japanese mega-companies Seiko and Citizen, both investing heavily into the development of the world’s finest GPS controlled watches.

We discussed their “firsts” at the time of their debuts; both Citizen’s Satellite Wave and the Seiko Astron GPS Solar, and we were blown away by the state-of-the-art technology that these two giants have independently developed. At Baselworld 2014, Ariel went hands-on with Seiko’s latest and finest version of their top of the line GPS signal calibrated wristwatch, the Seiko Astron GPS Solar Chronograph, so let’s see what this new flagship line of watches has to offer. 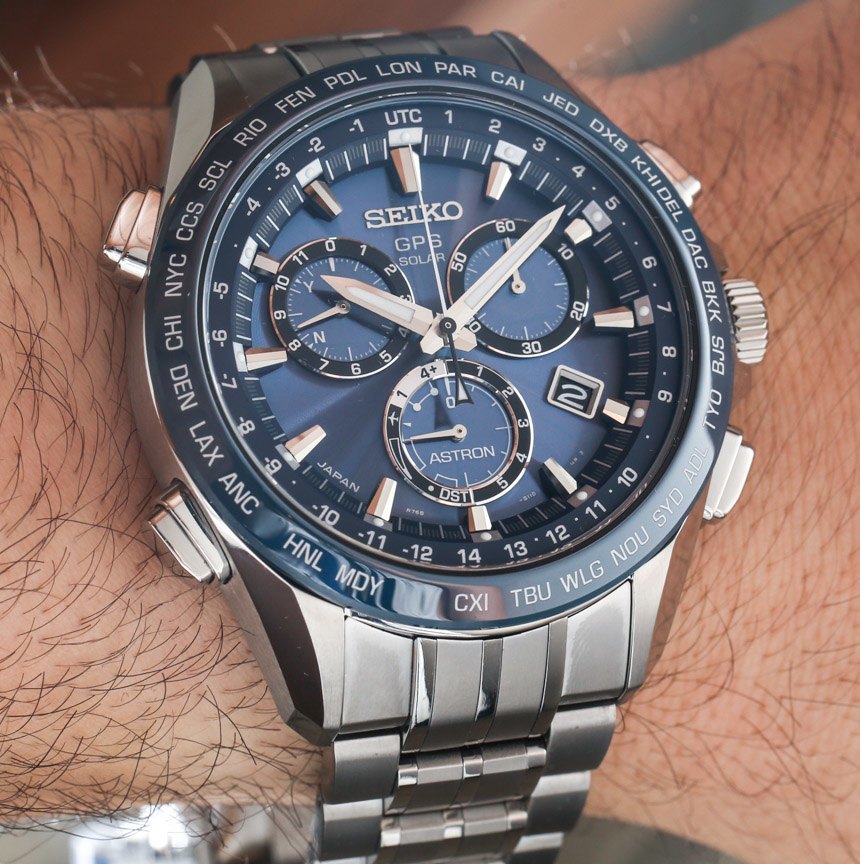 For those not yet fully acquainted with GPS signal receiving watches, let me briefly explain what all the fuss is about. High-end quartz watches of the past would receive radio signals from a handful of atomic clocks situated all over the world, adjusting themselves to the signal received from the nearest clock. Given that there are 40 different time zones of course meant that the wearer had to adjust the watch to the time zone of his momentary position while the signal from the atomic clock was to assure to-the-second accuracy.

With GPS watches like the Seiko Astron GPS Solar however, the watch automatically or on the wearer’s demand will connect to a number of satellites orbiting our planet some 12,000 miles above. It is through this global positioning system that the watch will “know” where it is in the world and hence will adjust itself to the correct time of its momentarily location. 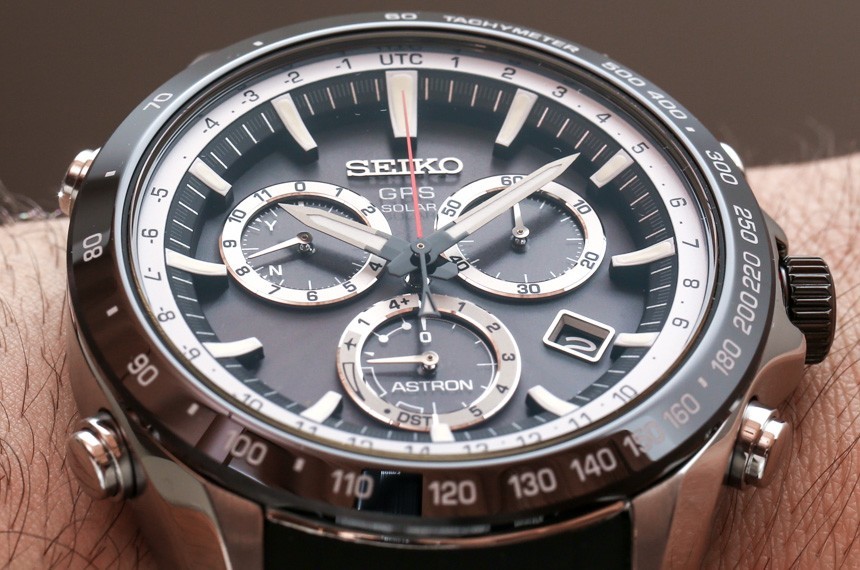 For 2014, Seiko redesigned its 7X52 caliber, the one with which the Seiko Astron Solar GPS debuted back in 2012. Now called the 8X82, it carries all trademark functions of the original while also offering some additional features, more than the subtle change in its name would imply. It is, of course, still charged by the solar panel in the dial and it still connects to the GPS network to tell the time with atomic clock precision. We should add that when the watch is not synced, Seiko claims the movement’s accuracy will fall in between +/- 15 seconds per month, a rate it can maintain between +5 and +35 degrees Celsius.

While the 8X82 still has the “one-touch” operation that allowed for a remarkably easy use of the GPS function, it now also incorporates a 6 hour chronograph, a decision which necessitated the use of a tri-compax dial layout. It will take some extended on-the-wrist time to judge how the new watches perform in terms of readability and wearing comfort on a day-to-day basis, but what we can already say is that despite this modification, the dials on the Seiko Astron retained their superb three-dimensional look and depth. Speaking of aesthetics, let’s see what else did Seiko manage to achieve during these two years since the Seiko Astron’s 2012 debut. 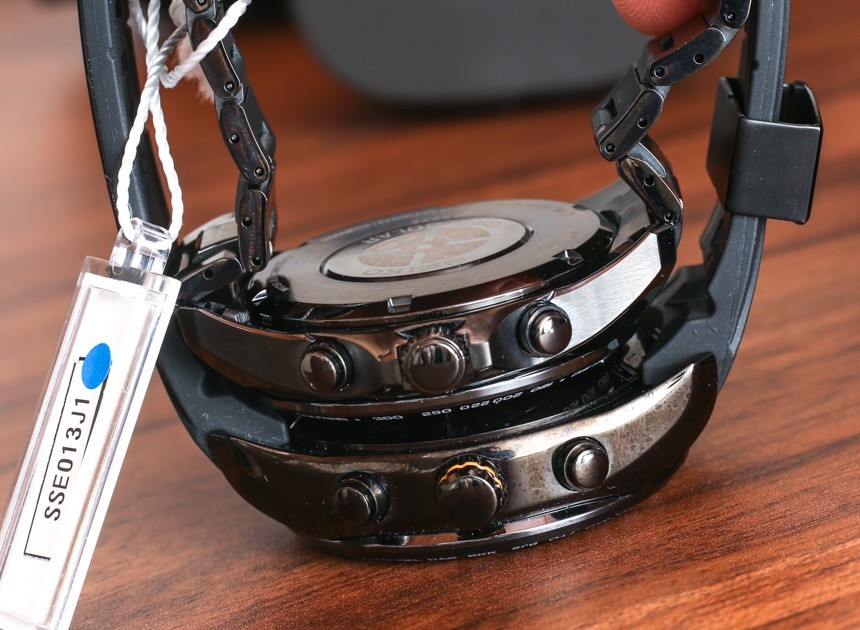 Looking at the image above you could say “That is a weird shot!” and we would agree, as you don’t see us picturing watches in such awkward positions. The reason why it’s here nonetheless, is that one of the most important advancements that the new caliber presents over its predecessor–beyond the inclusion of a chronograph–is that it is considerably smaller in both diameter and thickness. The end result is that while the original piece measured in at 47 millimeters in diameter and a rather hefty 16.5 in height, the Seiko Astron GPS Solar Chronograph is a more compact 44.6 by 13.3 millimeters.

Although that is still medium-to-large in size, it also makes the new model wearable for a much wider range of enthusiasts. That further proves that from Switzerland to Japan, major brands are starting to realize the end of the “oversize craze,” as although we are not seeing brands terminating too many of their beefed-up collections, many of them are starting to offer them in smaller sized alternatives along with the original ones. 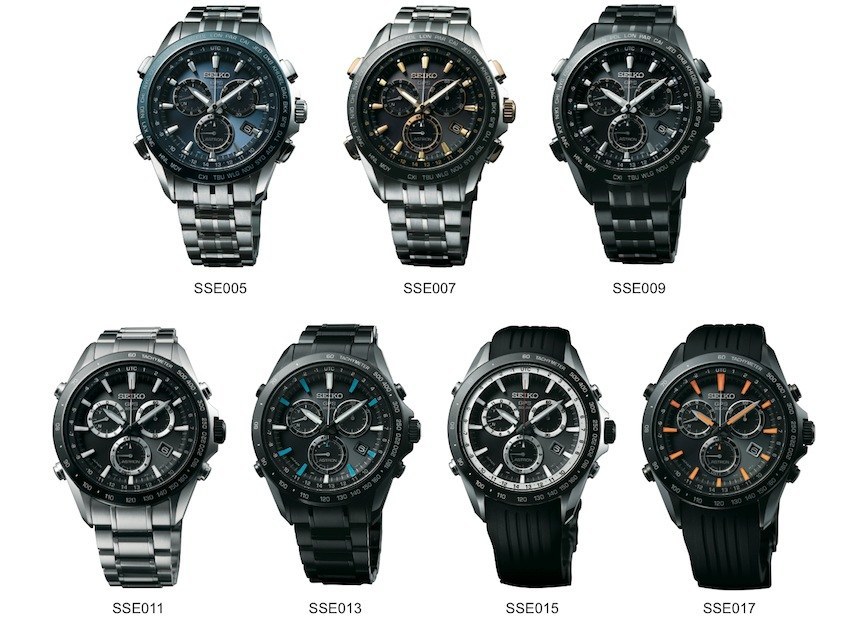 Seiko communicates that in parallel with producing this 2014 novelty collection they will also keep on offering the larger models–still equipped with the original 7X52 caliber. All in all this leaves us with two calibers, two sizes and a sum of 26 different models in the Astron line of watches. This year’s additions include eight regular production and one limited edition model: four variations in steel and four in titanium with super-hard coating, with the flagship limited edition of 7,000 numbered pieces also coming in titanium. 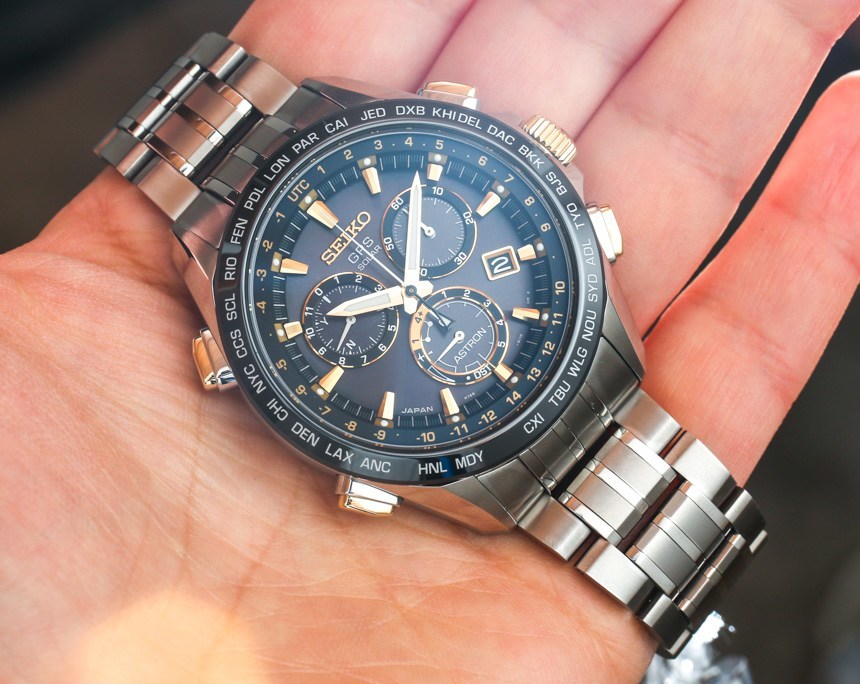 The four titanium and four stainless steel models will be offered either with what Seiko calls a super-hard coating (which does not affect the color of the base metal) or with “black hard coating,” completed by bracelets that match the case both in material and in color. Regardless of their case materials, all models will be equipped with ceramic bezels, something that should ensure they look as good as new, even years into their duty, and perhaps also justify the rather steep price of this high-end collection.

The limited edition SSE001 Seiko Astron GPS Solar Chronograph Watch will be priced at around $4,500, the non-limited models in titanium will be around $3,300 while their stainless steel alternatives are expected to be priced at $2,500, and all pieces will be available from September, 2014. seikowatches.com