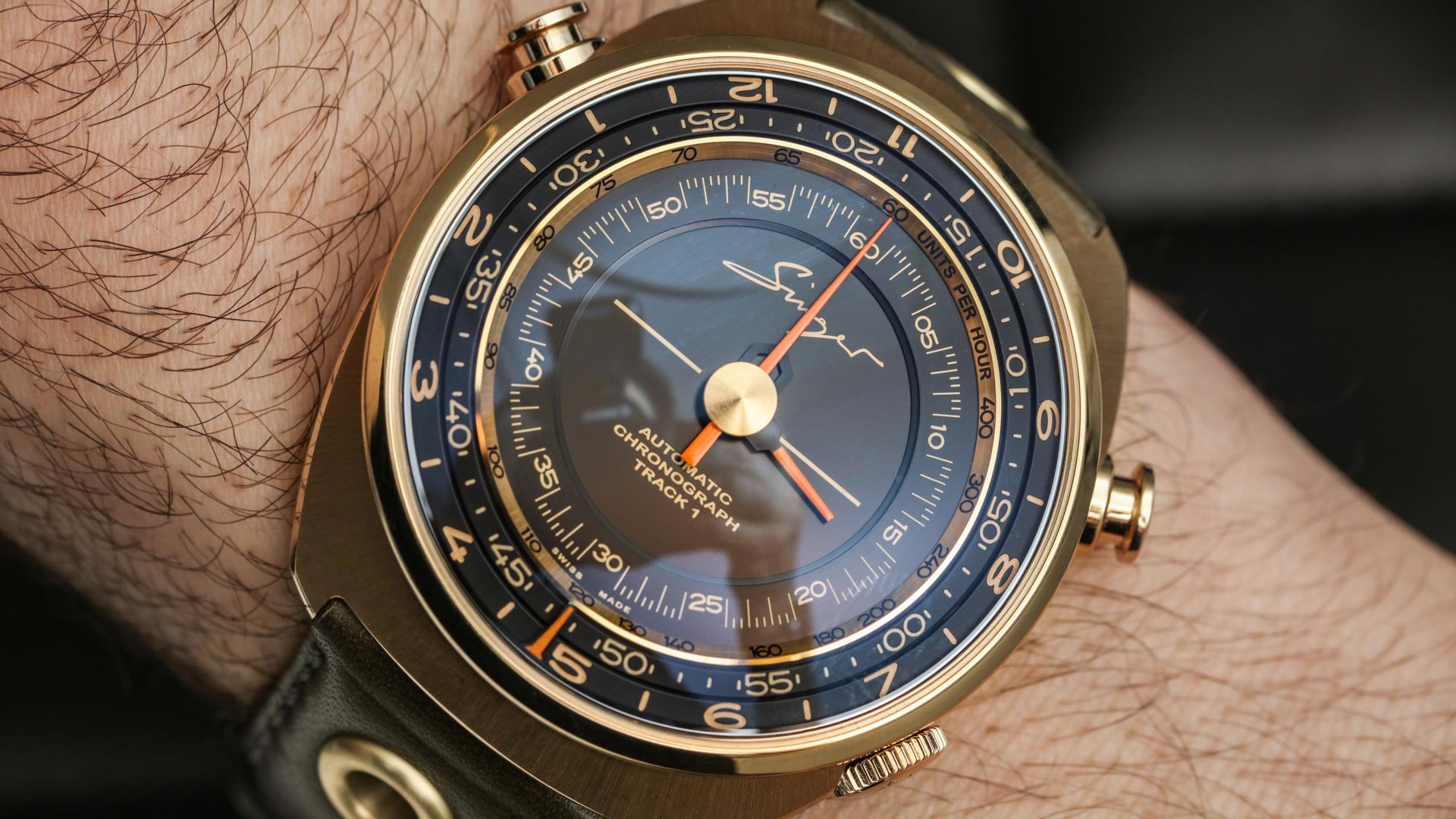 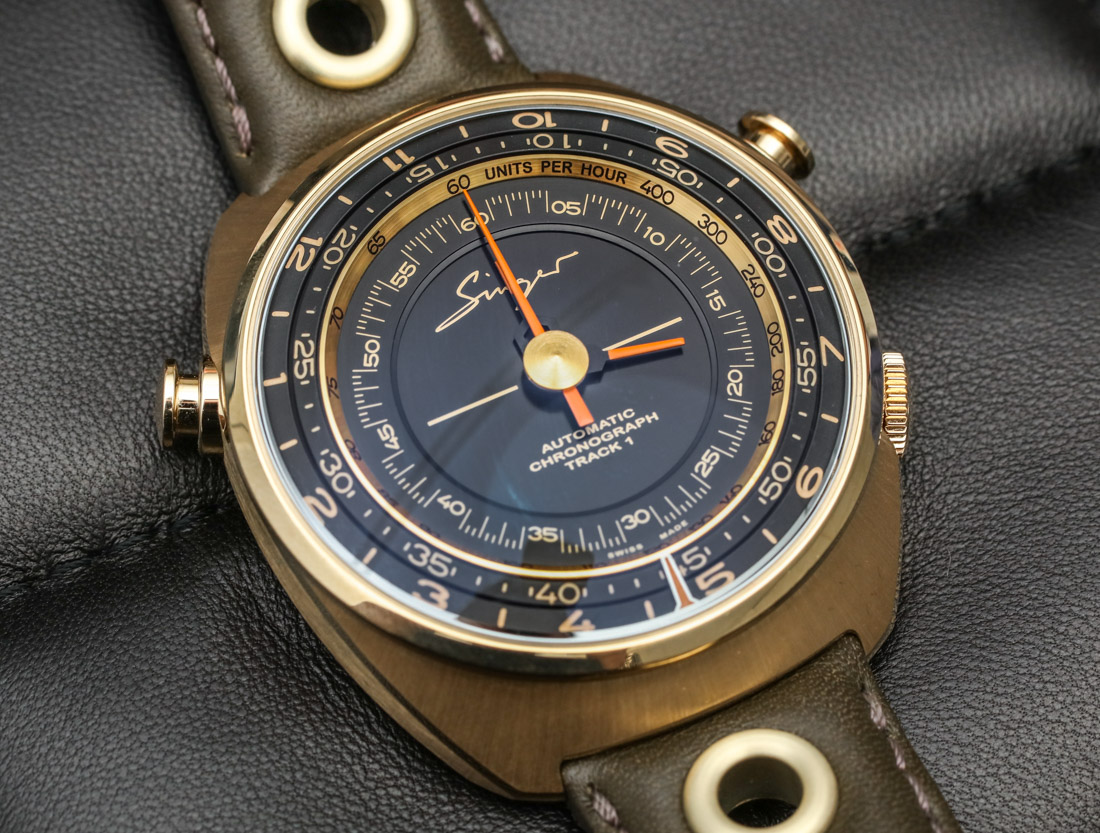 Almost exactly a year ago today, aBlogtoWatch debuted the new Singer Reimagined watch brand after I visited the famed Porsche automobile customizer in Los Angeles. Today we take a look at the second product offering from the Singer Reimagined brand, which is the Singer Track 1 Geneva Edition. Of course I needed to travel all the way to Geneva in order to see the Geneva Edition, which is one of four watches Singer promises to release per year for the next two years. That means there will eventually be between eight and nine variations on this very interesting vintage motorsports-theme chronograph watch that is produced in Geneva with a movement by Agenhor (a prestigious and highly-regarded mechanical movement maker and design company). 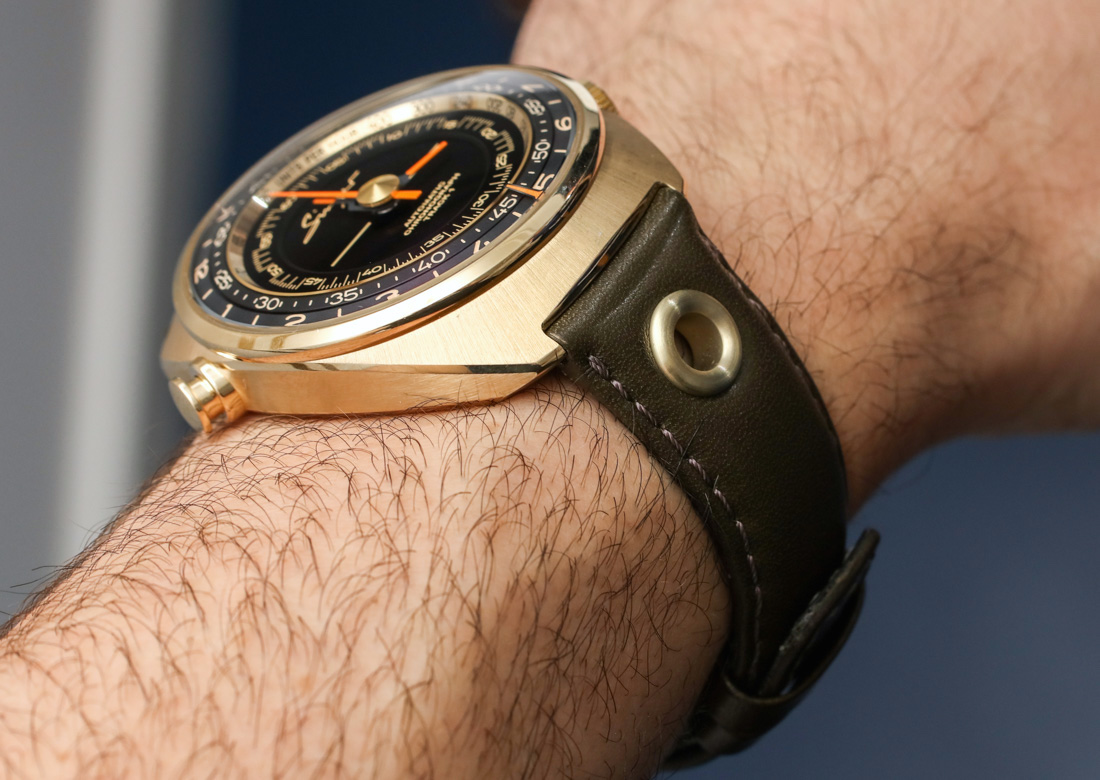 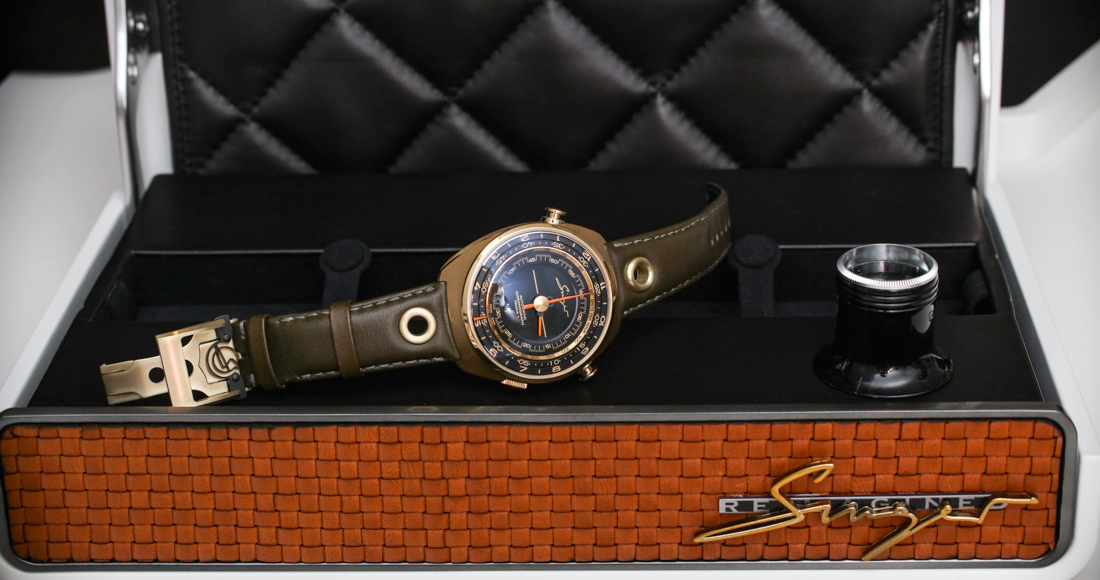 The Singer Track 1 Geneva Edition presents a slightly redesigned dial as well as a new case material which is a very attractive variant of 18k yellow gold known as 1N gold. It is a bit more pale than most yellow gold alloys and I think it is gorgeous when mixed with the deep gray colors of the dial and the light orange accents. Singer did a lovely job changing the inner part of the watch’s dial, which is where the central chronograph is. If you recall from our debut article on the Singer Track 1, you’ll remember that the entire “point” of the watch is to offer a mechanical chronograph with that complication being very easy to read. The result is a central chronograph second, minutes, and hours mechanism where the time is actually indicated via two large rotating rings. Time is read at the orange baton marker located at 6 o’clock on the dial. 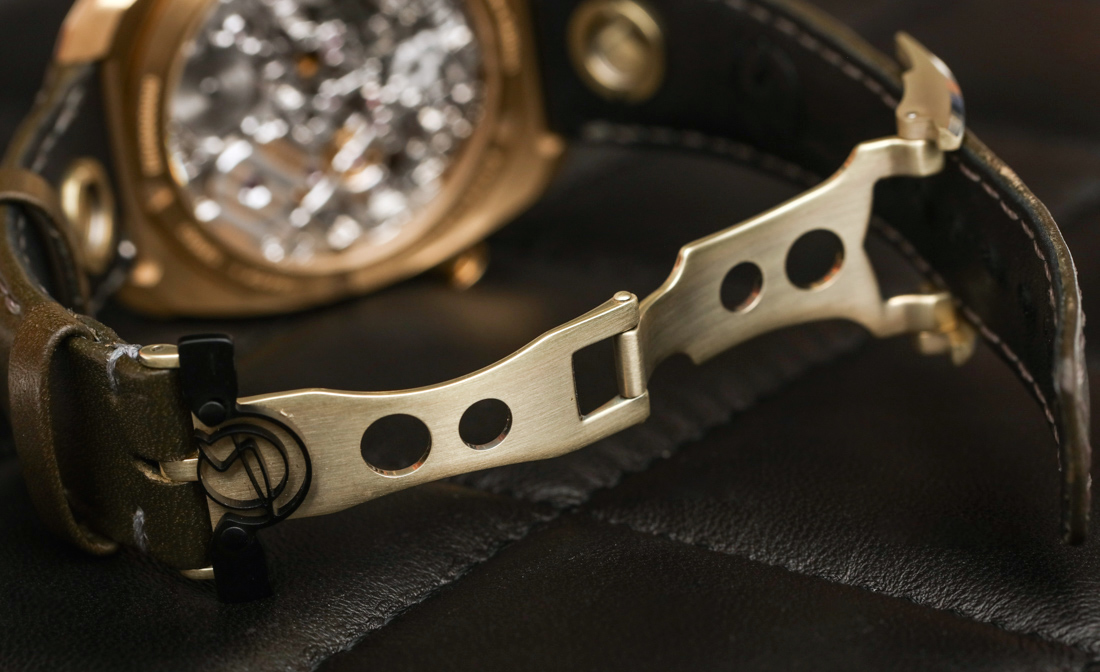 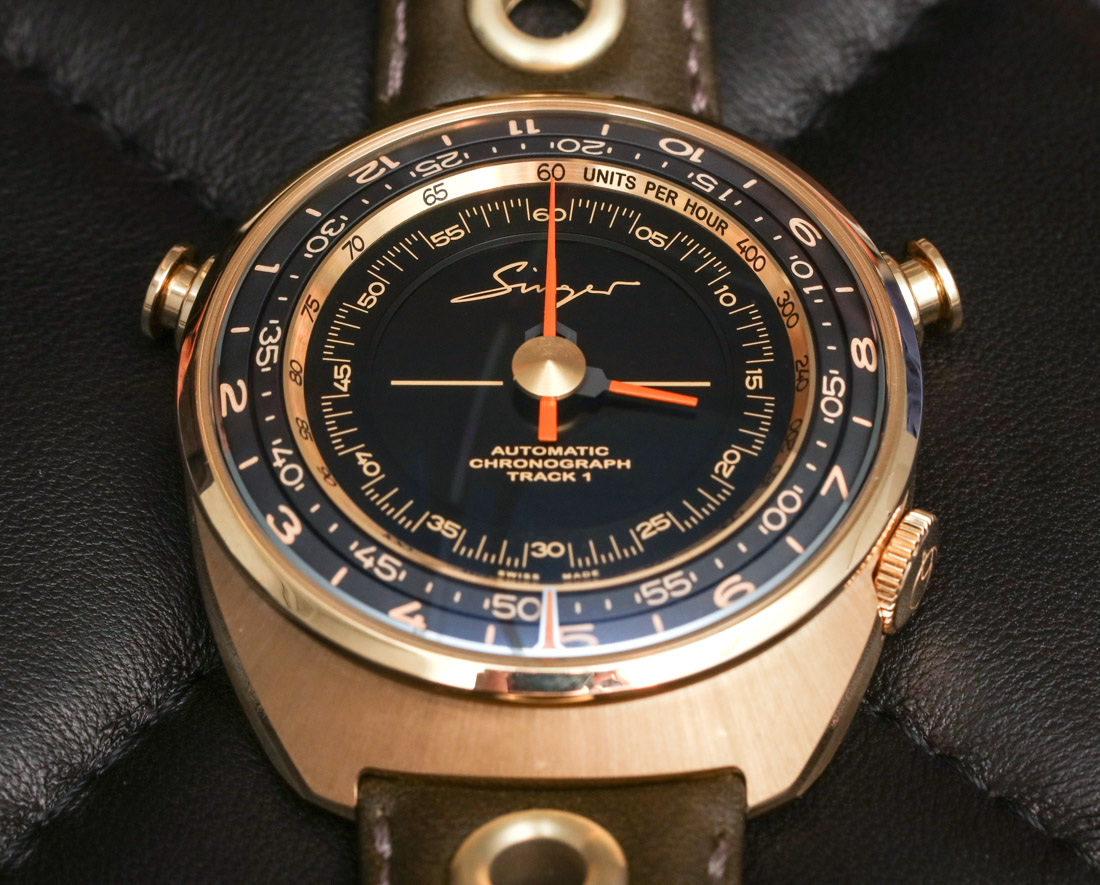 This is an expensive (although arguably fairly-priced) watch because it is authentically exclusive, being produced in very small numbers with all custom parts. This goes from the case and dial to the movement and strap. Singer’s main work is taking older Porsche cars (mainly 911s) and making them “better than new.” They produce high-performance “fantasy” versions of the original cars for specialized collectors willing to pay top-dollar for one of the coolest sports car “toys” around. It is more than fitting for these customers to have something as original on their wrist to complete the experience. It’s certainly not a wristwatch for mainstream consumption, but it was never meant to be. 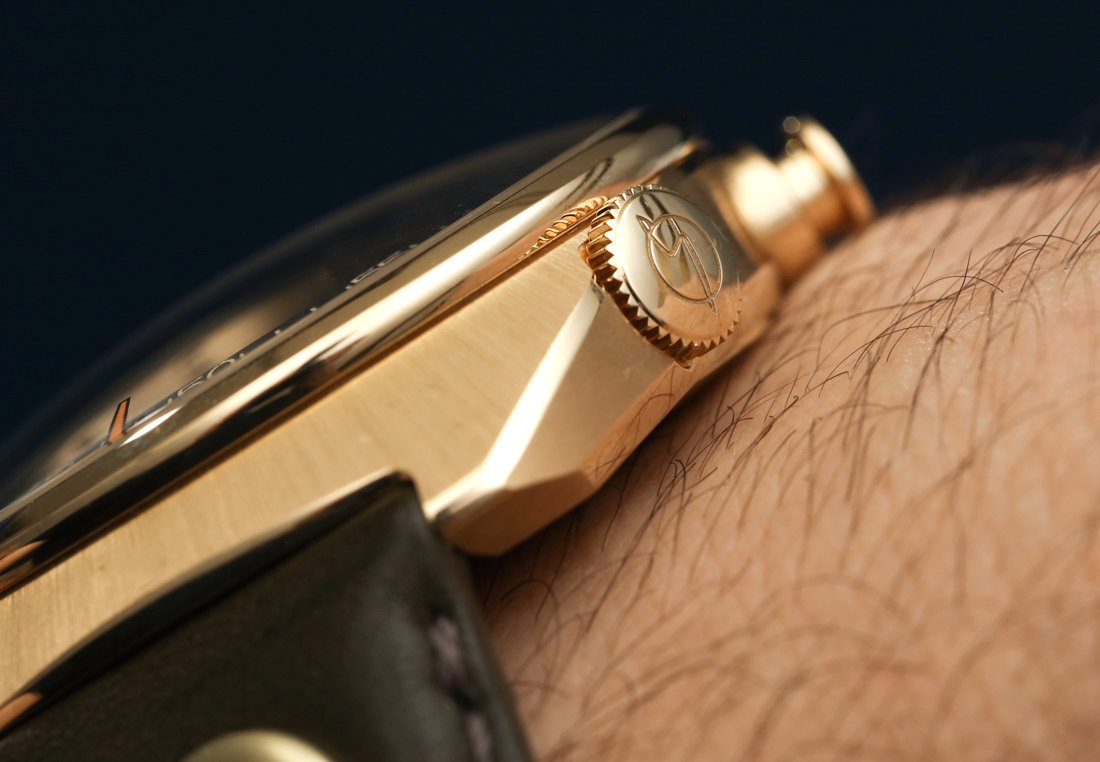 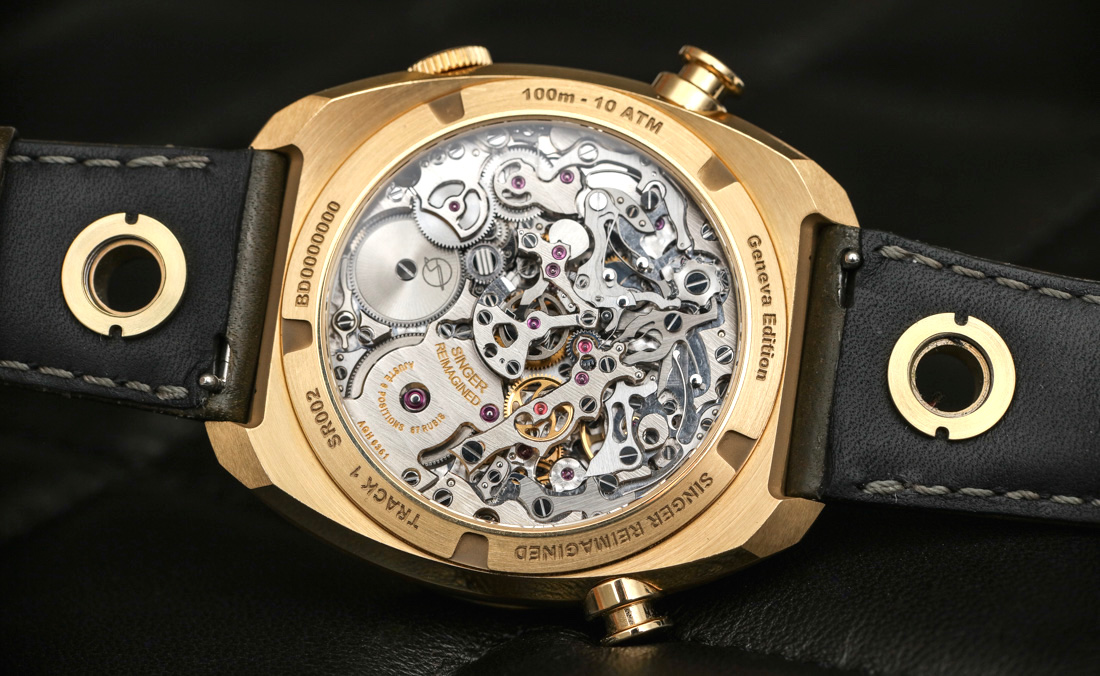 Drive that air-cooled Porsche around a track and you’ll be thoroughly enjoying the “analog” experience that such an automobile can afford. Having a similar “analog” stopwatch experience on your wrist in the form of a mechanical chronograph simply adds to the experience. Sure there is an entire universe of other chronograph timepieces available, but the Singer Track 1 wanted to make sure that no other chronograph operates quite like it. True to the brand’s promise, operating and reading the chronograph with this particular layout is very ergonomic and legible. Singer Reimagined also did a fine job in connecting with the Singer brand experience in that the Track 1 certainly feels like a “better than the original timepiece.” What I mean by that is the watch is designed to look as though it was born in an era such as the early 1970s, but is from a quality and complexity standpoint, something entirely different from the watches that helped inspired its design. 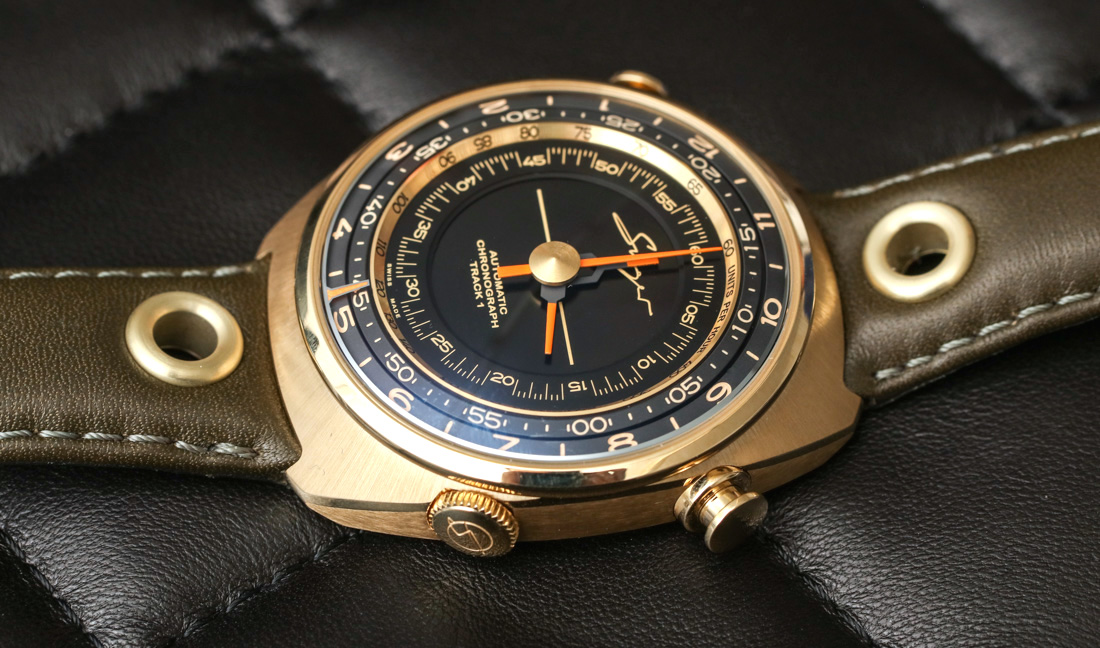 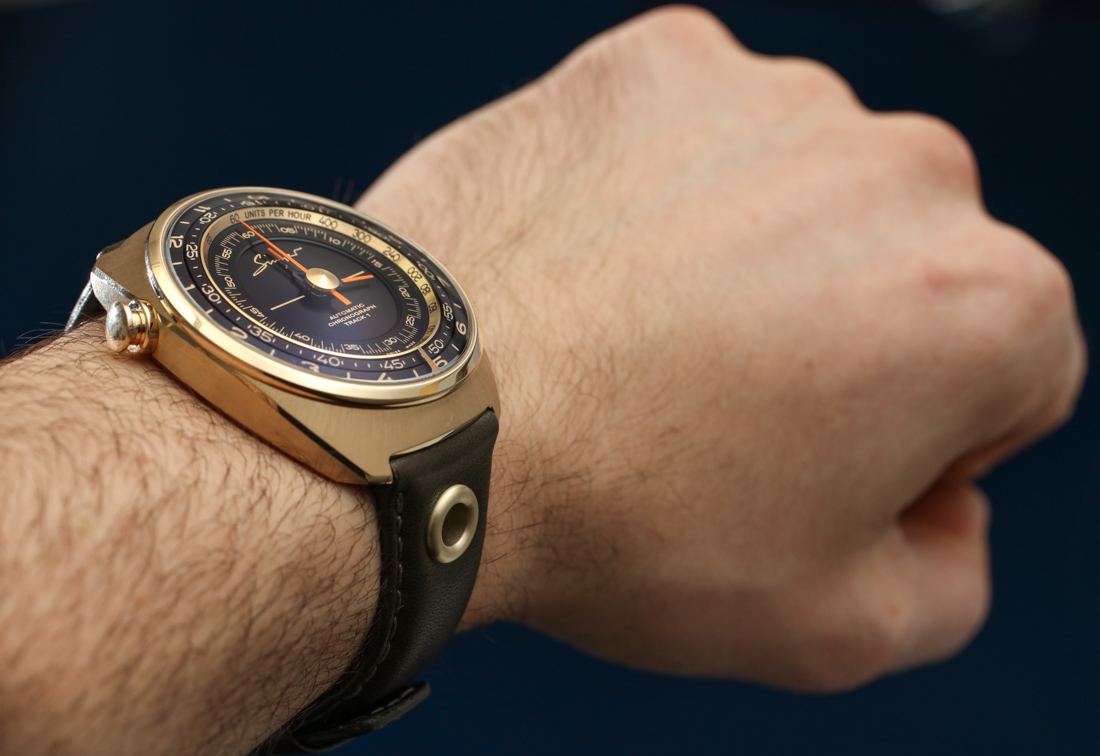 The chunky tonneau-shaped case is very wearable, 42mm wide, and 15mm thick (water-resistant to an impressive 100m). The round dial is expansive and while not as legible (chronograph-wise) as the original titanium Track 1, the center of the dial is more attractive. The depth of the dial helps lend an even more high-end look and overall use of colors and materials is well-done. Reading the time is still a function of looking at the bottom of the case and seeing what parts of the hour and minute rings are touching the orange baton. 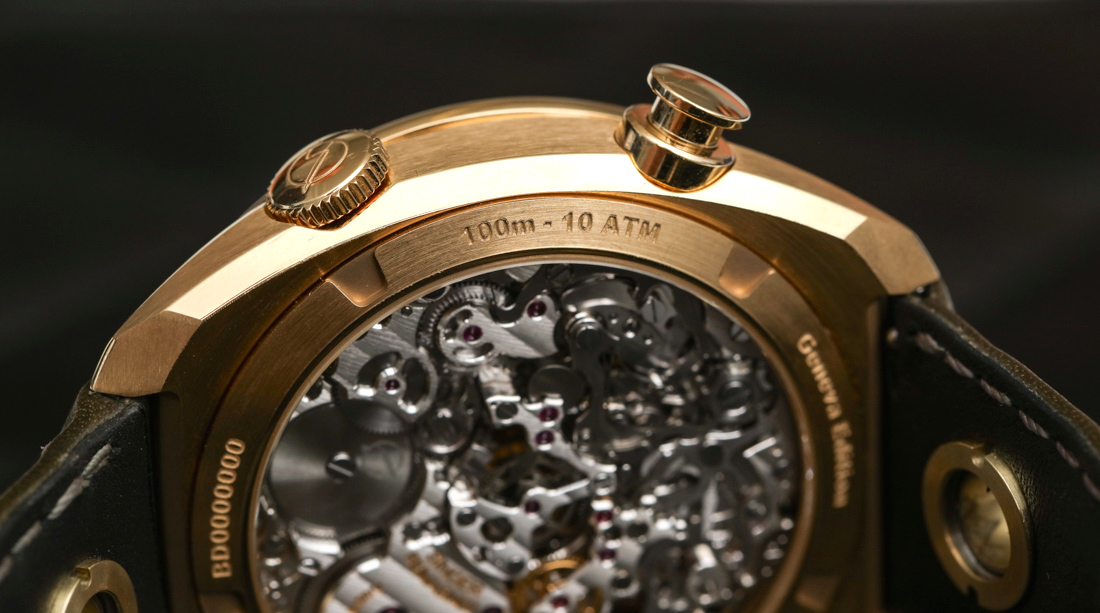 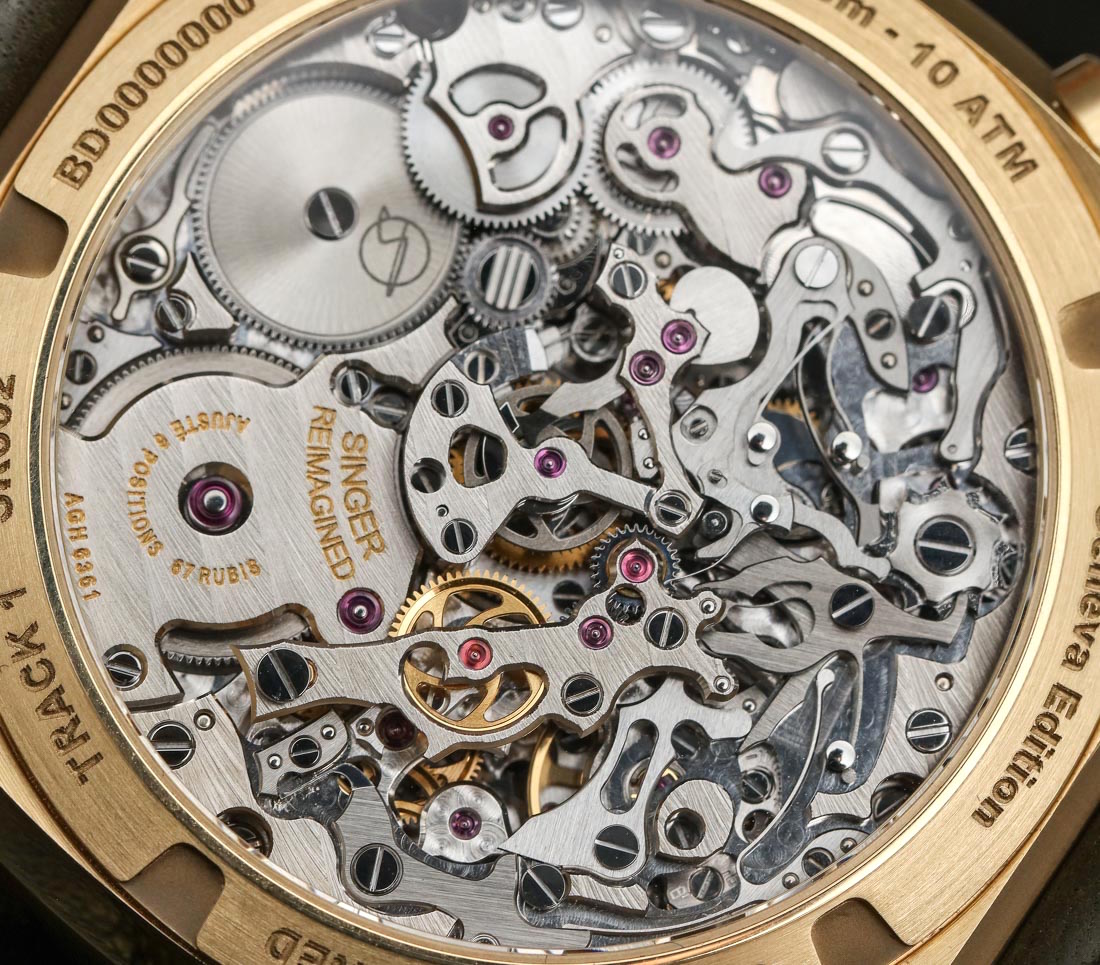 The movement inside of the watch was designed to have the chronograph pushers on opposing sides of the case as opposed to being on the same side. The pushers are easy to press and nice to operate. A crown to wind the movement (it is an automatic) if desired or adjust the time is located at the 4 o’clock position on the case. For this Geneva Edition version of the Track 1, Singer was able to equip its new strap which is meant to echo the seat leather of some Porsche 911 cars. Straps like this can be customized per the whims of the customer, if I recall correctly. 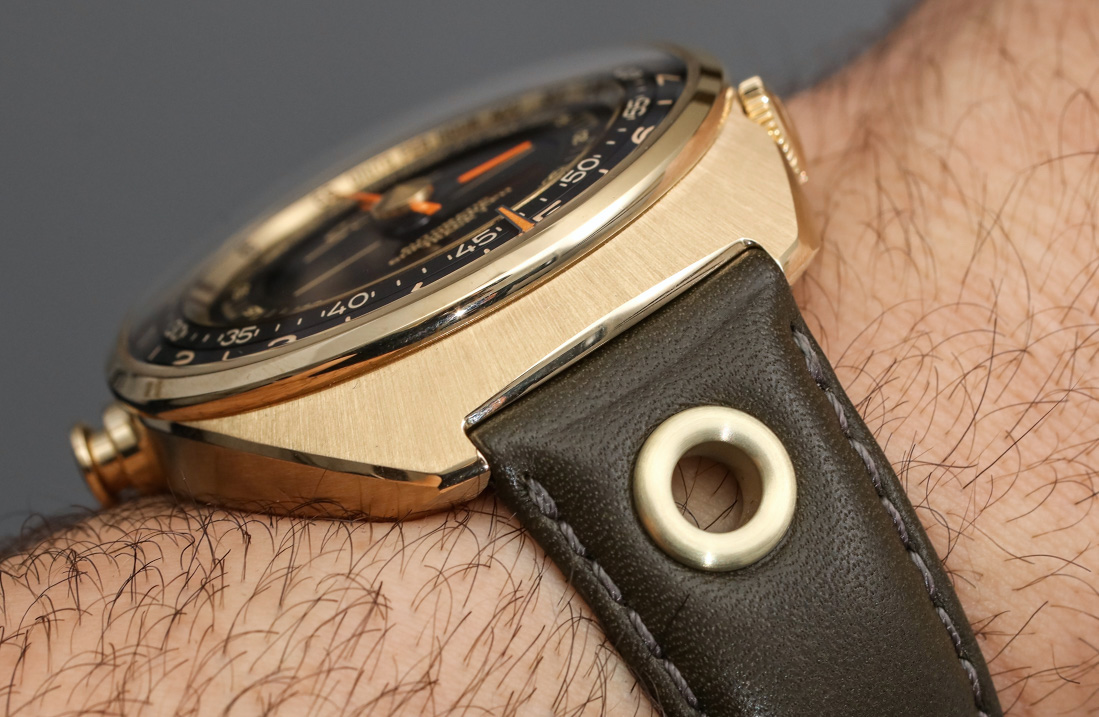 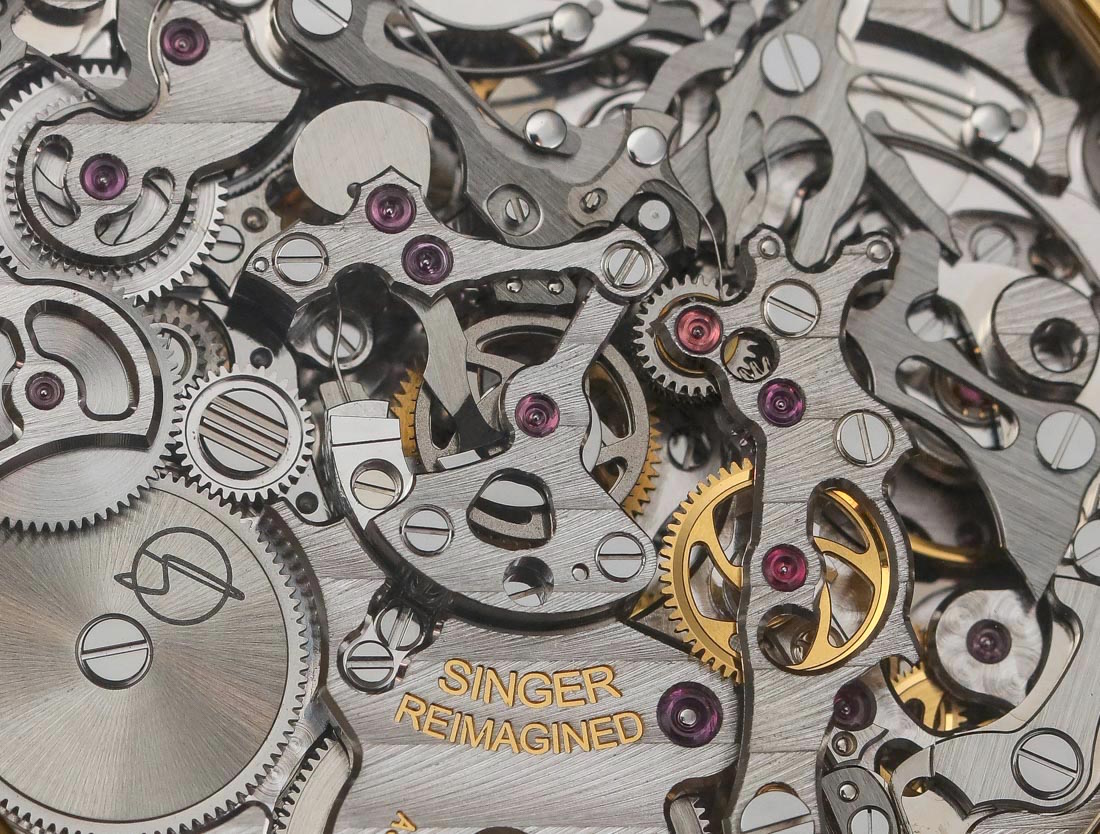 The movement inside of the Singer Track 1 Geneva Edition is what the horology enthusiasts will get all excited about. Singer was smart to produce a watch that would appeal to a niche base of customized Porsche automobile owners – but that would be approved by wristwatch aficionados. The movement (which is produced and assembled in Geneva, Switzerland) is known as the caliber 6361. It is an automatic movement with a hidden peripheral rotor operating at 3Hz (21,600 bph) with a power reserve of 60 hours. 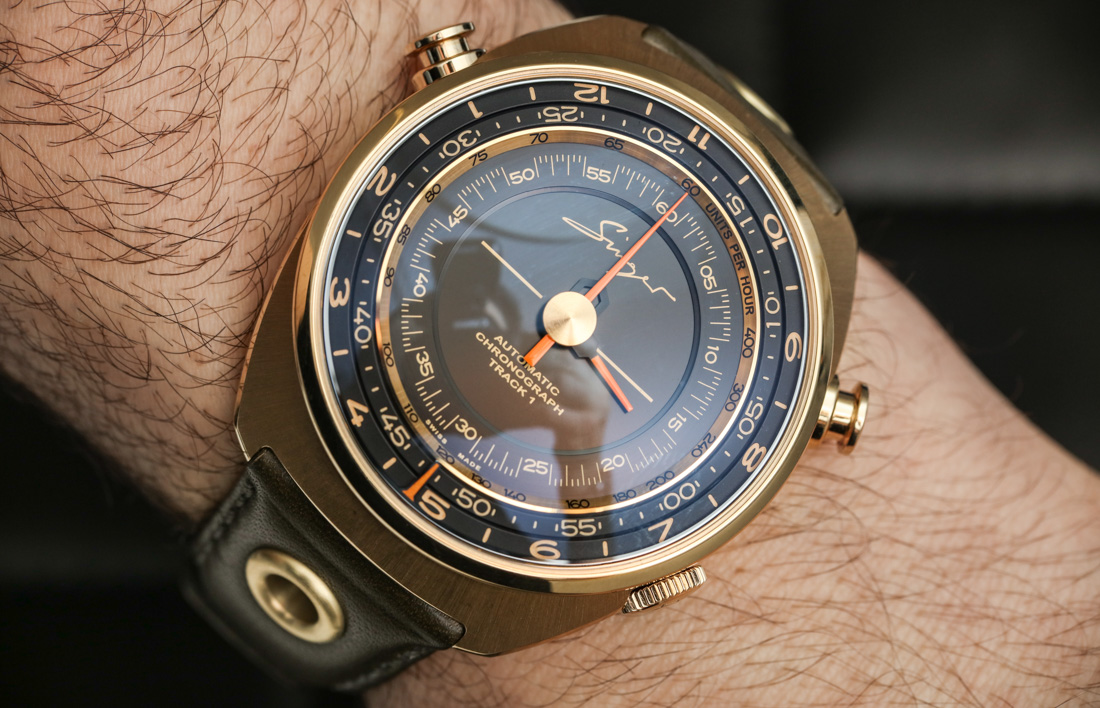 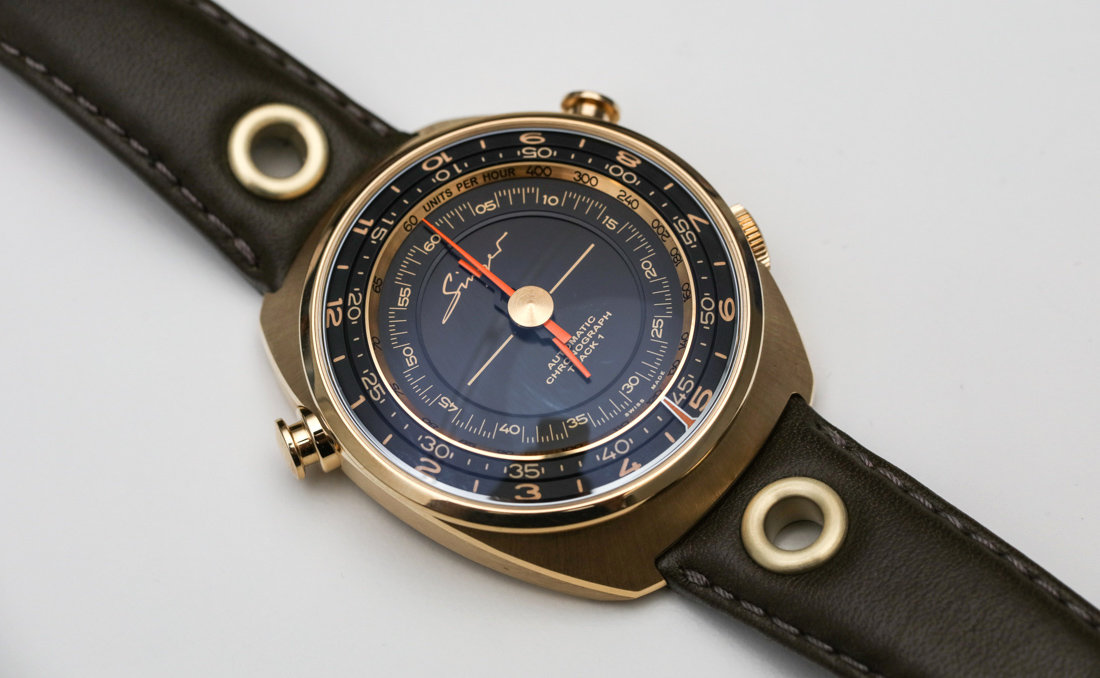 The chronograph complication features jumping hours and jumping minutes along with a sweep seconds hand in order to allow for precise chronograph measurements of elapsed time. It is a very complicated movement being produced from a total of 477 parts and is of course visible through the rear of the case. Agenhor knows how to make a movement that is intelligent in its functionality as well as attractive to the eye. The better value-proposition is of course the titanium version of the Singer Track 1 watch, but in 1N yellow gold the movement, case, and dial work together so well on the Geneva Edition of the watch. It isn’t a limited edition, but production will be very slim. Price for the Singer Reimagined Track 1 Geneva Edition watch is 72,000 CHF. singerreimagined.com