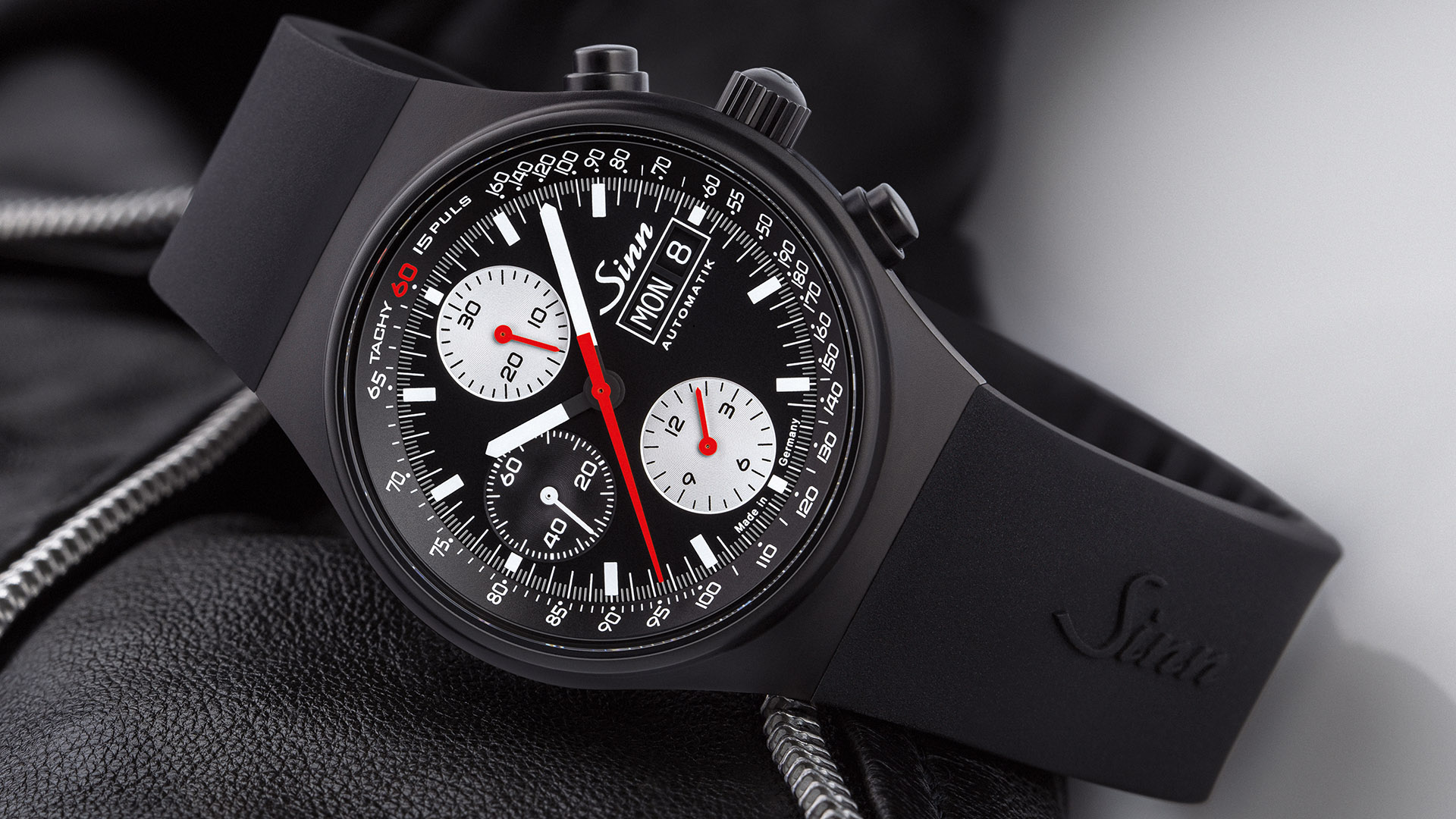 The ‘70s were a pivotal decade for sports chronographs. Automatic movements became standard equipment across nearly the entire segment, while design concepts like tonneau cases, hooded lugs, and black case coatings made for a far more vibrant and visually diverse field than previous decades. As part of its ongoing 60th-anniversary celebrations in 2021, German tool watch specialist Sinn is delivering a new limited edition variant of its long-running 144 chronograph series, embracing many of the design cues that defined the 1974 original. The new limited edition Sinn 144 St S Anniversary II brings together a bold ‘70s sporting look and the brand’s durable modern innovations for a truly best-of-both-worlds experience.

The 41mm stainless steel hooded lug case of the Sinn 144 St S Anniversary II has been a hallmark of the line since its inception, with clean and utilitarian surfacing emphasized by a uniform bead blasted finish. In a nod to the original 144, the case of this new model is coated in black, but the modern Black Hard Coating should prove far more resistant than the black chrome plating of the original. The full case has also been hardened with the brand’s TEGIMENT technology for additional scratch resistance, and Sinn claims to have also integrated air de-humidifying technology into the case to prevent fogging in extreme high-humidity environments (no details on how this technology works, sadly). Other modern amenities include a sapphire display caseback and a robust 200-meter water resistance. 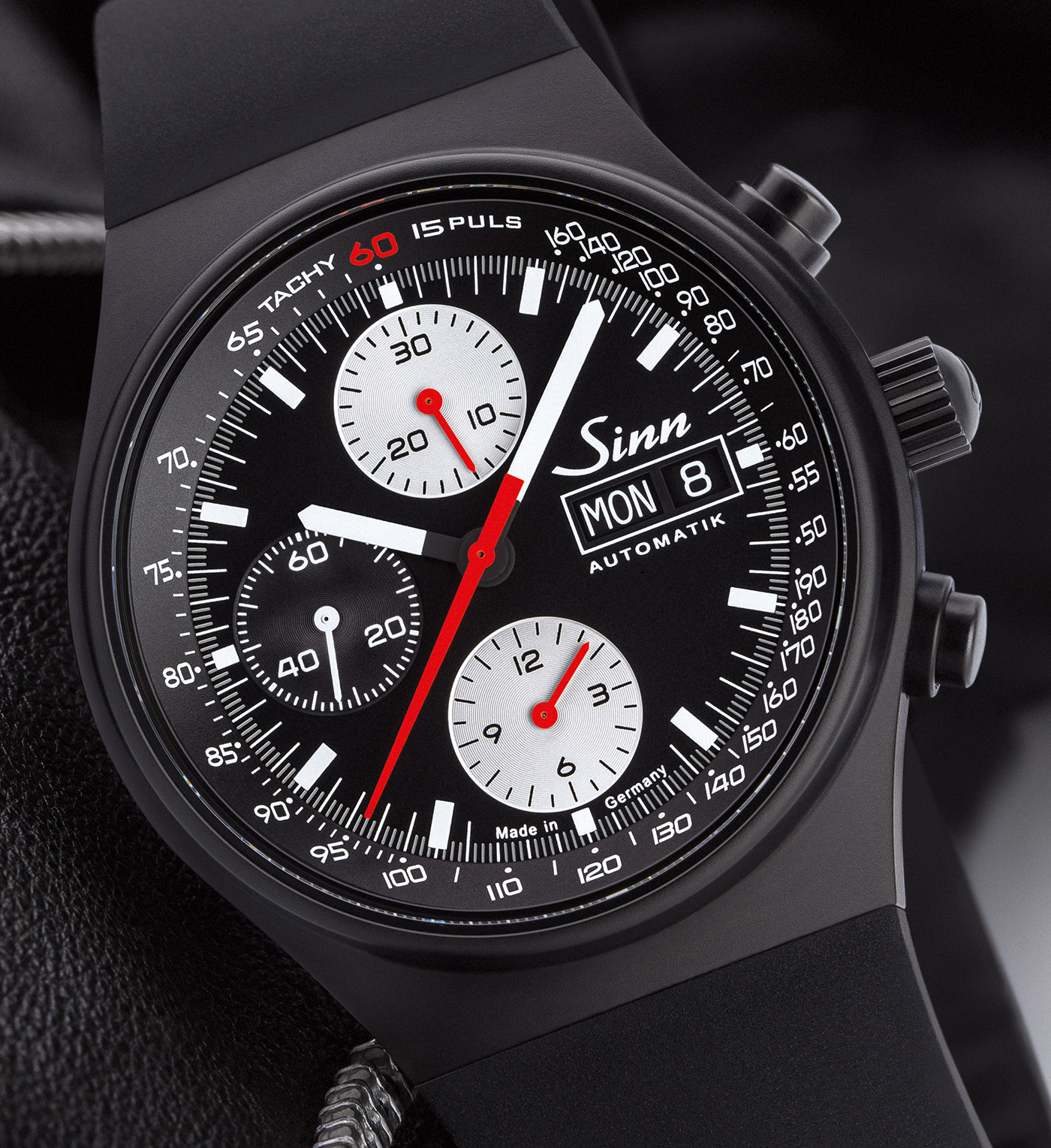 Sinn adds a touch of vibrant flair to the tool-oriented dial of the 144 series with the 144 St S Anniversary II. While the sporty 70’s formula of a matte black dial, a tall sloping tachymeter/pulsometer ring, and subdials at 6 o’clock, 9 o’clock, and 12 o’clock remains intact, Sinn sets this one apart with the use of accent colors. The chronograph subdials at 12 o’clock and 6 o’clock are finished in contrasting white for a stark reverse panda look, and given a touch of light play thanks to subtle azurage surfacing. The use of bold fire engine red for the chronograph hands sets this apart from the orange-accented standard line at a glance, while Sinn smoothly adds a celebratory 60th-anniversary touch by painting the tachymeter’s “60” marking in contrasting red as well. Although this slightly more ornamental approach does diverge somewhat from the strictly functional philosophy of the 144 line, the design still looks eminently legible in initial images. 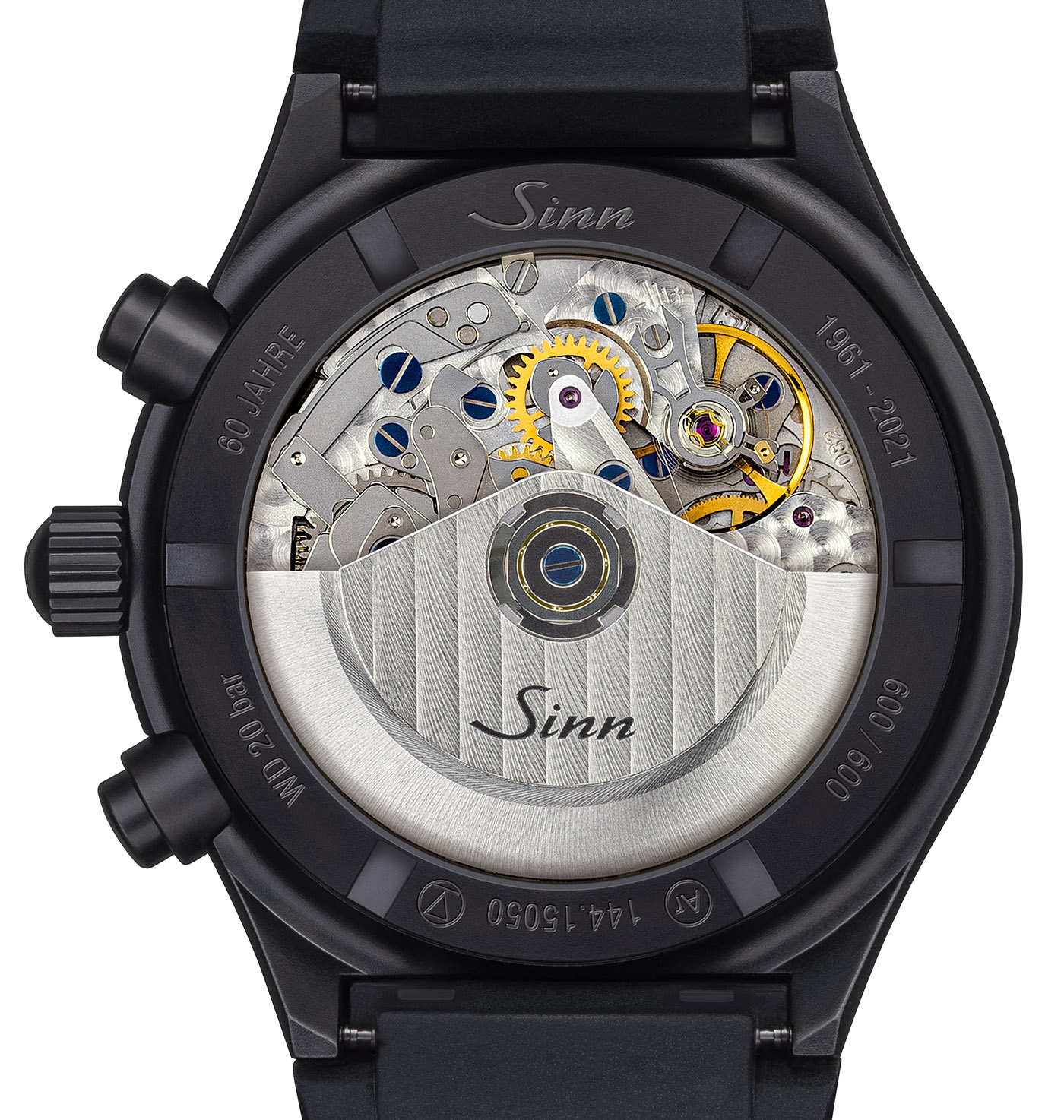 Sinn equips the 144 St S Anniversary II with the Valjoux 7750 based Concepto C99001 automatic chronograph movement. The Concepto 99001 features surprisingly ornate decoration for a tool-oriented brand, but the mix of striping and perlage across the bridges, blued screws, and a striped rotor are handsome touches. Sinn provides few details about the exact performance of the Concepto C99001, but the power reserve is likely close to 48 hours at a 28,800 bph beat rate. 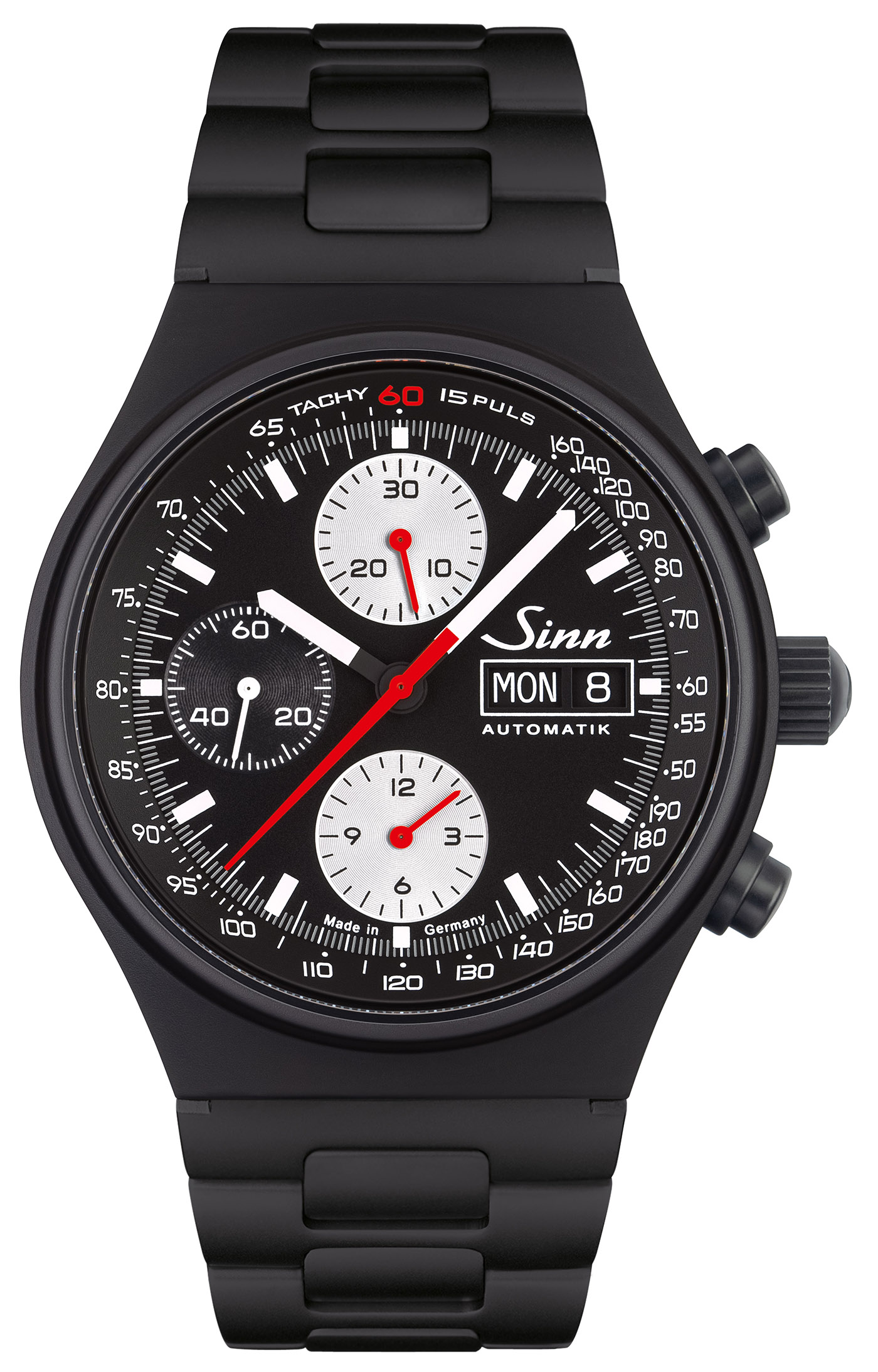 The Sinn 144 St S Anniversary II is packaged with a pair of strap options that emphasize both the vintage and modern sides of the watch’s character. For traditionalists, Sinn includes a Black Hard Coating variant of its soft and rounded stainless steel H-link bracelet. This H-link design is a Sinn standby across several of its model lines, and its tapering execution here flows smoothly into the lines of the case for a handsome and unified look. Sinn also includes a more modern option, injecting a more contemporary look into the design with a minimalist signed strap in black rubber. 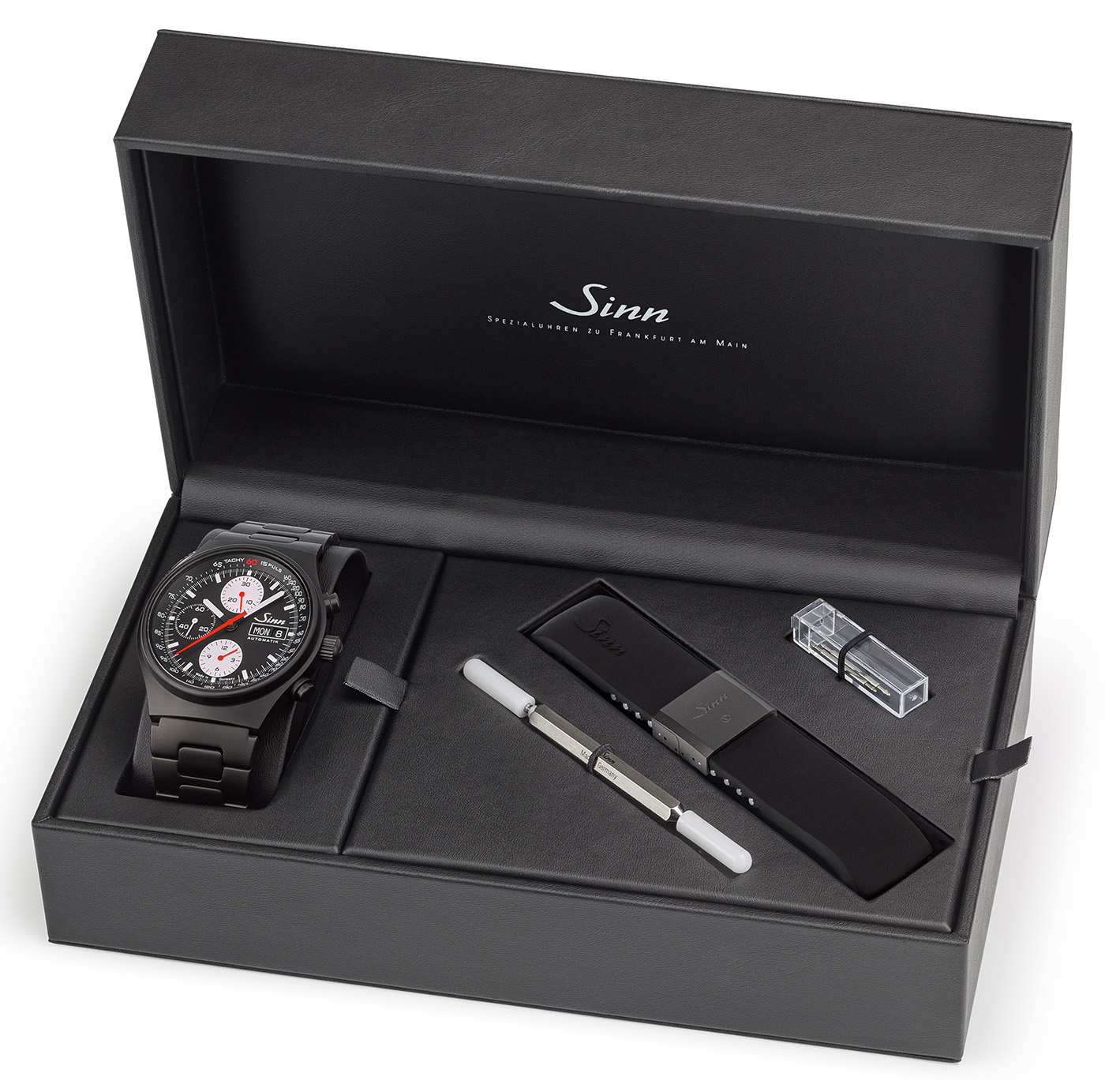 With a design that celebrates the brand’s ‘70s heritage and showcases its durable modern techniques, the limited-edition Sinn 144 St S Anniversary II is a tough and stylish alternate take on one of the marque’s most enduring series. Sinn will only produce 600 examples of the 144 St S Anniversary II, available now through authorized dealers at an MSRP of $3,470. For more details, please visit the brand’s website.