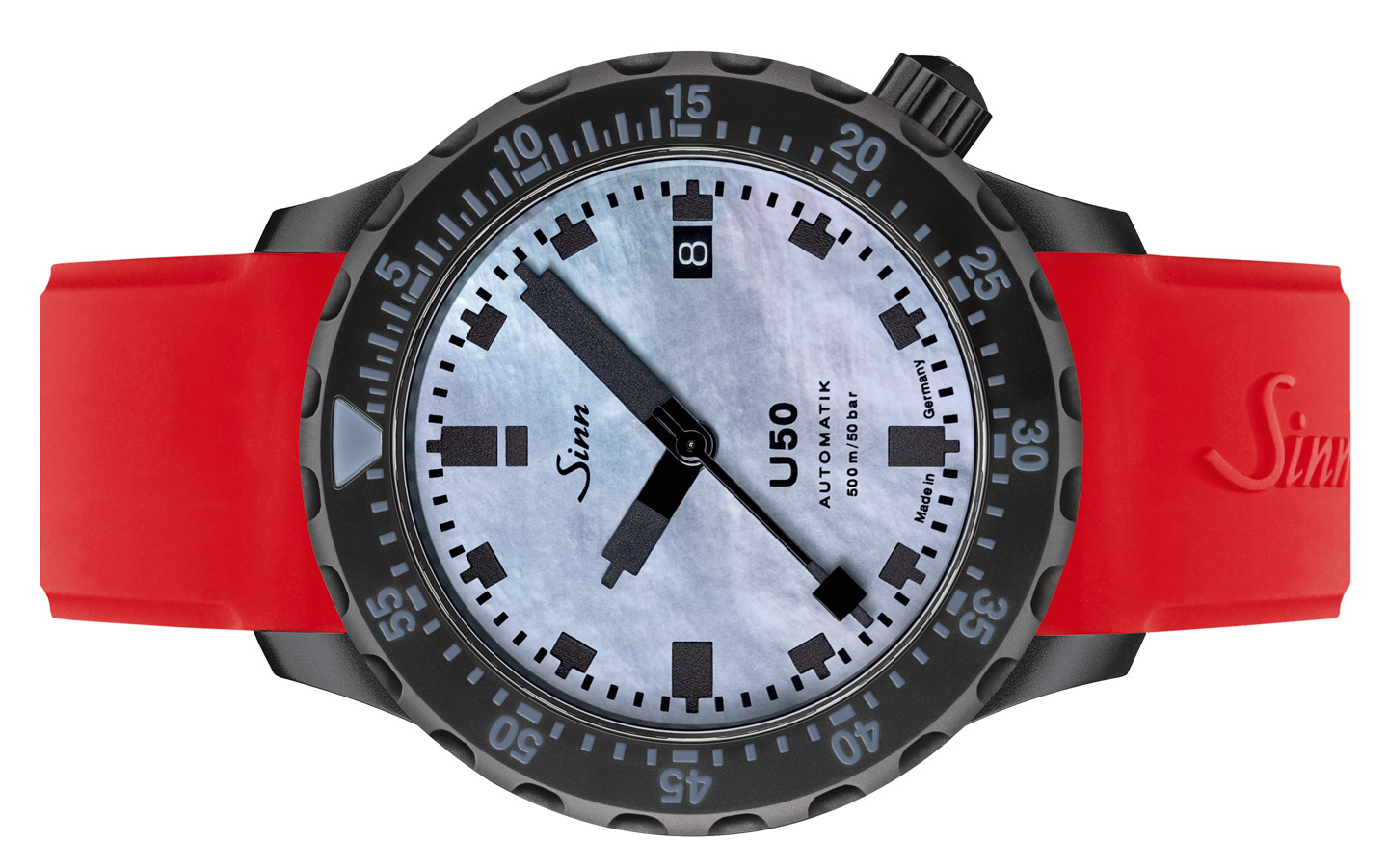 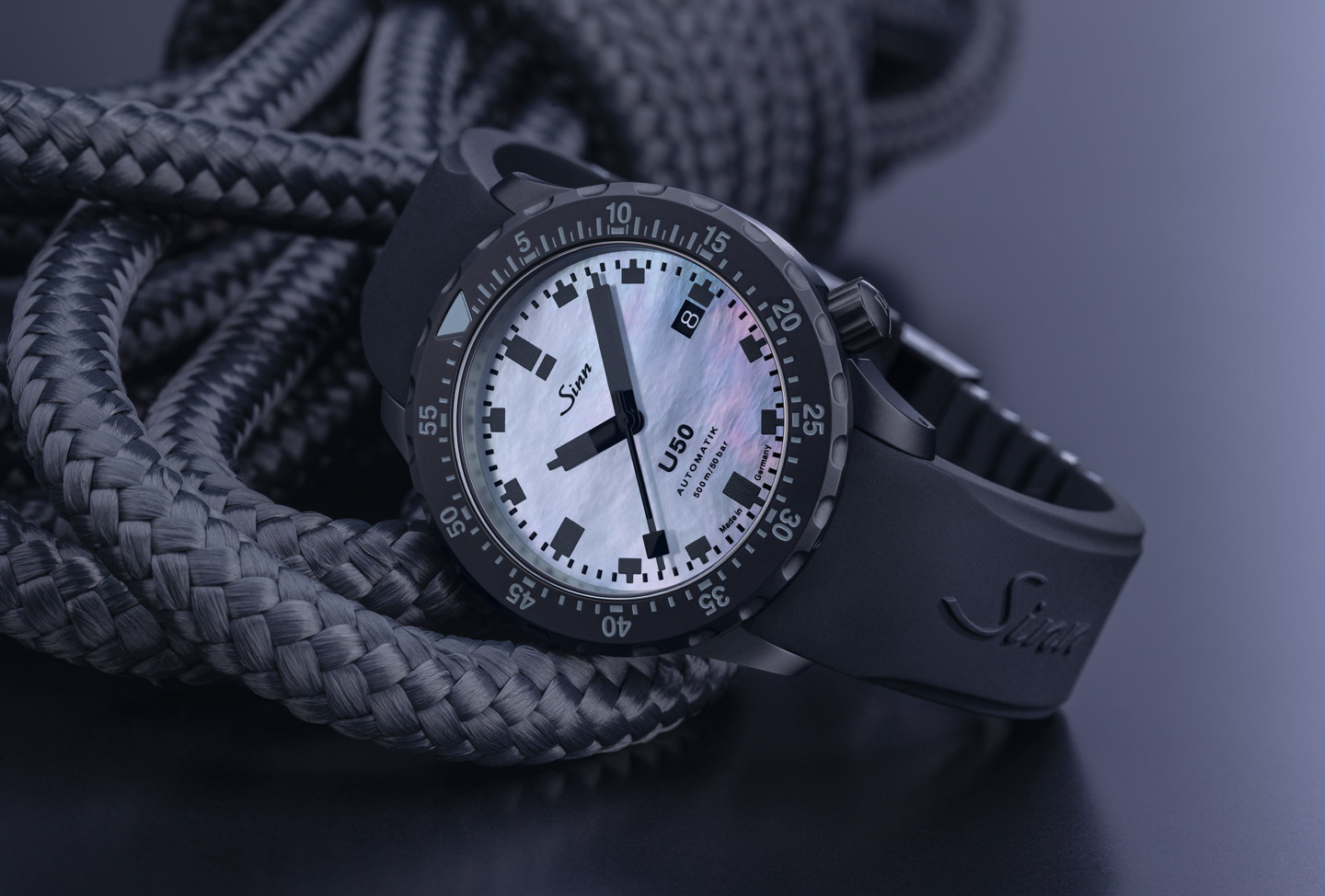 German tool watchmaker Sinn has been releasing increasingly fashionable products over the last few years — which, for many fans, present interesting alternatives to its core personality of strict tool watches. Sinn’s more fashion-forward timepieces are always built on tool watches, with part of the value proposition being that you get a serious instrument watch, with the added appeal of decorative spectacle. This began at Sinn in the form of rendering tool watches in bright colors and is moving into exploring new materials. Accordingly, for 2021, Sinn has released a version of its U50 watch with a mother-of-pearl dial, the limited-edition Sinn U50 S Mother-of-Pearl S diver’s watch. 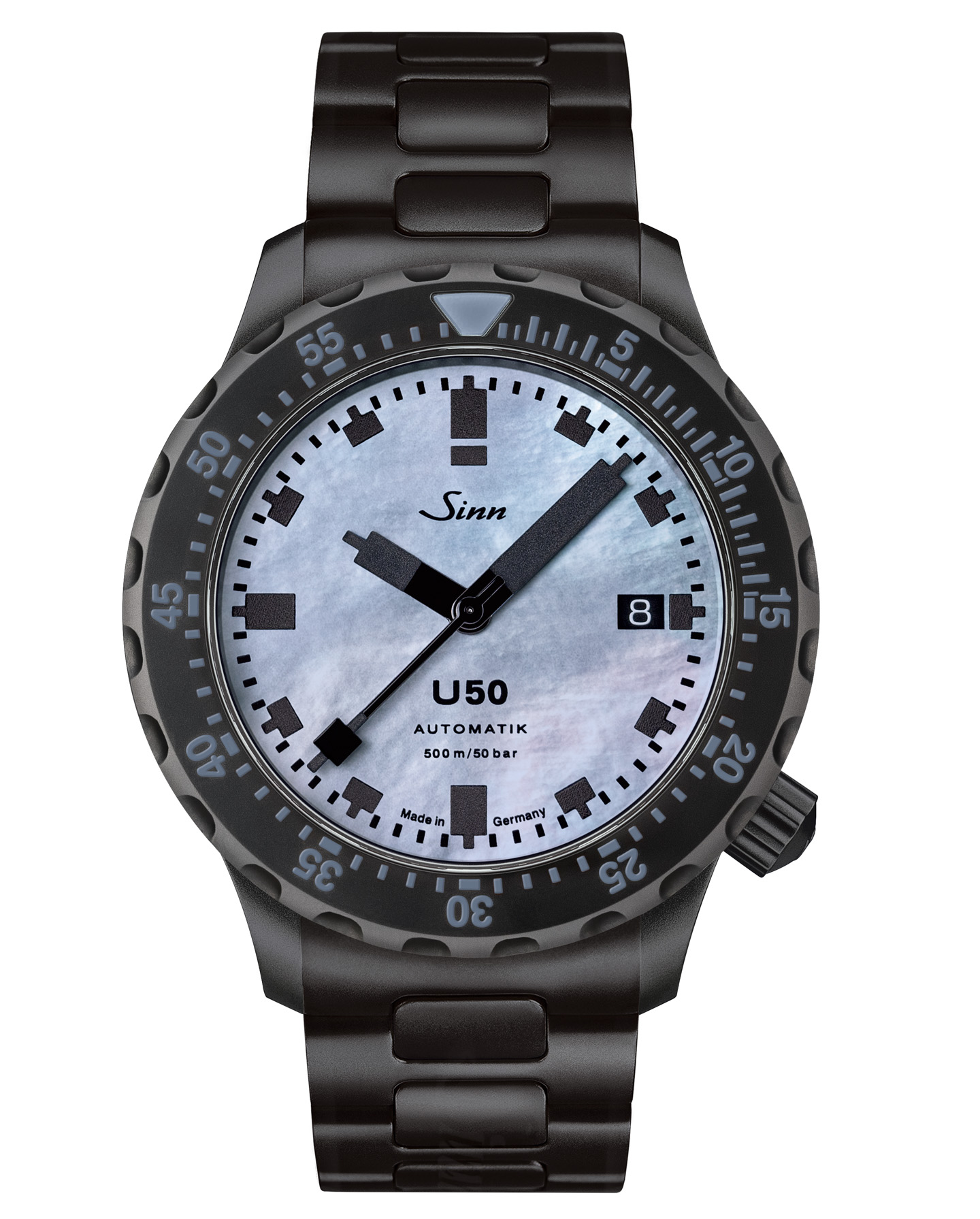 However, at 41mm-wide, the U50 watch (there are larger versions of this dial style) is a product that can and will be selected by women, from time to time. In parts of Europe and Asia, especially, you see many women wearing watches that are intended for men. (Sometimes, the reverse of this is also true.) Thus, Sinn is certainly going for a look that can appeal to both male and female audiences similarly — a challenging feat from a marketing perspective. 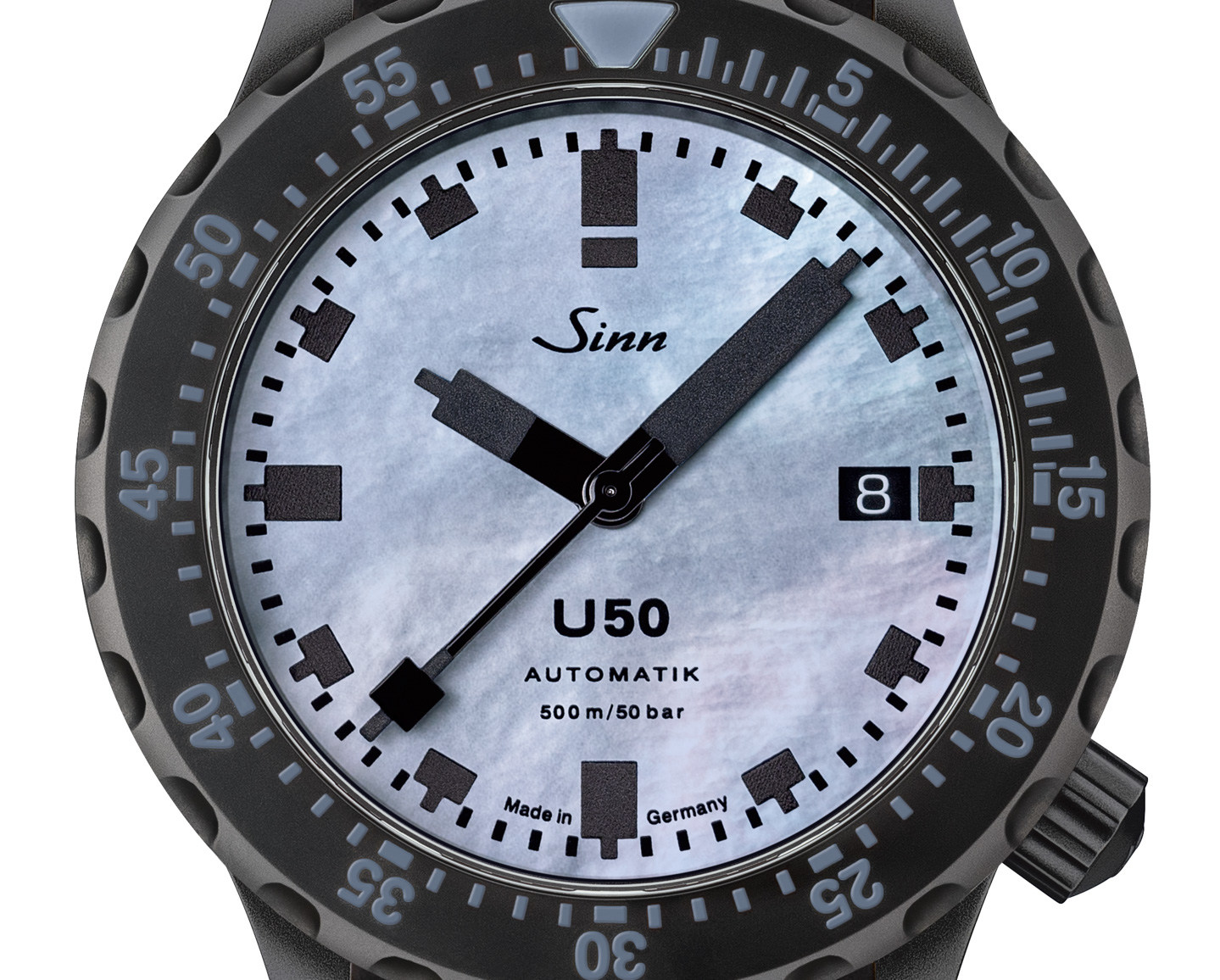 The black-on-black mother-of-pearl watch is also 11.15mm-thick and water resistant to 500 meters. Over the dial is an AR-coated sapphire crystal, while the case is fitted with a uni-directional rotating bezel. Both the bezel and dial have black-colored Super-LumiNova material that still glows in the dark, even if it doesn’t do so quite as well as lighter-colored luminant (that is able to absorb more incoming light). Note that “German Submarine Steel” is steel that has undergone Sinn’s “tegimentation” process. This effectively hardens the surface of the metal, making it both stronger and much more scratch-resistant.

Inside the U50 S watch is a Swiss Made Sellita SW300-1 automatic movement. This is an analog to the ETA 2892-2 automatic. The SW300-1 operates at 4Hz with about two days of power reserve. Given the design of the case, the mechanical movement is also protected from a fair bit of magnetic interference. For wearing comfort, the watch crown is located at the 4 o’clock position on the case. 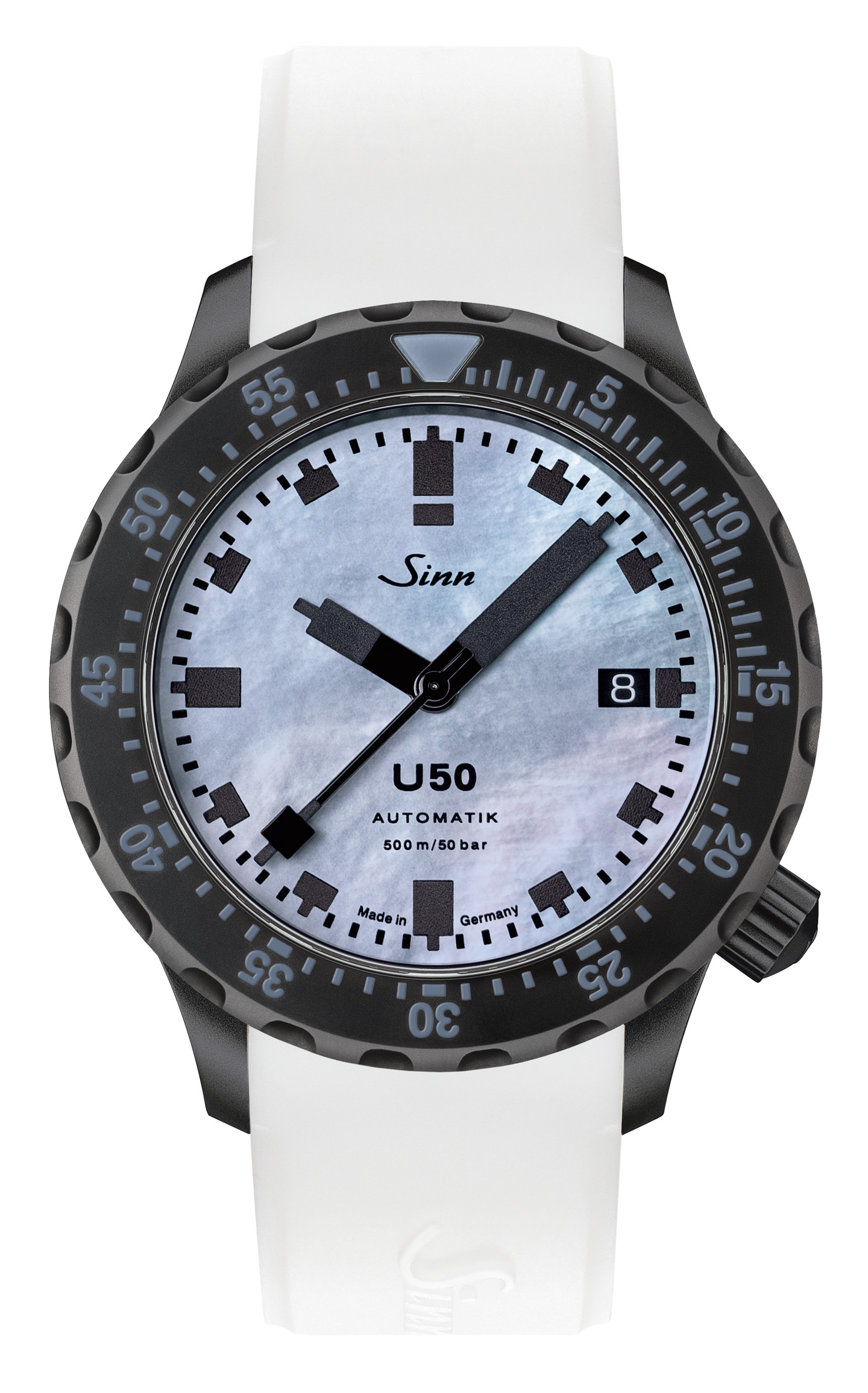 As is the case with most of its watches, Sinn offers a series of strap options, as well as a matching black-colored tegimented steel bracelet. In pictures, Sinn is showing off how the U50 S Mother-of-Pearl S watch looks attractive on a variety of the brand’s excellent rubber straps. Do you find a matching black strap to be too boring? Why not a white or red rubber strap? In reality, the neutral black tones of the watch case mean that you can pair it with a 20mm-wide strap of just about any color, and it will seem fitting.

As a limited edition of 500 pieces, I think it is safe to say that enough people will find the interesting appeal of a mother-of-pearl dial Sinn to enough to pick up one of these. The U50 in this exotic form is among the more medium-priced Sinn watches and, provided this model does well, I fully expect to see more mother-of-pearl in Sinn instruments soon. Price for the Sinn U50 S Mother-of-Pearl S watch is around 2,700 Euros. Learn more at the Sinn website here.