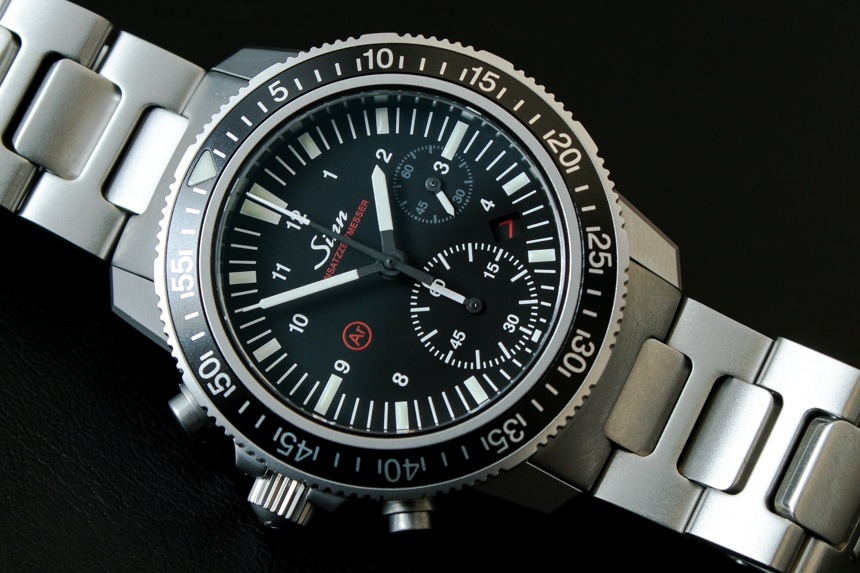 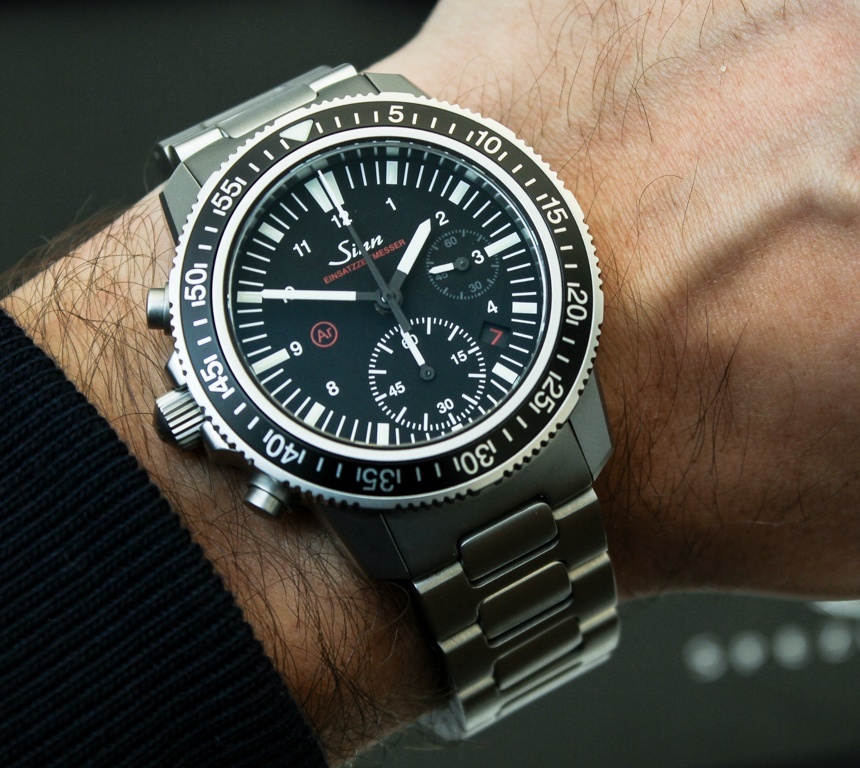 While both the concept and the term “tool watch” has been watered-down through consistent overuse, the idea of a tool watch is one that has always intrigued me. To my mind, few brands better define the watermark for tool watches than Sinn. The German manufacturer has been making role-specific tool-style watches for decades, from pilot’s watches like the 144 ST to cult-hit dive watches like the formidable U1. Among Sinn’s Baselworld 2014 additions, my favourite was easily the new Sinn EZM 13 diving chronograph. With an accessible case size and a mission-timer platform, this simple but highly functional chronograph is an excellent example of the modern tool watch. 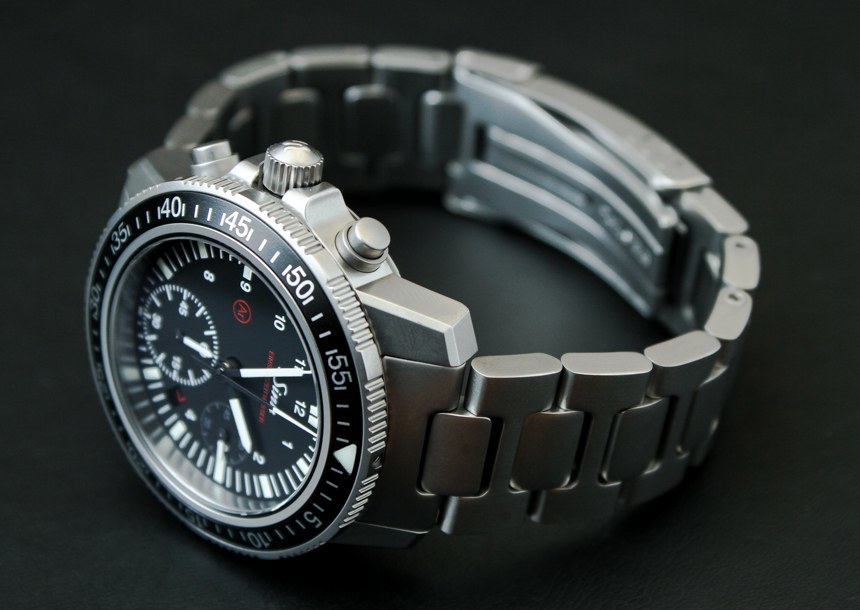 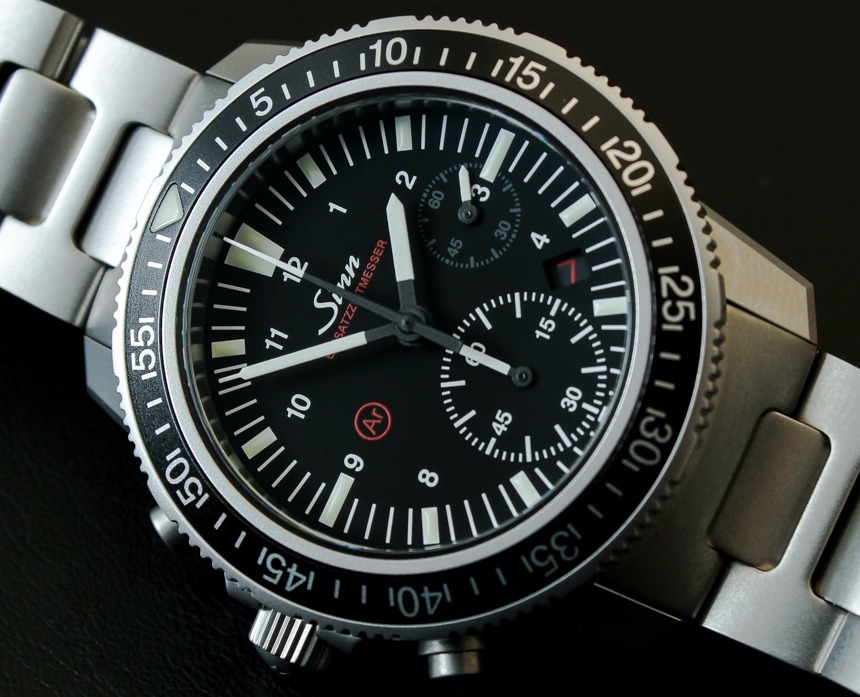 The Sinn EZM 13’s bead-blasted steel case is 41.5 mm wide and 15 mm thick with a lefty control layout, a unidirectional dive bezel, and your choice of a matching bracelet, leather, or silicone strap. Being an evolution of the EZM 3’s design, the Sinn EZM 13 is pure function and provides unencumbered legibility of the main time display and the 60-minute chronograph. There is also a cool red date display tucked away at 4:30.

What I found so appealing about the Sinn EZM 13 is not just its comfy size and focused design, but also its entirely hardcore nature. The Sinn EZM 13 is no lightweight, boasting anti-magnetic resistance to DIN 8309 (80K A/m), anti-shock to DIN 8308, low pressure resistance, Sinn’s Ar dehumidifying system, temperature resistance for -45 C to +80 C and 500 meters water resistance. Speaking of water resistance, a basic 500M pass was not enough for Sinn, as they have had the EZM 13 independently tested and certified to German diving equipment standards EN 250/EN14143 and Din 8306 by DNV GL (click for more info). Clearly, Sinn’s not messing around. 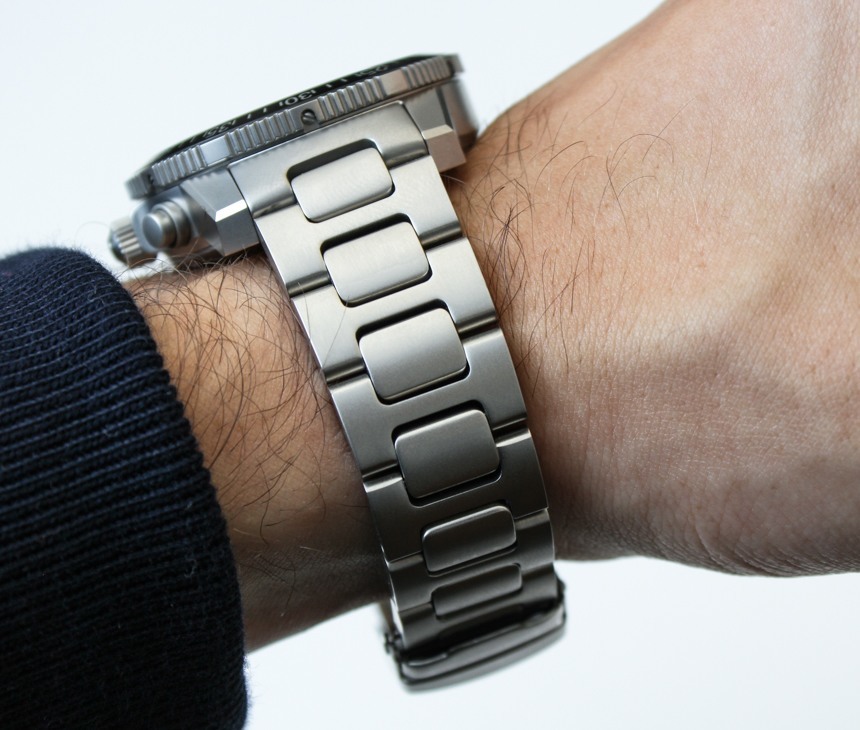 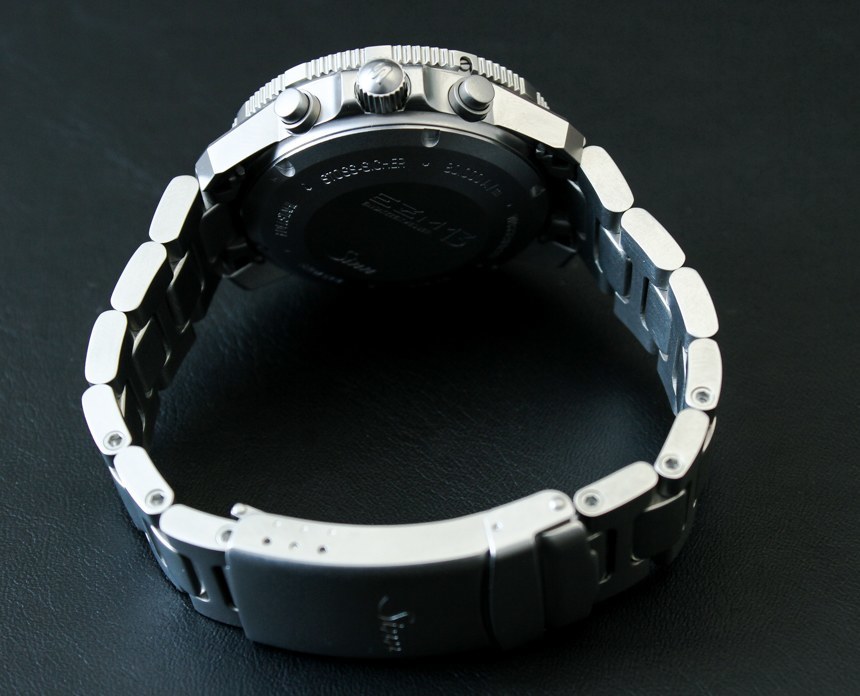 Time, chronograph, and date are managed by a Sinn-customized ETA 7750, which they call the SZ02. The SZ02 has 25 jewels and beats at 28,800 vph with a 60-minute chronograph. The chronograph is read via a full 60 minute sub dial at six, and this layout conforms to what Sinn calls a “mission timer,” or a watch with a very specific purpose and strong legibility. Sound familiar?

The Sinn EZM 13 expands on the success of the EZM 1, which was Sinn’s first mission timer. As an extension of this philosophy for the EZM 13, Sinn chose a lefty layout to keep controls away from gloves and cuffs and to ensure that the watch doesn’t limit the range of motion for the user’s hand.

The combination of the dive bezel and the 60-minute chronograph allows a diver to time two events (or intervals) simultaneously. Sinn also confirmed that the pushers on the EZM 13 can be used at safety stop depths (usually around 5M/15ft), meaning the Sinn EZM 13 could easily be used to measure your safety stop in the event your dive computer failed or you were using the Sinn EZM 13 as your primary dive timer.

This uncommon ability is thanks to Sinn’s D3-System, which mounts the pushers and crown directly into an opening in the case, as opposed to relying on a more common tube insert layout. With this clever and robust integration solution, the crown and pushers on the Sinn EZM 13 are more capable of withstanding impacts and protecting against the ingress of moisture and dust. 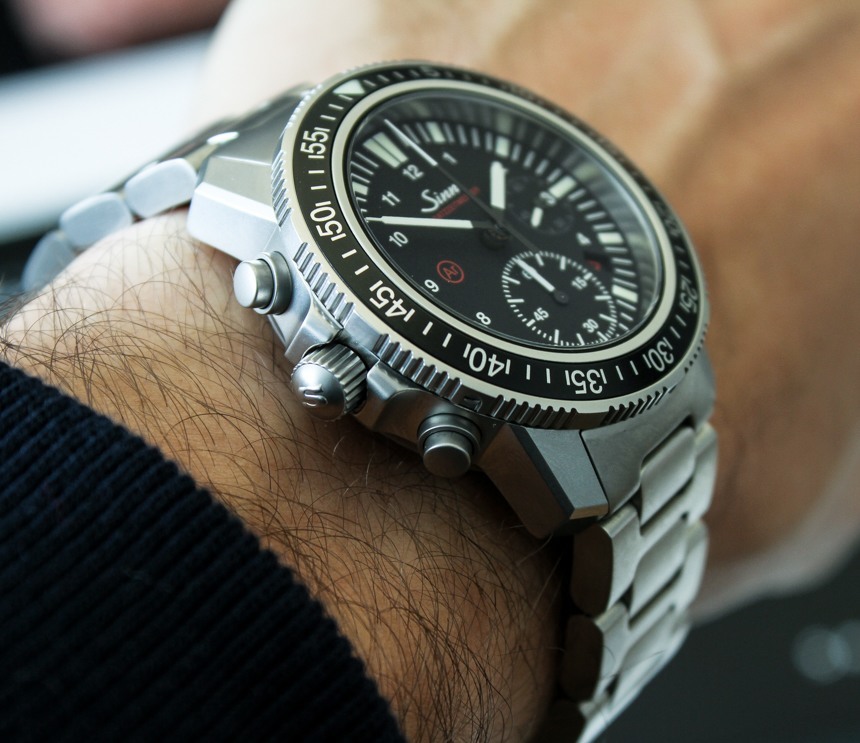 To summarize, the Sinn EZM 13 is the business. It’s Sinn at their best, creating a sport watch with a useable feature set and a dizzying list of protective features and intelligent designs to keep that watch doing its job for a very long time. I am not generally a chronograph fan but the $2960 USD Sinn EZM 13 is a watch that could (easily) change my mind. With the EZM 13, Sinn has successfully taken their EZM 3 diver and added just enough chronograph to expand its functionality but not so much as to spoil its laser-sharp focus. Sinn.de