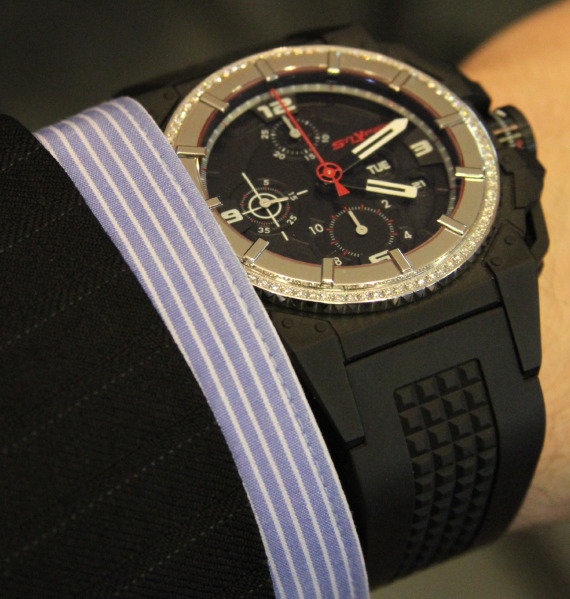 Designer and co-founder of the Snyper One watch Jean-Francois Ruchonnet has an interesting reason for calling the watch the “Snyper.” Aside from being styled after modern sniper rifles (which everyone can agree are really cool), he said the name is a metaphor for men seeking out women. It is kind of cute in a predatory like way. At least it shows our dedication. We find a target lady, the RIGHT target lady, and we watch from afar. Waiting for the right moment… to shoot. Only through the right calculated measures do we hit the target, we have but one shot before they know they are being aimed at and take cover if we miss. Yea that pretty much doesn’t sum up my relationship history with women, but then, again I am not French or Swiss. The watch is still really cool, though! Interestingly enough, Ruchonnet himself was an actual Sniper in the military. He’s had plenty of time with Sniper rifles to really get to know then. 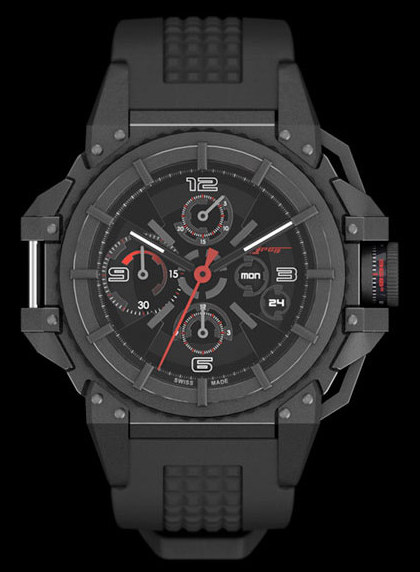 Mr. Ruchonnet is actually a very famous watch designer being behind a lot of popular models. Just Google the guy and you’ll be impressed. Well he and a few others I believe are behind Snyper with the “One” being their first model. While there is only one base watch right now, you can can all sorts of bezel treatments. Funny how you go from a very tool oriented style watch in all stealthy black to the same thing with a blingy diamond bezel and rubies. There are also versions with blue sapphires, and lots in between. Just click the link below for a PDF on all the styles available.

Note that I wrote the majority of this article before I actually had a chance to personally inspect the watches. This means the marketing images of the watches differ a bit than the actual release versions. Note the slightly altered dial and hands (which make the watches easier to read). There is also the addition of the “concrete” gray model. 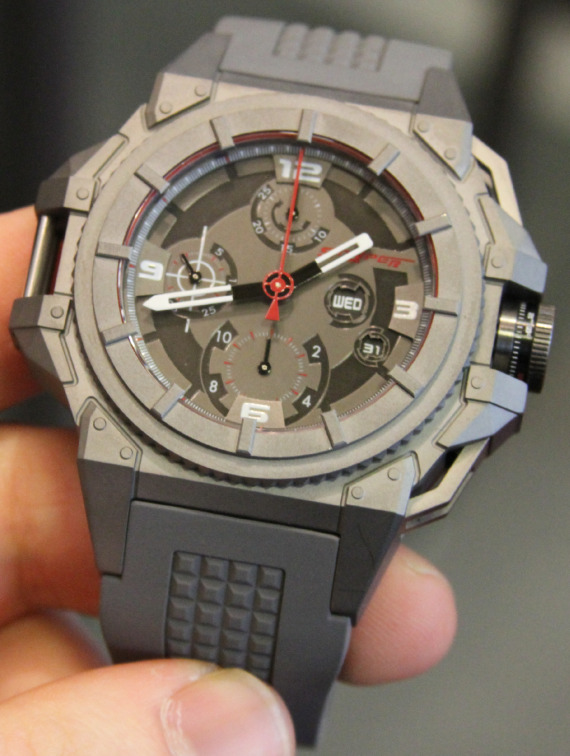 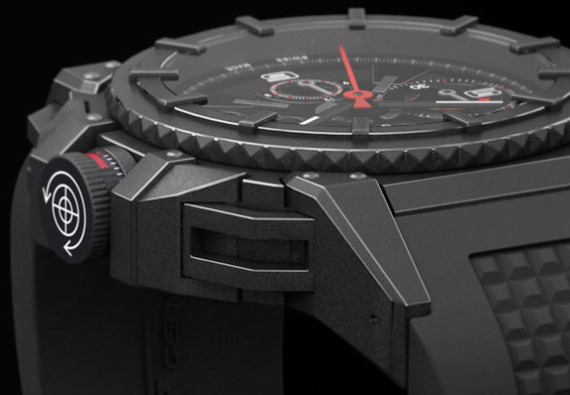 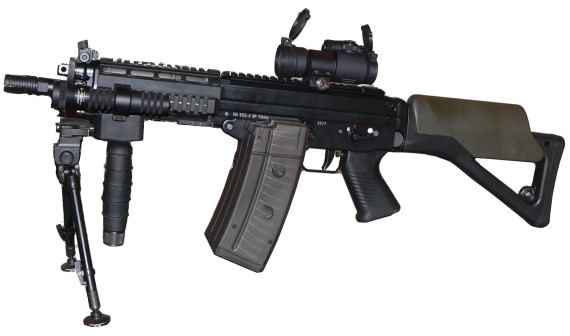 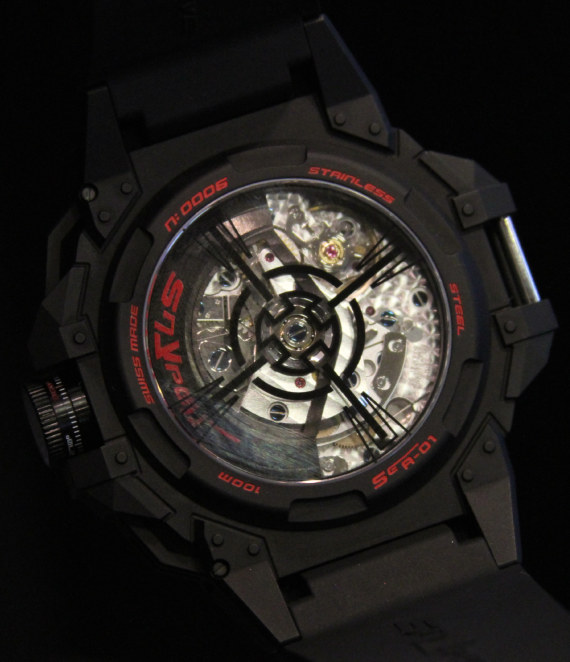 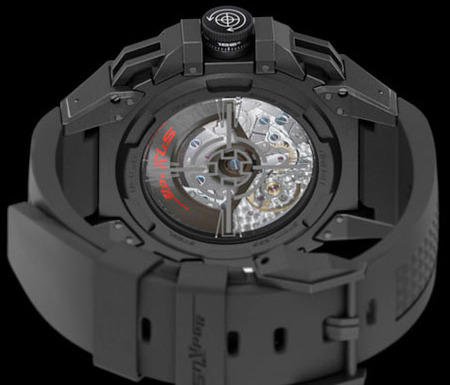 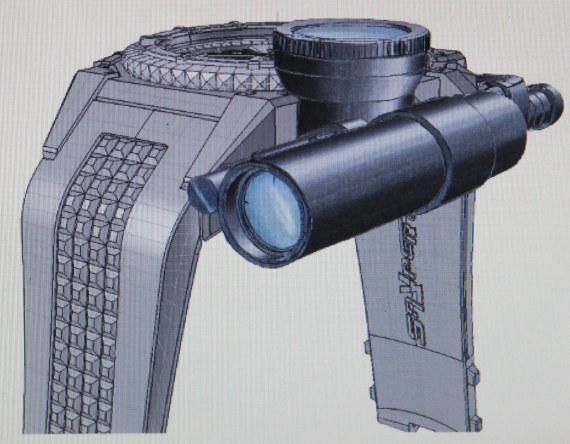 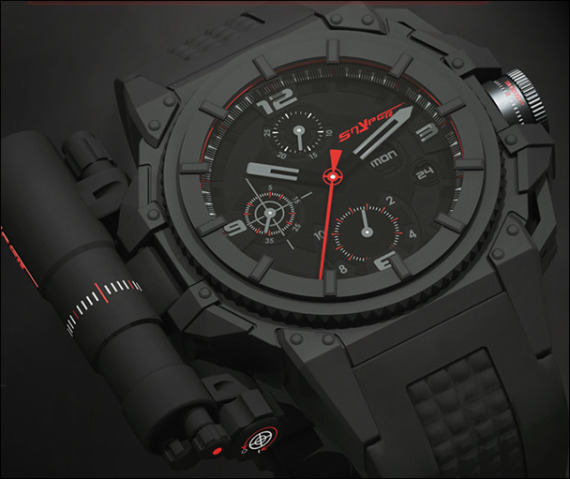 The watch itself is in black PVD coated steel with a 44mm wide case and a custom rubber strap. Style is of course inspired by modern sniper rifles like the SIG-550 series pictured, as well as a bit from the F117 stealth fighter jet (but to a smaller extent). There are a lot of design elements on the watch straight from the guns. Take for instance the cross-hairs on the dial, the chronograph pushers make to look like triggers, the polished metal bars at 9 o’clock on the case that are meant to look like clip holders, and the crown which looks like a sight adjustment. You see the cross-hairs again on the rear of the watch in gray over the sapphire caseback window.

Remember those polished metal bars on the left side of the watch? According to Snyper those will be used in the future for mounting optional modules. At first I had no idea what these things might be (like a compass or second watch?), but then I learned what it is for. The first module will be a laser that attached on the side. See images for the concept. This will be available soon. Ruchonnet indicated that in time he would like to release a second module that is a telemeter and possibly a infrared heat monitor. Why? Well basically when “scoping” out ladies at a club you can see how far away they are and their body heat. All part of womanizing science.

The dial is pretty easy to read, but I feared it might be a bit too black on black for optimal legibility. Inspecting the watch I can say that it is quite easy to read. This all depended on how well the hands stand stood – you get some idea seeing the watch in the video. There is lume on the hands. The chronograph subdials and date and day windows are all very cool in design and clearly inspired by modern weaponry and instrumentation. The standard version actually has a slightly tinted sapphire crystal that darkens the dial a bit. Overall the look is almost a perfect analog of the ideal in such weaponry genres. After checking out the watch I can say that I really like it. Totally the type of fun watch I would wear. Yes, the watch isn’t cheap, but at least it is fact a hardy timepiece that is more than just a style impostor. With its hardy automatic movement and steel case (100 meters water resistant), it should put up with more than enough. 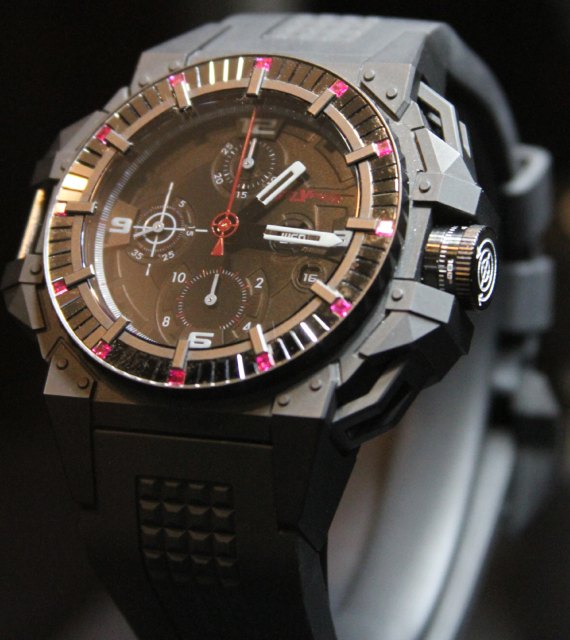 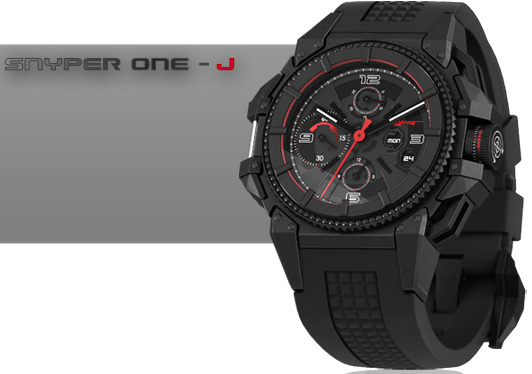 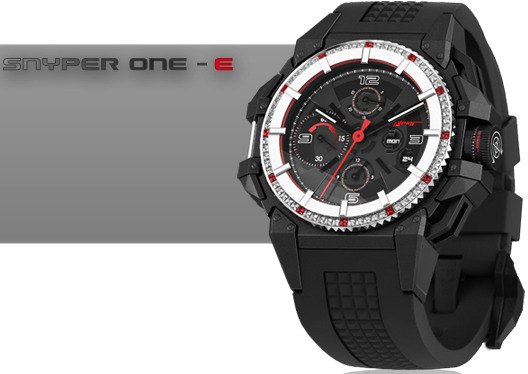 No surprise that the watch has a nicely decorated with custom Snyper signed automatic rotor, Swiss Valjoux 7750 chronograph movement. The package together looks pretty good and is actually well priced for an all Swiss watch. According to Snyper its main influence in design (which it thematically borrowed from freely) at watches such as the Hublot Big Bang, Concord C1, and Audemars Piguet Royal Oak Offshore Survivor. In terms of price the Snyper is much less expensive than them all (well, not without all the optional jewels, and likely future gold versions), but is still in the luxury range starting at 7,390 Swiss Francs. Good news is that they have fully embraced the Internet, meaning you can get yourself a Snyper watch online from their website.

Click here to see every version of the Snyper One watch.