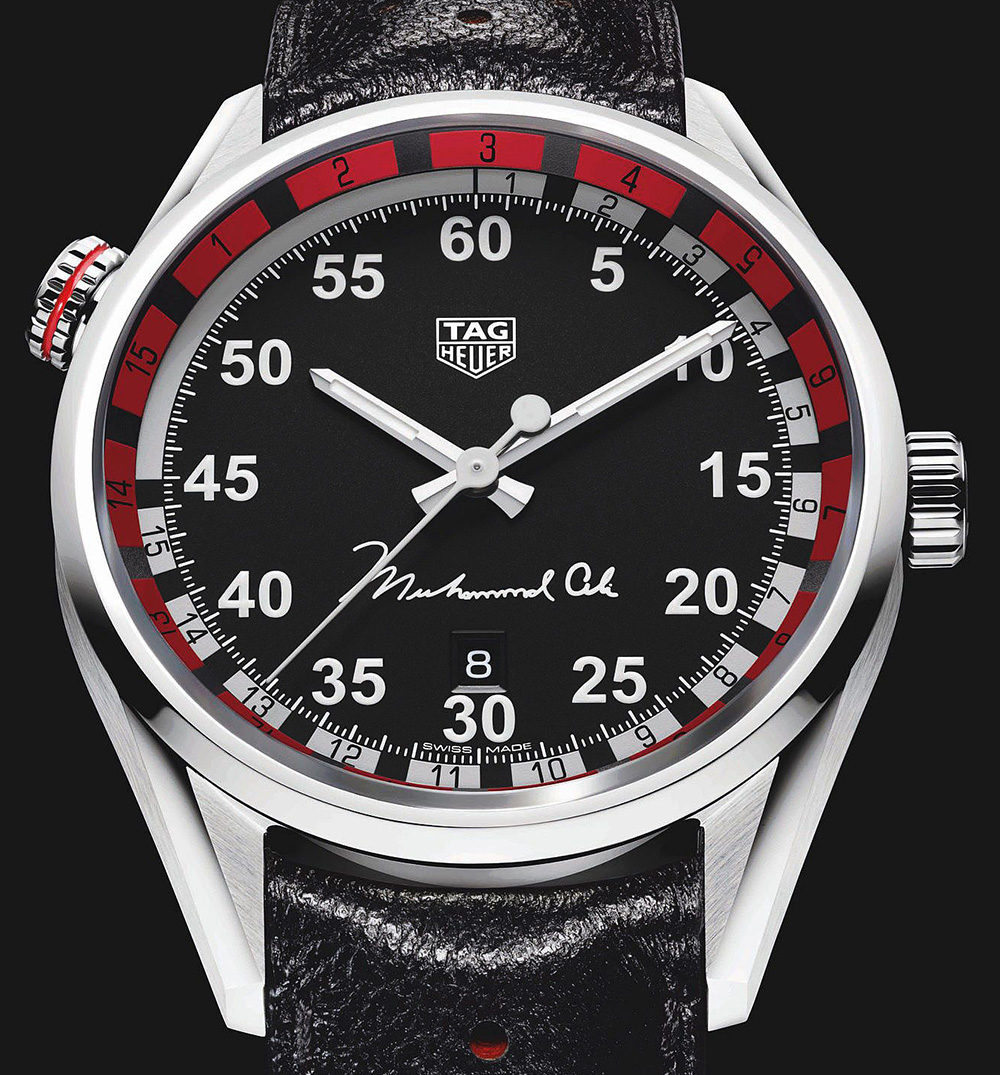 TAG Heuer assembled a healthy dose of New York’s “who’s who” at the famed Gleason’s Boxing Gym to break cover on their latest release, one that might in fact have a more niche appeal than the grandiose event might suggest. The TAG Heuer Carrera Caliber 5 Ring Master Muhammad Ali watch is a new piece based on one of Heuer’s stopwatches from the ‘50s whose interchangeable rings made it the ideal choice for timing the three-minute rounds of a boxing event. 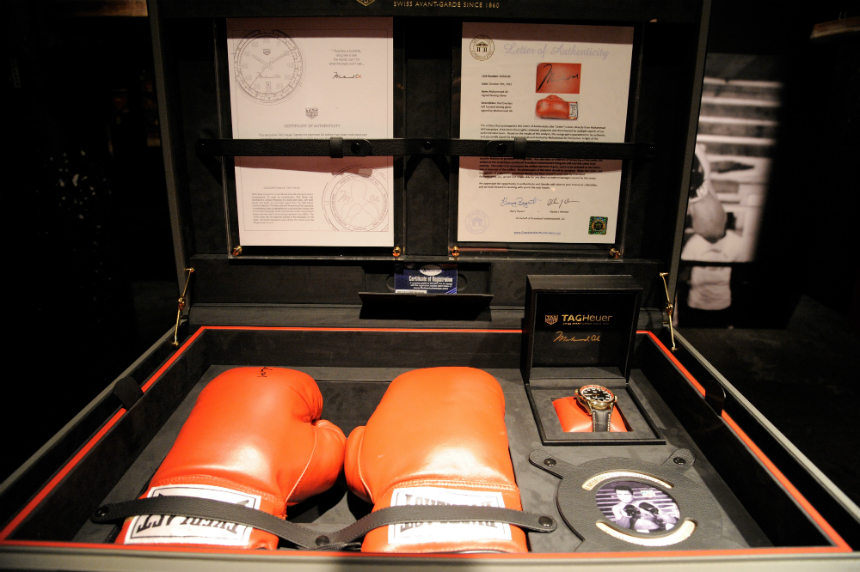 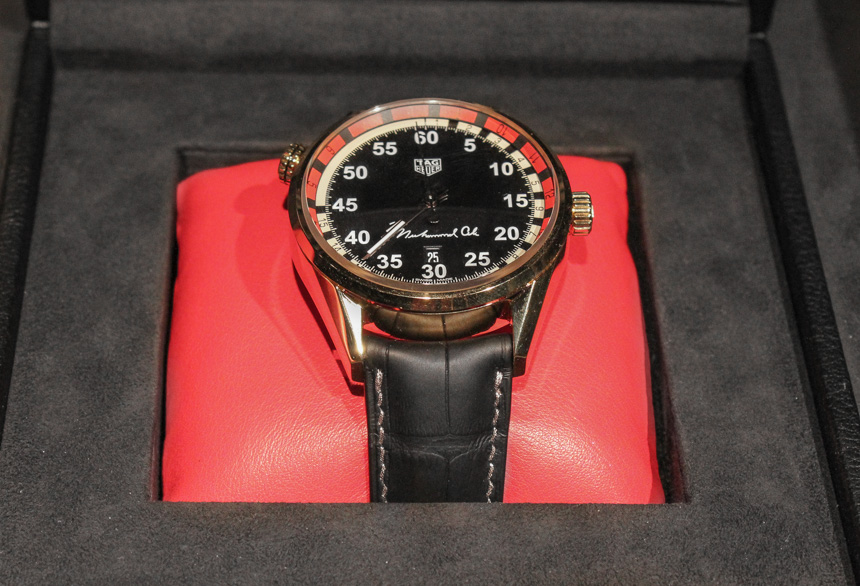 The gold version which was auctioned 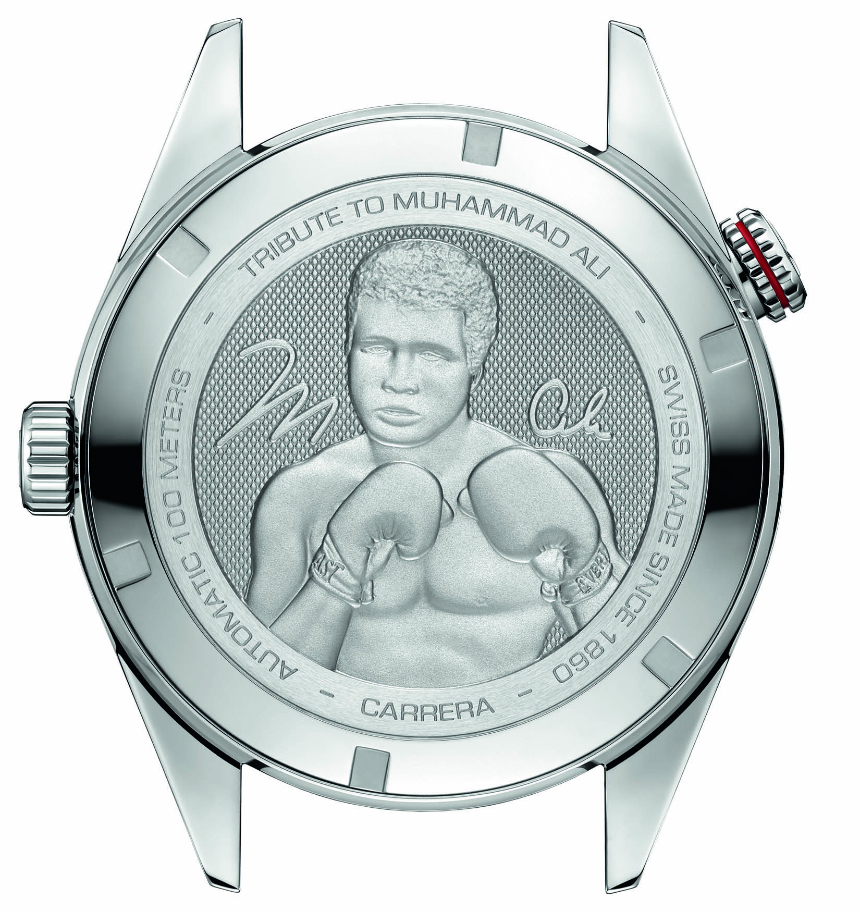 You see, Jean Claude Biver’s interest in the boxing world was made quite clear with the release of the Hublot King Power Knockout World Boxing Council watch back in 2012, as well as the subsequent charity auction that raised a cool million dollars for the WBC’s pension fund to support retired boxers — and with that in mind, TAG Heuer’s foray into the boxing realm certainly comes as less of a surprise. 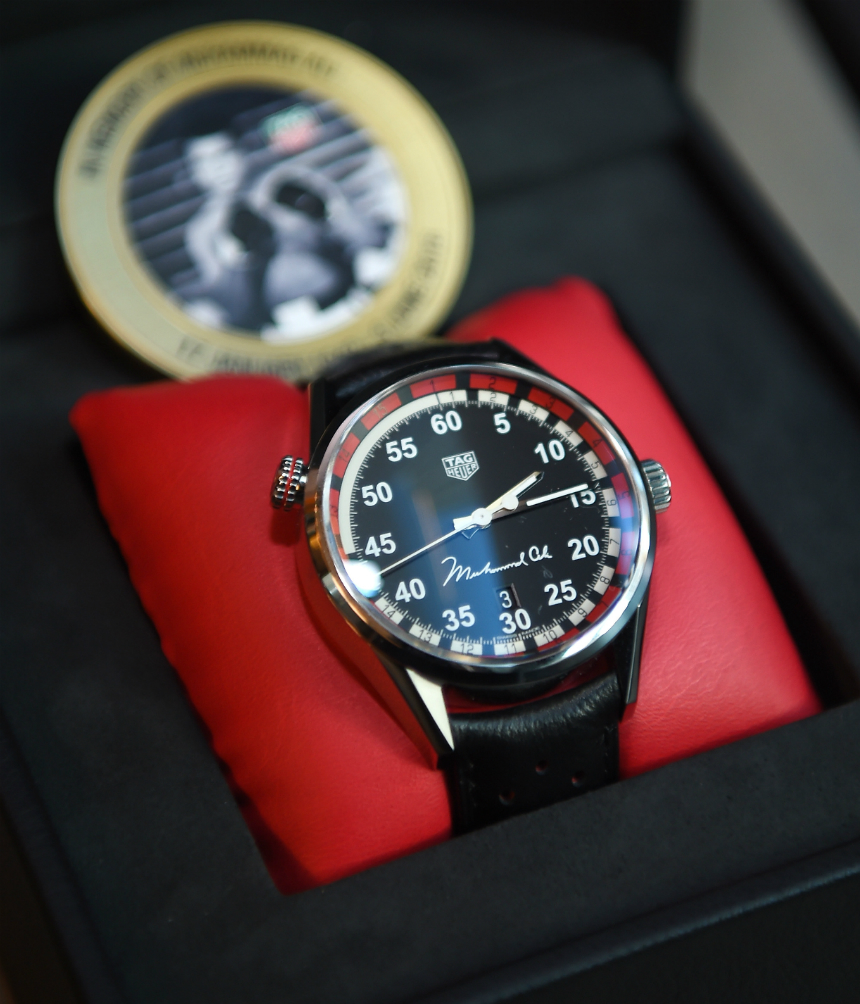 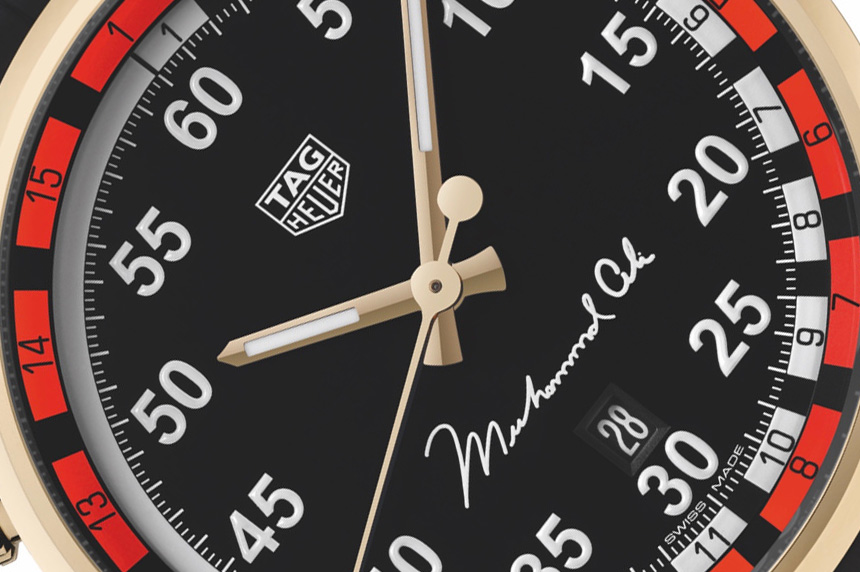 Dial on the one-off gold version

The TAG Heuer Carrera Caliber 5 Ring Master Muhammad Ali itself isn’t anything particularly glamorous when you get right down to it, but if there were ever a limited edition that need not be that, then you’re looking at it right here. The stainless steel 43mm-wide case features a black opaline dial, and adjustable inner minute track displaying three-minute intervals, this new release certainly looks more rugged than sharp-edged; especially when compared to other Carrera models, like the Heuer-02T (reviewed here) or this rather controversial (and we think super cool) Nendo Limited Edition. Inside the case is the TAG Heuer Caliber 5 that should actually be based on a three-hand Sellita SW200. 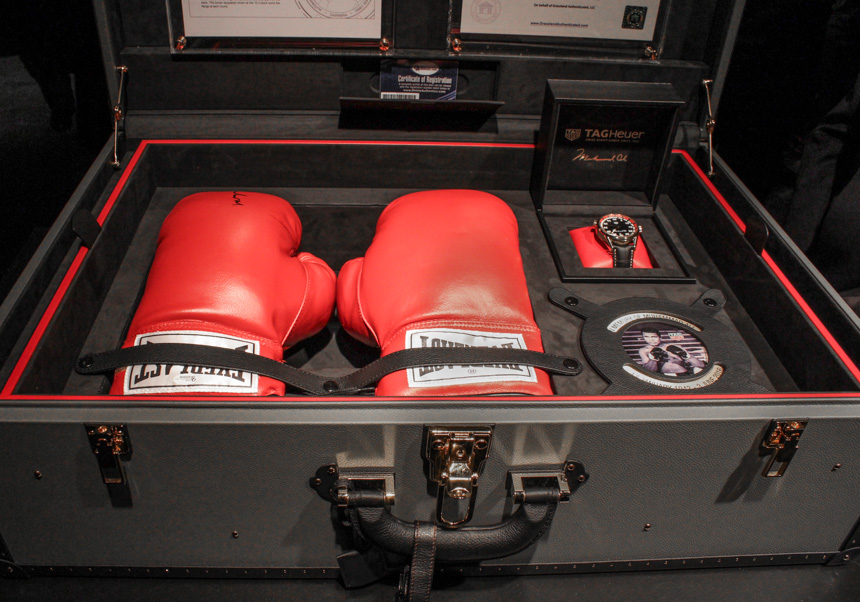 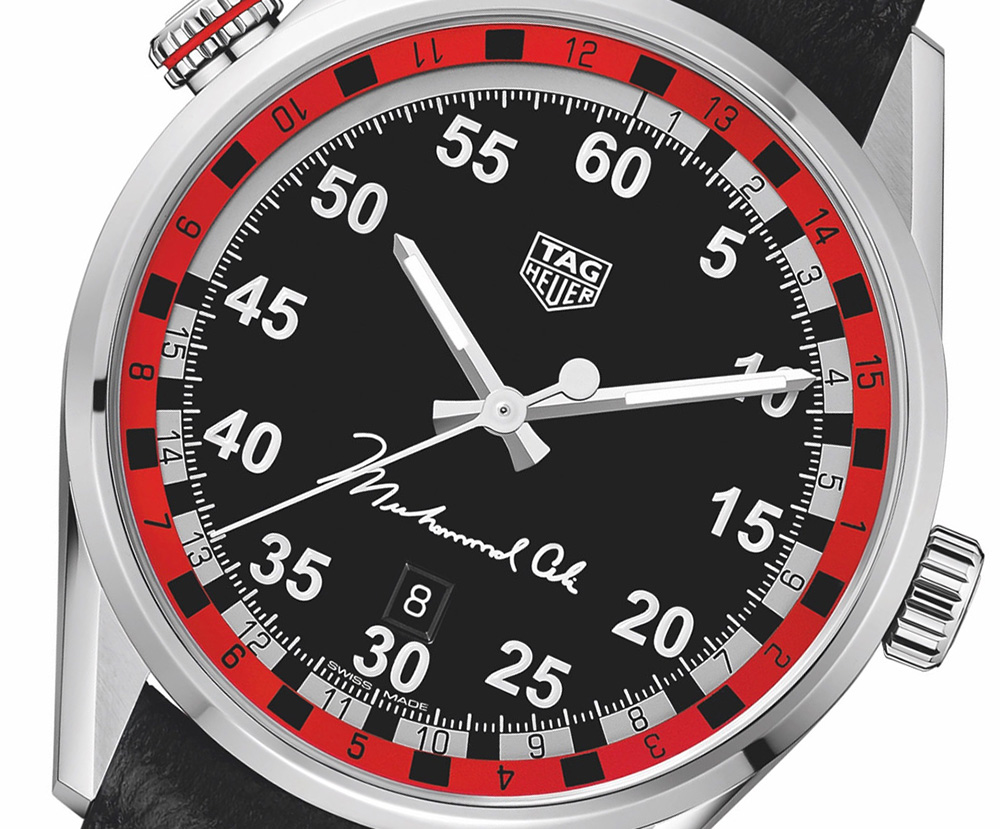 Not-so-subtle details include the very stopwatch-like minute indices at each 5 minute mark up front – those are some generously sized, super contrasty numerals – while a very handsome portrait of Ali engraved onto the case-back completes the theme. It’s a slight departure from the balance of TAG’s repertoire, though not too far of one. Its case is indeed straight out of the Carrera line sheet with the long, straight lugs and perfectly round bezel, with the expected addition of its extra crown at 10 o’clock and the indices and hands also are somewhat in line with what we have gotten used to seeing from the brand. 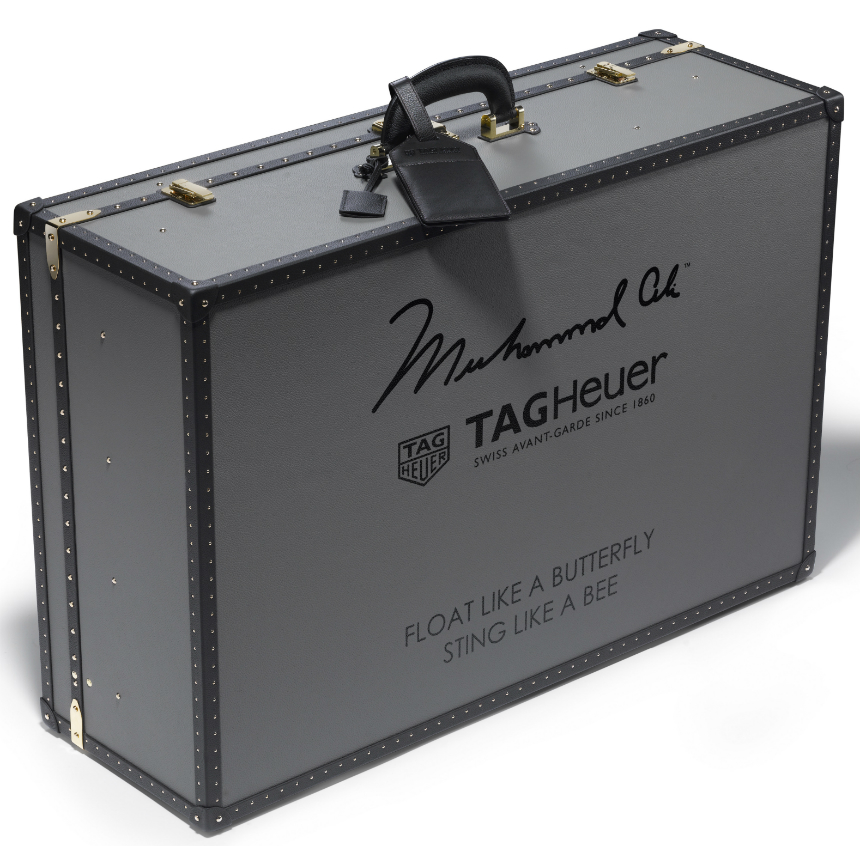 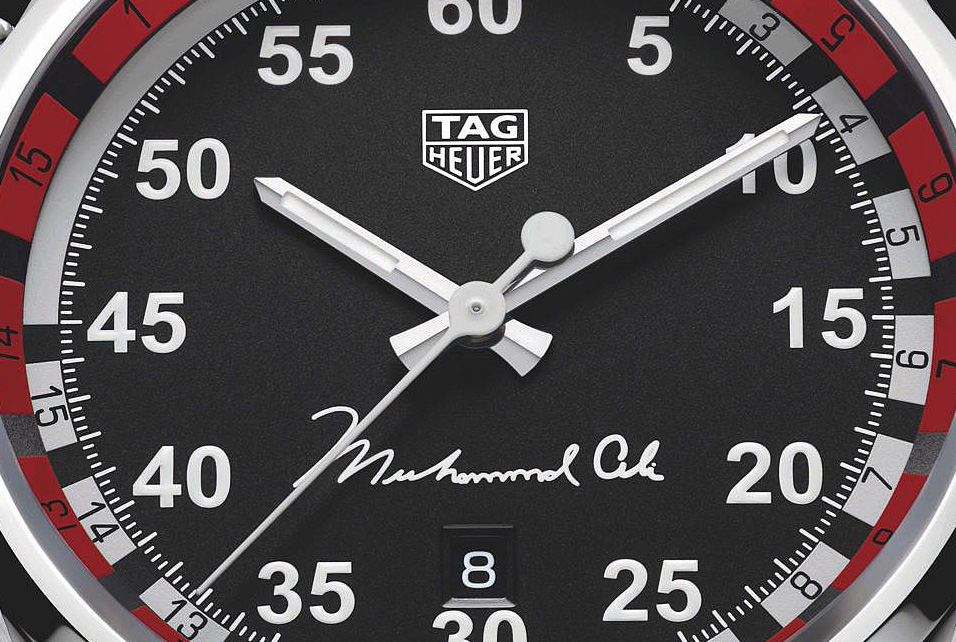 Here’s how the TAG Heuer Carrera Caliber 5 Ring Master Muhammad Ali works: heavyweight boxing bouts used to be 15 rounds (now they’re 12), three minutes each, plus a one-minute break between every round. This new piece has 15 sections so that it matches the dial of the Ring Master from 1957. What you have to do is use the crown at 10 to rotate the flange ring with the 15 chapters, align it with the minute hand like an internal diver’s bezel, and watch the minute hand sweep along the chapters, marking the passing of each round.

If you have a keen eye for detail, you have noticed that there are not one but two rings, with an off-white-colored one running on the periphery of the dial. This is there because there are amateur/women’s boxing matches with two-minute rounds (instead of three) and so this new piece, just like the old one, can be used to time either. 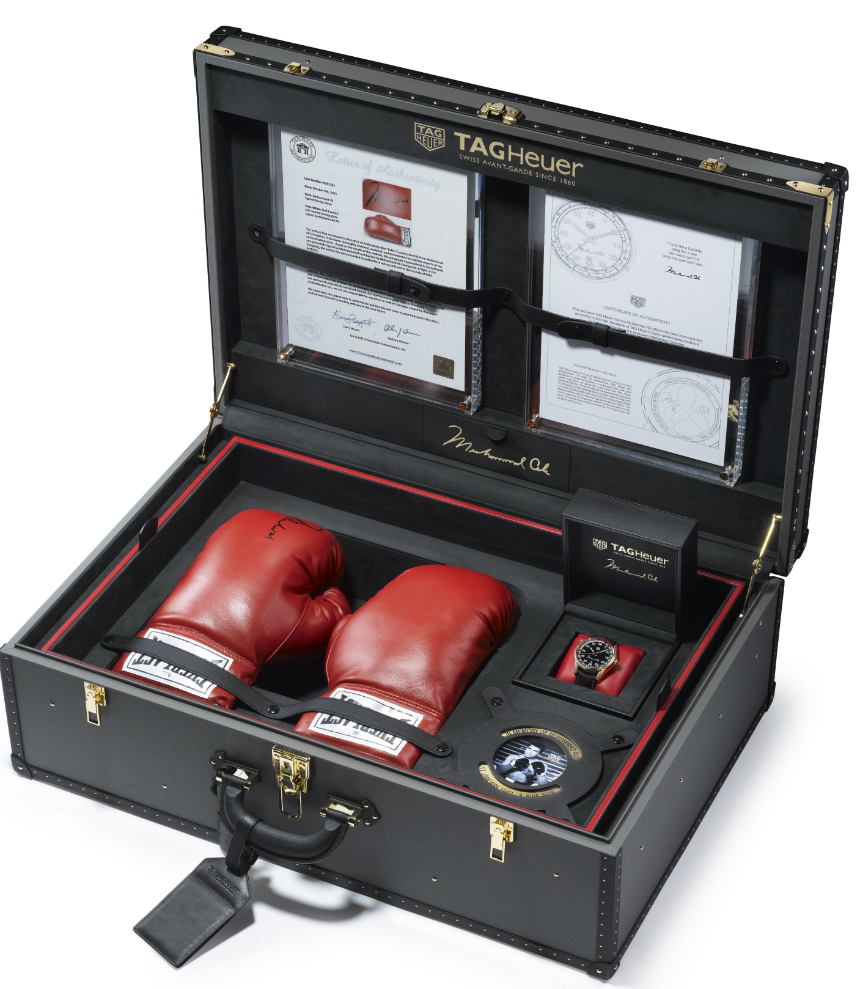 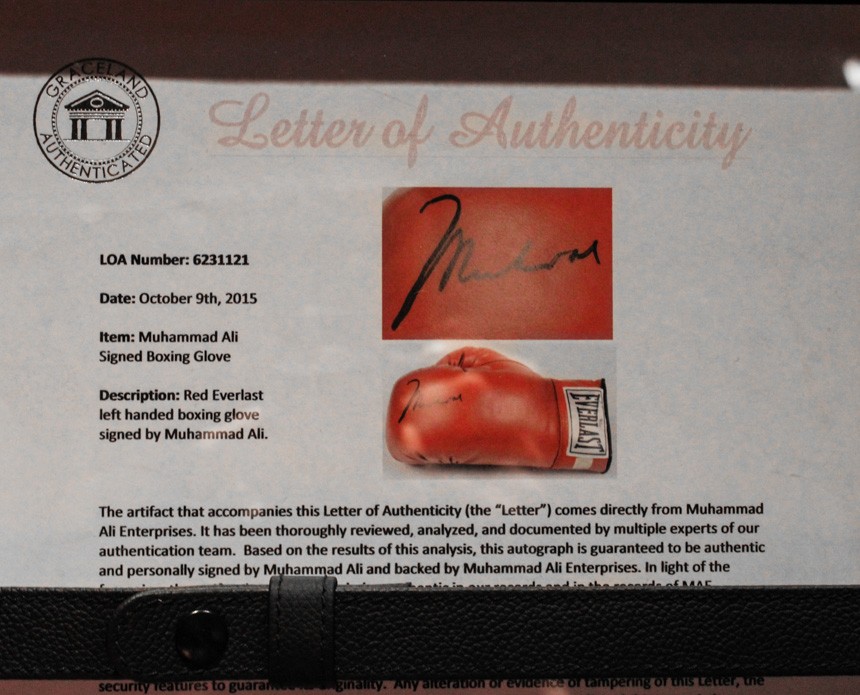 Take a few steps back from all this and you’ll see: this type of insertion of a product into niche lifestyle sectors is exactly the kind of thing that Jean Claude Biver excels at. From the TAG Heuer Formula 1 David Guetta Special Edition (which, to be fair, is a nice-looking piece considering its target audience) to the Zenith El Primero Skeleton Tribute To The Rolling Stones — not to mention an absurd volume of “limited” releases at Hublot with everyone from bespoke shoemaker Berluti to talented tattooer Maxime Büchi of Sang Bleu — the man has done an inimitable job of placing the LVMH brands he oversees in high-visibility positions in all sorts of sectors to help fuel sales… yes, primarily from the likes of people that aren’t collectors and enthusiasts. 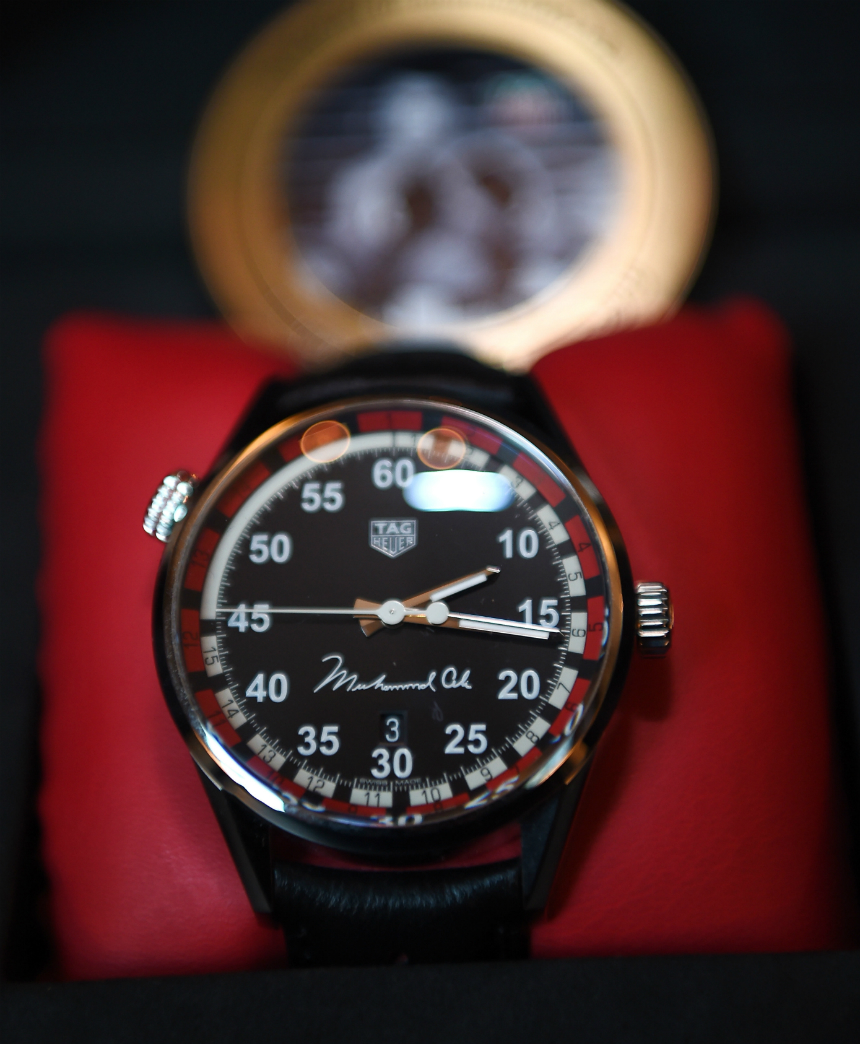 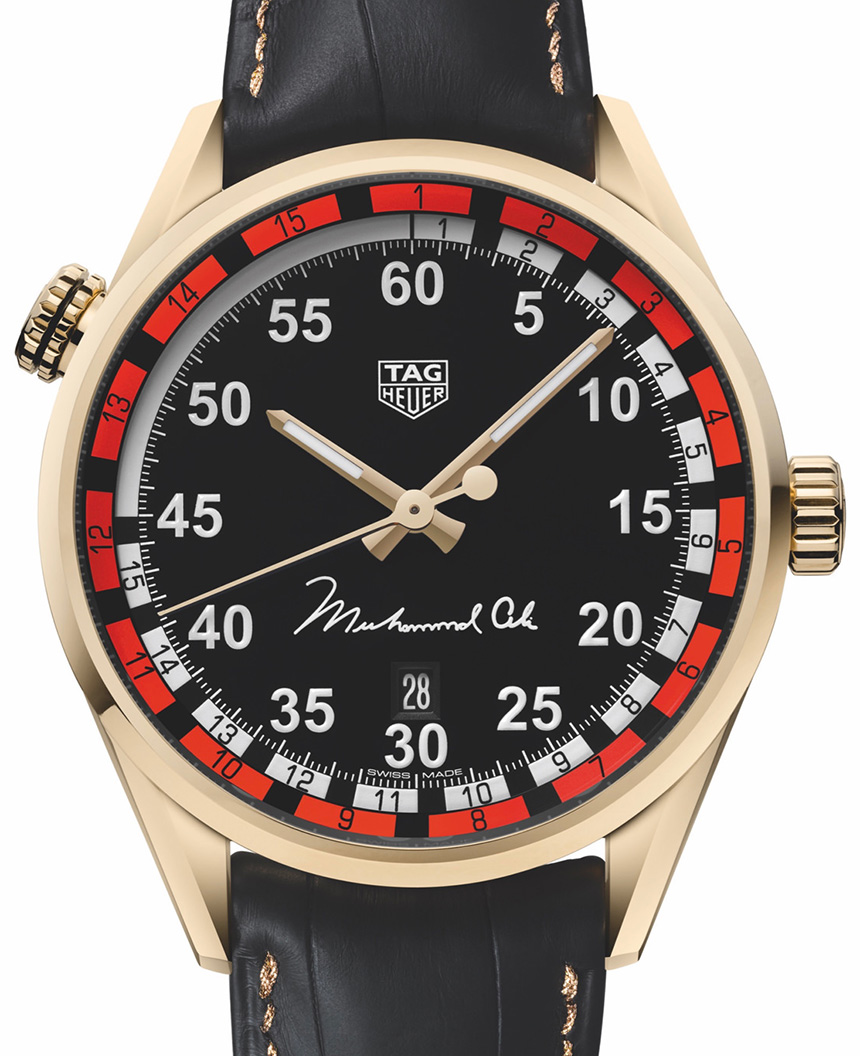 With that noted, Biver has not neglected die-hard fans of TAG Heuer – in fact, we are more spoiled for choice for olden but golden Heuer revamps than we have been in a long, long time. The question is, will niche, non-traditional releases cut watch enthusiasts’ appetite for the hot new stuff like the amazing Monza reissue (hands-on here), certain Carreras, or even haute horlogerie stuff like the new 1/100th second mechanical chronograph, the Mikrograph? Nope, I think it will not. It’s just these two characters – neither that big of a mismatch for the versatile brand that TAG Heuer is – have to co-exist peacefully, for these other buying demographics that’ll keep TAG afloat as this industry-wide recession continues. 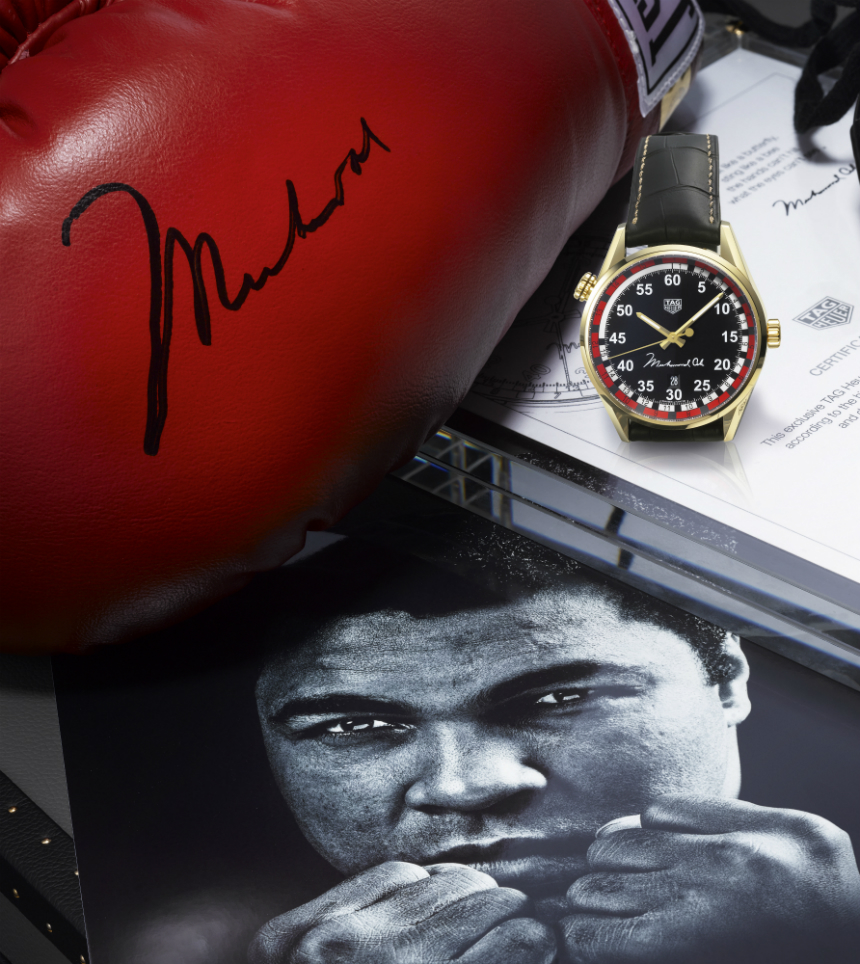 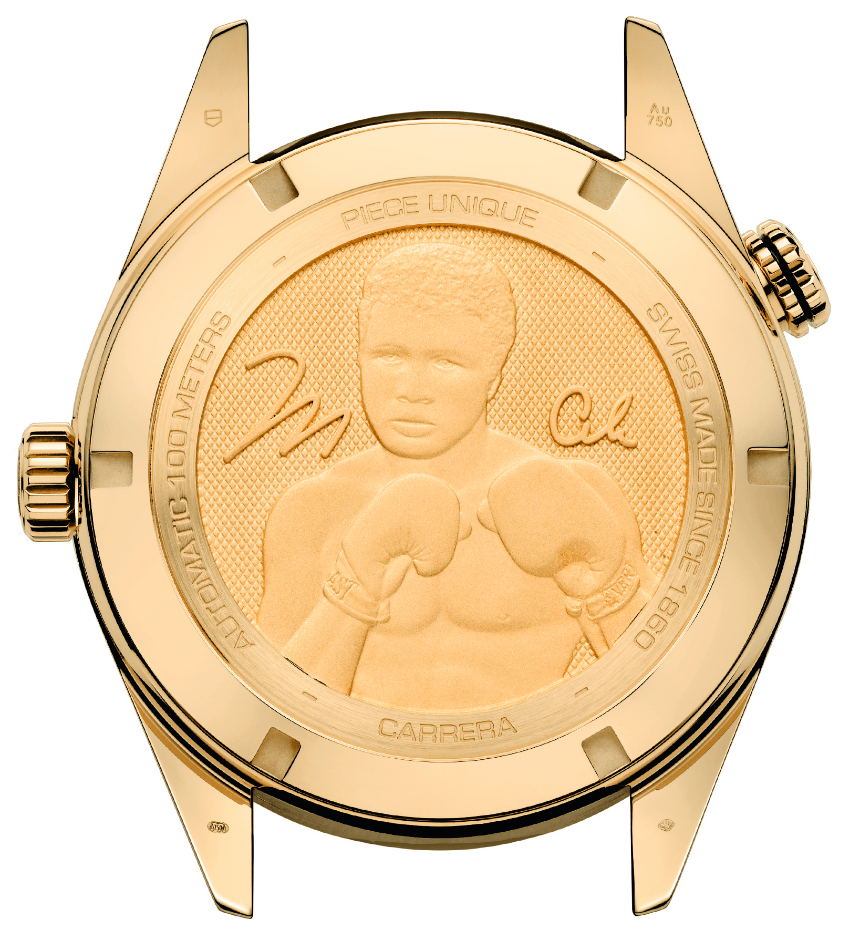 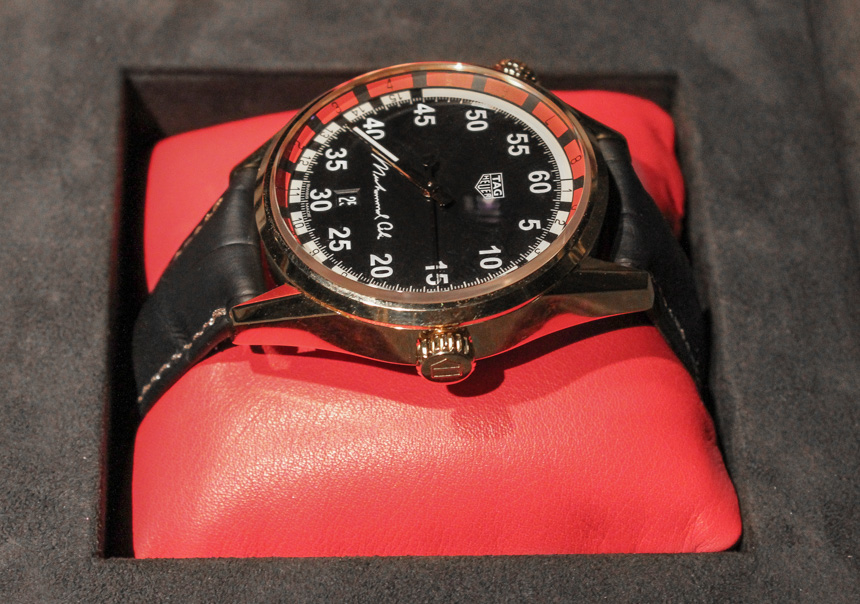 Back to the event at hand, the most notable component to the evening’s festivities (and the reason so many made their way out to a boxing gym in Brooklyn on a Tuesday night), was the “one-of-one” gold TAG Heuer Carrera Caliber 5 Ring Master Muhammad Ali timepiece sitting in the center of the room that was auctioned off during the evening. Complete with a signed and authenticated pair of Ali’s boxing gloves, the auction drew a healthy number of bidders. All of the proceeds of the sale were directed to The Ali Center, and by the time the hammer dropped, the solid gold watch netted a healthy $88,000 (from JCB himself, no less). All told, TAG cut a check for a respectable $119,000 to the center that night in hopes of benefiting the numerous education programs the center runs every year. 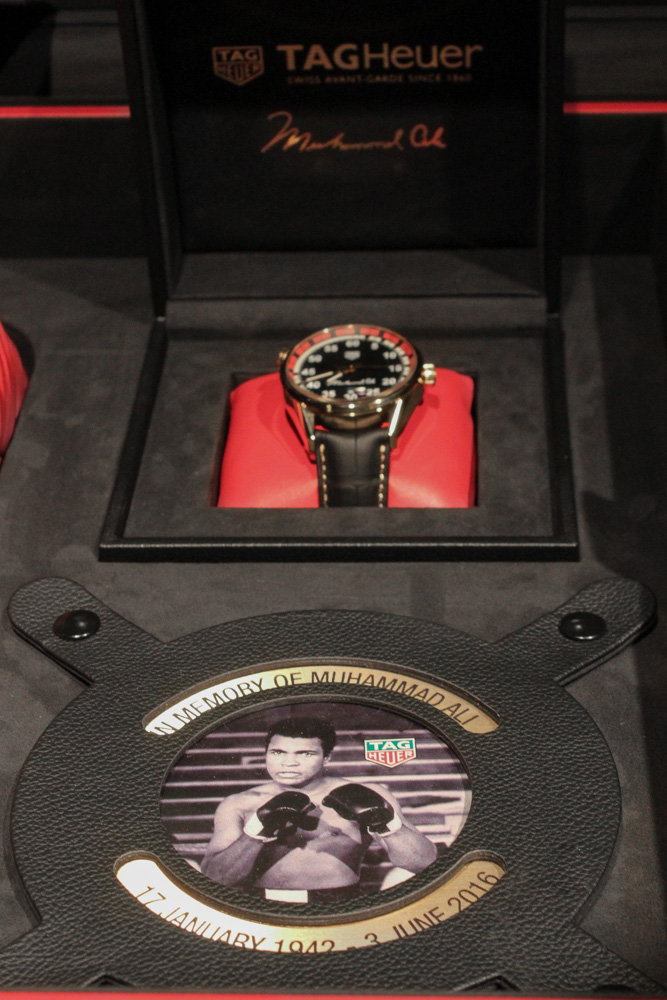 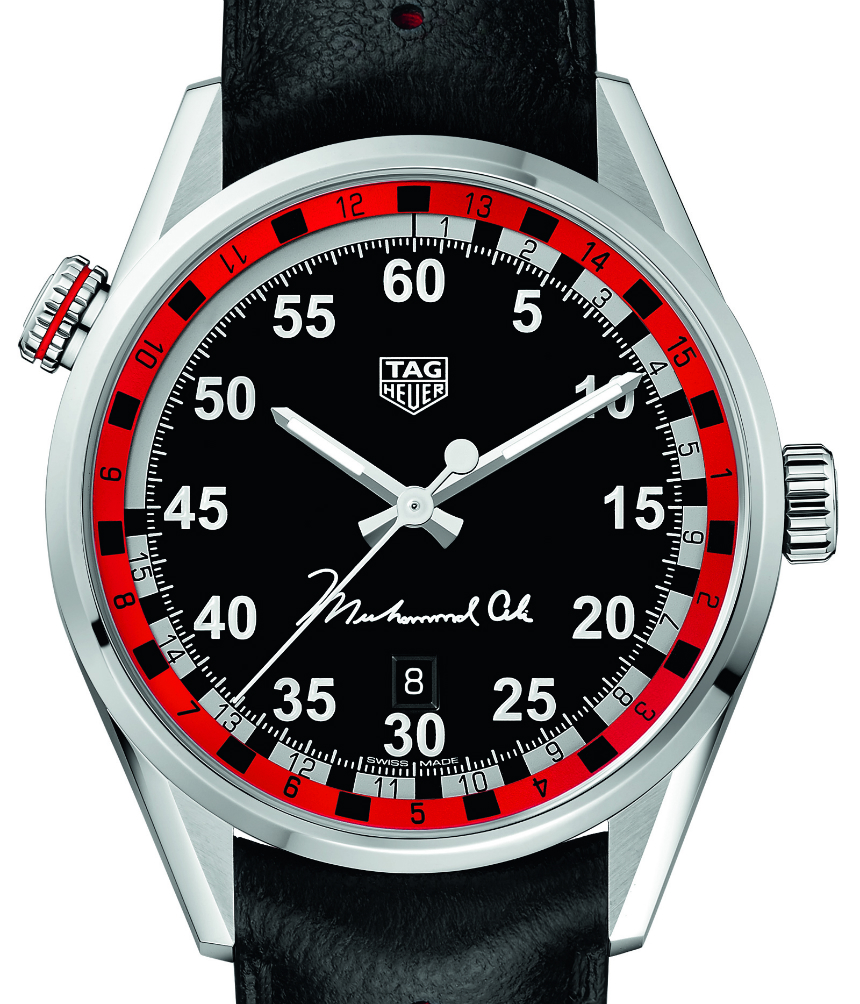 Now, the one talking point that seems to be on the tip of everyone’s tongue is the timing of this partnership. Much as people want to take shots at Biver for this release coming quite hot on the heels of Ali’s passing, I wouldn’t be so quick to throw stones. The partnership with Ali — a man who Biver has great respect and admiration for — was penned prior to his death and was initially set to see the light of day right around the time of his passing. After discussing the matter, a decision was made to push the release back six to eight months, which may seem a little soon for some, but that line in the sand can be somewhat arbitrary. Either way, this is by no means TAG’s first rodeo when it comes to athlete collaborations, and love it or hate it, it’s going to be more of a hit than a miss among boxing fans when it starts landing in boutiques. The TAG Heuer Carrera Caliber 5 Ring Master Muhammad Ali watch is priced at $3,000. tagheuer.com