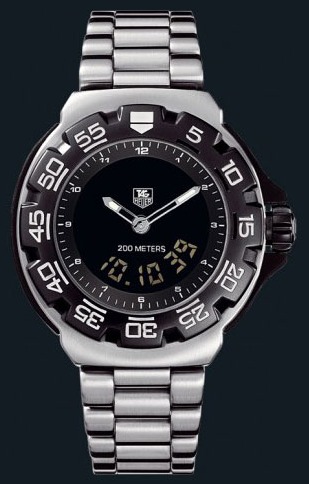 Released a few years ago I believe, this cool looking Tag Heuer really flew under the radar for me. Some people are immediately going to dismiss it because it has an analog and digital face, but that has a lot of the appeal for me. Ever since the Omega X-33 became a cult hit, watches with good pedigree and a quality designs that use this style have fascinated me. With analog/digital version of the new Formula 1 design, Tag Heuer joins the ranks watches from Breitling (the Aerospace, among others), Omega, (X-33), Montblanc (Sport Titanium Digital), Bell & Ross (BR03 Type Aviation), Chopard (Grand Prix de Monaco Historique Time Attack MF), and others. 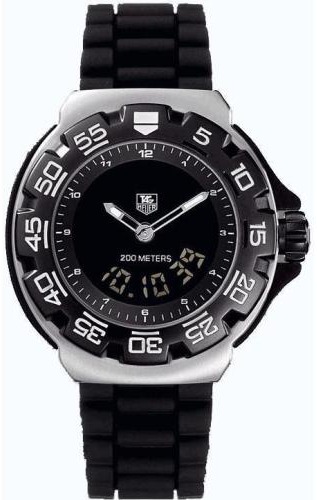 In my opinion Breitling popularized watches like this for the mainstream. Although the Aerospace watch has a quartz movement, it is highly functional, and super accurate with its ETA Superquartz movement. This sold a lot of people on the concept. Like I said, it was the Omega X-33 that I think had collectors and more enthusiast types take notice. Why all the buzz? Well when it comes down to it, you can have the convenience and functionality of a quartz watch, in the shell of a nice analog watch. Toting around a plastic quartz watch simply doesn’t give you the same feeling or respect that something with a good-link metal case does. Watches like this are one part “disguise,” and one part nod to the need for watches to be functional tools.

This isn’t Tag Heuer’s first watch of this nature – but the nicest one. The first Tag Heuer analog/digital watch that I know of is one of its older Kirium F1 models. With the new generation of Formula 1 watches, Tag Heuer brought this concept back, and I think it did so very well. First of all, as an analog watch it works nicely. Easy to read hands, along with a small hour marker scale on the inside. There is also the newer titanium rotating bezel and crown. matching the black bezel and crown are black crown guards and a black strip on the left side of the case. 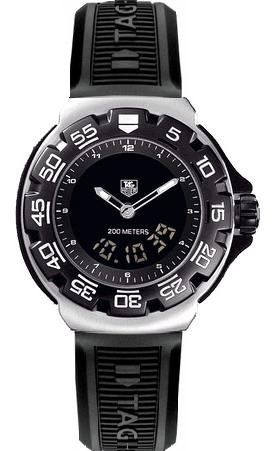 The case itself is 42mm wide in steel, and came on Tag Heuer’s nice looking F1 bracelet or at least two rubber strap options. Like all F1 watches, the case has a sapphire crystal and was water resistant to 200 meters. Functionally the digital part of the movement probably had a calendar, stopwatch, alarm, and second timezone. Perhaps more features as well. The lack of a ticking seconds hand was a good move on Tag’s part.

Tag Heuer watches like this are interesting, and I think this model was a bit on the rare side. At least I didn’t see many of them. But it is cool, and people wanting a highly functional timepiece with Tag Heuer styling can easily look here. Original price was about $1,100 retail, but available ones are less if you can find them online.