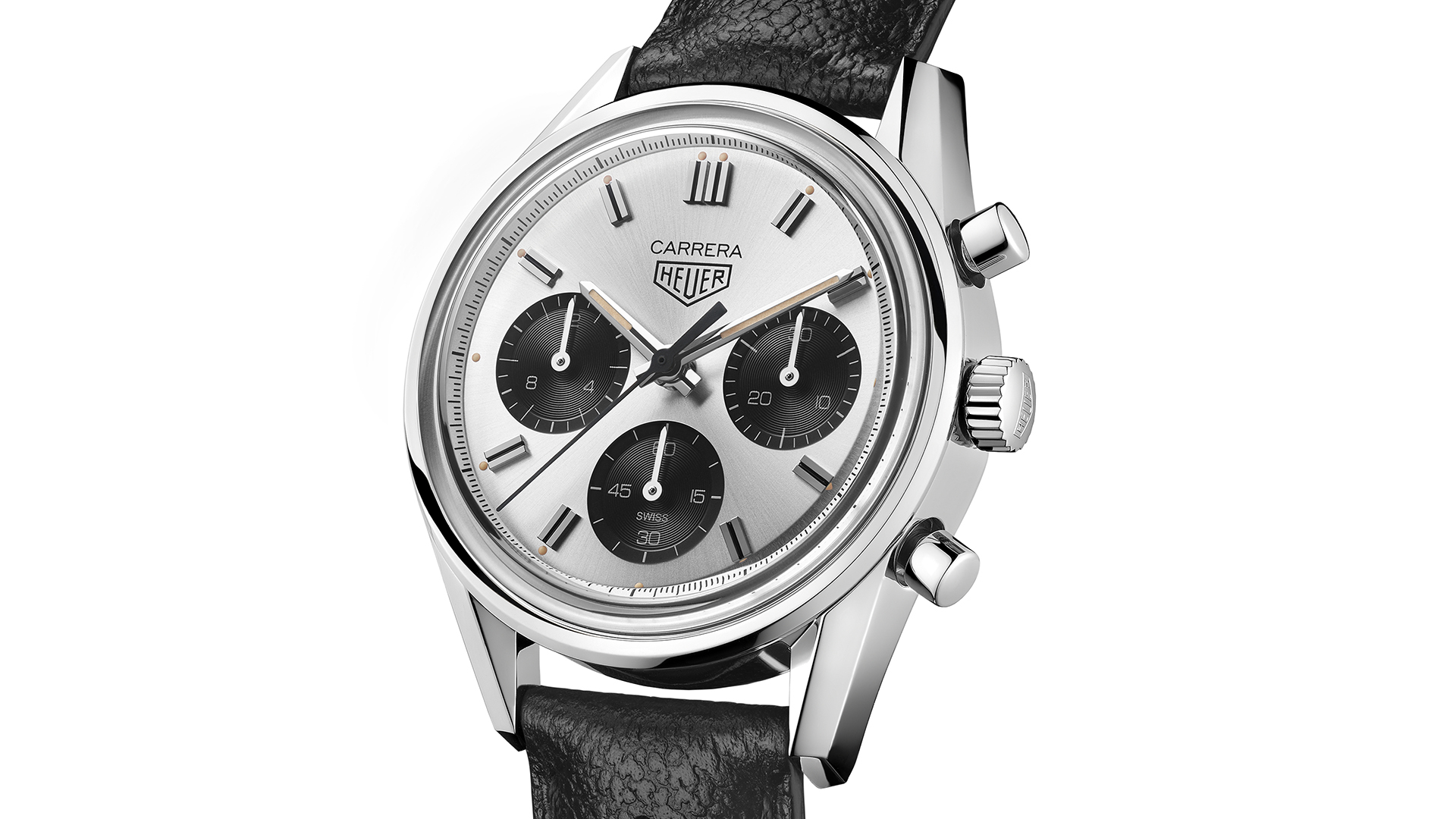 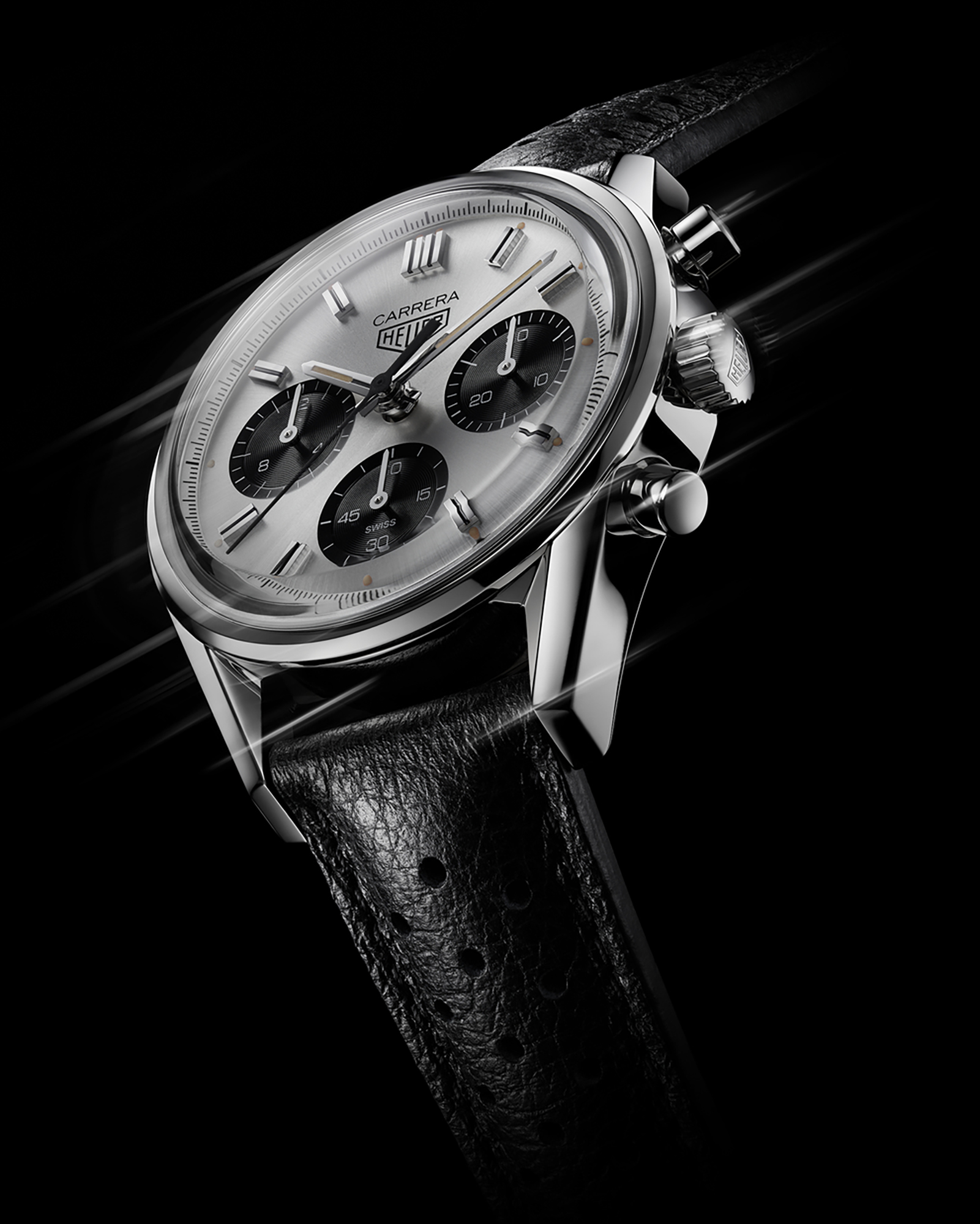 2023 is shaping up to be a banner year for commemorative releases. This year represents key anniversaries for some of the most important and beloved collections in all of watchmaking, but one of the highest-profile milestones of the year belongs to the TAG Heuer Carrera. 2023 marks 60 years since the birth of TAG Heuer’s most refined chronograph collection, and to celebrate this achievement the brand returns to the roots of the series to recreate one of the most sought-after vintage Carrera references of all – the first-generation Heuer Carrera 2447 SN of the late ‘60s. The new limited edition TAG Heuer Carrera Chronograph 60th Anniversary may not push the boundaries of the brand, but plays on the strengths of recent vintage-inspired Carrera releases to deliver a deft tribute to 60 years of the series with handsome proportions, a classic panda colorway, and robust in-house performance.

Fans of the brand are likely to recognize the TAG Heuer Carrera Chronograph 60th Anniversary’s 39mm-wide stainless steel case. This is the same vintage-inspired case layout the brand has used for all its retro-style Carrera releases in recent years and closely follows the original Carrera design template with its signature inwardly beveled lugs, sleek case profile, and elegantly narrow polished bezel. This fully polished case may be decidedly larger than the original 36mm-wide Carrera design, but it solidly updates the original Carrera ethos for the modern era while retaining the classic Heuer signature on its 3 o’clock crown. The largest concession to modernity here comes with the sapphire display caseback, featuring an engraved limited edition serial number and a broad aperture for viewing the decorated in-house movement. As with the rest of the vintage-inspired Carrera family, the Carrera Chronograph 60th Anniversary provides a respectable 100 meters of water resistance. 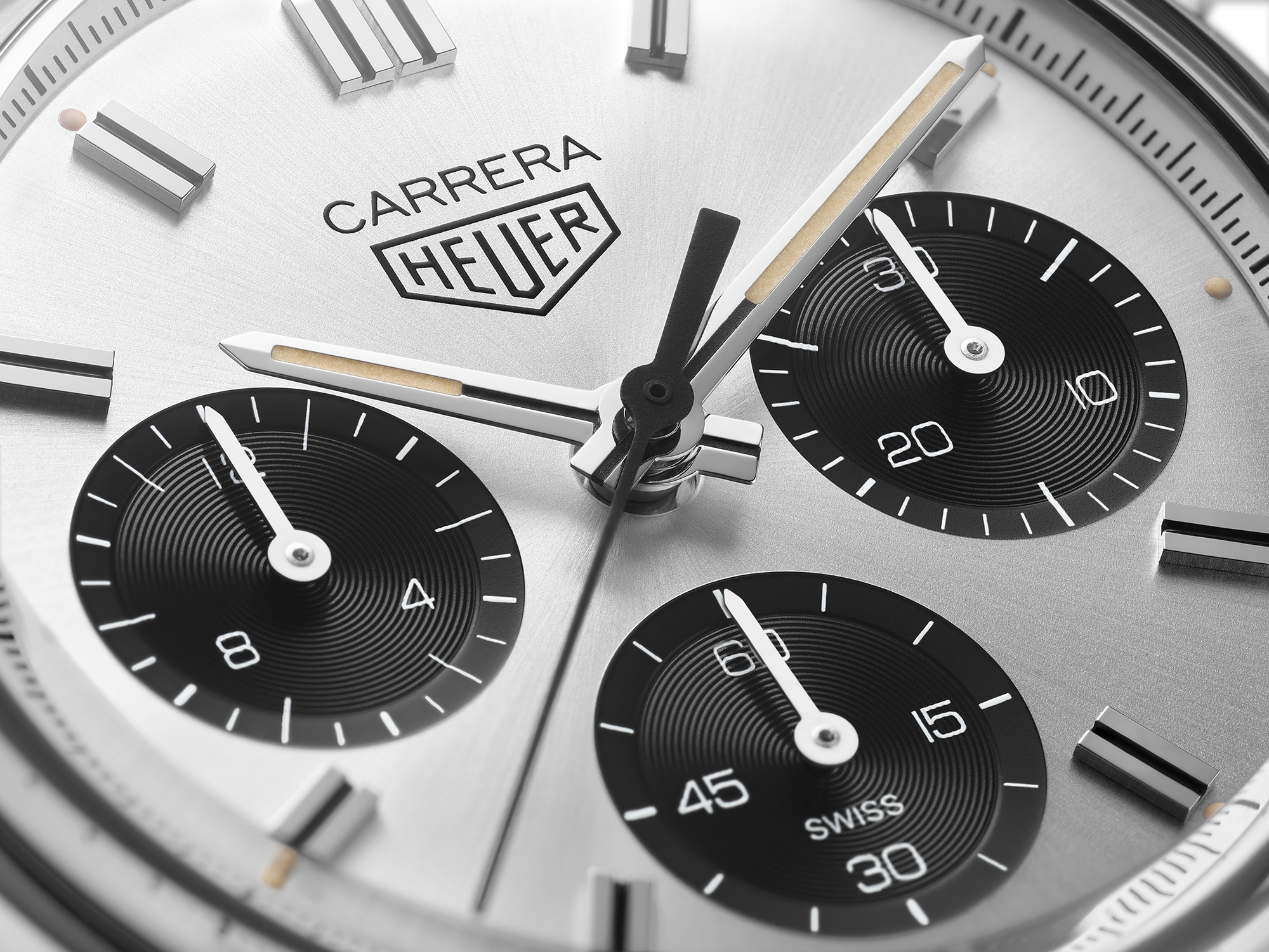 TAG Heuer offers an impressively faithful recreation of the original Carrera 2447 SN with the dial of the Carrera Chronograph 60th Anniversary. The only major visual shift from the ‘60s original in images is the swapping of the chronograph hours and minutes subdials – this new model features a 12-hour subdial at 9 o’clock, rather than at the original’s 3 o’clock placement. Obviously, this is a concession to the modern Heuer 02 movement architecture, but virtually everything else under the sapphire crystal accurately echoes the look of its ‘60s forebear. Everything from the beveled rectangular indices to the line weight of the 12 o’clock printed Carrera logo follows the original 2447 SN formula, and the resulting look is clean and timeless in photos. The main silver sunburst dial surface offers a deep, nuanced grain texture in initial images, creating detailed highlights and shadows around the dial. The panda-style black subdials at 3 o’clock, 6 o’clock, and 9 o’clock add further complexity to the simple layout with azurage texturing, while the lume plots atop the pointed baton hands and surrounding the indices are rendered in a warm (and potentially divisive) khaki fauxtina tone. Like the first-generation Carrera that inspired it, the stylistic focus of the Carrera Chronograph 60th Anniversary’s dial is minimalism, balance, and legibility, and it largely succeeds in this goal with an open, well-proportioned no-date layout. 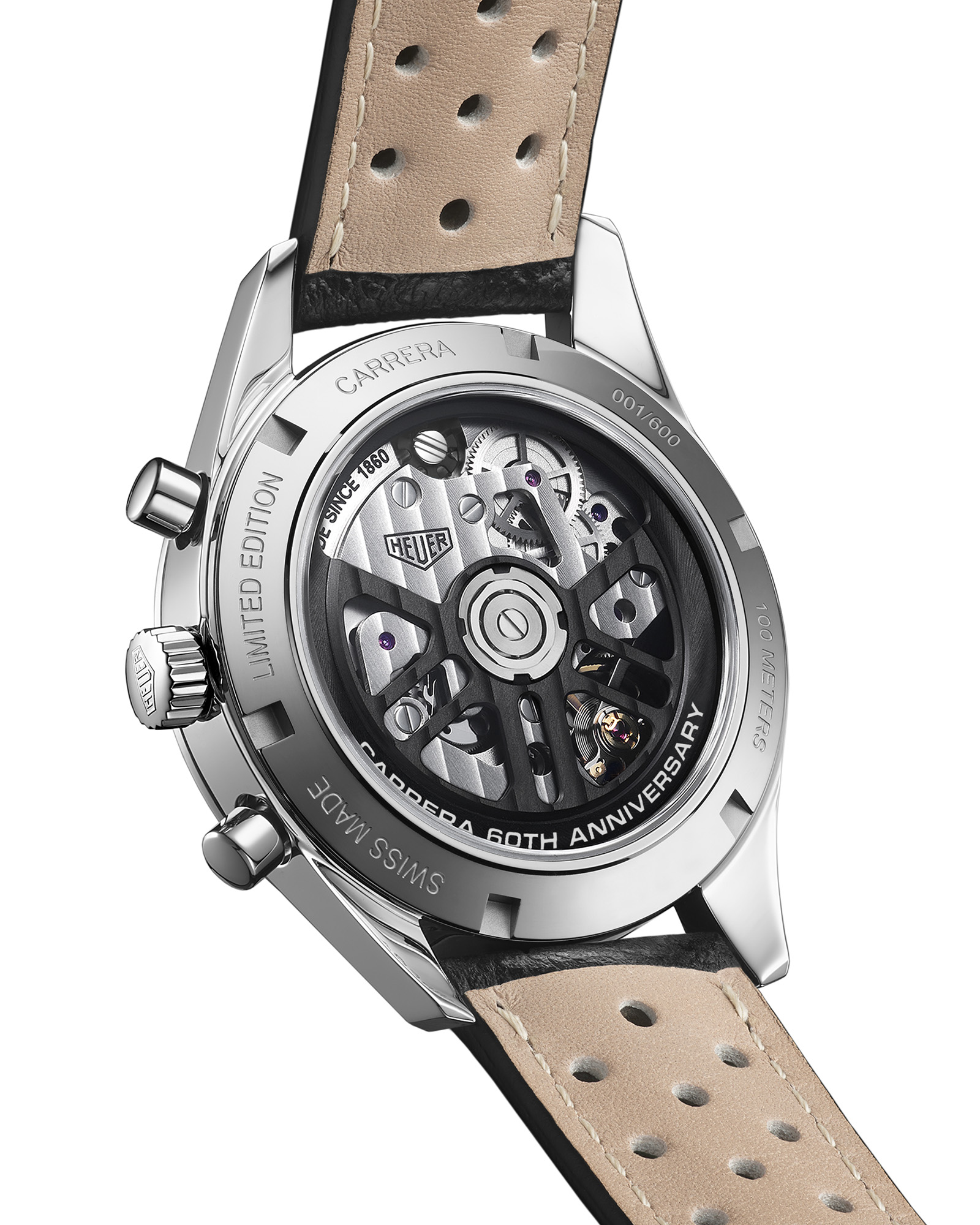 TAG Heuer powers the Carrera Chronograph 60th Anniversary with its in-house Heuer 02 automatic chronograph movement. The Heuer 02 has earned its place as the go-to powerplant for the brand’s higher-end chronograph offerings over the past few years and establishes TAG Heuer as a front-runner in its segment with a column wheel and vertical clutch chronograph actuation system paired to a hefty 80-hour power reserve at a 28,800 bph beat rate. The Heuer 02’s finishing is consistent with its appearances across the classic-style Carrera lineup, including Côtes de Genève across the skeleton bridges, an engraved Heuer badge, a black-coated wheel-style skeleton rotor featuring additional Côtes de Genève, and a black-coated column wheel to highlight the chronograph complication in action. To complete the vintage-inspired look, TAG Heuer fits the Carrera Chronograph 60th Anniversary with a classic black leather strap featuring rally-style perforations. 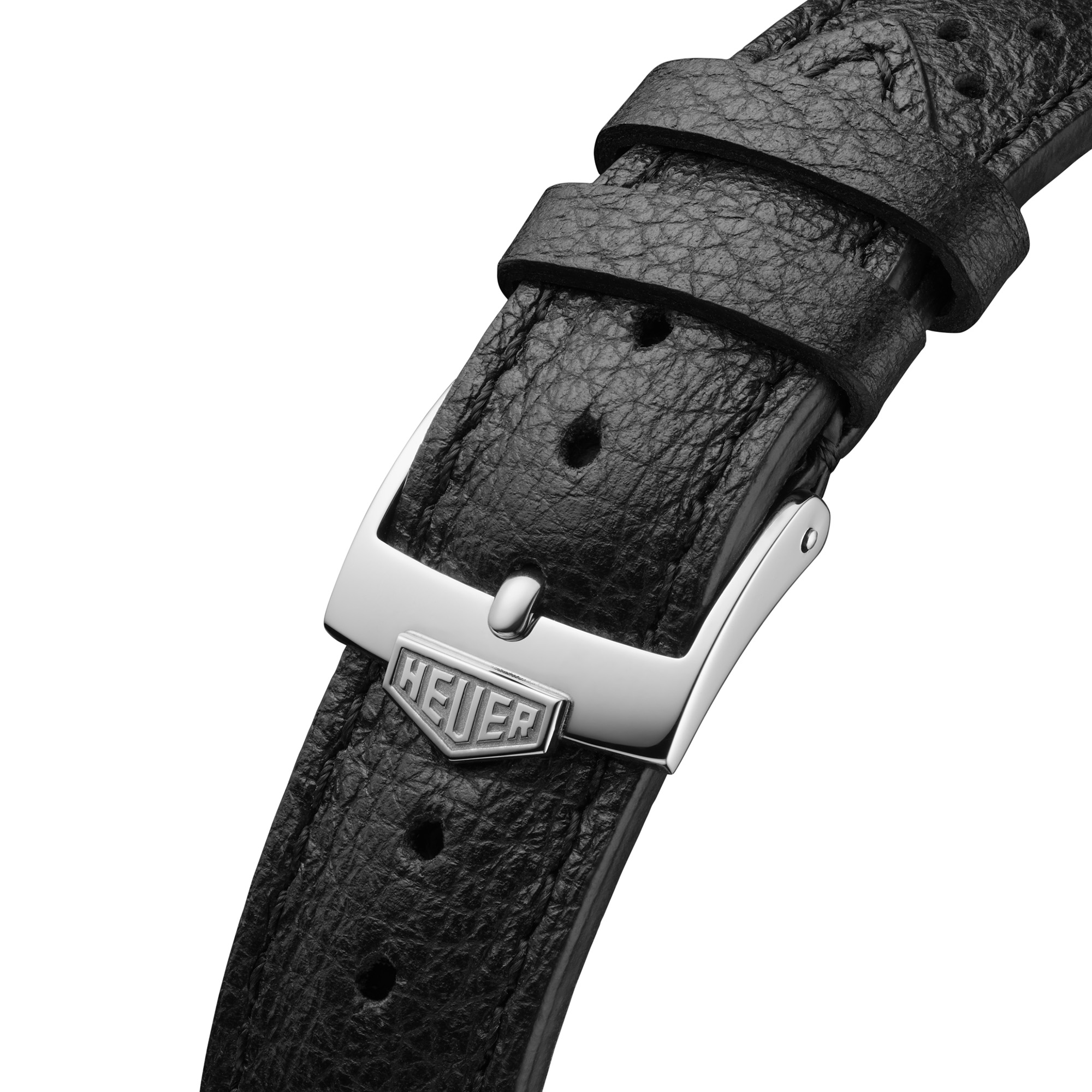