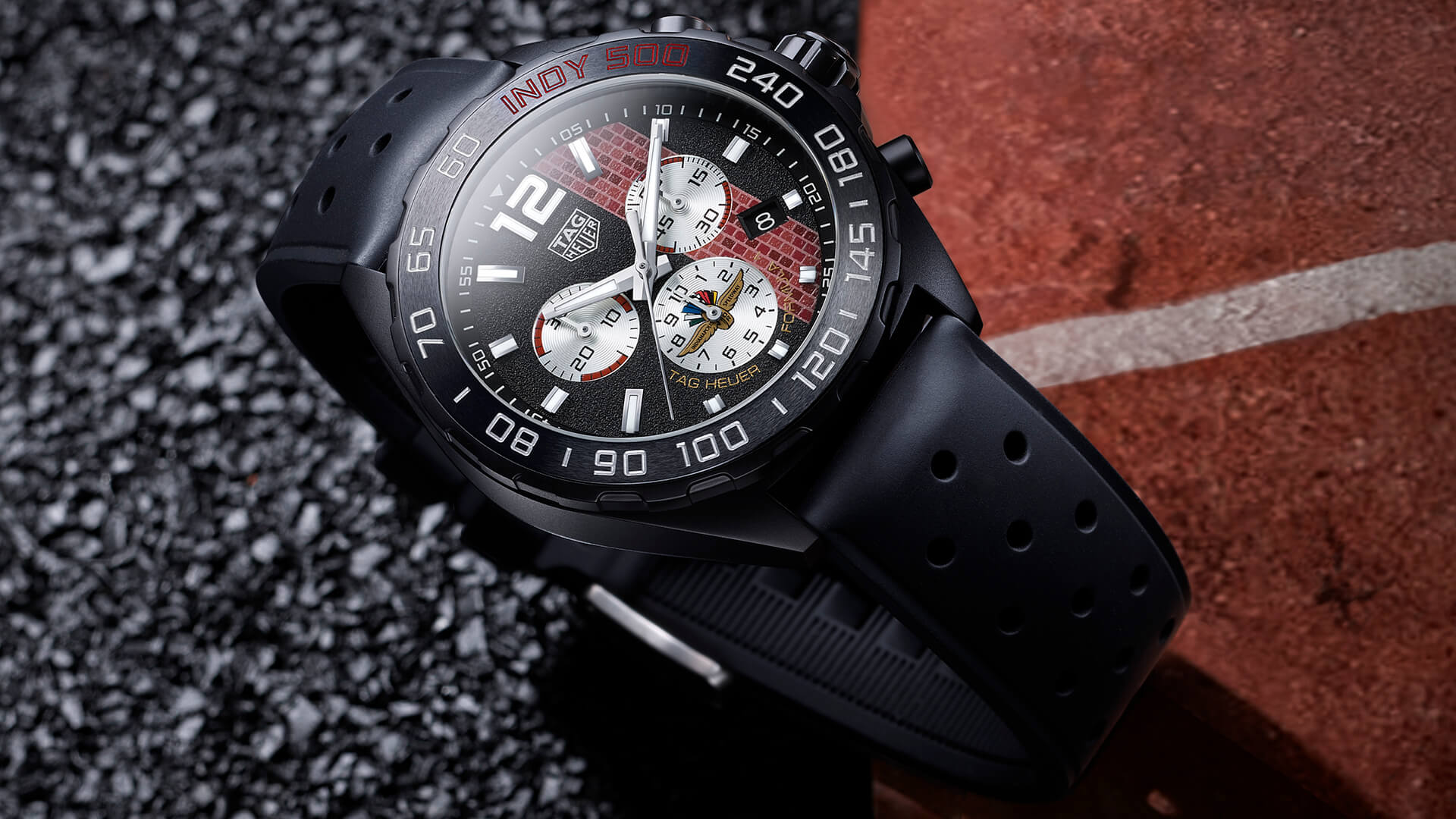 When it comes to motorsports, no watch brand has deeper or more extensive roots than TAG Heuer. Among its wealth of partnerships across Formula 1, Formula E, and the World Endurance Championship, TAG Heuer also holds a close sponsor relationship with the world’s most famous race – the Indianapolis 500. The brand has produced special edition pieces commemorating the Indy 500 and the IndyCar series for years, and while this year’s Indy 500 was pushed from its traditional Memorial Day Sunday in May to August 23, the enthusiasm behind the race is no less fervent. To celebrate the 104th running of this historic event, TAG Heuer has once again developed a bold, distinctive limited edition model. The TAG Heuer Formula 1 Indy 500 2020 Special Edition offers a textured, dynamic dial treatment along with an aggressive modern colorway and quartz accuracy.

The 43mm stainless steel case of the standard quartz Formula 1 chronograph forms the base for the Formula 1 Indy 500 2020 Special Edition, but TAG Heuer immediately sets this one apart visually with a stealthy bead blasted black DLC finish throughout. This matte black finish helps to alleviate some of the visual bulk of this design, while still allowing the chunky tachymeter bezel to stand out. The insert here is sandblasted black ceramic, with the Formula 1’s usual bold numerals augmented by a deep red “Indy 500” inscription at 1 o’clock. The caseback also receives a special Indy 500 engraving, but interestingly the etching still references the original cancelled date of May 24. Time will tell if this will lend these collector’s appeal down the road, but already this makes for an interesting historical oddity. Like its more common stablemates, this case is still remarkably watertight for a chronograph with a 200 meter rating. 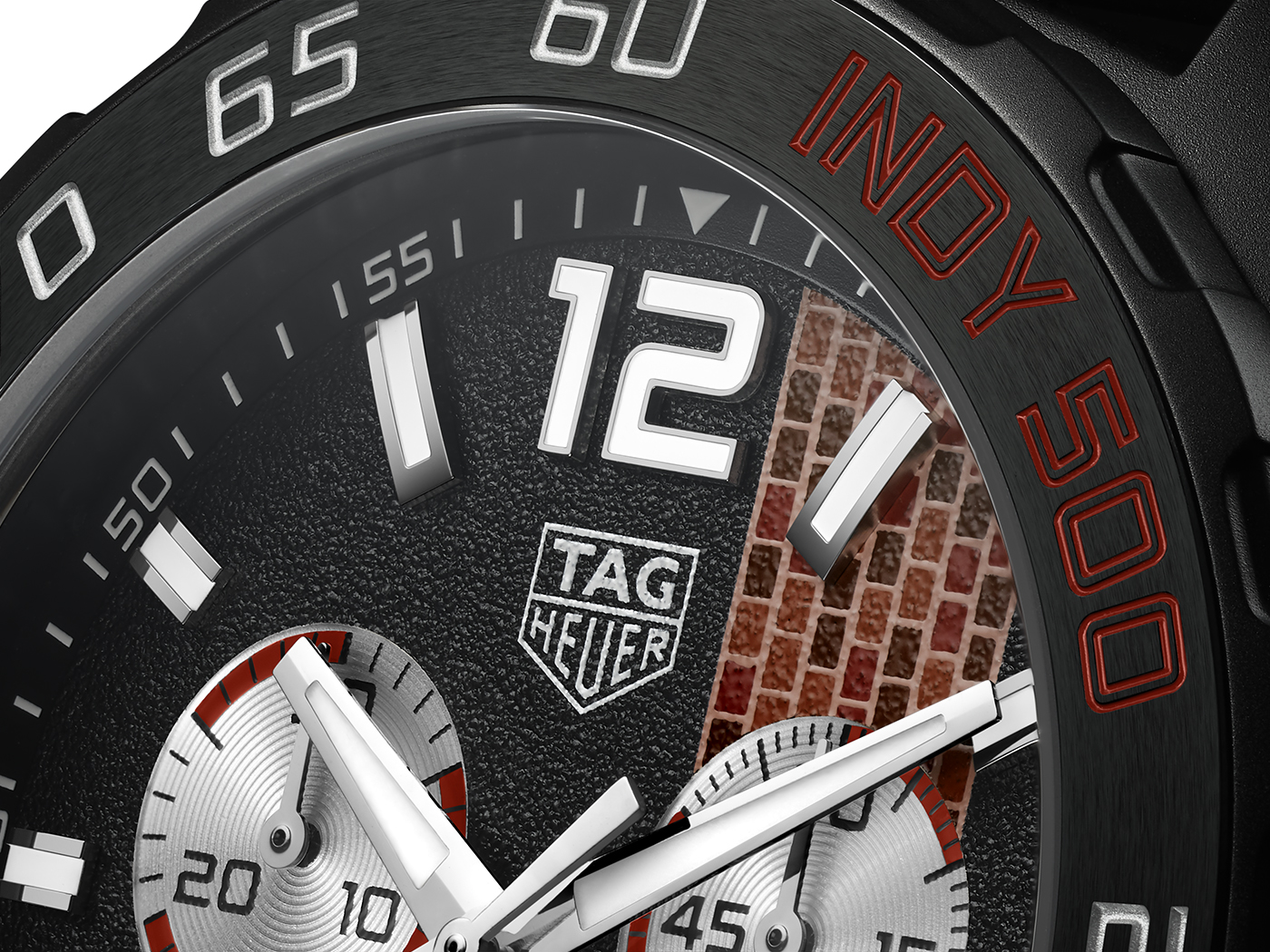 The most fascinating element of the dial for the TAG Heuer Formula 1 Indy 500 2020 Special Edition is not the bold and graphic color treatment, it’s the use of texture to convincingly produce the treatment’s effect. For those not in the know, the Indianapolis Motor Speedway is known to racing fans across the world as “The Brickyard” due to its original brick and mortar track surface, and while the track has long since been paved over with asphalt the start/finish line is still surrounded by a strip of bricks one yard wide as a tribute to history. One of the Indy 500’s proudest traditions is the custom of the winner kissing those bricks at the starting line after the race, adding even more mystique to that iconic strip of exposed masonry. This new Formula 1 vividly depicts that line of bricks cutting through the 3 o’clock side of the dial for a dramatic effect, but while this patterned racing stripe would be dramatic on its own the surfacing of the dial elevates it to the next level. The black main dial surface is heavily grained in a convincing depiction of asphalt, while the thicker paint on the brick stripe softens this effect somewhat for a more brick-like visual texture. It’s a dramatic visual cue that surely won’t be to everyone’s taste, but it’s a nicely rendered tribute to one of the most famous racetracks on earth. With that in mind, however, the date window at 4 o’clock may prove to be even more controversial as it drastically alters the overall visual weight distribution. 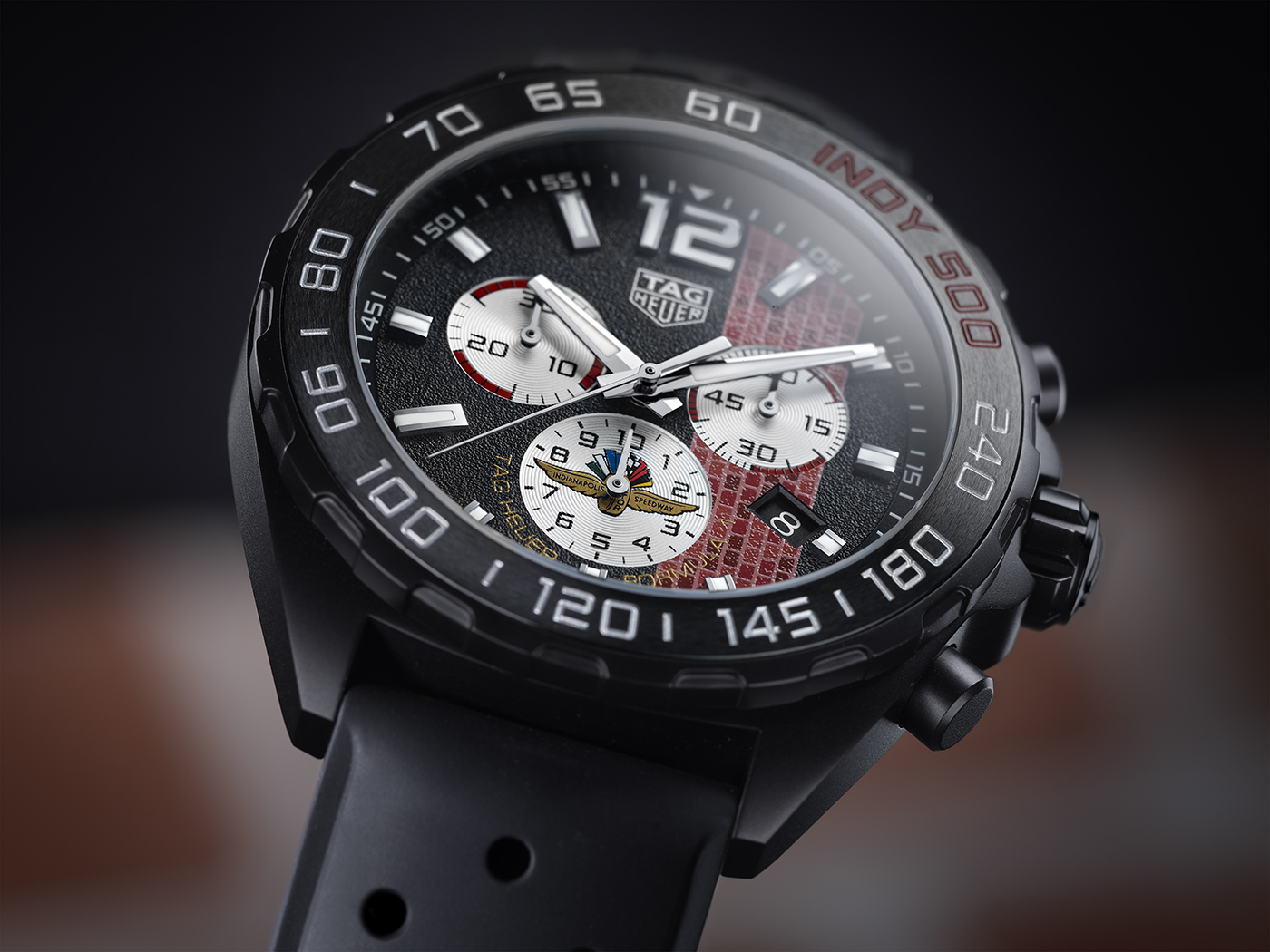 The rest of the dial design is more orthodox, with all three subdials featuring a silver azurage treatment to ensure the mostly matte watch is not completely devoid of light play at changing angles. Likewise, the tapering baton hands, and bold applied mix of indices and Arabic numerals maintain the same polished sheen as other Formula 1 iterations. The subdials themselves also harbor a few bespoke visual cues, with partial scales for both the running seconds and chronograph minutes accented in an appropriate deep shade of brick red. The 6 o’clock 1/20 second subdial adds another pop of detail and color with the finely rendered emblem of the Indianapolis Motor Speedway. 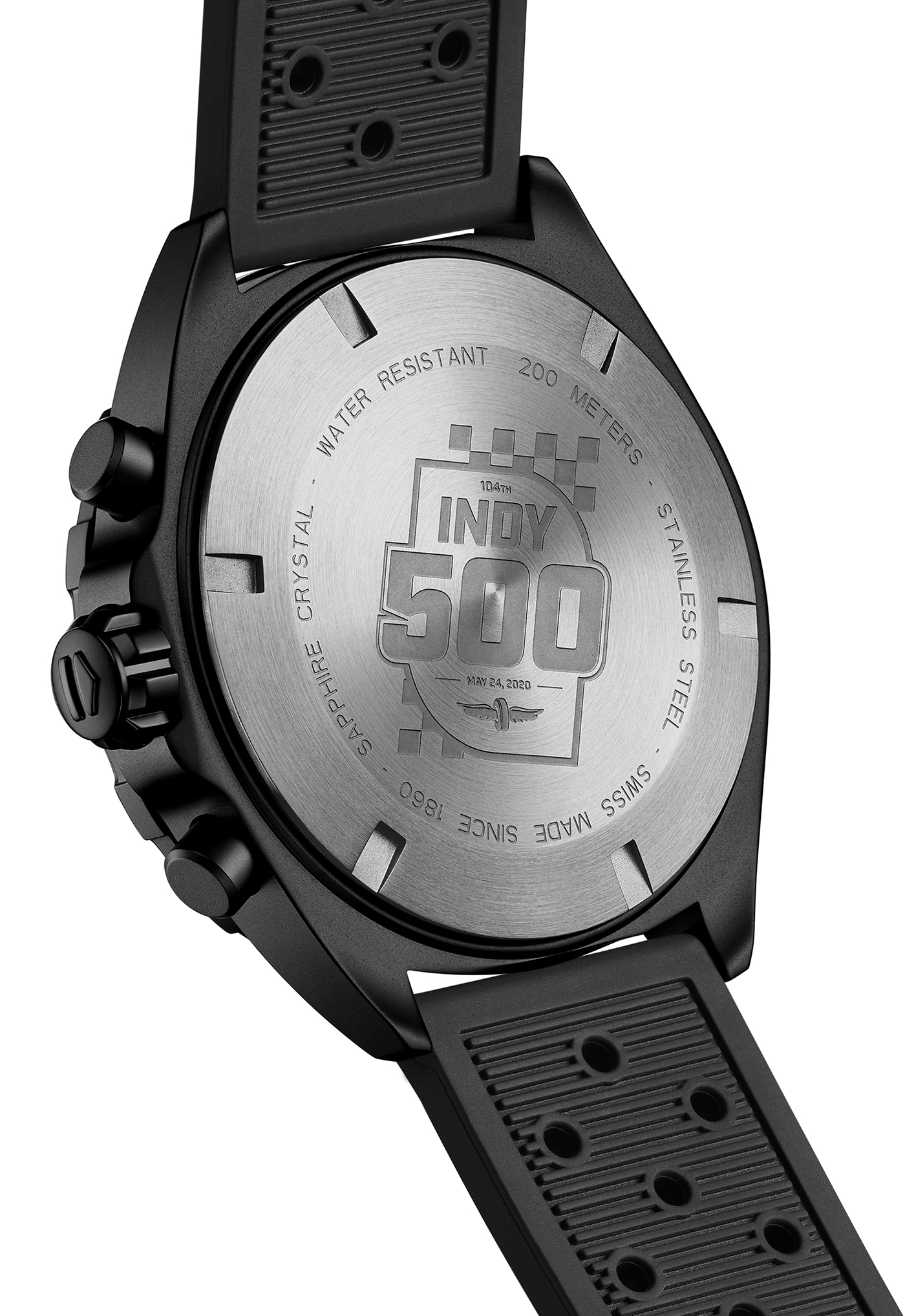 TAG Heuer provides very few details surrounding the quartz chronograph movement that powers the Formula 1 Indy 500 2020 Special Edition. As a quartz movement though, it does offer certain advantages in accuracy and durability, even if it might lack the cache of a mechanical powerplant. In addition, this movement has proven itself reliable across much of the Formula 1 range over the past several years. 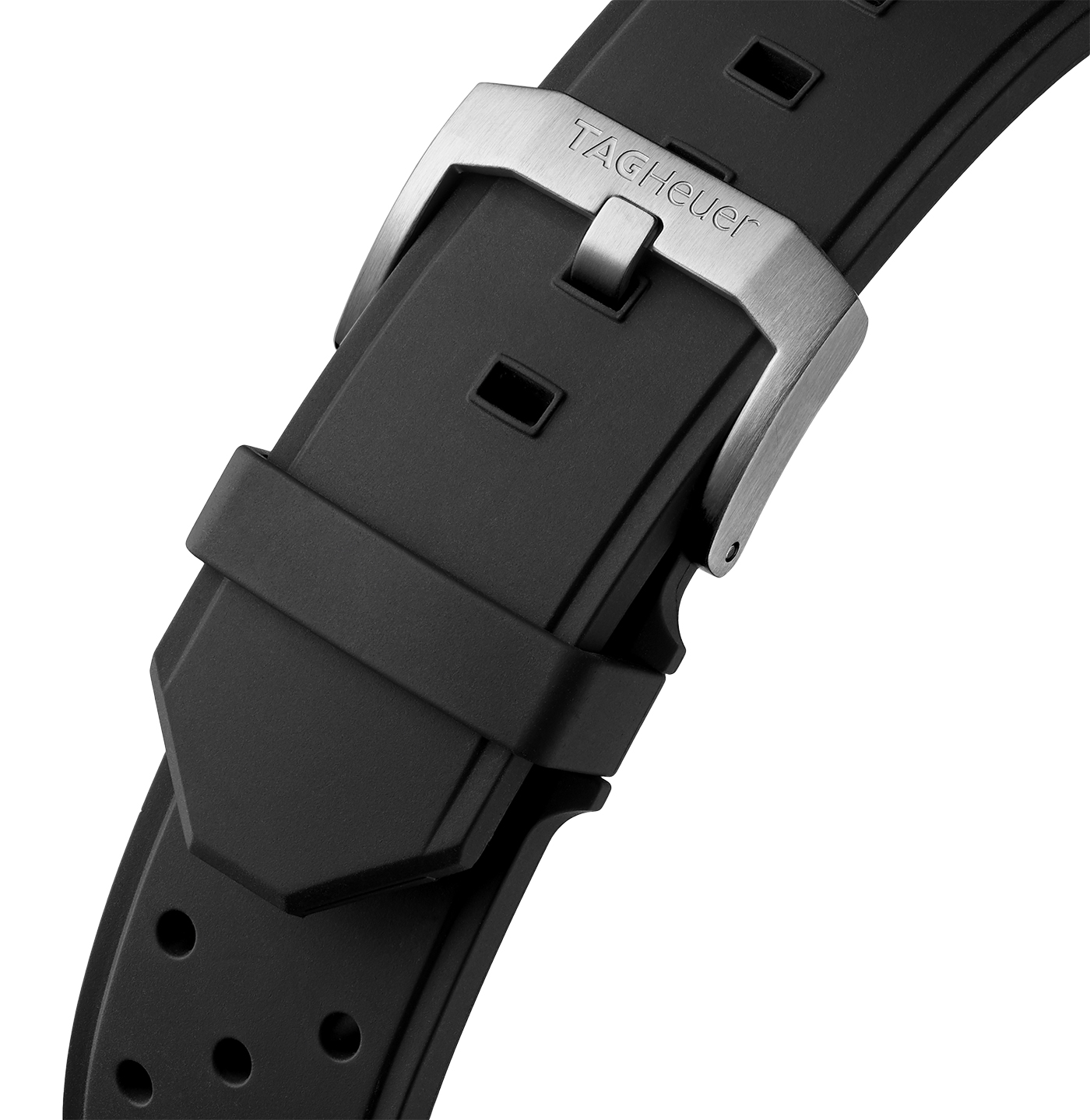 The TAG Heuer Formula 1 Indy 500 2020 Special Edition is paired with a rubber lined black leather rally strap. Combining the best elements of a rally and tropic strap, this is a versatile strap option that maintains the aggressive matte black color scheme with a modern motorsports twist. 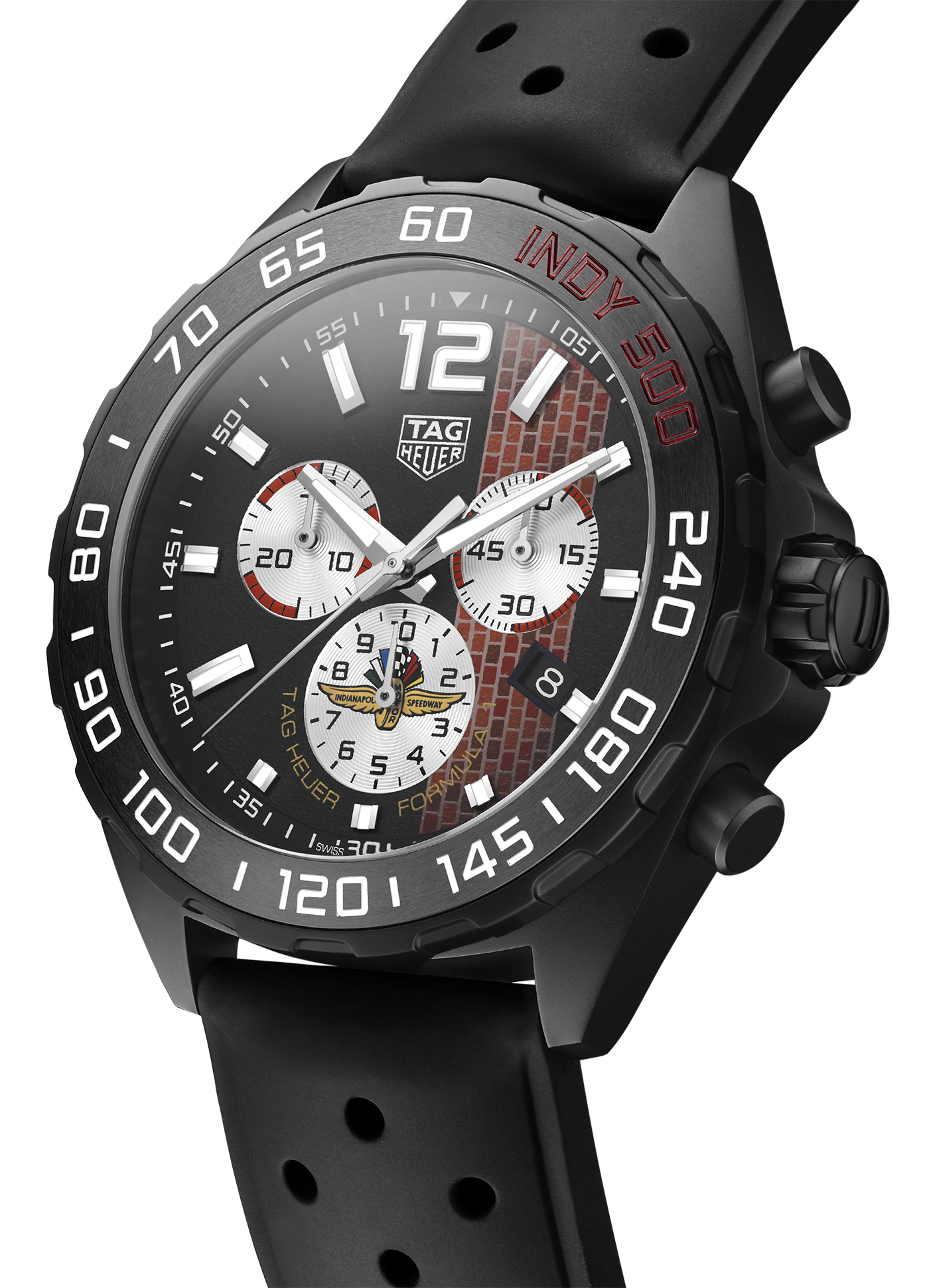 TAG Heuer’s aggressive graphical take on its 2020 Indy 500 tribute may alienate some enthusiasts, but the finishing and details help to make this a clever visual homage to one of racing’s biggest events. Only 1,500 examples of the TAG Heuer Formula 1 Indy 500 2020 Special Edition will be made, available now through authorized dealers at an MSRP of $2,050. For more information, please visit the brand’s website.