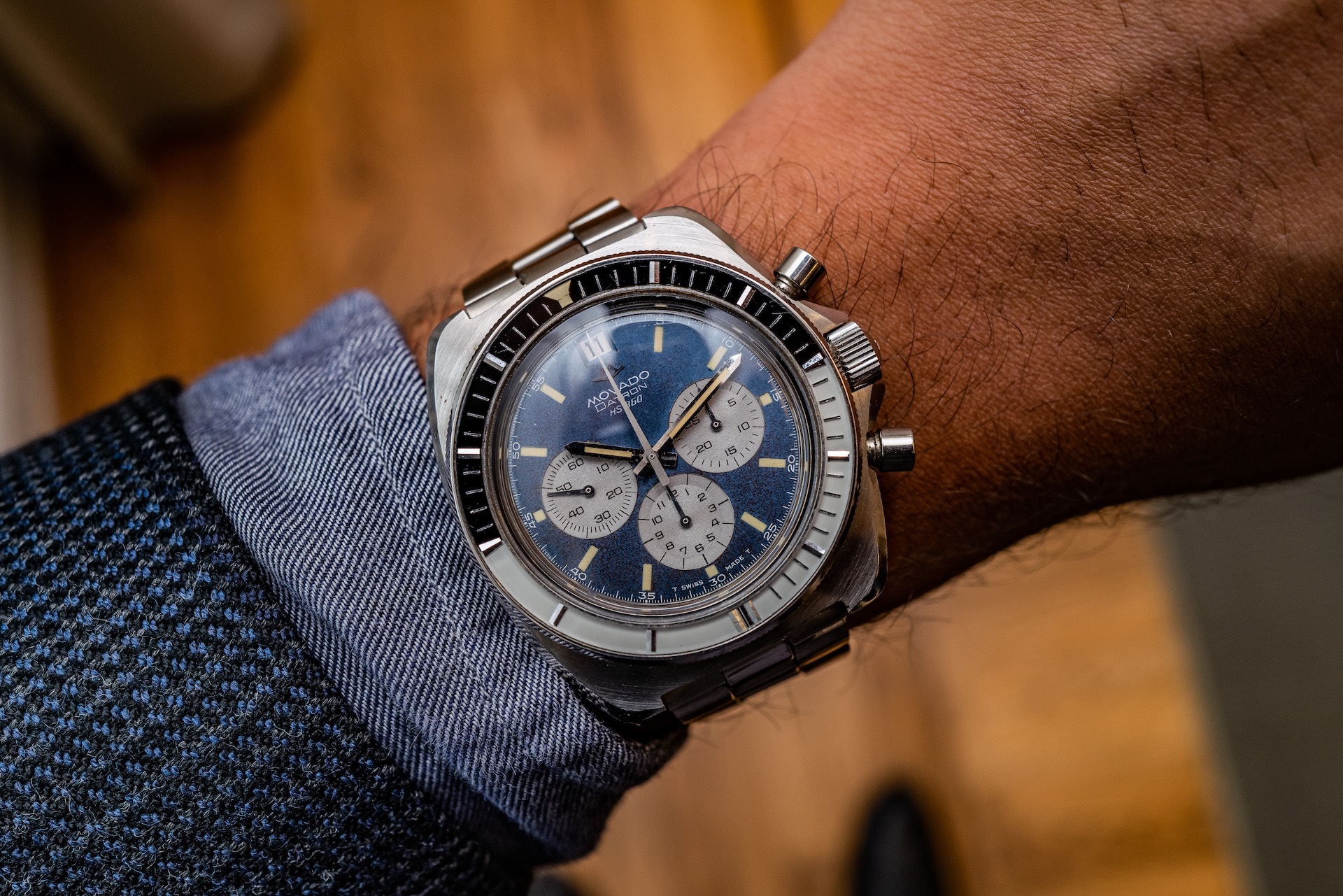 The Seven Vintage Watches That Changed How I See Movado

Modern Movado is almost synonymous with the Museum dial watch. It’s a design that’s almost universally recognizable (Hey, a Supreme Court Justice wears one). However, when flipping through “The Movado Book,” I found watch after watch from 1940-1970 that I was really drawn to. It took some organizing and back and forth, but I managed to get my hands on seven of these vintage Movado watches that lived up to all the photos I found. There is a world timer, a few calendar watches, and some chronographs that range from solid gold to the “Chronodivers” that give any iconic chronograph a run for its money.

Without further ado, let’s take a look at the seven vintage Movado watches that I think are criminally underrated: 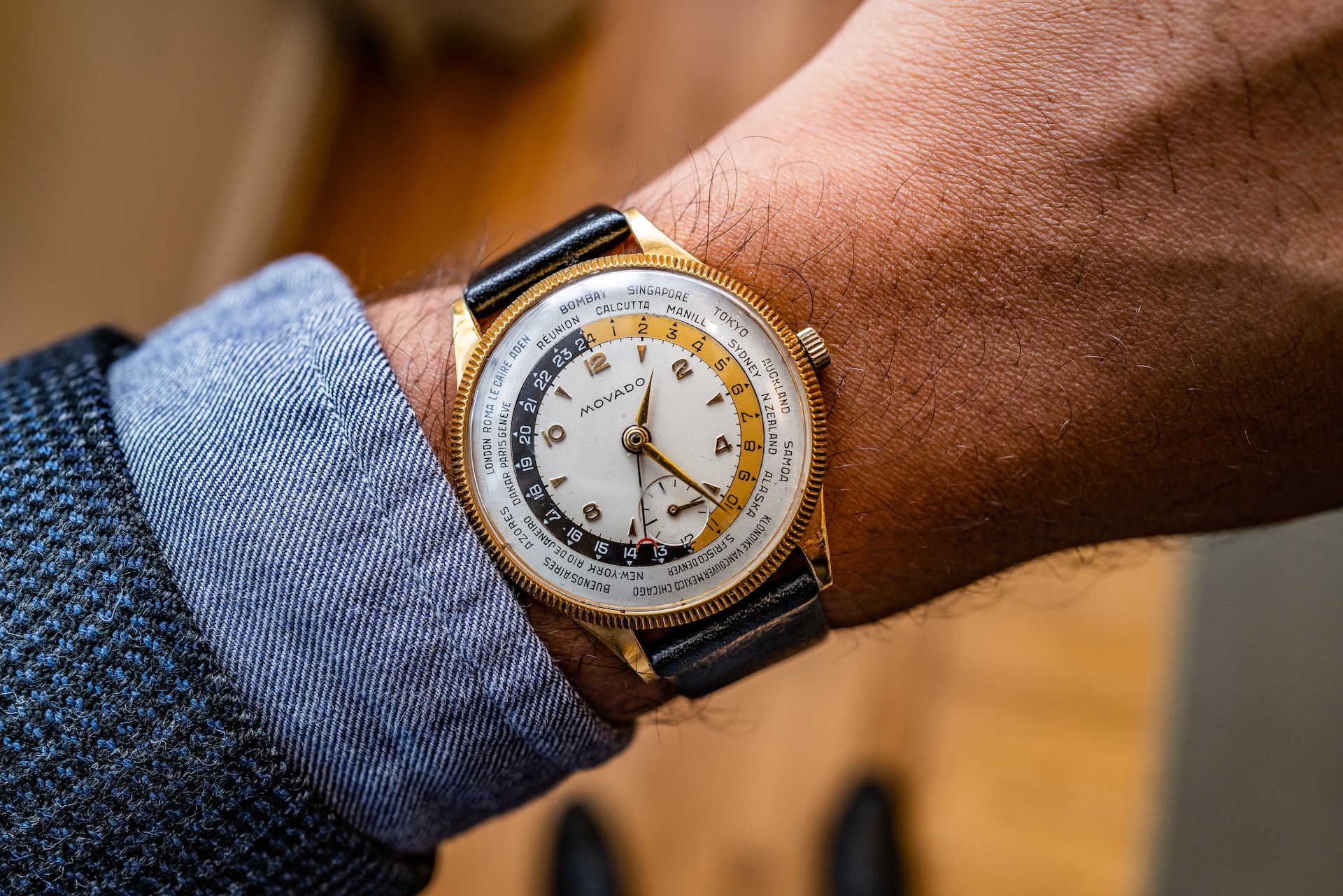 While these are in no particular order, I did have to start with the watch I was most tempted to abscond with. The Movado “Polygraph” World Time was done in gold or steel (which is the Ref. 18150 1167395) and introduced in 1950. In a 37mm-wide case, the Polygraph world time watch has a rotating bezel that is thin but easy to grip due to the deep milling done on it. Turning the bezel allows you to match the time zone of the desired city with the red crescent 24-hour hand.

The movement used on the Polygraph is the Cal. 129 and is actually patented by Movado. It takes the base Cal. 125 movement and adds the world time module to it. Movado produced this Cal. 129 from about 1950 through 1965, and this watch is one of the first to use it. The automatic movement measures just about 28mm-wide and 4.65mm-thin, has 17 jewels, and operates at 18,000 vph. 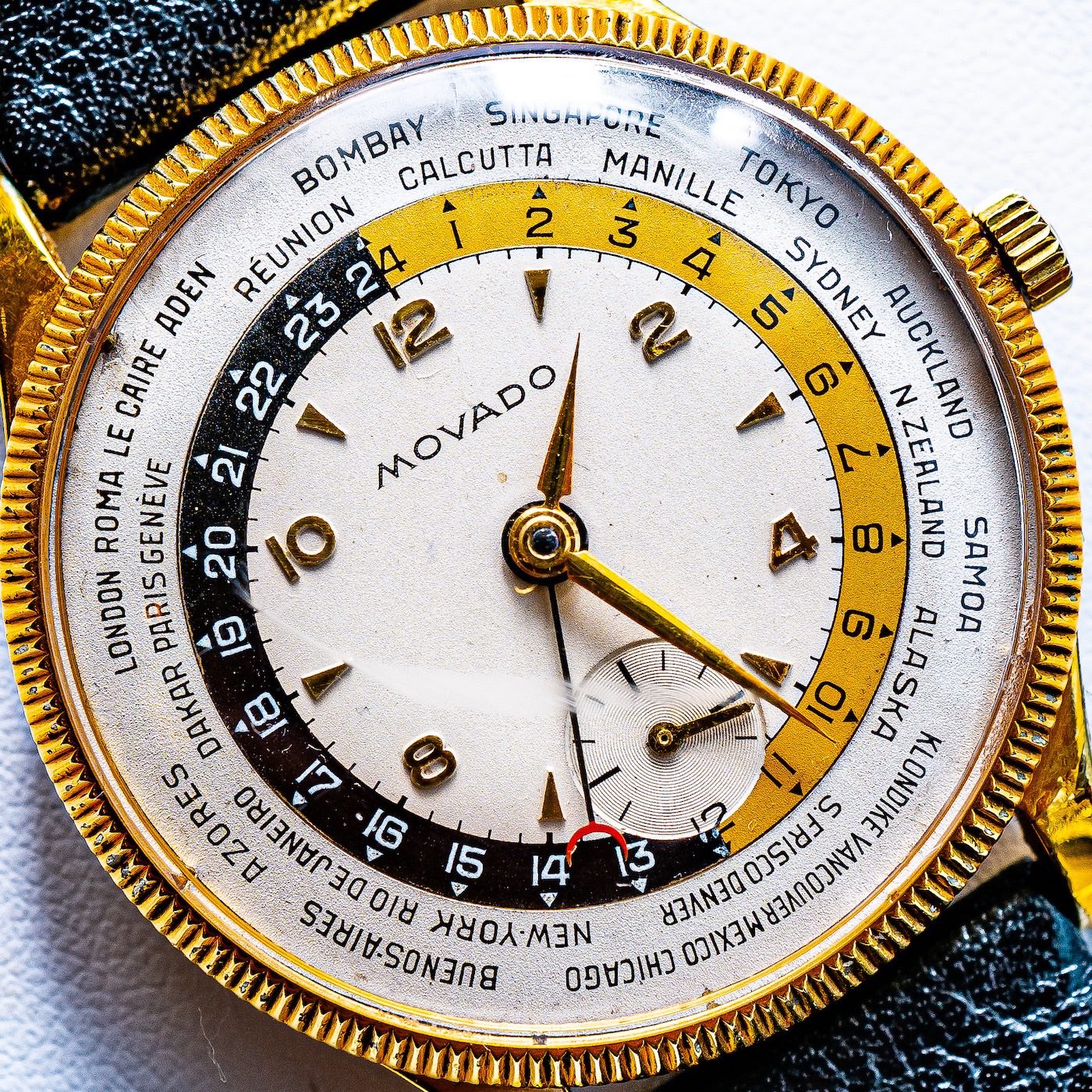 The contrast of the applied gold indices and hour markers with the orange/black 24-hour ring is what compelling design that doesn’t need to be obvious is all about for me. This kind of typography is my weakness, and this might top most contemporary world time watches out there. 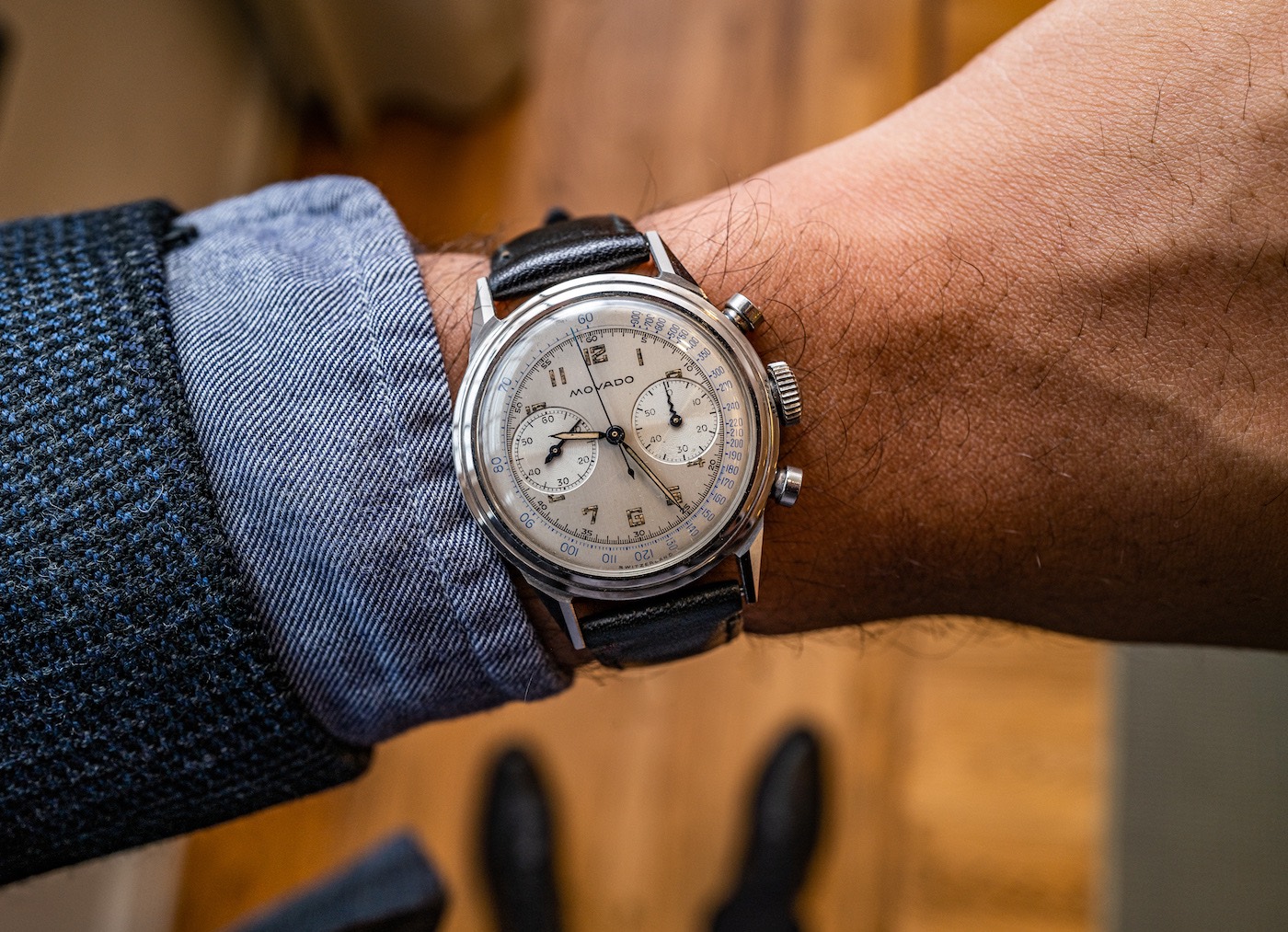 Something I was admittedly ignorant about was how Movado was behind one of the first split-seconds wristwatch chronographs in 1921 under the “Ralco” name. Just a fun fact I wanted to share, though the watch you see above wouldn’t come into being until 1940.

The manual Calibre 90 M chronograph movement was produced by Movado from 1938 through around 1965. The Calibre 90 M featured a 60-minute chronograph counter, 17-jewels, and was stamped with “Movado Factories” which you can see if you were to open a case back of one of these watches (alas, I didn’t get quite so intimate with the watches). Later would come the Calibre 95 M that added a 12-hour counter, but the Ref. A98611 19048 I’m talking about here has seconds and 60-minute sub-dials only. 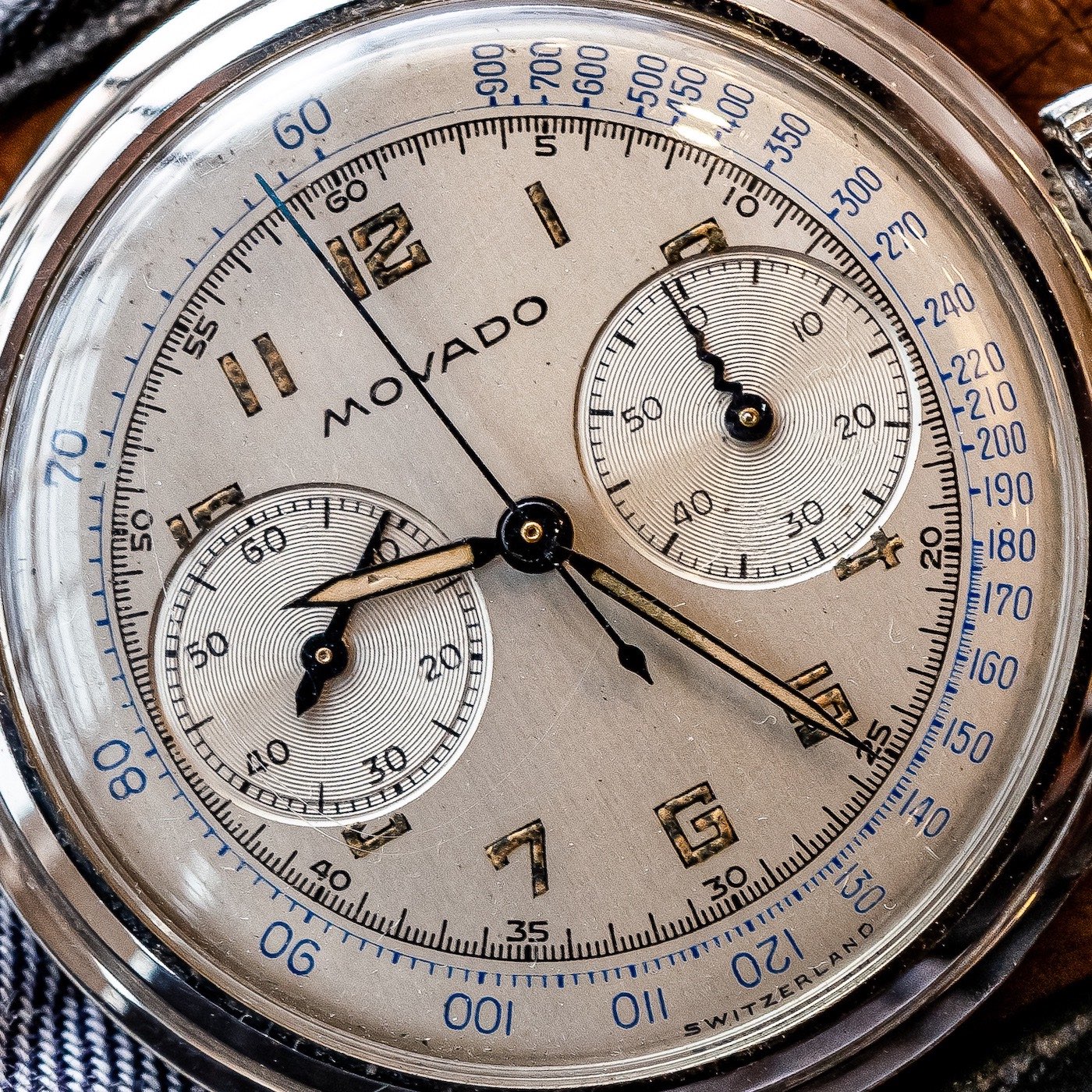 While on the topic of the 60-minute sub-dial, I can’t be the only person who is smitten with that squiggly hand. Steel case with silvered dial, the hands are blued with the hour and minute hands filled with lume. There are several other historic Movado chronographs I was also taken with, and maybe I’ll also share those in the future, but the Ref. A98611 19048 just about topped the list for me. 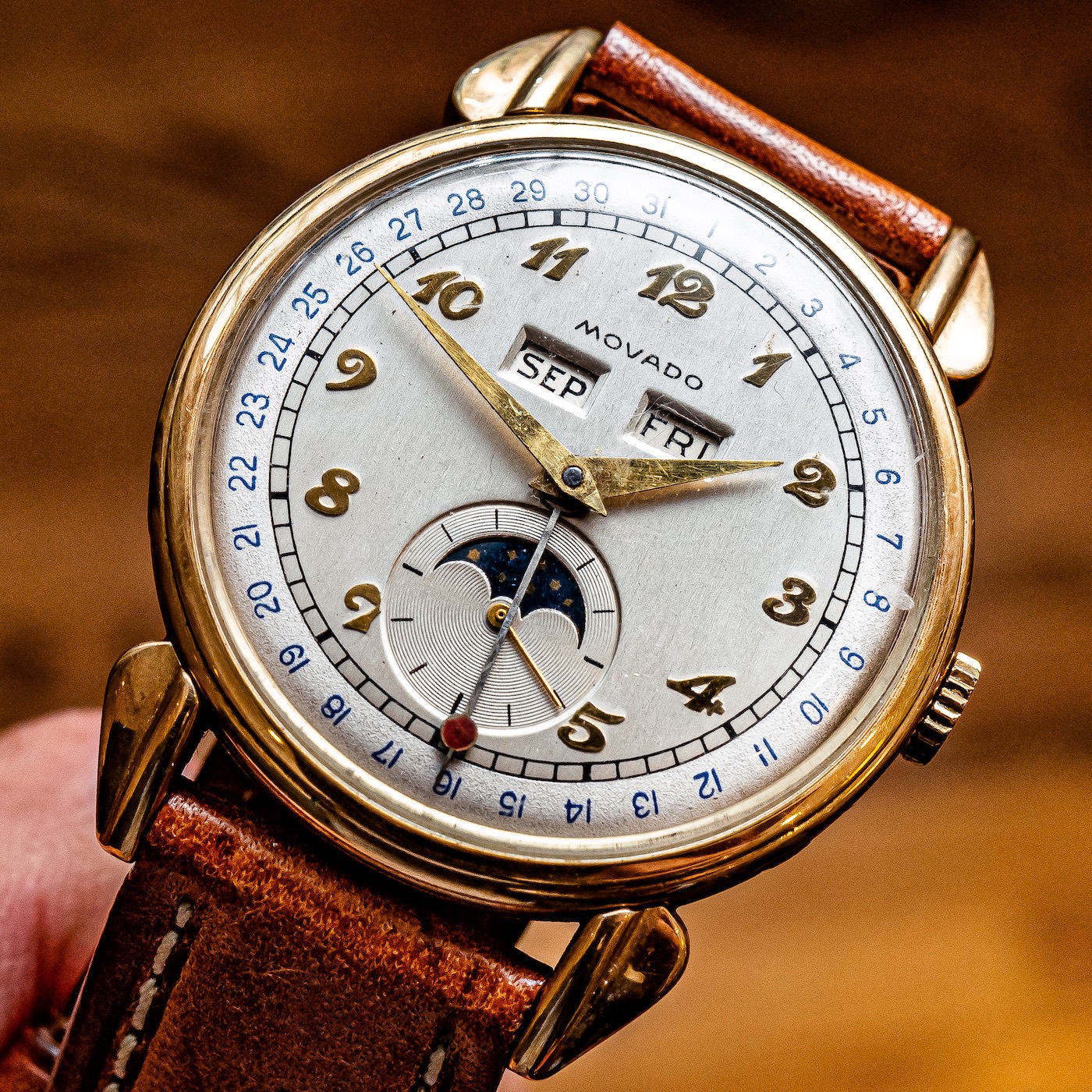 Movado produced quite a few calendar watches in the mid-20th century, first beginning to appear when their “Calendograph” movement was developed in 1945. These are some of Movado’s most well-known and desirable vintage watches, but I was fortunate to get my hands on two of these models. 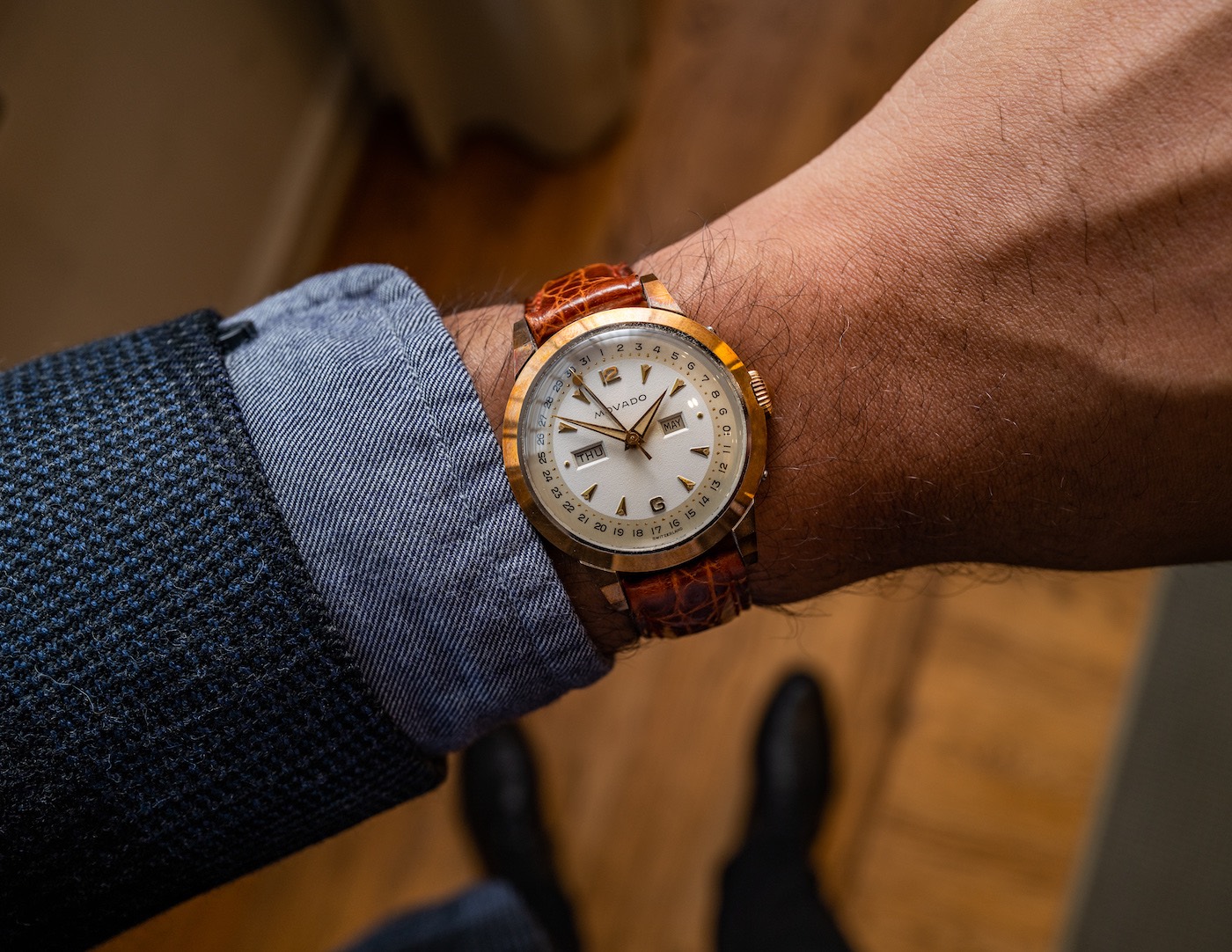 The Movado Calendograph D474007 14952 is the quintessential classic calendar watch from the many produced by the brand. I try not to use the word “elegant” so much, but it’s difficult to describe it in any other way. The proportions are right, the applied indices are a work of art, the flat bezel ties the whole thing together, and I love the uniformly gold color scheme extending even to the top of the lollipop date indicator hand. But, as with almost everything, it’s all about the little things. The font used on the outer date ring sparks much typographical joy for me. 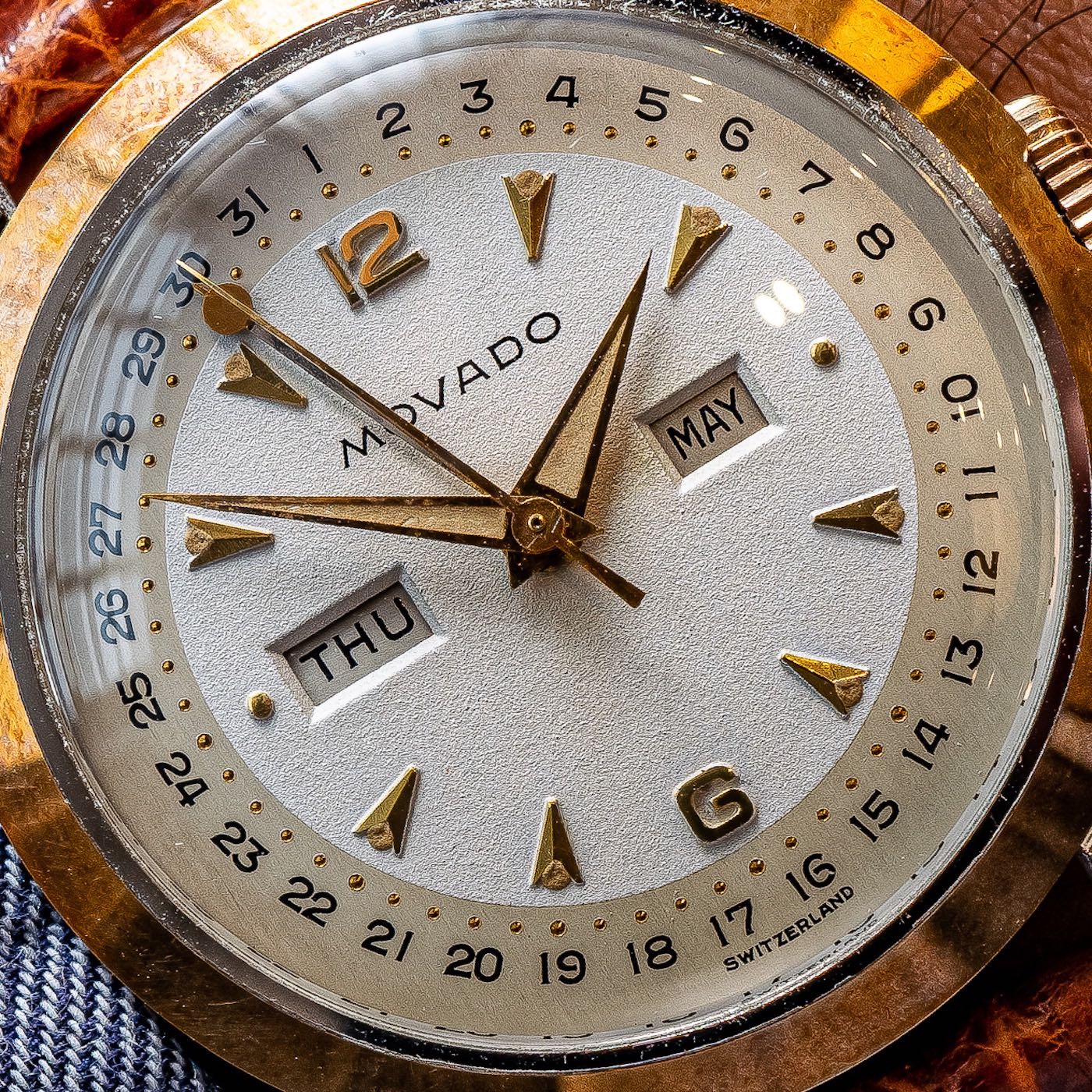 The Cal. 475 SC movement used here is the base Cal. 475 Calendograf movement (not to be confused with the watch’s name “Calendograph”) but with a central seconds hand, as opposed to a sub-dial. With 17 jewels and operating at 18,000 vph, this movement was produced between 1938 and 1954. 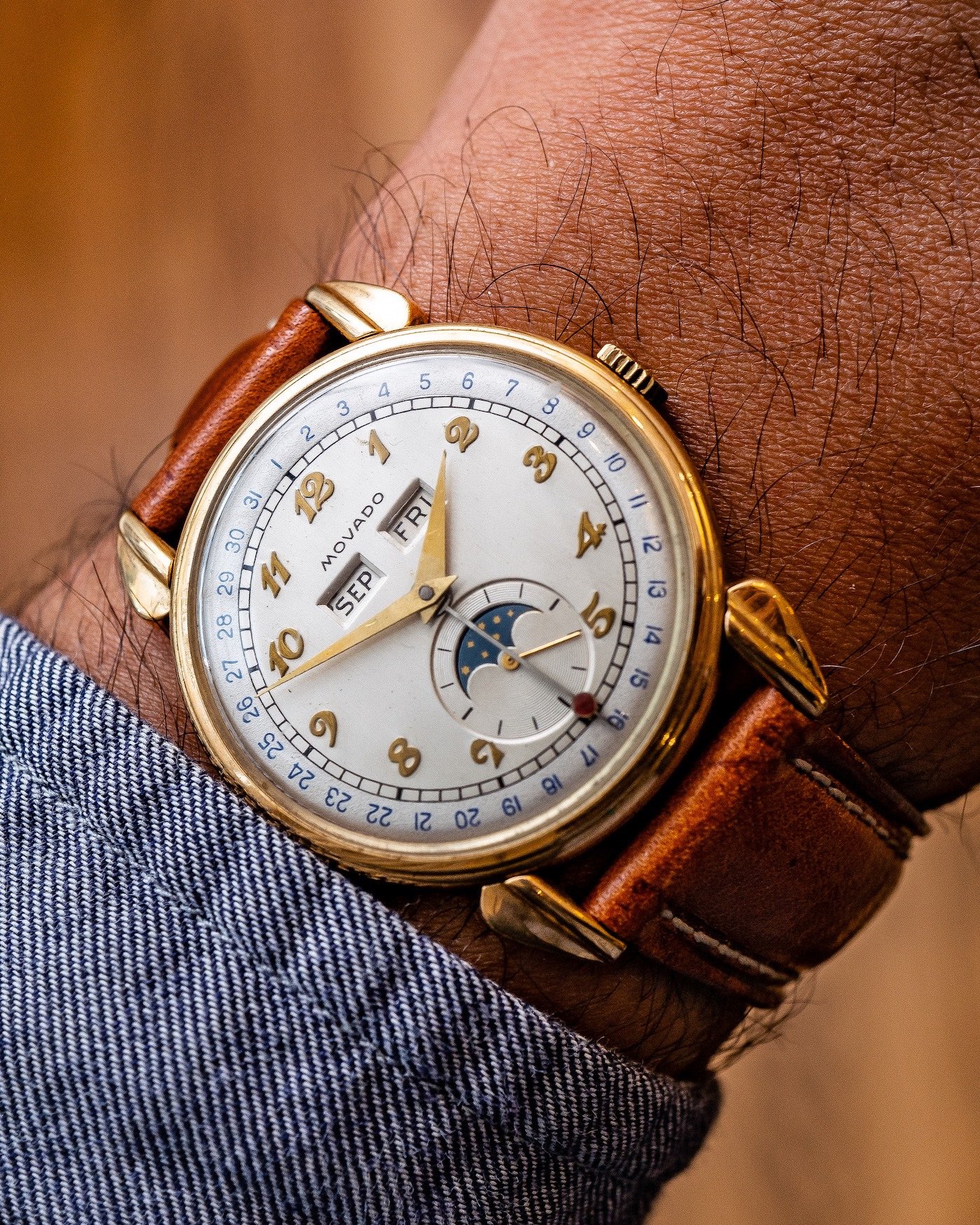 The second calendar watch is the more elaborate Movado Gentleman’s “Celestograph” C 476142 44929 that was made in 1950. First and foremost, I’d like to say: those lugs. The long lugs are distinctly architectural but with curves and rounded edges. Maybe it’s just me, and these are not for everyone, but I think these are some of the best lugs done by anyone.

The Celestograph watch can be seen as the upgraded sibling of the slightly older Calendograph, due to the fact that, in addition to the day, date, and month, we see the arrival of a moon-phase indicator. Where the case of the Calendograph you saw before is actually done in gold, as well as steel, this Celestograph is in a solid 14k gold case. The more decorative applied Arabic hour numerals are joined by the red-tipped lollipop date-indicator hand. The bezel is also quite thin here, and the case is tiered along the sides. The Cal. 473 movement didn’t have a very long production life, being introduced in 1947 and ending production in 1954. Continuing the tradition of movements spelled slightly differently than the models, this “Celestograf” with calendar manual-wind movement operated at 18,000 vph. 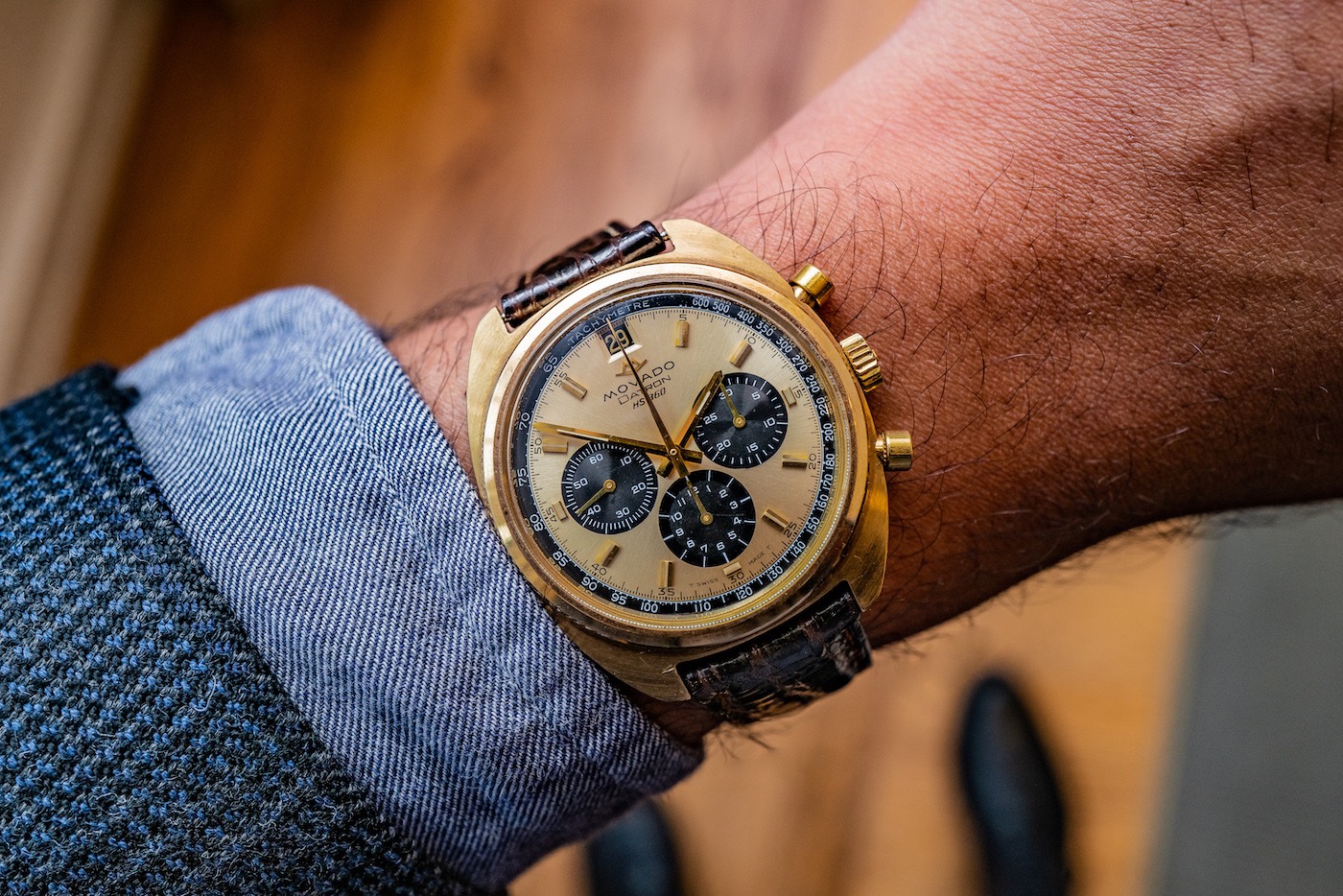 By this point, we all know about the Zenith El Primero being the first (yes) automatic chronograph, introduced in 1969. At the time, Zenith and Movado were both owned by MZM (Mondia Zenith Movado) Holdings, and the 3019 PHC movement that would later be named El Primero was outfitted in some pretty spectacular Movado pieces. With identical specs of 36,000 vph, ball-bearing rotor, and 17- jewels, there was one difference that distinguished the Zenith El Primero from the Movado Datron HS 360. Rather than a date window between 4 and 5 o’clock, the Movado iterations had it at 12 o’clock. 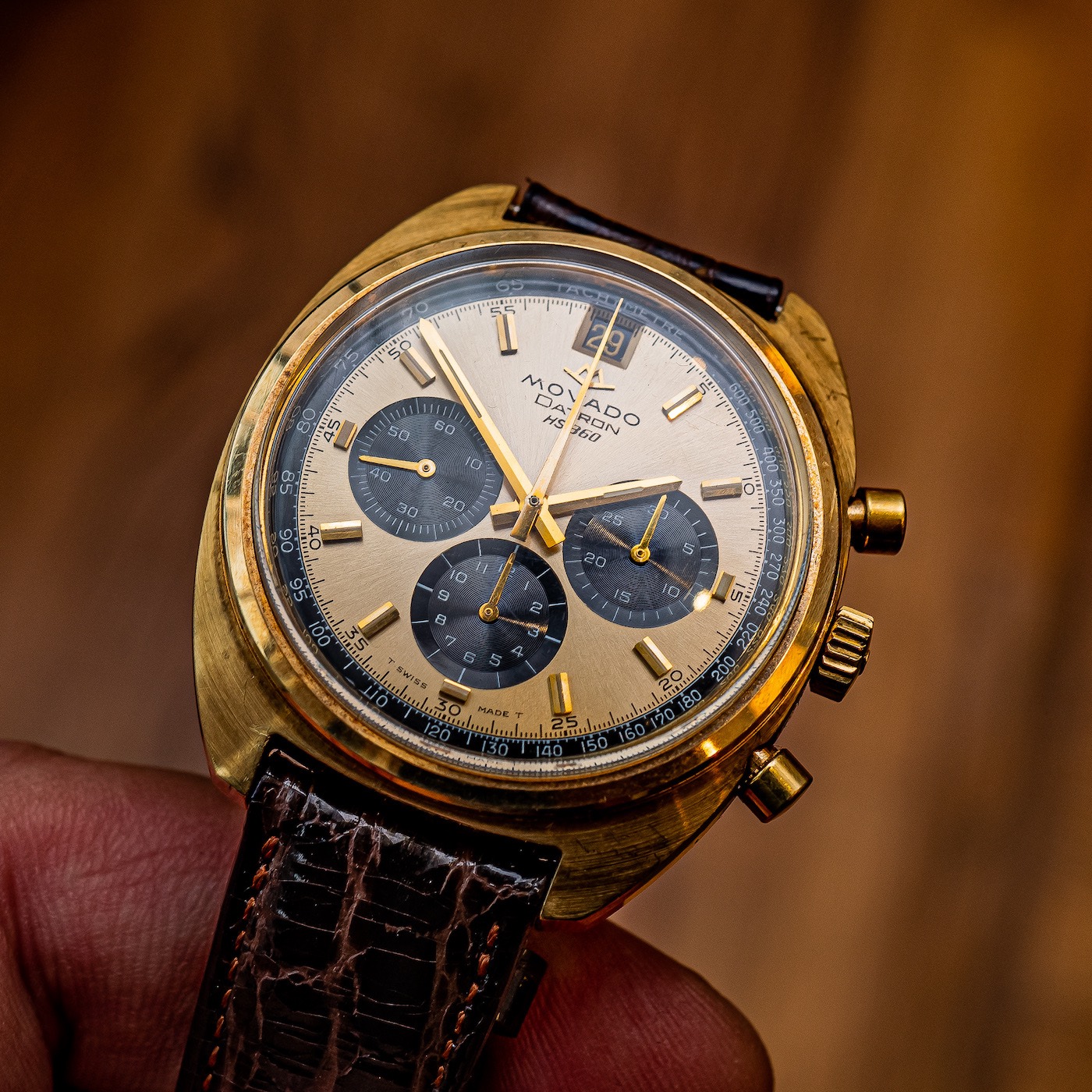 The Movado Datron HS 360 Ref. 434 225 502 is peak retro. The 37.5mm-wide case is done in 14k gold, while the dial is gold-plated and finished with a brushed sunray pattern. Other than the black, guilloché sub-dials, just about everything on the dial is some tone of gold. This model was released in 1970 and relies on genuine charm that actually may translate, at the least, into a reissue version. Even so, I couldn’t leave it out. 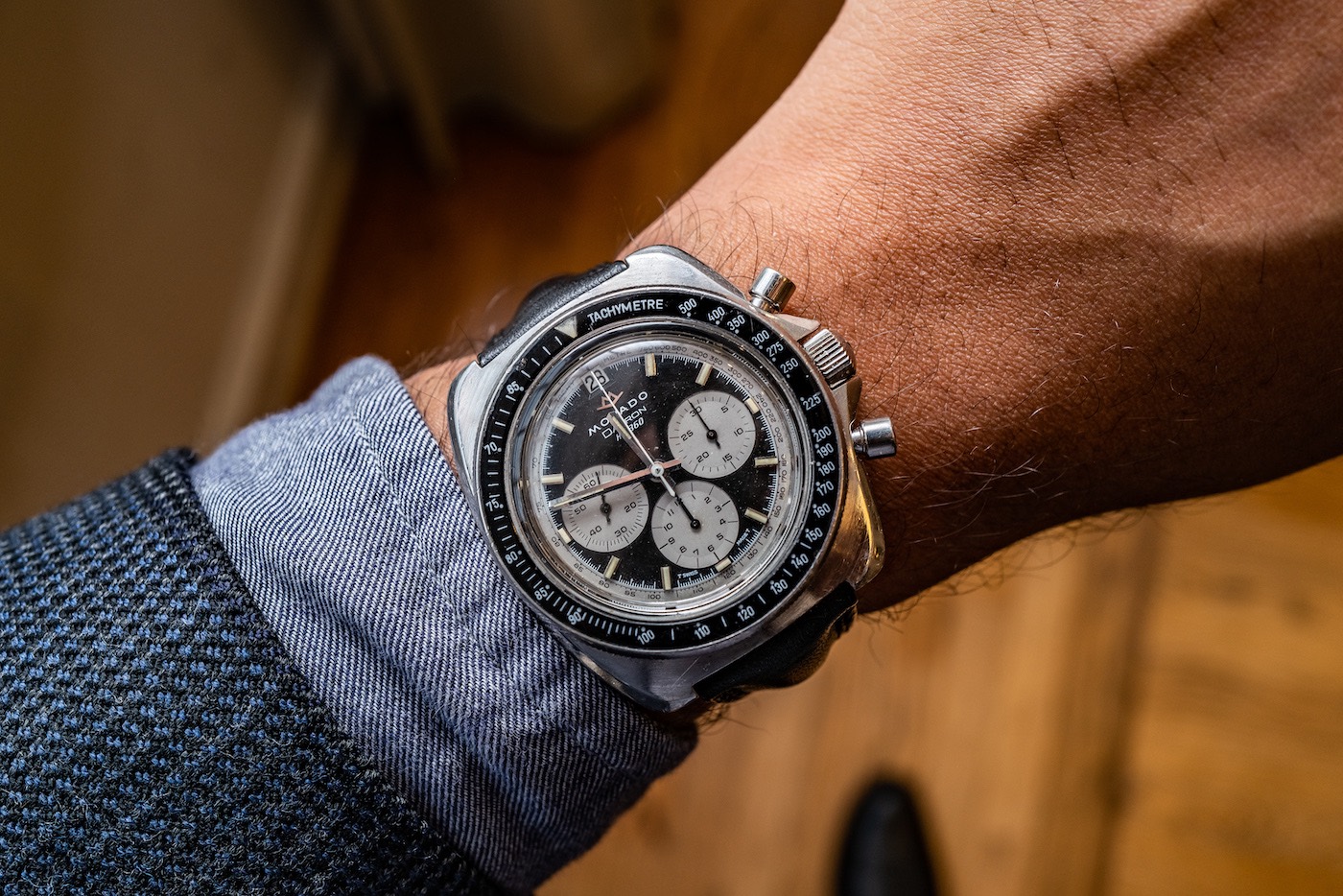 “Underappreciated” probably doesn’t begin to describe these two Movado Datron HS 360 “Chronodiver” watches. Introduced in 1970, these steel chronograph divers are overshadowed by the equally compelling “Super Sub Sea” models, but I am all about the aggressive case shape and 43mm-wide case size of these. Water resistant to 100M, the Chronodivers are, thankfully, not obscenely chunky at just under 15mm-thick. 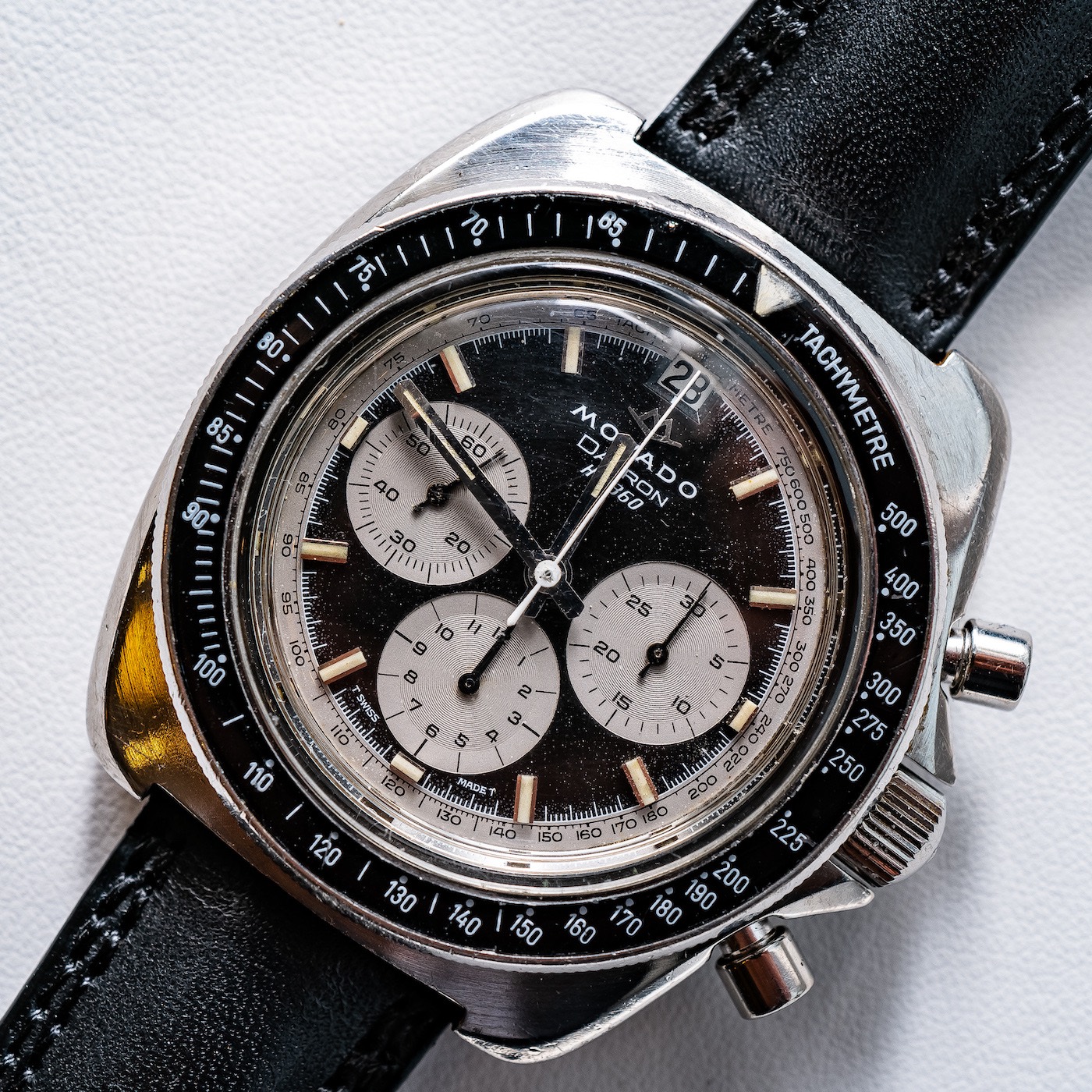 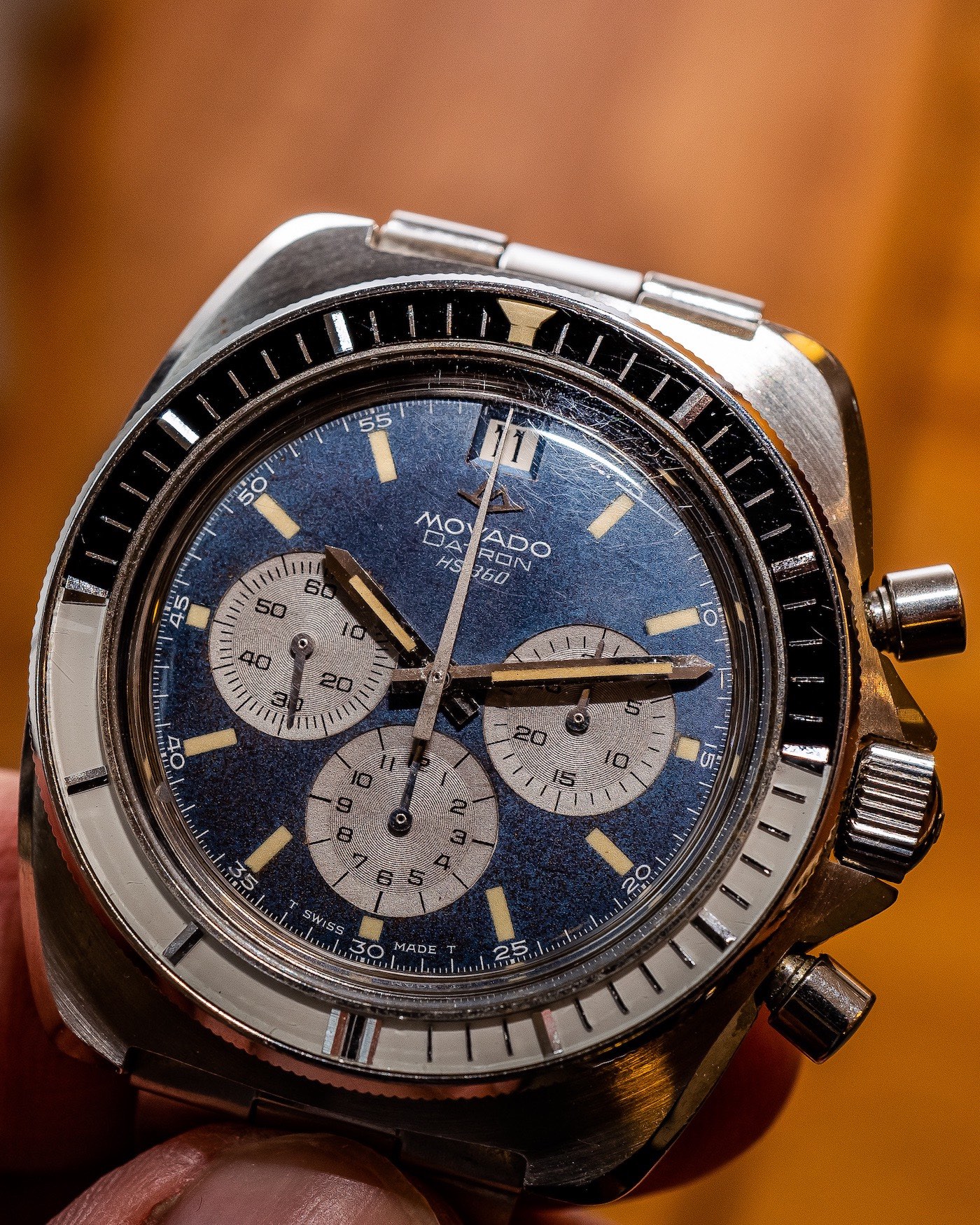 The panda dial model with solid black bezel has a strong no-nonsense attitude about it, but the blue-dial variant with black and blue bezel (ref. A 34705 501) captured my attention immediately. 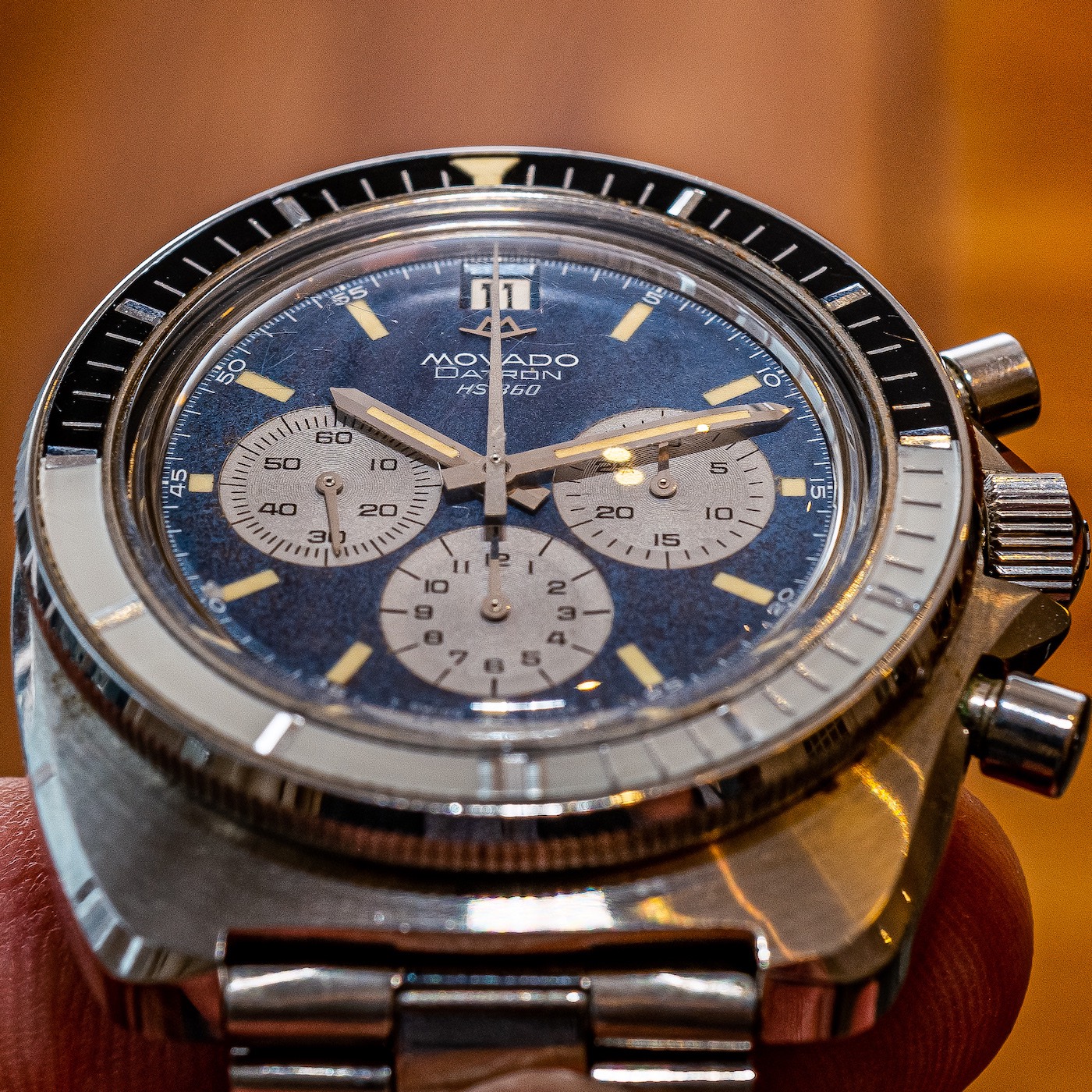 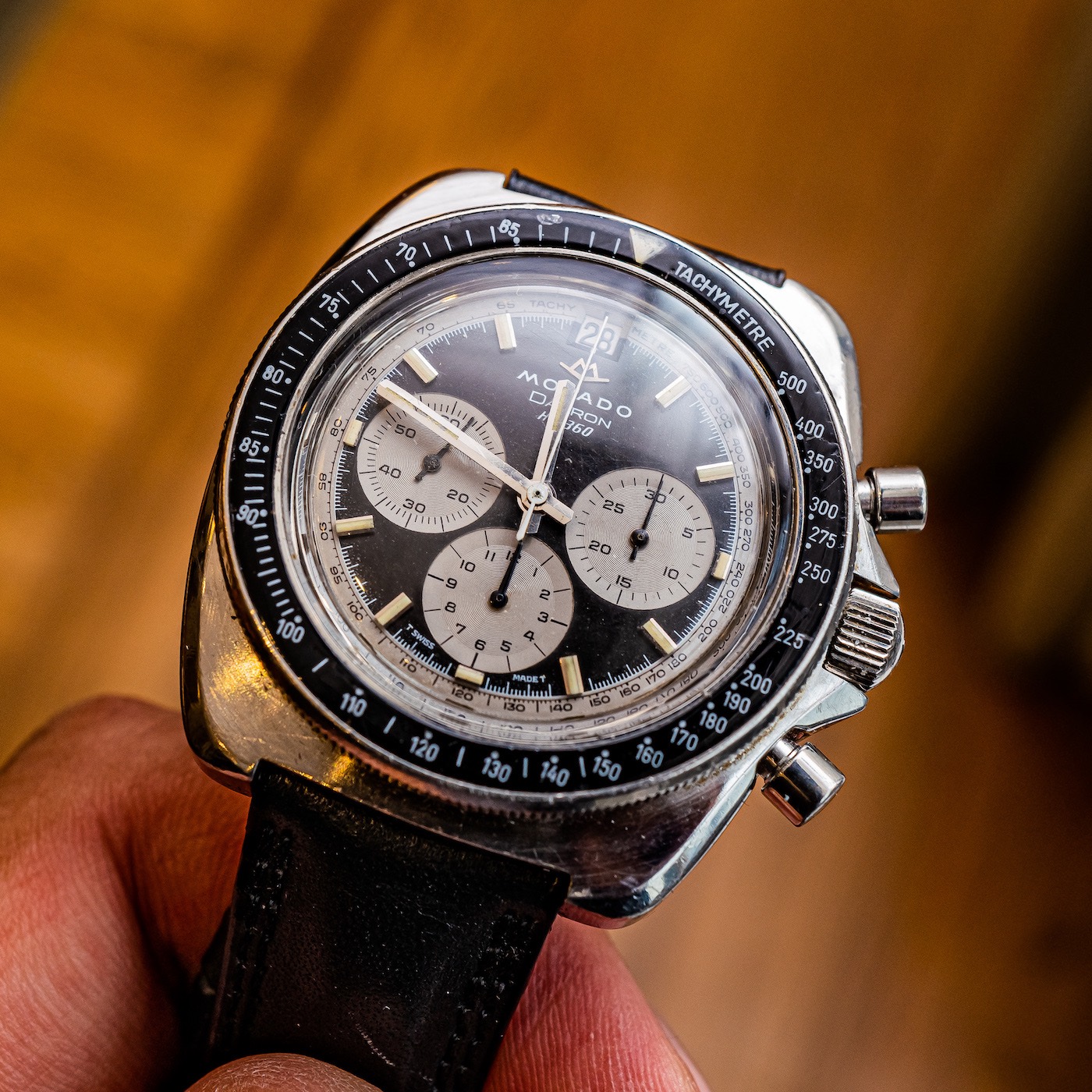 Movado really had a strong sense of what a sport watch should be when it was producing the Chronodiver, but does equally as much when it comes to the world time watches and calendar watches I’ve shared in this article. Of course, the Museum watch is the brand’s most iconic and recognizable modern watch, but there is a rich and impressive history in the brand’s past. I’d call it a sleeping giant.