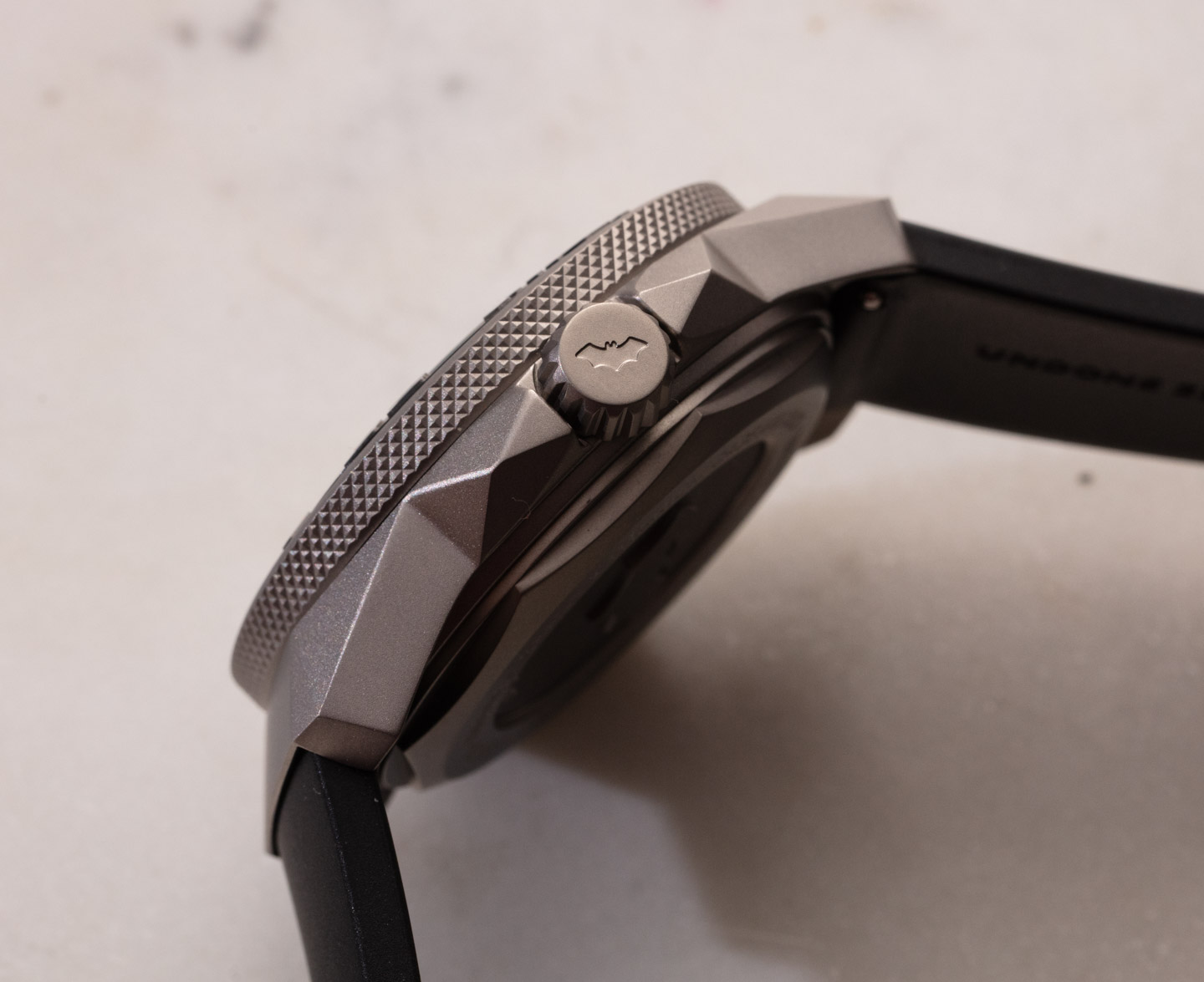 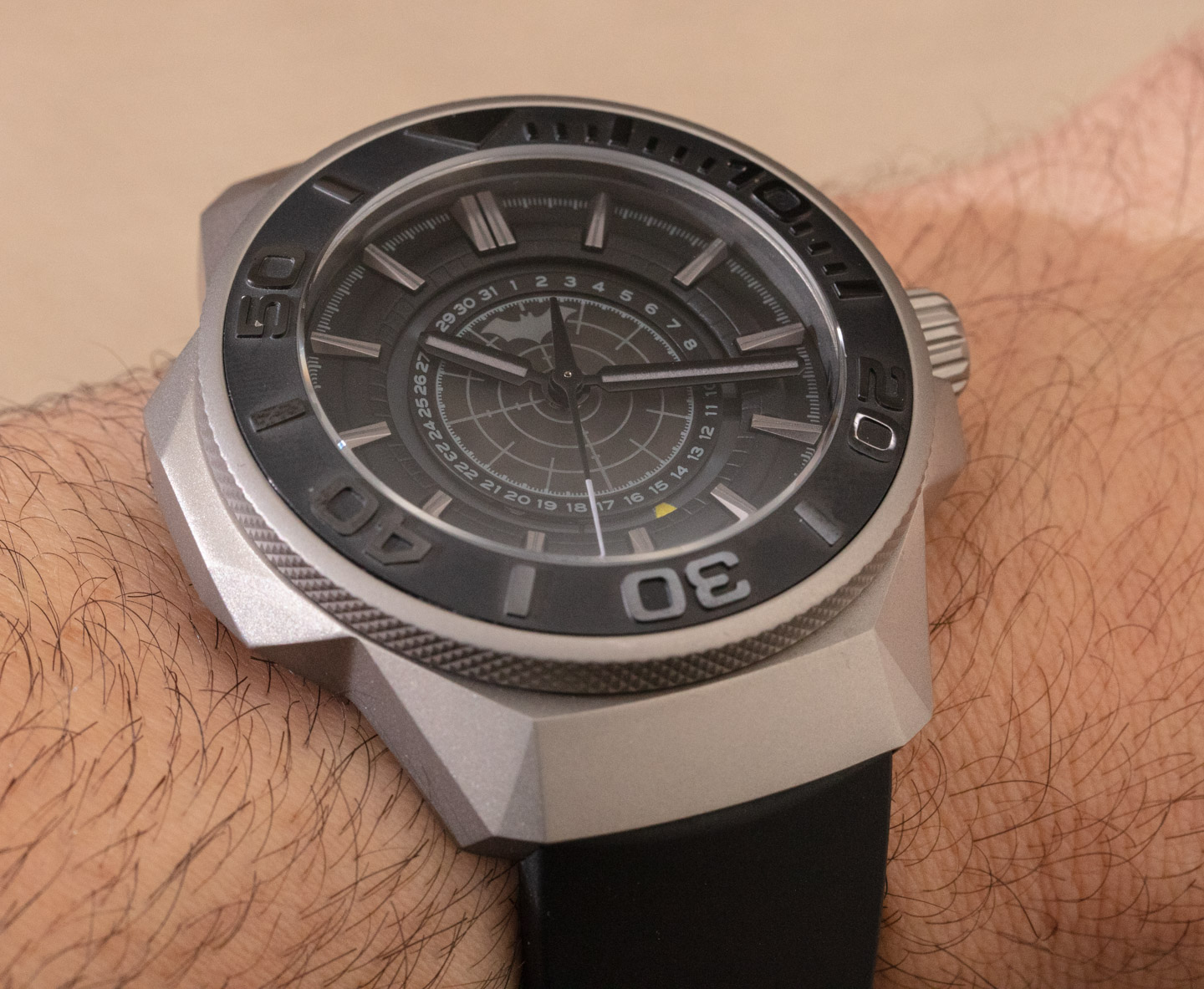 In 2020, the comic book superhero-themed wristwatch is nothing new. Even though today’s vast majority of superhero watches are based on characters who are more than 10 years old, only recently has the intersection between fashionable timepieces and culture’s big appetite for powerful extra-human characters come together in a watch that has resulted in a lot of very successful watches (and some not so successful ones). When done right, a superhero-themed timepiece should either pleasantly remind you of the character or universe you like, or actually feel like something that character should wear. Unsuccessful themed watches simply feel like superficial souvenirs available at theme park gift stores.

Today, I look at Hong Kong-based UNDONE’s second Batman-themed watch. The first Batman watch from UNDONE (no stranger to character licensed watches) was done to celebrate the 80th Anniversary of Batman — and we covered it on aBlogtoWatch here. There were two of the watches actually and it was also the first time UNDONE had used titanium in a watch case. Batman, from the DC Comics universe, has been the subject of many timepieces and the popular Rolex GMT-Master II with the blue and black bezel was nicknamed “Batman” due to its colors. What I think is interesting is that watch collectors want to connect timepieces to Batman even when the watches have nothing to do with him. Over the years, Batman has been presented in several styles and colors that offer ample opportunity for the imagination. Unless there is an actual Batman logo on the dial — which is the case with the UNDONE Batman Quantum. 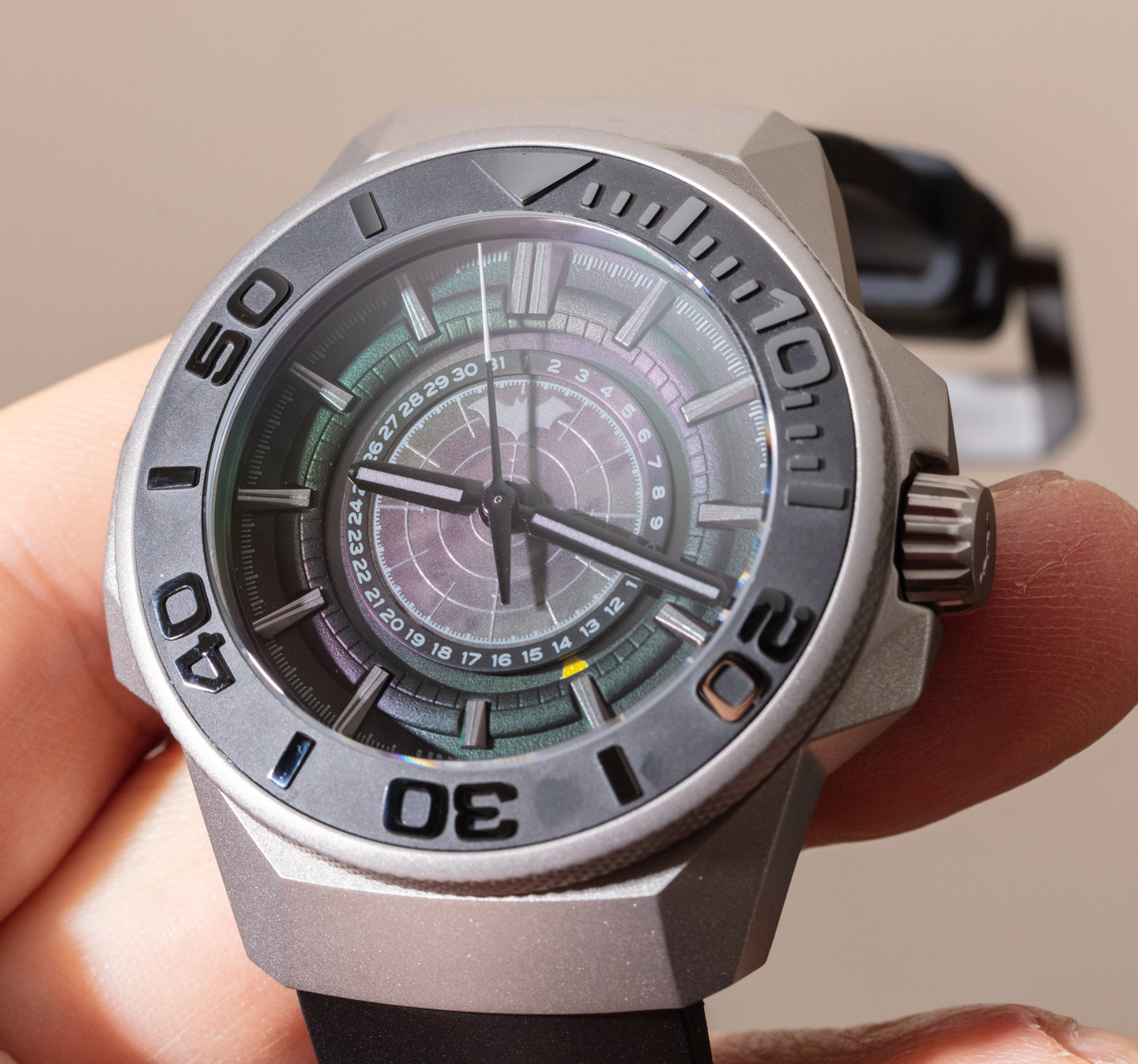 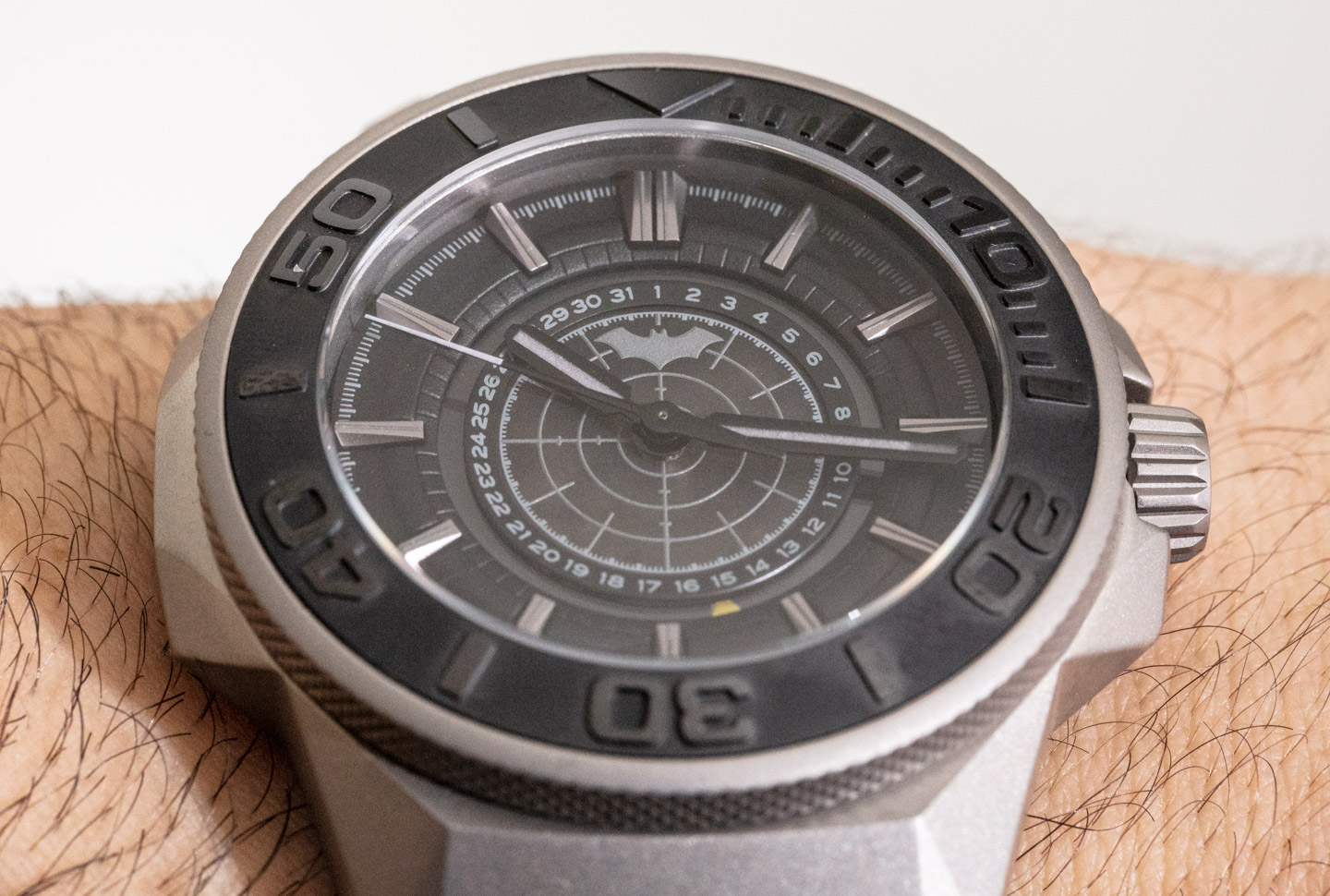 aBlogtoWatch first introduced the UNDONE Batman Quantum watch here. In that article, you’ll read about the timepiece from UNDONE’s perspective, learning what inspired the timepiece and what the brand hoped to achieve with it. After wearing the watch, I am now going to tell you if this is just another officially licensed opportunity to bank in on Batman popularity, or something with real timepiece and design merit.

What UNDONE doesn’t mention on its website is that the Batman Quantum is actually an evolution of the Aqua Automatic diver’s watch collection. The UNDONE Aqua and Batman Quantum do not actually have that much in common, visually, with the exception that the black ceramic “Yachtmaster-style” bezel on the Batman Quantum is also available on Aqua models. You can see it being used on the UNDONE Aqua watch I designed — which I called that Aqua Black & Yellow. Perhaps I was designing a Batman without even thinking about it? The Batman and Aqua also share the movement, a Japanese Seiko NH35A automatic movement that operates at 3Hz with about two days hours of power reserve. The Aqua and the Batman might also share the same curved sapphire crystal over the dial. Otherwise, aside from sharing similar case dimensions, the watches are rather distinctive from each other. 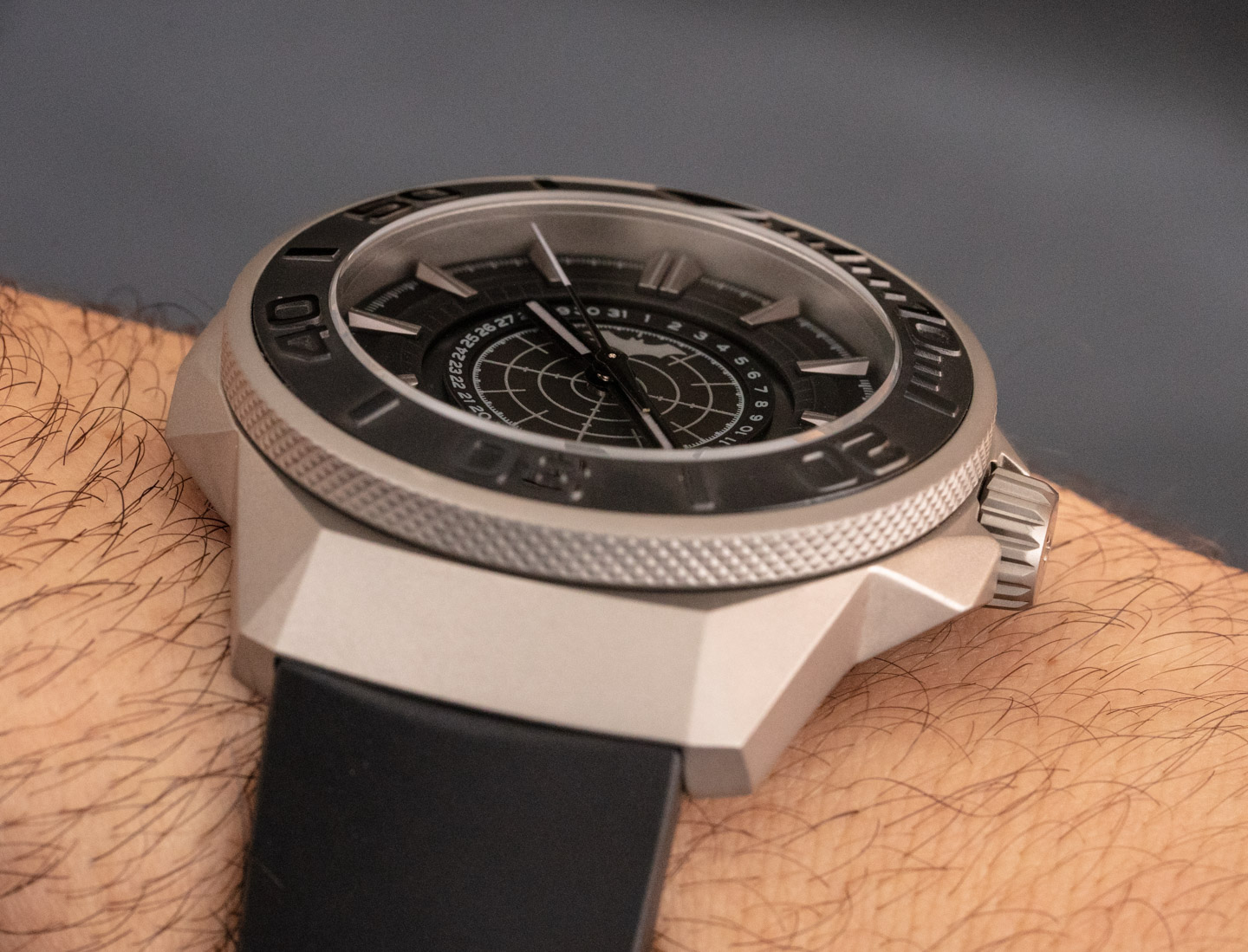 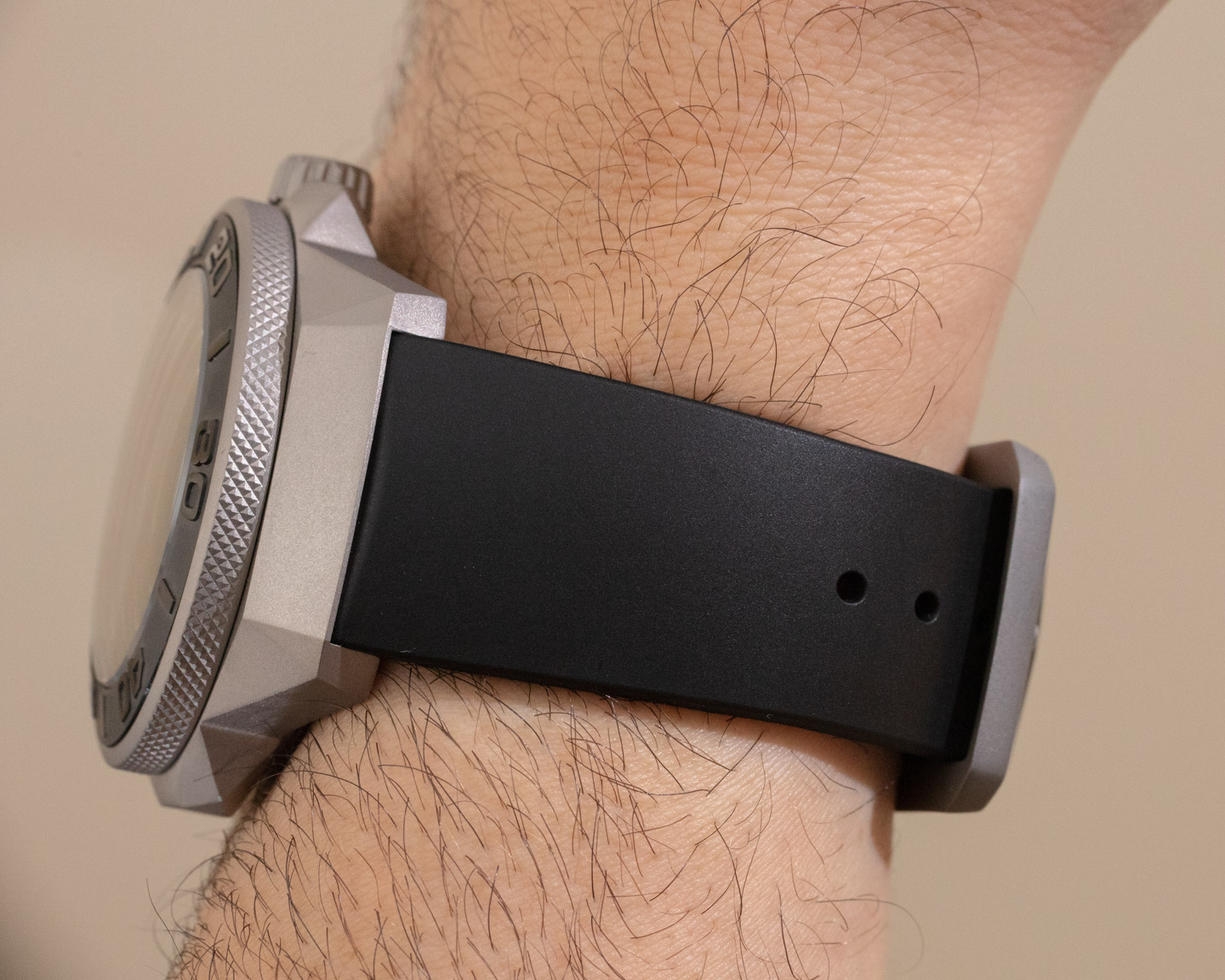 Speaking of the case dimensions, the satin-finished titanium case is 43mm-wide, (50mm-wide with the crown and side flank), and 16.25mm-thick. The case is also water-resistant to 200 meters with a screw-down crown. Given the particular design of the lugs where the strap attaches underneath it, I would say that wearability and comfort while wearing is very good, even for smaller wrists such as my own. At heart, this is still a diver’s style watch, and the uni-directional rotating timing bezel and overall wearing bulk attest to that.

UNDONE did a lovely job designing the Batman Quantum watch case — which, to me, is the most inspired part of the watch aside from the dial. UNDONE took inspiration from a galaxy of Batman vehicles and gadgets for the case and overall design of the watch, and it very much feels like a slick amalgamation of Batman “stuff” from the last 30 or so years. I particularly like the angularity of the case and how it creates a familiar profile to the watch lovers’ eye, but when inspected closely offers a lot of new parts. Just look at the detailing on parts such as the crown, caseback, and strap buckle to see that in action. 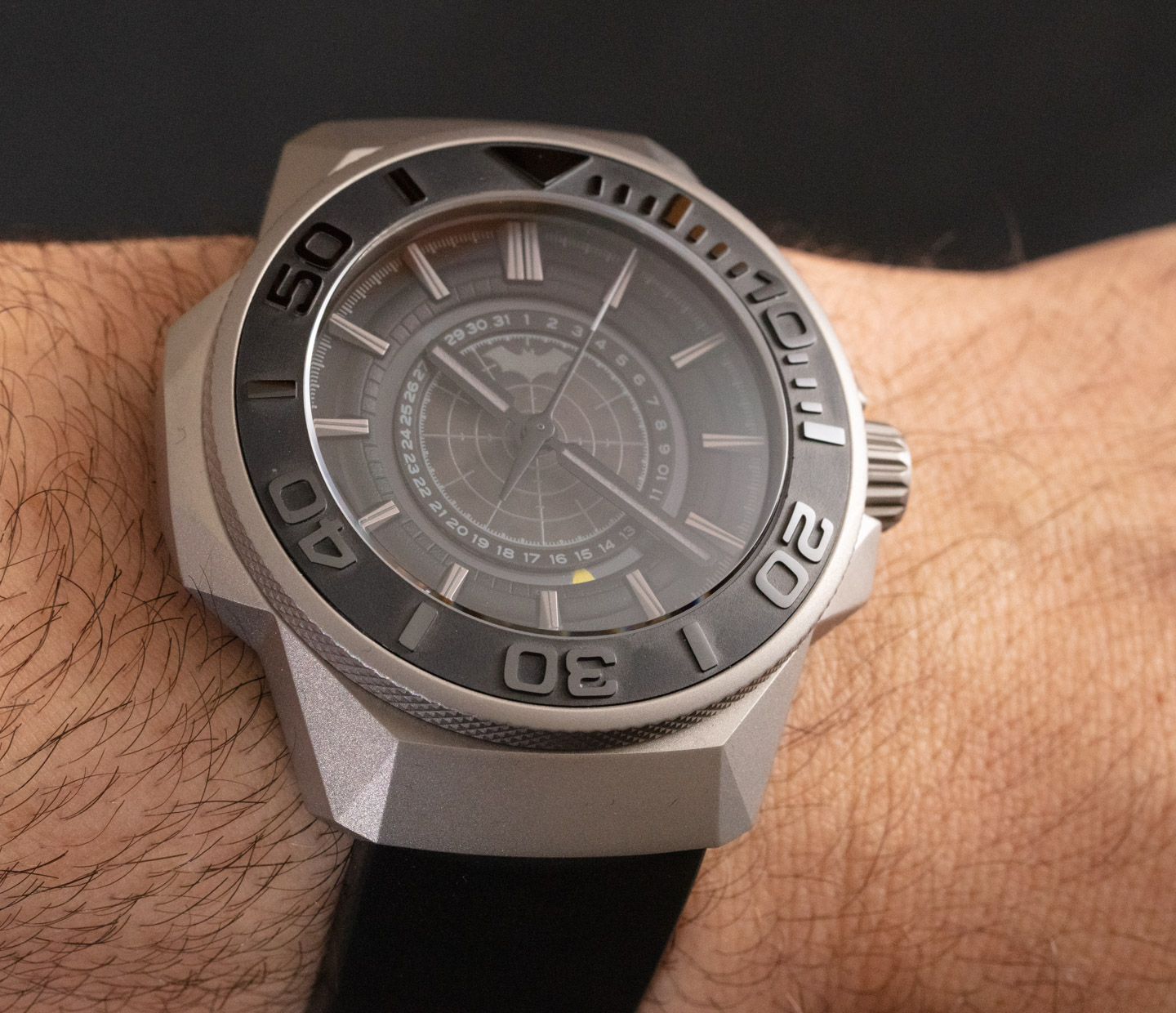 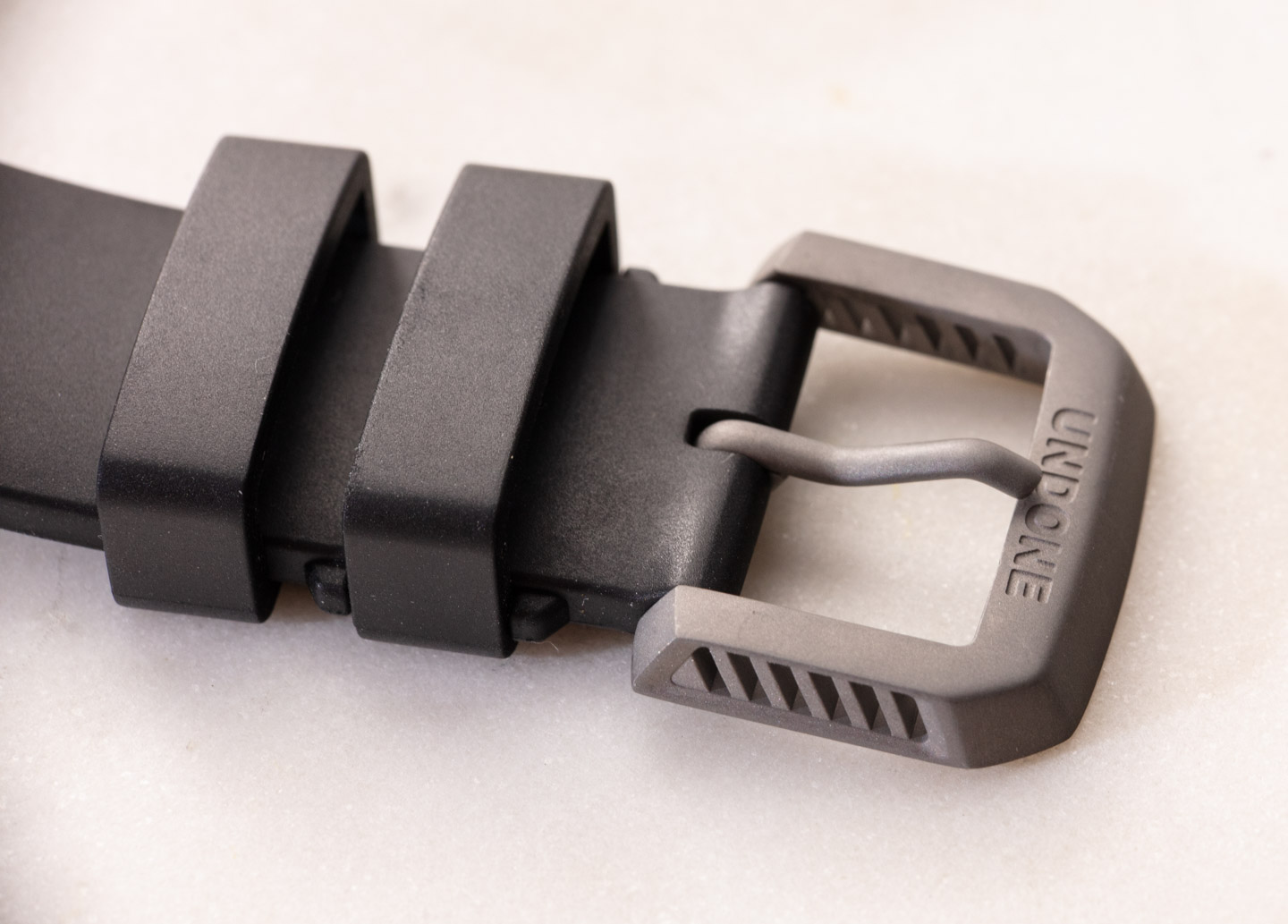 Despite Batman’s reputation as a night fighter, the Batman Quantum watch is more of a daytime piece. This is because the black/gray dial is cool but harder to see in low light. There is luminant, but since it is “black” luminant, it doesn’t glow like lighter colors. The dial is also replete with cool little details such as the semi-transparent inner dial that offers a view of the mechanical movement as well as the modified date indicator which was cleverly turned into a form of “pointer date.” Again, in design, the Batman Quantum dial is really cool, but it requires sharp vision and good lighting to appreciate its detail.

When the Batman Quantum watch was launched, UNDONE offered two versions. One is this “standard” non-limited edition UNDONE Batman Quantum in natural titanium, and there is also a limited edition of 500 pieces version for about $150 USD more that has a DLC-coated black-colored titanium case and that comes with a fancier presentation case. This standard version is not a limited edition and is probably what most people will gravitate to given the lower price and the mere fact that, in natural titanium, the case angles and design are a bit more visually apparent to the eye. That said, an all-black Batman watch is certainly going to be appealing to a lot of Batman and watch fans, for sure. 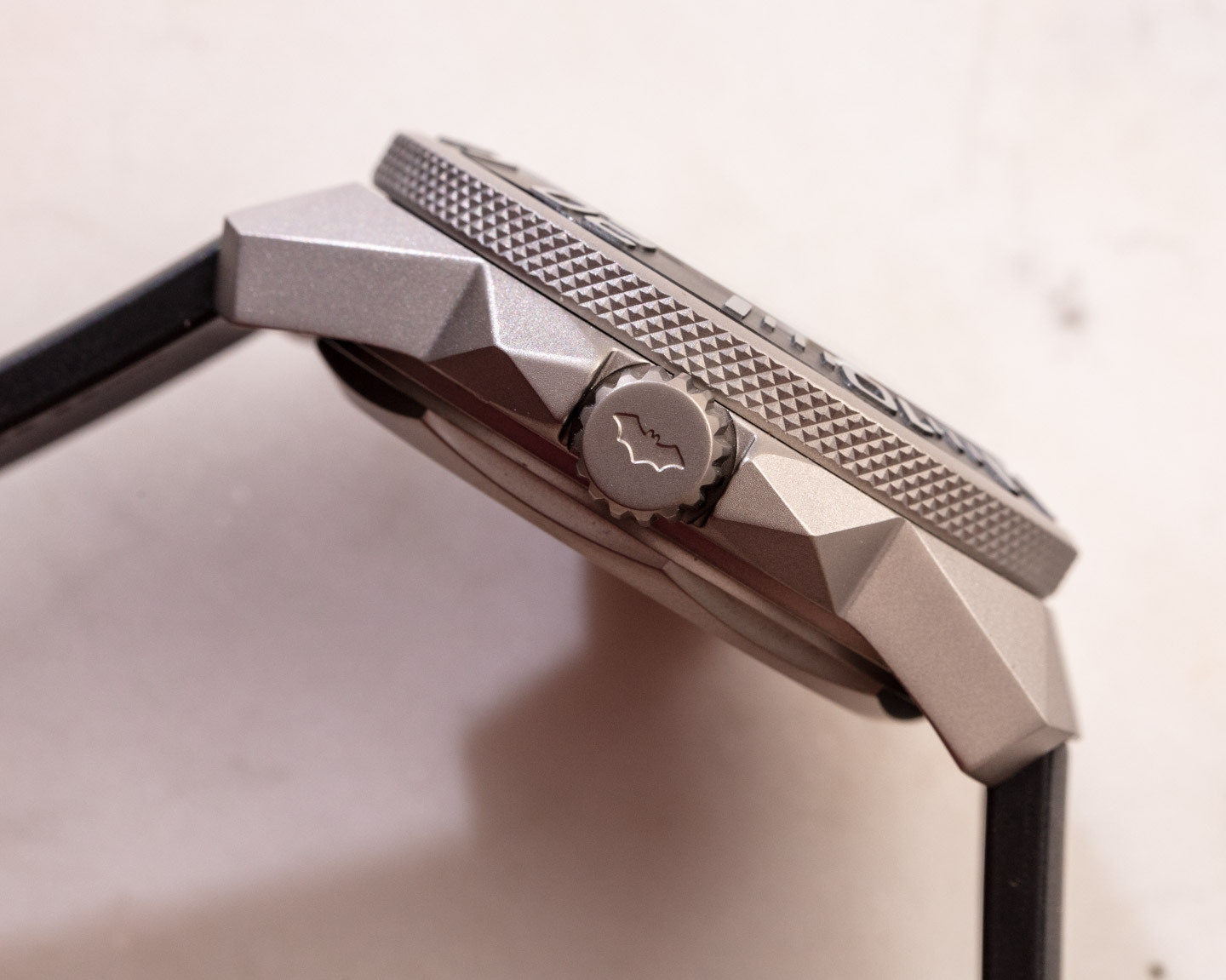 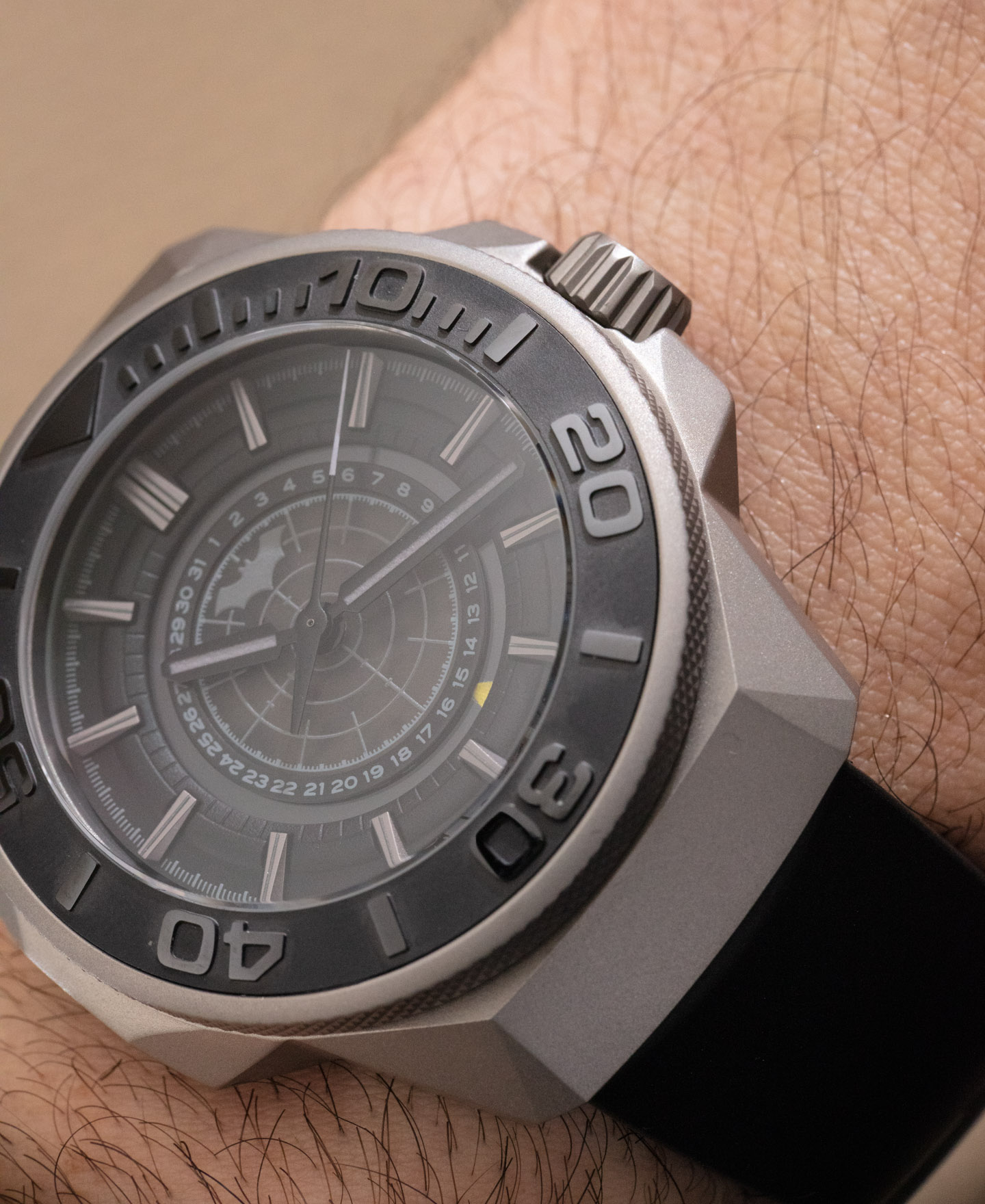 I know more than one watch lover who is also a serious fan of the Batman universe. I think the appeal of  Batman is the fact that the Bruce Wayne character is human in the stories and gets his powers from tools, tech, and intellect. No doubt, this makes Mr. Wayne a bit more relatable, even if most people aren’t child billionaires too. The “Quantum” part of the name comes from a Batman universe piece of tech called the Quantum Radar, which takes the mobile phones of ordinary citizens and creates a mesh network of sonar/radar for Batman to see everything that is going on in the city. Information is power and so are tech toys and gadgets. Batman and the common watch lover both seem to share that opinion. Price for the UNDONE Batman Quantum standard edition watch is $650 USD. You can learn more at the UNDONE website here.